Pulmonary embolism (PE) is the most common preventable cause of hospital death and the number-one strategy to improve patient safety in hospitals (1,2). It is well known that there is a high risk of PE after surgery (1,2). The incidence of perioperative PE varied by type of surgical procedure, 1.6% for general surgery, 1.5–2% for thoracic surgery, 0.7–30% for all orthopedic surgical procedures (3,4). In a postmortem study, mortality associated with postoperative PE is as high as 28.9% (5). Various factors for venous thromboembolism (VTE) have been well established, including female sex, older age, active neoplasia, history of previous deep venous thrombosis (DVT) or PE, trauma, immobilization and infection (6). There is a large amount of clinical data documenting the safety and efficacy of routine thromboprophylaxis in patients undergoing surgery (1,7). However, bleeding complications cannot be ignored (8,9). Moreover, even with aggressive VTE prophylaxis, this event sill occurs and suggests other undefined factors may play a role in VTE occurrence (10).

Blood transfusion is a common event in patients undergoing surgery in an attempt to correct anemia and coagulation parameters during or after the operations. But Yeh et al. found that postoperative transfusion was associated with a worse outcome in pancreatic cancer patients with pancreaticoduodenectomy (11). Moreover, blood transfusion is demonstrated to be associated with an increased risk of VTE in cancer patients, due to its pro-inflammatory and immunomodulatory nature (12,13). However, the effect of intra-operative blood transfusion and PE is less frequently described. So, the aim of our study was to evaluate whether intra-operative banked allogenic blood product transfusions increase the risk of symptomatic post-operative PE.

We performed a retrospective study at Sun Yat-Sen Memorial Hospital, Sun Yat-Sen University between 1 January 2013 and 31 December 2016. Case subjects were in-hospital patients, aged over 18 years, with an objectively documented symptomatic PE after a surgical operation. The diagnostic criteria for PE were either: (I) a positive helical computed tomography with a central filling defect outlined by contrast material or a complete occlusion in a segmental or more proximal pulmonary artery; or (II) a pulmonary angiography with an intra luminal filling defect or a sharp cut-off in a vessel at least 2 mm in diameter. Patients who had previously diagnosed as PE or preoperatively diagnosed as symptomatic PE by helical computed tomography or pulmonary angiography were excluded. Forty clinically symptomatic and imaging-confirmed cases of PE after a surgical operation were identified. Each patient was then matched with two adult patients without symptomatic PE who underwent the same operation on the same day or within one week. If more than 3 patients had the same surgery on the same day, the nearest patients in the surgery opening time were chose. The same surgery is defined as having the same International Classification of Disease, 9th Revision, Clinical Modification (ICD-9-CM) code. Although considered, age and sex were not included in the matching process. Matching on these parameters would prevent their use in the risk factor analysis.

A retrospective observational cohort study was used. We reviewed the medical records of all the patients in detail. Detailed blood transfusion data were collected on all transfused patients including product type and amount. Others including demographic, information on comorbid diseases, medications, surgical procedure, operative time, type of anesthesia, electrocautery and 30-day post-operation mortality during surgery were also recorded.

Continuous variables were described as means ± SD. Means were compared using Student’s t-test. Medians and comparative analysis were executed with Mann-Whitney U test, Kruskal-Wallis test, or chi-square test when appropriate. Potential risk factors for perioperative thromboembolic events were assessed using conditional logistic regression, making use of the 1:2 matched-pair study design. All potential risk factors were evaluated by forward stepwise logistic regression analysis in a multivariate model (P for entry <0.05, for exit >0.10) used to identify perioperative predictors of PE. The results were reported as odds ratios (ORs) and 95% confidence intervals (95% CIs). All P values are 2-tailed and statistically significance was set at P<0.05. All statistical analyses were performed using the SPSS version 23.0.

Between 1 January 2013 and 31 December 2016, there were 188,512 surgical operations, of which 40 patients (13 males and 27 females) satisfied criteria for postoperative PE, resulting in an incidence of 0.02%. Pulmonary emboli were recognized at 3.5 days (median; range, 1 to 46 days) after surgery. Almost all of the patients were documented by helical computed tomography, except one by pulmonary angiography. Of the 40 cases, 10 patients underwent abdomen surgery, 7 underwent gynecological surgery, 6 underwent orthopedic surgery, 6 underwent cardiovascular surgery, 4 underwent breast surgery, 3 underwent thoracic surgery, 2 underwent cranial neurosurgery and 2 underwent urological surgery. Three patients in the case group underwent urgent surgery, while 5 patients underwent urgent surgery in the control group. 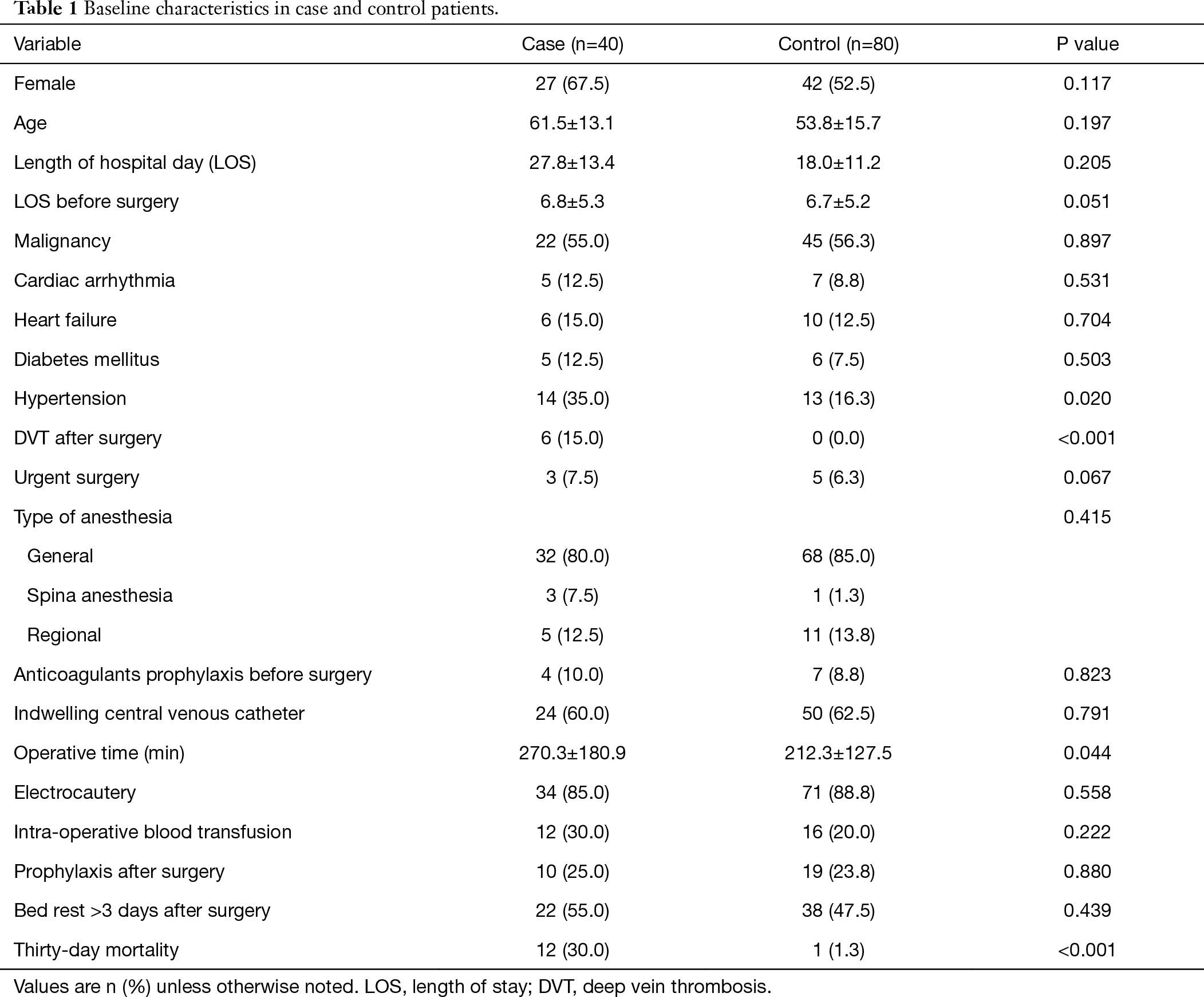 In this study, we reviewed cases of symptomatic PE after 188,512 consecutive surgeries at a single institution and found a low rate of symptomatic post-operative PE (0.02%). The median time between surgery and the diagnosis of PE was 3.5 days. This was consistent with other studies suggesting that PE mainly occurs during the first postoperative week (9,14,15).

There are many possible mechanisms that might explain for this phenomenon. Transfused blood, especially RBC blood transfusion can disrupt the balance of coagulation factors and modulates the inflammatory cascade (17). Storage of red cells can be associated with an increase red cell aggregability and abnormal morphology which might contribute to blood flow disorders (21). Normal mature RBCs do not interact with endothelium, but they become highly sticky when they have been stored longer, and this adhesion of vascular endothelium can contribute substantially to microvascular occlusions associated with thrombosis (22). With prolonged storage, oxidative stress increases and results in lipid peroxidation, protein oxidation and reduced integrity of the erythrocyte membrane-all contributing to the formation of extra-cellular micro-vesicles or ‘micro-particles (MP)’ and hemolysis (23). MPs are 0.1–1.0 µm in size and are released in blood flow by various types of cells (24). Hemolysis release free hemoglobin and heme that are toxic to many cells and tissues (22). Both MPs and hemolysis were associated with a reduction in vasodilation, platelet adhesion and aggregation, and exacerbation of inflammation (12,23). In addition, platelet MP might work synergistically with red-cell derived MP in mediating some transfusion-related thrombotic complications (25). The addition of plasma may also affect the coagulation balance by adding pro-coagulants. Nitric oxide (NO) also has a fundamental role in vascular health by regulating vasodilation, compromising blood flow, inhibiting both platelet aggregation and endothelial adhesion molecule expression (23). Reynolds et al. found that banked blood is severely depleted in NO which may lead to augment thrombosis, microcirculatory perturbations or injury in susceptible hosts (23,26). Moreover, massive intra-operative blood transfusion might mean more blood loss, leading to increased use of hemostatic drugs and further deterioration of coagulation and thrombosis.

Bed rest >3 days after surgery in our study was not associated with enhanced risk of PE development. However, longer length of stay before surgery was associated with increased risk of postoperative PE. Gillinov et al. also found prolonged preoperative bed rest as a risk factor for PE in the cardiac surgical patient (27). Greaves et al. analyzed 242,670 patients undergoing colorectal surgery and found that preoperative hospitalization was an independent risk factor for VTE and each day of preoperative hospitalization increased the odds of VTE (28). The longer preoperative period might contribute to the onset of PE by reducing mobility and causing venous stasis (28,29).

This study had several limitations. First, this study was a case-control review with a relatively small sample size, which might influence its generalizability. Nonetheless, the effect size was strong enough that a statistically significant impact of these variables could be detected. Second, the lack of a strictly matched design between the two groups made it difficult to balance all confounding factors. Third, length of storage was not available. Therefore, we cannot comment on the effect of transfusion of older units on development of post-operative PE.

Ethical Statement: The authors are accountable for all aspects of the work in ensuring that questions related to the accuracy or integrity of any part of the work are appropriately investigated and resolved. All procedures performed in our study involving human participants were in accordance with the ethical standards of the institutional and national research committee (SYSEC-KY-KS-2018-049), and with the 1964 Helsinki declaration and its later amendments or comparable ethical standards. For our study on patient data retrieved from hospital medical record system, an informed consent form is not required. The patient’s personal data have been secured.