During the last fifteen years, we have seen a substantial change of course in the scenario of thoracic surgery. The minimally invasive video-assisted surgical approach has spread in a gradually wider and more rapid way, being nowadays the treatment of choice for many thoracic disease traditionally managed by open surgery.

In this context, the uni-portal VATS plays a prominent role, representing the VATS with the least possible trauma for thoracic operations.

It has been performed a literature search using the following MeSH terms: “lung resection” AND “uni-portal VATS” AND “single port VATS”). The obtained papers were examined by both authors, which selected those to retrieve considering the titles (first exclusion process) and then the abstracts of the remaining studies (second exclusion process). Review papers were also searched for cross-references (Figure 1). We decided of considering exclusively those papers in English language and the search was carried out in March 2014. 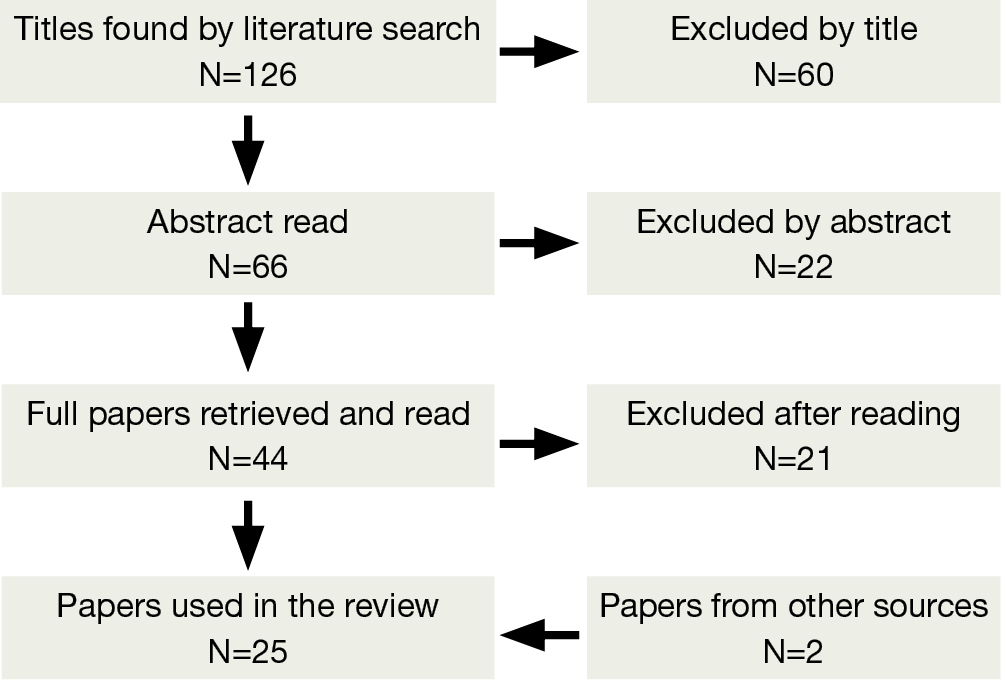 In 2004 Rocco et al. described for the first time a novel technique to perform pulmonary wedge resections through a single thoracic incision, with the assistance of a 5 millimeter thoracoscope (1). The theoretical and practical aspects of the so-called uni-portal VATS were more widely explained in two other papers published in 2005 (2,3) by the same group of authors.

The uni-portal approach for the treatment of thoracic diseases implies a substantial mindset change in comparison to the three-portal VATS, with consequent technical implications.

The single incision of the chest has a variable extent between 1 and 2.5 centimeters in relation to the different indications for the operation and eventually to the extent of resection. In any case the operative instruments as well as the videocamera lies in the same hole of the intercostal space, representing the fulcrum where they mutually move in. This fulcrum and the target lesion settle a unique plane, within which the surgical instrument and the thoracoscope operate. Changing the fulcrum point (varying the intercostal space, or the location in the same intercostal space) dependently to the target, it is possible to create infinite planes, able to reach virtually all the positions and lesions inside the chest cavity (1-4). As a result, this approach offers a considerable freedom of movement in spite of only one access point, that is further increased by the use of reticulating instruments and videocamera with 30 degrees vision. Figure 2 shows the different working planes and the strategy to reach the target lesion for the uni-portal and traditional three-portal VATS. 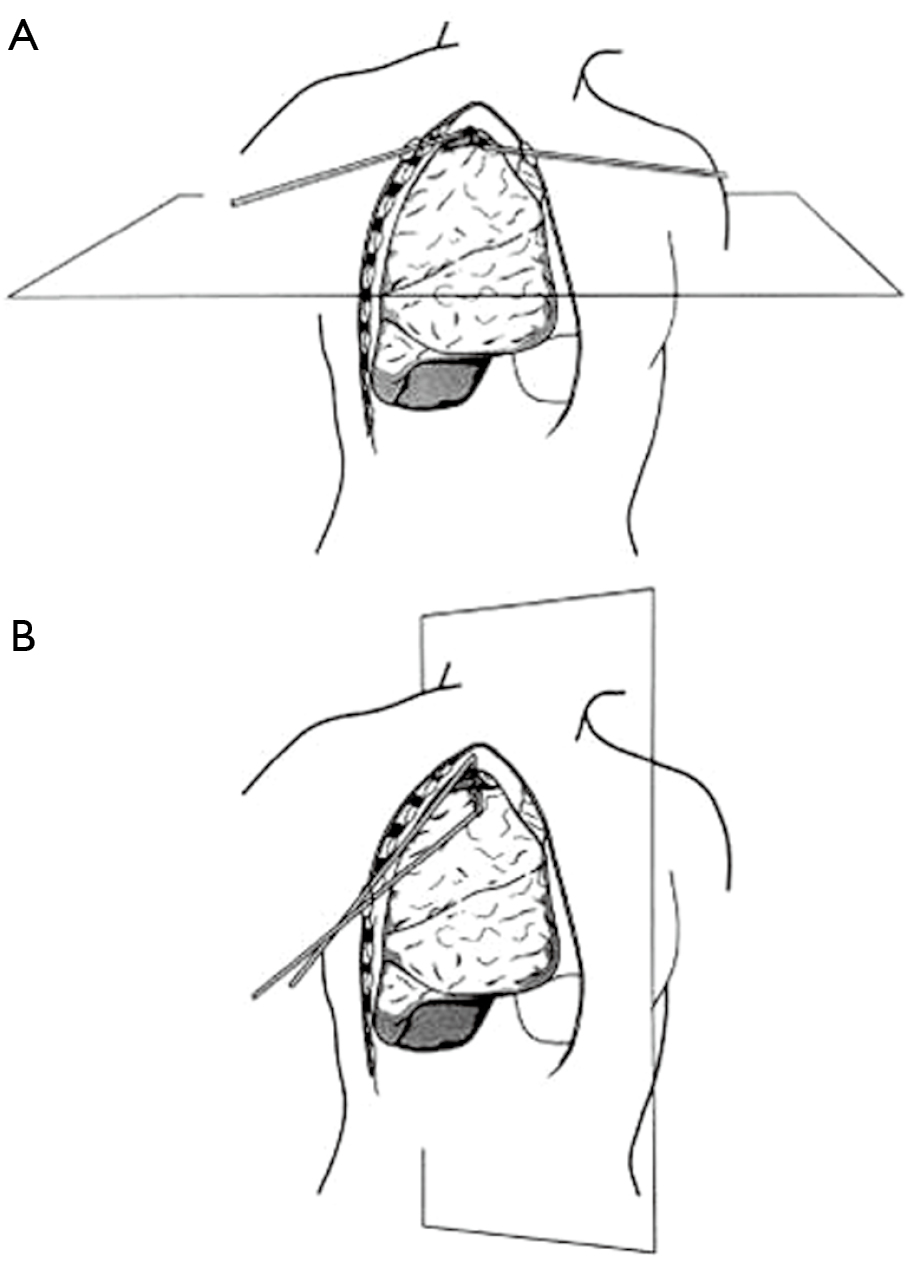 The geometrical and optical benefits of the uni-portal VATS have been recently described by Bertolaccini et al. (5). In 2013 they published a paper that describes the advantage of the uni-portal approach, offering a projective plane with a cranio-caudal perspective that maintain the depth of intraoperative visualization and a more intuitive instrumentation movement.

The first paper published by Rocco et al. about the use uni-portal VATS in 2004, described the feasibility of wedge pulmonary resection (1). The authors reported fifteen cases performed by a single port approach without complication intra- or postoperatively, and without any conversion to three-port VATS or thoracotomy.

Since then the indications of this technique have increased considerably.

In 2007 Rocco described the use of this technique for the sympathectomy in the treatment of hyperhidrosis (6). Chen et al. published in 2009 the results of a comparison between 20 patients submitted to video-assisted thoracoscopic sympathectomy by a single port and 25 treated by a bi-portal approach (7). For both groups the treatment was effective (hands warm and dry for all patients), without any conversion to a more invasive procedure for the uni-portal patients. Moreover the authors found a reduction of the operative time (uni-portal 39.5 min vs. bi-portal 49.7, P=0.02) and inpatient pain scores (uni-portal 0.8 vs. bi-portal 1.6, P=0.02) in favor of the uni-portal approach, with comparable results in terms of mean hospital stay, compensatory sweating, and patient satisfaction.

The uni-portal VATS was then used for performing wedge lung biopsy in order to obtain specific diagnosis in patients affected by interstitial lung disease, as reported by Rocco et al. in 2005 (3). They were able to perform a median of two lung biopsies for each of the 20 patient treated, obtaining a diagnosis that altered the therapeutic management in 14 of them.

In 2006 Rocco et al. reported the feasibility of pericardial window using an uni-portal approach (10). They described the technique to perform this procedure in four patients with malignant pericardial effusion, underlining the possibility of performing concomitant procedures (as mediastinal nodes biopsies) and the minimization of the patient discomfort.

In a paper of 2006 the uni-portal VATS was presented as a valuable technique supplementary to the conventional approach (mediastinoscopy, anterior mediastinotomy, three-port VATS) for the mediastinal nodes diagnosis (11). The authors described 13 patients operated by a single video-assisted access: the diagnosis was obtained in all cases (primary malignant nodal disease—5, secondary malignant nodal disease—6, granulomatous systemic disease—2), with a median postoperative hospital stay of 1 day.

The versatility of the uni-portal VATS technique made possible its use for the treatment of a patient affected by penetrating chest trauma (shotgun) (12). The authors reported the possibility of performing the procedure through the same incision of the chest tube inserted to evacuate the hemothorax. They were able to explore the entire thoracic cavity and remove the bullet situated in the costophrenic recess.

The last frontiers of implementation of the uni-portal VATS have made possible its use in the treatment of patients in an ambulatory setting without general anesthesia and in the execution of major anatomic pulmonary resections.

In 2010 and 2011 Rocco et al. described two different cases of pulmonary wedge resection performed through a video-assisted single access (13,14). Both patients received a mild sedation and an epidural anesthesia, moreover an intra-bronchial ballon catheter, bronchoscopically positioned, excluded from ventilation the lobe containing the target lesion. The authors performed the pulmonary resection using multiple endo staplers firings (resection of pulmonary nodule—first case and bullectomy for pneumothorax—second case), and they were able to discharge the patients the day after the surgical procedure. In 2014 Galvez et al. (15) confirmed the feasibility of the procedure, performing a metastasectomy of the left upper lobe without the necessity of endoscopic procedure for lobar collapse. It should be underline that the surgical incision was 5 cm long in this case.

In 2011 Gonzalez et al. reported a case of left lower lobectomy performed by a video-assisted single-port incision (16). This novel technique adopted several methodological aspects clearly stated by the uni-portal VATS and modulated them to perform anatomic major lung resection. The single access is 4 cm long and allows inserting all the operative instruments as well as the videocamera (usually 10-mm thoracoscope, 30-degrees), that is placed at the tail of the incision. The methodology and the operative steps of this novel technique were extensively described in a paper published in 2012, with specific annotation for each type of lobar resection (17). In the same year, Gonzalez-Rivas et al. published their initial experience of 23 patients treated by the uni-portal VATS lobectomy (18), showing a success rate of 87% with no mortality and a postoperative length of stay of about 3 days. Parallel with the refinement of the technique and the evolution of the operative armamentarium, the uni-portal VATS for major lung resection was applied for performing progressively more challenging operation, as anatomic segmentectomy (19), pneumonectomy (20), sleeve lobectomy (21) and pulmonary artery reconstruction (22).

From the first report published 10 years ago, the uni-portal VATS has greatly expanded its scope. The progressive refinement of the technique associated with a broader range of surgical instruments made possible the treatment of the vast majority of the pathologic intra-thoracic conditions (23), including the major anatomic pulmonary resections for primary lung malignancy (24).

Neverthless, due to its relatively recent description and implementation, this minimally invasive approach has the potential and the urgency to expand the scientific evidence about its benefits as well as to explore new areas of use.

In this sense, some papers have already demonstrated the advantage of the uni-portal VATS in comparison to the traditional multi-portal techniques. The reduction in postoperative pain and neurologic complaints was showed by more than one study which verified the uni-portal VATS outcomes in patients treated for primary spontaneous pneumothorax (4,8). Moreover it has been documented a faster postoperative hospital stay and recovery of daily life activities as well as a clear cost reduction in the same group of patients (4). At the same time, there is lack of large comparative or randomized studies aimed at verifying a reasonable positive effect of this minimally invasive approach on the above-mentioned outcomes and on the immunologic status of the patients, particularly in those submitted to major lung resection for neoplasm.

Finally, reflecting a constant evolution of the uni-portal VATS, this approach was also adopted to identify and resect peripheral lung nodules with the help of an articulating endoscopic ultrasound (25). This opens another scenario where the uni-portal VATS could play a prominent role, contributing at the identification and diagnosis of lung or mediastinal lesion not reached until now.

At the same time, it is desirable the growth of solid scientific evidence to confirm the advantages of this technique over the traditional approaches.