Cardiac rhythm disorders after heart transplantation (HTX) are frequent and may manifest in different ways either as tachyarrhythmias or as bradyarrhythmias (1-3). Common post-transplant bradyarrhythmias comprise sinus node dysfunction (SND) and atrioventricular block (AVB) which may require permanent pacemaker (PPM) (4,5). Bradycardic rhythm disorders after HTX are often transient and improve over time, with reported rates of PPM implantation after HTX varying between 3.5% and 20.5% (6,7). A large analysis of the United Network for Organ Sharing (UNOS) database showed that more than 10% of all patients received a PPM after HTX (5).

The initial standard technique for HTX, also known as the biatrial technique, has been associated with elevated rates of PPM implantation due to a continuous circular suture of the right donor and recipient atrium with possible sinus node injury (2,4,8-10). In contrast, the bicaval technique uses two donor-to-recipient vena cava anastomoses preserving the right atrial (RA) integrity and the sinus node (2,4).

Regarding the analysis of further risk factors, complications, and long-term outcomes of PPM implantation after HTX, there is only a minority of studies with a population of more than 500 patients and only one multi-center study investigating the need for PPM implantation after HTX (3-5,11-15). Additionally, studies yielded inconsistent results due to considerably differences in design, analyzed parameters, and length of follow-up. Moreover, the vast majority of the existing literature is outdated, as most studies were published in the 1990s (3,16-39) and in the 2000s (4,6,7,40-43).

Thus, given the need for new studies in this area of research, the aim of this large registry study was to investigate the risk factors, indications, perioperative outcomes and complications of PPM implantation after HTX as well as the underlying effect on post-transplant mortality including causes of death.

The performance of this study was in accordance with the ethical principles for medical research of the Declaration of Helsinki. Approval was given by the ethics committee of the University of Heidelberg (ethical approval number: S-286/2015, date of ethical approval: 22-06-2015). This study included all adult patients (≥18 years) receiving HTX at Heidelberg Heart Center between 1989 and 2018 except for patients with repeated HTX. Four patients with implantable cardioverter defibrillator (ICD) implantation after HTX due to ventricular tachycardia and no requirement for pacing were also excluded. Written informed consent was obtained from patients for inclusion in the Heidelberg HTX Registry allowing the clinical and scientific use of data. According to the ethical approval, no additional written informed consent was required for this registry study as only routine clinical data were analyzed (2,44-49).

Follow-up after HTX was performed according to the usual standard of care at Heidelberg Heart Center. As part of HTX surgery, patients received a temporary pacemaker system consisting of an external pacing box and two epicardial pacing leads which were placed on the right atrium and ventricle. The epicardial pacing leads routinely remained in situ for around 10 days after HTX. During the initial hospital stay, 12-lead electrocardiography (ECG) was regularly performed and in case of any suspected arrhythmic disorder. Before discharge, patients routinely had a 24-hour-holter-recording (2,44-49).

Patients after HTX initially received an anti-thymocyte globulin-based immunosuppression induction therapy. The initial standard immunosuppressive drug regimen at the beginning of the study period consisting of cyclosporine A (CsA) and azathioprine (AZA) was subsequently switched to CsA and mycophenolate mofetil (MMF) from 2001 onward. Since 2006, tacrolimus (TAC) and MMF were routinely used as initial immunosuppressive drug therapy. Steroids (prednisolone) were tapered incrementally during the first post-transplant months and discontinued finally 6 months after HTX if possible (2,44-49).

In addition, a multivariate analysis (Cox regression model) was conducted to analyze the influence of the following five clinically relevant parameters which were statistically significant in the univariate analysis between patients with and without PPM implantation after HTX: recipient age, recipient body mass index (BMI), recipient arterial hypertension, donor age, and biatrial HTX. In order to avoid biased regression coefficients and to ensure a stable number of events (patients with PPM implantation after HTX) per analyzed variable, we did not include further parameters in this multivariate analysis (2,44-49).

In patients with PPM implantation after HTX, data regarding device surgery and outcomes of PPM implantation after HTX were further investigated including type and position of PPM, perioperative data, perioperative complications, and causes of death within 5 years after HTX. Furthermore, a sensitivity analysis was carried out to test the robustness of the study results using a subgroup of patients with TAC and MMF as immunosuppressive drug regimen as the immunosuppressive drug therapy was switched from 2006 (2,44-49). 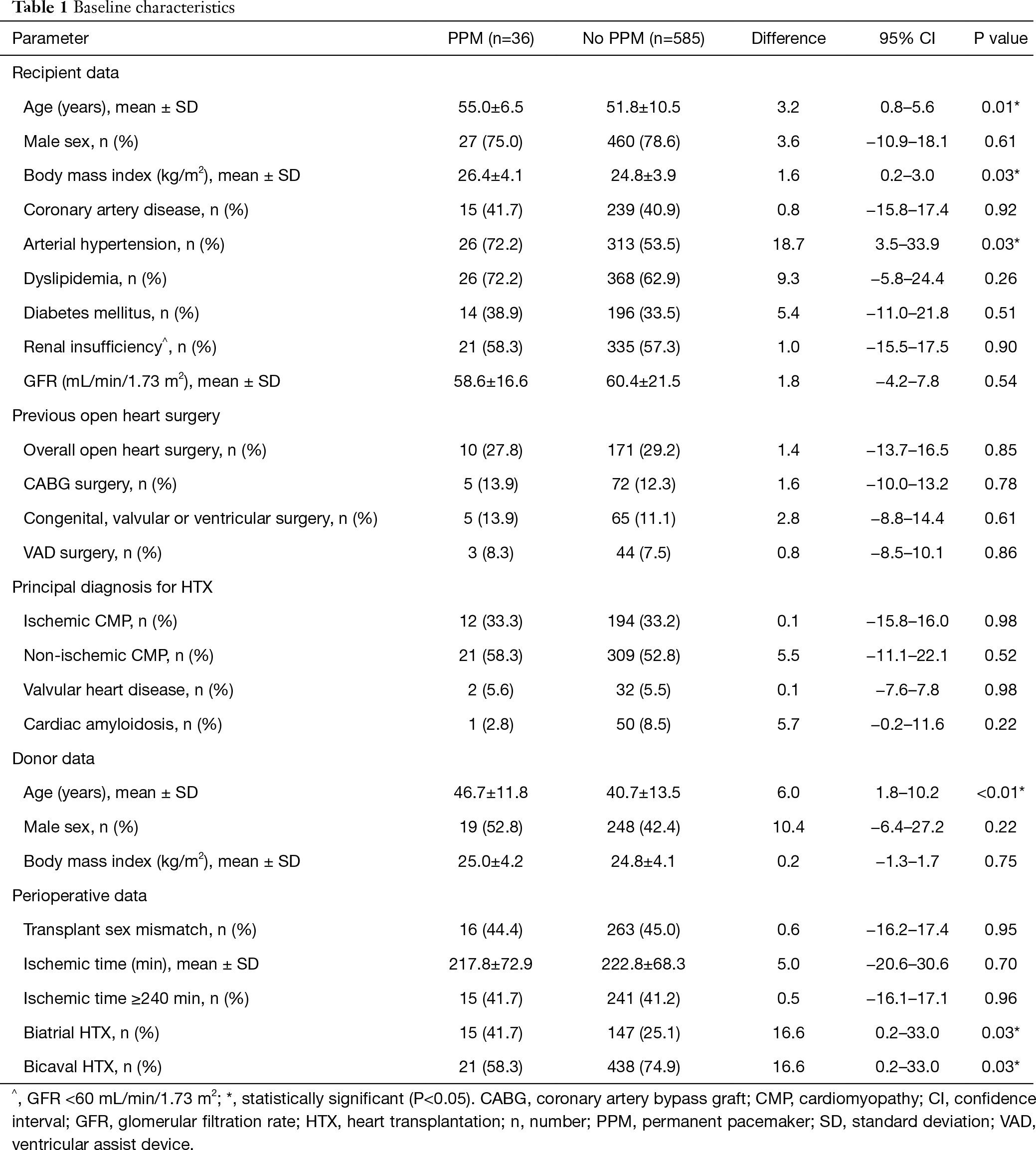 Comparison of immunosuppressive medication displayed no statistically significant differences between both groups regarding the use of CsA, TAC, Aza, or MMF. Additionally, there were no statistically significant differences in the administration of acetylsalicylic acid, beta-blockers, ivabradine, calcium channel blockers, angiotensin-converting-enzyme (ACE) inhibitors/sartans, or statins. An overview of the initial medication after HTX is given in Table 2. 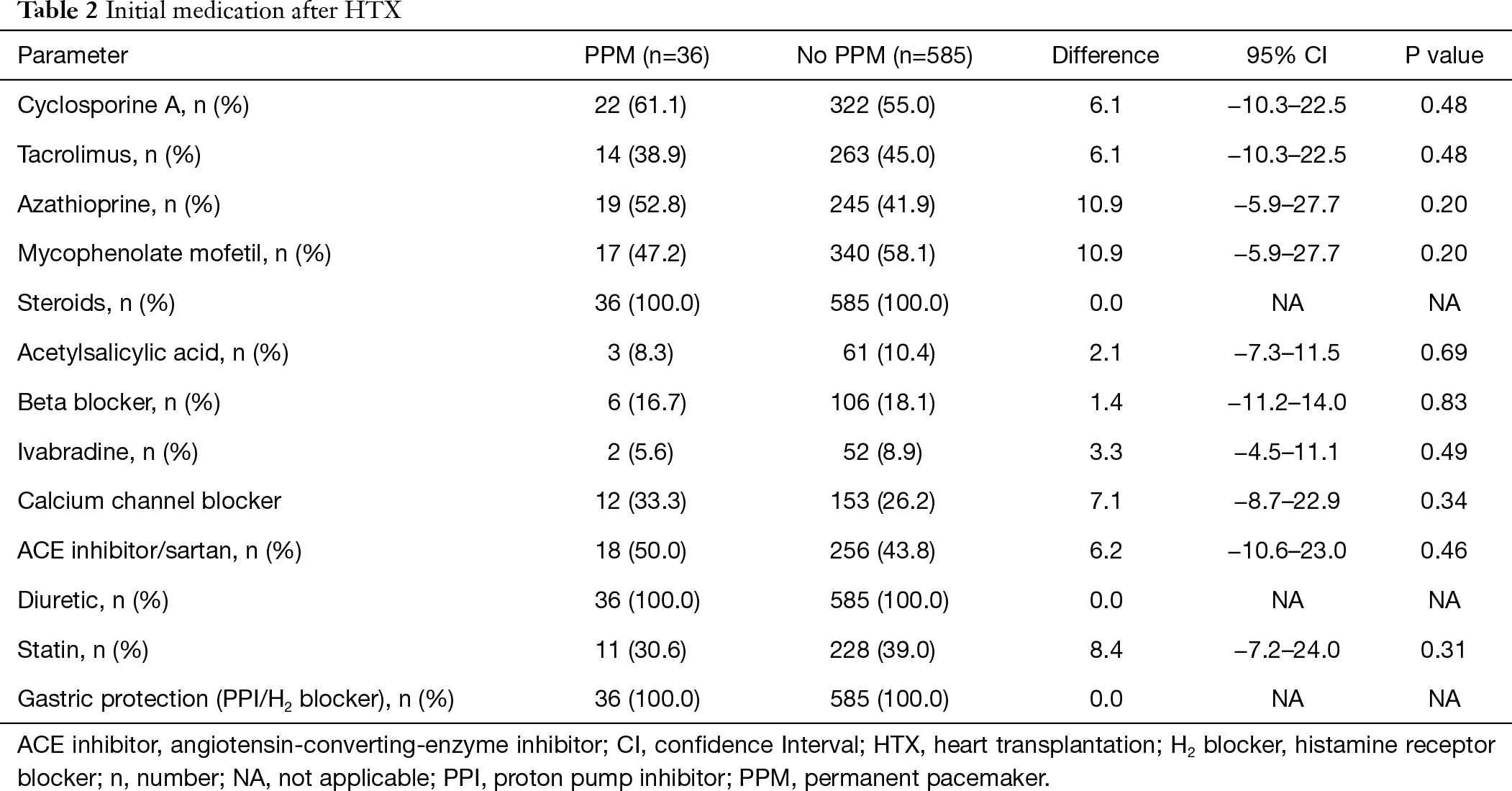 Multivariate analysis of risk factors for PPM implantation after HTX

Indications, perioperative data and complications of PPM implantation after HTX 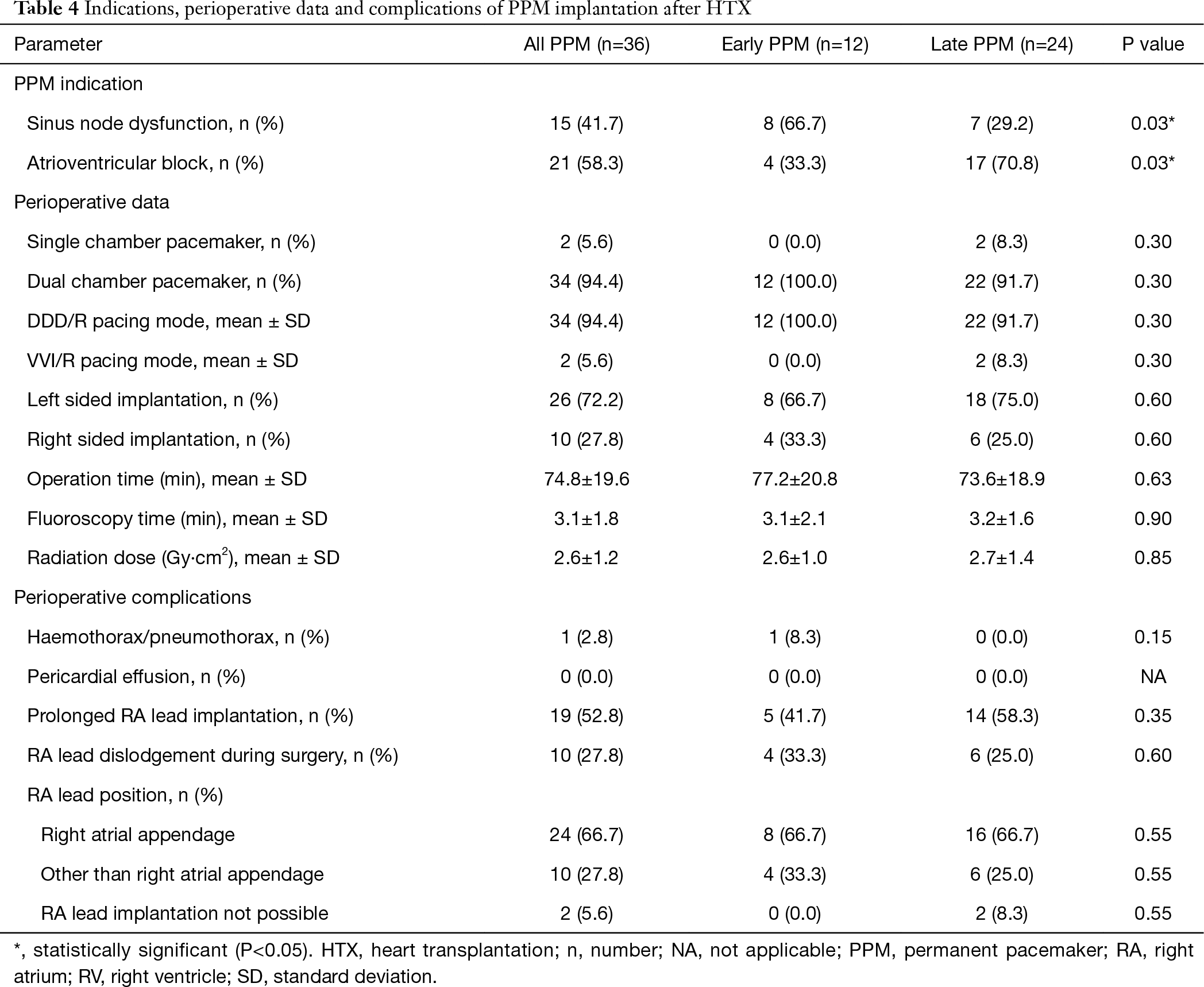 No statistically significant differences could be observed between groups in regard to stimulation threshold, sensitivity, or impedance during follow-up. Follow-up measures of PPM implantation after HTX are provided in Table 5. 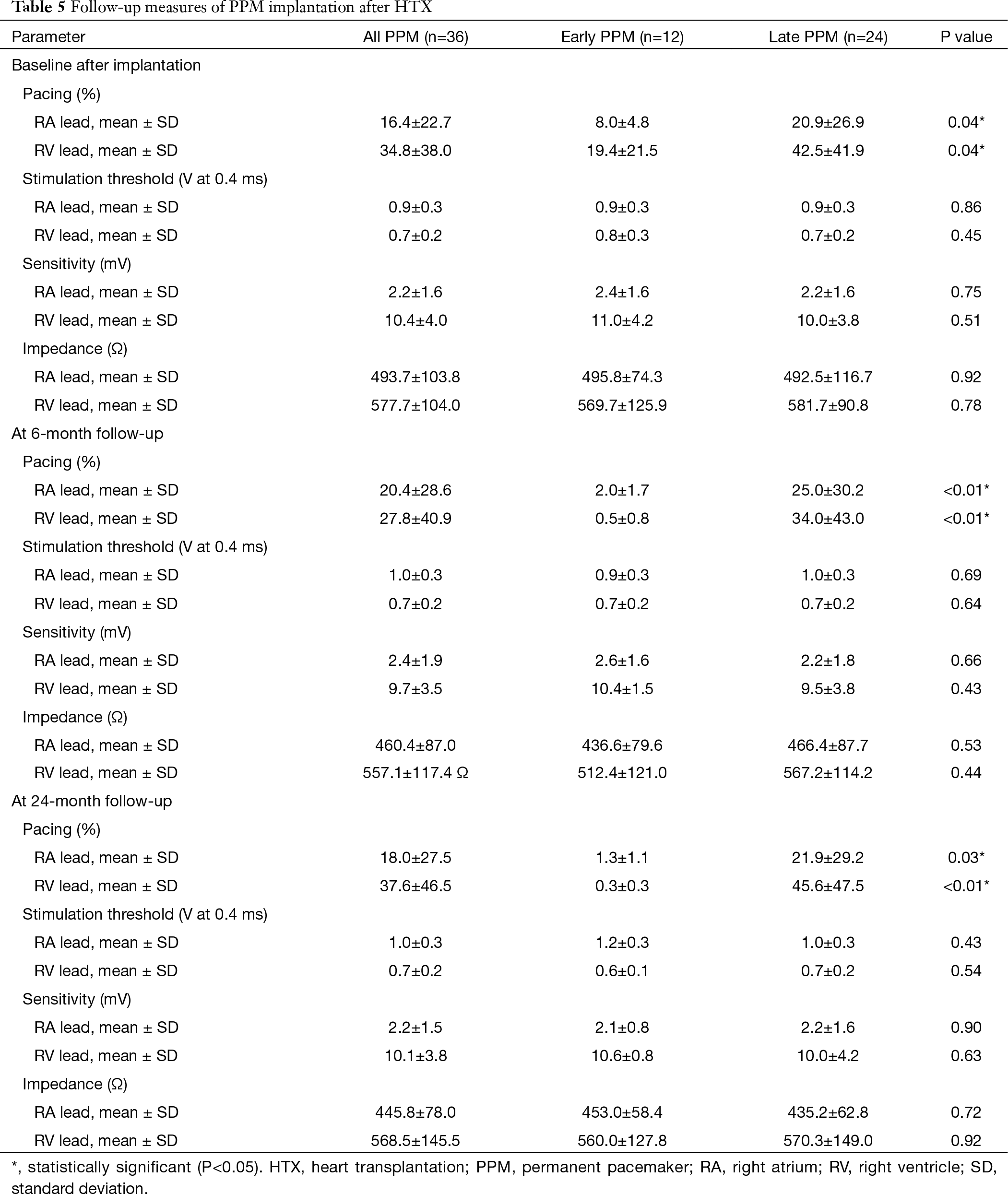 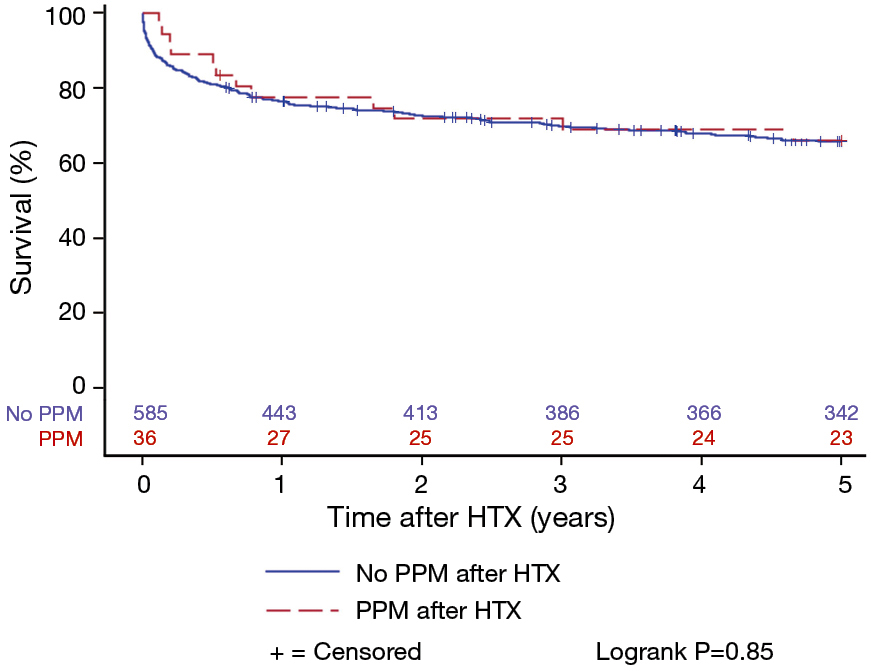 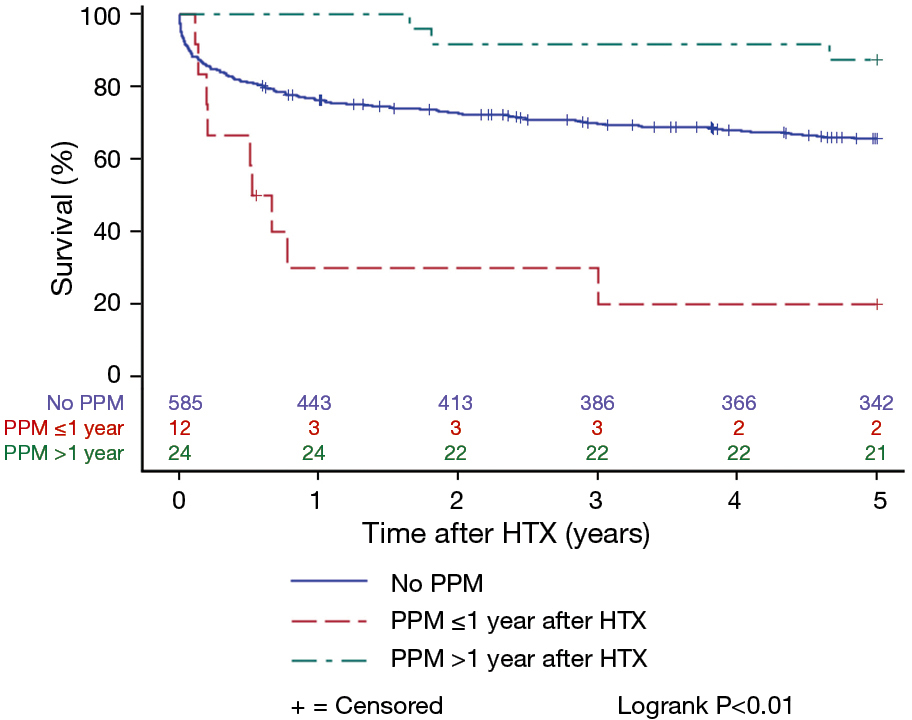 Causes of death after HTX

A total of 12 patients with PPM implantation after HTX (33.3%) deceased within five years after HTX. In the early PPM after HTX group, 9 patients (75.0%) passed away, while 3 patients (12.5%) deceased in the late PPM group after HTX. With regard to the causes of death, significantly more patients in the early PPM after HTX group died from infection/sepsis following chest infection than patients in the late PPM after HTX group (58.3% versus 8.3%; P<0.01), while there was no significant difference in left ventricular ejection fraction. Moreover, there was no difference between groups in terms of transplant failure, acute rejection, malignancy, or thromboembolic event/bleeding. Causes of death after HTX are given in Table 6.

Indications for and timing of PPM implantation after HTX

In the event of bradyarrhythmias after HTX, reversible causes such as negative chronotropic drugs, electrolyte imbalance, or hypothyreosis should be addressed first, followed by heart rate stimulating agents and temporary pacing considering PPM implantation as last option (6,12,28,36). If inevitable, the optimal timing of PPM implantation is essential in managing the balancing act between the early need for pacing and the risk of potential complications (6,12). The extended use of epicardial temporary pacing may be an adequate solution to bridge patients over transient bradyarrhythmias during the initial period after HTX (6,12,36). This could—in combination with other measurements such as the use of bicaval HTX instead of biatrial HTX—effectively reduce the incidence of PPM implantation due to SND in the early period after HTX. Additionally, regarding long term follow-up, the focus of PPM implantation after HTX could consequently change from SND early after HTX towards AVB in a later post-transplant setting. However, temporary pacing comes at a price such as an increased risk for infection, lead dislodgement, inadequate pacing, and may not always be possible in patients with rejection or voluminous fibrosis (6).

To our knowledge, this is the first study to show an elevated recipient BMI as an independent risk factor for PPM implantation after HTX. The occurrence of bradyarrhythmias has been linked to obesity and sleep apnea (52,53). Cessation of breathing and hypoxemia are postulated to be essential factors in the emergence of bradyarrhythmias (53). Additionally, due to cardiac denervation in patients after HTX, the autonomous control of the heart is affected making these patients more vulnerable to changes in chronotropic function (45).

During the study period from 1989 to 2018, we found no relevant imbalance in PPM implantations after HTX reducing the likelihood of a potential era effect.

Prolonged ischemic time has previously been reported to be associated with bradyarrhythmias after HTX as hypoxia during surgery can cause damage to the sinus node and the electrical conduction system of the cardiac allograft (1,4,28). However, we and other recent studies could not detect a significant association between ischemic time and PPM implantation after HTX (5,7,11-13).

Post-transplant survival and causes of death

Our findings were derived from a single-center registry study (Heidelberg HTX Registry) with 621 adult patients receiving HTX at Heidelberg Heart Center. Based on the study design, results should be treated with caution as it carries certain limitations. However, our study provides an excellent granularity which most multi-center studies lack. Further, patients received a standardized center-specific pre-, peri-, and post-transplant course of treatment and follow-up reducing the likelihood of potential selection bias and confounders (2,44-51).

This study analyzed data from patients receiving HTX at the Heidelberg Heart Center between 1989 and 2018. Due to this long study period, a possible era effect as a result of changes in medical care cannot be ruled out. In order to test the robustness of the study results, a sensitivity analysis including patients with TAC and MMF was carried out as the immunosuppressive drug therapy was subsequently switched from CsA and MMF to TAC and MMF from 2006 onward. Here, similar results were observed. A further change of medical treatment within the study period was the use of ivabradine instead of beta blockers or calcium channel blockers for heart rate reduction in patients after HTX from 2006 onward. However, there were no significant differences between patients with and without PPM implantation after HTX regarding the use of ivabradine, beta blockers or calcium channel blockers (45).

Multivariate analysis indicated a higher recipient BMI, an increased donor age, and the use of biatrial HTX as significant risk factors for PPM implantation after HTX. Kaplan-Meier estimator showed a significant inferior 5-year post-transplant survival of patients with early PPM after HTX in comparison to patients with late PPM or no PPM after HTX along with a higher percentage of death due to infection.

We acknowledge financial support by Deutsche Forschungsgemeinschaft within the funding program Open Access Publishing, by the Baden-Württemberg Ministry of Science, Research and the Arts and by the University of Heidelberg. Rasmus Rivinius is funded by research grants from the Faculty of Medicine, University of Heidelberg (Physician-Scientist-Program Scholarship) and the German Cardiac Society (Research Scholarship). Ann-Kathrin Rahm is supported by the German Society of Internal Medicine (Clinician-Scientist-Program Scholarship). We thank Anna Daut, Viola Deneke and Berthold Klein for their assistance and advice.

Ethical Statement: The authors are accountable for all aspects of the work in ensuring that questions related to the accuracy or integrity of any part of the work are appropriately investigated and resolved. This work complies with the Declaration of Helsinki. The study was approved by the ethics committee of the University of Heidelberg (S-286/2015). Written informed consent was obtained from patients for inclusion in the Heidelberg HTX Registry allowing the clinical and scientific use of data.