Cardiac resynchronization therapy (CRT) is an adjuvant treatment for refractory heart failure (HF) that may reverse left ventricular remodeling, improve symptoms, and reduce mortality (1-3). However, approximately one third of patients fail to show a benefit (4,5). Chronically elevated filling pressure from left HF can induce secondary pulmonary hypertension (PH), leading to increased morbidity and mortality. Identification of PH derived from echocardiography is an adverse prognostic marker in HF and for patients undergoing CRT. Serial assessment of PH after CRT can also be helpful, and improvement of PH after CRT has been identified as an independent positive prognostic marker (6-13). Soluble ST2 (sST2) is an emerging cardiac biomarker, expressed by strained cardiomyocytes, and linked to cardiac fibrosis in HF. Elevated concentrations of sST2 are associated with progressive myocardial remodeling and adverse HF prognosis (14-17). Serial measurements of sST2 provide incremental value to baseline levels, reflecting changes in myocardial remodeling overtime (16). Along with other biomarkers, sST2 concentrations before CRT implantation may help to predict clinical non-response and MACE after CRT (18,19). Besides being associated with left ventricular remodeling, concentrations of sST2 have been linked to pulmonary vascular diseases, including PH. Accordingly in this study, we aim to examine a biomarker panel of myocardial fibrosis (sST2, galectin-3), myocardial wall stretch [amino terminal pro-brain natriuretic peptide (NT-proBNP)], and myocardial necrosis [high-sensitivity troponin-I (hsTnI)] and examine its relationship with PH defined by right ventricular systolic pressure (RVSP) by Echo and changes in the biomarker values to changes in PH status. In a focus analysis with sST2, we hypothesized that baseline and serial sST2 measurements would correlate with PH in patients undergoing CRT and parallel PH changes after CRT. We also hypothesized that sST2 serial variation after CRT will be associated with clinical outcomes.

A total of 111 patients were included in this analysis. Study participants were followed through a time horizon up to 2 years. Thirty two patients did not have RVSP at 6 months (12 participants completed the 6-month office visit, but did not have an echocardiogram, 15 participants had 6-month echocardiography, but RVSP was not measurable, 4 participants had MACE with 3 deaths and 1 hospitalization, 1 participant did not have 6-month follow up, but had follow up later and was noted to be MACE-free and have a positive CRT response), therefore, follow-up echocardiographic data was available in 79 patients. Of the 111 patients included in the study, 88 patients had baseline serum blood samples drawn and 78 patients had plasma samples. For the first 10 patients, we did not have plasma samples as we initially started collecting only serum samples. Some patients had a clinical follow-up but declined the serial blood draws. We had approximately 50% retention rate for follow-up serial samples over 6 months, with resulting 42 patients with serial serum samples and 35 patients with plasma. The institutional review board approved the study protocol and all patients provided written consent prior to study initiation.

Clinical endpoints included 6-month CRT response and 2-year MACE. CRT response was measured using the Heart Failure Clinical Composite Score (HF CCS). The HF CCS includes subjective metrics like NYHA functional class and global assessment score as well as objective measures of decompensation such as hospitalization and mortality (27). HF CCS scores that were stable or worsened were considered non-responders, while responders improved their HF CCS scores. Major adverse cardiovascular event (MACE) was defined as the composite endpoint of death, cardiac transplant, left ventricular assist device, and HF hospitalization. CRT response and MACE was adjudicated by a committee consisting of 2 cardiologists, blinded to the biomarker and echocardiography results. Disagreement was resolved by consensus with a third cardiologist.

Peripheral venous blood samples were obtained at the time of device implantation and during the 6-month follow up visit. Samples were stored at −80 °C and sent to independent laboratories for analysis. The laboratories were blinded to the clinical history and timing of the samples. Plasma sST2 concentrations (Presage ST2; Critical Diagnostics, San Diego, CA, USA) were measured using enzyme-linked immunosorbent assay with an interassay coefficients of variation (CV) <12% and intraassay CV of 2.3%. Plasma gal-3 measurements (BGM Galectin-3, BG Medicine, Inc.) were performed by enzyme linked immunosorbent assay (ELISA), with interassay CV of 2.2%, and intra-assay CV of 3.0%. Serum NT-proBNP measurements (Dimension Vista Flex, Siemens) were performed by a one-step sandwich chemiluminescent immunoassay, with interassay CV of <3% and intra-assay CV of <4%. Serum hs-TnI measurements (Dimension Vista; Siemens) were performed by the one-step sandwich chemiluminescent immunoassay had a total imprecision (CV) of 8.5% at 4.4 pg/mL and 4.6% at 11.8 pg/mL. 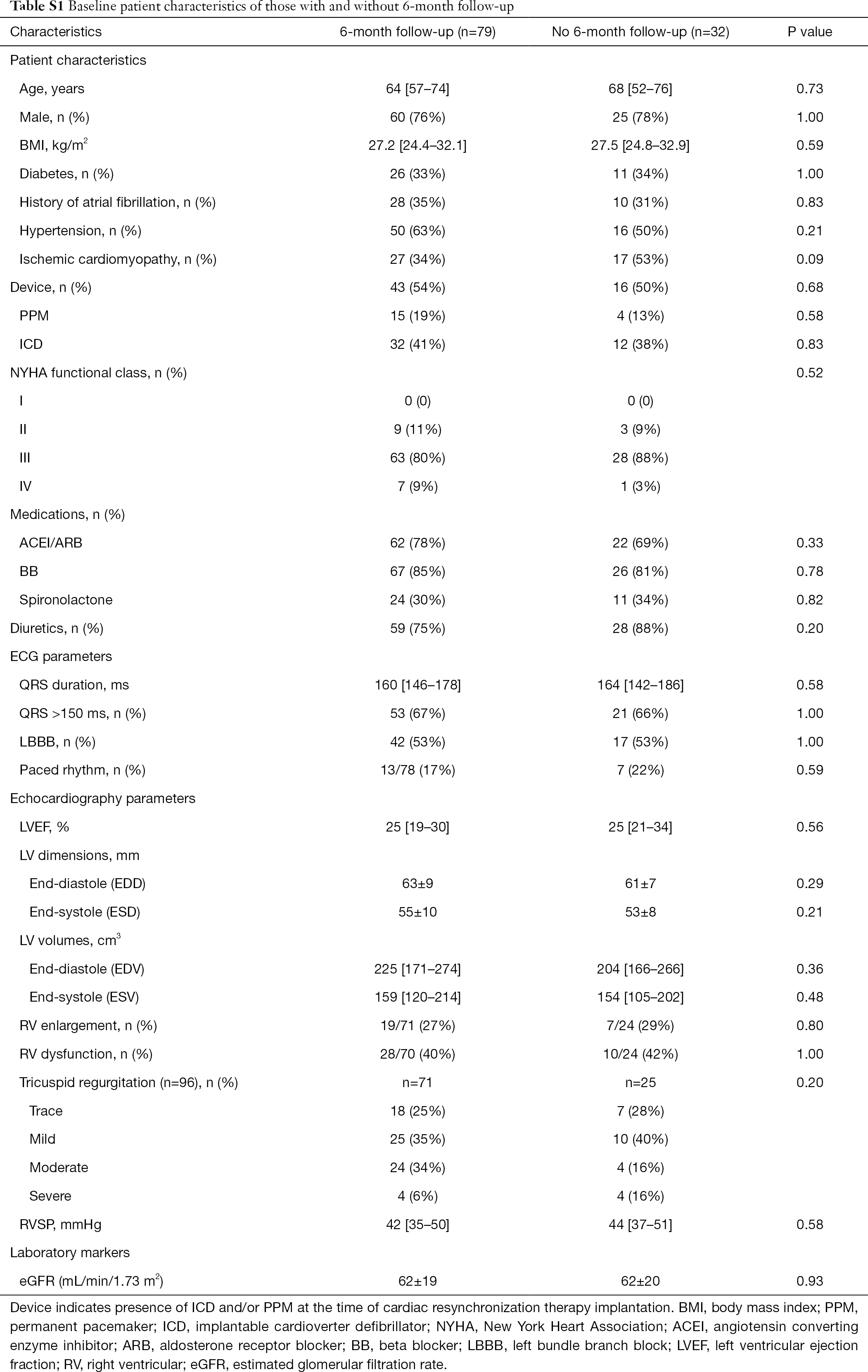 Echo-based PH with RVSP >35 mmHg was present in 89 patients at baseline (80%), with a median RVSP in the study population of 42 mmHg (IQR, 29–60 mmHg). Severe PH with >60 mmHg was present in 13 (15%) patients. Of the baseline Echo parameters, RVSP was the strongest predictor of clinical events, and independently associated in multivariable models (Table 2). Compared to those with normal RVSP, severe PH was associated with greater than 5-fold increase risk of CRT non-response and two-year MACE (Table 3, Figure 1). Mild-moderate PH (RVSP 35–60 mmHg) had a slightly increased risk of CRT non-response and 2-year MACE compared to normal RVSP, but was not statistically significant. 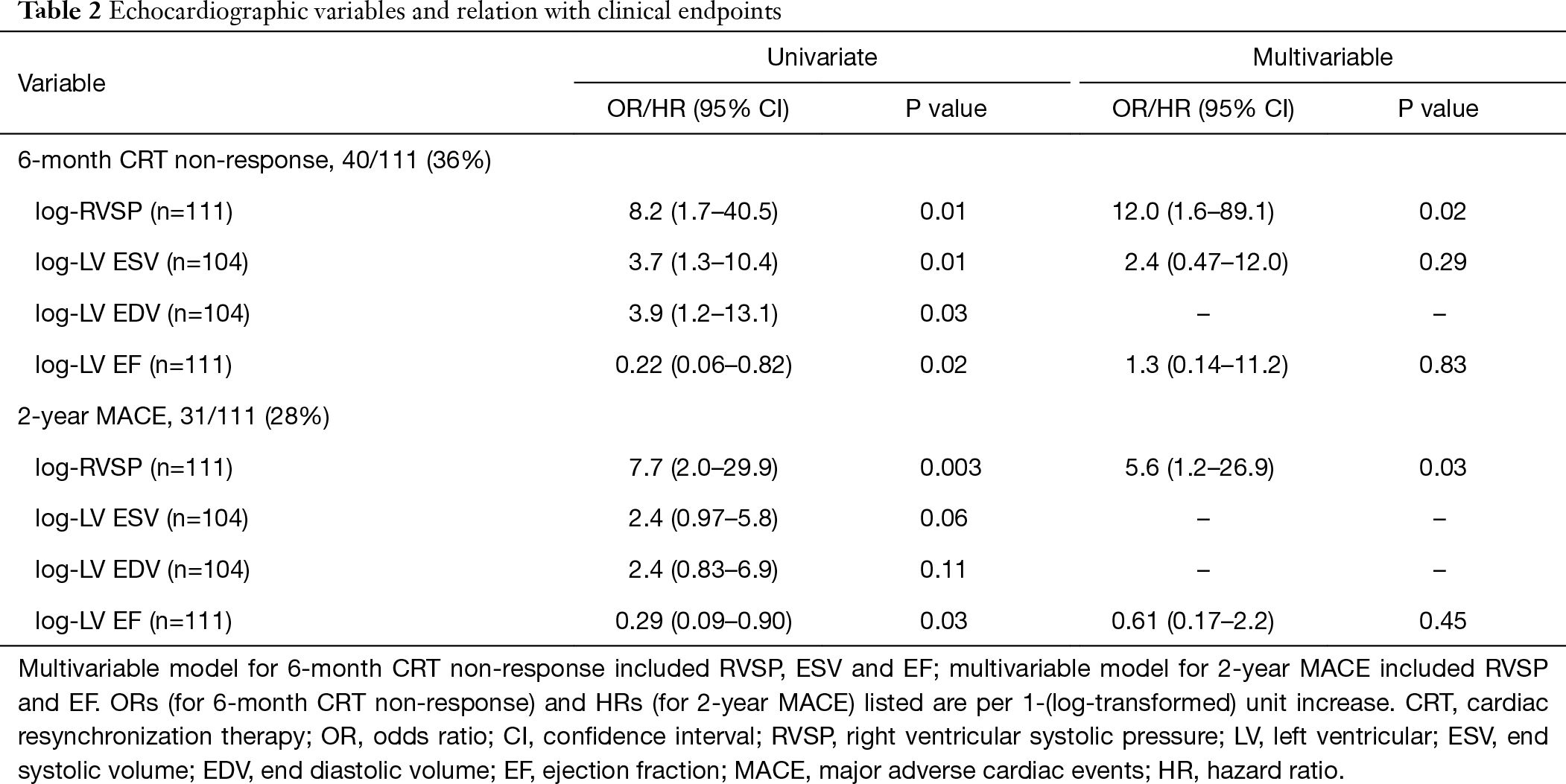 Table 4 depicts the association of clinical outcomes with changes in PH severity. RVSP progressors (those whose PH severity class worsened) and those with persistent PH had over 2-fold increase odds for being a CRT non-responder at 6 months and over 11-fold increase risk of MACE at 2-year (Table 4, Figure 2).

Tables 5-7 show the biomarker panel of myocardial fibrosis (sST2, galectin-3), myocardial wall stretch (NT-proBNP), and myocardial necrosis (hsTnI) and their relationship with PH status by RVSP. Of these biomarkers, only NT-proBNP and sST2 were discernable between groups. Both markers were also associated with right ventricular size/function and TR severity (Tables S2-S4).

The baseline median NT-proBNP levels had a graded increase based on PH severity by RVSP (P=0.003) and had lower values in regressors vs. non-regressors (P=0.01), there was no significant pattern of NT-proBNP changes at 6 months in those with no PH, regressor, persistent PH, and progressor (P=0.08).

In this study, we found that Echo-based RVSP was associated with 6-month CRT nonresponse and 2-year MACE. Severe PH patients were more likely to be CRT non-responder and have 2-year MACE than non-PH patients. Amongst the panel of 4 HF biomarkers of myocardial fibrosis, myocardial wall stretch, and myocardial necrosis, we observed a graded increase in baseline median NT-proBNP and sST2 concentrations with worsening PH severity. Progressors and those with persistent PH were more likely to be CRT non-responder at 6 months and have MACE at 2-years when compared to patients with no PH or regressors. Additionally, we found that PH regressors had a reduction in sST2 concentrations while those with no PH, persistent PH, and progressors had a slight increase in sST2 by 6 months. We did not observe this difference for NT-proBNP.

The present study provides further evidence that increased PH is related to morbidity and mortality in patients undergoing CRT (6,13). PH was a common finding in our population, occurring in 80% of our cohort, and was a strong independent predictor of 6-month CRT non-response and two-year MACE. PH in this population is caused by elevated left atrial pressure, which is the result of the variable combination of systolic dysfunction, diastolic dysfunction and/or associated valvular disease. Our finding that that PH (reflecting the global impact of these individual parameters) better predicted clinical outcomes than LVEF or LV size is not surprising. Pre-implantation RVSP measurement serves as a valuable independent prognostic marker beyond the severity of left heart systolic dysfunction.

While the observed relationship between myocardial wall stretch marker of NT-proBNP and RVSP PH severity is known and expected, we also found that sST2 and its serial changes better paralleled PH severity and progression/regression. While both markers can be influenced by volume status, our data suggest that sST2 may be more specific to PH. Interestingly; recent data suggest that extra-myocardial production of sST2 may account for some circulating concentrations of the marker (28). In the BIOCRT study, we found no trans-myocardial gradient when measuring sST2 concentrations in the coronary sinus (20), and other work demonstrated increased sST2 in pulmonary arterial endothelial cells (29), suggesting a potential implication for the pulmonary vasculature in sST2 release. Furthermore in patients with severe pulmonary inflammation, such as those with acute respiratory distress syndrome—a state of severe pulmonary vascular injury and inflammation—some of the highest reported concentrations of sST2 have been reported (30). Taken together, these findings suggest a pulmonary source for sST2 and could explain in part the relationship between serial sST2 and RVSP that we have found.

The study population reflects a small cohort of patients undergoing CRT at a single tertiary care center that may represent selection and treatment bias limiting generalizability. Our study population was predominantly male, had mild-moderate renal insufficiency, and had significant left ventricular systolic dysfunction characterized by primarily NYHA functional class III disease. We do not have inferior vena cava measurements, thus our data on RVSP does not include estimated right atrial pressure from inferior vena cava collapsibility. The small sample size limits the power to examine subgroups and produced large confidence intervals, which limited the number of adjustments in the multivariable model. Follow-up echocardiography and biomarker levels were not available in a proportion of patients at follow-up. Direct invasive measurements would have been interesting; however, this echo-based measure still correlated well with clinical outcomes.

Funding: The study was supported by NIH/NHLBI K23HL098370. Dr. Truong also received support from the NIH L30HL093896. Dr Beaudoin is funded by Fonds de Recherche Québec-Santé and Heart and Stroke Foundation of Canada. The reagents/assays were provided and performed by Critical Diagnostics, BG Medicine, and Siemens Healthcare Diagnostics Inc.

Ethical Statement: The authors are accountable for all aspects of the work in ensuring that questions related to the accuracy or integrity of any part of the work are appropriately investigated and resolved. The institutional review board approved the study protocol and all patients provided written consent prior to study initiation.