As a pro-inflammatory factor, serum amyloid A protein (SAA) activates the coagulation system (10). Deguchi’s study (11) showed that the increase in the plasma SAA level was closely related to VTE. However, there have been reports on the relationship between SAA gene polymorphisms and VTE. Interleukin-1 (IL-1) and tumor necrosis factor-a (TNF-a) are common nonspecific inflammatory markers. Many studies suggest that IL-1 and TNF-a levels and gene polymorphisms may be a risk factor for VTE (12-19). One report, in particular, the Canakinumab Anti-inflammatory Thrombosis Outcome Study (CANTOS) trial (20), confirmed that an IL-1-specific antibody could reduce the risk of VTE. However, these studies were conducted in White populations, and there are no reports of studies using Chinese populations. In our previous study, we investigated the relationship between interleukin-6 (IL-6), C-reaction protein (CRP), and methylenetetrahydrofolate reductase (MTHFR) gene polymorphisms with VTE, with the results suggesting that IL-6 gene polymorphisms may be a risk factor for VTE (21-23). On the basis of previous studies, we selected the nonspecific inflammatory markers SAA, IL-1, and TNF-a and their 8 gene polymorphisms to study the relationship between these markers and VTE.

Fasting venous blood samples were taken in the morning and centrifuged at a 3000 revolutions per minute for 10 minutes after being placed in a sodium citrate anticoagulant vacutainer tubes. The separated plasma was placed in an Eppendorf tube and stored in a freezer at −80 °C for later analysis. After thawing at conventional temperature, the levels of SAA, IL-1, and TNF-a were detected by standard ELISA method.

Genotyping of the inflammatory variants 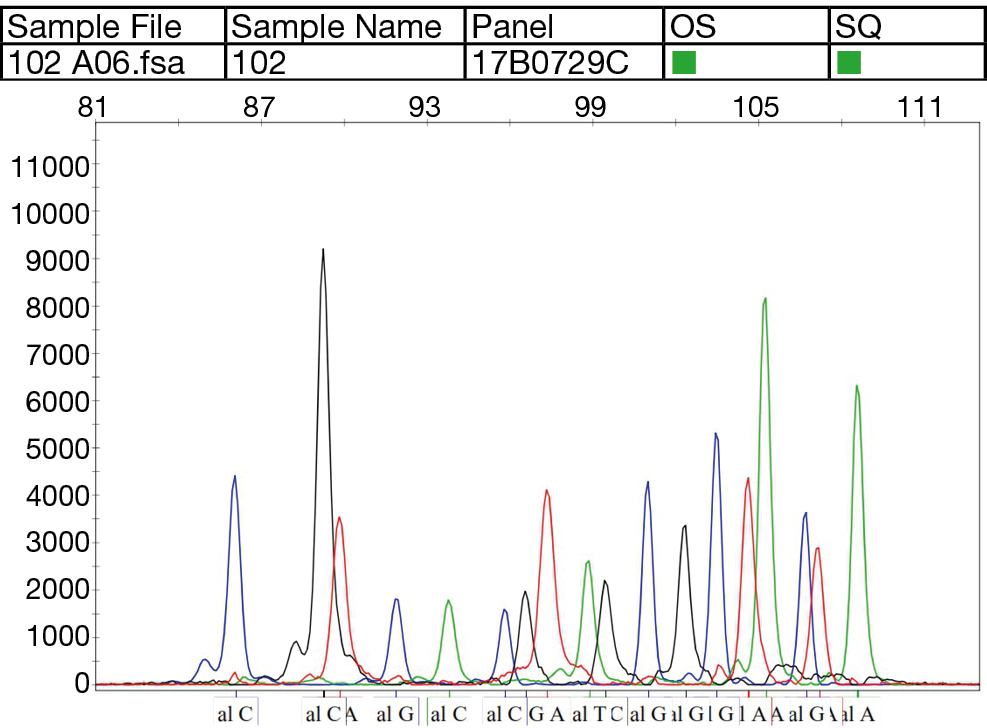 The statistical software package SPSS 23.0 (International Business Machines Corporation, 2015) was used for statistical analysis. The measurement data satisfying a normal distribution are expressed as the mean ± standard deviation, and a t-test was used for comparisons between groups. If a normal distribution was not satisfied, measurement data are expressed as the median (P25% and P75%) and a two-sample nonparametric test (Mann-Whitney U test) was used. A chi-square test was used to compare the categorical variables between groups. The genotype and genotype frequencies of the case and control groups were compared with the predicted value of Hardy-Weinberg equilibrium by a chi-square test. The odds ratio (OR) was calculated by cross tabulation and logistic regression as an indicator of relative risk. A two-tailed P value of <0.05 was considered indicative of statistical significance. 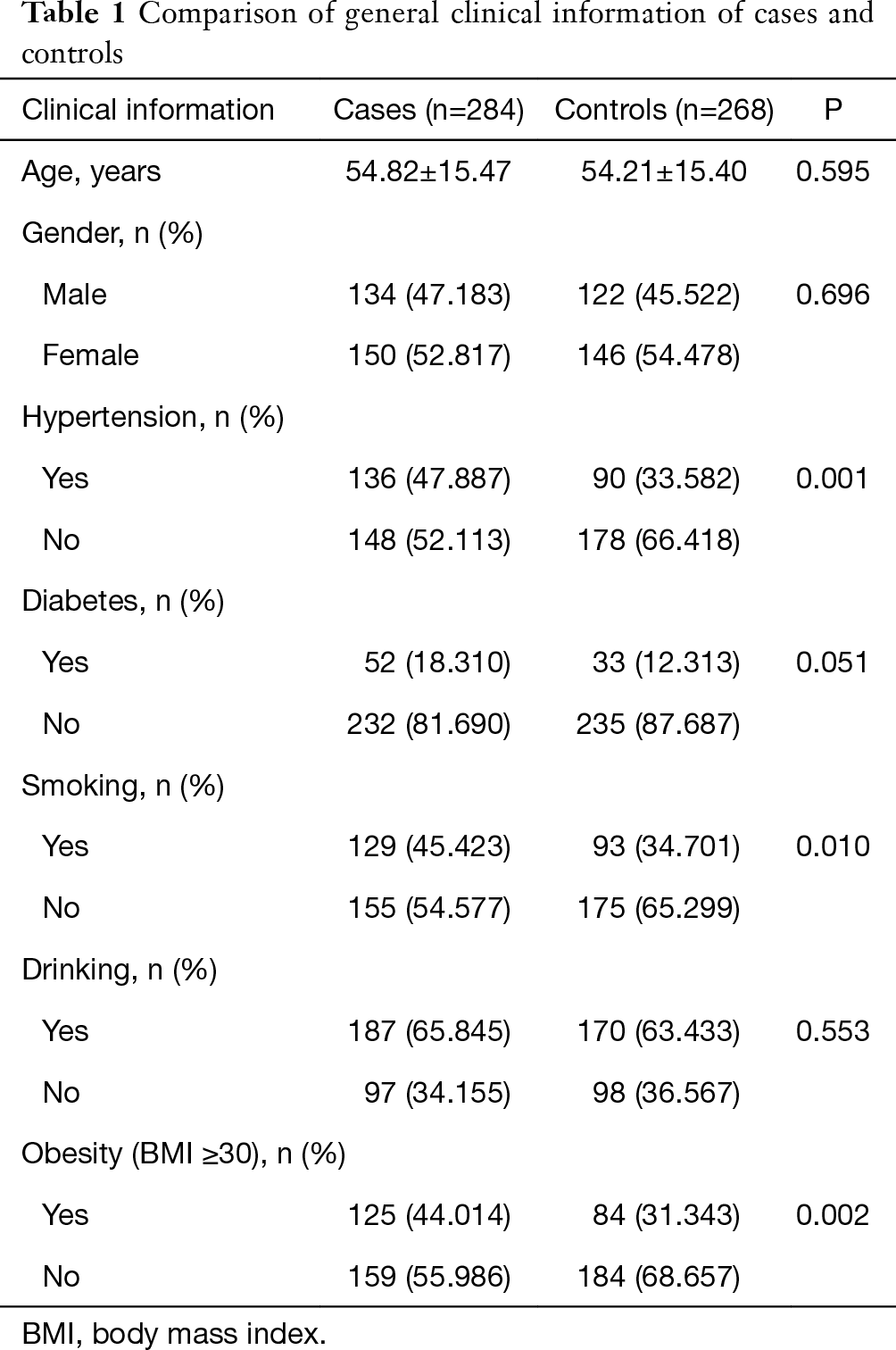 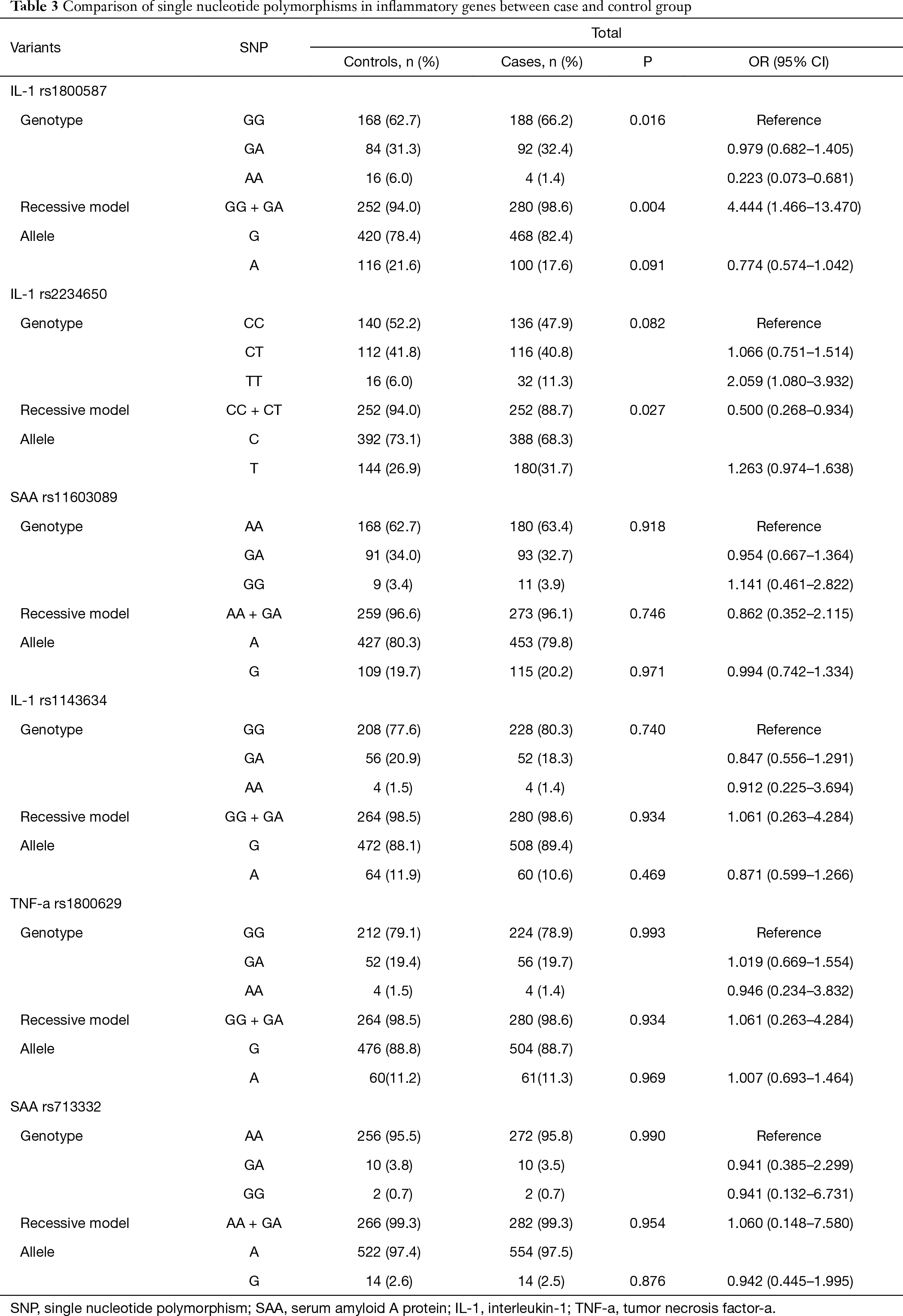 Comparison of the SAA, IL-1, and TNF-a levels for each single-nucleotide polymorphism (SNP) revealed no significant difference in these protein levels among the SNPs (Table 4). 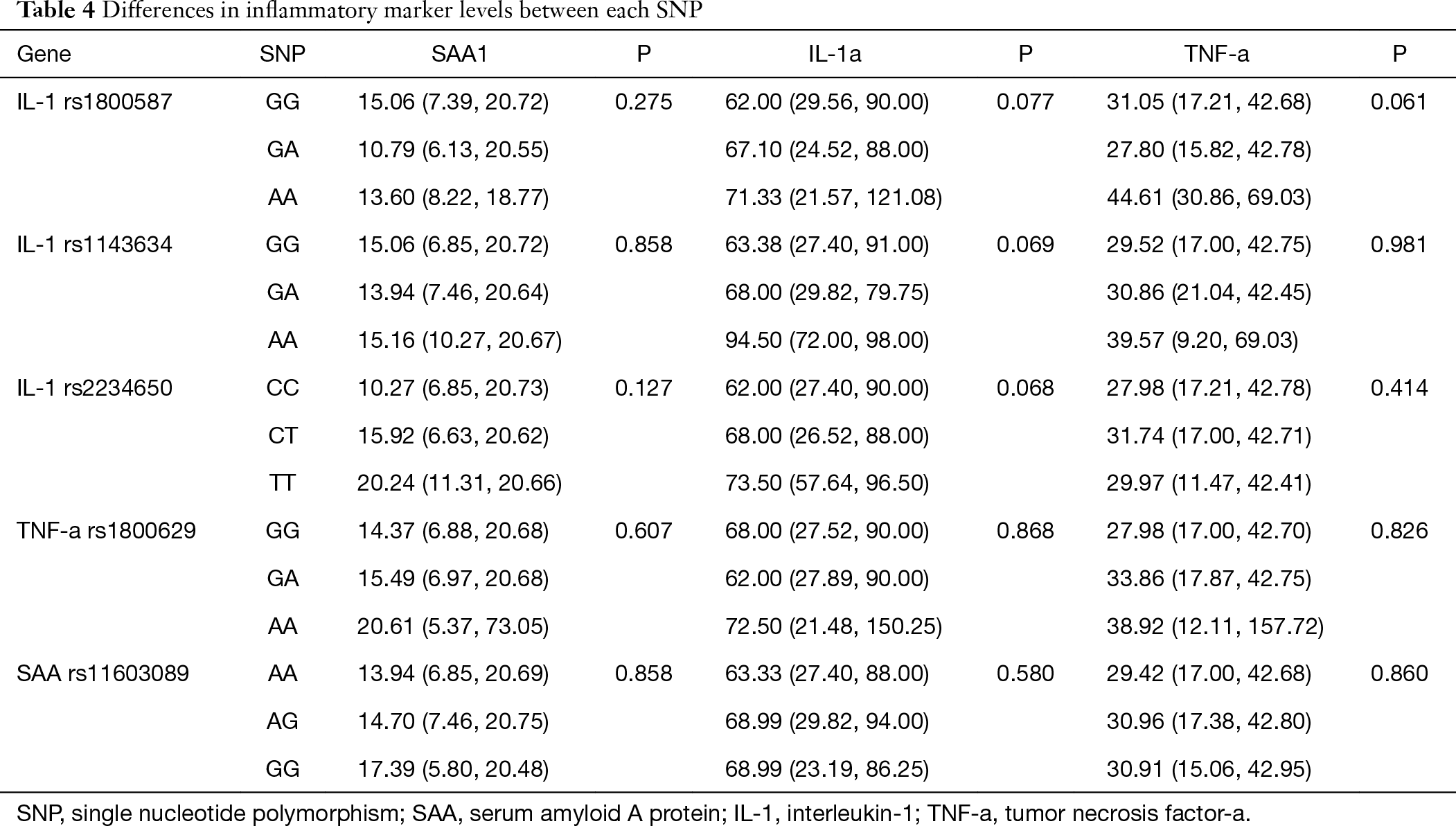 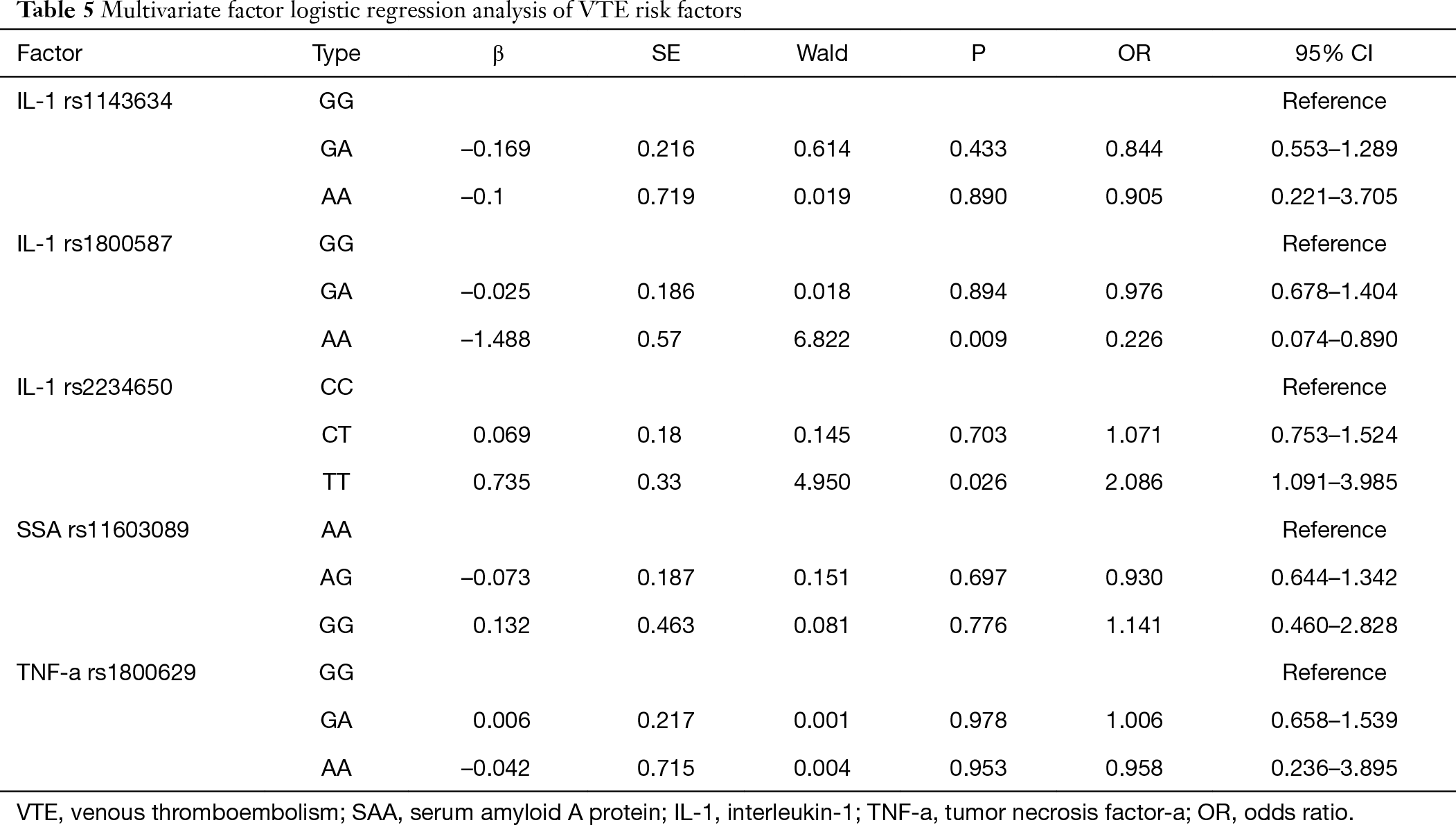 The relationship between inflammation and VTE has been explored for more than ten years, but no consistent results have been found. SAA is a biomarker that promotes inflammation and coagulation activity. After the activation of inflammation, SAA promotes the secretion of inflammatory cytokines while stimulating the release of TF, and leads to the thrombosis (10). Our study suggests that the level of SAA in the VTE group was significantly higher than that in the control group (P=0.032), which is consistent with the findings of a study exploring plasma SAA levels in patients with VTE in the United States (11).

The genetic risk of VTE is approximately 60%, but most of the specific genetic elements have not yet been revealed (32). Significant differences in the incidence of VTE and gene polymorphisms were found among different regions and races, and the relationship between inflammatory markers and their gene polymorphisms with VTE in the Chinese population is still unclear. Furthermore, there are no reports concerning VTE and SAA gene polymorphisms. Beckers (12) and Zee (13) confirmed the close relationship between IL-1 rs180058 and rs1143634 gene polymorphisms and VTE in Dutch and White females from the United States, respectively. Roselli (16) and Horakova (19) studied Caucasian and Czech populations, respectively, and suggested that TNF-a-308 G gene polymorphism may be associated with the occurrence of VTE. However, the above studies were carried out in a White population from Europe and the United States and did not detect the levels of inflammatory markers. To address this issue, we studied the relationship between 3 inflammatory markers and their 8 gene polymorphisms in VTE patients in a Chinese population. The results suggested that the IL-1 rs11800587 GG and GA (OR: 4.444; 95% CI: 1.466–13.470) genotypes are common in patients with VTE, while the IL-1 rs2234650 CC and CT (OR: 0.500; 95% CI: 0.268–0.934) genotypes were common in the control group. Multivariate logistic regression analysis showed that the TT genotype at IL-1 rs2234650 variant (OR: 2.086; 95% CI: 1.091–3.985) was an independent risk factor for VTE. The AA genotype of the IL-1 rs1800587 variant (OR: 0.226; 95% CI: 0.074–0.890) was identified as an independent protective factor for VTE. The association between VTE and 8 inflammatory gene polymorphisms was revealed in a Chinese population.

Depending on the study population, disease spectrum, and specimen sources, studies on whether the level of inflammatory factors is regulated by their gene polymorphisms have reached different conclusions (33). There was no significant difference in the SAA, IL-1, or TNF-a levels among each SNP in our study, consistent with the research conducted by Brown (33). However, this conclusion is affected by a variety of confounding factors, and gene polymorphism may affect the levels of markers and disease development in a variety of ways; therefore, a large number of clinical studies are needed to truly reveal the correlation between the levels of inflammatory markers and their gene polymorphisms in different populations.

Funding: This work was supported financially by the National Natural Science Fund of China (81560803).

Ethical Statement: The authors are accountable for all aspects of the work in ensuring that questions related to the accuracy or integrity of any part of the work are appropriately investigated and resolved. The Ethics Committee of the First Affiliated Hospital of Xinjiang Medical University reviewed and approved the ethics of this study (No. 20150716-06). Each patient was provided with a description of the study and signed a written informed consent form.