Video-assisted thoracoscopic (VATS) lobectomy in the animal model is very helpful in surgeons training, particularly in a new approach as the uniportal. It allows to know the different visualization with the camera through the same incision and learning the keypoints of the instrumentation (1,2).

The best animal model in our experience is the sheep, due to its anatomy.

Our technological center is located near to the hospital and is managed by a veterinarian, with great experience in training courses, not only for thoracic surgery, but also general surgery, vascular surgery, microsurgery.

The training hall has eight surgery tables with a ventilator and monitorization. The vet is helped by another two vets and two assistants. They are responsible for the general anesthesia, selective intubation of the sheep, and the posterior control during the surgery. The center has also simulators to practise sutures in artificial tissues or animal tissues (Figure 1).

The anatomy of the sheep is in our opinion the most similar to the human model. We use adult sheep, six months old and with an average weight of 25-28 kg.

We recommend starting with the left upper lobe, because it is a small lobe, and so the exposure is easier. The lingula is long, needing frequently to be positioned in the posterior part of the hemithorax.

After the upper lobectomy, the left lower lobectomy is easier because the artery and the bronchus are exposed in the fissure. For this reason, we suggest the students to try to do the lobectomy from the inferior aspect of the lung, after dividing the pulmonary ligament.

In the right side, the anatomy is a little different from human. The cava vein is bigger, and the pulmonary arterial branches are behind it. The upper lobe has a tracheal bronchus. The upper and lower veins are hidden behind the cava vein too.

The sheep is positioned in the lateral decubitus with a rol or a small pillow under the thorax (Figure 2).

Figure 2 Lung’s anatomy in the sheep.

The best place is in the fourth intercostal space, in the lateral part of the hemithorax and in front of the tip of the scapula. Three or four centimeters are enough.

We use a 30º-10 mm camera and most of the time we place it in the posterior angle of the incision.

For the dissection we recommend Scanlan instruments, with proximal and distal articulation: thin lung grasper, dissector, scissor. The long curved suction is helpful to expose and sometimes to dissect the hilar structures.

The staplers are the same as in human surgery, and frequently they are too big to divide the vessels. In this case the vascular clips are the solution.

Energy devices are helpful to divide the mediastinal pleural, the hilar tissue around the bronchus and the pulmonary ligament. 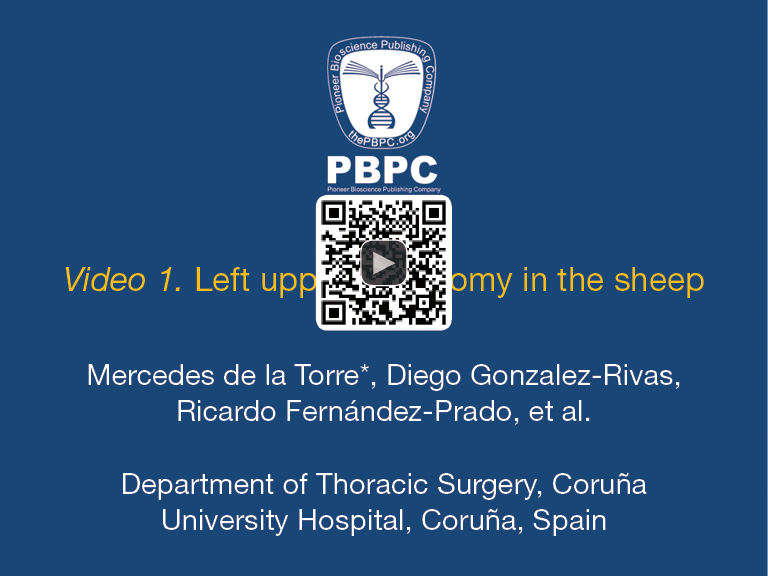 The camera is introduced through the incision and placed in the posterior angle.

The upper lobe is retracted to posterior with a lung grasper by the assistant, and then the hilar structures are visible.

It is important to be careful with this dissection because these vessels are thin and fragile.

The next step is to open the mediastinal pleura up to the posterior aspect of the arterial trunk. Now we can dissect and divide the artery or the lobar bronchus. We recommend to use a silk for the reference of the bronchus, to make the introduction of the stapler easier. This avoids the lesion of the lingular artery, located behind the bronchus.

The final step is the fissure (Fissure-less technique), that is divided with one or two staplers. The lobe is removed and you can use a protective bag. 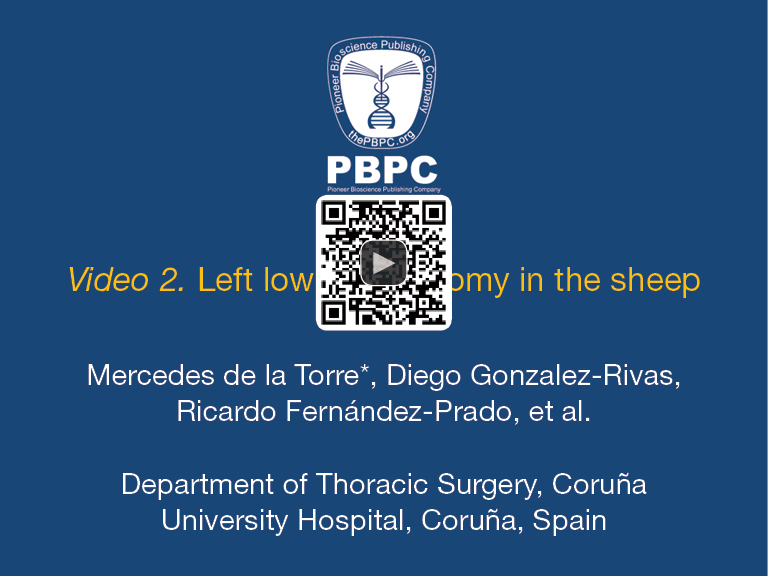 The surgeon is positioned in the inferior part of the thorax, because the camera must be directed to the pulmonary ligament.

The lung is exposed to the upper part of the hemithorax with one or two lung graspers, since it is a big lobe.

The pulmonary ligament is very long. It is divided with the electronic devide or the cautery up to the lower vein.

This vein is then easily dissected and divided with a vascular stapler.

Many adhesions to the esophagus are divided up to the bronchus.

The basilar arterial trunk is dissected and divided with big vascular clips or a vascular stapler.

The final step is the dissection of the bronchus, that it is divided with a stapler. 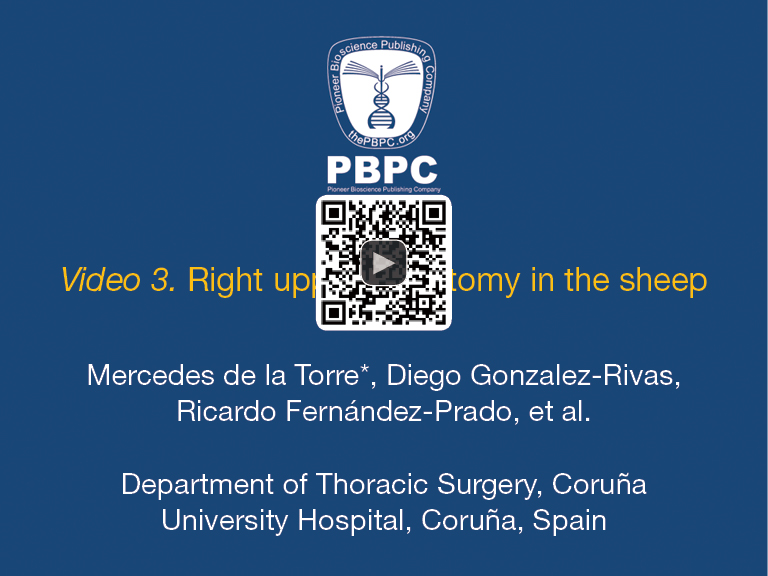 The anatomy of the right lung is different from humans and the pulmonary resections are more difficult. One problem is the big cava vein.

After opening the utility incision, the camera is placed in the posterior angle.

The upper lobe is retracted to the back.

Two or three veins are dissected separately and divided with vascular clips, because they are small.

Then you can find two arteries. They are dissected and divided with vascular clips.

The trachea is exposed and we recommend dividing first the fissure with two staplers.

The posterior mediastinal pleura and tissues are divided and the tracheal bronchus is exposed. It is dissected and transected with a stapler.

It is the most difficult. The cava vein is big and the lower pulmonary vein is hidden behind it.

The lobe is retracted to the upper part of the pleural cavity with one or two lung graspers.

The long pulmonary ligament is divided with the energy device or the cautery. It is helpful to separate the cava vein with a small sponge stick.

The lower vein is then dissected and transected with a stapler.

The arteries are located in the anterior aspect of the lobe and they can be divided with vascular clips.

The tissue in the posterior face of the lobe is dissected and divided to expose the bronchus.

The bronchus is divided with a stapler. The lobe is removed.

Although VATS lobectomy has been demonstrated to be safe and effective, the technique is not widely. This may, in part, reflect difficulty in acquiring appropriate skills (6).

This minimally invasive technique places special demands on the surgeons. Using simulation-based training on artificial models or animals has been proposed to overcome the initial part of the learning curve (7,8).

Surgical simulation may be able to facilitate a more rapid and safe introduction into surgical practice without exposing the patient to unnecessary risk. There are number of relevant issues regarding simulation in thoracic surgery: computer-based, animal or tissue block (9,10). The virtual reality platform would be a good starting point for novice thoracic surgeons (11,12). The porcine model can then be used once surgeons gain some operative experience and will facilitate the development of fine dissection skills of hilar vessels (13).

Simulation may be able to replace some of the case numbers required to achieved proficiency in a complex operation, but this requires that the simulation environment have high fidelity and be challenging, constantly testing the learner’s growing cognitive an technical skills (14).

Our experience with five courses in The Technological Center allows us to affirm that the sheep is an excellent model in VATS lobectomy training.

The uniportal VATS approach is the most ergonomic approach and it provides you a direct view to the hilar structures and the fissure (15). But you must be confident with the lung exposure and the instrumentation. The bimanual instrumentation is very helpful and to define every step is the key.

The practice in the animal model is a good option to acquire these skills.