The uniportal access was initially described by Rocco et al., firstly for the management of minor procedures (1). Since 2010, when the uniportal approach was introduced for major pulmonary resections, the technique has been spreading worldwide.

This technique provides a direct view of the target tissue. The parallel instrumentation achieved during the single-port approach mimics the maneuvers performed during open surgery (1-3).

It represents a less invasive approach than the multiport technique, and minimizes the compression of the intercostal nerve.

The aim of this chapter is to establish the most important steps of the uniportal lobectomy and to reveal some useful tricks to perform the technique.

The utility incision is usually placed in the 5th intercostal space. The proper placement of the incision is crucial for good access to upper hilar structures and lymph node stations. No trocar and no rib spreader are required.

One of the key points is the adequate exposure of the lung, which is mandatory for every step. Also, the rotation of the surgical table and the correct retraction of the parenchyma are essential to improve the exposure and to obtain different angles of view. Another key point is the bimanual instrumentation.

This approach provides a direct visualization of the target tissue (5). In addition, the surgeon and the assistant are placed in front of the patient, so they have the same field of vision and the coordination is better.

For most of the surgical steps, the thoracoscope is usually placed at the posterior part of the utility incision, working with the instruments in the anterior part (Figure 1). 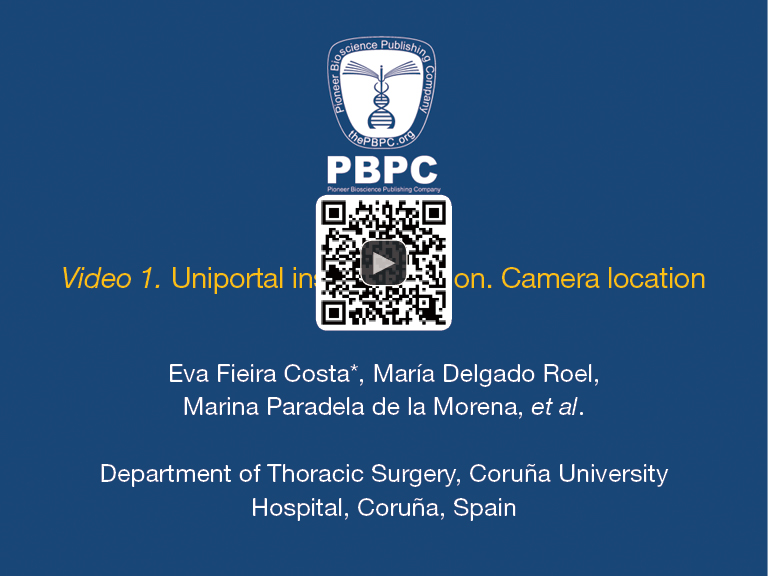 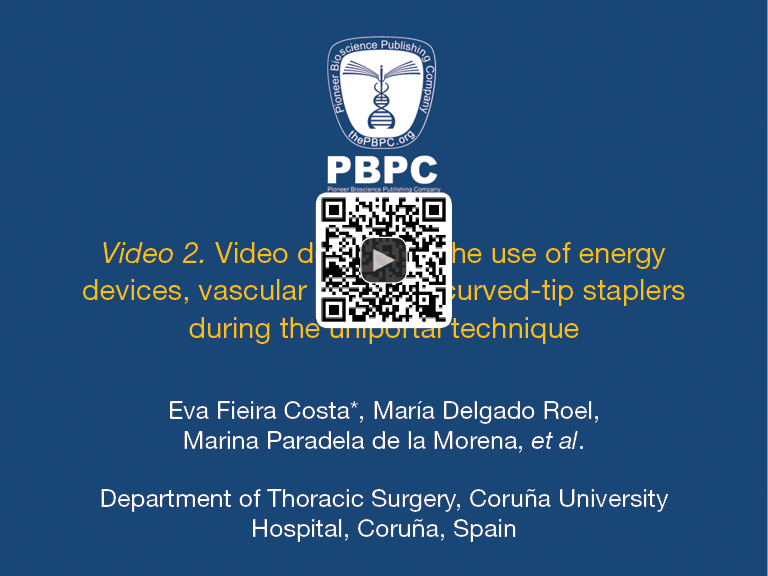 Figure 2 Video describing the use of energy devices, vascular clips and curved-tip staplers during the uniportal technique (7). Available online: http://www.asvide.com/articles/328

The technique is different depending on whether the fissure is complete or not:

In the video, there is an example of the fissureless technique performing a left lower lobectomy, from down to up (Figure 3). After retracting the lower lobe posteriorly and superiorly, the vein can be dissected using the right angle clamp, so the stapler goes easily into place. 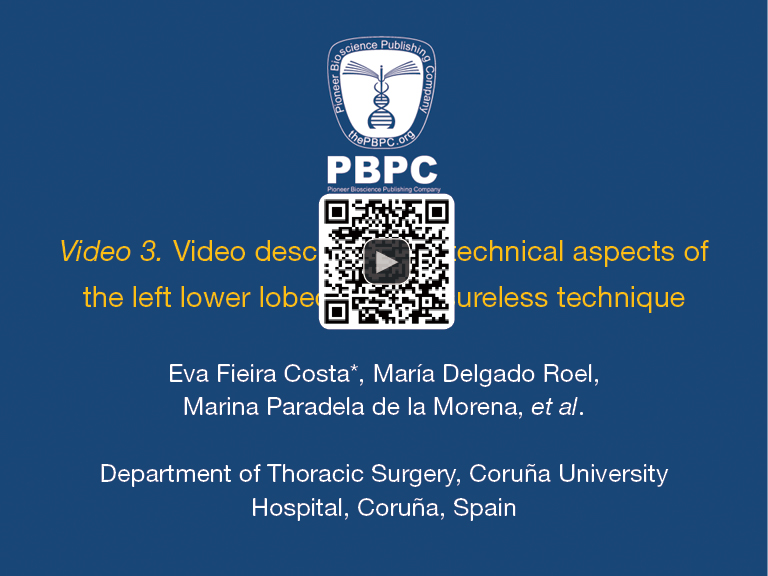 The most difficult step during this lobectomy is the dissection of the bronchus; care must be taken in order to avoid injuries in the basilar artery. An optimal plane must be created between the bronchus and the artery, to staple without tractions. Once the bronchus is transected, the artery can be divided. The last step is to complete the fissure.

On the right side, the right lower lobectomy is very similar. As in this video (Figure 4), firstly the pulmonary ligament is cut and the vein is dissected and stapled. In this case, the fissure is complete, so the artery can be easily exposed and divided. Sometimes, it is easier to divide the artery into basilar and superior segmental branches. Then the bronchus can be stapled; the last step is the fissure. 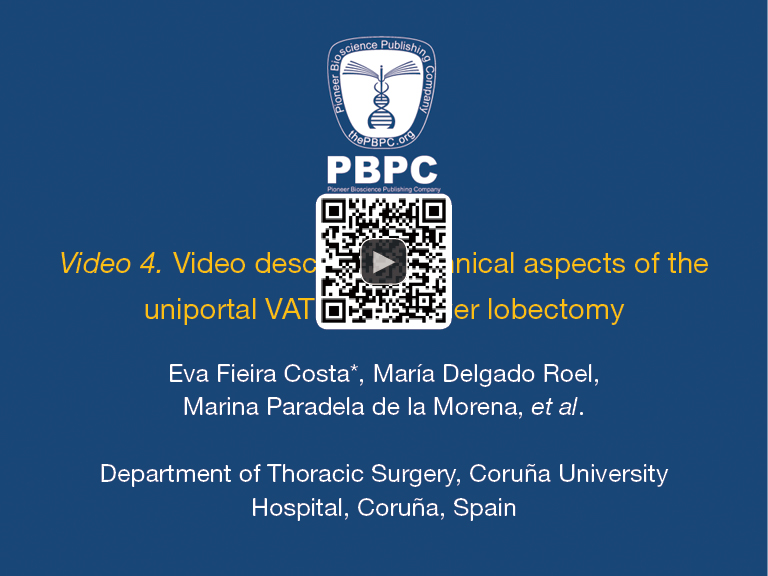 The sequence is different if a fissureless technique is performed: starting the procedure by cutting the pulmonary ligament and dissecting the vein. When the vein is divided, the bronchus is exposed and transected. Care must be taken to avoid injuring the bronchus or the artery of the middle lobe. After the section of the lower bronchus, the artery is identified and stapled. The fissure is the last step (Figure 5).

Probably, this is the most difficult lobectomy using the uniportal approach, especially when the fissure is not complete (Figure 6). We recommend dividing the arterial trunks before dissecting the vein. Once the artery is divided, the vein can easily be exposed. It is very important to dissect the vein as distal as possible to improve the angle for the insertion of the stapler. 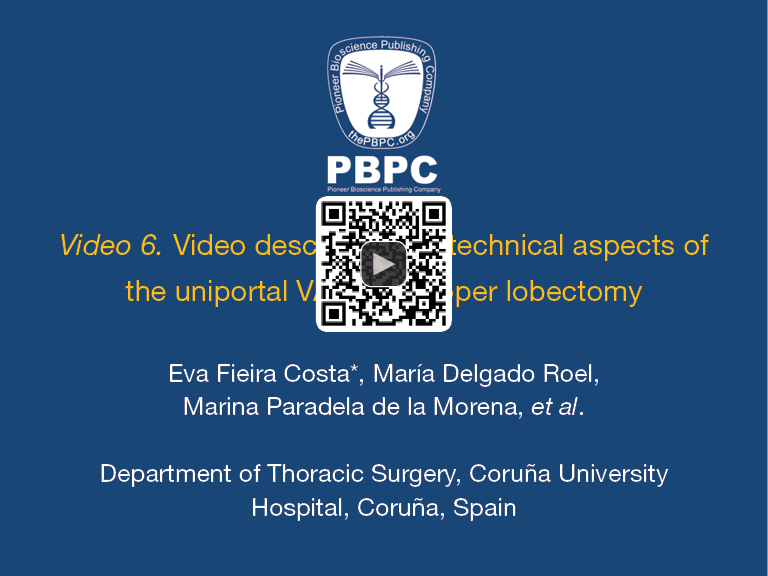 Focusing on the management of the left upper bronchus, there are four different approaches to the bronchus transection (Figure 7): 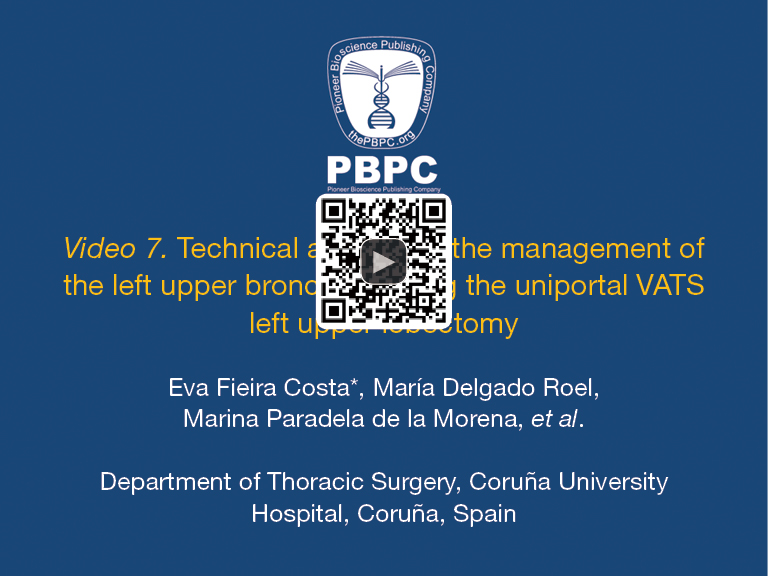 The steps for this lobectomy are very similar to those on the left side (Figure 8). 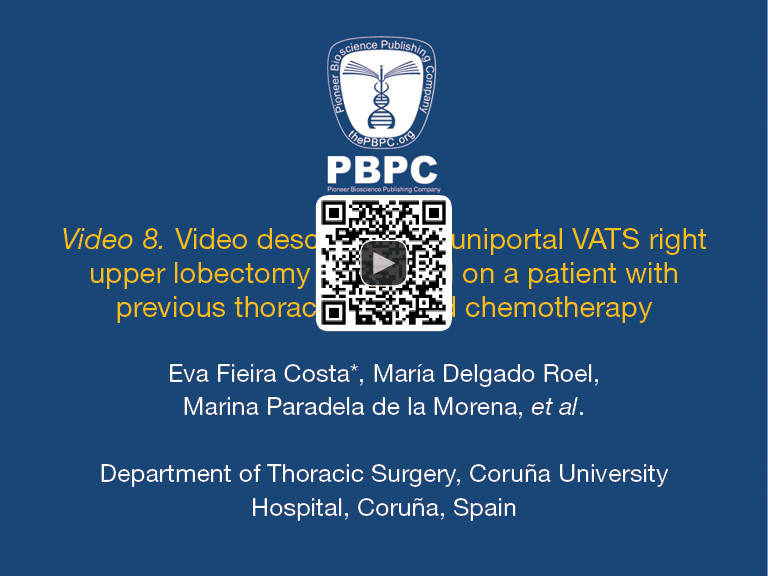 When the artery and the vein are transected, the bronchus is divided and stapled and finally, the fissure. This last step is performed by placing the anvil of the stapler over the surface of the interlobar artery.

During the approach to the minor fissure, the camera is placed in the anterior portion of the utility incision and the instruments at the posterior. Perhaps, this is the only step in which the camera position is changed, but it provides a direct view of the hilum.

This lobectomy is usually performed from bottom to top. The sequence is as follows: anterior portion of the major fissure, vein, bronchus, artery and finally, the remaining fissure. Only when the fissure is complete or the artery can be easily exposed, the artery can be divided before the bronchus (Figure 9). 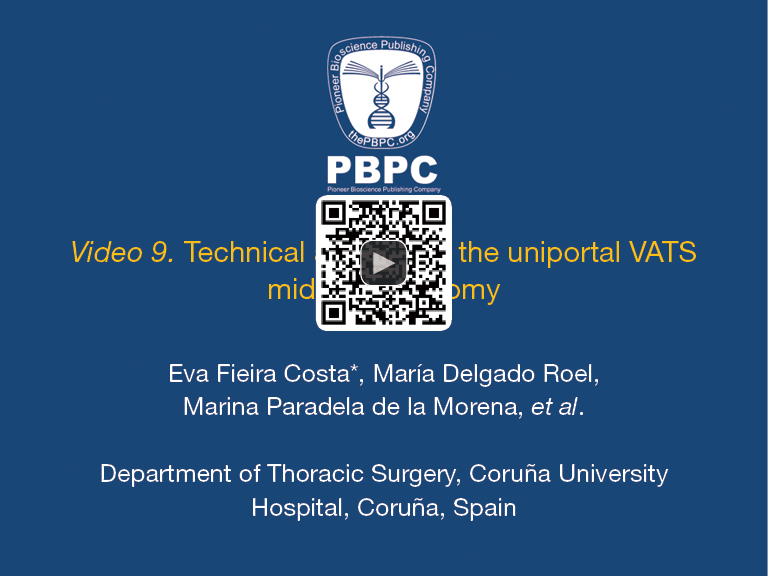 Due to the smaller branches, vascular clips are often used to divide the arterial branches in the middle lobectomy.

The uniportal lobectomy is a feasible, safe and an oncologic procedure in expert hands (4). To date, we have performed about 400 uniportal major pulmonary resections with good postoperative outcomes. Only one incision is used, which is less invasive than the multiportal technique. No trocar is used, so there could mean less compression to the intercostal nerve. The instrumentation is more anatomic and the visualization of the target is direct (5).