Recently, it has been reported that by comparison with general anesthesia, spontaneous breathing anesthesia (SBA) for video-assisted thoracoscopic surgery (VATS) can reduces the adverse effects in hemodynamics, ventilator associated lung injury (VALI) and lymphocyte responses (1,2). In this study, we describe and evaluate the feasibility of SAB for cervical TRR.

This is a prospective study consist of patients who had cervical TRR under SBA from May 2015 to March 2019. All patients meet the indications for SBA, including: ASA grade of I–III, and a body mass index (BMI) <26 kg/m2. Patients with a blood disorders, disorders related to constrained cardiac output (such as mitral stenosis, aortic stenosis, severe arrhythmias, hypertrophic cardiomyopathy), or contraindicated for superficial cervical plexus block (CPB) were ineligible for this procedure.

Confirm the location and extent of the lesion

Approximately 15 minutes before the airway was opened, changed the ventilation mode from SIMV to manual assisted ventilation (FiO2 1, air flow 2–5 L/min). The patients were induced to resume spontaneous breathing. After the trachea was incised, a sterile catheter was inserted in the distal portion of the trachea across the surgical field, oxygen was continuously supplied to distal airway (air flow 2–5 L/min) (Figure 2A). If the SpO2 decreased to 90%, connected the catheter to the jet ventilation circuit for jet ventilation (driving pressure =0.5–1.0 bar, FiO2 =1.0, respiration rate =60 breaths/min, I:E ratio of 1:1) (Figure 2B). If there was no obvious improvement of SpO2, the distal trachea was intubated with a sterile endotracheal tube, and connected to a

Data were analysed using SPSS 19.0 software (SPSS Inc., Chicago, IL, USA). Normal distribution data is expressed as mean ± standard deviation and categorical data as number (proportion). Comparisons of the differences between values at a specific time PaO2 and PaCO2 were using one-way ANOVA. Statistical significance was presented as a P value of <0.05 throughout the study. 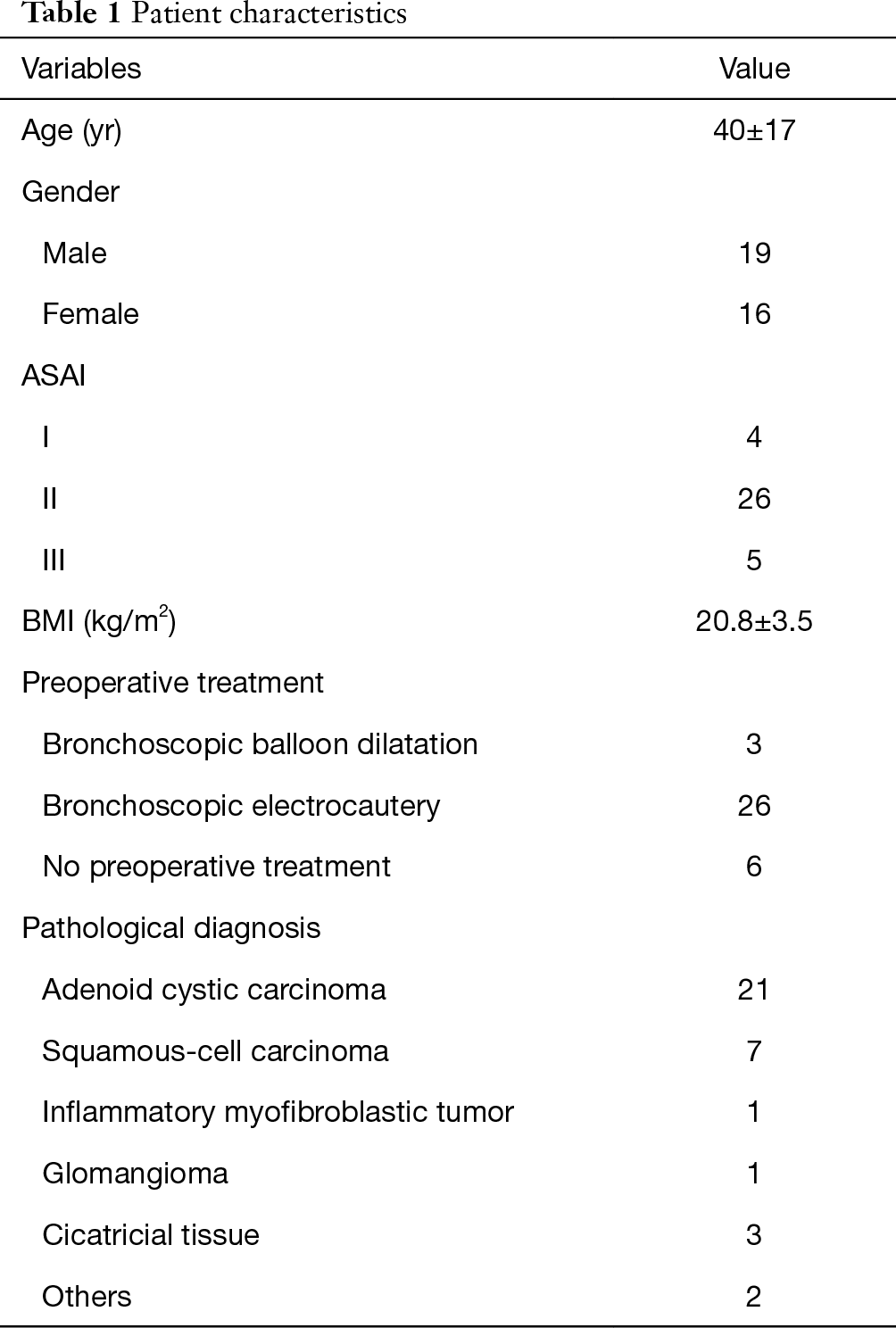 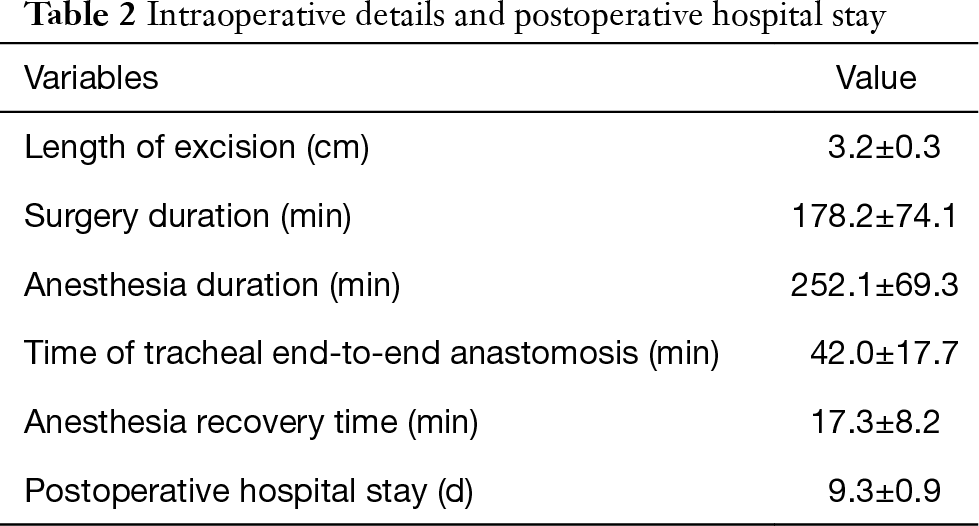 All patients resumed to spontaneous breathing before the airway was opened. After the airway was opened, a sterile catheter was inserted in the distal portion of the trachea to supply oxygen (Figure 2A). Twenty-nine cases (83%) maintained SpO2 >90%. During the anastomosis phase of procedure, the sterile catheter was removed from the distal trachea after discussion between surgeons and anesthesiologist in 4 cases (11%), because of the obstruction of surgical field (Figure 2B). One case (3%) showed a SpO2 decrease to 85% after the airway was opened, connected the catheter to high-frequency ventilation circuit for high-frequency ventilation. The SpO2 was suddenly declined in one patient, diagnosed as right pleural rupture leading to the right pneumothorax, immediately intubated across the field. After expanded the lung and sutured the right ruptured pleura, pulled out the endotracheal tube, the patient resumed to spontaneous breathing, the operation was smooth (Table 3).

The patients showed an arterial oxygen concentration (PaO2) of 396.5±83.8 mmHg after anesthesia induction. During the open airway phase, PaO2 decreased to 173.4±53.6 mmHg, and then recovered to 279.1±82.7 mmHg after the airway closed. After anesthesia induction, the patients showed an arterial carbon dioxide concentration (PaCO2) of 49.3±6.0 mmHg. Before the airway was opened, the PaCO2 reached to 53.9±8.1 mmHg, then slightly decreased to 51.0±6.6 mmHg during the open airway phase. After the anastomosis was completed, the PaCO2 was 51.6±7.6 mmHg (Figure 3). 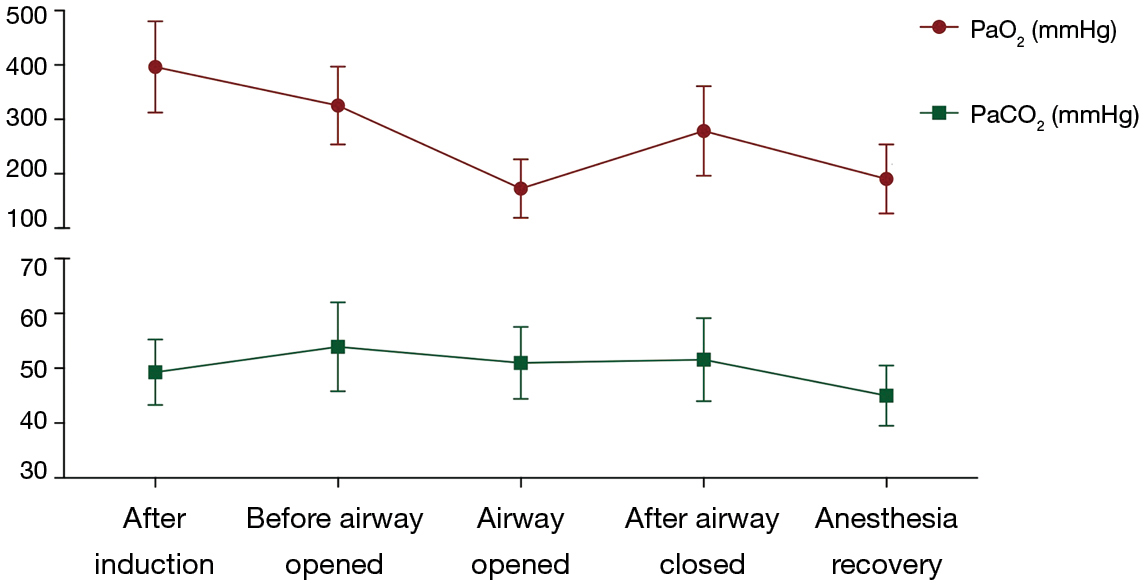 Stop anesthetic infusion after the operation. All patients resumed stable spontaneous breathing and removed the LMA after recovered consciousness.

For the patients with tracheal tumors, muscle relaxation after anesthesia induction may lead to tracheal collapse and an aggravation of the airway obstruction, resulting in life-threatening hypoxemia. Therefore, awaked fiberoptic intubation in emergency situation has also been reported (5). However, when the tracheal tumor is close to the glottis, the endotracheal intubation may lead to tumor shedding, bleeding, especially pedicled tumors and hemangioma. It has been reported that inserted LMA after anesthesia induction to avoid the possibility of injury to the tumor by endotracheal intubation (6). For patients with benign tracheal stenosis, it is often characterized by the mucosa chronic inflammation with necrosis and granulocytic infiltration, formation of scar tissue. Due to the poor expansibility of tracheal membrane, if endotracheal intubation fails, it may lead to swelling and bleeding of the lesion, reintubation become more difficult (7).

The safety and feasibility of SBA for VATS surgery have been reported both in our experience and recent studies (8-10). Based on our experience of SBA and surgery management, it allowed us to perform this anesthetic technique for cervical TRR.

Another concern is hypoxemia. In our experience, during cervical TRR, the patients are in a state of double lung spontaneous breathing, rather than one lung spontaneous breathing in lung surgery. Therefore, after the trachea is incised, most patients can maintain PaO2 higher than 100 mmHg when the patients resumed steady spontaneous breathing, and the PaO2 even better than in lung surgery (13). In our study, there was one patient with emphysema. This patient can resumed steady spontaneous breathing before the airway opened. After the trachea was incised, a sterile catheter was inserted in the distal portion of the trachea. The SpO2 maintained 96–100% when the airway was opened. However, because the trachea is opened, when the SpO2 decreased, it is unable to assisted ventilation temporarily like the lung surgery. Jet ventilation or even surgical cross-field intubation is needed when hypoxemia exist. In this study, after the trachea was incised, a sterile catheter was inserted in the distal trachea across the surgical field to increase fraction of inspired oxygen in all patients. 83% of patients maintained SpO2 higher than 90%; 4 patients maintained SpO2 higher than 90% after removed the catheter and inhaled air only; in one case, although spontaneous breathing was observed after trachea was opened, SpO2 gradually decreased to 85%, and jet ventilation was applied immediately. The SpO2 increased higher than 90% without anesthesia conversion. In one case, SpO2 suddenly decreased when dissecting trachea, diagnosed as right pleural rupture, immediate intubation across the surgical field. The patient resumed spontaneous breathing and the endotracheal tube was removed after treatment. It should be emphasized that the premise of maintaining stable oxygenation is to keep the airway clean and unobstructive. In addition, due to minute ventilation volume decreased when sedation we found out that there was mild hypercapnia in the cervical TRR. Hypercapnia has negative hemodynamic effects, for instance, arrhythmic and impaired cardiac contractility (14). None of the patients in our study showed any signs of hemodynamic instability. It was interesting that the PaCO2 slightly decreased after the airway is opened. We consider it’s because the incision was first made distal of the lesion could relieve of obstruction.

LMA is a supraglottic airway devices has some advantages in tracheal surgery. It is a safe and well-established airway device without using muscle relaxant, obviates the complications of endotracheal intubation. LMA is beneficial to the patients with subglottic stenosis. LMA provides two conduits, one for ventilation as well as flexible bronchoscopy to assess the location and extent of the lesion during procedure, another for insertion of gastric tube to reduce the risk of reflux. During SBA for cervical tracheal surgery, without endotracheal tube obstructing recovery phase is a potentially risky period. After the surgery, a chin stitch would be used to keep the neck in flexion to decrease the tension on the anastomosis. Patients have better tolerance to the LMA, reducing the rates of coughing or head movement. In addition, the analgesia of the superficial CPB can last until the recovery phase, the patients were more comfortable, safer during recovery period.

Ethical Statement: The authors are accountable for all aspects of the work in ensuring that questions related to the accuracy or integrity of any part of the work are appropriately investigated and resolved. The study was approved by The First Affiliated Hospital of Guangzhou Medical University (No. 2015K12).