Acute coronary syndrome (ACS) is a common fatal disease responsible for millions of deaths worldwide (1). In recent years, the prognosis of ACS patients has been dramatically improved due to the broad and early application of percutaneous coronary intervention (PCI), as well as innovations in pharmacotherapeutic regimes (2-6). Nevertheless, repeat revascularization due to in-stent restenosis (ISR) and plaque progression remains a relevant problem, which deteriorates the long-term outcomes of ACS patients (7-9). To improve the interventional efficacy, numerous modifications of drug-eluting stents (DES) and PCI procedure strategies have been developed, such as the utilization of biodegradable polymers and ultra-thin struts (10-12) and the double kissing crush technique (13,14). Meanwhile, it is of great clinical significance to identify high-risk ACS patients who may require repeat revascularization because these patients demand more intensive secondary prevention.

Dyslipidemia, including elevated triglycerides (TG), total cholesterol (TC), low-density lipoprotein cholesterol (LDL-C) or decreased high-density lipoprotein cholesterol (HDL-C), contributes to the increased risk of developing coronary artery disease (CAD) and has attracted tremendous attention from clinicians. Emerging evidence increasingly suggests that some indexes generated from lipid parameters (i.e., the TG/HDL-C ratio) possess advantages in stratifying the risk of cardiovascular disease compared to individual indexes, such as TG, TC, LDL-C, and HDL-C (15-17). The TG to HDL-C (TG/HDL-C) ratio, as an atherogenic index, has been highly correlated with myocardial infarction and coronary heart disease (18-20). Recently, accumulating studies support the use of the TG/HDL-C ratio as a prominent and accessible indicator of insulin resistance and metabolic syndrome (21,22). However, in the contemporary DES era, the predictive value of the TG/HDL-C ratio regarding repeat revascularization in ACS patients after a first-time successful PCI remains unclear.

The previous studies indicated that repeat revascularization events often occurred in the first year after DES (23). In this retrospective study, we analyzed the clinical characteristics of ACS patients who had coronary angiography performed during the period from 6 to 12 months after a first-time PCI, especially focused on the TG/HDL-C ratio, in order to identify the risk factors for a repeat PCI and enhance the long-term prognosis of ACS patients.

Consecutive ACS patients who had coronary angiography performed again during the period from 6 to 12 months after a first-time PCI from January 2014 and March 2019 in Zhongda Hospital were enrolled in the study. The inclusion criteria were: (I) ACS was the indication for the PCI procedure; (II) it was a first-time PCI; (III) the PCI procedure and DES implantation were successful; and (IV) informed consent was obtained from the patient. The exclusion criteria were: (I) the PCI procedure failed; (II) a previous history of angioplasty; (III) coronary angiography was not performed during the period from 6 to 12 months after a first-time PCI; and (IV) the patient failed to take the prescribed medications according to the doctor’s instructions during the follow-up period. According to the repeat PCI events, the patients were stratified into the event (+) group (n=101) and the event (−) group (n=170).

Demographic data, medical history, and vital signs were accurately collected by the clinicians. Blood samples were obtained for laboratory analyses at admission. The laboratory results for erythrocyte, leukocyte, platelet, neutrophils, and lymphocyte counts, as well as random glucose, serum creatinine, TG, TC, LDL-C, and HDL-C, were obtained from the electronic medical record system. Ultrasonic cardiograms were performed before discharge.

All ACS patients were administrated a loading dose of 300 mg aspirin and a P2Y12 receptor inhibitor (300–600 mg clopidogrel or 180 mg ticagrelor) and were maintained with 100 mg of aspirin and 75 mg of clopidogrel daily or 90 mg of ticagrelor twice per day. PCI procedures were performed for any lesions in the presence of ischemic symptoms or objective ischemic signs and angiographic luminal diameter stenosis ≥50%, and any lesions with luminal diameter stenosis ≥70% by quantitative coronary angiography. PCI procedural decisions were made according to the consensus of three experienced operators. Beta-blockers, angiotensin-converting enzyme inhibitors (ACEIs) or angiotensin receptor blockers (ARBs) and statins were recommended during hospitalization and the follow-up period. A dual antiplatelet regimen was suggested for twelve months and all ACS patients who underwent PCI procedures were recommended to have a coronary angiography during the period from 6 to 12 months after their PCIs.

The normally distributed continuous variables are presented as means ± standard deviation. Student’s t-tests were applied to analyze the continuous variables. The categorical variables were compared using chi-squared tests. Fisher’s exact test was preferred when more than 25% of the values showed expected frequencies <5. Variables with P values <0.2 were entered into univariate or multivariate Cox proportional hazard model analysis. Hazard ratio (HR), 95% confidence interval (CI), and P value were used to evaluate the effects of the variables on repeat revascularization. All statistical analyses were two-tailed and performed with SPSS 21.0 (IBM Corporation, Armonk, NY, USA). Differences were statistically significant at P<0.05. 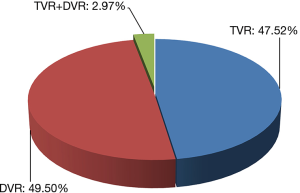 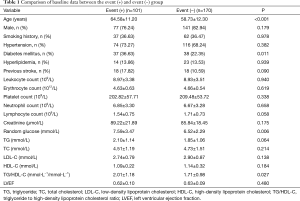 Characteristics of the interventional procedure and drug therapy 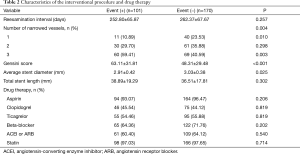 As illustrated in Figure 2, the subgroup analysis showed that higher TG/HDL-C ratios were associated with a significantly higher risk of repeat PCIs in the male, hypertensive, and diabetes mellitus subgroups.

In the present retrospective study, we evaluated the risk factors in the ACS population that required repeat revascularization. We validated for the first time that the TG/HDL-C ratio was independently associated with repeat PCIs in Chinese ACS patients, especially in the male, hypertensive, and diabetes mellitus subgroups.

As an epochal invention in the field of coronary interventional therapy, DES significantly decreases ISR by locally suppressing the inflammatory response and inhibiting the proliferation and migration of smooth muscles (29). However, repeat revascularizations are still required in certain PCI patients, not only due to ISR, but also the exacerbation of non-target lesions. Our data demonstrated that TLR accounts for 20.79% and DVR occurs in 52.47% of the ACS patients who received repeat PCIs. The results indicate that, with the upgrading of interventional instruments and continuous enhancement of cardiologists’ technology, the influence of PCI procedures on repeat revascularization is decreasing. The proportion of DVRs, which was more than 50%, suggests that intensive attention to modifying the risk factors for atherosclerosis exacerbation is warranted.

Individual factors in the PCI patients, such as age, gender, smoking, dyslipidemia, and diabetes mellitus, may significantly impact the need for repeat revascularization. In terms of the characteristics of the target lesions, the length and diameter of the diseased vessels, calcified lesions, and chronic totally occluded lesions are all related to target lesion failure (30). Our data showed that the Gensini score was positively correlated with repeat PCIs (HR =1.012, 95% CI: 1.005–1.018, P<0.001 for each higher Gensini score unit), which is consistent with previous conclusions (8). Undoubtedly, ACS patients with complex lesions require more intensive secondary prevention after a first-time PCI.

As an easily accessible parameter in routine clinical practice, the TG/HDL ratio may act as a powerful predictor for worse clinical outcomes and cardiovascular events. Turak et al. reported that high TG/HDL-C ratios were correlated with more fatal events and major adverse cardiovascular events (MACEs) in patients with essential hypertension (31). Several studies have suggested that an elevated TG/HDL-C is a useful predictor for future cardiovascular events in patients with diabetes mellitus or chronic kidney disease (32-34). Despite these findings, studies focusing on the relationship between TG/HDL-C ratios and repeat PCIs in the Chinese population are scarce. In this study, we showed that the TG/HDL-C ratio was an independent predictor of repeat revascularization in Chinese ACS patients after first-time PCIs (HR =1.206, 95% CI: 1.016–1.431, P=0.032 for each higher TG/HDL-C ratio unit). Although the underlying mechanisms have not been clearly elucidated, certain speculations for how the TG/HDL-C ratio predicts a repeat PCI can be made. First, the simultaneous application of TG and HDL-C in the ratio reflects the balance between atherogenic and protective lipoproteins and could be effective for evaluating plasma atherogenicity (35,36). Second, certain research has validated that the TG/HDL-C ratio could serve as a surrogate marker of insulin resistance, which contributes to the progression of coronary atherosclerosis (21,37,38). In addition, in spite of no direct evidence, a correlation between inflammation and the TG/HDL-C ratio has been reasonably suggested (31,34). Therefore, in theory, combining TG and HDL-C to create a ratio may be a better way to estimate the risk of repeat revascularization.

Certain limitations should be claimed here. First, this retrospective cohort study could not avoid case selection bias. Second, our study sample was from a single center and relatively small. The findings should be confirmed with further multicenter studies. Third, some factors which may influence the requirement for repeat revascularization were not included, since they were not measured in every patient.

In conclusion, DVR accounts for a significant proportion of ACS patients who received repeat PCIs. Therefore, intensive attention to modifying the risk factors for atherosclerosis exacerbation is warranted. After adjustment for confounding factors, the TG/HDL-C ratio and Gensini score remain independent risk factors of repeat revascularization in ACS patients after first-time successful PCIs.

Ethical Statement: The authors are accountable for all aspects of the work in ensuring that questions related to the accuracy or integrity of any part of the work are appropriately investigated and resolved. The study was approved by the IEC for Clinical Research of Zhongda Hospital, Affiliated to Southeast University (No. 2017ZDSYLL023-P01).