The treatment of human cancer is shifting toward precision medicine, of which molecularly targeted therapy aimed at the genomic status of the tumor in each patient is a typic modality. Several drugs that target molecular pathways are available for patients with non-small cell lung cancer (NSCLC) harboring the relevant gene alterations.

ALK/ROS1 inhibitors is another group of targeted drugs utilized mostly for the treatment for lung cancer patients with ALK- or ROS1-rearrangement (16,17). EML4-ALK fusion is present in approximately 4–6% of all NSCLC patients (18,19), and ROS1 rearrangements are present at an even lower frequency (1–2%) (18-20). In clinical application, the results of the ALK rearrangement by fluorescence in situ hybridization (FISH) and IHC are compared with each other to find the exact result (21). Positive staining of ROS1 by IHC should be double-checked by molecular assays to exclude false-positive cases because the specificity of IHC testing is not good enough (22). Massively parallel NGS assays are used in some clinical diagnostics to test for gene rearrangements (23,24).

In addition to the alterations of the three most common genes described above, some other lung cancer-related genes also play important roles. The EGFR pathway through RAS-RAF-MEK-MAPK and PI3K-AKT-mTOR can be activated by mutations in KRAS, NRAS, BRAF, ERBB2, RET, MET, FGFR1, or PIK3CA, resulting in resistance to TKIs (25-28), and TP53-inactivating mutations could disrupt its key function and are associated with poor prognosis (29).

If all the above molecular alterations need to be detected, a large amount of tumor tissue is necessary, with the exception of NGS. NGS has a considerable advantage in genetic mutation detection, but its sensitivity and accuracy of gene rearrangement detection are not clear. The aim of this study is to integrate the gene mutation and rearrangement alterations in a single targeted NGS panel to investigate the relevant gene alterations, and assess the accuracy of the NGS platform based on the integrated panel.

Formalin-fixed, paraffin-embedded (FFPE) tumor tissues from 107 NSCLC patients were collected from the Department of Pathology, Peking University First Hospital between April 1, 2018 and July 31, 2018. Characteristics of these patients were listed in Table 1. Thirty-three cases were core needle biopsies, 16 cases were bronchoscopic biopsies, and 58 cases were surgical resection specimens. All specimens were fixed in 10% neutral buffered formalin overnight. Sectioned tissues were routinely embedded in paraffin. For the patients with ALK or ROS1 fusion, response to the targeted drugs were recorded. The present study was approved by the Ethics Committee of Peking University First Hospital {No. 2016[1111]}. 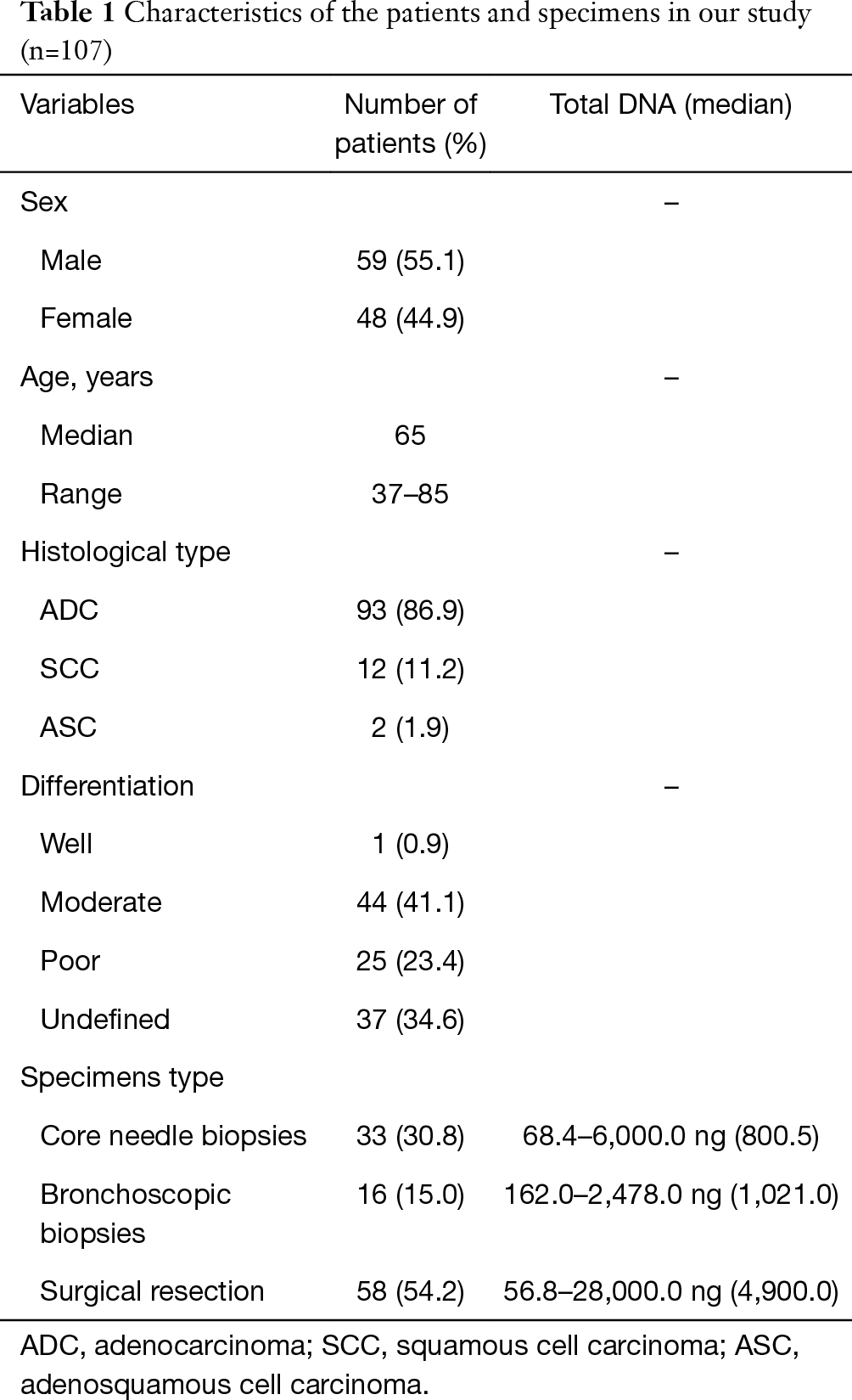 Figure 1 Immunohistochemical staining of EGFR, ALK, and ROS1 in four different cases of lung adenocarcinoma, all of which were consistent with NGS results. Diffuse and strong cytoplasmic and membranous staining of tumor cells with EGFR L858R-specific antibody 43B2 (row A) and EGFR E746_A750-specific antibody 6B6 (row B), and diffuse and strong cytoplasmic staining of tumor cells with ALK (D5F3) antibody (row C) and ROS1 (D4D6) antibody (row D), which were negative for the other three antibodies in each case. Scale bar, 100 µm. NGS, next-generation sequencing. 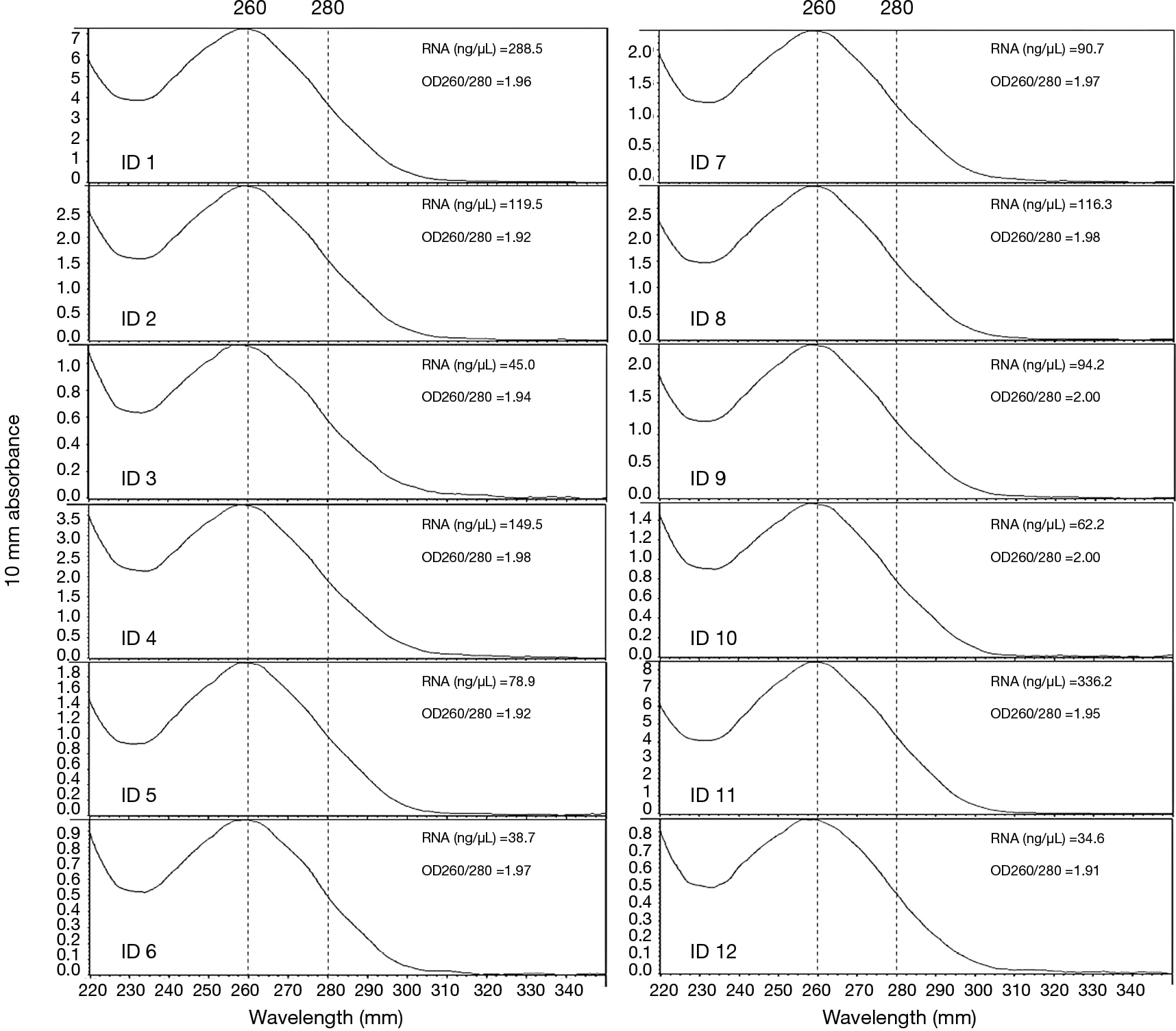 Figure 2 The quantity and purity of RNA extracted from 12 cases.

ARMS PCR was performed on 40 cases using the AmoyDxTM Human EGFR Mutation Detection Kit (Amoy Diagnostics, Xiamen, China) for the detection of EGFR mutations in DNA sample, and was also performed on 12 RNA samples using the AmoyDxTM Human EML4-ALK/ROS1 Gene Fusions Detection Kit (Amoy Diagnostics) for the detection of ALK/ROS1 rearrangements. Each sample was detected with an external control assay and a mutation assay in the same well, while each run contained a negative control and a positive control. The amplification was set up according to the manufacturer’s instructions using the ABI 7500 real-time PCR system (Applied Biosystems, Foster City, CA). The final run files were also analyzed and interpreted according to the manufacturer’s instructions.

DNA mutations in all patients 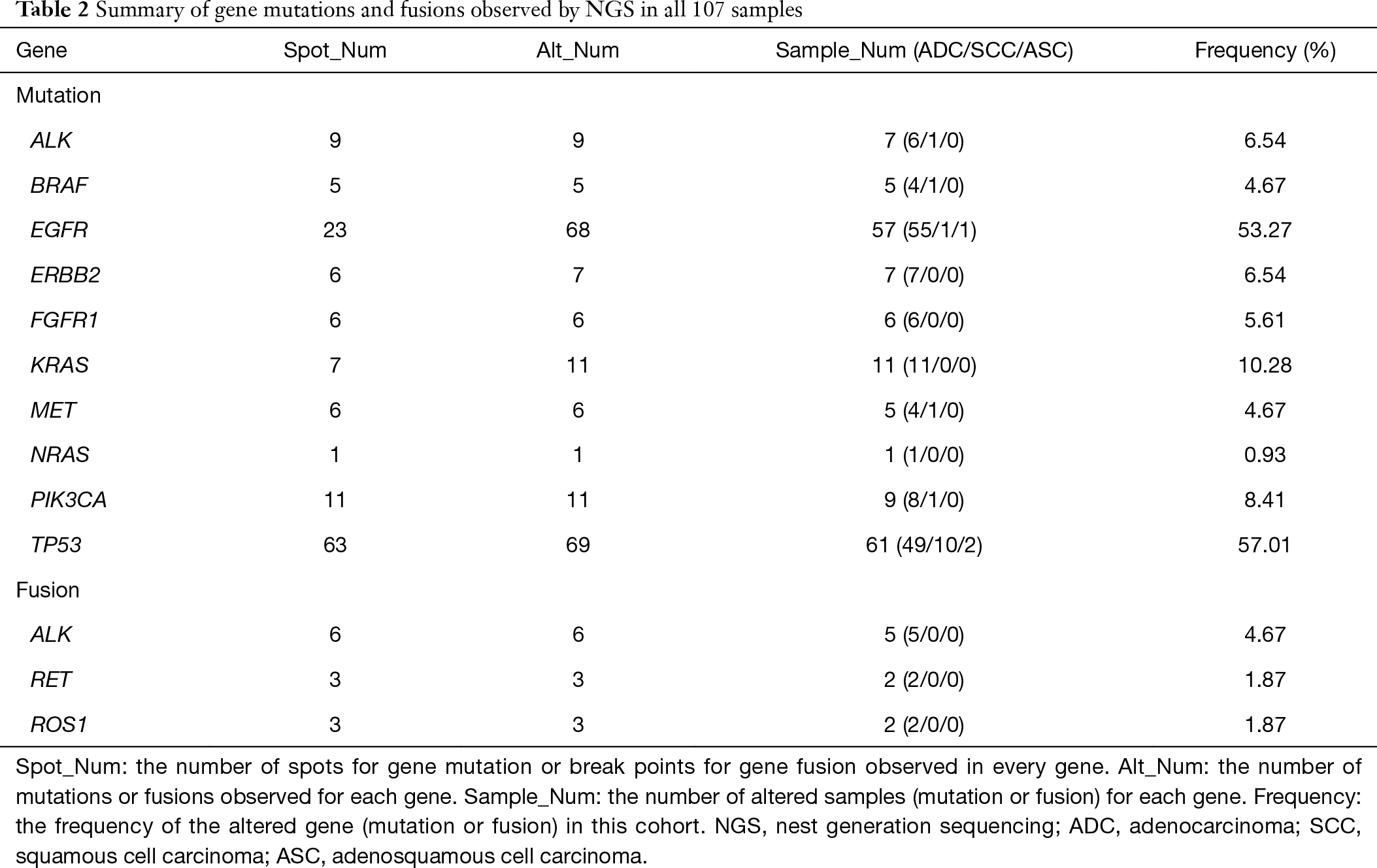 To assess the sensitivity and specificity of NGS for related gene alterations, we used ARMS to double check the gene status of EGFR for 40 cases, and ALK and ROS1 for 12 cases (Table 3). For one individual (ID 4), an EGFR G719C mutation found by NGS was not confirmed by ARMS. For patient ID 5 and ID 37, EGFR G719X mutations were observed by ARMS without distinguishing which nucleotide (adenine, thymine, or cytosine) replaced the guanine, whereas the results of NGS showed that guanine in 719 was changed into an adenine (G719A). Similarly, EGFR exon 20Ins was observed by ARMS in sample ID 6, and NGS discovered the inserted amino acid sequence and its position, which was shown as M766MASV. For other cases, the results of gene status of both mutations and fusions in the scope of the PCR kit detected by ARMS were completely consistent with that of NGS.

Concordance between NGS and IHC detection 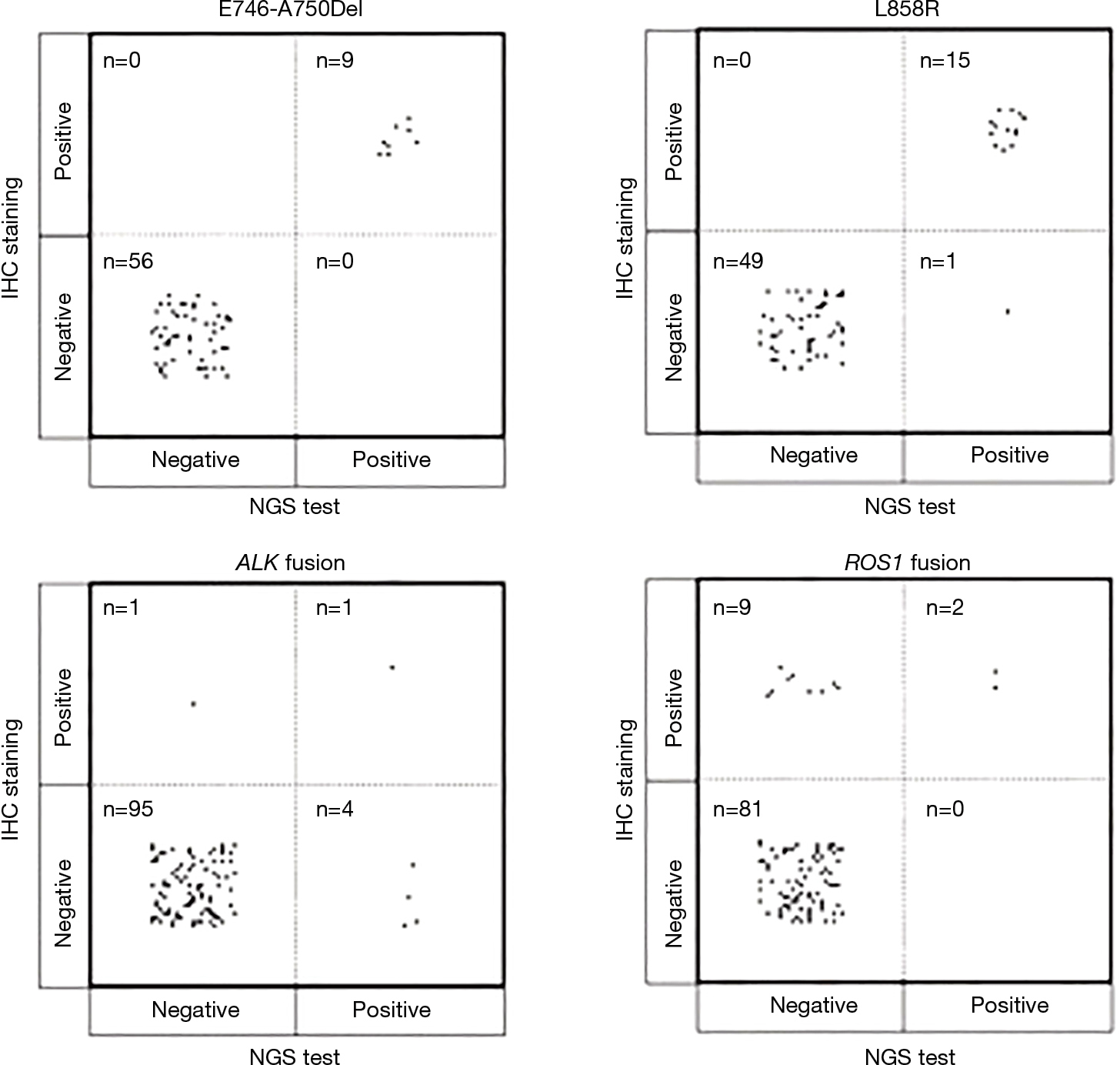 Figure 3 Results of IHC staining and NGS for the EGFR E746-A750Del, L858R, ALK, and ROS1 detection. “n” in the figure indicates the number of samples. IHC, immunohistochemistry; NGS, next-generation sequencing.

ALK rearrangement detection by IHC revealed two positive samples (2/101, 1.98%), whereas 5 positive samples were found by NGS (5/101, 4.95%). Among these ALK-positive samples, positive results by both IHC and NGS were shown in only one case (Figure 3), of which the disease was controlled stable after receiving therapy with alectinib (Table 5). For 5 of the 6 patients with ALK rearrangement revealed by either NGS or IHC, their tumors were all controlled stable or regressed after treatment with ALK inhibitors like crizotinib and alectinib (Table 5), indicating the facticity of all these results of ALK rearrangement. Based on this hypothesis, sensitivity (83.33%) of NGS was much higher than that (33.33%) of IHC (Table 4). The Cohen’s κ value of 0.265 suggested a low concordance between these two methods in ALK detection. 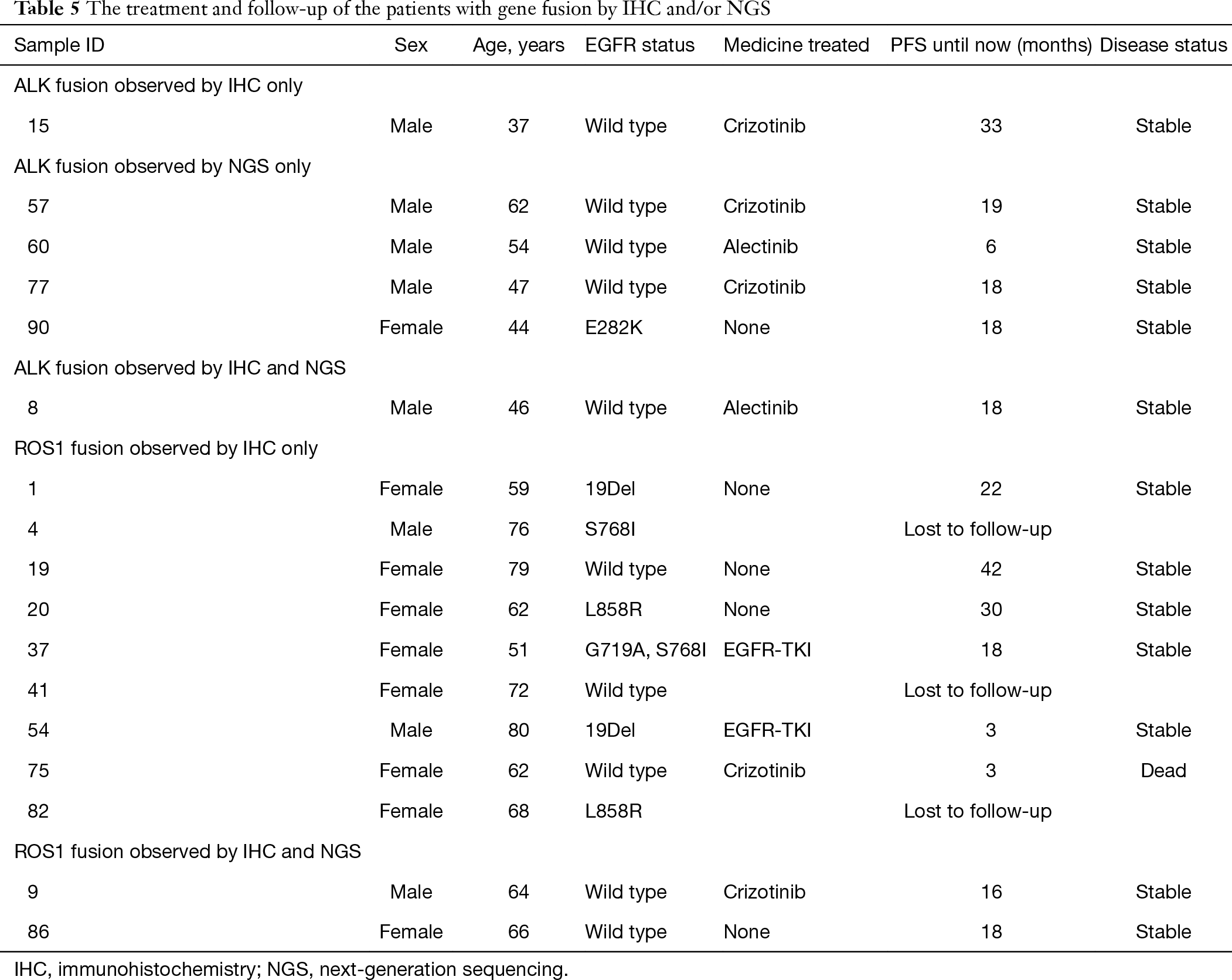 In this study, the NGS panel included not only the mutations found frequently in lung cancer but also 3 “druggable” fusion genes (ROS1, ALK, and RET) by a single NGS test with only 50 ng DNA. The genetic status in our study was in accordance with those in previous studies of NSCLC. For example, EGFR and TP53 mutated most frequently among these related genes (30,31), L858R and 19Del were the most common hot spots of the EGFR gene in NSCLC (6), and TP53 mutations were more prevalent in SCC patients than in ADC patients (31). Additionally, a high concordance was found between the results observed by ARMS and NGS, but more detailed information was revealed by NGS. All these items suggested the high reliability of the NGS experiments employed in our study.

For the results of EGFR L858R and E746-A750Del detected by NGS test, IHC staining showed almost the same results for these two molecular statuses. Previous studies (32,33) used two different rabbit monoclonal antibodies recognizing the EGFR mutations in exon 19 (E746-A750Del) and exon 21 (L858R) and showed a high sensitivity (91.5–93%) and specificity (100%) of IHC staining for L858R in comparison with direct sequencing. Our present study suggested that both IHC and NGS techniques are reliable for the clinical use of EGFR L858R detection. The unique type of DNA change for the mutation of L858R may contribute to the high consistency between IHC and direct or NGS sequencing. However, direct sequencing can find several types of DNA changes around the EGFR E746-A750 region, some of which could give different amino changes when detected with the antibodies used in IHC staining, resulting in a lower sensitivity (63–77%) of E746-A750Del by IHC compared with direct sequencing in the previous studies (32,33) mentioned above. According to the NGS results, we could distinguish the different types of alterations in this region. We could also easily detect the exacted DNA changes occurring in the E746-A750Del, which could be observed by IHC staining with the mutation-specific antibody, and improved the consistency of IHC and NGS to 100% in our study. At the same time, more information, including single nucleotide variants (SNVs) in exons 18–21 and other types of EGFR 19Del, could be determined by NGS, thereby predicting the response to the EGFR-TKIs more reliably, rather than IHC staining (34).

The results of the ALK fusion detection by NGS showed an acceptable frequency of 4.7%, which was similar to the reported rate of 4–8% (18,19). Detection of ALK rearrangement by protein-based IHC staining usually showed a higher sensitivity than other methods, such as DNA-based FISH and mRNA-based RT-PCR (35). The criteria for FISH positive results are artificial and depend too much on the subjectivity of the pathologist (18). The RT-PCR method relies on primers that cannot consider all types of ALK fusion. However, any effective fusion will result in the fusion protein, which can be observed by IHC staining. NGS shows a higher sensitivity than FISH in detecting ALK rearrangements (36). However, no matter whether IHC staining, NGS, FISH or RT-PCR was used, it cannot achieve an accuracy rate of 100% on the ALK rearrangement detection (37). In our study, one sample was ALK positive for IHC staining but negative for NGS, of which the break point of ALK in this sample may be outside of the panel used in the NGS test. And this ALK fusion was confirmed to be true positive by the response of the patient to the targeted therapy. In contrast, ALK fusion identified by NGS but negative by IHC staining were found in four individuals, most of which the reality of these gene fusion was confirmed by their responses to the targeted treatment. Based on these results, ALK positive by either IHC or NGS deserved serious consideration. While in the situation of ALK negative identified by IHC or NGS only, more targeted methods like FISH and RT-PCR should be performed to avoid missing the potential opportunity to benefit from the targeted drugs.

In our study, 11 samples (11/92, 11.96%) were positive for ROS1 by IHC staining, of which 9 samples were ROS1 negative by NGS. The positive rate of ROS1 by IHC staining in our study was unrealistically higher than that detected by NGS (1.87%), as well as that reported in existing publications (1–2%) (18-20). It was extremely rare that patients harbor both EGFR mutation and ROS1 fusion. There was only one reported case that simultaneous L858R mutation and ROS1 fusion occurred in a single NSCLC patient with intrinsic gefitinib resistance (38). In our cohort, more than a half of samples with ROS1 fusion identified by IHC only showed simultaneous EGFR mutation by NGS or ARMS PCR, 2 of whom responded to the EGFR-TKI, which made the IHC results extremely suspicious. In previously published studies (18,39), ROS1 positive rates were commonly presented with different results when multiple methods were used in one cohort, and it has been suggested that IHC was not sensitive enough to determine ROS1 rearrangement. ROS1 staining could be observed in certain nonneoplastic conditions, including normal pneumocytes and bronchiolar metaplasia, which might result in false-positive staining for ROS1 rearrangement detection by IHC staining (40,41). Our results were in concordance with the conclusion that the sensitivity of ROS1 detection by IHC staining is much better than its specificity (22,39). IHC is an effective screening method for avoiding other redundant analyses in patients with ROS1 negative results (39). However, for ROS1-positive samples detected by IHC staining, it is necessary to perform other analyses, such as FISH or NGS, for further validation.

Various gene mutations and gene rearrangements could be detected by a single platform of NGS, which showed high performance and cost-effectiveness. NGS could provide more informative and reliable results than IHC staining for EGFR gene alterations, especially for the exon 19 region. For gene fusion detection, NGS increased the positive rate of ALK and decreased the false-positive results of ROS1 compared with IHC staining. Thus, we suggest that in the samples with ALK negative and/or ROS1 positive observed by IHC only, it is necessary to perform other analyses like NGS for confirmation.

We thank all researchers for their contributions in this study, including those whose relevant contributions were not cited due to space limitations.

Funding: This work was supported by Beijing Municipal Science and Technology Commission (No. Z181100001918007).

Ethics Statement: The authors are accountable for all aspects of the work in ensuring that questions related to the accuracy or integrity of any part of the work are appropriately investigated and resolved. The study was approved by the Ethics Committee of Peking University First Hospital {No. 2016[1111]}. Ethics approval and informed consent to participate were given by all patients in writing.