Between March 2015 and May 2018, we enrolled 142 consecutive PSP patients who underwent VATS bullectomy using autosutures in our hospital. PSP was defined as a pneumothorax without underlying lung diseases. Cases with a lack of clinical data, cases without complete resection of bullae, or cases without confirmed bullae were excluded. For cases without complete resection due to hilar, interlobar or multiple bullae, additional abrasion or covering was performed. In total, 91 cases were retrospectively evaluated (Figure 1). The factors preventing postoperative recurrence were evaluated using the Kaplan-Meier method and the inverse-probability of treatment weighted (IPTW) method by propensity score was also used to adjust for heterogeneous patient backgrounds. The 11 predicted factors preventing postoperative recurrence consisted of the following: age, gender, operation side, smoking habit, history of ipsilateral surgery, body mass index (BMI), bulla size, bulla type, pleural reinforcement by covering absorbable sheet, use of fibrin glue, and the margin distance of bullectomy. For margin distance, we defined the cut-off point of 5.0 mm, which is approximately half of the short diameter of the autosuture. The cut-off points of other continuous variables such as age and BMI were defined according to the median. Bulla size was defined as the maximum root length of bulla by high resolution computed tomography (HRCT) in Figure 2. For bulla size, we defined the cutoff point of 10.0 mm, which is approximately the median size. For bulla type, deep bulla was defined as bulla in which the internal depth was larger than the external size in Figure 2. Bulla, other than deep bulla, was defined as non-deep bulla. As an exploratory study, four subgroups—bulla size <10, ≥10 mm, non-deep bulla, and deep bulla were evaluated using univariate analysis. 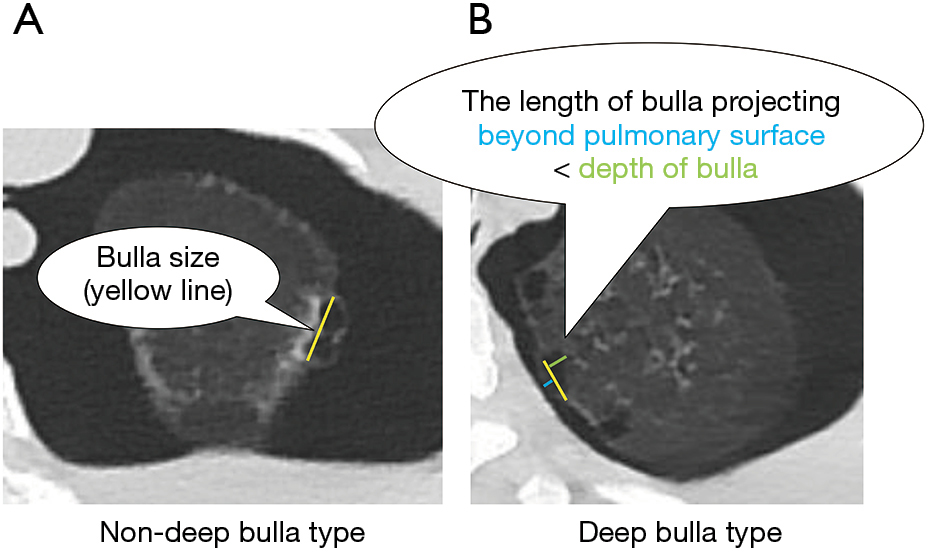 Figure 2 (A) Definition of bulla size, and (B) definition of deep bulla on high-resolution computed tomography (HRCT).

The patients underwent VATS according to the following indications: ipsilateral PSP recurrence, a persistent air leak after chest tube drainage, contralateral PSP, hemopneumothorax, tension pneumothorax, and patient request. All procedures were performed by a single surgical team. The patient was placed in a lateral position under general anaesthesia with ventilation of one lung. According to the difficulty of VATS, the choice of procedure (single- or multi-port) was made as we previously described (13,14). The bullae to be resected were decided from preoperative HRCT and intraoperative findings. The bullae were resected by autosuture (Echelon FLEX, JJKK, USA or Endo-GIA, Covidien, USA, depending on the surgeon’s decision) with a margin distance, which was decided by the surgeon when the team was certain that no residual bullae were present through the thoracoscopic view. 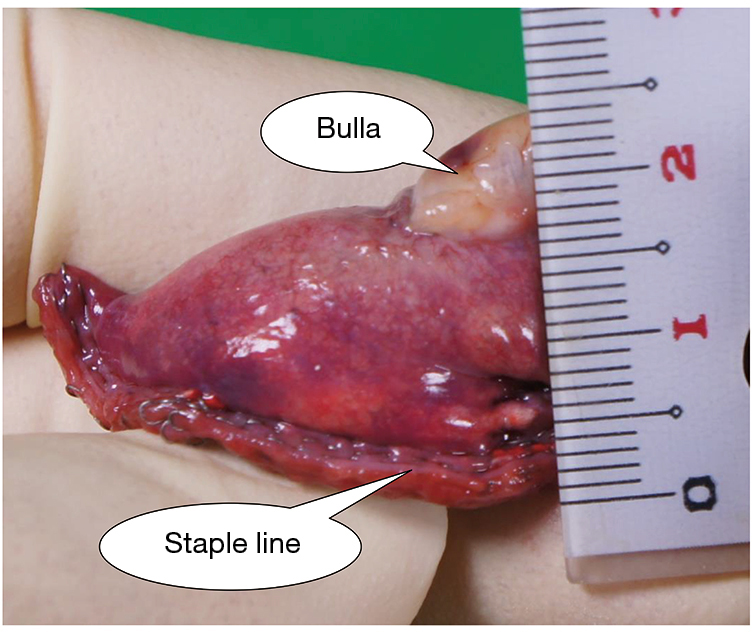 Figure 3 Method of measurement for margin distance of bullectomy.

Subsequently, we performed a water submersion test, which involved inflating the lung under 20 cm of water pressure, to detect any persistent air leakage. When an air leak was detected, additional resection or fibrin glue was used. The staple line was covered with oxidised regenerated cellulose (ORC) and/or polyglycolic acid (PGA) sheet to prevent postoperative recurrence of PSP without suspected intrathoracic infection. If necessary, fibrin glue was also used to fix the absorbable covering sheets on the visceral pleura. Depending on the surgeon’s preference, fragility of the lung, presence of air leakage during surgery, covering materials and fibrin glue were selected. If there were no clear findings of intrathoracic infection, a pleural coating using 50% glucose was performed, as we previously described, to reduce postoperative recurrence (1). After placing a chest tube in the intrathoracic cavity, the wound was closed. Then, the chest tube was connected to an aspiration system and negative suction of 10 cmH2O was applied.

We removed the chest tube after postoperative day one, when the air leak was stopped, and no bloody effusion was detected regardless of the volume of effusion. Even for asymptomatic patients, chest radiography or computed tomography was performed every 3 months postoperatively for 12 months. If symptoms appeared, patients visited our institution without reservation. Regardless of the intervention, even a case of minimal lung collapse confirmed on imaging was considered as recurrence. The follow-up was continued for 1 year after surgery; those who could not be followed up till then were censored on the date of the last follow-up. The follow-up period was started from the date of operation. Morbidity or mortality associated with our procedures was evaluated according to The Japan Clinical Oncology Group postoperative complication criteria based on Clavien-Dindo classification (15). According to the criteria, grade IIIb or more is needed for invasive procedures under general anaesthesia; therefore, the adverse events that corresponded to grade IIIb or more were defined as severe morbidity.

Statistical analyses were performed using the Welch test and the Fisher’s exact test. Continuous variables were represented as mean ± standard deviation. Univariate analysis of the postoperative recurrence rate for PSP was estimated based on the Kaplan-Meier method and compared by the log-rank test. For a propensity score analysis, the Cox regression analysis using IPTW method was performed. A P value of <0.05 indicated statistical significance. The hazard ratio (HR) and 95% confidence intervals (CIs) were calculated for each variable using Cox regression analysis. EZR software package (http://www.jichi.ac.jp/saitama-sct/SaitamaHP.files/statmed.html) was used for all statistical analyses. This study was approved by the institutional review board of Takasago Municipal Hospital (No. 2018-3), and informed consent was obtained through the hospital website with an opt-out option. 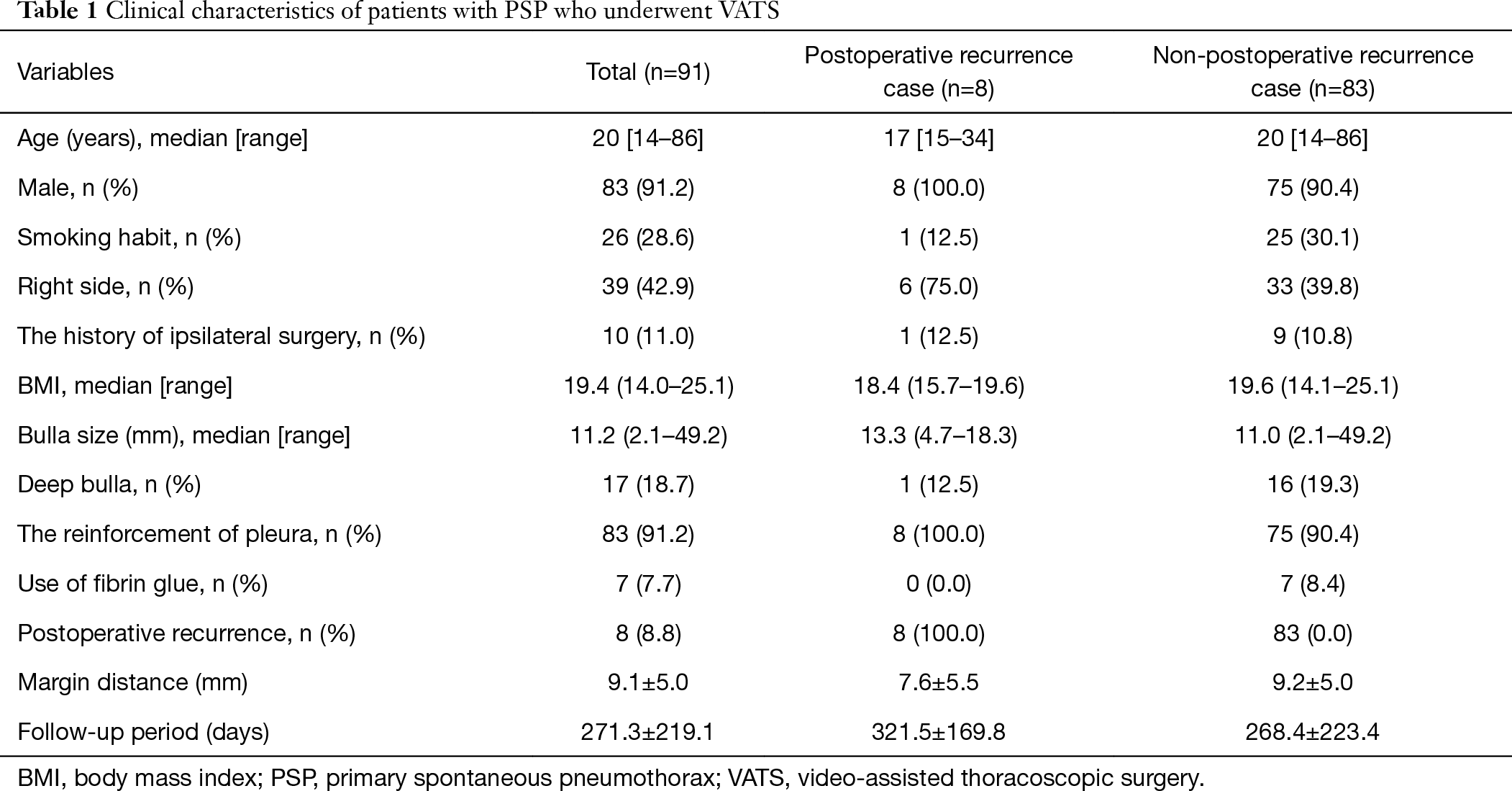 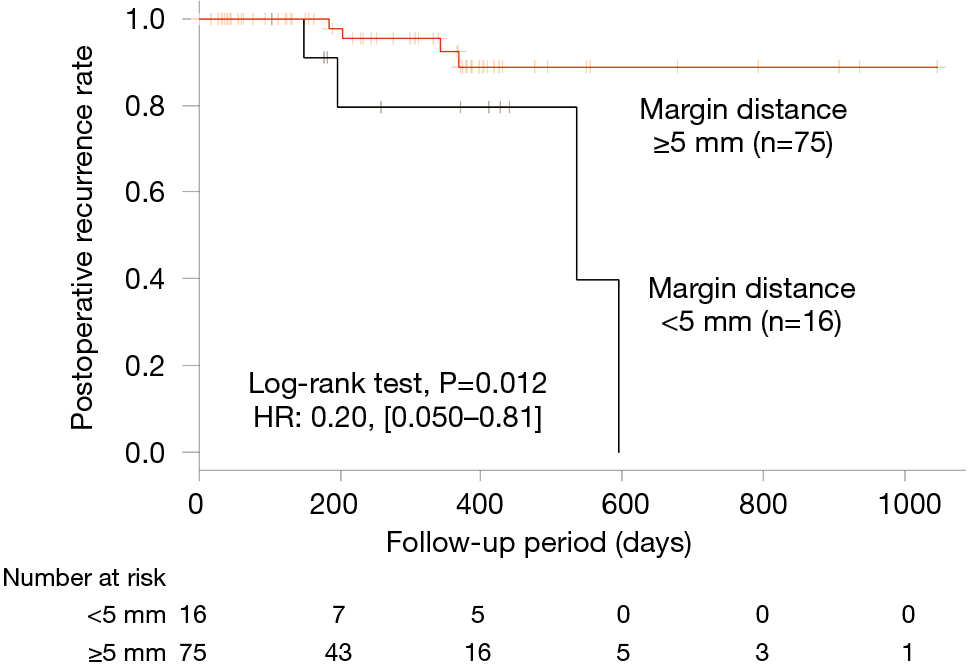 Due to the retrospective nature of our study, the patient backgrounds were heterogeneous. Recently, for a retrospective study, the IPTW method by propensity score was used to adjust patient backgrounds (1,14,17). Hence, we also used the IPTW method to evaluate the relationship between the margin distance and the postoperative recurrence, in addition to the Kaplan-Meier method and Cox regression analysis.

Our study has some limitations. It was carried out at a single institution, and it had a retrospective design. Despite performing the IPTW method to adjust the heterogeneous patient backgrounds, unknown factors that might affect the postoperative recurrence could not be adjusted. Therefore, we think a prospective study including patients from multiple institutions is required. Although we evaluated the subgroup analysis as an exploratory study considering the bulla size and type, the number of cases was very small. In a future study, we plan to recruit a larger number of cases to circumvent these issues.

This study suggested that an optical margin distance of ≥5.0 mm in bullectomy reduced the postoperative recurrence of PSP.

Ethical Statement: The authors are accountable for all aspects of the work in ensuring that questions related to the accuracy or integrity of any part of the work are appropriately investigated and resolved. This study was approved by the institutional review board of Takasago Municipal Hospital (No. 2018-3), and informed consent was obtained through the hospital website with an opt-out option.