Fat tissue, the so-called “new endocrine organ”, has metabolic and mechanical effects on physical function (1-3). The accumulation of fat in specific parts of the body, including the upper body, and the central body or abdomen, has been shown to a crucial risk factor for cardiovascular and metabolic problems (4-6). Several previous studies have demonstrated that increased fat deposition around the heart is related to inflammatory marker levels and both morbidity and severity of cardiovascular diseases (7-10).

An association between local fat disposition and lung function has been suggested. Increased thoracic fat volume assessed from the pericardial fat volume correlated with impaired lung function measured using pulmonary function test, particularly with a restrictive pattern (11). Given the close proximity of thoracic fat to the pulmonary vasculature and lung parenchyma, thoracic fat may affect lung function. Furthermore, markers of abdominal obesity, such as waist circumference and abdominal height, have been reported to be negatively associated with lung function in the general population (12). However, there were differences in the targeted local fat compartment and fat measurement methods in previous studies, which may have conflicting results regarding the relationship between lung function and thoracic fat, as well as abdominal fat (13,14).

This cross-sectional study included subjects between 18 and 80 years of age who underwent both chest and abdominal CT and a pulmonary function test within 2 days of a health-screening program examination at the Medical Healthcare Center of Dongguk University in South Korea from June 2012 to June 2016. All subjects voluntarily received the health screening to assess their health. Subjects with a history of chronic respiratory diseases (chronic obstructive pulmonary disease, asthma, interstitial lung disease, and primary or secondary lung malignancy) or those with incomplete information were excluded (Figure 1). The study protocol was approved by the Institutional Review Board of Dongguk University Ilsan Hospital (2016-146). 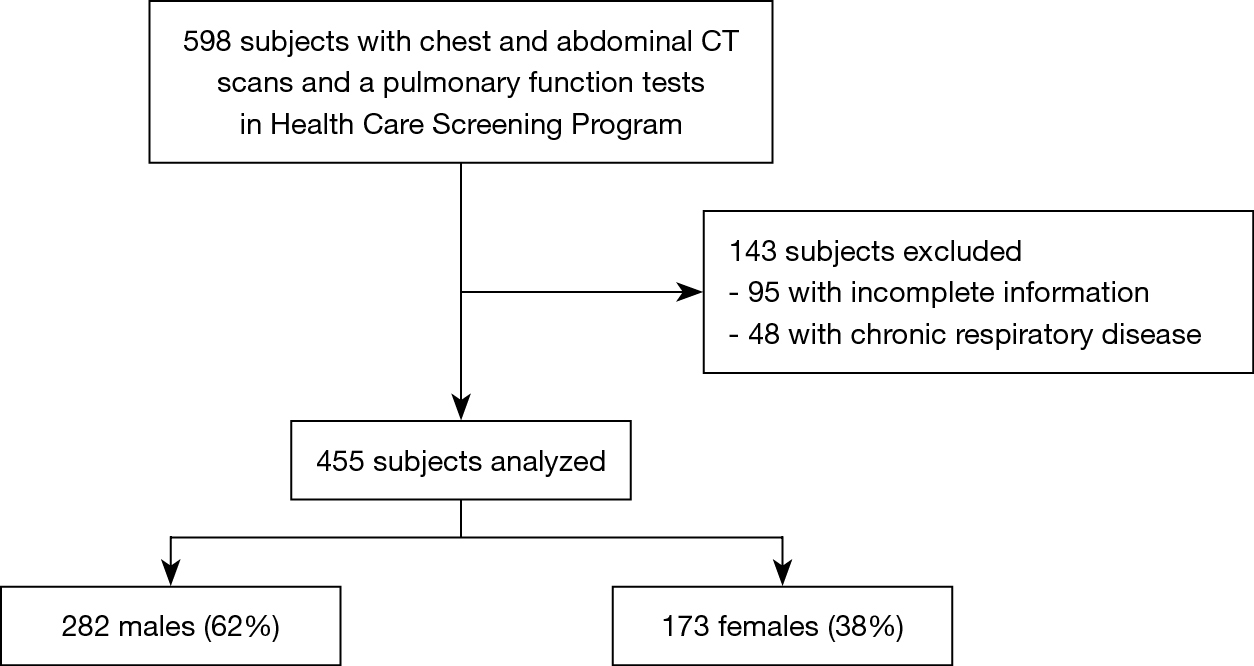 CT was performed with subjects in the supine position using a 64-channel multi-detector CT scanner (Siemens Medical Solutions, Forchheim, Germany). Fat volumes were measured using a dedicated offline workstation equipped with semi-automated image segmentation software implemented in the analysis software version 10.0 (Biomedical Imaging Resource, Mayo Foundation, Rochester, MN, USA). Thoracic fat volumes included pericardial fat, intrathoracic fat, and subcutaneous thoracic fat. Abdominal fat volumes included visceral and subcutaneous abdominal fat. Intrathoracic fat and pericardial fat, which are considered as the thoracic visceral fat, were defined as previously described (9,16). Briefly, total thoracic fat refers to any fat tissue located within the thorax from the level of the bifurcation of the pulmonary artery trunk to the diaphragm, and from the anterior chest wall to the descending aorta. Pericardial fat refers to all fat tissue located within the pericardial sac, with the same cranial and caudal boundaries. Intrathoracic fat volume was assessed by subtracting pericardial fat volume from total thoracic fat volume (Figure 2A,B,C,D) (9,17). Although there is little consensus about how to measure subcutaneous thoracic fat, we measured it on the first axial CT image above the aortic arch. First, the superior aspect of the aortic arch was visually identified, and then the first axial image above the arch was selected by scrolling toward the apex of the lungs. Its volume was calculated by subtracting the fat tissue volume in the thoracic cavity from the entire fat tissue volume in the predefined lateral boundary in the first axial image above the arch, as previously described (Figure 2E,F) (18). With manual segmentation, the lateral boundary was outlined at the lateral edge of the scapular bone because a considerable number of object slices could not cover the entire circumference of the chest; in addition, it enabled the inclusion of the maximum possible area Pixels with Hounsfield unit (HU) values of −200 to −40 within the selected region were defined as adipose tissue in the thorax (19). For abdominal adipose tissue, volume analysis was performed on axial CT images at the level of the umbilicus, with a threshold of −250 and −50 HU. Visceral abdominal fat was defined as any intra-abdominal adipose tissue confined to within the parietal peritoneum or the transversalis fascia. Subcutaneous abdominal fat volume was assessed by subtracting the visceral abdominal fat volume from the entire fat volume at that level (16,20). All fat volumes are reported in cm3. To evaluate inter-reader reproducibility, thoracic and abdominal fat volumes were repeatedly measured in 48 randomly selected subjects by two independent readers. The inter-reader concordance correlation coefficients for pericardial, intrathoracic, visceral abdominal, and subcutaneous abdominal fat volumes were 0.91, 0.87, 0.77, and 0.78 respectively. 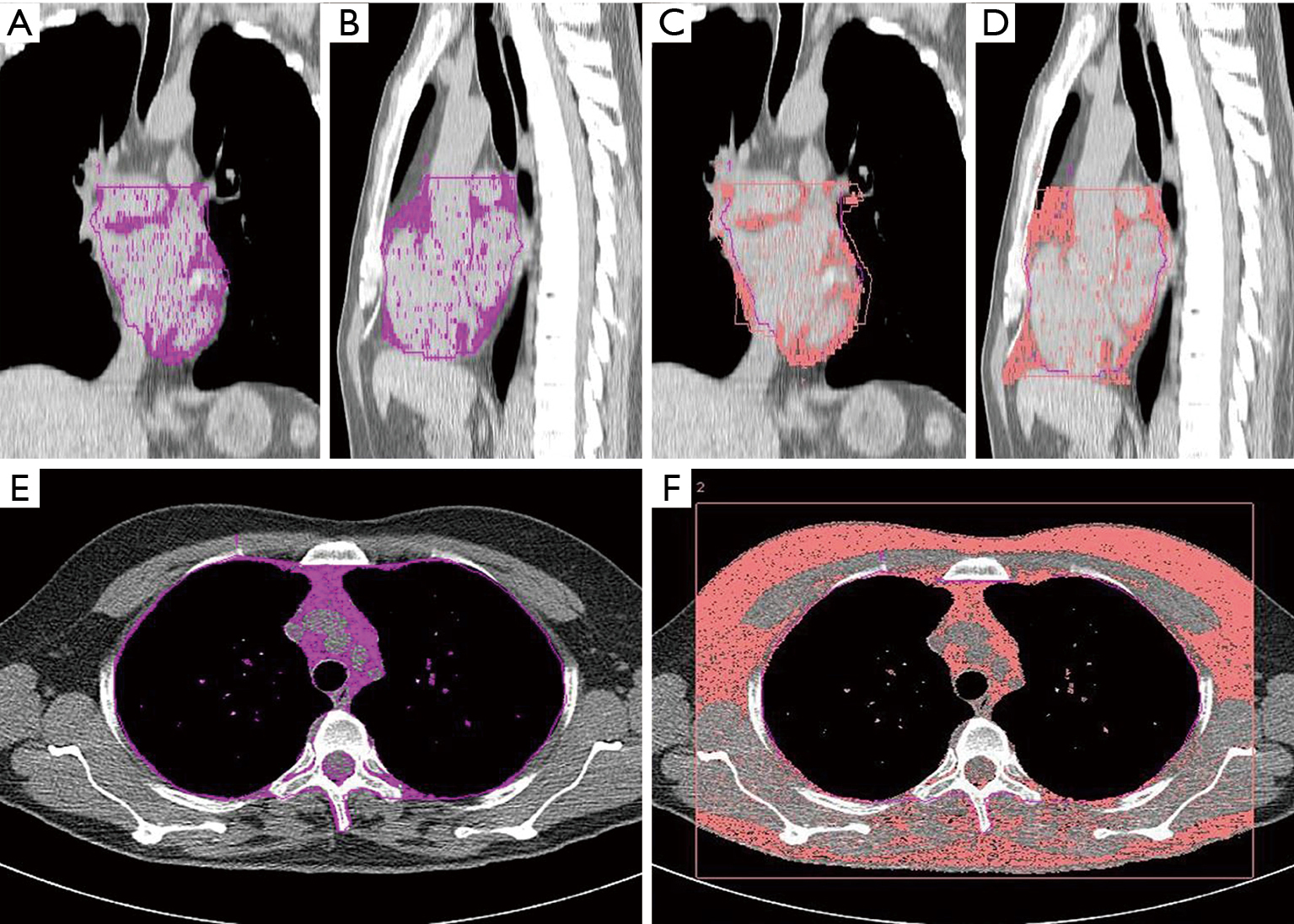 Spirometry was performed by experienced technicians using a spirometer (Vmax 2130, Sensormedics, Yorba Linda, CA, USA) in the standing position, in accordance with American Thoracic Society recommendations (21). Forced vital capacity (FVC) and forced expiratory volume in 1 s (FEV1) were assessed in absolute values (L) and the FEV1/FVC ratio was measured in percentages. Predicted spirometry values (%) were calculated using a formula based on the Korean population (22).

All continuous and categorical variables were compared using the Student’s t-test or Mann-Whitney U test, and the chi-squared test, respectively. Associations among thoracic fat volumes, abdominal fat volumes, and traditional obesity indices were assessed using Pearson’s correlation analysis. The associations between lung functions and fat volumes were examined using multiple linear regression analyses as well as the associations between lung functions and log-transformed fat volumes in subgroup analyses according to sex. Pack-years of smoking, high-density lipoprotein (HDL), and high sensitivity C-reactive protein (hsCRP) were adjusted for FEV1% predicted and FVC% predicted. Also, age, height, pack-years of smoking, HDL, and hsCRP were used as adjusted variables for the FEV1/FVC ratio. For estimating the heterogeneity by sex, interaction effects in a generalized linear model were used. The inter-reader reproducibility was evaluated using intra-class correlation coefficients; P<0.05 was statistically significant. All statistical analyses were performed using SPSS version 23.0 for Windows (IBM Corporation, Armonk, NY, USA). 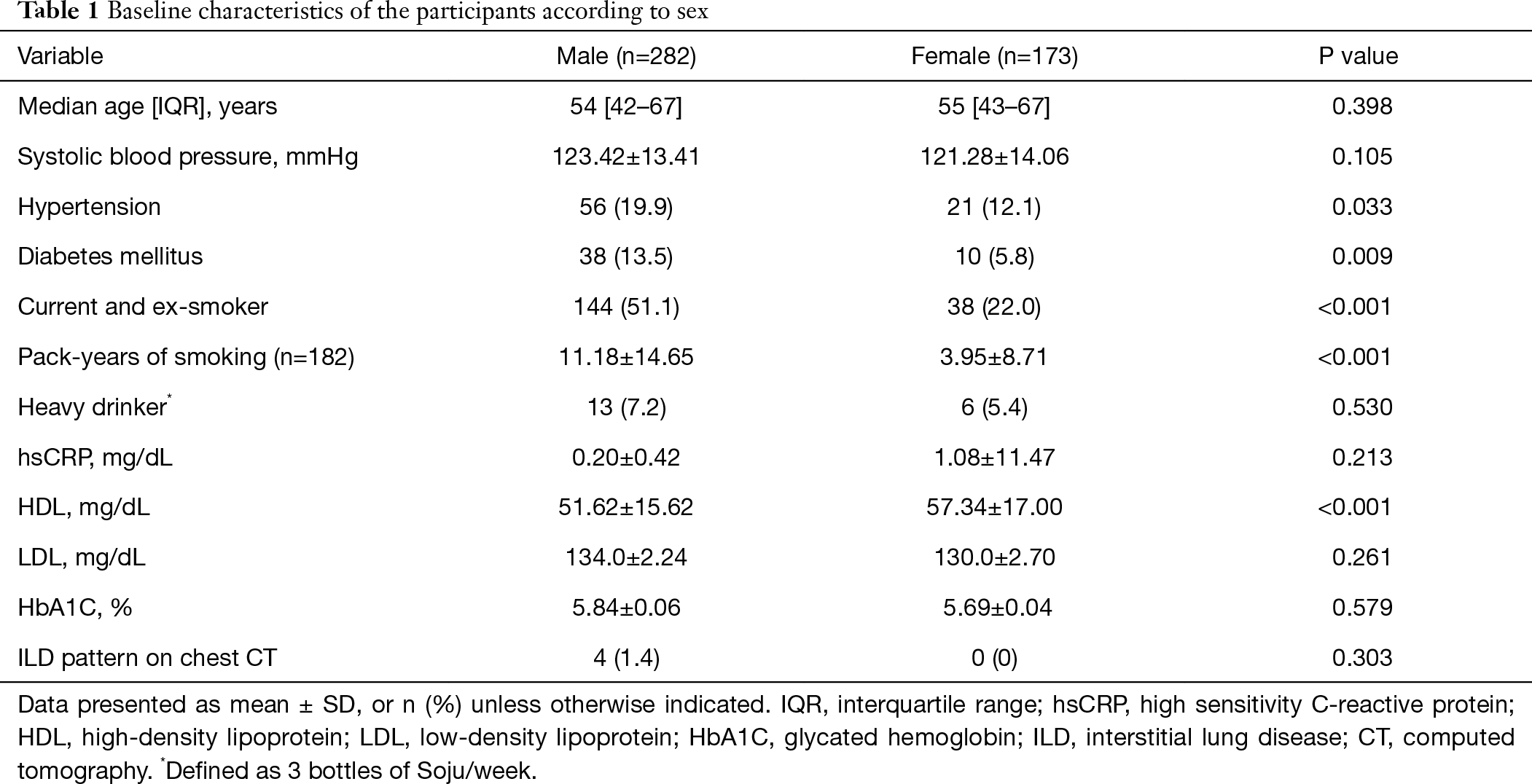 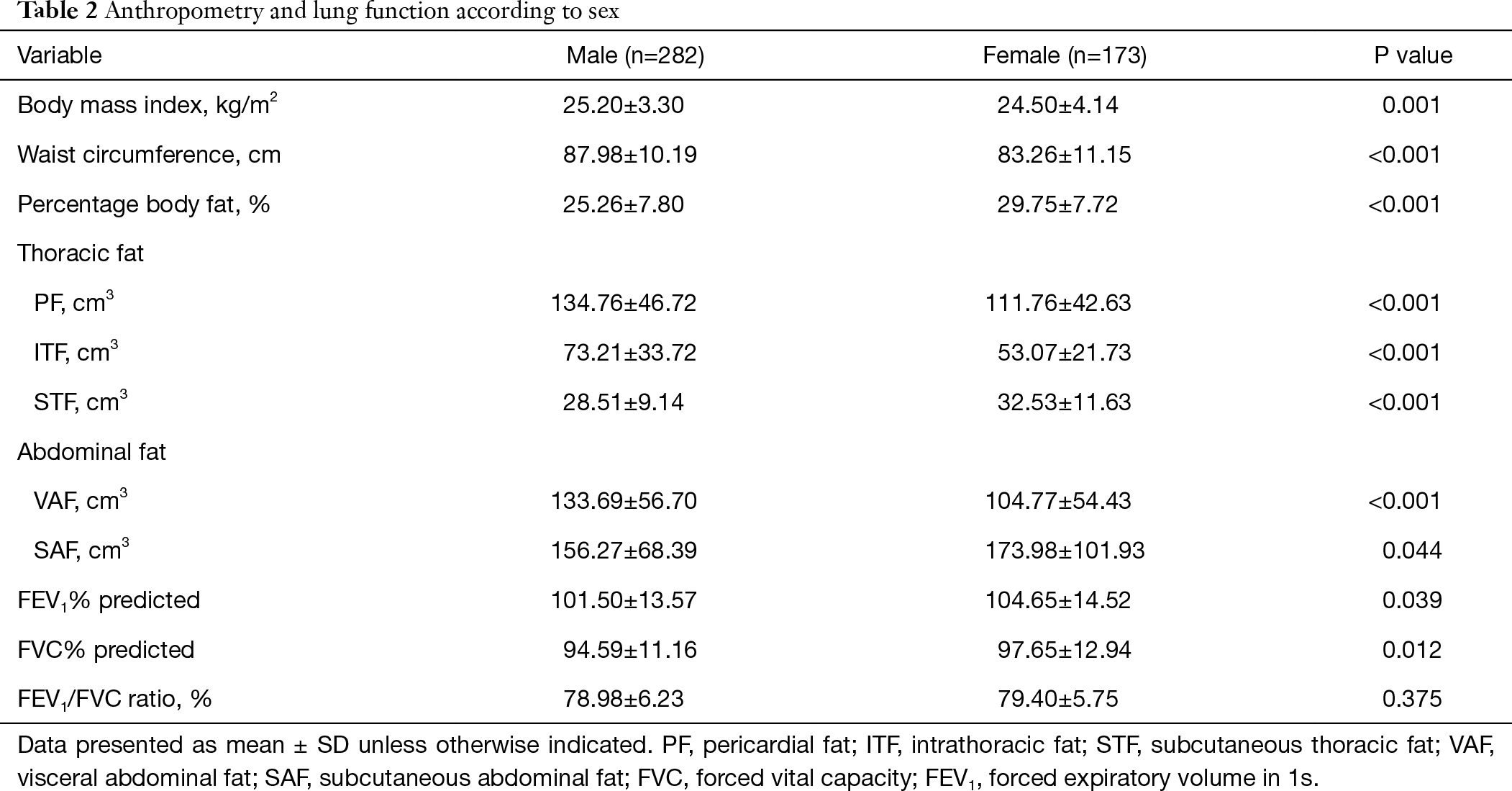 Table 2 Anthropometry and lung function according to sex
Full table 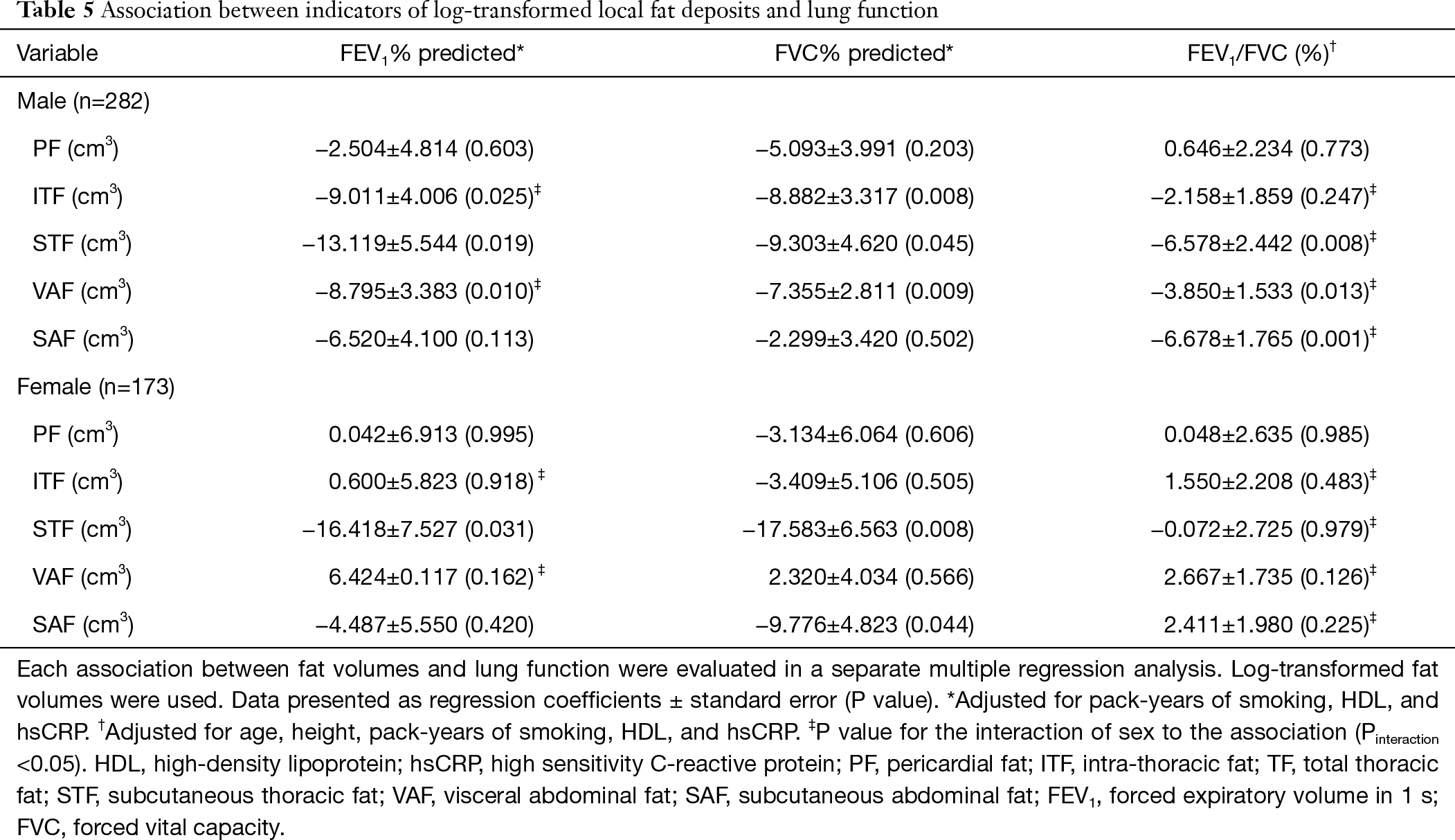 Multiple regression coefficients for the relationship between traditional adiposity indicators such as BMI, waist circumference and body fat percentage, and lung function according to sex were summarized in Table 6. In males, body fat percentage demonstrated negative associations with FEV1% predicted and FEV1/FVC ratio (P=0.008, and P=0.001, respectively). In females, BMI and waist circumference were inversely associated with FVC% predicted (P=0.006, and P=0.024, respectively). Among these associations, only the relationship between body fat percentage and FEV1/FVC ratio showed statistically significant interaction by the sex factor (P for interaction =0.030).

In this study, the volumes of visceral fat, including pericardial fat, intrathoracic fat, and visceral abdominal fat were higher in males than in females, while subcutaneous fat in the thoracic and abdomen were higher in females than in males. In males, intrathoracic fat and visceral abdominal fat volumes were inversely related to FEV1% predicted, and subcutaneous thoracic fat volumes showed a negative correlation with both FEV1% and FVC% predicted. In females, the subcutaneous thoracic fat volumes were associated with decreased both FEV1% and FVC% predicted. In analyses according to fat distribution, associations that showed statistically significant interaction by sex in the interaction tests supported that the association is different between males and females.

It has been established that traditional adiposity indices, including BMI, waist circumference, and body fat percentage, are significantly related to lung function (32,33). However, in the present study, only the association between body fat percentage and FEV1/FVC ratio differed according to sex. Neither body fat percentage nor BMI alone is reliable measurements to identify specific risk factors for the pathogenesis of diseases and can fully reflect the characteristics of body fat distribution. Compared with the traditional uses of body fat percentage, BMI or waist circumference, these direct measurements of fat volumes using CT or magnetic resonance imaging could provide more relevant information for understanding the pathophysiology of pulmonary according to sex, especially in males, and help show the correlation between lung diseases and other cardiovascular and metabolic diseases.

This study had some limitations. First, we used pulmonary function test data acquired from subjects who underwent a previously planned health-screening program. The data did not include total lung capacity, residual volume, and diffusing capacity of the lungs, as well as lung function after bronchodilator intake. The absence of these additional data made it challenging to determine lung function accurately. However, this study may represent a population without respiratory diseases that have normal or nearly normal lung function. Second, there was no consensus on a specific protocol for the measurement of subcutaneous thoracic fat. Therefore, we selected the boundary of measurements using the scapular bone as a reference point similar to those measured in another study (18). Finally, although significant effort into maintaining a standard body position for CT scanning was attempted, some variations could have influenced the accuracy of the measurements.

Including all types of thoracic fat, these findings suggest that the volumes of local thoracic fat deposits were inversely associated with lung function. In addition, while subcutaneous thoracic fat volumes demonstrated the same effects in both sexes, there were sex-related differences as predictors of lung function that suggest the important roles of intrathoracic fat and visceral abdominal fat volumes in males. Future investigations involving larger cohorts and longitudinal studies are needed to evaluate the exact cause-and-effect relationship between local adiposity and lung function impairment. This study may implicate further studies examining the association between local fat deposits and impaired lung function diseases such as chronic obstructive pulmonary disease, asthma, and interstitial lung disease, in which the effects of fat on lung function would be more significant.

Ethical Statement: The authors are accountable for all aspects of the work in ensuring that questions related to the accuracy or integrity of any part of the work are appropriately investigated and resolved. This study was approved by the Institutional Review Board of Dongguk University Ilsan Hospital (2016-146).