End-stage lung diseases continue to be fatal disorders (1,2), for which there is no optimal treatment other than lung transplantation. Although lung transplantation would be definitively effective for patients with end-stage lung diseases, this treatment has many challenges such as a high number of complications, shortage of donors, and the requirement for administration of immunosuppressants for the remainder of patients’ lives (3-5). To overcome these problematic issues, lung regeneration from recipient-derived cells is needed (6). Recently, engineering of bioartificial lung scaffolds constructed by decellularization has been demonstrated as a promising procedure to realize lung regeneration, as they may potentially provide long-term graft survival without the use of immunosuppressive treatments (7,8).

Various approaches have been developed to produce decellularized lung scaffolds, such as physical, enzymatic, and chemical approaches. Among these methods, chemical approaches have recently turned out to be the most cost effective. Triton X-100, sodium dodecyl sulfate (SDS), and 3-[(3-cholamidopropyl)dimethylammonio]-1-propanesulfonate (CHAPS) are three candidate detergents (6). With regard to the effectiveness of removing cellular components, a combined method involving both SDS and Triton X-100 (hereafter referred to as the SDS/Triton X method) has been demonstrated as one of the most effective approaches (9,10).

Although the SDS/Triton X method provides efficient decellularization, DNA content of decellularized grafts was only reduced to about 10–20% of normal lung grafts in large animals (10-12). To generate acellular lung grafts from large animals, cellular components must be eliminated as much as possible. Ideally, the DNA content of decellularized grafts should be approximately 0% of normal grafts. In this regard, one report suggested that instillation of water into the trachea before applying a detergent-based method might efficiently facilitate decellularization because it can remove trapped air from the lungs (12). Thus, this method should be effective in terms of reducing cellular components, as it will allow detergents to more easily spread into the peripheral parts of lungs without the presence of trapped air. However, no previous study investigated the effectiveness of instillation of water directly into a bronchus before a conventional detergent method. As such, we investigated the efficacy of water instillation into a bronchus before application a detergent method for decellularization of lung grafts.

Porcine surgeries and subsequent experiments were approved by the Institutional Animal Care and Use Committee (P17-093) of the University of Tokyo. Institutional guidelines for the care and use of laboratory animals have been observed.

Pigs obtained by mating Yorkshire pigs with Landrace pigs (each weighing 15–25 kg) served as donors of lung grafts. Native lung grafts (N=9) were harvested after intravenous administration of 400 U/kg heparin. Among nine grafts, six left lungs were used for decellularization, while the other three right lungs were used as normal controls. 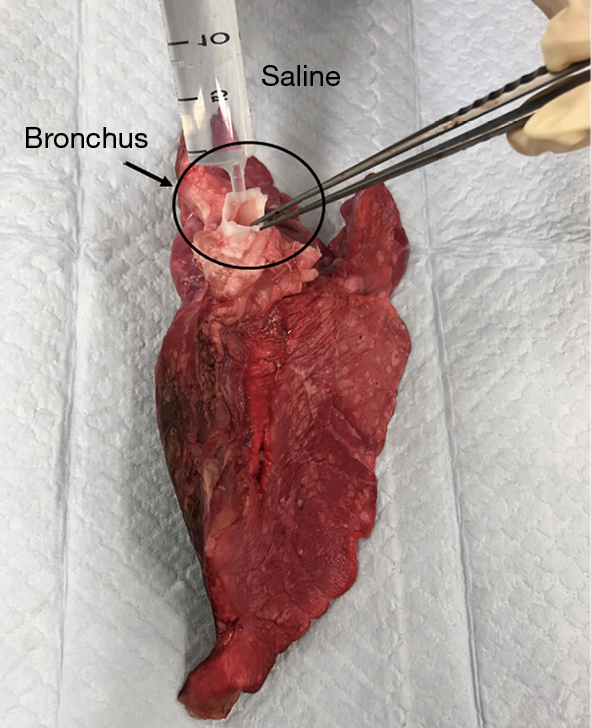 Figure 1 Pretreatment with normal saline injection into a bronchus. A total of 2 L of normal saline was instilled into the bronchus before decellularization.

Three left grafts were pre-treated with 2 L of normal saline flush injected into a bronchus before performing the SDS/Triton X method (PreTx+; N=3). Another three left grafts were subjected to the SDS/Triton X method without saline pre-treatment (PreTx−; N=3). The remaining three right lung grafts did not undergo decellularization and were treated as normal grafts (Normal; N=3).

Samples of tissues were fixed in paraformaldehyde, embedded in paraffin, and 5-µm sections were created. Hematoxylin and eosin staining was performed according to standard protocols.

For immunofluorescence staining, deparaffinized sections were initially subjected to antigen retrieval in citrate buffer (pH6, Sigma-Aldrich, St. Louis, MO) at 120 °C for 20 min. After antigen retrieval, sections were permeabilized with 0.1% Triton X-100 in PBS, washed with PBS, and blocked with 1% bovine serum albumin in PBS. Sections were incubated with primary antibodies overnight at 4 °C. The following day, sections were washed in PBS and incubated with an Alexa-conjugated secondary antibody for 30 min. After staining, tissue slides underwent mounting with 4',6-diamigino-2-phenylidole (DAPI)-containing mounting media (Invitrogen, Carlsbad, CA). Primary and secondary antibodies are summarized in Table 1.

Tissue samples were digested in buffer containing 270 mM NaCl, 1% SDS, 27 mM Tris-Cl (pH 8.0), and 27 mM ethylenediaminetetraacetic acid (EDTA, pH 8.0) with proteinase K (10 µg/mL, Sigma-Aldrich) and RNAse A (10 µg/mL, Sigma-Aldrich) for 1 hr at 45 °C with gentle rotation. DNA was concentrated from the digest by phenol-chloroform extraction and ethanol precipitation. Quantity and purity of DNA were assessed based on absorbances at 260 and 280 nm.

Values are expressed as mean ± standard deviation. Statistical analysis was performed using Student’s t test. A P value <0.05 was defined as statistically significant for all tests.

Hematoxylin and eosin staining revealed an obvious scarcity of cells in PreTx+ and PreTx− groups compared with the abundance of cells observed in the normal group (Figure 2). In addition, to confirm the preservation of extracellular matrix (ECM) proteins, we conducted immunofluorescence staining of laminin, fibronectin, and collagen I. Histological evaluation with immunofluorescence staining revealed no remaining nuclei in decellularized scaffolds (Figure 3). However, collagen I, laminin, and fibronectin were well preserved in decellularized lung scaffolds, regardless of pretreatment (Figure 3). 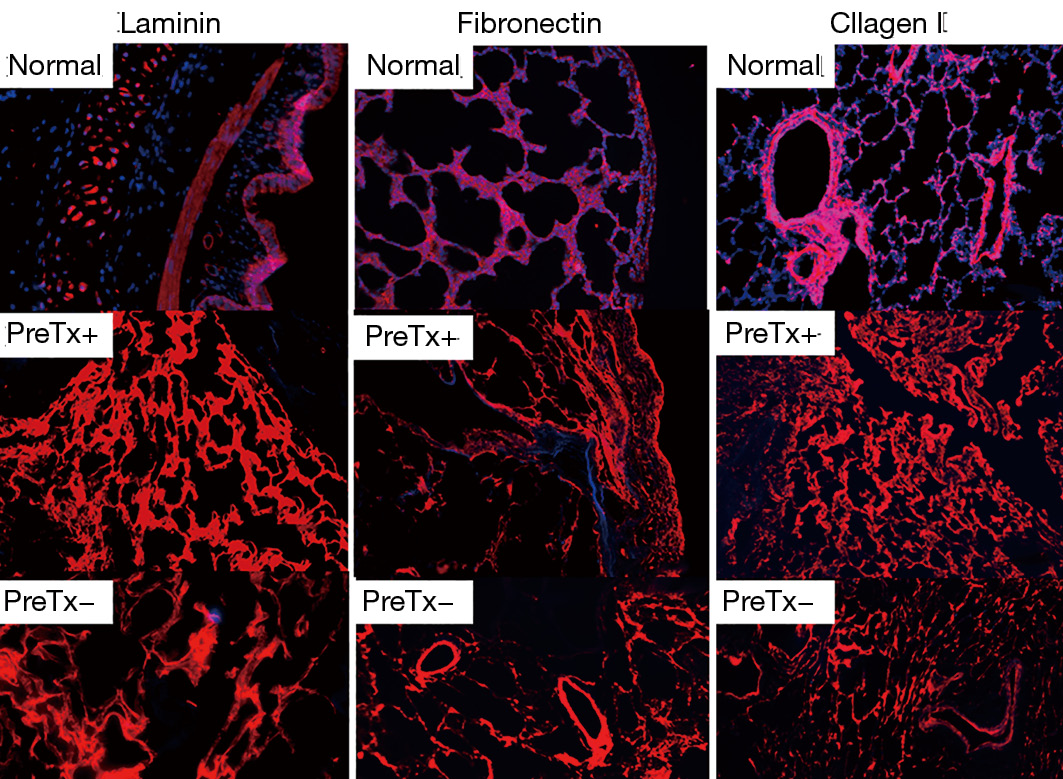 Figure 3 Immunofluorescence staining of grafts from each group. Tissues from the normal group exhibited abundant nuclei (blue) and ECM proteins (red), whereas tissues from both PreTx+ and PreTx− groups demonstrated an absence of nuclei, but preserved ECM proteins (red). Original magnification ×100. 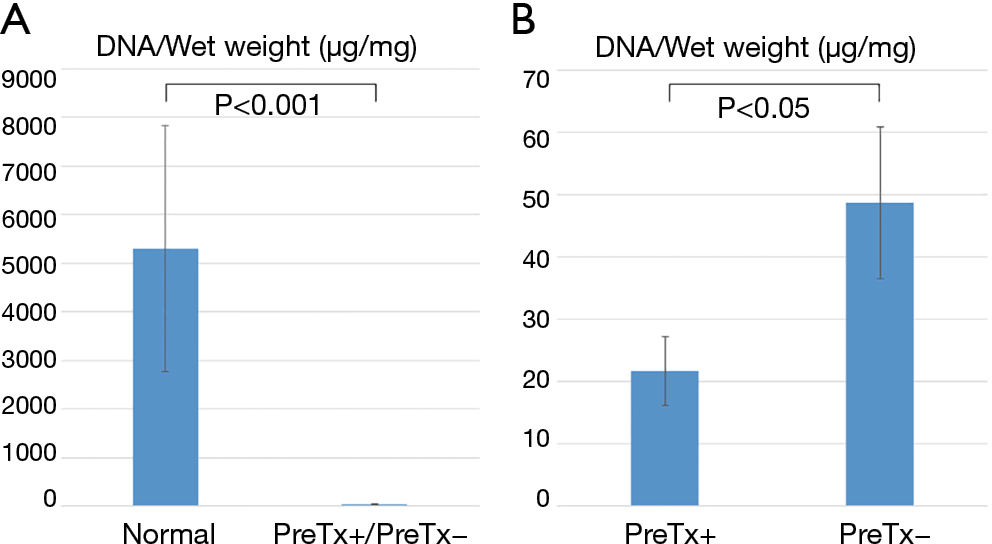 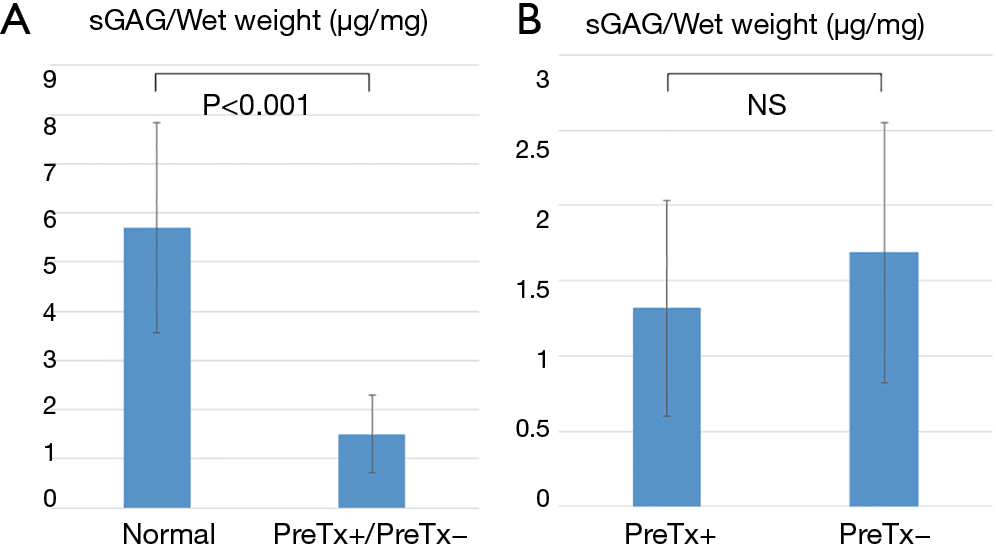 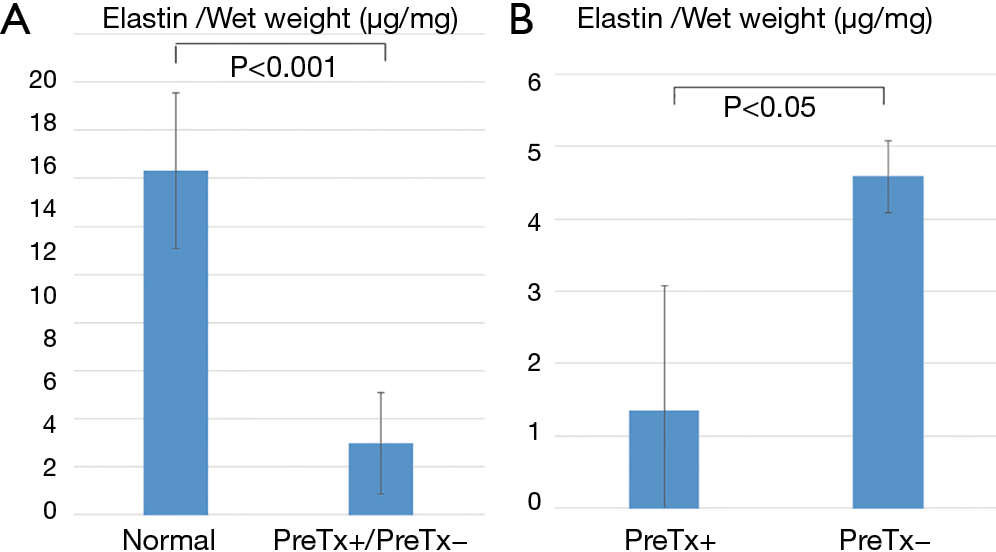 Quantification of DNA contents among PreTx+ and PreTx− groups, as shown in Figure 4, suggested that pretreatment lead to more efficient decellularization. This result was predicted based on the hypothesis that pretreatment with saline injection could remove trapped air in peripheral parts of lung grafts, thereby allowing detergents such as SDS and Triton X-100 to easily permeate grafts and achieve widespread distribution. Peripheral permeation of detergents should radically improve the removal of cells and, indeed, our results support this hypothesis. Thus, in terms of cell removal, this pretreatment method would be useful for decellularization of lung grafts.

However, our results also revealed that saline pretreatment could lead to a significant reduction of elastin, as shown in Figure 6B. This is unfavorable, as elastin is a crucial extracellular matrix (ECM) protein that provide lungs with elasticity, resilience, and deformability (13). Degradation of elastin fibers is considered one of the major factors for development of emphysema (14), as elastin is essentially required for breathing. Thus, decellularized lung scaffolds with preserved elastin are ideal. From this point of view, pretreatment with saline injection into the bronchus would not be favorable.

The mechanism of saline pretreatment on reduction of elastin still remained unknown. One recent interesting report may provide us a clue to understand this phenomenon (15). The report suggested that lung edema could lead to disorganization of ECM proteins (15). In our pretreatment method, we injected 2 L of normal saline into a bronchus of a graft just after the harvest. Thus, we might have created the graft edema by means of normal saline injection, which finally caused reduction of elastin.

With regard to the reduction of elastin content, the SDS/Triton X method also significantly decreased elastin contents of grafts, as shown in Figure 6A. This result was consistent with previous reports (10). Efficacy of the SDS/Triton X method has not only been characterized by reduced DNA content, but also reduced elastin and sGAG (10,16). Although we acknowledge that the SDS/Triton X method could preserve some ECM proteins as shown in Figure 3, this method may not generate acellular lung scaffolds with well-preserved ECM proteins, as it led to a significant reduction of elastin. Thus, we must continue to search for methods to create decellularized lung scaffolds that preserve as much elastin as possible.

To overcome this disadvantage of CHAPS-based decellularization, pretreatment with saline injection into a bronchus could be of great value. Indeed, pretreatment with saline injection should complement the CHAPS-based method to facilitate more efficient cell removal, thus potentially producing more optimal decellularized lung scaffolds. Moreover, such a pretreatment could serve as a strong aid to reduce cell components in combination with other promising methods to preserve ECM proteins.

The authors thank the staff of the Bioscience Research Building at the University of Tokyo for assistance with animal surgeries, as well as Edanz Group (www.edanzediting.com/ac) for editing a draft of this manuscript.

Ethical Statement: The authors are accountable for all aspects of the work in ensuring that questions related to the accuracy or integrity of any part of the work are appropriately investigated and resolved. The study was approved by the Institutional Animal Care and Use Committee (P17-093) of the University of Tokyo.