In 2015, the International Association for the Study of Lung cancer (IASLC) proposed the 8th edition of the tumor, node, and metastasis (TNM) classification of lung cancer, and the new staging system enacted in January 2017 (1). The new staging system contained modifications in stage groupings, but stage IB non-small cell lung cancer (NSCLC) had not been changed. According to the previous edition of the TNM staging system, only T2aN0M0 was considered stage IB disease. Stage IB of the 8th edition TNM classification also only includes T2aN0M0 (2,3). However, some criteria for T classifications were changed (1,4,5). First, the measurement of tumor size was changed. Previously, the tumor size was determined by the maximum size of the tumor including lepidic component. On the other hand, the T stage in the 8th edition is determined according to the maximum size of the invasive component, without the lepidic component. Second, the T2a category also changed. In the 7th edition, T2a was considered to be a tumor size ranging from 3 to 5 cm; whereas in the 8th edition, the T2a descriptor was changed to a size of the invasive component ranging from 3 to 4 cm. Therefore stage migration also occurred for stage IB NSCLC after adoption of the 8th edition of TNM staging system.

According to the National Comprehensive Cancer Network (NCCN) guidelines for NSCLC (Version 3.2019), adjuvant treatment after surgery may be considered for patients with several risk factors. In the NCCN guidelines, risk factors include poorly differentiated tumors, lymphovascular invasion, wedge resection, tumors >4 cm, visceral pleural invasion, and unknown lymph node status. These risk factors have been reported by several studies to be prognostic factors in patients with early-stage lung cancer (6-9). However, a re-evaluation on whether or not the prognostic factors for stage IB NSCLC remain the same for the new staging system is needed. In fact, no study has evaluated the prognostic factors of stage IB disease as classified by the new 8th edition of the TNM staging system. In addition, since stage classifications have changed, the efficacy of adjuvant chemotherapy for stage IB NSCLC also must be re-evaluated.

From 2005 to 2016, 1,598 consecutive patients at a tertiary hospital in South Korea were diagnosed with NSCLC and underwent curative surgery. Of this population, 262 patients were diagnosed with 8th edition stage IB NSCLC. Finally, 211 patients satisfied the following study criteria: (I) anatomical lobectomy or bilobectomy; (II) complete resection with clear resection margins; (III) no neoadjuvant treatment. The clinicopathological characteristics of all study patients were analyzed. We compared the clinicopathological characteristics and survival between the patients undergoing surgery only versus those who also received adjuvant chemotherapy. The risk factors for recurrence and cancer-related death were analyzed.

Histological evaluation and restaging to the 8th-edition staging system

All clinical specimens and pathology reports were reviewed. Pathology report included tumor size, tumor location, nodal status, and pleural or lymphovascular invasion. Visceral pleural invasion was defined as tumor extending beyond the elastic layer. Lymphovascular invasion was defined as tumor cells present in lymphatic or vascular lumina. TNM staging was based on the 8th edition of the TNM staging system of lung cancer (2). To reclassify the T category according to the 8th edition, tumor size was remeasured by the pathologist at the greatest diameter of the invasive component on a histopathological preparation (5).

The clinical and pathological characteristics of the surgery-only patients and adjuvant-chemotherapy patients were compared. The Student t-test or Wilcoxon rank-sum test was used for continuous variables, and the χ2 test or Fisher exact test was applied for categorical variables.

The Kaplan-Meier method was used to analyse data collected from the interval between the time of operation and the time of the final follow-up visit. Recurrence-free-survival (RFS) rates and disease-specific-survival (DSS) rates were estimated by the Kaplan-Meier method using data collected from patients with confirmed recurrence and cancer-related death. The Cox proportional hazards model was used in a multivariate analysis to determine the risk factor of recurrence and cancer-related death for all the study patients. The variables with a P value <0.1 by the univariate analysis were entered into a multivariate analysis. A P value <0.05 was considered statistically significant.

Table 1 shows the clinicopathological characteristics of patients with stage IB NSCLC. Lobectomy was performed for 200 patients (94.8%) and bilobectomy was performed for 11 patients (5.2%). Most patients (91.5%) underwent mediastinal lymph node dissection. Systematic nodal dissection was conducted in 134 patients (63.5%) and selective mediastinal node dissection in 59 patients (28.0%). Postoperative complications occurred in 33 patients (15.6%), and 3 patients (1.4%) died after surgery. Adjuvant chemotherapy was administered to 20 patients after surgery. Histopathological analysis revealed a mean total tumor size (including the lepidic component) of 3.0 cm. The mean invasive component size (excluding the lepidic component) was 2.6 cm. The most common histological tumor type was adenocarcinoma (70.1%). Visceral pleural invasion and lymphovascular invasion were present in 137 (64.9%) and 105 (49.8%) patients, respectively. 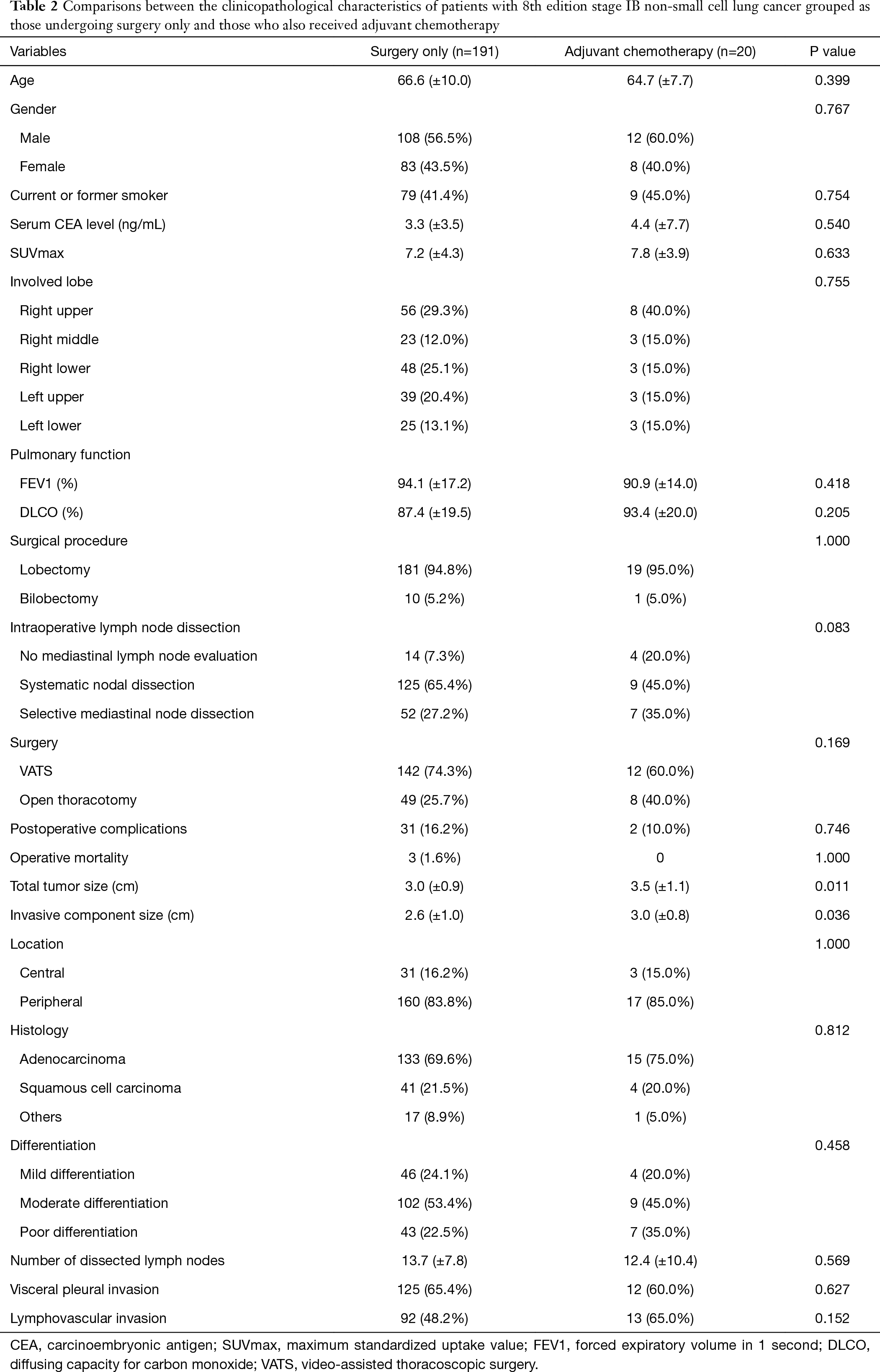 Figure 1 Comparisons between recurrence-free-survival (A) and disease-specific survival (B) of patients with 8th-edition stage IB non-small cell lung cancer grouped as those undergoing surgery only and those who also received adjuvant chemotherapy.

Figure 2 Comparisons between recurrence-free-survival (A) and disease-specific survival (B) of patients with tumors that were with and without lymphovascular invasion.

After implementation of the 8th revision of the TNM classification of NSCLC, the composition of the tumors included in the stage IB classification was changed. Most importantly, the requirement for measuring tumor size was changed. Determination of the T stage in the 8th revision is based only on the maximum dimension of the invasive component and excludes the lepidic component (4,5). The size range of the T2a descriptor was also reduced from 3–5 to 3–4 cm. Therefore, the tumor characteristics for 7th edition stage IB NSCLC were changed in the 8th edition. Because of these changes, we thought that prognostic factors should be re-evaluated for tumors staged IB according to the new staging system.

This study has several limitations. First, it was a retrospective study. Second, we obtained data from a single institution with a relatively small sample size, so generalizing our results is difficult. However, the study patients were treated by a standardized surgical protocol at single institution. Furthermore, a detailed analysis was possible because of detailed data that was stored in the electronic medical records. We also used detailed data from pathological specimens and pathological reports. We believe that our data can be used as the basis for future studies. Since there were only 20 patients undergoing adjuvant chemotherapy, comparing outcomes between the surgery-only and the adjuvant-chemotherapy patients is difficult. However, the main purpose of this study was not to compare the outcomes between patients with and without adjuvant chemotherapy, but to identify prognostic factors in the newly revised stage IB NSCLC. Finally, the follow-up period was relatively short. However, most patients with NSCLC are known to have disease recurrence within a 2-year postoperative period (16), and early recurrence has been shown to be an accurate reflection of long-term outcome (17).

In conclusion, lymphovascular invasion was an independent prognostic factor for patients with stage IB NSCLC after surgical resection. Adjuvant chemotherapy was not an effective treatment for stage IB patients according to the new staging system. Additional studies that include prospective randomized controlled trials might provide more accurate results. Furthermore, the efficacy of adjuvant chemotherapy for stage IB NSCLC with lymphovascular disease should be evaluated.

Ethical Statement: The authors are accountable for all aspects of the work in ensuring that questions related to the accuracy or integrity of any part of the work are appropriately investigated and resolved. This study was approved by the institutional review board of Seoul St. Mary’s Hospital at the Catholic University of Korea and individual consent was waived (Referral number: KC19RESI0158).