Coronary flow-limiting lesions and their relative importances have been considered a primary determinant of survival in patients with coronary artery diseases (CAD) (1-3). Therefore, therapeutic strategy selection and outcome prediction would likely be improved by risk-scores being able to fully account for coronary anatomy variations. However, data in this regard are lacking.

In the Leaman score, the weighting factors of coronary segments are assigned according to the proportionate blood flow directed to left anterior descending artery (LAD), left circumflex (LCX) or right coronary artery (RCA), wherein coronary dominance is simply divided into right or left (4). Thus, the Leaman score is far from reflecting the variability in coronary anatomy. The SYNTAX (SYNergy between PCI with TAXUS™ and Cardiac Surgery) score, based on this Leaman score, therefore has significant limitations to accommodate the variability in the coronary anatomy (5). A case in point is that, according to the SYNTAX score, the weighting factor of RCA is constantly 1.0 in right RCA dominant circulation, regardless of its size. However, its size and distribution vary greatly among individuals. A Coronary Artery Tree description and Lesion EvaluaTion (CatLet) angiographic scoring system has therefore been designed to reflect this variability in the coronary anatomy.

This CatLet score has been developed based on the following rules and classifications:

Definition of the coronary tree segments

The definition of the coronary tree segments is based on the classification proposed by the AHA (10) and further modified for this CatLet angiographic scoring system (Figure 1). 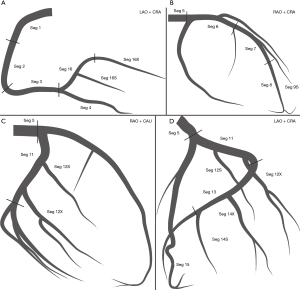 The 17-myocardial segment model is based on the approximately even division of the left ventricle (LV) (7), each segment can thus be understood either as 1 mass unit or 1 actual flow unit given the actual myocardial blood is proportional to muscle mass (11). The importance of a blood vessel (weighting factor) depends on how many segments the blood vessel supplies rather than on the nomenclature of the blood vessel.

Although there is variability in the coronary artery blood supply to the myocardial segments, it is generally considered appropriate to assign individual segments to specific coronary artery territories, which is defined as the benchmark type in this study (12). The assignment of the 17-myocardial segments to one of the 3 major coronary arteries is recommended by AHA Scientific Statement as follows: LAD supplies 7 segments: 1, 2, 7, 8, 13, 14, and 17; LCX supplies 5 segments: 5, 6, 11, 12, and 16; and RCA supplies 5 segments: 3, 4, 9, 10, and 15. Correspondingly, weighting factors are 7.0 for LAD, 5.0 for LCX, and 5.0 for RCA in this benchmark type. Specifically, LAD divides into LADex (excluding diagonals) and diagonals, supplying 4 segments and 3 segments, respectively; RCA divides into PDA and PLVs, supplying 2 segments and 3 segments, respectively. Correspondingly, weighting factors are 3.0 for diagonals, 2.0 for PDA, and 3.0 for PLVs in this benchmark type.

The size of RCA is defined depending on the distribution of the LCX according to the rule of competitive blood supply. The stem LCX (not its branches) usually runs in the left atrio-ventricular sulcus (LAVS). Therefore, the stem LCX’s course on the cineangiograms can be utilized to indicate the LAVS. The crux cordis approximately falls upon the perpendicular line via the aorta ostium of the LCA (aorta wall). The crux cordis is the intersection point of the perpendicular line with the LAVS. In the left anterior oblique (LAO) 40º/cranial 20º view, LAVS runs from the upper right to the lower left, starting at the junction of the first quarter of the leftmost margin of the left heart with an approximately 90˚ angle referring to the left heart margin and terminating at the crux cordis (Figure 2, Figure 2M). 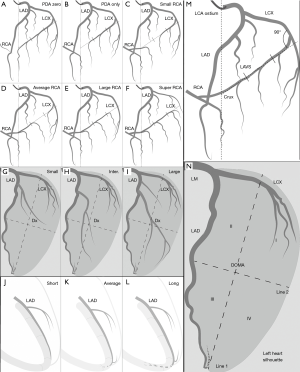 The diagonal-obtuse marginal area (DOMA) of the LV is competitively perfused by both Dx off LAD and OM off LCX. In the LAO 40º/cranial 20º view, the DOMA takes on the approximate shape of a spindle delineated by discernable anatomic markers on coronary angiograms. Before giving rise to obtuse marginal arteries, initial stem LCX courses usually transversely in the LAVS and delineates the upper border of the DOMA. LAD almost constantly courses in the anterior interventricular sulcus and delineates the right boundary of the DOMA. The DOMA’s left and inferior margins are recognizable because of sufficient contrast between the heart margin and its surrounding tissues on cineangiograms. An imaginary line 1 starting from the apex divides the DOMA into 2 similar portions. Another imaginary line 2 perpendicular to the line 1 at its midpoint also divides the DOMA into 2 portions. Thus, we get 4 quadrants counterclockwise over the DOMA: I, II, III, and IV as shown in Figure 2N.

Six types of RCA dominance, 3 types of Dx size, and 3 types of LAD length together result in a total of 54 patterns of coronary artery circulation, which are used to account for the variability in coronary anatomy among individuals.

According to the law of flow conservation (8), a parent vessel equals the sum of its daughter vessels in terms of blood flow. Weighting factor assignment strictly follows this law. Based on the standard 17 segment model of the LV, the weighting factors are derived from the above-described anatomic details of RCA, LAD, LCX or their branches (variations in coronary anatomy). The benchmark pattern of coronary circulation is used as reference and weighting factors with discrete values are added to account for the variations in the circulation pattern. Use of preset, discrete incremental values is a compromise between the convenience of clinical use and the variability in coronary artery circulation. A preset incremental value of 1 or 1.5 was used to describe differences in LAD length, in diagonal size or in RCA supply territory. This approach, in combination with the rule of competitive blood supply and the law of flow conservation (8), allows to derive the weighting factors as shown in Figure 3 for all the coronary artery segments in the 54 patterns of coronary artery circulation. Based on these weighting factors, we developed a new CatLet angiographic scoring system accounting for the variability in the coronary anatomy.

Lesion scoring and the need for adapting modifications

The lesion score was a product of the weighting factor (W) of a blood vessel and its degree of stenosis (9). Separate lesion scores were then added to derive the total score. In this CatLet scoring system, only lesions with ≥50% diameter stenosis on vessels >1.5 mm in diameter were scored while all the non-stenosis adverse characteristics pertinent to the lesions were no longer scored, but only qualitatively recorded.

Within one segment, however, direct scoring will overestimate the severity of coronary artery disease in the presence of side branches preceding the main branch (MB) lesion regardless of their normal or diseased status. We will explain the need for adapting modifications with the scenario 1 as listed below (Figure 4). In this scenario, suppose the weighting factor is 7.0 for the segment and 3.0 for the side branch (SB). The MB of the segment divides into proximal or distal MB referring to the SB. According to the law of flow conservation, the weighting factor for the distal MB is 4.0. Within one segment, an occlusive lesion for this segment distal to the SB is scored as 7.0×5=35.0 according to the CatLet scoring algorithm. Actually, the distal MB lesion’s weighting factor is only 4.0 because of the presence of the SB preceding the occlusion lesion. Hence, the CatLet scoring algorithm overestimates the severity of the occlusive distal MB lesion. The scoring values for this segment should be modified for 7.0×5−3.0×5=20.0 using formula: S = subtotal score − W SBs × 5. All the vessels are required to be modified if appropriate regardless of their sizes. Six scenarios required to be modified according to the corresponding formulas were elaborated online (http://www.catletscore.com). 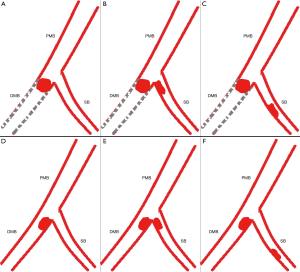 The CatLet score calculation is feasible by use of a computer program consisting of sequential and interactive self-guided questions. The calculator and its elaborate tutorial are available at http://www.catletscore.com. The IE browser is required to run this calculator.

For non-occlusion or ATO lesions, questions 5–11 address the lesion-based evaluation, where we qualitatively record the adverse characteristics as “Yes” or “No” in our scoring system. Question 12–14 addresses treatments, among which the stenting strategy is classified according to the MADS classification recommended by European Bifurcation Club (13). Question 15 addresses scoring modification if necessary. Upon completion of question 15, the algorithm proceeds to the last question or to another cycle of “add another lesion”. The last question of the CatLet score algorithm is to describe the anatomy of the native coronary trees. For a patient with coronary artery disease, it takes around 5−10 minutes to process a patient depending on the complexity and severity of coronary artery disease. Figure 5 showed scoring of a lesion on proximal LAD according to the CatLet score algorithm. 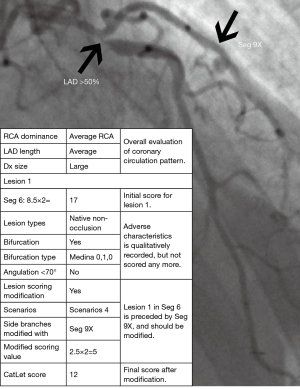 The utility of this CatLet score for predicting outcomes and standardizing the angiographic data collection will be investigated in a series of clinical trials enrolling “all-comers” with CAD.

It will be evaluated for outcome predictions in a historic or prospective cohort of “all-comers” with acute myocardial infarction, unstable angina pectoris, and CTO in a single center or multi-center studies.

The first validation study has been conducted in acute myocardial infarction and registered at http://www.chictr.org.cn (ChiCTR-POC-17013536), which will be published soon.

The most important characteristics of this CatLet angiographic scoring system to be emphasized is that it is focusing on the variability in the coronary anatomy.

Funding: This work was in part supported by the Sci-Tech Development Program of Suzhou City (SYS2019040 to He YM).

Ethical Statement: The authors are accountable for all aspects of the work in ensuring that questions related to the accuracy or integrity of any part of the work are appropriately investigated and resolved. This study complies with the Declaration of Helsinki and has full local approval for using subject data.