Transcatheter aortic valve replacement (TAVR) is a less invasive treatment option for severe symptomatic aortic stenosis, and has emerged as an alternative therapeutic approach to conventional surgical aortic valve replacement for patients deemed to be at high risk of surgical complications (1,2). It has been proposed that the indications of TAVR should be expanded to include patients with intermediate and even low risk of surgical complications (3-5). However, TAVR still frequently results in short-term complications, including cardiac conduction abnormalities and TAVR-related requirement for permanent pacemaker (PPM) implantation (6). Although technological developments in TAVR have facilitated the procedure and reduced the occurrence of some periprocedural complications, the incidence of postprocedural PPM implantation has not changed significantly over time, and has even potentially slightly increased after the introduction of newer generation devices (7).

The present study was performed in accordance with the Preferred Reporting Items for Systematic reviews and Meta-Analyses (PRISMA) guidelines (12).

A literature search of the PubMed and Embase databases was performed to identify all studies published from January 1, 2002 to April 4, 2018 that investigated the impact of postprocedural PPM implantation on clinical outcomes after TAVR. The search start date was set at 2002, as that was the year when TAVR was first performed in humans. The search terms were: (TAVR OR TAVI OR percutaneous aortic valve replacement OR percutaneous aortic valve implantation) AND (pacemaker implantation OR PPM implantation OR pacing OR cardiac conduction abnormalities). The publication language was restricted to English.

The titles and abstracts of all retrieved articles were independently reviewed by two researchers (ZW Xi, W Liu) to identify potentially relevant studies. The full texts of all potentially relevant articles were then reviewed in detail to assess their appropriateness for inclusion in the present study. Studies fulfilling the following criteria were included: (I) data reported on long-term clinical outcomes after TAVR (follow-up ≥6 months); (II) sufficient data available on postprocedural PPM implantation following TAVR. Studies were excluded if any of the following criteria applied: (I) PPM was implanted >30 days after TAVR; (II) abstracts, case reports, conference presentations, or editorials; (III) outcomes of interest were not clearly reported or were impossible to extract or calculate from the published results. If more than one study was published by the same authors using the same case series or overlapping case series, the study with the largest sample size was included, except when different subgroup analysis could be done. Any disagreement between the two researchers was reviewed by a third researcher (XH Chen) and resolved by consensus.

Data on clinical outcomes and the characteristics of each study were extracted using a prepared standardized extraction form. The relevant information regarding the following items were extracted by two main researchers (ZW Xi, W Liu) from each included study if available: first author’s name, publication year, study period, region, study design, single or multicenter study, number of TAVR cases, patient age, proportion of males, logistic European System for Cardiac Operative Risk Evaluation, Society of Thoracic Surgeons score, valve type, follow-up duration, incidence of PPM implantation, and primary and secondary endpoints. The quality of cohort studies was evaluated using the Newcastle-Ottawa scale for prespecified items that comprised patient selection (representativeness and selection of patients, ascertainment of exposure), comparability of cohorts on the basis of design or analysis, and outcome (assessment of outcomes, adequacy of follow-up) (13). A quality score [0–9] was generated in accordance with a maximum score of 1 for each item.

The primary endpoint was long-term (at least 10 months postoperatively) all-cause death. The secondary endpoints were cardiovascular death, heart failure, and a composite of stroke and myocardial infarction (MI). If endpoints were reported at more than one follow-up timepoint, we used data from the longest follow-up in each study.

Crude risk ratio (RR) was the principal summary measure. RRs were retrieved or directly calculated with the corresponding 95% confidence interval (CI) for each endpoint as the result of primary analysis. Heterogeneity, which was anticipated to be significant, was assessed by the Q-statistic and Higgins’ and Thompson’s I2 test. Significant heterogeneity was considered to be present when P<0.10 or I2>50%. When there was no significant heterogeneity, the fixed-effects model (Mantel-Haenszel) was selected for the calculation of RRs, otherwise the random-effects model was selected. Sensitivity analysis was performed by deleting one study at a time and calculating the odds ratio for the remaining studies. To assess the potential effect of publication bias, we inspected funnel plots for asymmetry and used the Egger’s regression asymmetry test in which P<0.10 was considered to indicate significant publication bias. Descriptive characteristics were presented as the mean ± standard deviation or the median (interquartile range) for continuous variables, and as percentages or frequencies for categorical variables. Data analyses were performed using the statistical package STATA V14.0 (StataCorp, College Station, Texas, USA) and Review Manager V5.3 (The Nordic Cochrane Centre, The Cochrane Collaboration, London, UK).

The literature search identified 703 articles from the PubMed database, and 272 from the Embase database; after the exclusion of duplicates, the titles and abstracts of 845 articles were reviewed. Of those, the full texts of 28 studies were assessed for eligibility. Four studies were excluded due to the use of the same data source or overlapping data with other studies. Two studies reporting different outcomes based on the presence of new-onset left BBB after TAVR were excluded due to the absence of data on PPM implantation. Another two studies were excluded due to a follow-up duration of <6 months. A final total of 20 studies with a total of 21,666 patients undergoing TAVR were included for the assessment of the primary endpoint; of those, seven studies were eligible for assessment of the endpoint of cardiovascular death after PPM implantation, while three studies with 12,063 patients were eligible for assessment of the endpoint of stroke and MI. The follow-up duration ranged from 8 to 48 months. None of the included studies were randomized. The overall quality of the included studies was good. Figure 1 shows the PRISMA flow diagram, and Table 1 shows the baseline characteristics of included studies (8,10,14-31). 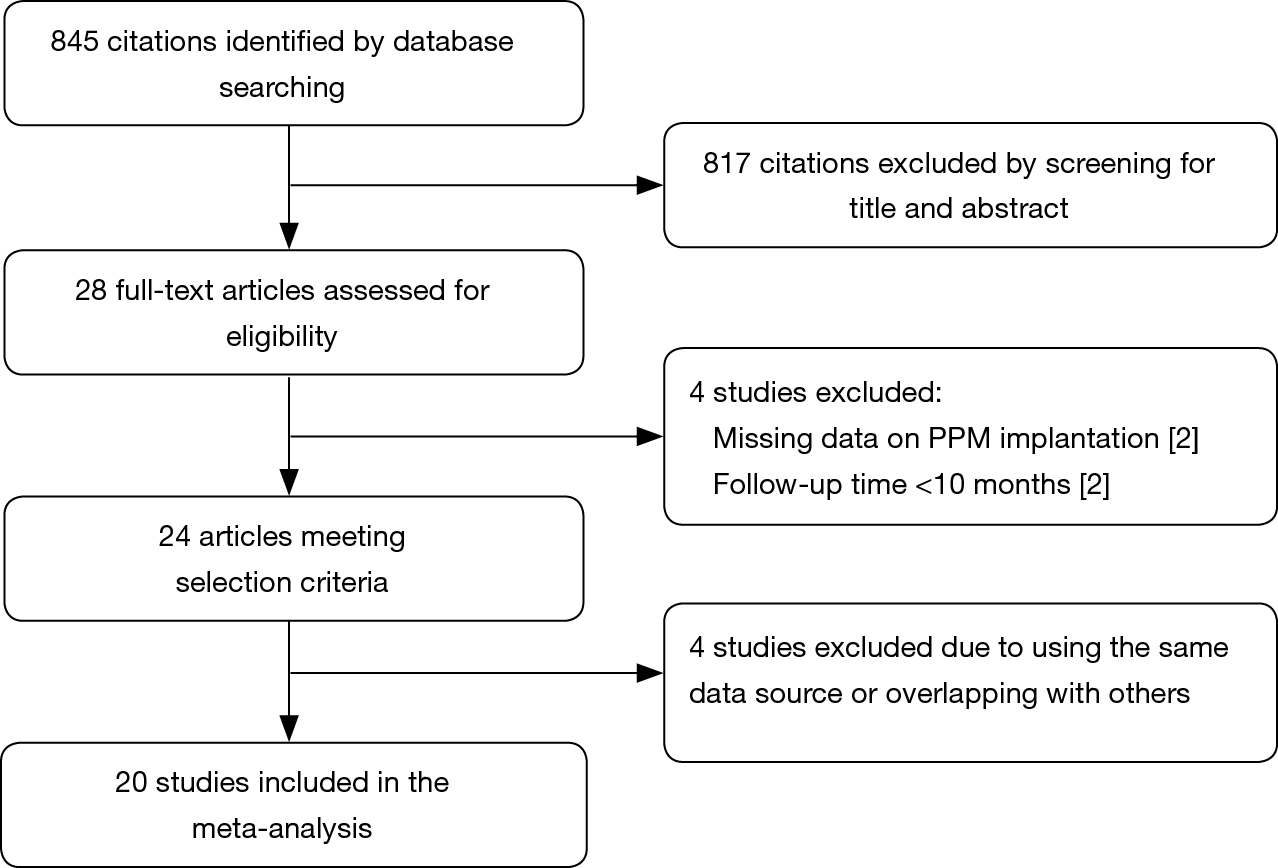 Figure 1 Flow diagram of selected studies based on the Preferred Reported Items for Systematic Reviews and Meta-Analysis (PRISMA) statement. 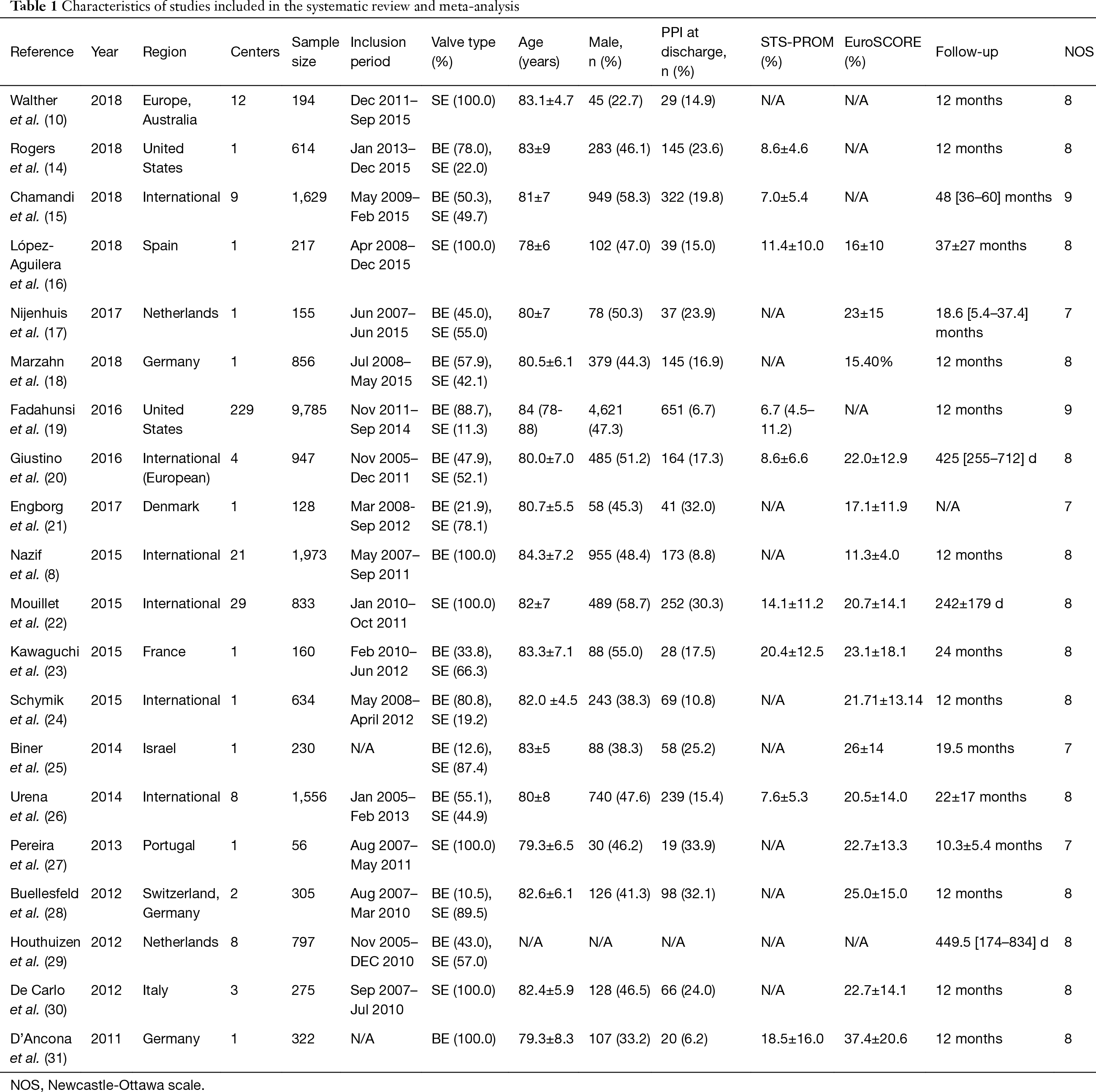 Impact of permanent pacemaker implantation on the primary endpoint

Possible publication bias was suggested by visual analysis of asymmetric funnel plots for the primary analysis. However, this publication bias was not confirmed by Egger’s test (P=0.30). We also performed a correction for publication bias using the trim-and-fill method; the addition of six missing studies reduced the RR to 1.15 (95% CI, 1.07–1.22) in the fixed-effects model and 1.20 (95% CI, 1.03–1.38) in the random-effects model. Sensitivity analysis for the risk of all-cause death indicated that none of the studies significantly affected the results of this meta-analysis.

Impact of permanent pacemaker implantation on the secondary endpoints

Three studies provided sufficient data on the occurrence of stroke and MI during follow-up. Patients implanted with a PPM after TAVR tended to have a decreased incidence of stroke and MI compared with those without a PPM (RR, 0.85; 95% CI, 0.64–1.13; P=0.27) (Figure S3), but this difference did not reach statistical significance; this lack of significance may be due to the limited number of included studies.

The present meta-analysis of the data from 21,666 patients included in 20 studies showed that PPM implantation following TAVR was associated with increased all-cause mortality and a tendency toward a decreased incidence of stroke and MI, but the risk of cardiovascular death did not significantly differ between patients with or without PPM implantation.

The impact of new PPM implantation after TAVR on the long-term outcomes has been controversial in recent years. It has been proved that the need for a paced rhythm would increase the risk of late mortality and heart failure by previous evidence while the impact of paced rhythm after was still unclear (40,41). The present meta-analysis found an association between PPM implantation following TAVR and an increased risk of all-cause death, but failed to show an increased risk of cardiovascular death in patients receiving new PPM implantation. Similarly, the subgroup study from the Society of Thoracic Surgeons Transcatheter Valve Therapy registry, which was included in our meta-analysis and had the largest sample size of all the included studies, found an increase in late mortality, but not cardiovascular mortality, in patients requiring PPM implantation after TAVR (19). This previous study also demonstrated that early PPM implantation was associated with longer median hospital stay and intensive care unit stay (19). A smaller study of 1,973 patients from the Placement of Aortic Transcatheter Valves (PARTNER) trial noted a tendency toward increased 1-year mortality in patients with new PPM implantation, although this difference did not reach statistical significance (8). These findings were in agreeance with another study in which the patients all underwent TAVR with a self-expandable prosthesis (22).

The present meta-analysis was based on 20 non-randomized studies, and had some limitations. First, there was heterogeneity between included studies, as our meta-analysis included large multicenter registries and also single-center studies with relatively small samples. The heterogeneity among studies was also increased by the variations in endpoint definitions and inclusion criteria. Second, our meta-analysis aimed to investigate the impact of PPM implantation on long-term clinical outcomes; however, the follow-up period varied hugely among the included studies. Some included studies only followed up patients for 10 months, while others followed up patients for more than 4 years. Third, we did not exclude studies with a small sample size (<200). Fourth, this was a study-level meta-analysis. An analysis of individual patient data may provide further insights.

We thank Kelly Zammit, BVSc, from Liwen Bianji, Edanz Editing China (www.liwenbianji.cn/ac), for editing the English text of a draft of this manuscript.