Acute kidney injury (AKI) is a common complication which is reported frequently among 30% of post-cardiac surgeries in adults (1,2), and is associated with higher risk of mortality and poor long-term adverse events (3-7). Even though severe kidney injury is reported in many cases before the elevation of serum creatinine levels, clinicians mainly rely on serum creatinine levels as the functional biomarker for assessing clinical diagnosis and staging of AKI (8). Earlier detection of severe AKI would afford clinicians an earlier time window to intervene proper therapeutic management in patients undergoing cardiac surgery.

The human alpha 1-antitrypsin (A1AT) is an acute phase glycoprotein with broad immunoregulatory and anti-inflammatory property, which showed a higher binding efficiency with hemin that prevents the formation of hemin-induced reactive oxygen species (ROS) in neutrophils (9-12). It was previously reported that A1AT is involved in the pathophysiologic processes underlying ischemic AKI, and this redox-sensitive stress protein can exert dramatic renoprotective effects (13). Recently, an abundance of experimental data supported the concept that serum A1AT (sA1AT) was a potential marker of neutrophil activation, and the signal pathway was activated in patients with AKI induced by ischemia-reperfusion injury or renal toxicity (12-14). We therefore hypothesized that sA1AT might be associated with severe AKI and act as a non-invasive biomarker for early prediction of AKI after cardiopulmonary bypass (CPB).

In order to test and confirm the hypothesis, we have conducted a prospective cohort study involving 201 patients undergoing CPB and evaluated the performance of sA1AT compared with other selected biomarkers for predicting severe AKI in patients after cardiac surgery.

This was a prospective, single-center, cohort study approved by the Department of Cardiovascular Surgery, Nanfang Hospital, Southern Medical University. All the participants enrolled in this study provided written informed consent (ethics number NFEC-201509-K2, approved by the Research Ethics Committee of Nanfang Hospital). The study was conducted from 1 July to 31 December, 2017. All patients undergoing elective cardiac surgery with CPB between 18–80 years of age were eligible for this study. The exclusion criteria included exposure to pre-existing advanced CKD [chronic dialysis, renal transplantation, or pre-operative estimated glomerular filtration rate (eGFR) <30 mL/min per 1.73 m2], exposure to nephrotoxin drug therapies (receiving contrast media caused AKI, amino-glycoside antibiotics, vancomycin, and non-steroidal anti-inflammatory drugs [except aspirin]) within 4 weeks prior to surgery, and urinary tract infection or obstruction.

We collected spot urine and blood samples before operation (as baseline spot) and 2, 12, 24, and 48 hours after CPB. When CPB time exceeded 2 hours, sample was collected at the end of operation and was regarded as the first point after operation sample. All samples were centrifuged at 3,000 g for 10 minutes. The supernatant liquids were stored at −80 °C after labeled using study identification numbers without personal identifiers or clinical conditions. Serum creatinine was measured to determined changes in renal function. Clinical data were collected at the same time.

All biomarkers were measured in our central key laboratory following the standard protocol. Serum and urine A1AT levels and urine T cell immunoglobulin mucin-1 (uTIM-1) were measured at baseline, and 2, 12, 24, 48 hours after operation by ELISA kits (ab189579; Abcam, Cambridge, UK; and DY1750B; R&D Systems, Minneapolis, USA) according to manufacturer’s instructions. All biomarkers were measured in triplicate. The intra- and inter- assay variability ranged between 3–6% and 2–8% on the basis of blinded replicate samples from study patients, respectively.

Serum and urine creatinine were measured using an automatic biochemical analyzer (AU480; Olympus, Tokyo, Japan). All of the urinary biomarkers were normalized by urine creatinine.

The primary outcome was the development of severe AKI, which was defined as a 2-fold increase in serum creatinine after surgery compared to baseline, or as receiving acute dialysis [Kidney Disease Improving Global Outcomes (KDIGO) stage 2 or 3] (15). Mild AKI was defined as a serum creatinine level increasing up to 26.5 mmol/L (0.3 mg/dL), but not a 2-fold increase within 7 days (KDIGO stage 1) (15). Overall AKI was defined as severe AKI and mild AKI (KDIGO stage 1, 2, or 3) (15). The secondary outcome was the length of stay in the intensive care unit (ICU) and the hospital (including ICU stays).

Logistic regression analyses were performed to determine the relationships between severe AKI and sA1AT or urine A1AT (uA1AT) 2 hours after CPB, and clinical variables. We categorized the sA1AT 2 hours after CPB into four groups, and then performed Kaplan-Meier and cox regression analyses on created variables. To compare the performance of biomarkers, an area under the receiver operating characteristic curve (AUC) was generated. Adjusted (age, sex, BMI, SBP, preoperative eGFR, and CPB time) linear regression was performed to analyze the relationship between sA1AT and length of stay in the ICU and the hospital. The Hosmer-Lemeshow (HL) goodness of fit and variance inflation factor (VIF) analyses were performed to evaluate the model performance and assessment of collinearity.

Two hundreds and one patients subjected to cardiac surgery were included in the study followed by data analysis (Figure 1). All surgeries were elective and carried out in our center with CPB. Ninety-one (45.3%) patients developed overall AKI, and 22 (10.9%) among them developed severe AKI. Severe AKI occurred at 12 [2–12] hours after operation. Patients developing severe AKI were older, have a lower preoperative eGFR, lower contrast medium using, higher triple procedure, and longer CPB time than patients without AKI (Table 1). 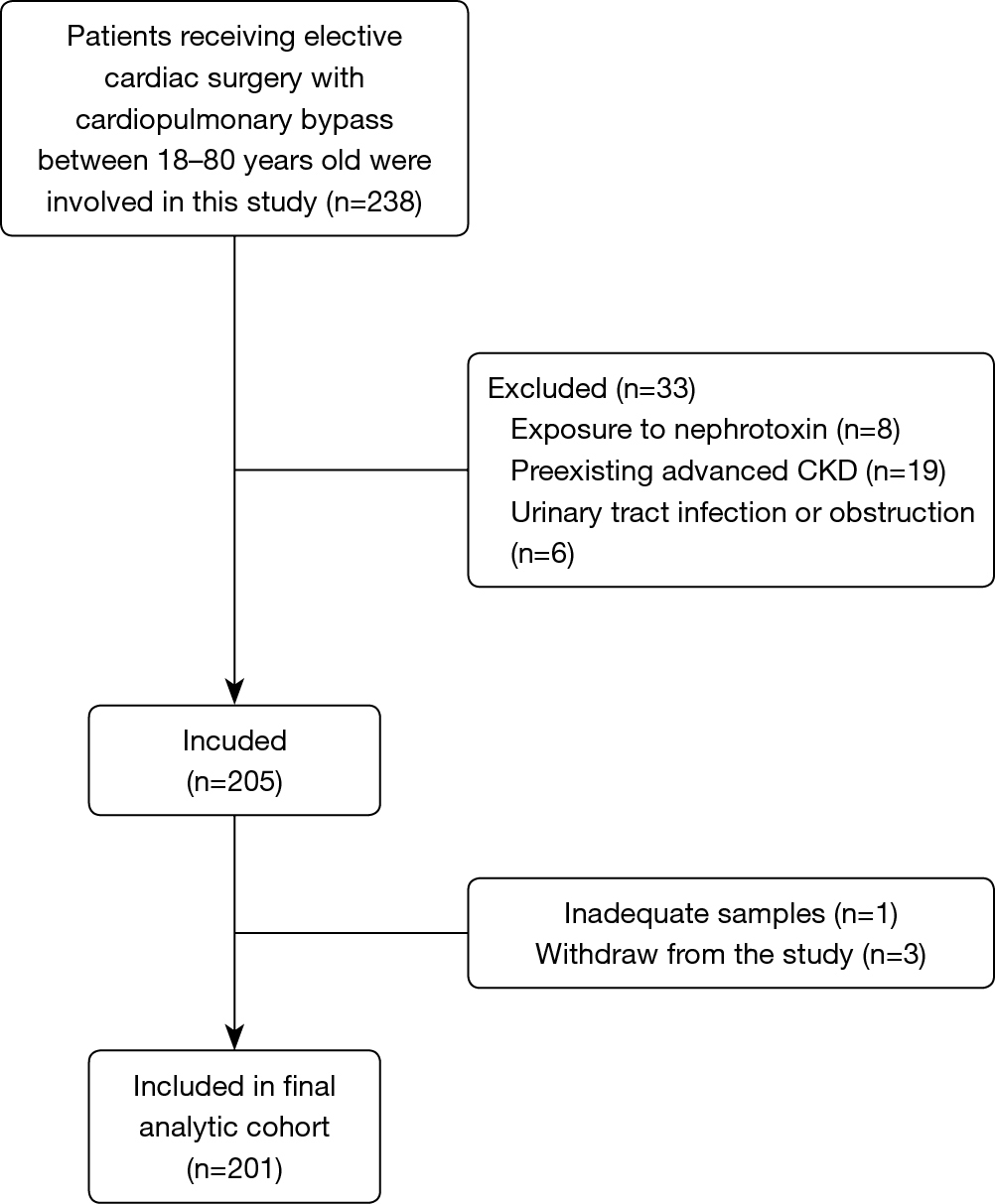 Figure 1 Flow diagram of patient selection into the study cohort. 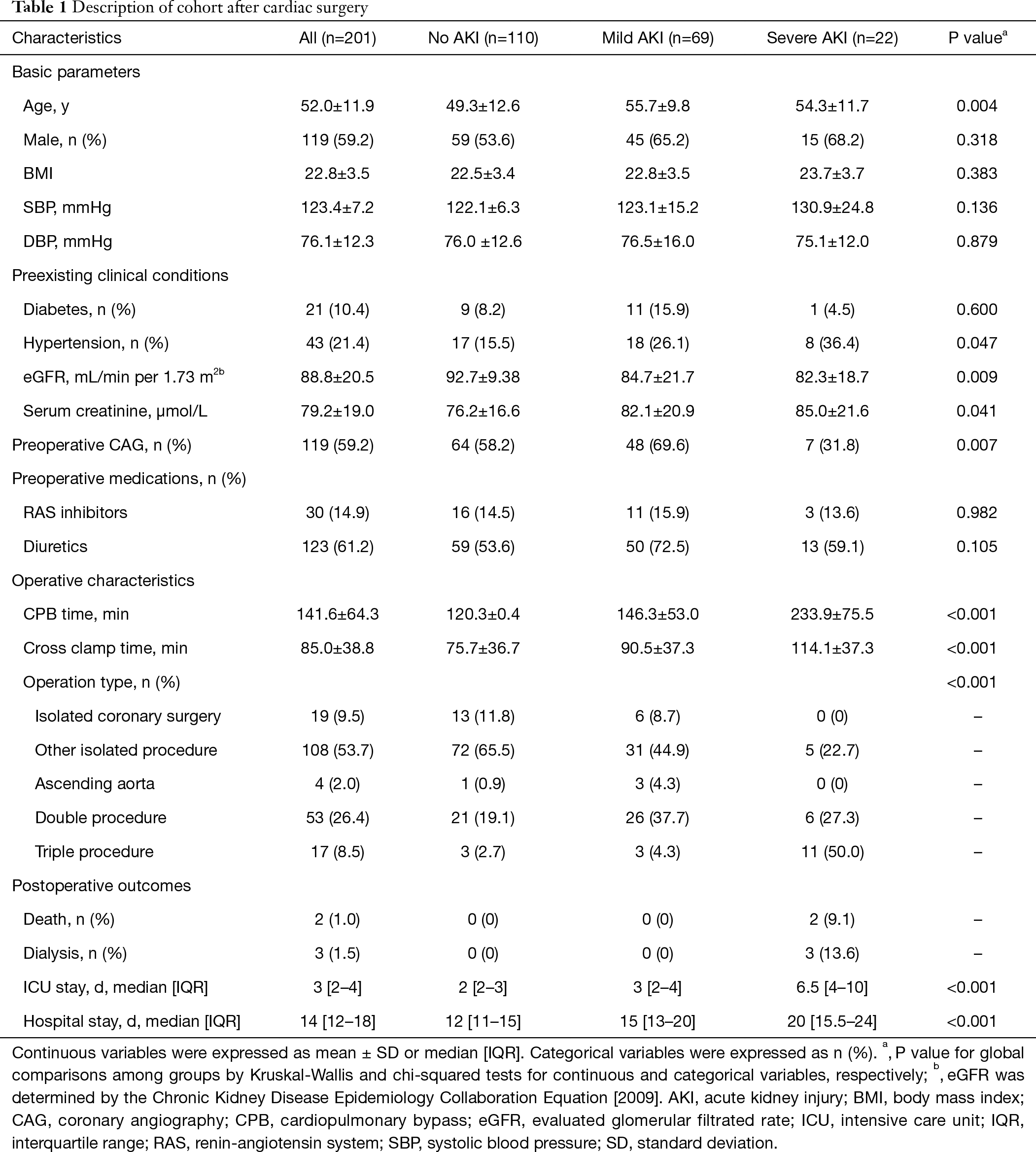 Serum A1AT as a predictor for developing severe AKI after CPB

As shown in Figure 2, sA1AT spiked immediately 2 hours after operation, maintained at the peak for 12 hours, and then decreased, while the peak in serum creatinine were 12–24 hours after CPB. Even though post-operative sA1AT increased in all individuals, patients with severe AKI displayed a higher magnitude changes over time compared with those who had mild AKI (P=0.001) or had no AKI (P<0.001). Unlike sA1AT, the uA1AT did not change significantly over time in patients with or without AKI (Figure S1). 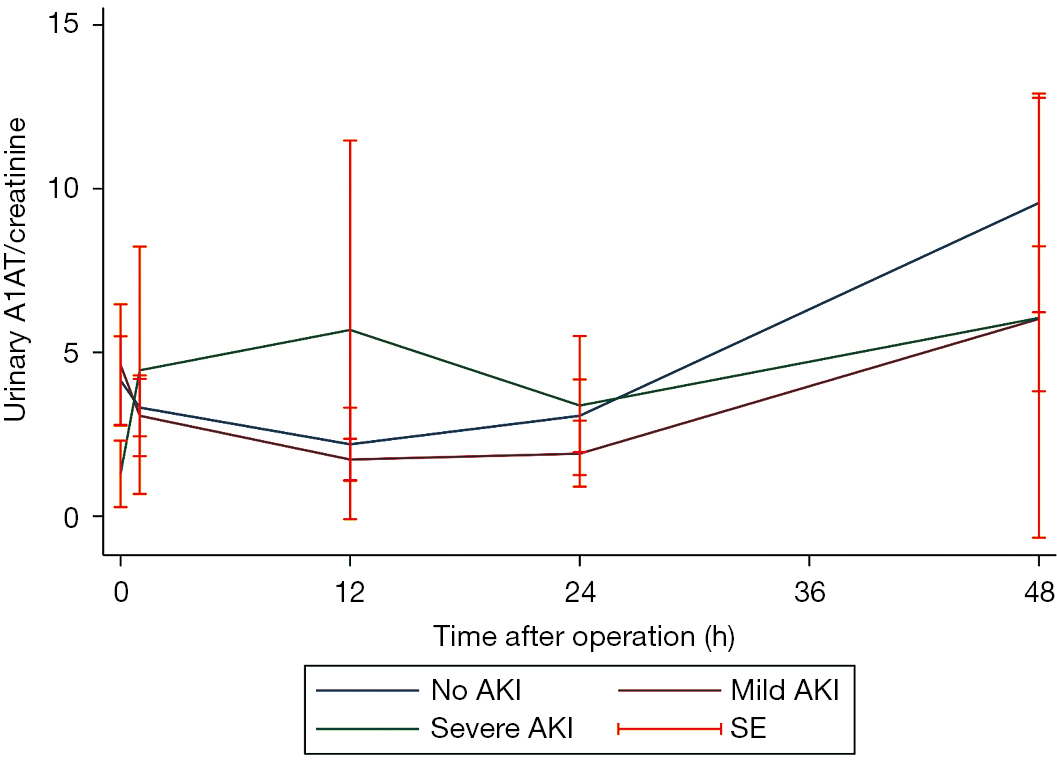 Figure 3 Quartile of sA1AT levels 2 hours after surgery had a graded relationship with incident severe AKI (A) and overall AKI (B). Patients with the highest quartile of the sA1AT levels had the highest incidence of severe AKI (29.4%, P<0.001 for trend; A) and overall AKI (60.8%, P<0.001 for trend; B). AKI, acute kidney injury; Q, quartile; sA1AT, serum alpha1-antitrypsin.

Serum A1AT as a predictor for outcome 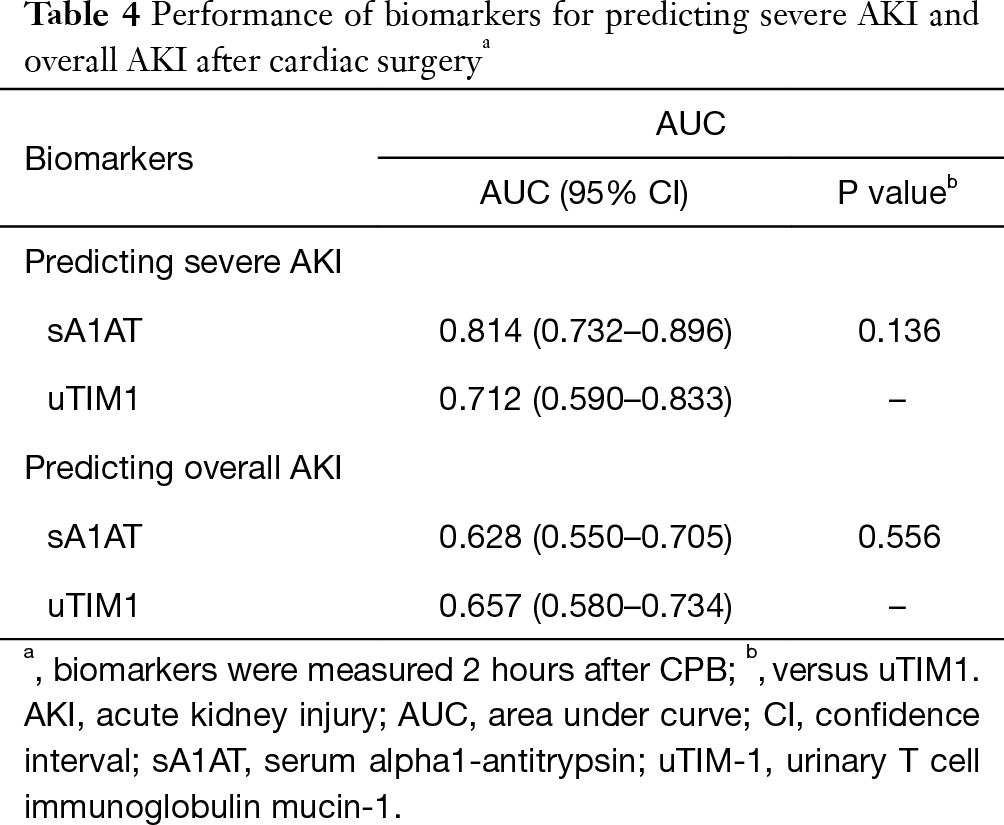 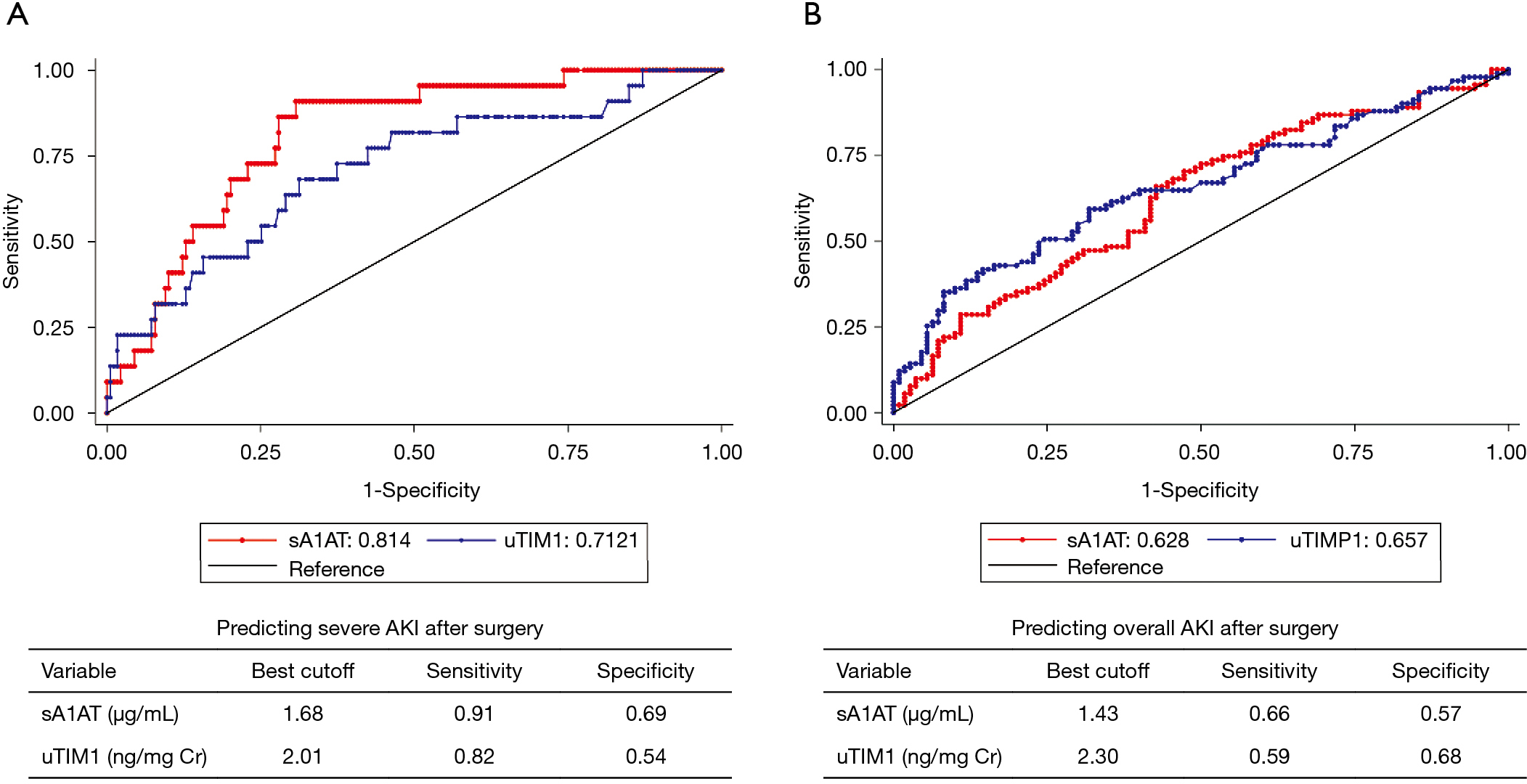 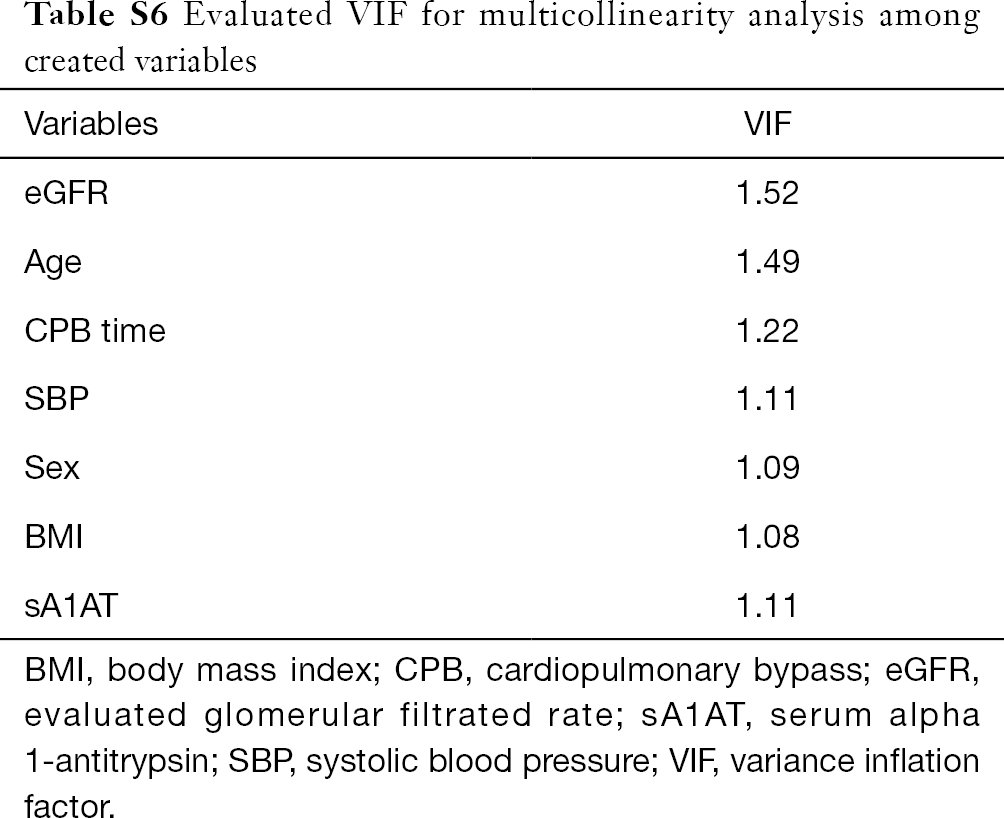 In this prospective cohort study, we have demonstrated that sA1AT measured 2 hours after operation closely associated with severe AKI and could serves as a wonderful predictor for severe AKI in patients undergoing CPB. Serum A1AT spiked earlier than serum creatinine in patients developed severe AKI after surgery. Higher sA1AT 2 hours after operation tightly associated with an increased risk of severe AKI. Patients with sA1AT (2 hours after CPB) >2.43 µg/mL presented 6-fold higher hazards of severe AKI compared to the lowest quartile. The AUC of sA1AT for predicting severe AKI was powerful. These data suggest that sA1AT measured immediately after CPB could provide important early prognostic information.

All the currently existing diagnostic criteria for AKI, including the RIFLE, AKIN, and KDIGO criteria, mainly rely on the serum creatinine level (2-4,15). However, severe injury has already occurred before any increase in the serum creatinine level. Timely diagnosis and early initiation of treatment would improve the clinical course and may yield substantial clinical benefit. A1AT is an acute phase protein, and is involved in the pathophysiologic processes underlying ischemic AKI (13). Until now, few studies have focused on sA1AT values with cardiac surgery-associated AKI. We have delineated the diagnostic value of perioperative sA1AT in this study. The sA1AT nearly reached a peak 2 hours after CBP, and remained at this peak for 12 hours in patients who subsequently developed severe AKI, while more than 50% of the serum creatinine increased 12 hours post-operation. However, uA1AT did not show any significant change in patients with or without AKI. Consistent with the experimental data, we predicted that sA1AT might be an earlier marker for AKI.

During the last decade, several studies have focused on novel biomarkers that could predict AKI after cardiac surgery, such as neutrophil gelatinase-associated lipocalin, uTIM-1, and urinary matrix metalloproteinase-7 (uMMP7) (18-21). However, only a few of the biomarkers have been universally accepted and are currently used in clinical practice. In this study, we noticed that the sA1AT 2 hours after operation closely and independently associated with development of severe AKI. The highest quartile of sA1AT presented the highest severe AKI incidence, which was 16-fold risk than quartile 1 and 2, and 3-fold risk than quartile 3. Collectively, it was evident that the early increased sA1AT was tightly associated with severe AKI after cardiac surgery. It might be an early predictor.

Consistent with previous reports, the performance of these markers for predicting AKI had an AUC of 0.72–0.80 (16-21). In our study, sA1AT 2 hours after operation with an AUC of 0.81 seemed to be a good biomarker for predicting severe AKI, which was better than that of uTIM1. On combining sA1AT with clinical variables, the AUC reached 0.908, which is regarded as pretty performance. Interestingly, the AUC reached 0.923 when we combined the sA1AT with uTIM1 and clinical model. These data supported that sA1AT was a powerful biomarker for predicting severe AKI, and the prognostic value of this marker achieved an exceptionally higher significance after a multi-marker approach was implemented.

Our study had displayed the following strengths and clinical advantages. First, the samples were prospectively collected under standardized conditions and strict criteria. All biomarkers were tested by skilled technicians in a central laboratory to ensure reliability and high quality. Second, sA1AT has been compared with other frequently used biomarkers to ensure the significance of its clinical value. Third, both continuous serum and urine biomarkers were tested simultaneously to determine the changes underlying pathophysiology of A1AT in patients after CPB. The quantification of sA1AT is easier (by ELISA kit), which has an advantage of clinical application.

The study also had several limitations. First, urine output was not used for AKI diagnosis because only two patients were anuric and were included in the severe AKI group. Second, the samples were collected and detected at 2, 12, 24, and 48 hours after operation. The lack of intervening data during other time points (for example, 6 hours after CPB) might be a possible drawback of our study if those data had some significance. Finally, this was a single-center study, and with an unique population hailing from southern China. Further multi-center studies should be considered to verify the value of sA1AT.

Ethical Statement: The authors are accountable for all aspects of the work in ensuring that questions related to the accuracy or integrity of any part of the work are appropriately investigated and resolved. This study was approved by the Research Ethics Committee of Nanfang Hospital (No. NFEC-201509-K2), all the participants enrolled in this study provided written informed consent.