Heart valve disease remains a significant contributor to cardiac morbidity and mortality (1). Surgical correction with either repair or replacement is recommended for patients with low risk for surgery (2). In recent years, minimally invasive cardiac surgery (MICS) has evolved significantly in major cardiac centers worldwide, which has potential advantages such as less blood loss, lower complication rates, faster recovery and better cosmetic results (3-5). One of the most characteristic technical strategies in MICS is to establish extracorporeal circulation via peripheral arterial-venous cannulation. In the absence of significant aortoiliac disease, femoral arterial and venous cannulation is the preferred choice of many cardiac surgeons for MICS procedures (6). It offers convenience and maximal utilization of space provided by using smaller incisions (7). However, incision or percutaneous femoral vein cannulation may cause venous endothelial injury and abnormal blood stasis. According to Virchow’s triad (8), endothelial injury and abnormal blood stasis are initiating factors of deep venous thrombosis (DVT). In addition, some other factors may increase the risk of DVT in patients underwent cardiac surgery including older age, postoperative complications, prolonged preoperative hospitalization or postoperative recovery (9), and so on. However, the occurrence of venous thromboembolism (VTE) after cardiac surgery cannot be prevented by intraoperative anticoagulation (10,11), especially for MICS via peripheral arterial-venous cannulation.

The practice of early pharmacological VTE prophylaxis after cardiac surgery is controversial (12). Some recommended prophylactic anticoagulation should commence on the first postoperative day (13), while others suggested prescribing low molecular weight heparin (LMWH) or low-dose unfractionated heparin to prolonged hospitalization patients with non-bleeding complications, due to the evidence-based clinical practice guidelines on antithrombotic therapy and prevention of thrombosis, that classified most patients undergoing cardiac surgery as being at moderate risk for VTE and at high risk for major bleeding complications (14), which may increase the risk of massive bleeding and pericardial tamponade (15).

LMWH is a heparin fragment with a low molecular weight (average molecular weight of 4,000–6,000 D) degraded from unfractionated heparin, which is widely recommended for prevention and treatment of pulmonary embolism (PE) as well as DVT and recurrence (16,17), due to its better bioavailability, more easily absorbed by subcutaneous injection, longer half-life, less adverse reactions, and better predictability of clinical effects (18,19).

However, there are only few studies revealed whether the benefits of early postoperative prophylactic anticoagulation with LMWH outweighed the potential harms for patients undergoing MICS. This study aimed to define the incidence of VTE including DVT and PE, and to assess whether early prophylactic anticoagulation with LMWH postoperatively increased risk of complications after MICS.

The study was a retrospective cohort study. Data of patients underwent MICS between January 2012 and December 2016 at Department of Cardiothoracic Surgery, Changzheng Hospital, Second Military Medical University were collected. The study protocol was approved by Committee on Ethic of Biomedicine Research, Second Military Medical University (No. 2011SL037), and met the ethical and legal requirements. All subjects have signed informed consent for surgery, perioperative therapy and related medical research. MICS patients with complete medical records were enrolled. Patients with infective endocarditis, a history of severe coagulopathy, active bleeding after surgery and bleeding-prone organ damage were excluded. Detailed medical information of enrolled patients was obtained from our hospital database. Among 473 enrolled patients, 257 patients (54.3%) received LMWH (LMWH group) in the early postoperative period and the rest were not treated with LMWH (Control group).

Superior partial median sternotomy or right anterior mini-thoracotomy incision was performed in isolated aortic valve replacement; right anterolateral mini-thoracotomy or inferior partial median sternotomy incision was applied in isolated mitral valve repair/replacement, isolated tricuspid valve repair, or mitral valve repair/replacement concomitant with tricuspid valve repair. Choices of surgical approach were decided by the surgeons. Systemic heparinization was performed according to adjusted calculation model of heparin doses as described previously (21). Extracorporeal circulation was established via femoral arterial-venous cannulation. Myocardial protection was performed by aortic root antegrade perfusion and/or coronary sinus retrograde perfusion. One milligram of protamine was used to neutralize 100U of heparin at the end of extracorporeal circulation, and was added according to activated clotting time. All patients in the LMWH group received a subcutaneous injection of 40 mg of enoxaparin (Clexane, SANOFI WINTHROP INDUSTRIE, France) once daily, the initial dose of which was generally administered 6 hours postoperatively. Warfarin anticoagulation was initiated after removal of the chest tube in patients undergoing valve replacement surgery. For patients receiving warfarin, enoxaparin was continued to be applied until meeting international normalized ratio target value. For patients who did not receive warfarin, enoxaparin was applied up to the start of ambulation. Postoperative transfusion triggers were hemoglobin ≤7 g/dL and/or hematocrit ≤28%. The chest tube could be removed as the 24-hour total drainage volume was less than 150 mL.

Propensity-score matching (PSM) was used to compare matched study cohorts between the LMWH group and the control group in order to reduce the impact of selection bias and potential confounders (22). A multivariate logistic regression analysis was used to determine the propensity of MICS patients’ postoperative LMWH application. Propensity score representing the likelihood of receiving LMWH treatment was calculated by the logistic equation. A 1:1 nearest neighbor matching (with a caliper width of 0.2) was used to generate study cohorts with equal sample sizes. Statistical analysis was performed on IBM SPSS Statistics, version 22.0 (SPSS, Inc., Armonk, NY, USA) and R statistical software, version 2.15.1 (The R Foundation: http://www.R-project.org).

In the matched cohorts, no significant covariate difference was found between the two groups (Table 1). 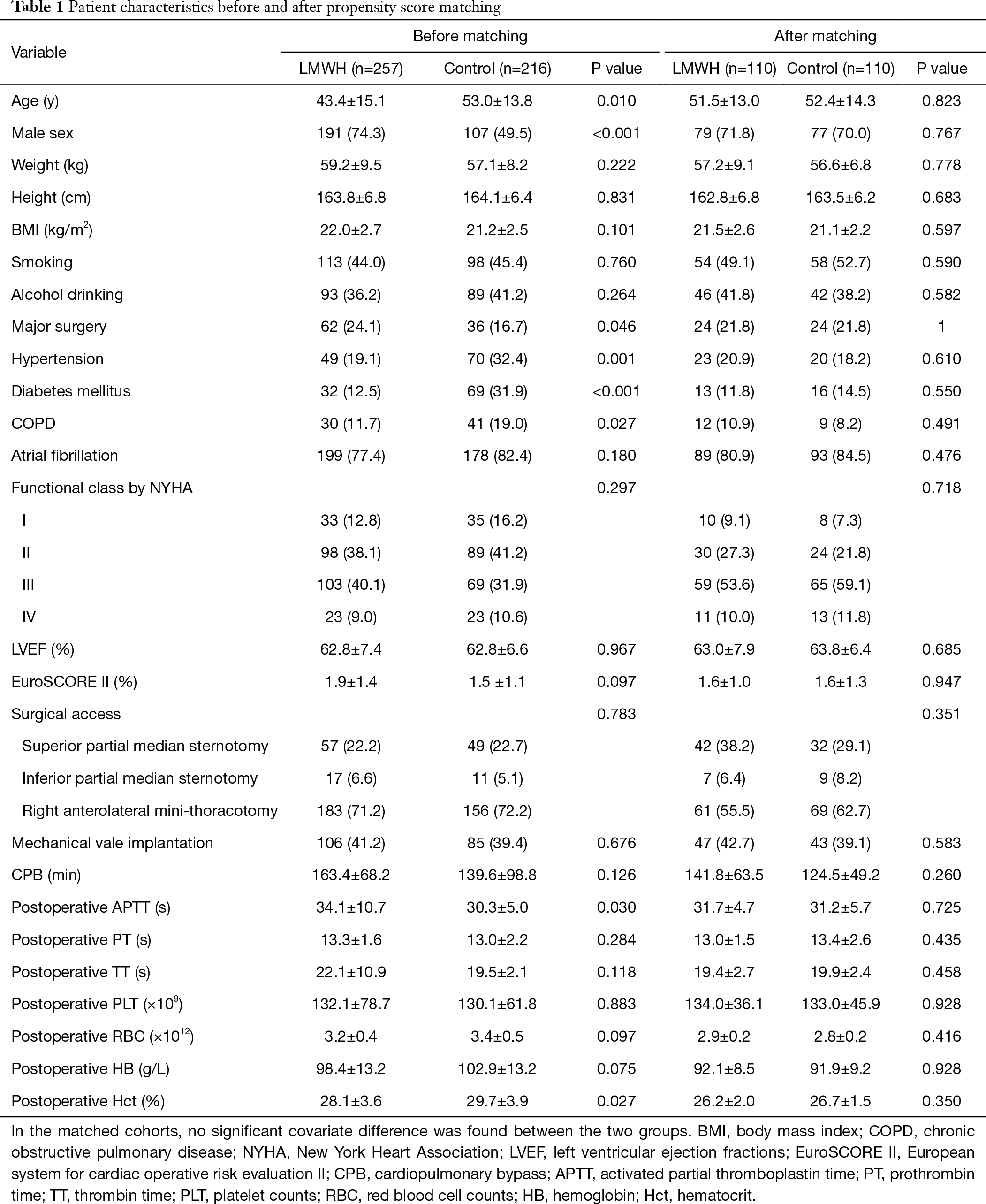 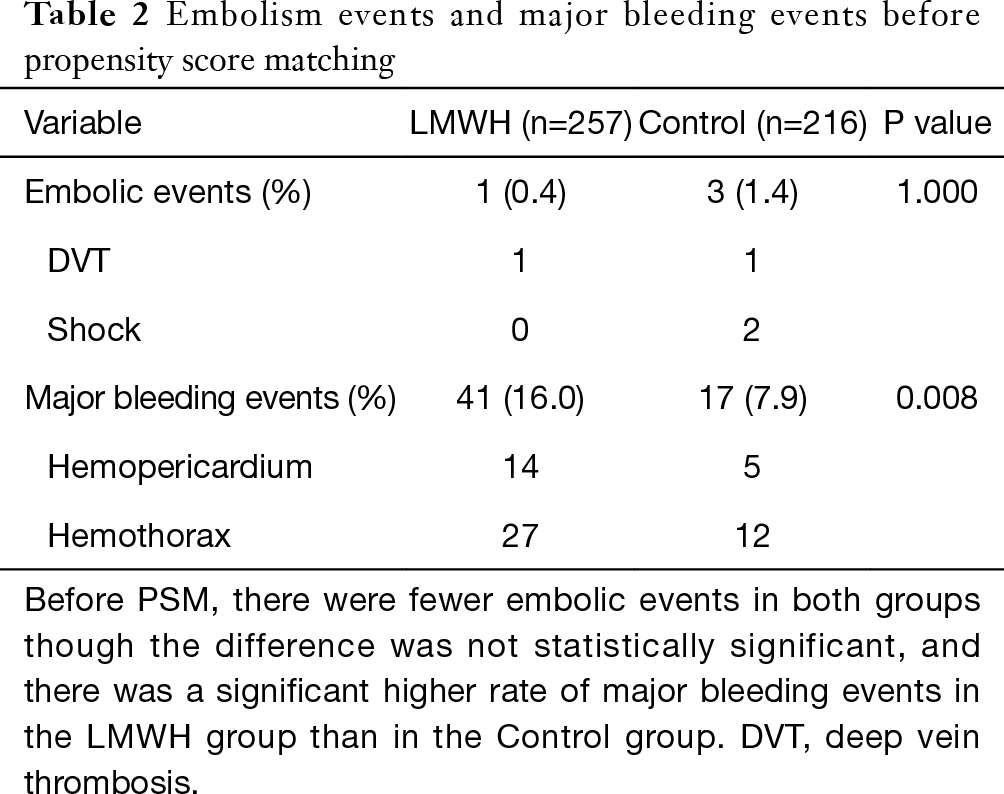 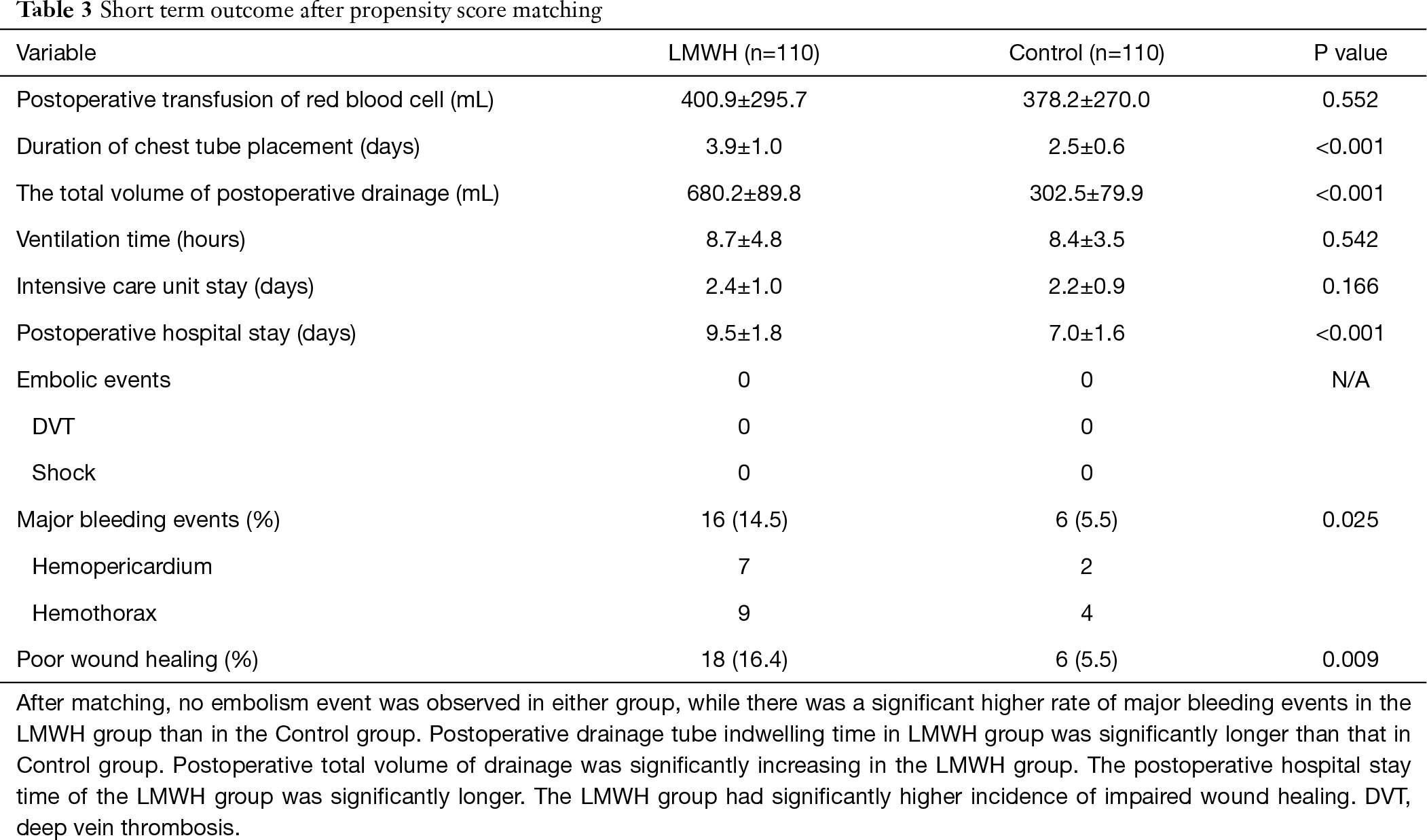 MICS surgery represents technical innovations within the field of cardiac surgery (23). Peripheral cardiopulmonary bypass with femoral cannulation is currently the most commonly used method in MICS (24). Although it offers many advantages over conventional surgery (3-5), there are few studies reporting the complications associate with these procedures (25), there were no study research whether it would increase the risk of VTE and there has been no consensus about whether to apply with LMWH for early prophylactic anticoagulation among MICS patients (9). To our knowledge, this is the first report using retrospective PSM cohorts to assess the benefits and possible harms of early prophylactic LMWH postoperatively in patients underwent MICS.

Aziz and colleague report incidence of DVT after cardiac surgery was 2.07% (10). Our research results are no higher than theirs, which may mean that MICS is not a risk factor for venous thromboembolism. There is evidence that a prothrombotic state is common after cardiac surgery (26). According to the European Association for Cardiothoracic Surgery guidelines, prophylactic anti-coagulation for VTE should be commenced from the first postoperative day (13). LMWH seems to offer effective and stable anticoagulation and has been used in observational series (27-30). This study demonstrated that early prophylactic anticoagulation with LMWH did not significantly reduce the incidence of embolism events, while increased the incidence of bleeding events. The early postoperative use of LMWH increased the total volume of drainage, thereby delaying the removal of chest tube, and early postoperative use of LMWH did not benefit MICS patients at clinical endpoints, even if most patients were at high risk of thrombosis [Caprini Score (31) greater than 5 points]. The injury of venous endothelial during MICS did not increase the incidence of DVT, we assumed it had been compensated by early ambulant after MICS although many patients had a high Caprini Score. In addition, some researches showed that the Chinese population had lower risk of thrombotic events but higher risk of bleeding events compared with western populations (32-34). Our findings revealed that early use of LMWH for anticoagulation might increase the total volume of drainage and chest tube indwelling time.

Moreover, early use of LMWH for anticoagulation might increase the incidence of pericardial effusion and pleural effusion, comparing to control group, the incidence of delayed postoperative hemopericardium and hemothorax is significantly higher in LMWH group, which might lead to longer hospitalization. Besides, higher incidence of impaired wound healing in LMWH group might be contributed by to heparin-related subcutaneous bleeding.

Our retrospective study presents several limitations. First, this was a single-center study with a relatively small sample size, which resulted in low incidence of embolic events. Second, all enrolled patients in this study underwent valve surgery, and valvular heart disease usually had a long history and congestive heart failure, that often led to underlying preoperative liver dysfunction, which cause these patients had higher risk of bleeding than embolism events, and that could be one reason for little benefit of early postoperative administration of LMWH in MICS patients. Due to few patients suffered from coronary heart disease undergoing minimally invasive bypass surgery in our hospital, whether postoperative injection of LMWH could benefit these patients remained unknown.

Early prophylactic anticoagulation with LMWH could not reduce the incidence of embolism events after MICS. Instead, it might increase postoperative bleeding events and extend drainage tube indwelling time and the length of hospital stay. We need more evidence to support the use of LMWH for VTE prophylaxis in patients underwent MICS.

Ethical Statement: The authors are accountable for all aspects of the work in ensuring that questions related to the accuracy or integrity of any part of the work are appropriately investigated and resolved. The study protocol was approved by Committee on Ethic of Biomedicine Research, Second Military Medical University (No. 2011SL037), and met the ethical and legal requirements. All subjects have signed informed consent for surgery, perioperative therapy and related medical research.