Lung cancer remains the most common cause of cancer death worldwide (1), with non-small cell lung cancer (NSCLC) accounting for the major histology (2). For early stage NSCLC, surgery resection is the best treatment, with 5-year overall survival of only 36–73% (3). The TNM staging system based on the extent of the primary tumor, involvement of regional lymph nodes and spread to distant sites, is widely used as a guide for predicting prognosis of lung cancer in clinical practice (3). Moreover, the wide range of survival rates in NSCLC patients within the same stage indicates that other factors, such as age, gender, histology, cell differentiation and the number of examined lymph nodes also contribute to the prognosis of NSCLC (4).

Recently, nomogram has been widely used to quantify risk in several types of cancers (5-7), which creates an intuitive graph of a statistical predictive model by incorporating biological and clinical variables to generate a numerical probability of a clinical event (8). Some studies have reported that nomograms are more reliable in predicting the recurrence than the traditional staging systems for patients with early stage resected NSCLC (9-12). However, few study has referred to nomograms that predict overall survival after surgery treatment in early stage NSCLC patients, particularly in Chinese population.

Thus, we aimed to construct a prognostic nomogram with demographic and clinicopathologic variables to investigate whether such nomogram would provide accurate prediction for overall survival of early stage NSCLC patients after surgery resection.

Our study was approved by the Institutional Review Board of Nanjing Medical University (FWA00001501). All patients were consecutively recruited between September 2002 and December 2011 from the Cancer Hospital of Jiangsu Province and the First Affiliated Hospital of Nanjing Medical University, Nanjing, China. All cases underwent complete resection and confirmed histopathologically by at least two qualified pathologists. TNM stage was classified according to the Union for International Cancer Control/American Joint Committee on Cancer (UICC/AJCC) 7th stage system (3). Only patients diagnosed with pathologic stage I or pathologic stage II NSCLC were included. Those who had (I) a prior history of malignancy, (II) local advanced or metastatic disease (pathologic stage III or pathologic stage IV), (III) neoadjuvant chemotherapy and radiotherapy and (IV) a wedge resection were excluded.

All patients were followed up every 3 months through telephone contacts by trained investigators from the time of enrollment until death or last contact (last follow-up: July 2015). The follow-up data included image examination, treatment information (chemotherapy or radiotherapy) and survival status (alive, dead, time of death and cause of death). Additionally, the latest medical records were also checked as a complement. Finally, a total of 443 patients who had both follow-up and available clinical information were included in this study. Overall survival time was defined as the interval between diagnosis and the date of death or latest follow-up.

Construction of the nomogram

Continuous variables were transformed into categorical variables according to the median, such as age and station of sampled lymph nodes. In the univariate analysis, log-rank test was used to compare the survival time for categorical variables and survival curves were depicted using the Kaplan-Meier method. Next, variables with P value <0.05 through above analysis entered into multivariate Cox regression model to identify independent prognostic factors. A nomogram was then formulated based on these independent prognostic factors (P<0.05) in the final model and delineated by using the R package ‘rms’. The selection of the final model was using a backward step-down process with the Akaike information criterion (13).

Validation of the NOMOGRAM

The performance of the nomogram was assessed by Harrell’s concordance index (C-index) that ranged from 0.5 (no discriminative ability) to 1 (perfect discrimination) (14). Bootstrap resamples (1,000 times) was used for internal validation of predictive accuracy and to provide a relatively unbiased estimate of C-index (13). Then, calibration plots for 3-, 5-year overall survival probability were depicted to compare the predicted survival and observed survival after the bias correction of bootstrap resample (1,000 times).

Statistical analyses were carried out using R software (version 3.6.1; The R Foundation for Statistical Computing, http://www.cran.r-project.org/). All tests were two-sided, with the significance level at P<0.05. 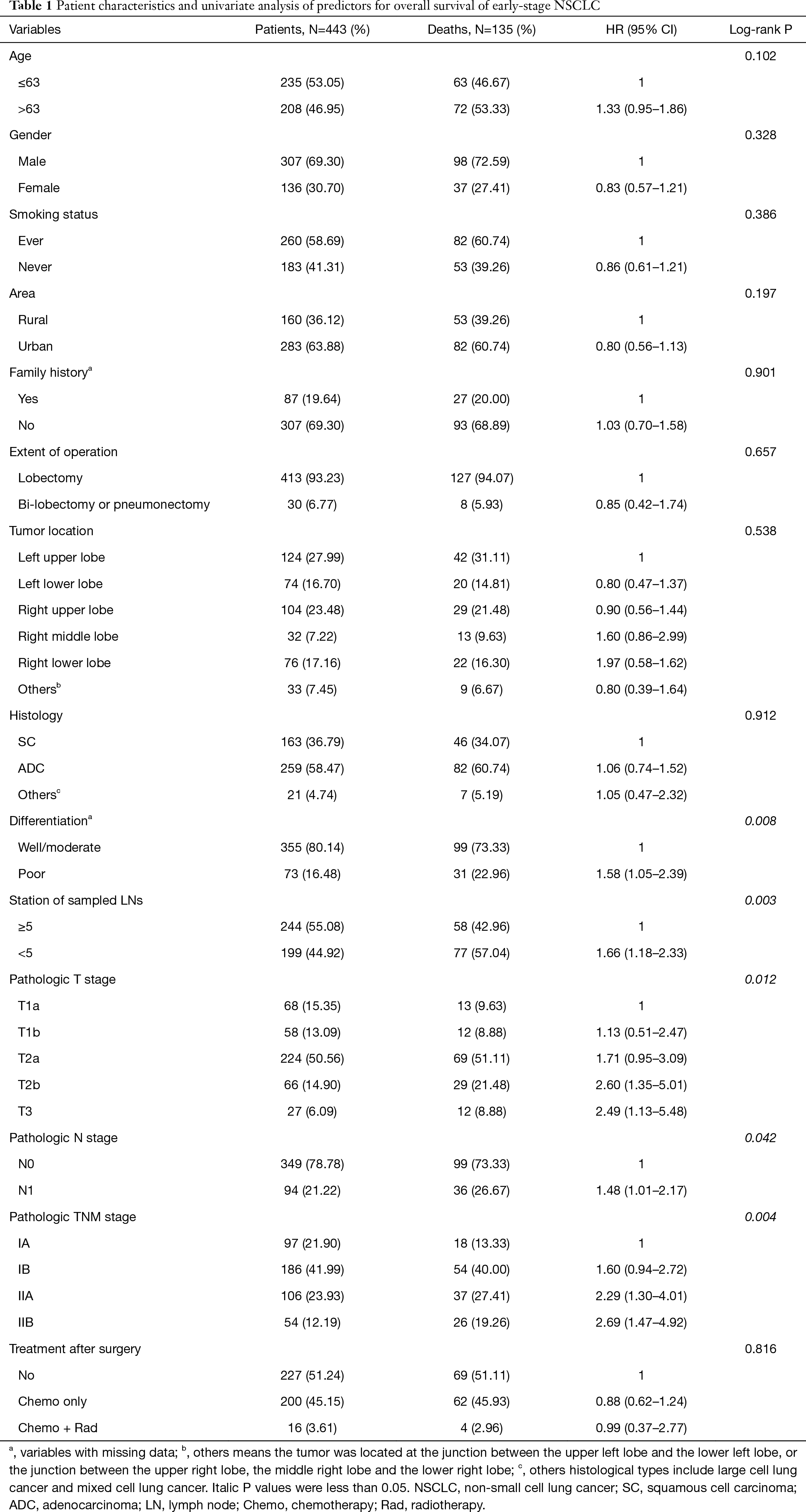 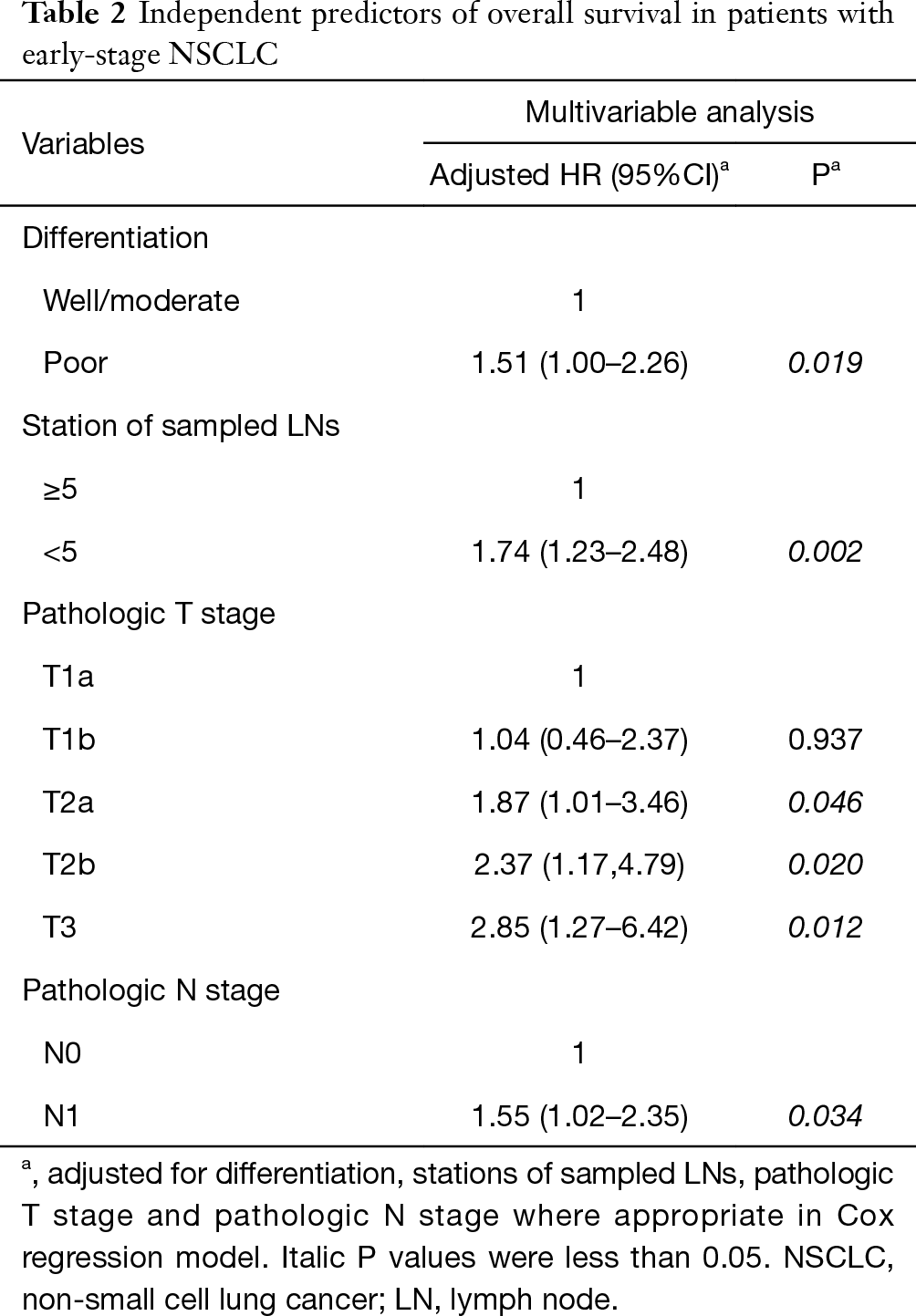 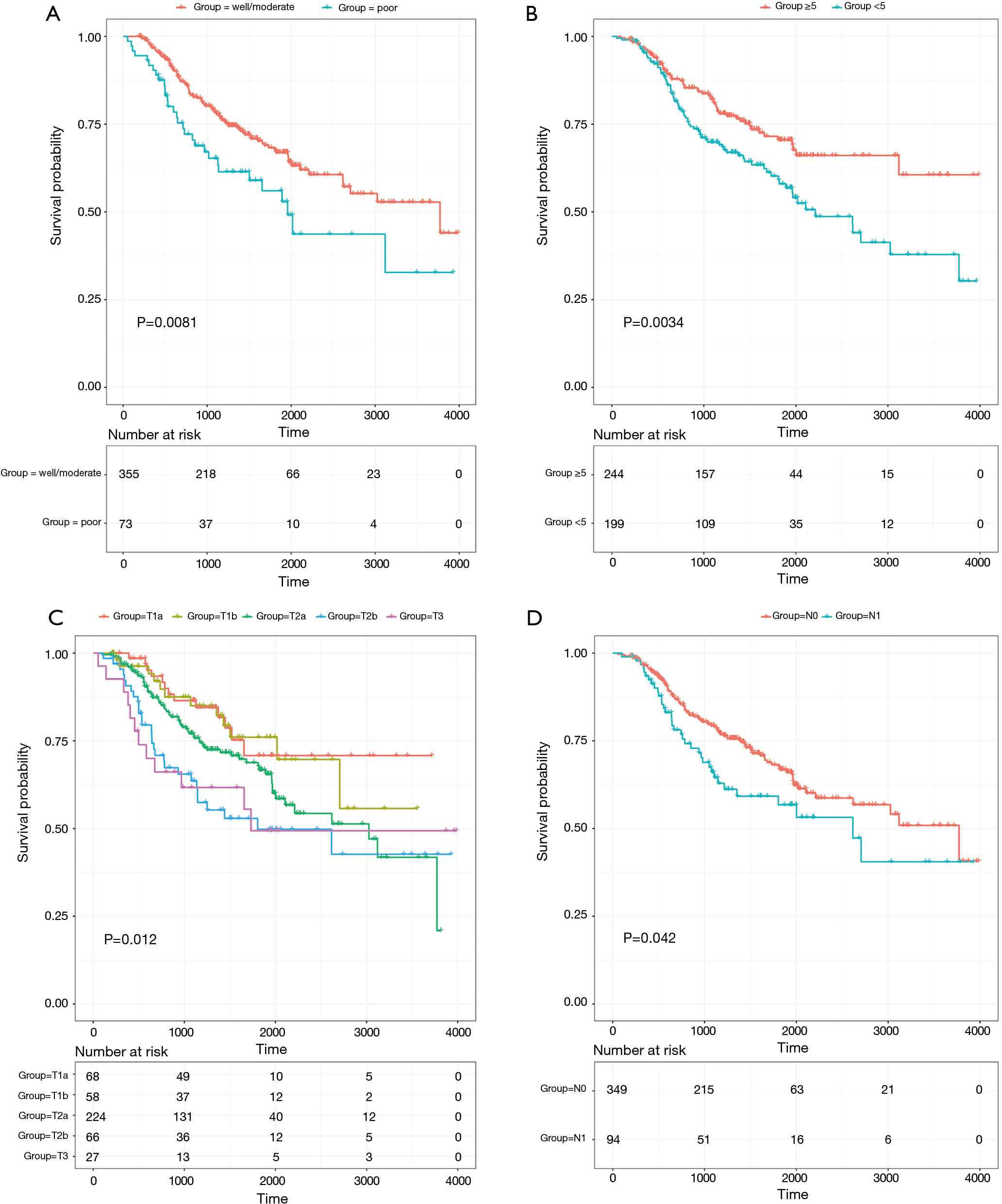 Moreover, a nomogram incorporating above four independent prognostic factors was constructed to predict the 3- and 5-year overall survival for early stage NSCLC patients (Figure 2). The pathologic T shared the largest weight in the nomogram, followed by station of sampled lymph nodes, differentiation, and pathologic N. The calibration plot demonstrated that the predicted 3- and 5-year overall survival probabilities corresponded closely with the actually observed probabilities (Figure 3). Finally, for predictive accuracy of overall survival, nomogram had a bia-corrected C-index of 0.622 (95% CI: 0.572–0.672). And for the conventional TNM staging system, the C-index was 0.596 (95% CI: 0.551–0.641). 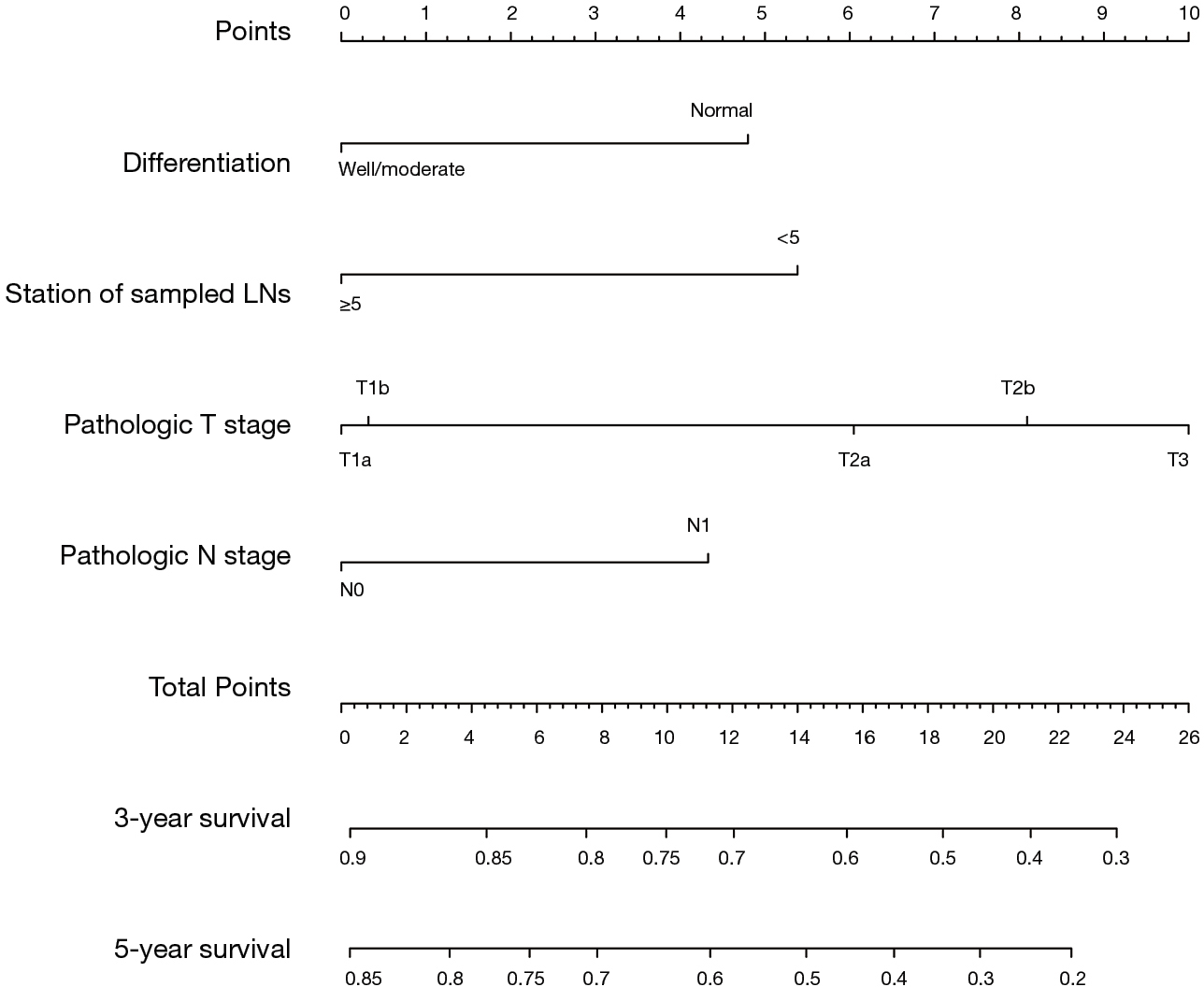 Figure 2 Postoperative prognostic nomogram for patients with early stage non-small cell lung cancer after surgery resection. To use, for example, the user should find one patient’s differentiation on the differentiation axis, then draw a straight line upward to the point axis to determine how many points toward death the patient receives for differentiation. Do above process again for the other axes (station of sampled lymph nodes, pathologic T stage and pathologic N stage), each time drawing a straight line upward toward point axis. Sum points received for each predictor, and find sum on the total point axis. Draw straight line down to survival-probability axes to find patient’s 3- or 5-year survival probability. LNs, lymph nodes.

The TNM staging system is widely used for predicting prognosis of cancer, however, the ability of such staging system in predicting the survival of cancer was limited. In this study, we built a nomogram that well predicted the overall survival of early stage NSCLC patients after surgery resection with four independent prognostic factors (tumor differentiation, station of sampled lymph nodes, pathologic T and pathologic N). Furthermore, the discrimination of nomogram was comparatively stable with a fairly high C-index and the calibration plot also showed moderate goodness of fit.

In our study, the 5-year survival in pathologic stage Ia NSCLC patients who underwent complete surgical resection was 72%, which was consistent with previous study result (3). However, the 5-year survival in stage Ib–IIb were relatively higher than that of previous study (Ib: 66% vs. 58%; IIa: 54% vs. 46%; IIb: 48% vs. 36%) (3). Although the follow-up in our study was relatively long and regular, the limited sample size might contribute to such difference.

According to the present TNM staging system, the dominant factors for prognosis of early stage NSCLC were pathologic T (T1a/T1b/T2a/T2b/T3) and pathologic N (N0/N1) (3). However, for our overall survival model, the C-index of the stage alone accounted for only approximately 60% of information, with the other factors we considered accounting for the rest (15). Our study revealed that there were other prognostic factors, including tumor differentiation and station of sampled lymph nodes, which significantly affected the overall survival of early stage NSCLC. Therefore, we added these prognostic factors in the nomogram model, and found the C-index of the model increased to 0.62.

Prior studies were controversial about the prognostic value of tumor differentiation. For example, several studies indicated that poorly differentiated NSCLC after resection contributed to the poor prognosis (16,17); however, other studies showed that poor differentiation was not associated with the worse outcome of early stage NSCLC (18). In our study, poor differentiation was significantly associated with poor survival of early stage NSCLC, suggesting that this factor may provide useful information in defining the aggressiveness of tumor. The diversity of results might be due to sample size and non-standardized histologic grade classification of lung cancer (16,19).

Nomogram, which integrates multiple risk factors to predict survival, has been identified as a useful and convenient tool in lung cancer study. For example, nomograms have been established to predict brain metastases after curative resection in NSCLC patients, the overall survival after resection of synchronous lung cancer in more than one lobe, the overall survival of stage III NSCLC patients, the response to tyrosine kinase inhibitors in EGFR-mutation NSCLC patients and the overall survival in small cell lung cancer patients (12,27-30). Whereas, for the nomogram of early stage (pathologic stage I or pathologic stage II) NSCLC, recent study mainly focused on predicting the disease-free survival after surgical resection (9,31). Sun et al. constructed a nomogram to predict prognosis after surgery in early stage non-small cell lung cancer in elderly patients (≥65 years) (32). They included sex, age, pathology, differentiation, tumor diameter, and surgery type these six factors. The C-index of their study was similar to ours here, but their conclusion was for the elderly patients. Kent et al. (33) reported that age, baseline percent diffusing capacity of lung for carbon monoxide, and maximum tumor diameter were significantly associated with the survival. However, they only included clinical stage I NSCLC patients who underwent sublobar resection with or without brachytherapy, as opposed to our study that enrolled pathologic stage I and pathologic stage II patients with multiple types of surgical resection. Additionally, they did not consider the result of tumor differentiation as a potential prognostic factor.

Our study had some limitations that should be addressed. Firstly, because of missing values for some variables, we failed to integrate other potential prognostic factors, such as vascular invasion, perineural invasion, performance status, pulmonary function testing and genetic factors (e.g., EGFR mutation, ALK-EML4 fusion) (33-35). In addition, a relative small sample in this study limited the power of the statistics analysis, and there was no statistical significance in the comparison of the C-index of 7th TNM staging with our nomogram. Finally, although the method of bootstrap resampling was used to avoid overfitting (36), both predictive accuracy of the nomogram and its widespread applicability should be validated in other studies. So, further efforts on multi-center study and prospective data collection including other potential factors are encouraged to refine this nomogram.

The authors wish to thank all the study participants, research staff and students who participated in this work.

Ethical Statement: The authors are accountable for all aspects of the work in ensuring that questions related to the accuracy or integrity of any part of the work are appropriately investigated and resolved. We further confirm that any aspect of the work covered in this manuscript that has involved human patients has been conducted with the ethical approval of all relevant bodies and that such approvals are acknowledged within the manuscript. Our study was approved by the Institutional Review Board of Nanjing Medical University (FWA00001501).