Congenital pulmonary airway malformation (CPAM) is a disease in which bronchioles abnormally proliferate and form various sizes of cysts in the fetal period. Traditionally, CPAM has been classified according to Stocker (1) into five major types (Type 0 to Type 4) based on the histopathological cyst diameter and location. The type of CPAM reflects the progression of developmental abnormalities through the tracheobronchial tree, from large airways to bronchioles and alveoli (2). Although the precise etiology of CPAM is not known, it is thought to be the result of hamartomatous malformation and abnormal proliferation of the pulmonary tissue at different sites (3).

Surgical resection is the standard care for symptomatic CPAM; however, the management of asymptomatic CPAM remains controversial. Although the morbidity and mortality of surgery should be taken into account, many series recommend early surgical resection to avoid the eventual development of complications such as recurrent infections, spontaneous pneumothorax, or even the rare development of lung malignancy (4).

The aim of this study is to report our surgical outcome of CPAM in neonates and infants and to evaluate the optimal timing of surgical intervention including C-VATS.

Patient backgrounds and operation data were compared in infants between the thoracotomy Group and complete video-assisted thoracic surgery (C-VATS) Group. Statistical analysis was performed using Mann-Whitney U test for continuous variables (age and height/weight at intervention, operative time, blood loss, postoperative day of drain removal, and length of hospital stay after surgery). All statistical analyses were performed with EZR (Saitama Medical Center, Jichi Medical University, Saitama, Japan). More precisely, EZR is a modified version of R commander (version 1.6-3) designed to add statistical functions used frequently used in biostatistics. The statistical significance was determined at P<0.05. The study was approved by the Research Ethics Board of the Mie University School of Medicine.

Between January 2008 and March 2017, a total of 13 consecutive pulmonary resections were performed for 4 neonates (3 boys and 1 girl) and 9 infants (3 boys and 6 girls) with CPAM. In the group of neonates, all 4 cases were prenatally diagnosed and they underwent semi-emergent surgery after birth due to respiratory failure; 2 required preoperative ventilator management. Mean age and weight for surgery was 5 days (median 5.5: range 1–8 days) and 2.9 kg (median 2.85: range 2.2–3.6 kg). The locations of malformation were: 1 right upper lobe, 1 right middle lobe, 1 right lower lobe, 1 left lower lobe.

In the group of infants, 5 cases were prenatally diagnosed and 4 cases were initially diagnosed at the following ages: 2 years 6 months, 3 years 1 month, 3 years 6 months and 5 years 4 months, due to symptoms associated with pulmonary cystic infection such as fever and cough. If their neonatal condition was stable, surgery was electively planned after the age of one. In addition, C-VATS lobectomy was also considered when differential lung ventilation for thoracoscopic surgery was deemed technically feasible based on the body size of infants. Mean age and weight for surgery was 2 years 3 months (median 21: range 12–68 months) and 12.2 kg (median 11.5: range 7.3–17.8 kg). The locations of malformation were 3 right lower lobes, 3 left upper lobes, and 3 left lower lobes (Table 1). 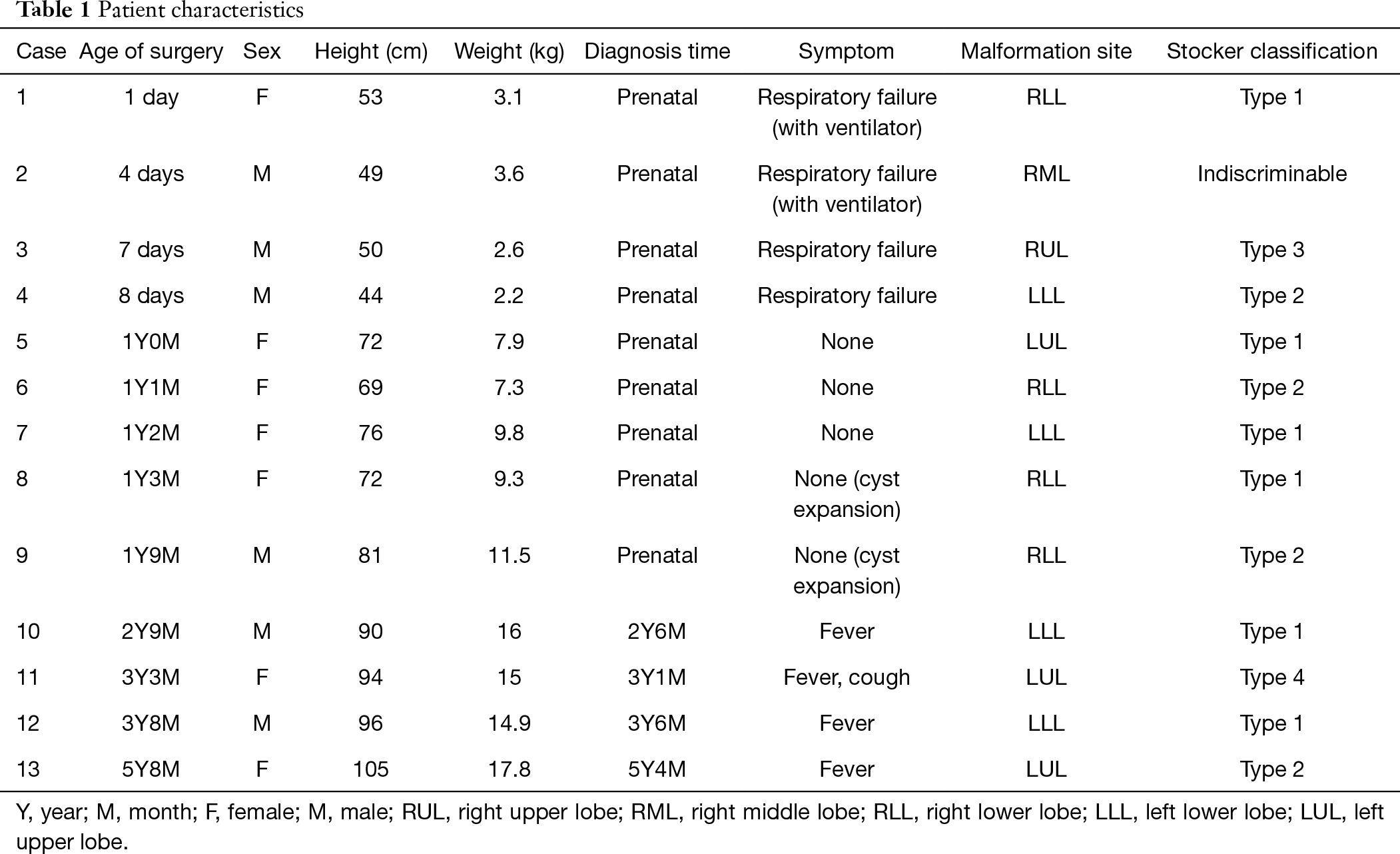 Pulmonary resection consisted of the following: lobectomy in 8 cases, segmentectomy in 1 case, wedge resection in 2 cases, fractionated lung resection in 1 case and lobectomy plus segmentectomy in 1 case. Overall, there were 9 thoracotomy and 4 thoracoscopic surgery. Mean operation time was 162 min (range, 67–290 min) and blood loss was 21 mL (range, 0–74 mL) on average. Pathological examination revealed the following: Type 1 in 6 cases, Type 2 in 4 cases, Type 3 in 1 case, Type 4 in 1 case (one case was indistinguishable). None of the cases showed malignant conversion of the cystic wall. The follow-up period after surgery was 20.5±17.1 months. No postoperative complications were observed during hospitalization (Table 2). Moreover, even in the long-term results, all cases survived and there were no complications, such as thoracic deformity or respiratory failure. However, 2 of patients who underwent segmentectomy showed a cystic remnant (Case 4, Case 6). 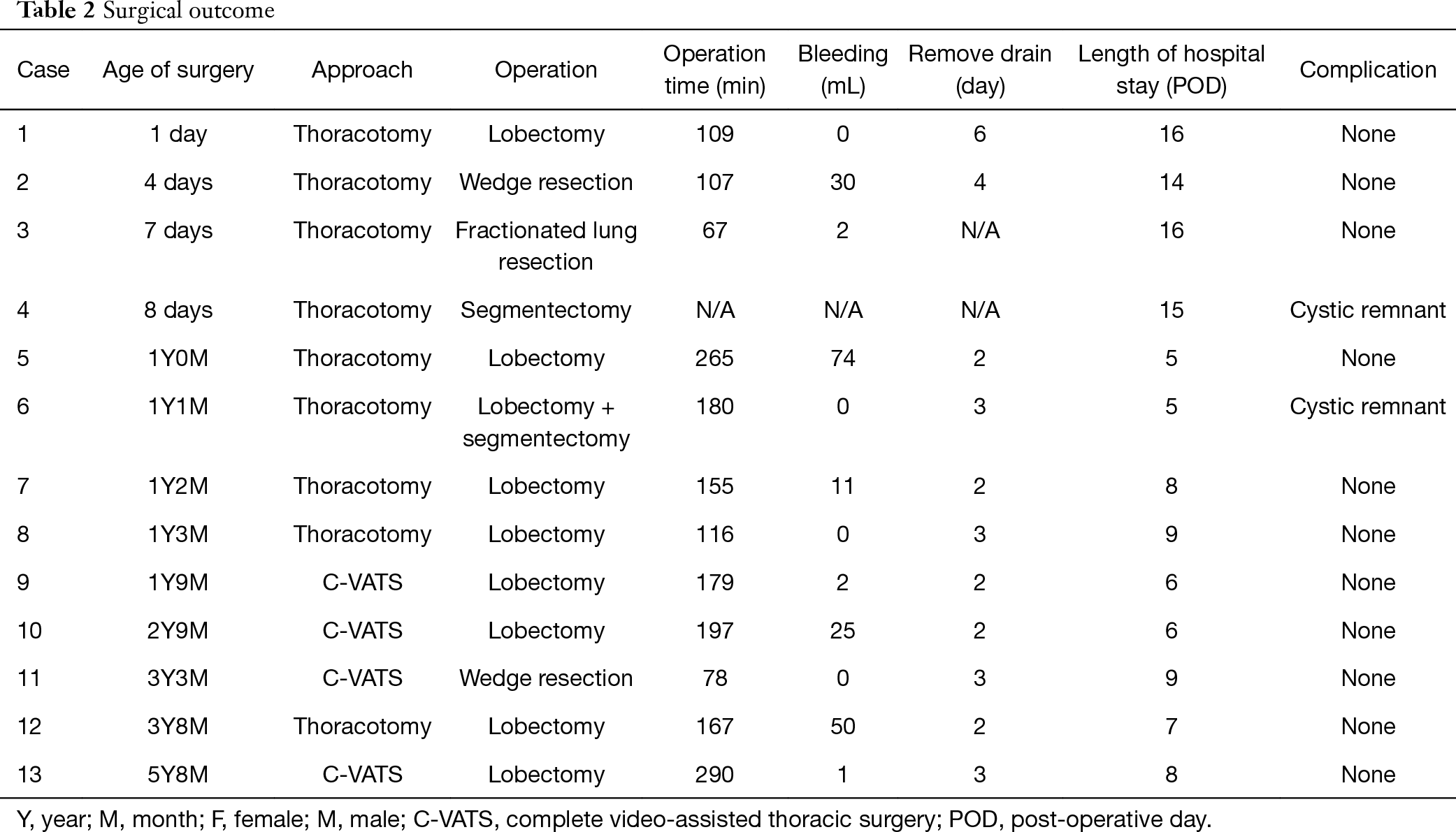 No statistically significant differences were observed between the thoracotomy Group and C-VATS group in terms of age and height at intervention, operation time, blood loss, postoperative day of drain removal, and length of hospital stay after surgery. However, only the body weight was heavier in C-VATS group (P=0.03) (Table 3).

At the age of 1 year 9 months (BW 11.5 kg), C-VATS lobectomy was successfully performed (Case 9, Figure 1). The CT images and histological features of this case is presented in Figure 2. 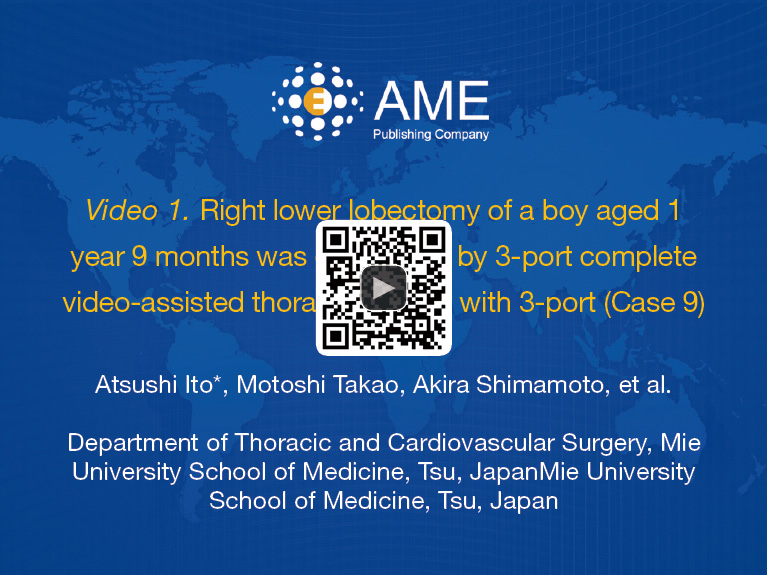 Since the surgical instruments for adults cannot be used in infants, we selected the three-part dismantling CLICK line series for pediatric laparoscopic surgery (Karl Stortz, Inc., Tuttlingen, Germany) and a 5 mm rigid endoscope. Intraoperative differential ventilation is also essential for the adequate visualization and exposure of the other lung, especially during the thoracoscopic approach (6). As there is no appropriate size double-lumen tube in neonates and infants, differential lung ventilation with a bronchial blocker is necessary. However, the slip joint between the tracheal tube and the breathing circuit is the narrowest point in the space to maneuver the bronchial fiber and the blocker can be limited especially with the smaller size of tubes (5.5-mm ID or less) (7). To simultaneously insert the fiber and the blocker into a thin tracheal tube, it is necessary to exchange it with a slip joint of larger size or remove it and insert them separately (Figure 3).

Figure 3 In order to simultaneously insert the bronchial fiber and the bronchial blocker into a thin tracheal tube, it is necessary to remove the slip joint and insert them separately.

CPAM accounts for 95% of congenital cystic lung diseases and it is the most common cystic lung lesion diagnosed by prenatal screening at 18–20 weeks of gestation. A commonly quoted incidence of CPAM is 1 per 25,000–35,000 live births (2). CPAMs are usually identified during routine obstetric care due to the advances of ultrasound technology. Additionally, infants with this abnormality most commonly present with respiratory distress and recurrent pulmonary infections (8). Surgical management of asymptomatic CPAM is a highly contested issue in pediatric thoracic surgery. Despite several studies, the timing of surgical treatment and resection procedures has not been clearly defined.

In our cases requiring surgery in the neonatal period, NICU management was necessary due to unstable general and respiratory conditions. Although semi-emergent surgery was required immediately after birth for survival, the prenatal diagnosis of all neonates enabled us to plan the surgical preparation at an early stage. Since differential lung ventilation is difficult in neonates, we performed thoracotomy in all cases. In our cases, there were no serious complications after surgery. This can be explained by the protective effect of the maternal antibody, namely, the high levels of immunoglobulin G that are transferred to the fetus in utero which are still observed at 1.5 months of age, and decrease in the first 6 months of life (9,10).

Although there seems to be no argument about the surgery in neonates, we should be concerned about several issues with the surgery in infants. The reason why asymptomatic patients with CPAM need surgery in infants is the prevention of infection and malignant conversion of the cystic wall. As in our cases, when their condition is stable without any symptoms or infections, we recommend that they undergo surgery after the age of one for appropriate growth. In addition, we propose that C-VATS lobectomy may be feasible if they are older than 18 months or weigh more than 10 kg from the viewpoint of vessel/bronchial dissection technique and differential ventilation during anesthesia (Figure 4). 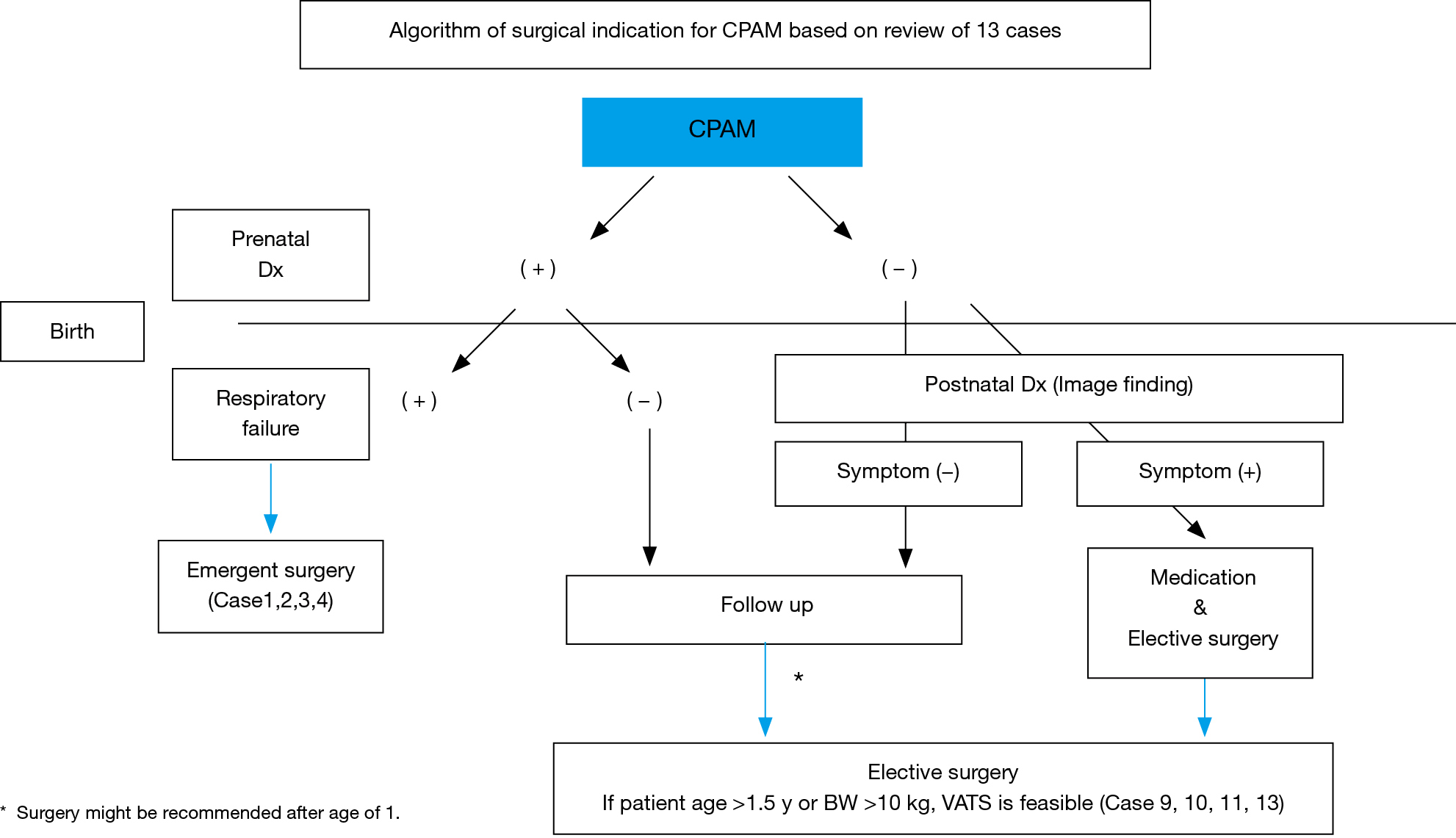 Wong et al. reported that nearly all of the asymptomatic patients with CPAM at birth developed symptoms by their later pre-school years or even during adolescence (11). However, since the prenatal diagnosis in the report was not advanced as it is today, it is to be noted that the cohort by Wong et al concerns a selected group of patients that cannot be directly compared to patients in current practice. In our study, all cases after 2 years of age underwent surgery due to infection. Considering the possible difficulty of surgery in cases of a thoracic adhesion associated with infection, surgery performed between 1 and 2 years might be appropriate in asymptomatic cases.

On the other hand, some reports recommend surgical intervention earlier than our recommendation (12,13). Style et al. reported that patients who undergo resection at an earlier age (resection ≤4 months) had shorter operative times and duration of anesthesia than the late resection group (resection >4 months) (12). However, in their report, two patients with resection at less than 4 months required conversion of thoracoscopic resection to thoracotomy due to bleeding from the pulmonary artery owing to technical issues. Thoracoscopic resection should be avoided if there are technical difficulties since bleeding from the pulmonary artery could be fatal in pediatric surgery. In order to safely perform C-VATS in infants, we recommend waiting to age 18 months or weight of more than 10 kg.

Although the natural course of unresected CPAM is unknown, several studies have shown that some cases will stay asymptomatic for years (14). Furthermore, previous literature reported a paradoxical increase of infections after surgical resection (15). For infants who remain completely asymptomatic, the decision between surgical management and observation is controversial. However, we prefer complete resection of all lesions of CPAM base on reports of the potential for malignant transformation. As no predictive factor of malignant conversion of the cystic wall is currently available, only systematic removal can effectively avoid such conversion. CPAM Type 1 is a precursor of mucinous bronchioloalveolar carcinoma. CPAM Type 4 is a precursor of rhabdomyosarcoma (10). Furthermore, the differential diagnosis between CPAM and pleuropulmonary blastoma is not always easy on imaging. Delayed recognition or failure to resect pleuropulmonary blastoma significantly worsens the prognosis (16). Unlike the method of bullectomy in adult emphysema, it is preferable to resect all lesions of CPAM due to the possibility of malignant transformation of the cystic wall.

Thoracoscopic surgery for asymptomatic patients with CPAM during infancy is now commonly performed, and most reports have high success rates without significant postoperative complications (17,18). In addition, Mattioli et al. noted the superiority of thoracoscopic surgery in terms of both the length of postoperative hospitalization compared with thoracotomy and the fact that thoracotomy can induce thoracic deformation and scoliosis (6). CPAM seems to be one of the diseases that has seen the most dramatic increase in application of thoracoscopy (19).

Patients with respiratory failure after birth due to CPAM require surgery within 1 week, nevertheless, the postoperative course is considerably good. Since early surgical resection of asymptomatic CPAM is often recommended for the prevention of infection and the development of lung malignancy, we recommend performing surgery after the age of 1 year if the patient’s condition is stable. Furthermore, C-VATS lobectomy may be feasible if they are older than 18 months or weigh more than 10 kg.

Ethical Statement: The authors are accountable for all aspects of the work in ensuring that questions related to the accuracy or integrity of any part of the work are appropriately investigated and resolved. This study was approved by the institutional ethics board of Mie University Hospital (No. H2019-043). Appropriate written informed consent was obtained for the publication of this report and the accompanying images and videos.