The comprehensive data of ELCNC patients diagnosed from 2004 to 2015 were extracted from the SEER database (http://seer.cancer.gov/) using SEER*Stat software version 8.3.5 (https://seer.cancer.gov/seerstat/). The study recruited patients according to the third edition (ICD-O-3) histology code 8013/3, as determined by the International Classification of Diseases for Oncology. Each selected patient had histopathologically proven malignant ELCNC. Patients with non-primary tumors, less detailed personal features, and incomplete follow-up data were excluded.

Race, age, sex, insurance type, marital status, tumor size, number of malignant tumors, grade, the American Joint Committee on Cancer (AJCC) stage of the primary cancer, therapeutic methods used, vital status, year of diagnosis, and survival data of selected patients were included in the SEER database. The TNM staging system was confirmed according to the AJCC seventh edition criteria. Survival data [overall survival (OS)] meant the time from the date of diagnosis until the date of death from any reason, or the point of the last follow-up.

Multi-class variables such as race, age, or tumor size were contrasted by chi-square tests between ELCNC, ESCNC, and ESCC, while two categorical variables or ordered variables like sex, tumor grade, or stage were compared through rank sum tests. Log-rank tests and Kaplan-Meier analyses were applied for univariate analyses, aiming to construct survival curves. Furthermore, Cox model tests were used for multivariate analyses to further predict the progress of ELCNC. All the analyses were conducted by using SPSS (version 25) software (SPSS, Chicago, IL, USA), and P<0.05 was regarded as statistically significant. All were two-sided tests. Survival curves were generated using R language (v3.5.1) software, and the primary packages were Survival and Survminer (8,9).

Survival data indicated that the 1- and 3-year survival rates of ELCNC were 27.8% and 8.3%, respectively. No patients survived for more than 5 years. There were significant differences in the progresses between ELCNC, ESCNC and ESCC using a calibration curve (P=0.00042) especially for ELCNC and ESCC (P=0.0058) (Figure 1 and Figure S1A). Nevertheless, as suggested by the data shown in Figure S1B, the survival times of ELCNC and ESCNC were similar (P=0.2). 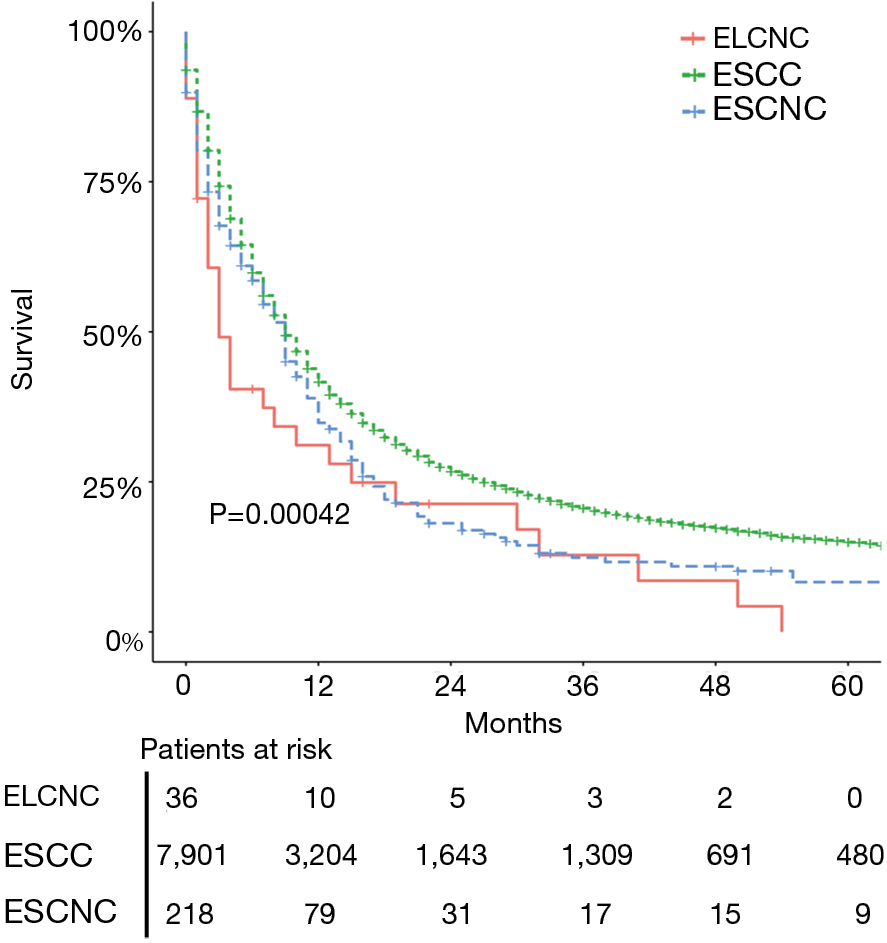 Specific prognostic factors in patients with ELCNC were investigated by univariate analyses. As shown in Figure 2, age (P=0.015), AJCC 7th stage (P=0.039), and M stage (P=0.02) with prognoses of ELCNC were proven to be significantly different. Older age and higher AJCC 7th stage were correlated with shorter survival time. Nevertheless, total univariate analyses did not show that patients who accepted any therapy had a better prognosis than patients who did not. 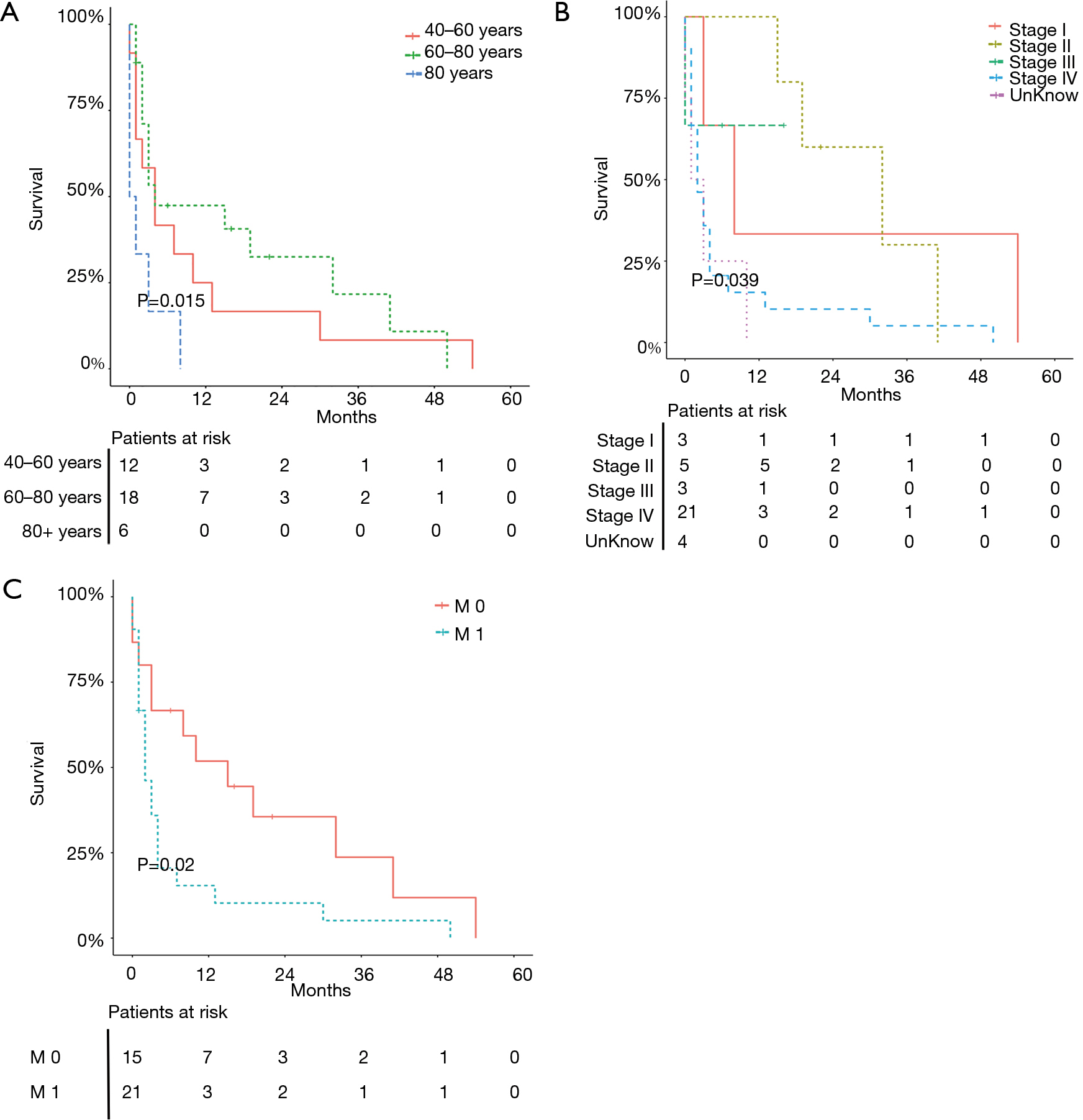 As shown in Table 2, a more detailed analysis indicated that the risk factors of age (P=0.001) and M stage (P=0.004) were significantly different as assessed by univariate analyses, which were confirmed to be independent factors in accordance with multivariate analyses. Therefore, older-aged patients and higher M stages may lead to the worse prognoses, according to multivariate analyses data. 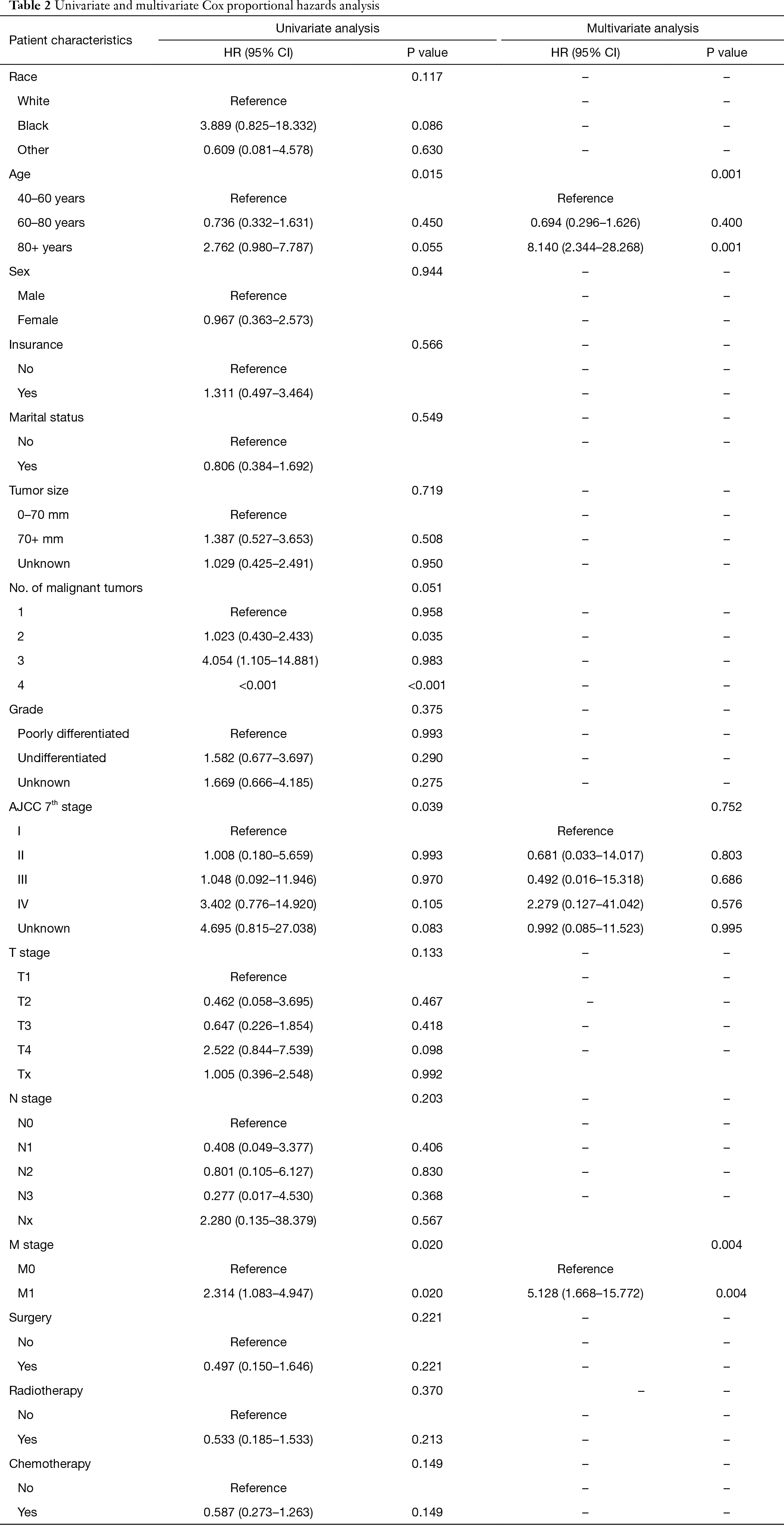 Few cases of ELCNC have been reported in the literature. This may be a result of the poorly developed neuroendocrine system in the esophagus (10,11). Currently, ELCNC is diagnosed according to the presence of neuroendocrine (NE) morphology, especially when more than 20% of tumor cells express NE markers (7).

Due to the poor prognosis of ELCNC, the general survival time is no more than 5 years. Similar to previous studies (12,13), we indicated that the prognosis of ELCNC was worse than for ESCC (P=0.0058), with no significant difference of ESCNC (P=0.2). It is worth mentioning that ELCNC and ESCNC, forming part of the spectrum of neuroendocrine tumors, show later tumor differentiation and TNM stage relatively. Therefore, the prognosis is worse than squamous cell carcinoma.

We found from the SEER database that there were significant differences between ELCNC, ESCNC, and ESCC in terms of sex, marital status, tumor size, tumor grade, N stage, surgery, and radiotherapy. In addition to this, the risk factors of race, insurance, total TNM stage, and M stage differed between ELCNC and ESCC. Clinically, ELCNC and ESCNC could be distinguished by immunohistochemistry, so it is not difficult to observe similarities and differences in biological characteristics between them (14). However, considering the content of neuroendocrine cells in tumor tissues and the rare number of cases, several clinicopathological features such as tumor size and grade of the two esophageal neuroendocrine tumors could be used in our study. Furthermore, we also detected that age, TNM stage, and M stage were independent influencing factors for the prognosis of patients with ELCNC, using univariate analyses. Thus, only age and M stage remained after multivariate analyses. All the patients from our study were middle-aged and older (>40 years old), and the average age of onset was approximately 65 years of age, which was consistent with previous literature (11,15). Because mucosal glands of the distal esophagus typically contain more neuroendocrine cells, as shown by endoscopic findings, ELCNCs are mainly located in the lower third of the esophagus (11,16). Our research also suggested that most cases were in the advanced stage, in agreement with the four phases of TNM staging. Consequently, the possibility of distant metastasis was greater.

At present, due to the low incidence of ELCNC, prospective and randomized clinical trials of optimal treatments are not easily accomplished. Given the similarities of histological and clinical features between ELCNC and ESCNC, studies have shown that multimodal therapies should be used in ELCNC, which normally is the same regimen used for SCLC (17,18). To some extent, radical surgery is still considered an important part of the comprehensive treatment regimen for the limited period of ELCNC. Medgyesy et al. demonstrated that the survival time of the radiotherapy and chemotherapy group was also lower than that of the surgery group (10). However, as a systemic disease, most patients with ELCNC have distant micrometastases and regional lymph node metastasis at the time of surgery. Therefore, surgery alone may not completely eradicate the tumor. Raja et al. conducted a large sample meta-analysis and concluded that chemotherapy should be the most basic treatment, and chemotherapy combined with surgery or chemotherapy combined with radiotherapy might bring further survival benefits (19). However, resulted from the small sample size, there was no significant difference in the prognosis of all therapeutic treatments in our study.

Some reports on targeted therapies (such as bevacizumab, nimotuzumab, and thalidomide) have been applied in SCLC patients, but they have not brought a clear benefit. The effect of targeted therapy in ELCNC is rarely reported and requires further study; however, this could be a treatment option for ELCNC (20,21).

Ethical Statement: The authors are accountable for all aspects of the work in ensuring that questions related to the accuracy or integrity of any part of the work are appropriately investigated and resolved. All the data files were obtained with permission from the SEER database, which is publicly available, therefore approval was not necessary by the local ethics committee.