We performed a monocentric retrospective analysis for a prospectively collected patients receiving thoracic surgery with or without intraoperative TPVB between November 7, 2018 and April 1, 2019, at Shanghai Chest Hospital. Whether or not to use TPVB depending on anesthesiologists’ preference, the chances of harm and benefit of each patient after discussed with their anesthetist. This study was approved by the Institutional Review Board (KS1862) of Shanghai Jiao tong University Shanghai Chest Hospital with the consent of the patient or family member and signed informed consent (Chinese Clinical Trial Registry number, ChiCTR1800019526).

Criteria for inclusion and exclusion

Inclusion criteria were patients at least 65 years, ASA I–III grade were scheduled for thoracic surgery were selected. Chest wall resections, bilateral lung resection, conversion to thoracotomy and ipsilateral reoperation were excluded. A total of 154 patients with lung operations were included in the final analysis, 34 of whom received general anesthesia combined with TPVB (GA-TPVB).

Patients were monitored with electrocardiography, non-invasive blood pressure, pulse oximetry, capnography. General Anesthesia was induced with 0.6 µg/kg sufentanil and a target-controlled infusion of propofol set to a plasma concentration of 4 µg/mL, cisatracurium 0.2 mg/kg was given to facilitate double-lumen bronchial tube intubation. Propofol administration was adjusted to of 2.5 µg/mL and Cisatracurium adjusted to 0.12 mg/kg/hour, remifentanil adjusted to 0.1 µg/kg/h in the maintenance period. Invasive blood pressure monitoring was achieved by radial artery cannulation (IBP) and right internal jugular central venous catheterization (CVP). Patients were placed in lateral decubitus. For TPVB, 15 mL of 0.5% ropivacaine was given to T4–T5, performed by specific anesthesiologists under ultrasound guidance before operation. Intraoperatively adoption of lung protective ventilation strategies, including low tidal volume (≤8 mL/kg) ventilation based on ideal body weight, PEEP =5 cmH2O, lung recruitment and maintenance of airway pressure <30 cmH2O. Sufentanil 5 µg was given before skin incision. Patient controlled analgesia (PCA) pump was used in all patients after operation. The drug used in the pump was sufentanil 1 µg/kg + dezocine 0.4 mg/kg.

A total of 154 patients were enrolled in the final analysis, 34 patients (22%) who received GA-TPVB (Figure 1). The incidence of PPCs undergoing thoracic surgery was about 21.4% (33/154). There were no significant differences in pre- and intraoperative patient characteristics between the two groups (Table 1). 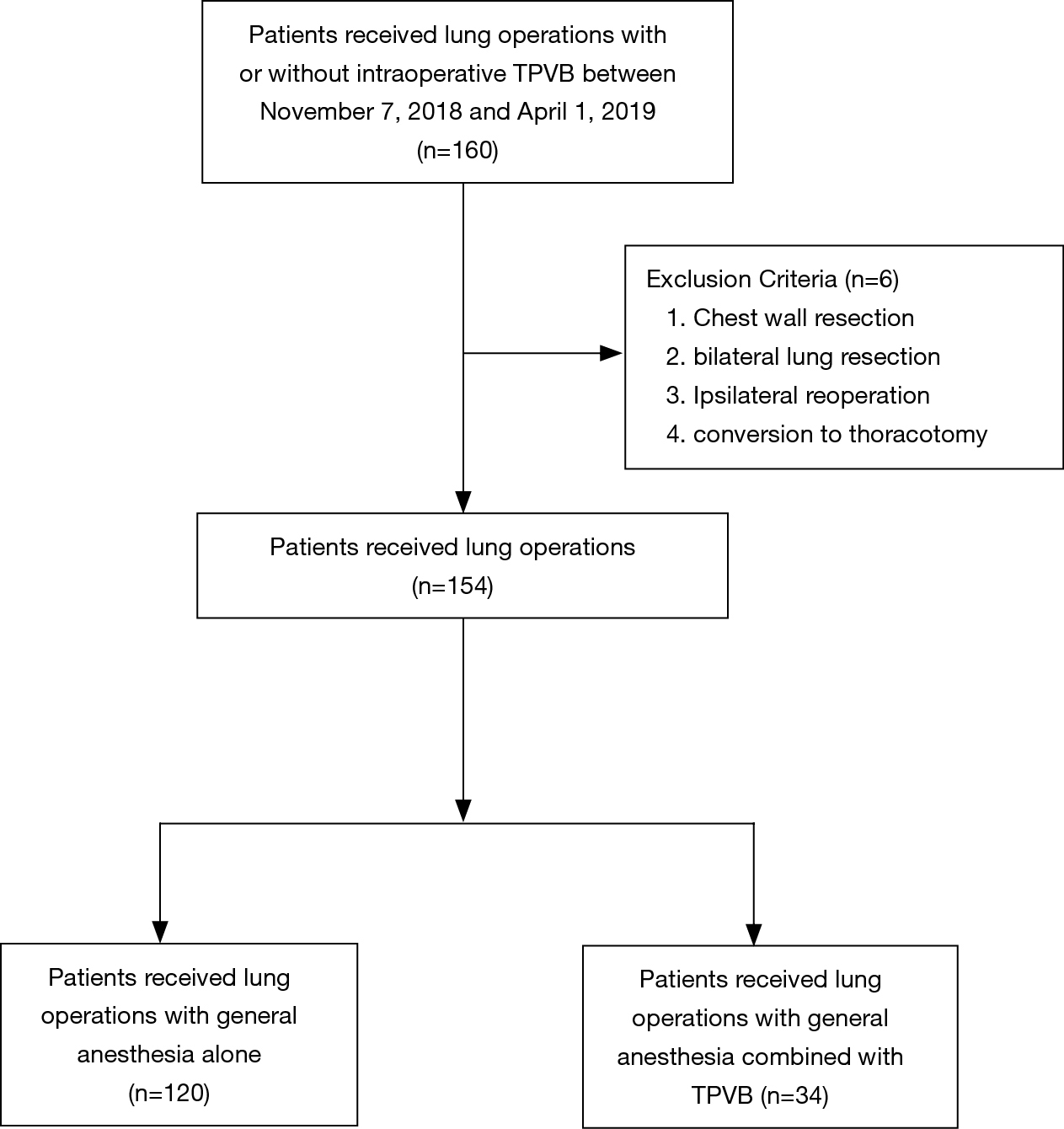 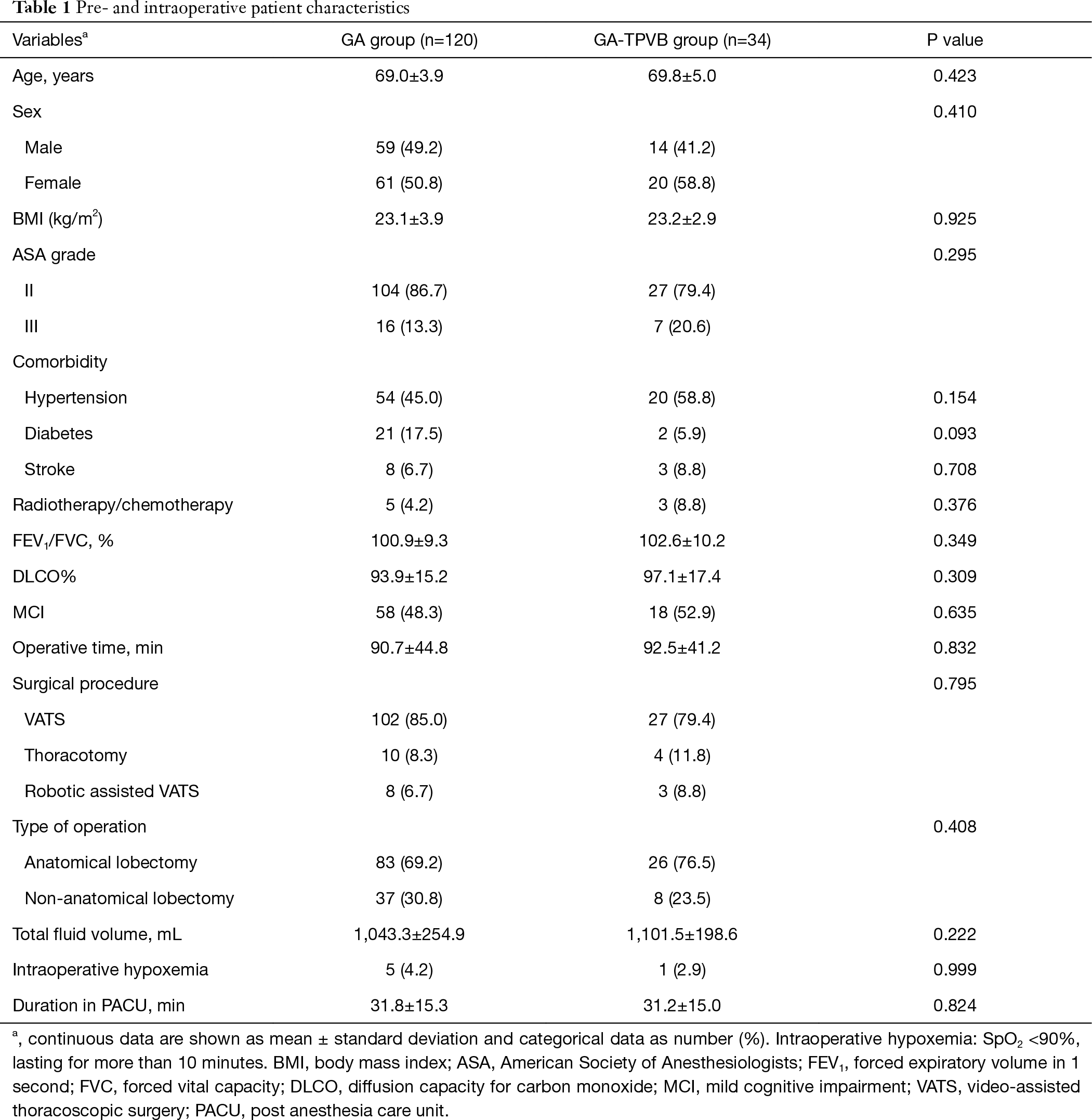 Compared with GA, GA-TPVB could reduce the incidence of PPCs (25% vs. 9%, P=0.042), mostly reduce postoperative atelectasis (19% vs. 3%, P=0.021). TPVB could reduce the rate of required analgesia in PACU, PCA pressing frequency in 24 h and chest tube duration. However, there were no significant differences on the rate of cardiovascular and other complications, ICU stay and LOS between the two groups (P>0.05) (Table 2). 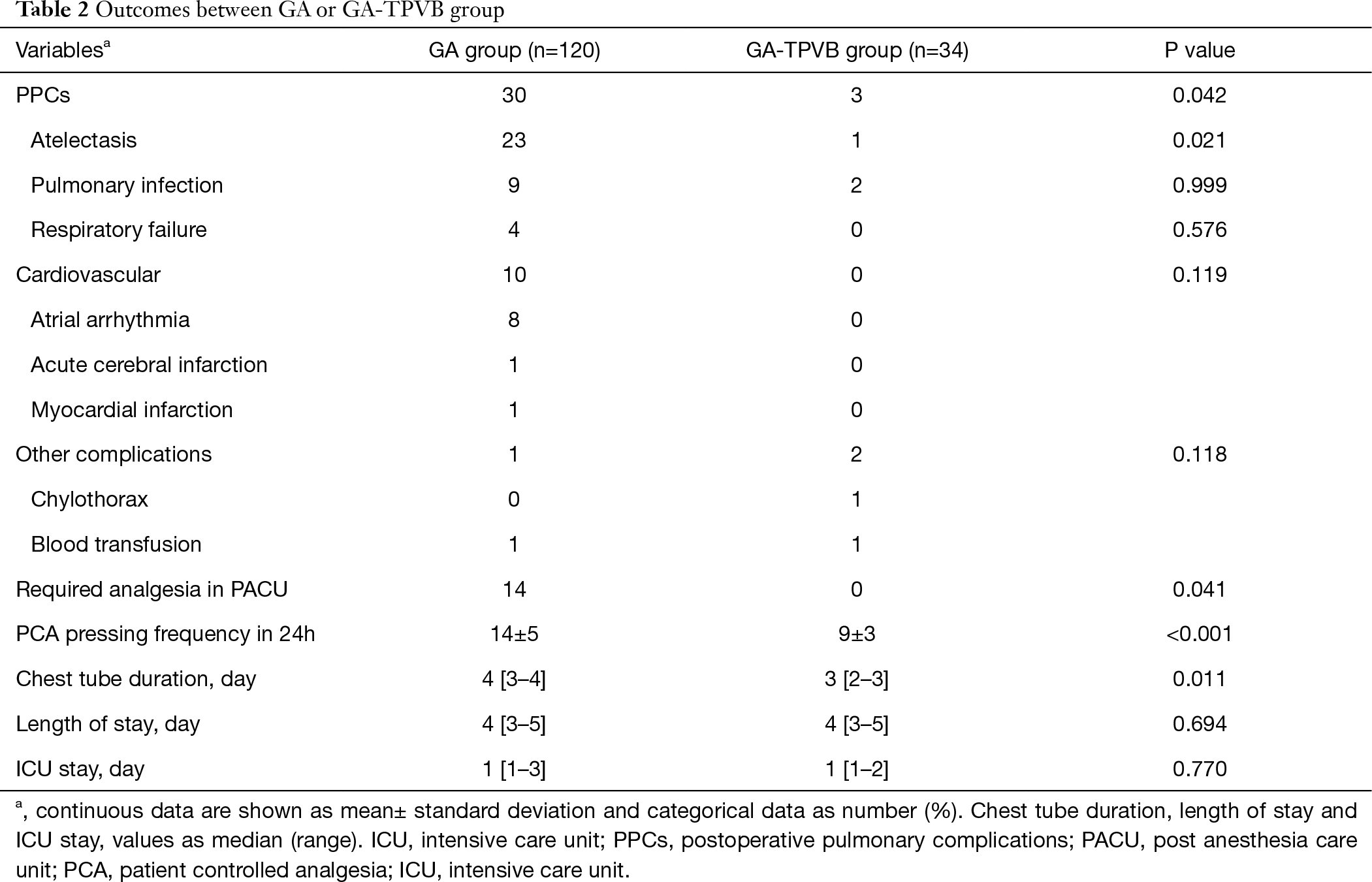 Univariate and multivariate analysis of potential risk factors for PPCs 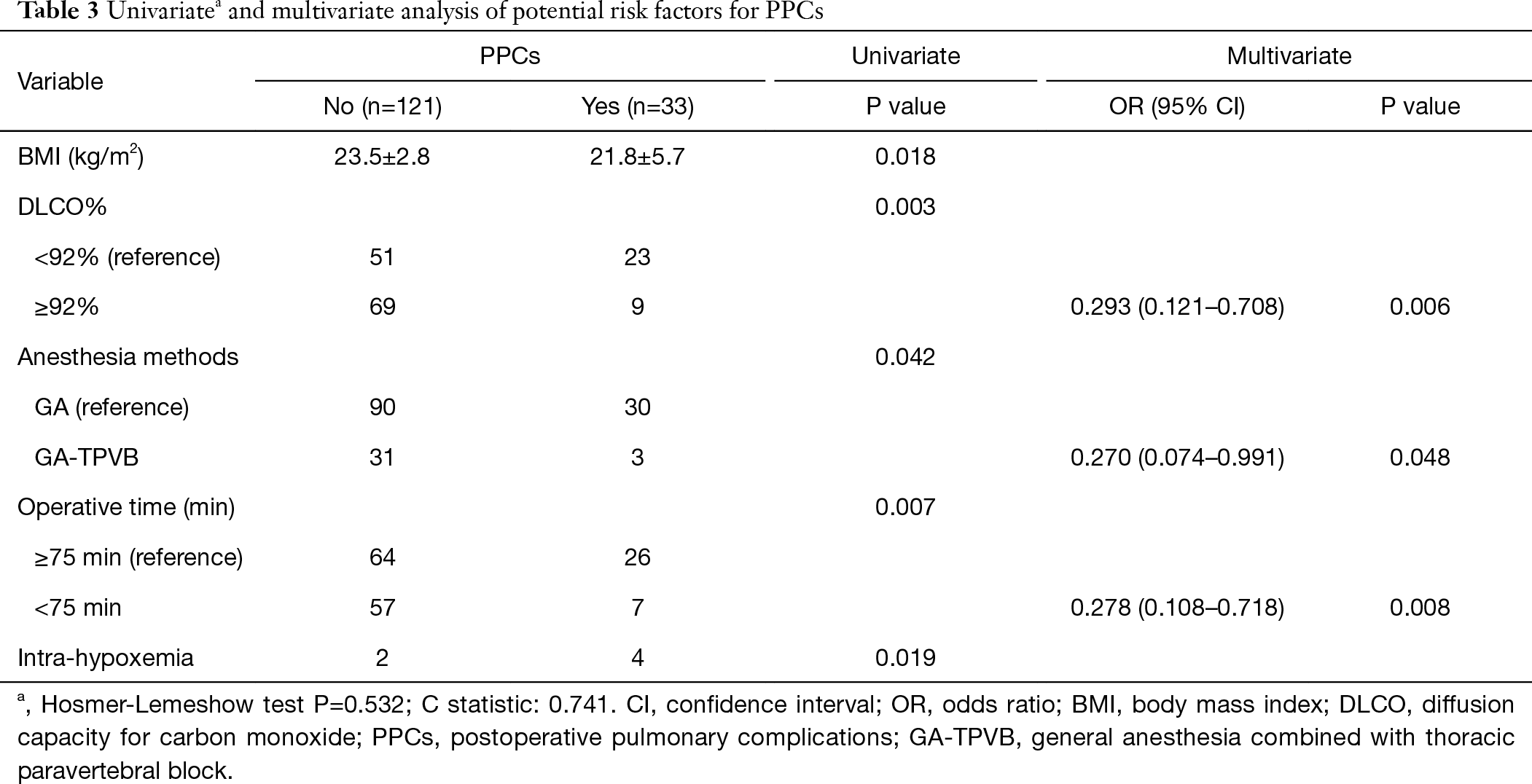 Our study showed that GA-TPVB in geriatric patients undergoing thoracic surgery was associated with fewer PPCs compared with GA. TPVB could reduce the rate of required analgesia in PACU, PCA pressing frequency in 24 h and chest tube duration. However, based on the data of this study, the effects of GA-TPVB on cardiovascular and other complications, ICU stay and LOS cannot be obtained. Perioperative TPVB use may help to provide interventions for patients at greatest risk of major adverse outcomes after surgery, so interventions can be targeted to those most likely to benefit.

That about 21.4% (33/154) geriatric patients scheduled for thoracic surgery have probable PPCs is not surprising given the same prevalence of PPCs in other clinical studies (5,6). For instance, depending upon definition of PPCs and type of surgery, the prevalence of PPCs ranges from 9% to 40% (15-18). The definition of PPCs in this study is based on the European Perioperative Clinical Outcome definition (14), which is determined by experienced anesthesiologists and surgeons with relative reliability. Moreover, TPVB is performed by experienced anesthesiologists under the guidance of ultrasound, which could ensure the effectiveness and safety of postoperative analgesia. Furthermore, this study is not limited to one type of thoracic surgery (including VATS/thoracotomy/robotic assisted VATS), so our study is applicable to a wider range of elderly patients undergoing elective thoracic surgery.

In our study, TPVB could reduce the rate of required analgesia in PACU, PCA pressing frequency in 24 h and chest tube duration. The mechanism probably by which GA-TPVB reduces the incidence of PPCs may be to provide stable and long-lasting pain control after surgery to promote recovery of lung function (7,11). While poor pain control after surgery which do not allow the patients to take deep breath and ultimately lead to atelectasis and retention of secretions (7,19,20).

Protective lung ventilation (PLV) during one-lung ventilation (OLV) for thoracic surgery is frequently recommended to reduce pulmonary complications (21). However, the effect of anesthesia methods on PPCs has been controversial, especially in regional anesthesia. Powell et al. (22) compared the effects of TPVB and epidural blockade on postoperative adverse outcomes after pneumonectomy and concluded that the increased incidence of major PPCs was associated with thoracic epidural block, but did not prolong the hospital length of day. A retrospective propensity score-matched study by Blackshaw et al. (23) found that TPVB did not reduce the incidence of PPCs, other postoperative complications, morbidity and mortality and prolong postoperative hospital stay compared with epidural block in open lung resection which were consistent with randomised controlled trials and systematic reviews (24,25). Thoracic epidural analgesia was associated with reduced PPCs and mortality in patients with severe COPD compared with systemic analgesia (13). Therefore, we infer that TPVB use in geriatric patients could reduce PPCs after surgery compared with general anesthesia alone, and the results of this study also confirm this. There were no significant differences in rates of other postoperative complications, ICU stay and LOS based on this study.

This study also has certain limitations. It has the same bias as any secondary analysis of data. Also, we were unable to directly compare analgesic efficacy due to incomplete data. Finally, since the patients were not randomized into receiving GA or GA + TPVB. The biases introduced by this decision may have an impact on PPCs.

The authors would like to thank the nurse anesthetists in the operating room of the Shanghai Chest Hospital, Shanghai, People’ republic of China, for their involvement and support.

Ethical Statement: The authors are accountable for all aspects of the work in ensuring that questions related to the accuracy or integrity of any part of the work are appropriately investigated and resolved. This study was approved by the Institutional Review Board (KS1862) of Shanghai Jiao tong University Shanghai Chest Hospital with the consent of the patient or family member and signed informed consent.