Lung cancer is the leading cause of cancer death in the world. In the Middle East and North Africa (MENA) region, lung cancer is a major health problem and ranked in the top cancer sites in many countries in the region (1,2).

Establishing accurate pathological diagnosis is the first step of the proper management of lung cancer. This diagnosis is important for the disease management especially the selection of systemic therapy in the metastatic setting.

Knowing the histology subtype of non-small cell lung cancer is still relevant and the first step to avoid harmful treatment, such as the use of bevacizumab in squamous cell cancer, or the use of less effective treatment, such as pemetrexed in squamous histology subtype (3). This requires performing immunohistochemistry for markers to differentiate squamous form non-squamous (TTF, Napsin, P63) (4).

Furthermore, each major subtype of lung cancer harbors different actionable mutations with most of them present in non-squamous histology. This will dictate further laboratory workup based on prevailing practice (5). Staining for PDL1 has become recently a requirement to determine if the patient is candidate for first line immune therapy treatment (6). Another important utilization of the biopsy in the early phase of the patient management is staging by documenting the involvement of lymph node or an organ that may upstage the disease.

In summary, the biopsy must be adequate by having enough tissue material to discern the subtype of lung cancer and enable performing molecular studies to identify actionable targets. Therefore, selecting the type of the procedure to obtain the initial biopsy is critical to confirm diagnosis early on and avoid repeating biopsy with increasing risk of complications and delay of treatment initiation. Many procedures that are commonly used in diagnosing lung cancer includes: fiberoptic bronchoscopy with or without transbronchial needle aspiration (TBNA), endobronchial ultrasonography (EBUS), image guided transthoracic needle aspiration, mediastinoscopy, pleural fluid analysis (thoracentesis) and thoracoscopy, and surgical approaches (7).

The selection of the procedure depends on the patient condition, disease status and available expertise and equipment (8). Nevertheless, whatever is the approach used, if the biopsy is not adequate as mentioned earlier, repeating the biopsy will be indicated using similar or different approach. Therefore, the team managing lung cancer patients at the diagnosis phase should be familiar with the yield of each technique and associated risks-benefits.

In this manuscript, we are reporting the initial work-up approaches to obtain tissue diagnosis for lung cancer in the Middle East and North Africa Region.

Data of consecutive patients with non-small cell lung cancer were collected retrospectively from participating centers in different countries in the MENA Region. Methods of obtaining tissue and workup were analyzed to determine the yield of each methods and challenges encountered.

All consecutive NSCLC cases during the study period of January 2013 to January 2014 were included.

Ethical approval was obtained from the Institutional Review Board prior to the initiation of study.

Patient and disease characteristics, type of procedures were calculated as counts and proportion for categorical variables and continuous variables were reported as a mean and standard deviation. Percentage of patients who underwent one, two and three or more attempts were calculated with type of procedures. Chi-square tests used to evaluate any correlation between certain demographic and clinical features and the number of biopsy attempts.

Data on methods of obtaining tissue and the yield in each attempt is depicted in Table 2. 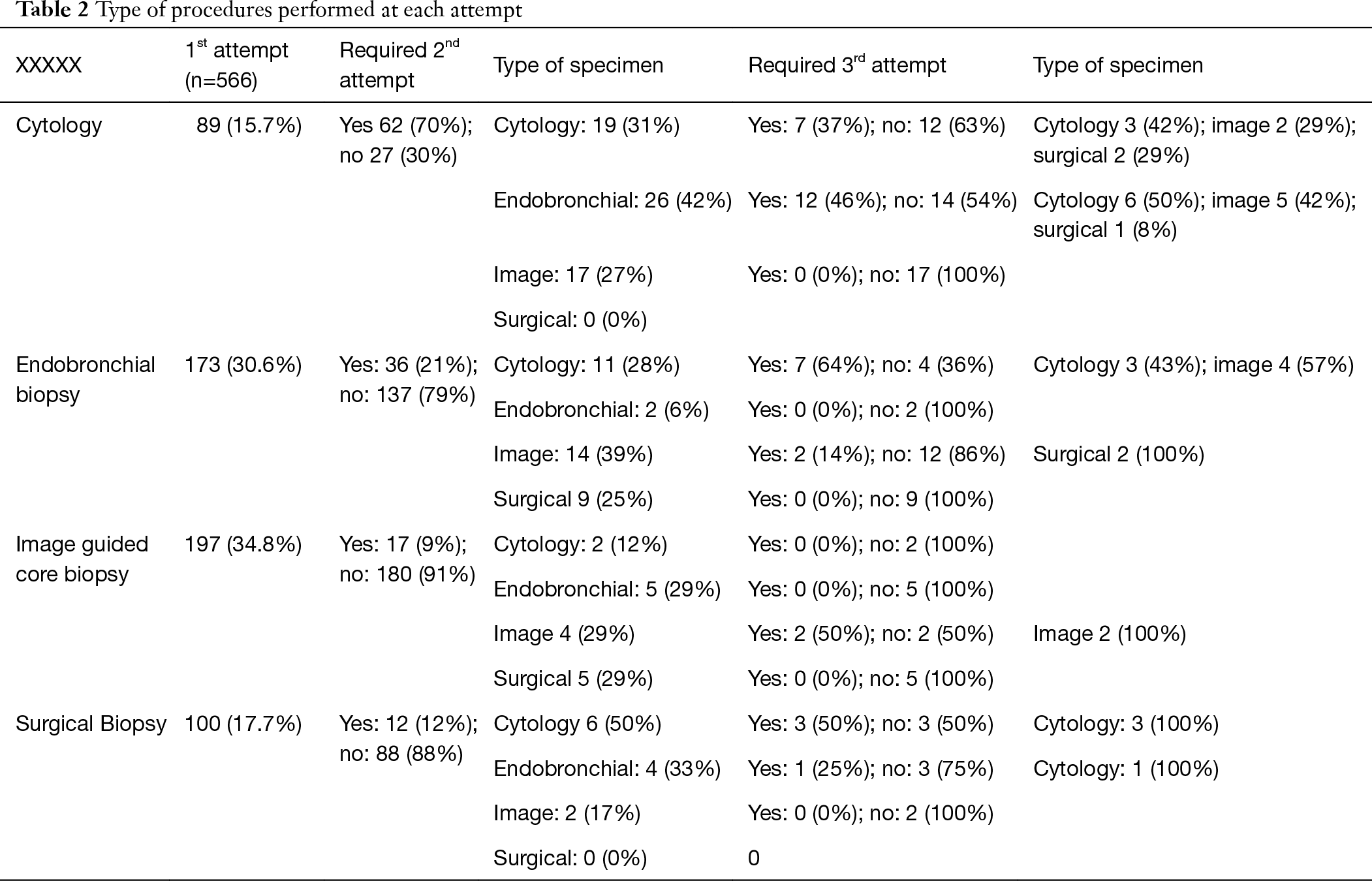 Table 2 Type of procedures performed at each attempt
Full table 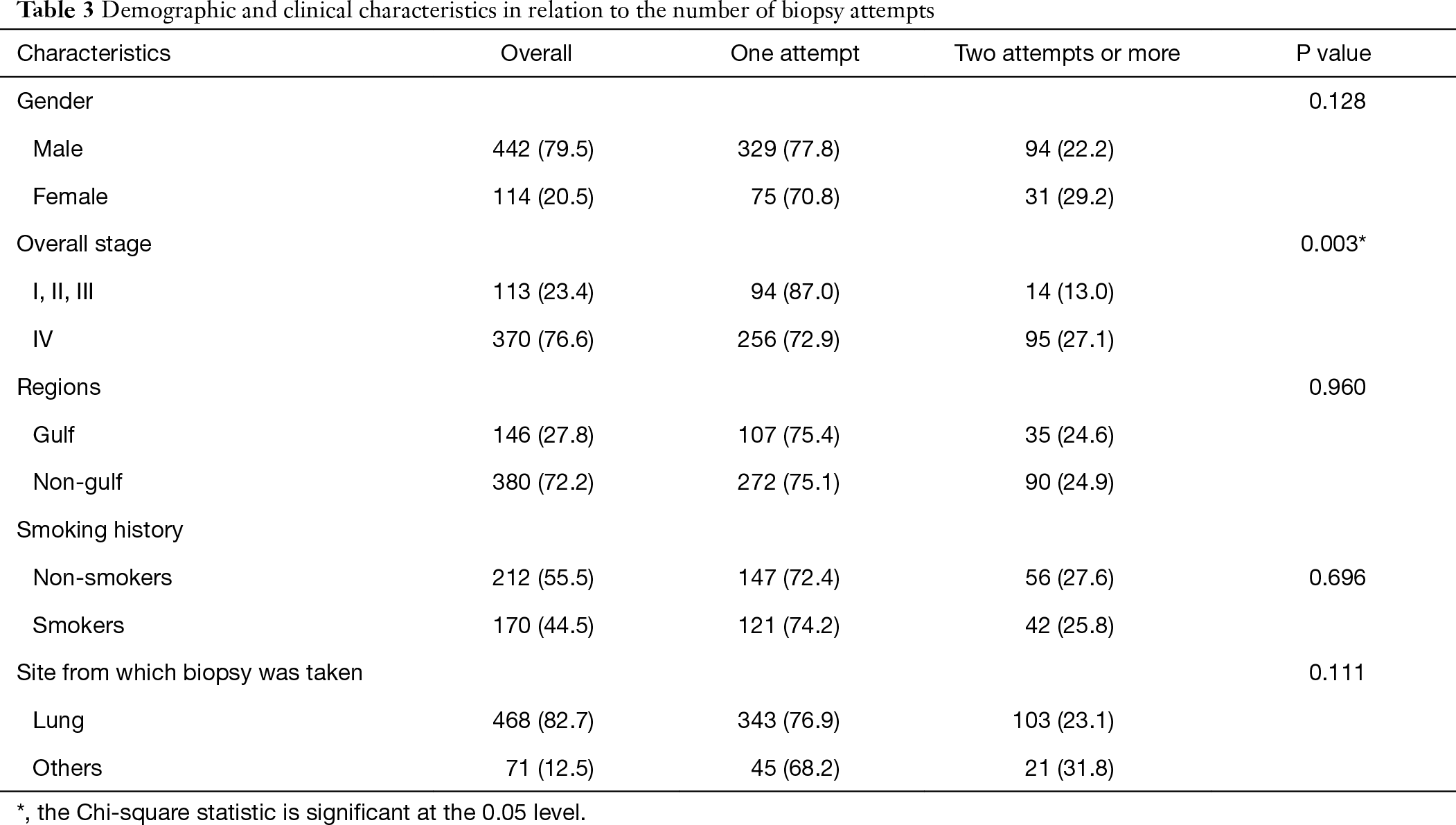 Our study showed that majority of lung cancer cases are diagnosed from the first attempt, but fraction of the patient requires repeated attempt of biopsy using different approaches. The best yield is with image guided biopsy and the least is in cytology which consistent with the literature (9). The yield of our initial biopsy was similar to the reports in the literature with repeat rate varies based on the procedures used (10-13).

The need to repeat the biopsy was more common in stage 4 than earlier stages which can be due to the use of better diagnostic approached such as image guided biopsy or surgery in earlier stages and the use of cytology in the advanced stages.

There are different approaches to improve the yield of the biopsy and avoid delay in diagnoses and increase risk of complications (Table 4). Involvement of multidisciplinary team (MDT) in the decision making to choose the best approach and site of biopsy is a must nowadays. The team should include interventional radiologist, interventional pulmonologist or gastroenterologist to be able to access hard to reach lesions or lymph nodes. The team should select the procedure based on the highest possible yield balanced with associated risk (14). Our study did not evaluate the involvement of MDT in the decision making. It is known that multidisciplinary team approaches need to be enhanced in our region to improve patient care (15-17).

Our study did not evaluate definite reason for the inadequate biopsy and how the decision was made in the first place to select the procedure, but we recommend each center to perform root cause analysis for failures and implement intervention to reduce the rate of re-biopsy. This should be part of quality assurance plan for the whole process. Table 4 highlights some of these approaches. Incorporating these approaches into practice may require resources and expertise to be addressed individually as one-size-fits-all recommendations will not work.

Other methods to enhance the yield of the biopsy is implementing evidence-based guidelines adapted to the local setting (18).

The use of PET scan may help identify the active disease from collapsed normal lung tissue or benign lesions, or may detect more accessible lesion that was not described with other imaging modalities (19-21).

As reported earlier on our study population, molecular studies were not performed due to inadequate specimen in 11.6% of the patients (22). Therefore, having a tissue management plan and use the more advanced techniques such as NextGen Sequencing (NGS) will help conserve tissue from small specimens (23). After confirming diagnosis of lung cancer, molecular studies can be done on liquid biopsy and avoid the need of re-biopsy in certain cases (24).

Having Rapid On-Site-Evaluation (ROSE) will determine at procedure site if adequate tissue is obtained to avoid redoing the biopsy (25,26).

In conclusion, selecting the initial procedure to obtain tissue diagnosis should be done carefully and proper pathological workup should minimize the need for exposing the patients for re-biopsy.

Ethical Statement: The authors are accountable for all aspects of the work in ensuring that questions related to the accuracy or integrity of any part of the work are appropriately investigated and resolved. Approved by the IRB Committee of the King Abdullah International Medical Research Center on January 14, 2014 under the research retrospective study proposal “RC 13/194 - The Study of Druggable Molecular Abnormalities in Non-Squamous Non-Small Cell Lung Cancer in the Middle East”.