Acute respiratory distress syndrome (ARDS) is an inflammatory condition of the lungs characterized by acute hypoxemic respiratory failure and non-cardiogenic pulmonary edema (1). This is typically caused by direct lung injury (e.g., pneumonia); however, it can also be the result of indirect injury as well (e.g., non-pulmonary sepsis). ARDS is associated with significant mortality (1-3). Severity is graded using the arterial to inspired oxygen ratio (PF ratio) and can prognosticate survival and ventilator-free days (1-3). Those that survive are often left with significant reductions in functional capacity (4).

In addition to the primary insult (direct or indirect), lung injury can be worsened by secondary iatrogenic lung injury, also known as ventilator-induced lung injury (VILI) (5). VILI can be the result of a variety of mechanisms of injury, including barotrauma (excessive pressure during ventilation leading to pneumothoraces), volutrauma (excessive tidal volumes), and atelectrauma (inadequate positive end expiratory pressure, PEEP). These types of VILI can all lead to biotrauma, which results in an increase in inflammatory cytokines and is a potential mechanism of extra-pulmonary organ failure. Several strategies to mitigate VILI have demonstrated an ability to improve outcomes in patients with ARDS including pressure and volume limited lung protective ventilation, prone positioning, and a restrictive fluid strategy (6-8). Pharmacological neuromuscular blockade (NMB) has previously been demonstrated to improve outcomes in patients with ARDS (ACURASYS trial); however, a recent large multicenter randomized control trial (ROSE trial) with discordant results has thrown this into question (9,10). In this editorial, we review the previous studies supporting the use of NMBs, potential mechanisms of actions, the risks of use, and possible reasons for the discordant findings of the recent ROSE trial.

There are several putative mechanisms through which NMB may exert a clinical benefit to patients with ARDS. Neuromuscular blocking agents have been demonstrated to exert an anti-inflammatory effect and reduce proinflammatory cytokines in both serum and broncho-alveolar lavage (BAL) fluid (11). This could potentially reduce biotrauma and subsequent multiple organ failure. From a ventilator mechanics standpoint, NMB may also reduce VILI. This may be through several mechanisms including prevention of active inspiration and reduced visco-elastic chest wall stress leading to lower plateau pressures and end-inspiratory transpulmonary pressures. This in turn will result in reduced driving pressure (plateau pressure—PEEP) (12). In addition, NMB may also reduce the respiratory rate, which is a determinant of mechanical power and the energy delivered to the patient per minute. Increased mechanical power has been associated with reduced survival; however, prospective studies still need to determine if modifying mechanical power will lead to improved outcomes (3,13,14). NMB may also result in less dyssynchrony, (mistiming of ventilator breaths with a patient’s breath) and in particular reverse triggering, which is associated with reduced survival (15,16).

Initial studies supporting the use of NMBs

The first clinical randomized control trial with NMBs for ARDS [American-European Consensus Conference (AECC) definition] examined the effect of 48 hours of cisatracurium on the primary outcome of oxygenation 120 hours following randomization (17). This study included a total of 56 patients from four intensive care units (ICUs). There was a significant improvement in oxygenation 48–120 hours post-randomization. In addition, there was a significant reduction in plateau pressure.

Following this study, the same group conducted another randomized control trial with 36 patients with ARDS. Patients either received placebo or NMB and the investigators examined the effect on cytokine production in both blood serum and BAL fluid (11). This study demonstrated a reduction in interleukin (IL)-6 and IL-8 in blood serum as well as a reduction in BAL fluid IL-8 in the NMB agents study arm. This study also reproduced the finding from the previous study, demonstrating an improvement in PF ratio 48 hours following the initiation of NMB.

The ACURASYS trial was conducted in 20 ICUs in France from March 2006 to March 2008 (10). The population included in this study were mechanically ventilated patients with acute hypoxemic respiratory failure and features consistent with moderate to severe ARDS (PF ratio ≤150 mmHg with bilateral infiltrates consistent with edema and absence of elevated left atrial pressure). Patients were randomized to receive either deep sedation (control group) or deep sedation and NMB with cisatracurium (intervention group). Those patients who received the intervention received a bolus dose of cisatracurium (15 mg) followed by an infusion for 48 hours (37.5 mg/hour). Intervention group patients were also eligible to receive a bolus of cisatracurium 20 mg if the plateau pressure was ≥32 cmH2O. The PEEP was titrated according to the PEEP table in the ARMA low tidal volume ventilation trial (6). The tidal volume delivered was 6–8 mL/kg predicted body weight and the fraction of inspired oxygen therapy (FiO2) targeted a peripheral oxygen saturation of SpO2 of 88–95%. The primary outcome was 90-day mortality adjusted for severity of illness (SAPS-2), plateau pressure, and PF ratio.

Baseline characteristics were evenly matched in both the control and the intervention group, except for the PF ratio, which was lower in the NMB arm (106 intervention vs. 115 control arm).

The ROSE trial was conducted in 48 hospitals within the Prevention and Early Treatment of Acute Lung Injury (PETAL) network (9). The population was similar to the ACURASYS trial and included patients with moderate-severe ARDS (PF ratio ≤150 mmHg on a PEEP of 8 cmH2O or higher). Unlike the ACURASYS trial, however patients were randomized to either light sedation (control arm) or deep sedation and NMB (intervention arm). The same NMB agent (cisatracurium) and dosing regimen as in the ACURASYS study was used (15 mg bolus followed by a 37.5 mg/hour infusion for 48 hours). Patients were mechanically ventilated using a low tidal volume, high PEEP and conservative fluid management strategy. The primary endpoint was in-hospital death at 90 days without any adjustment.

A total of 1006 patients were enrolled in the ROSE trial. Baseline characteristics were evenly matched between the control and the intervention arm.

Reasons for the discordance 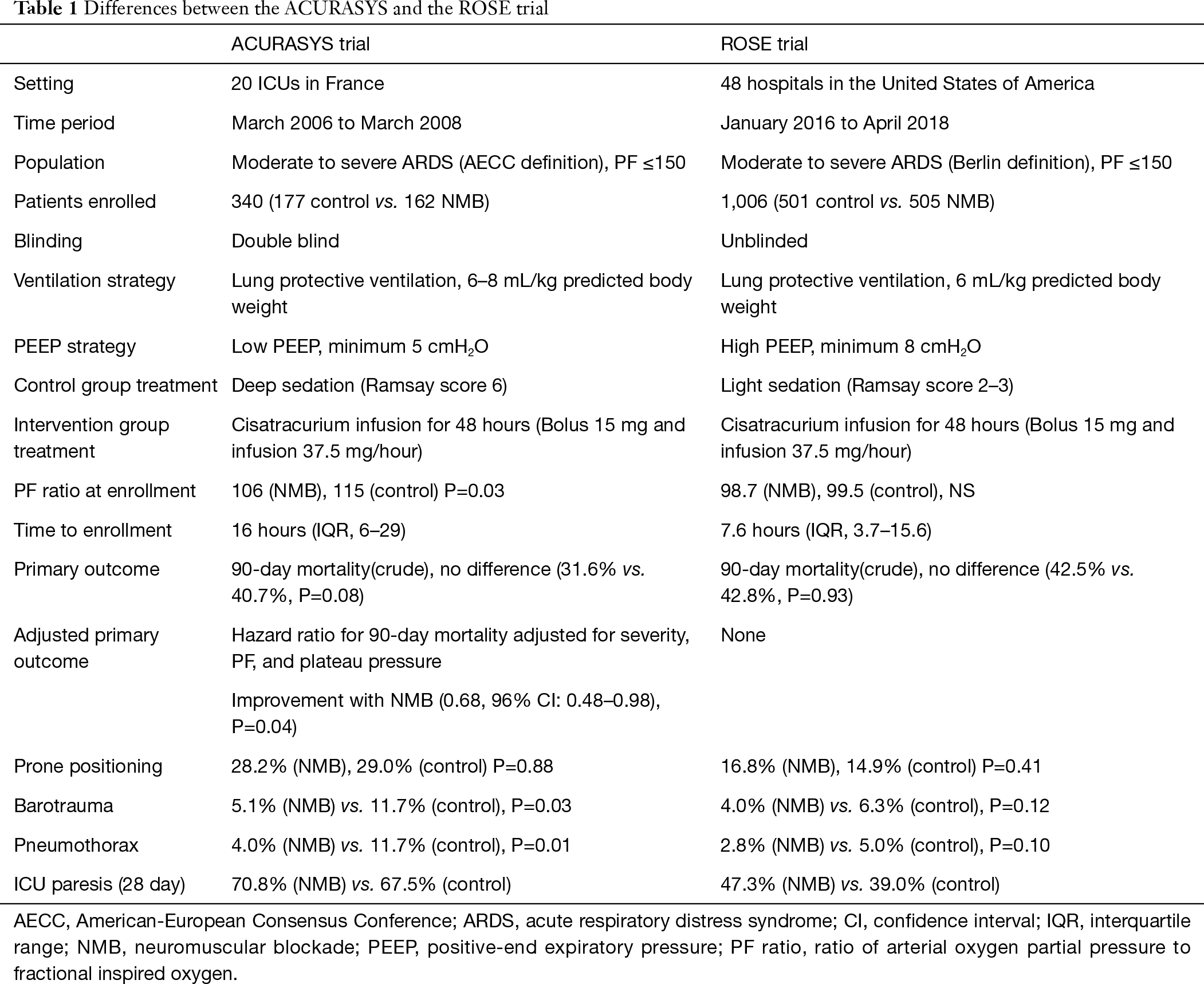 First, there were a large number of patients screened but excluded from the ROSE trial. This was due to the fact that many of these patients either improved their PF ratio prior to enrollment (658 patients) or receiving a continuous NMB agent (655 patients). More patients were excluded for either of these two reasons than were recruited to either the control or intervention group. In contrast, in the ACURASYS trial, very few patients were not enrolled due to previous NMB (42 patients). This highlights a potential selection bias in that patients who were perceived to benefit from NMB may have been excluded from the trial. The authors of the ROSE trial address this issue by conducting a sensitivity analysis comparing centers with high exclusion due to NMB with low exclusion centers and demonstrated no difference.

Secondly, the patients’ time to enrollment was much shorter in the ROSE trial when compared with the ACURASYS trial (16 vs. 7.6 hours). This may have resulted in patients being included in the study who might have otherwise improved anyways or died before being recruited.

Third, the rates of prone positioning were much lower in the ROSE trial than the previous ACURASYS trial. The rates of proning were lower than those reported in the APRONET study, however similar to those seen in the LUNG SAFE study (2,18). The authors did not stratify or conduct a subgroup analysis of the outcomes of patients who were proned. The overall mortality in the control and intervention groups was much higher in the ROSE trial when compared to the ACURASYS trial and may be related to the lower relative rates of prone positioning

Lastly, and perhaps most importantly, is the difference in sedation goals for the control groups between the studies. Ventilator dyssynchrony due to reverse triggering (leading to breath stacking, high tidal volumes and worsening VILI) is increased with deep sedation and has previously been associated with worse outcomes (15,16,19,20). In the ACURASYS trial the control group was deeply sedated, which may have led to increased VILI and morality, whereas the treatment group had a survival benefit related to NMB protecting from reverse triggering. In the ROSE trial, lighter sedation in the control group may have result in less reverse triggering events reducing VILI and attenuating the protentional additive benefits of NMB and deep sedation.

Risks to the use of NMBs

Both the ACURASYS and ROSE studies provided an opportunity to examine the long-term risks with the usage of NMB agents. There were no between-group differences in rates of ICU-acquired weakness; however, mean levels of physical activity to day 6 were higher in the ROSE trial control arm and there were more serious cardiovascular adverse events relating to use of cisatracurium in the intervention group (14 vs. 4 events; P=0.02).

Although two large randomized control studies have examined the potential utility of NMB use in patients with moderate-severe ARDS, more questions than answers remain. The ROSE study makes a compelling case against the use of continuous NMB early in moderate-severe ARDS; however, due to the number of patients excluded in the screening, many clinicians still provide or see potential value in using NMB in alternate fashions. Based on the results of the ROSE trial, we caution clinicians on the use of continuous NMB in early ARDS for all patients indiscriminately; however, there still remains strong biological and physiological plausibility for their use under the right circumstances to ensure a personalized and customized approach. We argue that NMB use in ARDS is likely to help physiological goals and improve ventilator and pulmonary mechanics; however, this hypothesis should be tested in large scale prospective studies. Potential questions to be addressed in future ARDS research include: Does NMB use reduce dyssynchronous events and/or reduce driving pressure? Is NMB essential for prone positioning? Is deep sedation equivalent to NMB? Is there a role for bolus dosing of NMB particularly to target dyssynchronous events? Further studies will be needed to answer these questions and others.