Heterogeneity of perception of symptoms in patients with asthma

In a population-based survey of patients with asthma, the symptom rates were 7.8% for wheezing, 6.6% for cough, 6% for chest tightness, and 3.6% for dyspnea or shortness of breath (1). In Japan, cough is prominent, and the incidence of cough-dominant or cough-variant asthma is high (2). A preliminary evaluation in our clinic also showed that cough and dyspnea were cardinal symptoms in patients with bronchial asthma, and that patients subjectively evaluated the disease activity mainly through their perception of these symptoms (3). Recent evaluations using the asthma control questionnaire (ACQ) (4) and asthma control test (ACT) (5) suggest that these symptoms are pivotal in judgment of asthma control. However, defective perception of dyspnea in a patient with bronchial asthma has also been pointed out, and this may lead to under-treatment and result in greater morbidity and mortality from asthma (6).

In the real clinical setting, many patients discontinue use of inhaled corticosteroids (ICS) or ICS/long-acting beta2 agonist (LABA) treatment after symptoms diminish or disappear, even if physicians explain the future risk (3). Furthermore, we are always concerned whether the perception of symptoms is reliable. A visual analogue scale (VAS) is a useful tool to quantify the severity of symptoms in adults or children with bronchial asthma (7,8). In this study, we evaluated whether perception of symptoms, in particular cough and dyspnea, in patients with bronchial asthma before and after ICS/LABA treatment are similar and can be used to judge the status of asthma control. We also examined the relationships of perceived symptoms with pulmonary function.

The subjects were patients who were diagnosed with bronchial asthma who made their first visit to our clinic in August 2014 to July 2015 and were treatment-naive or had not taken ICS, short-acting β2 agonists (SABAs) or LABAs for at least 3 months before the first evaluation. VAS scores for cough and dyspnea and spirometry data were obtained at the first visit (baseline). The patients were asked to visit as soon as possible after 1-month ICS/LABA treatment (fluticasone propionate/salmeterol at 250/50 µg twice a day or budesonide/formoterol at 160/4.5 µg twice a day) for a second evaluation of VAS and spirometry. Patients whose second visit was more than 3 months from the baseline evaluation were excluded from the study.

The VAS scale is a horizontal line (100 mm) labeled with “no symptom” on the left (0 mm) to “most extreme symptom ever experienced” on the right (100 mm). The patient was asked to indicate scores for cough and dyspnea perceived in one week prior to the baseline evaluation or since the symptoms appeared in cases with symptoms lasting less than 1 week before the evaluation. At the evaluation after treatment, VAS scores were obtained for the 1 week before the evaluation. The patients did not know the results of spirometry before completing the VAS scores.

Spirometry was conducted with a Microspiro HI-801 (Nihon Koden-Chest Inc., Japan) following instructions in the ATS/ERS guidelines, and the highest FVC, VC, FEV1, and FEV1/FVC ratio were taken (9). For FEV1, VC, FVC, and FEV1/FVC ratio, the spirometric reference values were calculated from equations using the LMS methods for Japanese patients (10). The peak expiratory flow (PEF), forced expiratory flow at 50% of vital capacity expired (FEF50), forced expiratory flow at 75% of vital capacity expired (FEF75), and forced expiratory flow between 25% and 75% of VC (FEF25-75) were measured. These parameters are presented as absolute values and percent predicted values (%predicted) (11,12). A significant bronchodilating response was defined as an increase in FEV1 of >12% and >200 mL after 1-month ICS/LABA treatment compared with the baseline evaluation (13). Patients with and without this response were defined as responders and nonresponders, respectively.

Linear regression analysis was used to evaluate the perception of symptoms between responders and nonresponders (14-19). The slope (ΔVAS score/ΔFEV1) was calculated using the change of FEV1 expressed as a percentage of the initial value (independent variable, X-axis) and the absolute change in each VAS score (dependent variable, Y-axis). This slope indicates perception of cough or dyspnea for each group, and not for individuals of each group. All patients provided informed consent and the study was approved by the institutional review board.

Quantitative variables are shown as medians with an interquartile range (IQR). Correlation coefficients between VAS scores and absolute values of lung function tests at each evaluation and between changes of VAS scores and changes of spirometric parameters were evaluated using the nonparametric Spearman method. VAS scores for cough and dyspnea and spirometric parameters were compared between responders and nonresponders by nonparametric paired t-test. All analyses were performed using Graphpad Prism ver. 6 (Graphpad Software, Inc, San Diego, CA, USA), with P<0.05 considered to indicate a significant difference.

Of 1,325 potential subjects, 548 patients were enrolled in the study using the selection criteria. The incidences of respiratory symptoms at the initial evaluation (baseline) were cough 87.9%; dyspnea 42.0%; phlegm 34.0%; wheezing 6.7%; and chest tightness 2.4%. Cough was prominent in our study population, consistent with our preliminary study and other studies in Japanese subjects (2). The incidence of wheezing was low, as we have previously noted (9). All patients had mild to moderate bronchial asthma (20). There were 146 bronchodilating responders (26.6%) and 402 nonresponders (73.4%) among the 548 patients. The characteristics of the two groups are shown in Table 1.

Comparison between VAS scores for cough and dyspnea

Comparison of responders and nonresponders

Next, we evaluated the relationships of VAS scores for symptoms with pulmonary function parameters (Table 2). 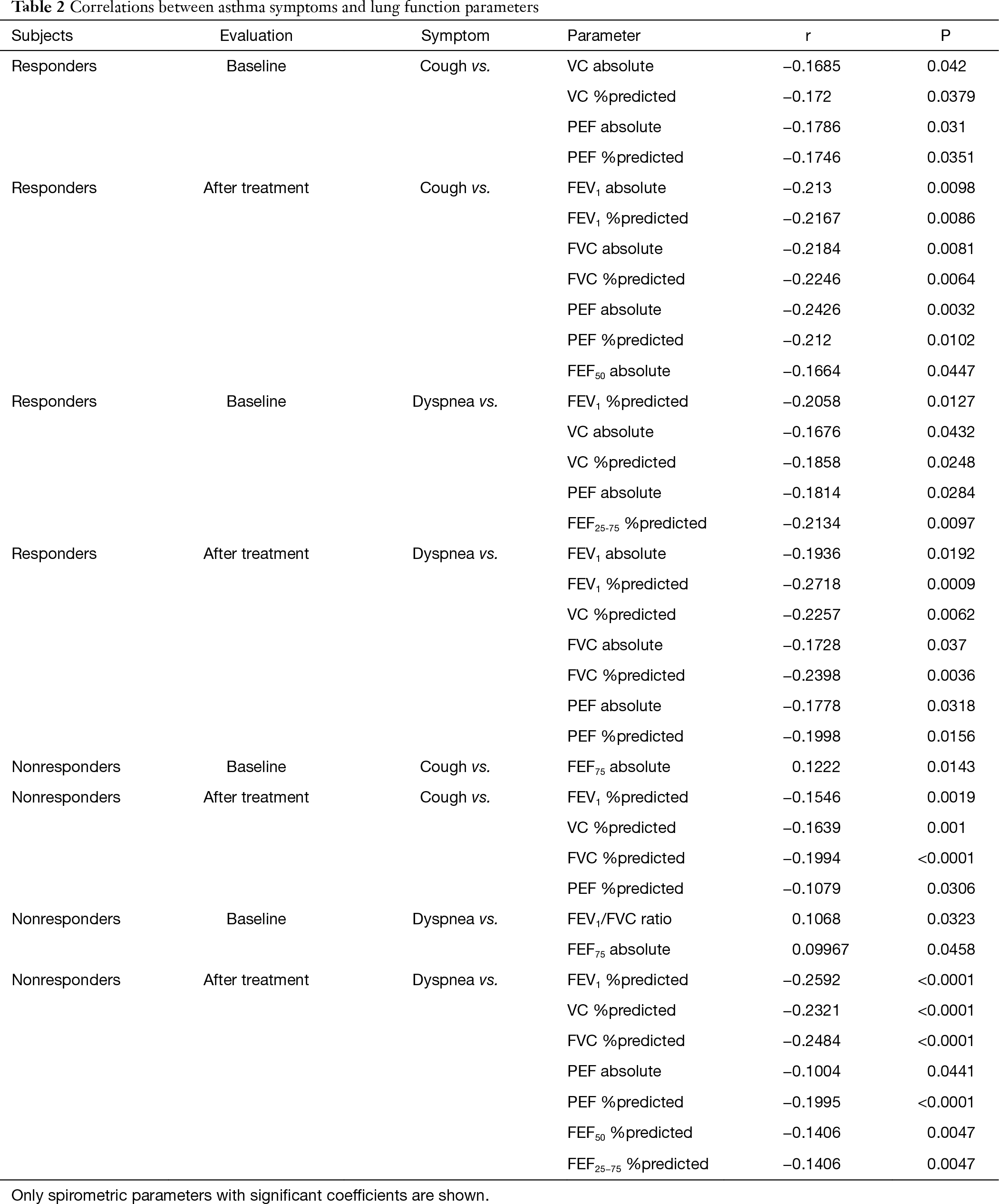 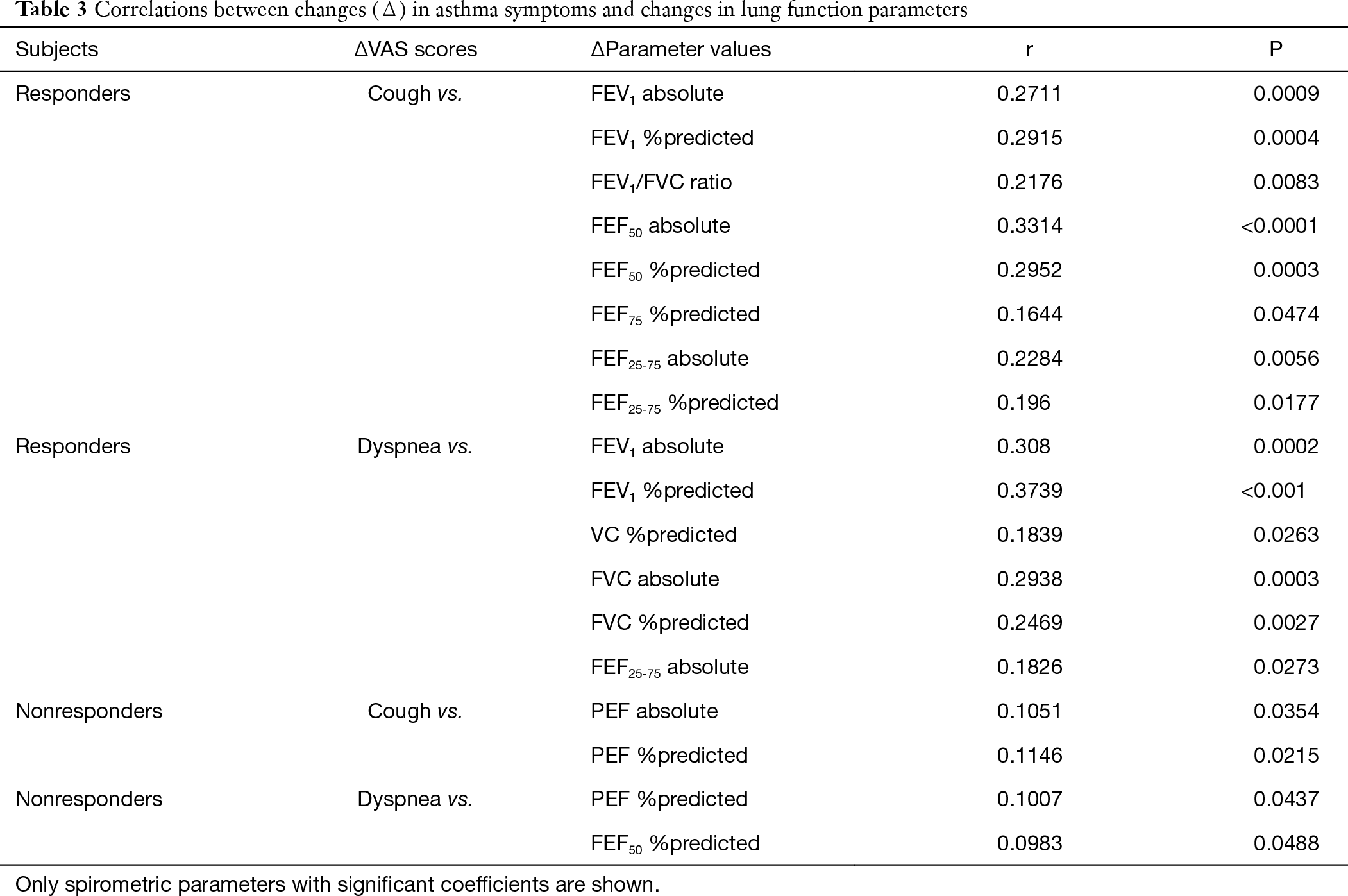 There will be skeptics about nonresponders, based on the opinion that patients with bronchial asthma are necessary to demonstrate a significant change in airway obstruction either spontaneously or following the treatment. In fact, 402 patients (73.4%) among 548 nonresponders in this study seemed to show no change in airway obstruction following 1-month ICS/LABA treatment. However, this criticism may be not suitable. First, Yancey et al. indicated the rate of airway reversibility according to the percent predicted FEV1 values from a total of 30,816 patients in 106 clinical trials (21). From their observations, patients with a baseline FEV1 (%predicted) values between ≥40% and >50%, ≥50% and <60%, ≥60% and <70%, ≥70% and <80%, ≥70% and <80%, ≥80% and <90%, ≥90% and <100% showed 42.14%, 34.09%, 27.57%, 22.68%, 19.43%, 18.33% of airway reversibility, respectively. In conclusion, patients with better FEV1 have less airway reversibility. In our study, overall %predicted FEV1 value in total 548 patients were 87% (76% to 97%) [median (25th to 75th IQR), data not shown] and rate of reversibility was 26.6%, not far apart from Yancey’s presentation. Secondly, this study divided the patients into responder and nonresponders. However, nonresponders in this study did not mean having no responsiveness to the treatment. Improvement rate of dyspnea and cough after ICS/LABA therapy in nonresponders was 72.1% and 81.8%, respectively (see in Results). In addition, “true” nonresponders without any improvement of dyspnea or cough after the treatment was only 8.7% in nonresponders with statistically similarity to responders. To explain from a different perspective, 134 (33.3%) of 402 nonresponders did not improve FEV1 after the ICS/LABA treatment (data not shown). Among 134 patients, no improvement of dyspnea or cough was obtained in 41 and 33 patients, respectively (data not shown). Finally, 20 (5.0%) of 134 patients who had no gain in FEV1 after the treatment had no improvement for both dyspnea and cough (data not shown). These observations suggested the nonresponders in our study were sufficiently reactive with the ICS/LABA treatment.

We also evaluated correlations of cough and dyspnea with measurements of pulmonary function. In responders, PEF (absolute, %predicted) was significantly correlated with cough, and FEV1 (%predicted), VC (%predicted) and PEF (absolute) were significantly correlated with dyspnea both before and after treatment. In nonresponders, no spirometric parameter was significant correlated with cough or dyspnea both before and after treatment. Regarding changes in VAS scores from before to after treatment, in responders, ΔFEV1 (absolute, %predicted) and ΔFEF25-75 (absolute) were significantly correlated with ΔVAS for cough and dyspnea. In responders, changes of expiratory volume both at large airway and small airway levels contribute to improvement in perceptions. A change of FEV1 reflects direct bronchodilating responsiveness, and FEF25-75 may be a weak marker of control of asthma (22). Hence, this linkage of symptoms and particular spirometric parameters in responders is of interest and it remained to investigate in future to explain these linkages. In nonresponders, there were correlations of ΔVAS scores for cough or dyspnea with ΔPEF (%predicted). These analyses suggest that both responders and nonresponders have linkages with certain spirometric parameters, but that these differ between the two groups.

We also analyzed perceptions of symptoms using linear regression. These analyses are frequently performed for bronchoconstrictive responses induced with agents such as methacholine, with the slope (ΔVAS score/ΔFEV1) calculated at various concentrations of methacholine inhaled by each patient (14-19). In the current study, an overall slope was calculated for each group, rather than for individuals. The slopes showed that perception of cough was not different between responders and nonresponders, but that of dyspnea did differ. In previous studies using this approach to evaluate responsiveness to bronchoconstrictive stimuli, the perception of dyspnea was less sensitive in patients with severe asthma (14), lower FEV1 (15), high bronchial responsiveness to histamine (15), and moderate to severe airway hyperresponsiveness (AHR) (19); and ICSs enhance perception of airway narrowing (17) and dyspnea (18). It is difficult to compare these studies, which were performed with bronchoconstrictive stimuli, with our study using bronchodilating stimuli, but the perception of dyspnea seems to differ between responders and nonresponders. There are also some limitations in our study, including that the patients may have had a peculiar or ordinary phenotype of adult asthma, and we did not consider symptoms such as phlegm, although all patients had symptoms of dyspnea or cough or both.

We note that the ACQ and ACT are effective for evaluation of asthma control, but perceptions of cough and dyspnea differed between symptoms before and after treatment, and in patients with and without bronchodilating responsiveness to ICS/LABA treatment. In addition, cough and dyspnea were correlated with some spirometric parameters, but without consistency between symptoms or patients with different bronchodilating responses. Therefore, a more precise understanding of each symptom and an independent evaluation of pulmonary function are necessary for more effective management of patients with bronchial asthma.

Cough and dyspnea are often encountered in patients with bronchial asthma, and improvement or deterioration of these symptoms is commonly judged collectively. However, in this study, perceptions of cough and dyspnea were not identical among bronchodilating responders and nonresponders. Spirometric parameters were correlated with the symptoms to some extent, but this was also inconsistent. We would recommend to use VAS scoring with spirometry at the same time or different time to evaluate the vague perception even when a patient is not being treated.

The authors are grateful to Ms. Yuri Kawamura for data collection and statistical analysis.