With the development of thoracoscopic instruments and techniques, video-assisted thoracoscopic surgery (VATS) lobectomy has become the first choice for early stage non-small-cell lung carcinoma. Most surgeons prefer three-port or four-port VATS lobectomy, because multiple ports provide different angles facilitating better dissection and division of the bronchus and vessels. We performed our first uniportal VATS lobectomy in November 2013, and both the surgeon and the assistant felt very fatigued after the operation. In an effort to achieve better ergonomics, we performed our first uniportal VATS lobectomy in a semiprone position in May 2014.

A 53-year-old male smoker was referred to our hospital due to an enlarged lesion in his right upper lung. Computed tomography (CT) showed a 1.5 cm solid lesion with pleural indentation in the right upper lobe adjacent to the oblique fissure. No metastases or contraindications were found in the preoperative evaluation. The clinical diagnosis was stage I primary lung cancer. Uniportal VATS right upper lobectomy in a semiprone position was performed (Figure 1). Intraoperative frozen section examination confirmed lung adenocarcinoma, and systematic lymphadenectomy was then performed. 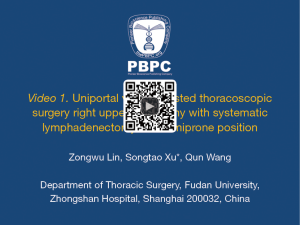 The patient was placed in a semiprone position under general anaesthesia, with single-lung ventilation provided by a double-lumen endotracheal tube. Thoracic paravertebral block was used. The surgeon and the sole assistant participating in the operation both stood on the ventral side of the patient. A single incision was employed, which was 3.5 cm long and positioned at the fifth intercostal space on the anterior axillary line. A plastic wound protector was used to prevent the lung from expanding when suction was applied. A high definition 30° 10 mm thoracoscope was placed at the posterior part of the incision.

The surgeon stood caudally, while the assistant stood cranially. The surgeon held the suction in the left hand, and the harmonic scalpel (or sometimes the double-jointed forceps or the endoscopic linear cutter) in the right hand. The assistant held the thoracoscope in one hand and the endoscopic grasper in the other hand (Figure 2). 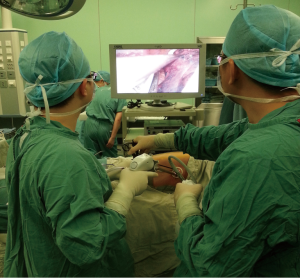 We began the procedure with exploration to find the lesion, locating it in the right upper lobe with pleural indentation, no metastases in the pleurae, complete oblique fissure and poor horizontal fissure. The oblique fissure was divided with a harmonic scalpel, and the ascending A2 pulmonary artery was exposed. The ascending A2 was closed proximally with two 5-mm vascular clips and then cut with a harmonic scalpel. The posterior mediastinal pleura was opened until the upper edge of the right upper bronchus was visible. The 12th group lymph nodes were dissected to the distal lung.

The right upper lobe was pushed down to expose the apico-anterior pulmonary arterial trunk. The apical artery and anterior artery branched from the right pulmonary arterial trunk separately in this case. The apical artery was mobilised, and cut with an endoscopic linear stapler, whereas the anterior artery was hard to expose at this angle. The 12th group lymph nodes between the upper right bronchus and apical artery were dissected to the distal lung at this angle. The right upper bronchus was mobilised with double-jointed forceps from the dorsal aspect, then transected with an endoscopic linear stapler. The anterior artery was then exposed dorsally, and cut with an endoscopic linear stapler.

The lung was pushed downwards by the assistant. The surgeon lifted the azygos vein via suction, and dissected the 4th group lymph nodes with a harmonic scalpel. After an approximately 1 cm length of the pericardium was exposed, the mediastinal pleura above the azygos vein was opened. The 2nd and 4th lymph nodes were dissected en bloc, with the right vagus nerve left untouched.

Uniportal VATS lobectomy was first reported by Gonzalez-Rivas et al. (2) in 2011. Gonzalez-Rivas et al. (2) proved the practical feasibility and safety of uniportal VATS lobectomy, and utilised the technique in more complex cases, including double sleeve lobectomy. The patient was placed in the lateral decubitus position in previous reports. Under such conditions, the cameraman is required to raise their arm to hold the thoracoscope, which easily leads to arm fatigue.

The oblique fissure is divided first, if the interlobar pulmonary is visible in the fissure. Otherwise, the oblique fissure is divided last. The horizontal fissure is divided last, unless it is completely developed. We did not grasp the lung or the lymph nodes throughout the operation, in order to reduce the possibility of trauma to the lung, and avoid crushing the lymph nodes. The lung was pushed to the appropriate angle using an endoscopic grasper containing a gauze, and a curved suction instrument. The lymph nodes were pushed to the appropriate angle via a curved suction instrument only. In uniportal VATS lobectomy, a semiprone position facilitates pushing of the lung, and facilitates more manipulation angles, less workload and better ergonomics for both the surgeon and the assistant.