In mitral valve (MV) repair surgery, the right minithoracotomy approach offers a good view directly facing the atrial side of the MV leaflets without excessive atrial retraction. Rib spreading, however, is mandatory for direct vision of the MV and instrumentation, which causes considerable postoperative pain. To avoid this, a non-rib-spreading strategy using a two-dimensional (2D) endoscope system is adopted in numerous institutions worldwide. Despite the great visibility with magnification, the operator lacks the depth perception with the 2D endoscopic view. This is a major challenge of the 2D endoscopic surgery, which might raise the entry barriers for cardiac surgeons. In this context, restoration of stereoscopic vision is potentially beneficial and could be achieved with the three-dimensional (3D) endoscopic system.

The aim of this study was to evaluate the feasibility and safety of the 3D endoscopic system in totally endoscopic MV repair without robotic assistance by reviewing initial cases in Korean populations.

A surgeon (JSY) carefully reviewed the patients, held a discussion with the patients, and performed the surgery. The authors retrospectively reviewed perioperative characteristics and early outcomes.

Conventional general anesthesia with double-lumen endotracheal intubation and single left lung ventilation was used in all the patients. A transesophageal echocardiographic (TEE) probe was inserted, and external defibrillator patches were attached on the back. After inserting a 5-Fr introducer sheath (Radiofocus Introducer II, Terumo Medical Corp., Tokyo, Japan) for the later superior vena cava cannulation through the right internal jugular vein, the patients were positioned supine with the right chest elevated approximately 30°. After sterile draping, a 4-cm minithoracotomy incision (working port) was made in the right fourth intercostal space (ICS) in the anterior- to mid-axillary line along the submammary crease. A soft tissue retractor (Alexis Wound Protector/Retractor, Applied Medical Resources Group, CA, USA) was placed, and no rib spreader was used. A separate 5-mm incision was made posterior to the working port for the sump catheter insertion, and a 10-mm trocar was inserted in the fifth ICS on the midaxillary line for the endoscope (Figures 1,2). A 30°-angled 3D endoscope was set and operated by an assistant. The chest cavity was flooded with carbon dioxide gas. Cardiopulmonary bypass (CPB) was established by cannulating the right internal jugular vein and femoral vessels with the percutaneous Seldinger technique or with a 2-cm-long oblique groin incision. When the femoral artery was cannulated percutaneously, two percutaneous suture devices (Perclose Proglide, Abbott Laboratories, Chicago, IL, USA) were used for closure. Vacuum-assisted venous drainage was used during CPB, and the pericardium was opened longitudinally 3 cm anterior to the phrenic nerve. An aortic root cannula was inserted, and the aorta was cross-clamped with a Glauber aortic clamp (Cardiomedical GmbH, Langenhagen, Germany) through the working port. Then, an antegrade, single-dose, modified del Nido cardioplegia was used for the myocardial protection. The MV was exposed through the interatrial groove using the Adams-Yozu left atrial retractor (Geister, Tuttingen, Germany) and standard mitral repair techniques were utilized. 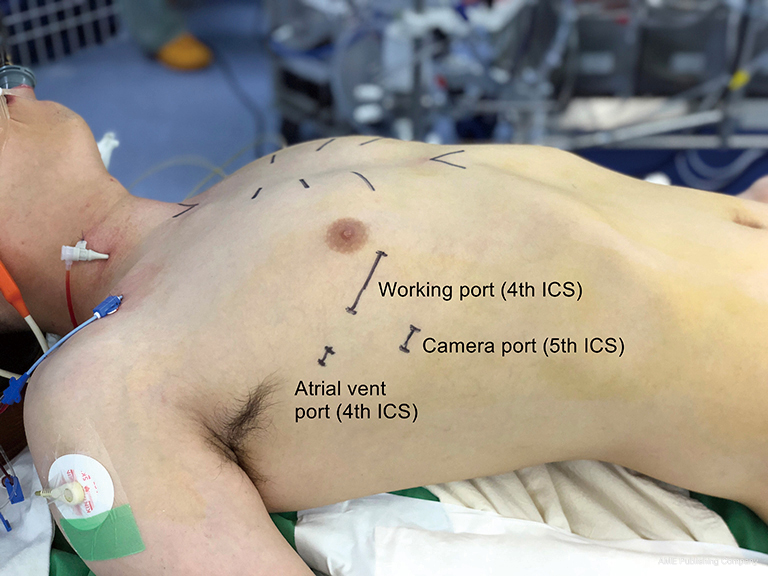 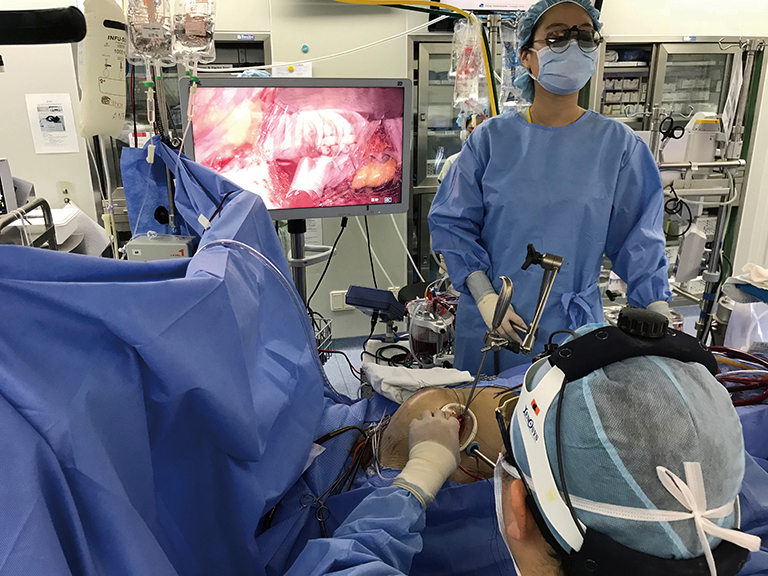 The result of the valve repair was evaluated with intraoperative TEE after weaning from the CPB. The two stab incision sites were used for chest tube insertion, and the working port incision was closed in the customary manner.

The present research protocol was reviewed and approved by the institutional review board of Sejong General Hospital, which waived the requirement to obtain informed consent owing to the retrospective nature of the study.

The baseline profiles of the 40 patients are listed in Table 1. The median age was 55 years (interquartile range, 45–59 years), and 7 patients had atrial fibrillation. On the preoperative echocardiography, 92.5% of patients had severe mitral regurgitation (MR) and the rest of them had moderate-to-severe MR. The prolapsing leaflets were anterior only in 8 patients, posterior only in 15 patients, and both anterior and posterior in 17 patients. The etiology of the MV was degenerative disease in all patients except in one, which was infective endocarditis.

Table 2 summarizes the operative data. MV repair was successfully performed in all the patients (n=40, 100%) without conversion to MV replacement. Various standard MV repair techniques were used with no limitations in regard to the diseased leaflet location. Mitral ring annuloplasties were performed in 39 patients except one who had a very small mitral annulus. Associated procedures were conducted in 10 patients as follows: concomitant tricuspid ring annuloplasty and atrial fibrillation ablation in 7 patients, solitary tricuspid annuloplasty in 2 patients, and ascending aorta replacement after sternotomy conversion due to ascending aortic dissection after declamping in one patient. The mean CPB and aortic cross-clamping times were 176.1±41.7 and 116.3±33.9 minutes, respectively. 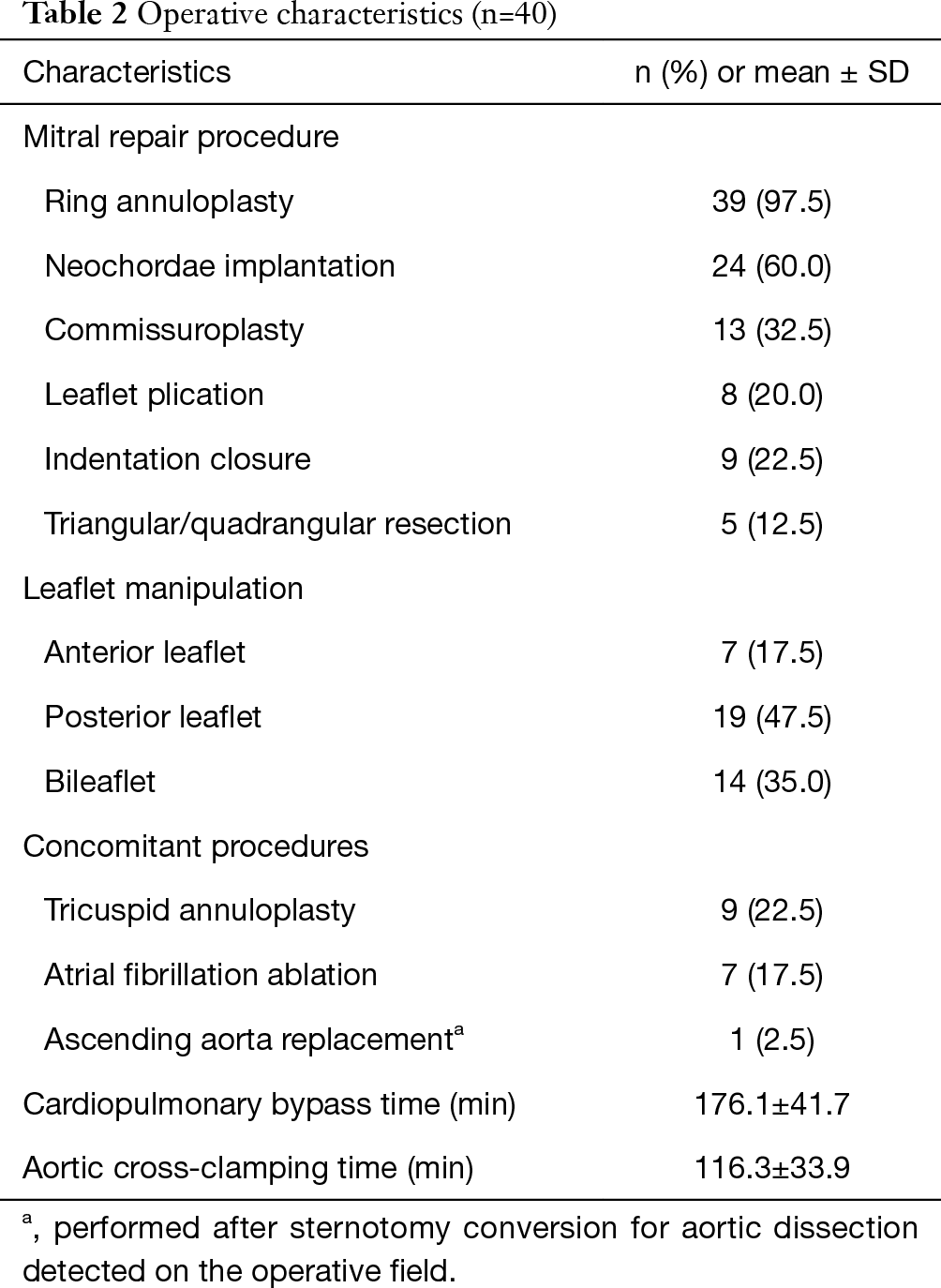 None of the patients had an operative mortality (Table 3). Except for 1 reoperation for bleeding from the aortic root cannula site, no immediate postoperative complications occurred. Postoperative and predischarge TTE was performed on postoperative day 5 (5.0±0.8 days; Table 4). Residual MR grade was none or trace in 38 patients (95.0%) and mild in 2 patients (5.0%). None of the patients needed reoperation for residual MR grades indicating moderate or severe residual disease. 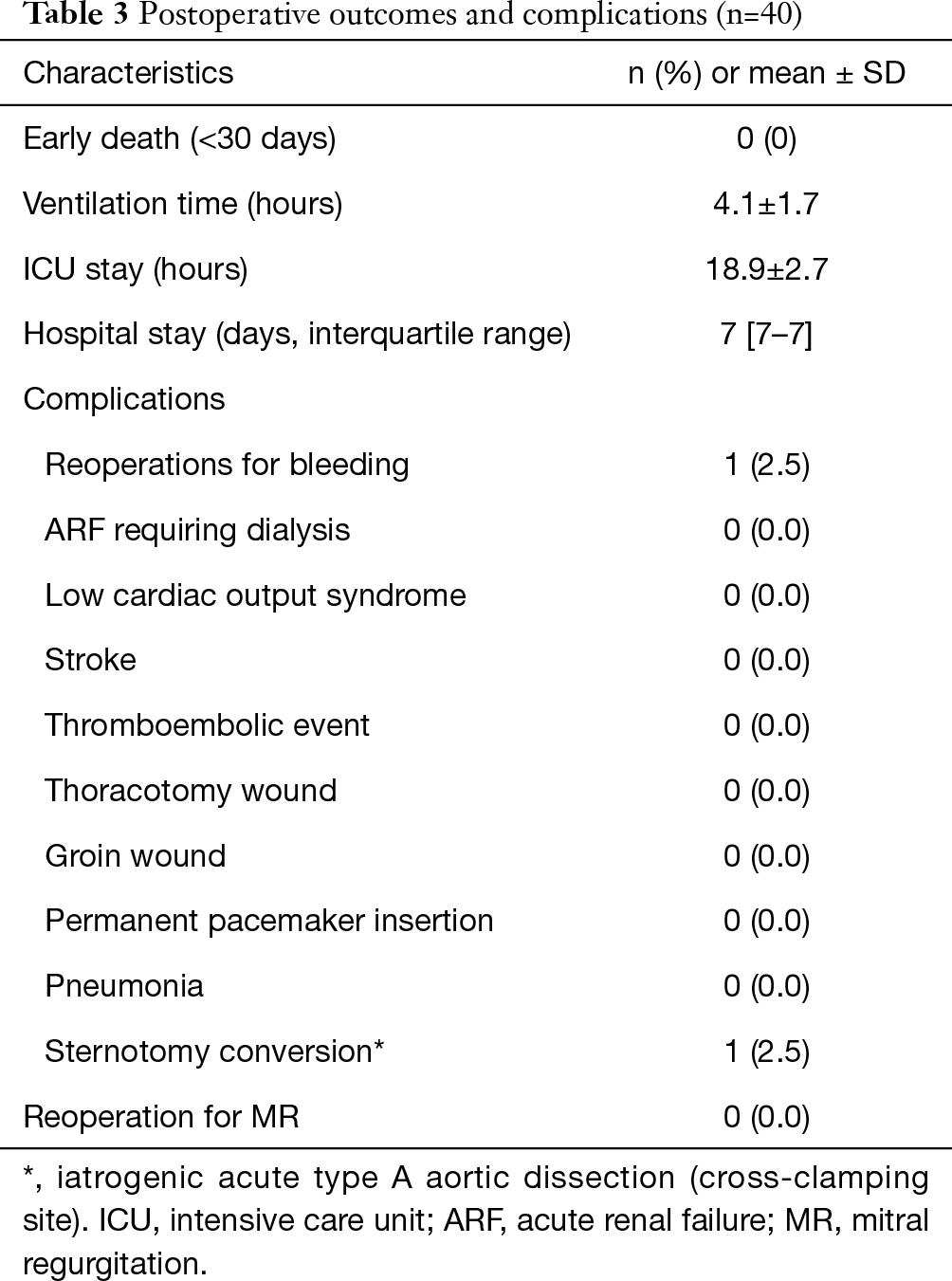 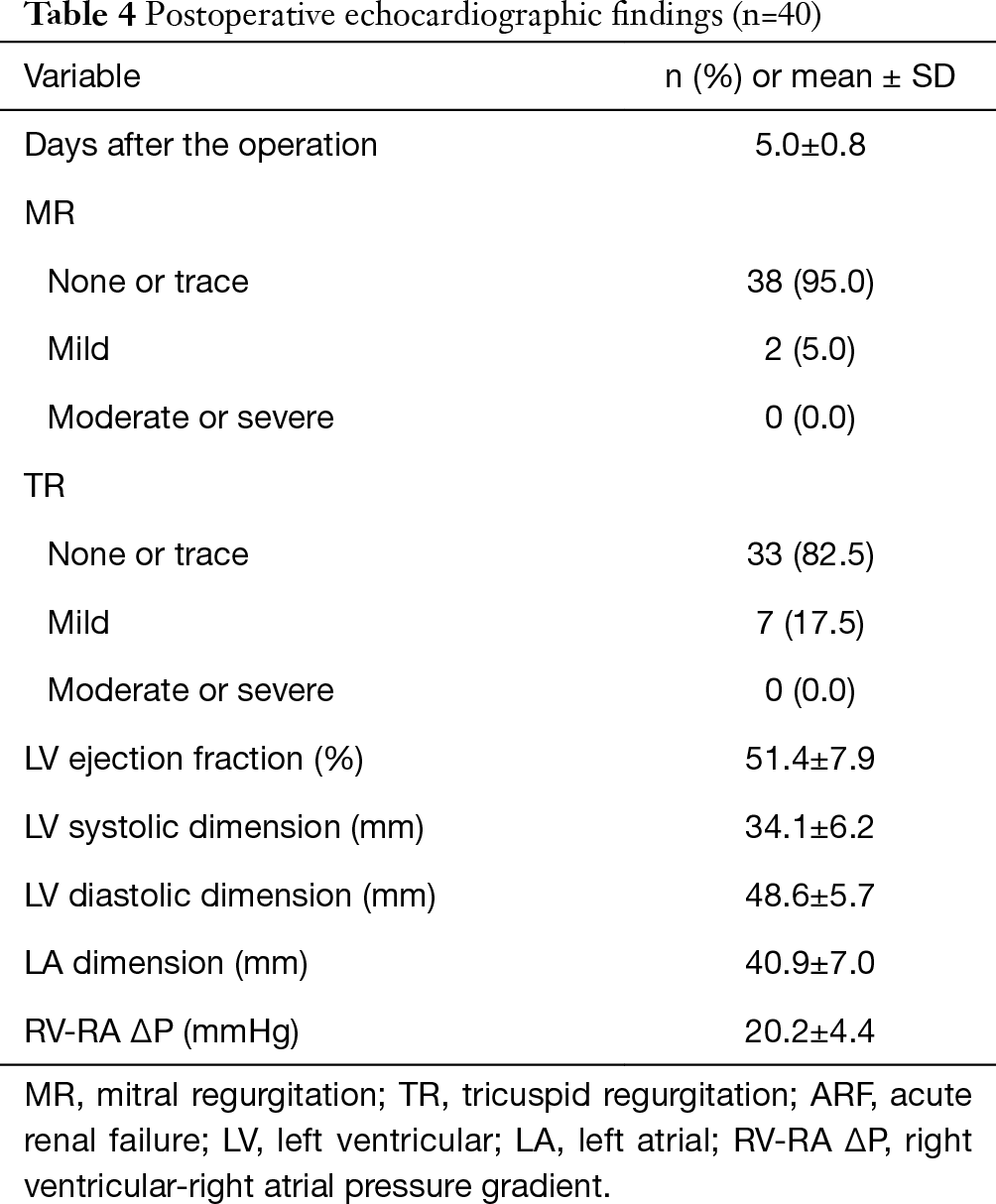 MICS, including robot-assisted cardiac surgeries, are gaining popularity worldwide with growing evidence of its feasibility, safety, and durability (2). For the MV repair, right-side thoracotomy or port access offers excellent exposure, that is, “the en face view,” without distorting the natural anatomy, so that the operator can evaluate the valve pathology and repair result in the virtually normal anatomical position of the heart.

The first step of MICS MV repair is the right minithoracotomy approach with direct vision (3). This needs an approximately 6-cm-long anterolateral submammary skin incision and rib spreading mostly at the fourth ICS. With this approach, however, visualization and illumination of the deep-seated subvalvular apparatus are often troublesome; therefore, a thoracoscope is frequently used for the assistant visualization. Installing a camera provides the same “surgeon’s view” on monitors to all the personnel in the operating room, which definitely helps them to assist the surgeon, and is also educational. Presentation of the surgical process also facilitates good communication with anesthetists and pump staff (4).

Rib spreading, on the other hand, causes significant postoperative pain and might induce rib fracture, or intercostal vessel/nerve injury. To avert these potential risks, totally endoscopic surgery without rib spreading could be performed with a 2D thoracoscope. Casselman et al. (5) reported that 93.5% of the patients experienced minimal to almost no procedure-related pain with excellent cosmesis with non-rib-spreading surgery. Despite the many advantages of using a 2D scope, the lack of stereoscopic vision is a major drawback, which impedes the quicker and natural movement of the operator.

In 1998, the first successful robotic cardiac surgery was performed with the advent of the robotic telemanipulation surgical system with a 3D camera, the da Vinci surgical system (Intuitive Surgical, Inc., Sunnyvale, CA, USA) (6). This system provides high-quality 3D visualization with magnification, which restores the stereoscopic vision, so that the surgeon can easily handle the instruments. In addition, the robotic system is equipped with multidirectional intracardiac instrument articulation, motion scaling, and tremor filtration functions (7). According to a recent Korean national database analysis, robotic cardiothoracic surgeries are increasing, and MV repair is the most commonly performed robotic cardiac surgery (8). Yoo et al. (9,10) demonstrated operative feasibility and favorable outcomes of robotic MV repair by reviewing the initial Korean experiences. Long-term results after the robotic MV repair from the same institution also showed excellent outcomes (11).

Nonetheless, robotic arms need additional two or more incisions on the chest. The main disadvantage of this telemanipulation system is the lack of tactile feedback; thus, the surgeon depends solely on the “visual feedback” during surgery. Furthermore, the high price of the robotic system, limited number of robotic instrument uses, and the need for two surgeons, a console surgeon and a bedside surgeon, raise issues concerning human and financial resources.

In this regard, totally endoscopic MV repair with a 3D scope without robotic assistance (3D TEMVR) might be a rational option. After securing the 3D endoscope system and semi-permanent long-shaft MICS instruments, no additional surgeons or payment for the instruments is needed.

Basically, all the procedures in 3D endoscopic surgery are identical to those in direct vision and 2D endoscopic surgery; thus, no additional training is necessary. Accordingly, in our initial 3D TEMVR experiences, virtually all kinds of conventional MV repair techniques were feasible (Table 2).

Compared with robotic surgery, 3D TEMVR has a definite advantage of having direct tactile feedback in addition to a magnified stereoscopic vision. Obesity and an excessively deep thoracic cavity increase the level of difficulty of MICS for difficult handling of long-shafted instruments (12). Robotic surgery might be a superior option for these particular patients, but considering relatively thin body habitus in the Korean population, 3D TEMVR would be suitable in most cases.

Meanwhile, researchers in various surgical fields have addressed the ergonomic issues regarding surgical 3D imaging. Common concerns were burning eyes, eye focusing, visual fatigue, visual adaptation of 3D to 2D, discomforts, nausea, fatigue, and vertigo. These concerns, however, were not significant or relevant (15,16).

This study has some limitations owing to retrospective single-institution small-volume observational study design without a control group. Only one surgeon performed the procedures; therefore, inter-operator differences could not be studied.

In conclusion, 3D TEMVR is technically feasible and safe, with excellent clinical outcomes and good cosmesis in this initial Korean experience. Further large-scale investigations, including long-term follow-up results, are warranted.

Ethical Statement: The authors are accountable for all aspects of the work in ensuring that questions related to the accuracy or integrity of any part of the work are appropriately investigated and resolved. The present research protocol was reviewed and approved by the institutional review board of Sejong General Hospital, which waived the requirement to obtain informed consent owing to the retrospective nature of the study.