Primary hyperhidrosis (PH) is characterized by excessive and uncontrollable secretion in the eccrine sweat glands of the craniofacial region, armpits, hands, and feet (1,2). PH is generally considered to be associated with sympathetic nervous dysfunction; however, its etiology remains unclear (1-3). PH leads despairing impacts on quality of life (1,2). The treatment modality for PH includes a range of topical or systemic medications, psychotherapy, and surgical or non-surgical approaches (3-5). Many studies have been conducted to manage PH and sympathicotomy is the most effective for PH when conservative treatment has failed (6-9). However, in spite of advances in surgical techniques for sympathicotomy, compensatory hyperhidrosis (CH) remains the most important postoperative complication, which occasionally causes patients to regret receiving sympathicotomy and surgeons to hesitate to use a prompt sympathicotomy as the first treatment modality for PH, especially for craniofacial hyperhidrosis (4,10-12). The pathogenesis of CH is hypothesized to be caused by a dysfunctional reflex arc from the sympathetic nervous system to hypothalamus, which causes uncontrollable and excessive sweat in other parts of the body (13,14). Many studies have been performed, and some risk factors for CH and the extent of sympathicotomy have been suggested (6,7,11,15-18). However, many questions remain. The purpose of the present study was to suggest a new sympathicotomy method for PH to prevent severe CH.

From March 2014 to December 2018, patients with PH who had undergone sympathicotomy and met the inclusion criteria were included in the study. Inclusion criteria for the study were as follows: (I) localized PH mainly in the craniofacial region and hands; (II) no previous thoracic surgery including sympathicotomy for PH; (III) no medication intake; and (IV) no definitive psychological problems (11,15). Our new technique was initiated in January 2017. All patients received sympathicotomy using the thoracoscopic technique on hospitalization. Data on preoperative subject characteristics, disease status, operative technique, and postoperative outcomes were gathered using medical records and telephone surveys. The telephone survey questionnaire consisted of determining changes in preoperative PH, degree and localization of CH, and recurrence or failure. Operative effectiveness was evaluated by a reduction in percentage of post-operative sweating compared with pre-operative sweating and groups were divided into complete and incomplete sweat reduction characteristics. Complete sweat reduction was defined as sweat reduction ≥ 80% compared with preoperative sweating. Incomplete sweat reduction included cases with sweat reduction <80% and recurrence. The degrees of CH were classified as negligible, mild bothering (tolerable), and severe bothering (intolerable). Gustatory hyperhidrosis was not evaluated and was excluded. All subjects were routinely assessed one month after sympathicotomy.

All data are presented as the mean ± SD. Student’s t-tests were used for continuous independent variables. The chi-square statistic was used to check relationships between categorical variables. The results were analyzed using the Statistical Package of Social Sciences version 22.0 (SPSS, IBM Corp, NY, USA), with a value of significance at 0.05. Approval from Uijeongbu Saint Mary’s Hospital Ethics Committee was obtained for the present study (Approval number: UC19RESI0119).

A total of 212 patients were included in the study. The mean age of study subjects was 29.6±14.9 years at the age of surgery and the mean observation periods was 26.7±18.2 months. Of the included patients, 129 were male and 83 were female. The hyperhidrosis types included 53 craniofacial and 159 palmar cases. According to sympathicotomy techniques, the conventional procedure was performed in 145 cases and the new expanded sympathicotomy procedure was performed in 67 cases. Sympathicotomy levels were performed as follows: 53 at R2, 79 at R3 and 80 at the R4 levels. There were no postoperative mortalities or major complications. All patients receiving expanded sympathicotomy showed no CH in the upper body, but some in the lower body (under level of umbilicus). The overall clinical characteristics of the study subjects are presented in Table 1. 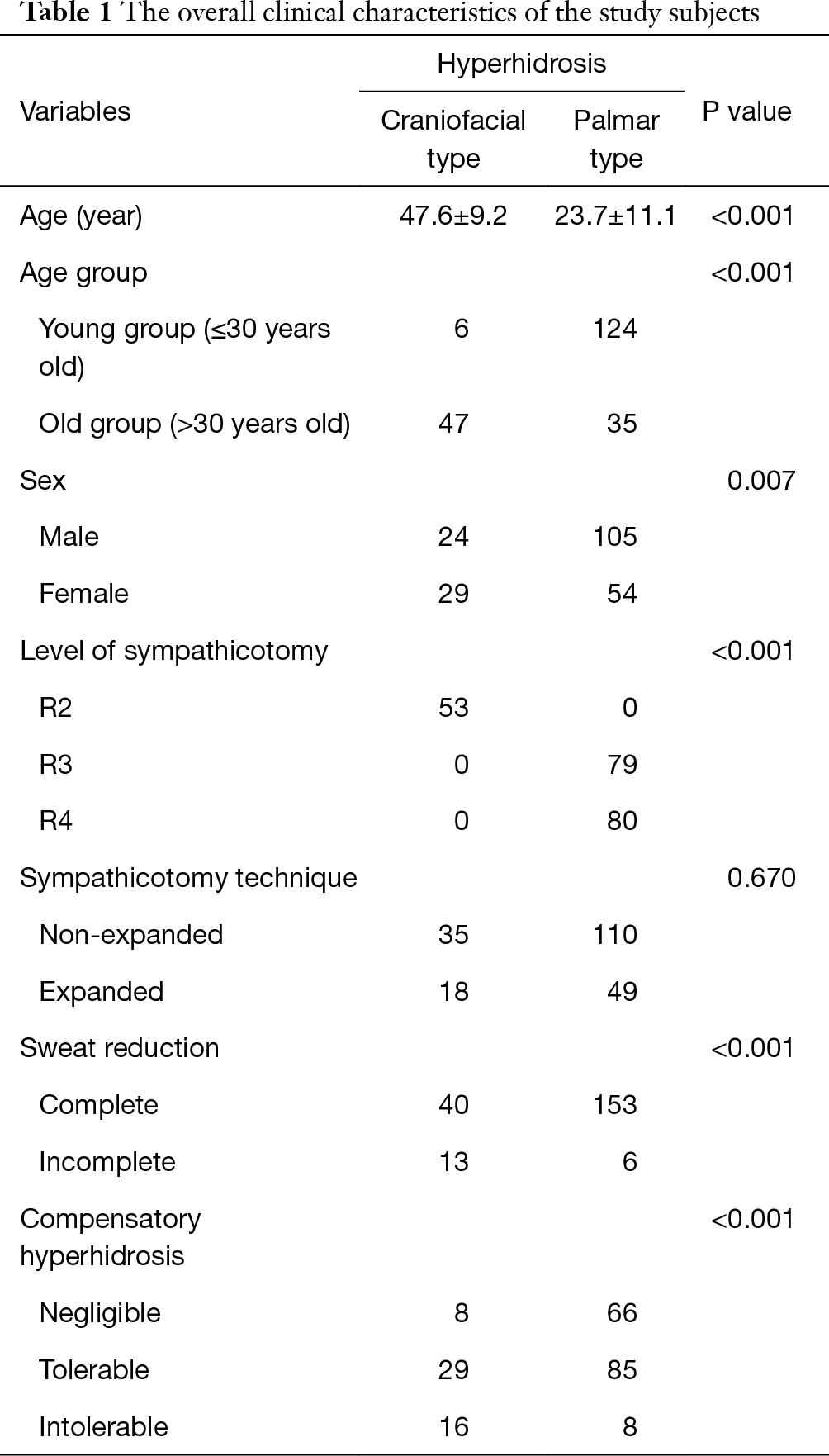 Hyperhidrosis according to age and sex

All subjects were divided into two groups according to age [young group (YG) ≤30 years vs. old group (OG) >30 years old]. The YG included 130 cases and the OG included 82 cases. Craniofacial hyperhidrosis was significantly more prevalent in the OG and in female patients (P<0.001 and P=0.007, respectively) (Table 1). 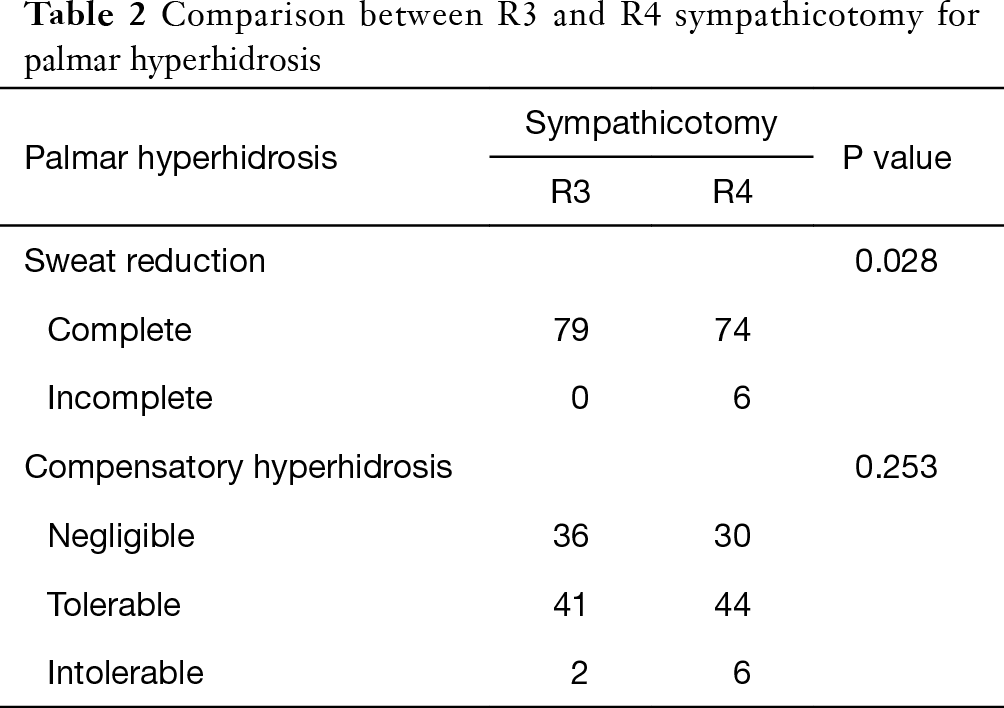 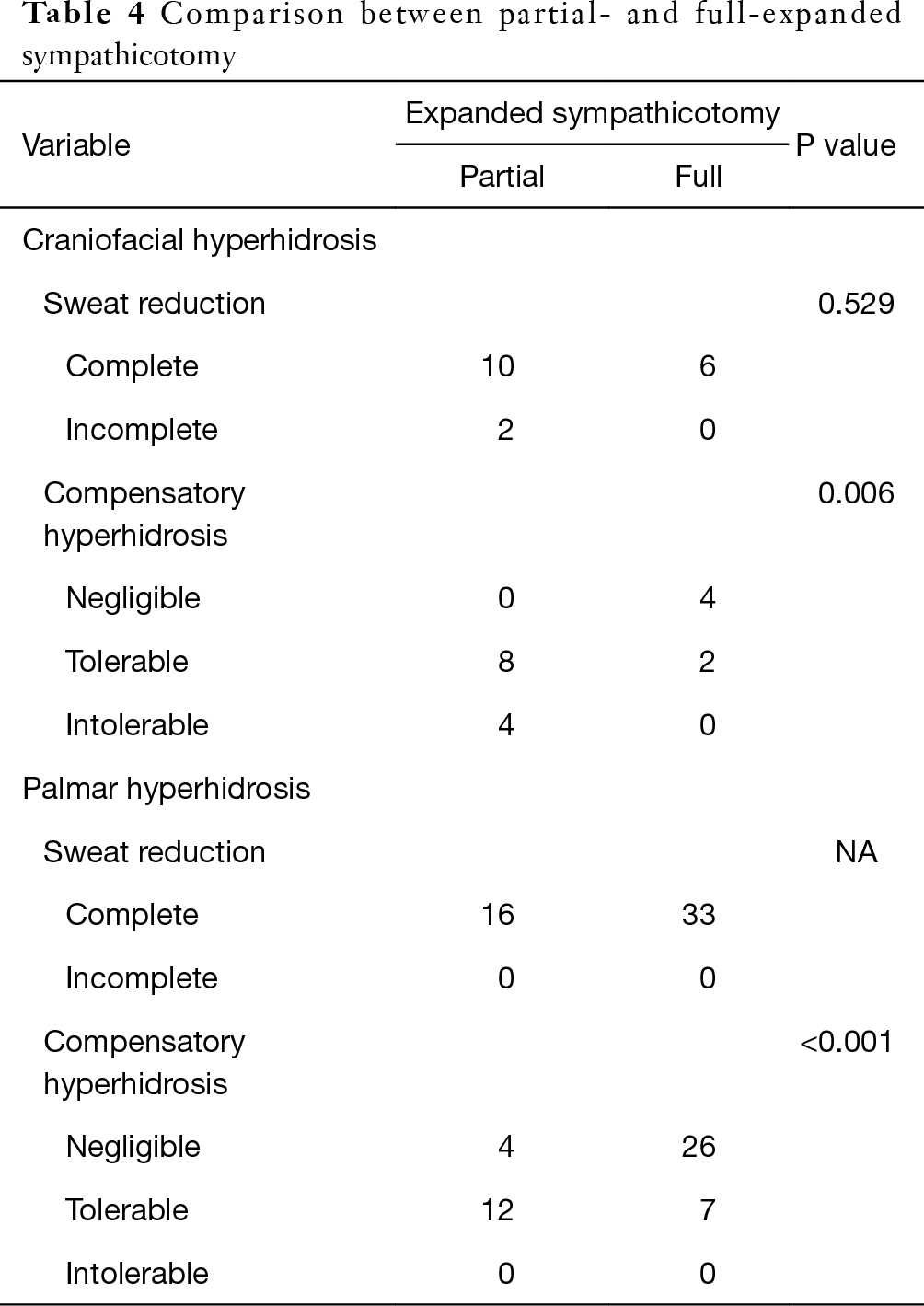 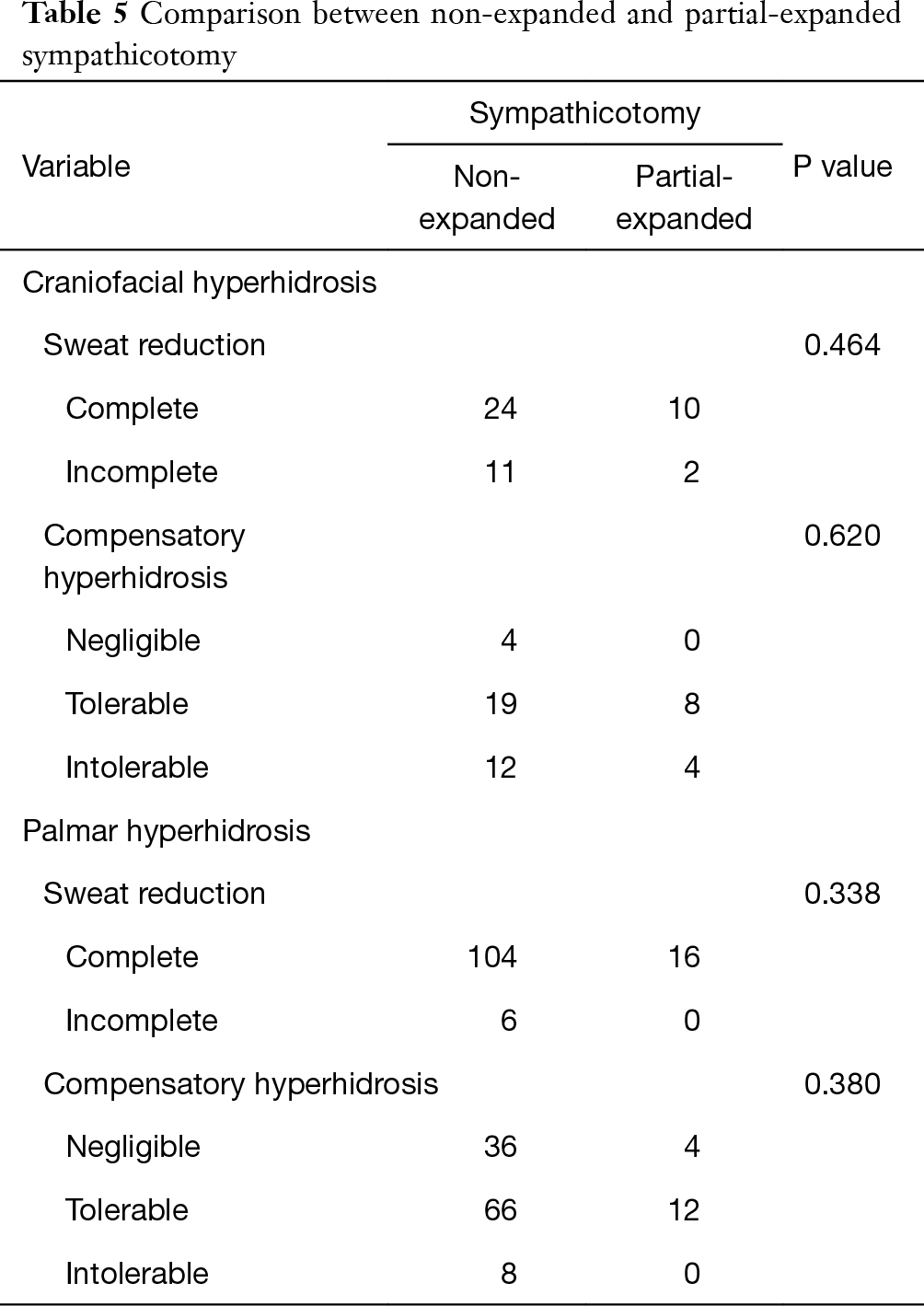 The primary limitations of our study included the single-center nature of the study, its retrospective nature, and the small sample size for dealing with various factors. Patients in this study were not randomized to type of hyperhidrosis and sympathicotomy. However, because the overall outcomes for sweat reduction and CH were similar to those previously reported in the literature, the subjects were not considered to create a severe bias (6,22,32). Compared with other studies, we strictly defined the degree of sweat reduction and CH to more clearly evaluate the effects of the types of sympathicotomy.

Ethical Statement: The authors are accountable for all aspects of the work in ensuring that questions related to the accuracy or integrity of any part of the work are appropriately investigated and resolved. The study was approved by Uijeongbu Saint Mary’s Hospital Ethics Committee (Approval number: UC19RESI0119).