OLV requires effective nonventilated lung collapse to facilitate surgical exposure. The insertion of a DLT is a well-established technique for achieving OLV; however, since a DLT has a relatively large external diameter and needs to be rotated during the insertion process, the potential risk for traumatic injuries to the airway is high (4). An alternate technique for achieving OLV is the use of a BB (5). The use of a BB causes few hemodynamic fluctuations, and the incidence of postoperative sore throat is low, but some studies have suggested that the use of a BB takes longer to collapse the operative lung than the use of a DLT, especially in patients with chronic obstructive pulmonary disease (COPD) (5).

Using a two-minute disconnection technique with a DLT has been shown to accelerate the nonventilated lung collapse during OLV in VATS (6). However, the effectiveness of this BB technique in VATS has not been tested systematically, and the proper time for disconnection and the monitoring technique needed have not been provided.

This prospective randomized trial (ChiCTR1900022373) was approved by the Ethics Committee of Fudan University Shanghai Cancer Center (FUSCC), China (Number 1902197-7). From 10 April 2019 to 31 July 2019, patients undergoing scheduled VATS via a left lobectomy or segmentectomy were enrolled in this study. All patients provided written informed consent. These patients were randomized via a computer-generated number sequence into two groups: a group that received a BB with the disconnection technique (Group B) and a group that received a left-sided DLT with spontaneous collapse (Group D). The inclusion criteria were an age between 20 and 65 years and an American Society of Anesthesiologists (ASA) physical status of I or II. The exclusion criteria were patients with a previously diagnosed or suspected difficult airway, left main bronchus abnormality, history of thoracic surgery or pleural disease, history of COPD or severe asthma, forced expiratory volume in 1 second (FEV1) or forced vital capacity (FVC) less than 50% of normal values, and communication disorder or mental illness.

The patients received no premedication regimen. After arriving in the operating room, all patients received standard monitoring: pulse oximetry, electrocardiography (ECG), peripheral or central venous access and invasive blood pressure monitoring using the right radial artery. Then, all patients were subjected to the induction of general anesthesia by intravenously administered 0.5 µg/kg sufentanil; the target-controlled infusion (TCI) of 2% propofol at an effect-site concentration (Ce) of 4 µg/mL; and 0.8 mg/kg rocuronium. After the onset of muscle relaxation and after the propofol Ce reached 2 µg/mL, the patients were intubated with a single-lumen endotracheal tube (SLT) or the DLT. In Group D, the patients were intubated using a left-sided DLT (Covidien. Cornamaddy, Co. Westmeath, Athlone, Ireland) of an adequate size (size F35 for women and size F37 for men). The DLT was positioned appropriately using a fiberoptic bronchoscope (FOB). Patients in Group B were intubated using an SLT (male ID 8.0 mm, female 7.5 mm) with a depth of 22–24 cm and fixed. Then, the Coopdech BB (Hangzhou Tappa Medical Technology CO., Hangzhou, China) was positioned through the SLT under the guidance of the FOB so that the cuff of the BB was placed in the left main bronchus. An experienced anesthesiologist confirmed the correct placement of either the DLT or the BB. After the patients were turned in order to achieve a right lateral decubitus position, the correct placement of the BB and DLT was reconfirmed using the FOB.

Until the start of surgery, all patients were maintained on two-lung ventilation (TLV), and the cuff of the BB and the bronchial cuff of the DLT were kept deflated. For TLV, mechanical ventilation operated in a volume-controlled mode with a tidal volume of 7–8 mL/kg (ideal body weight), a respiratory rate of 10–12 breaths/min, a positive end-expiratory pressure (PEEP) of 5 cmH2O, and an FiO2 level of 1.0. When the surgeon performed the skin incision, OLV was initiated in both groups. In Group D, the bronchial cuff of the DLT was inflated, and the left channel was opened to the air. In Group B, the lung was deflated via the disconnection technique, turning the ventilator off and opening the breathing circuit to the air. No further maneuvers were performed to facilitate lung collapse. Fifteen seconds after opening the pleura and seeing the lung, the cuff of the BB was inflated with 5 to 8 mL of air to obtain total bronchial, and then ventilation was started again. During OLV, the ventilator settings in both groups were adjusted to keep the peak pressure below 25 cmH2O by decreasing the tidal volume to 5–7 mL/kg, and the FiO2 level was adjusted to 0.9. The ventilation parameters were adjusted to maintain the end-tidal carbon dioxide (ETCO2) level between 35 and 45 mmHg. At the end of the surgery, after the lung recruitment maneuver, TLV was maintained with an FiO2 level of 0.5 and a PEEP of 5 cmH2O. When the operation was completed, the patients were transferred to the post-anesthesia care unit (PACU).

The following variables were recorded in this study:

After randomizing into two groups, the patients, the surgeon scored the quality of lung collapse, the anesthesia nurse in the PACU and for post-operative follow-up were blind to the allocation.

We calculated the sample size based on preliminary results for the first ten patients of each group and estimated that 35 patients in each group would be required to detect a mean difference of 10% and standard deviation of 10% with adequate lung collapse and 90% power at a significance level of P<0.05. We factored in a 10% dropout rate and enrolled 85 patients in our study. Statistical analyses were performed with SPSS version 17.0 (SPSS Inc., Chicago, IL, USA). The continuous variable is presented as the mean ± standard deviation (SD). The independent samples t-test and the Chi-squared test were used to evaluate the differences between groups in terms of quantitative and qualitative variables, respectively. A P value <0.05 was considered statistically significant (8). 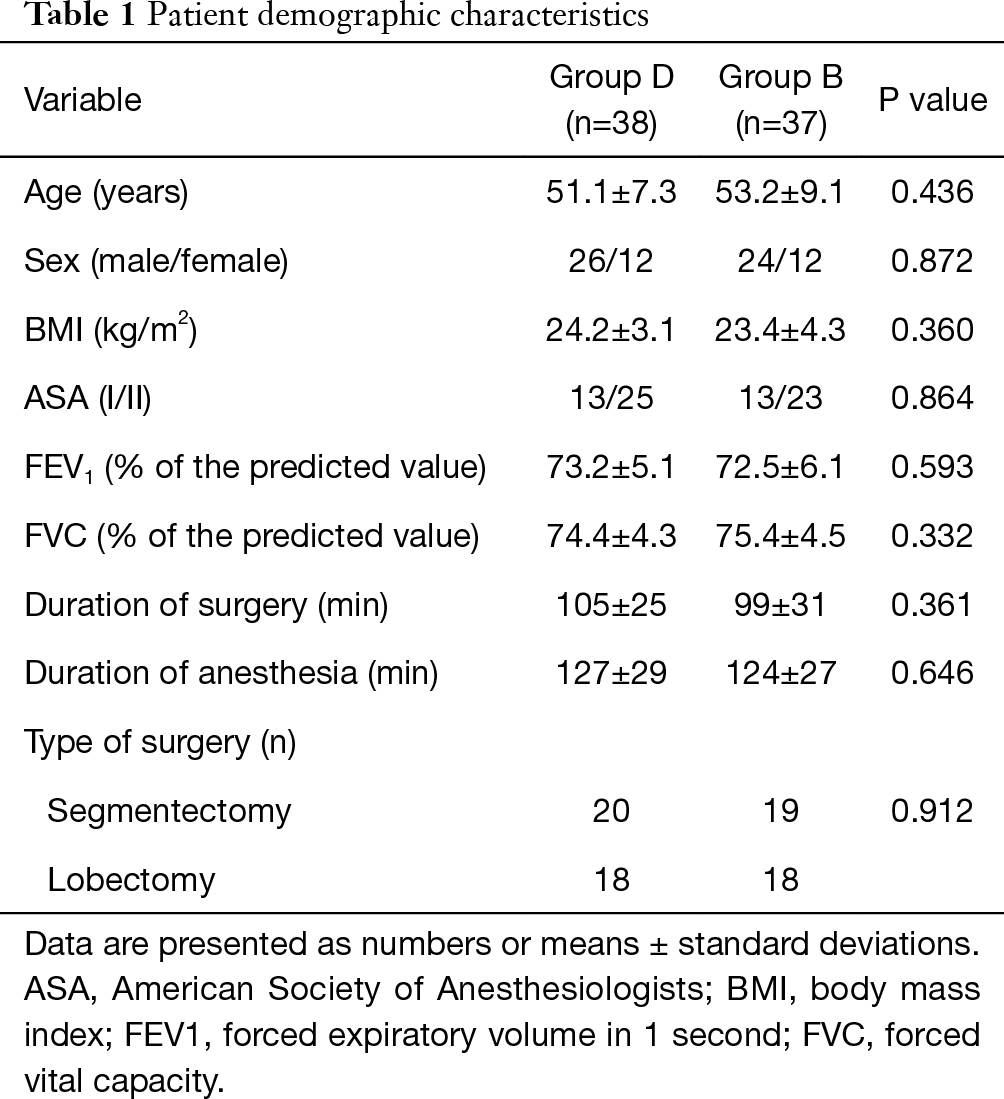 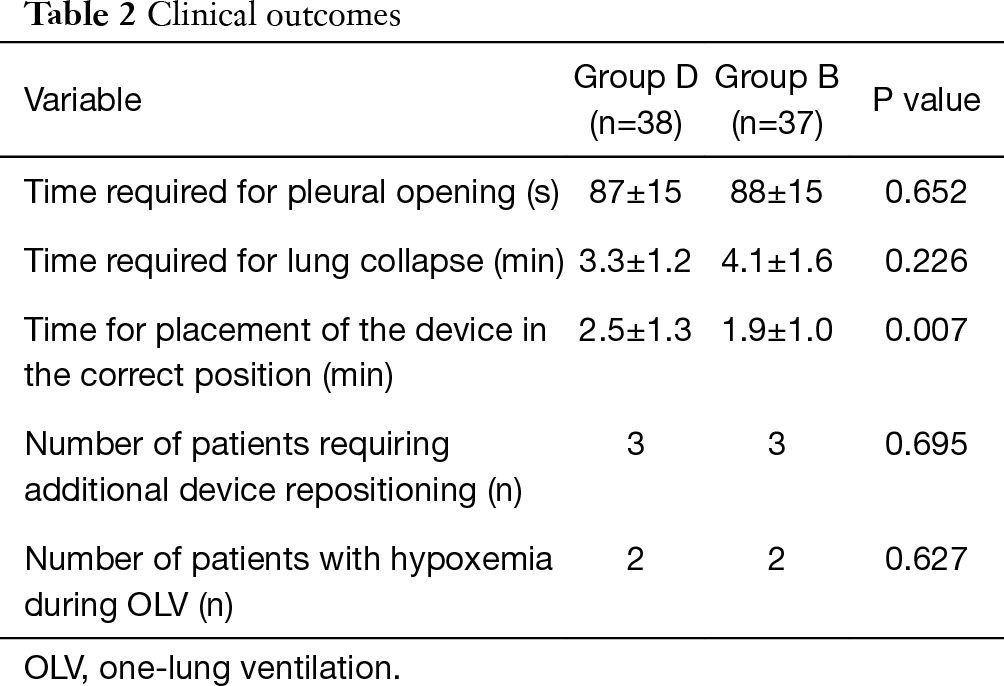 Figure 2 The quality of lung collapse.

Figure 4 The percentage of patients suffering from sore throat.

In this randomized controlled trial, we found that the use of a BB with a disconnection technique could achieve similar lung collapse to the use of a DLT in VATS with fewer slight fluctuations in hemodynamics after intubation, a shorter intubation time and a lower incidence of postoperative sore throat.

Lung isolation techniques have been extensively used to allow OLV in patients undergoing thoracic surgeries (9,10). OLV requires effective nonventilated lung collapse to facilitate surgical exposure (11). Traditionally, insertion of a DLT has been considered a well-established technique for achieving OLV and has been routine for most anesthesiologists. Some anesthesiologists favor a DLT for its advantages of being quick and easy to place, its convenient CPAP application and its rapid lung collapse (3,10). Our results indicated that for patients undergoing the use of a BB with the disconnection technique could achieve similar lung collapse to those with the use of a DLT, with a shorter time needed for placement of the device in the correct position. This result may be due to the biphasic nature of lung collapse: a fast collapse phase within the first minute followed by a slow collapse phase during which small airway closure occurs and residual lung gases are absorbed (12,13). The disconnection technique with the use of a BB resulted in similar rapid lung collapse in both groups, while the slower collapse phase was not related to the device used. Some methods have been assessed in terms of lung collapse during isolation techniques, such as denitrogenation with an FiO2 of 100% oxygen using nitrous oxide and suction (13,14). Our study showed that the use of a 15-second disconnection technique with a BB in OLV could accelerate lung collapse and result in excellent lung deflation for satisfactory surgical exposure.

Similarly, a BB has advantages when used for lung isolation, such as that it can be used for patients with a “difficult” airway when a DLT is difficult or impossible to use and that it has limited potential for airway trauma (15,16). Our results indicate that the use of a BB rather than a DLT has slightly smaller hemodynamic interference after intubation, which is beneficial for aged patients or patients with accompanying complicated comorbidities. Additionally, the incidence of postoperative sore throat was significantly lower in Group B than in Group D. In addition, although the disconnection technique with the use of the BB required 15 seconds of ventilation cessation after opening the pleura, there was no significant difference in the incidence of hypoxemia during surgery between the two groups, on account of previous adequate oxygen reserve. This finding indicates that the disconnection technique can be safely used for patients undergoing thoracic surgery.

Conflicts of Interest: WC serves as the unpaid section editor of Journal of Thoracic Disease. The other authors have no conflicts of interest to declare.

Ethical Statement: The authors are accountable for all aspects of the work in ensuring that questions related to the accuracy or integrity of any part of the work are appropriately investigated and resolved. This prospective randomized trial (ChiCTR1900022373) was approved by the Ethics Committee of Fudan University Shanghai Cancer Center (FUSCC), China (Number 1902197-7). All patients provided written informed consent.