Lung nodules and lung consolidation are common manifestations of respiratory diseases, and many lung lesions require pathological examinations and cultures to clarify the cause and pathogen. It is important to know whether the lesion is malignant and the pathogen of the infectious disease before a clinical treatment is decided upon. Imaging-guided percutaneous lung biopsy, endobronchial ultrasound (EBUS)-guided lung biopsy, bronchoscopy transbronchial lung biopsy (TBLB) and thoracoscopy lung biopsy are important methods in the diagnosis of lung lesions. In comparison to other methods, imaging-guided percutaneous lung biopsy is minimally invasive, safe and can obtain tissue from inside the lesion directly. With the development of imaging technology, the space resolution of computed tomography (CT) and ultrasound (US) have improved greatly, and these two methods are widely applied in clinical practice to guide lung biopsy.

A recent study showed that ultrasound-guided lung biopsy (USLB) of peripheral lung lesions is safer and faster than CT-guided lung biopsy (14,15), and its diagnostic yield to establish a malignant diagnosis is acceptable (15). However, the accuracy of USLB lacks large sample studies. USLB has many advantages. Ultrasound has real-time guidance and can reach the lesion quickly and precisely. The vessels in the target lesion and adjacent lung tissue can be observed clearly by colour Doppler flow imaging (CDFI), and most biopsy-related lung haemorrhages can be avoided. If lung haemorrhage or pneumothorax occurs, they can be observed with ultrasound in time, and emergency treatment can be provided. In addition, the lung tissue obtained by biopsy can not only be used to distinguish malignant lesions from benign lesions but can also be used to detect specific pathogens for drug testing and antibiotic selection. However, lung tissue culture is not common in clinical practice and lacks relevant studies.

In this study, the efficiency of diagnosing tumours and infectious diseases with USLB is investigated, and the safety of USLB is evaluated.

In the study, target peripheral lung lesions were defined as lesions adjacent or less than 3 cm away from the pleura, which could be visualised by ultrasound. The original ultrasound images, laboratory examination results, pathological results, culture results (biopsy, bronchoalveolar lavage fluid and sputum) from 507 percutaneous ultrasound-guided pleural biopsies from 489 patients between September 2015 and August 2018 were retrospectively reviewed. The patients were all from China-Japan Friendship Hospital with undiagnosed and untreated lung lesions. The exclusion criteria were as follows: (I) coagulation function was severely abnormal (platelet count <60×109/L, prothrombin time >20 s or prothrombin time activity <60%) without the need for emergency treatment; (II) mental diseases that would cause the patient to not cooperate; and (III) the final diagnosis of the lung lesions was uncertain and was followed up for less than 6 months or was lost to follow-up.

The patients were placed in a lateral decubitus, dorsal decubitus or sitting position according to the puncture point. Before the biopsy, an ultrasound scanner (Toshiba Aplio500, Japan) was used to observe the position, size and shape of the lesion to work out a puncture plan. An 18G (Argon Medical Devices, Inc.) automated cutting needle was used to perform the biopsy with the patient under local anaesthesia with 2% lidocaine. Three punctures were performed. Two specimens were fixed in 10% formalin for histopathological examinations, and one specimen was placed into normal saline for culture. CDFI was used to evaluate the presence of lung haemorrhage, and reptilase (Hemocoagulase Atrox for Injection, Nuokang Medicine) was injected intramuscularly when necessary. The method of detecting microbes included acid-fast staining, Gomori methenamine silver staining, normal bacterium culture, normal fungal culture, mycobacterium culture and the GeneXpert system.

A total of 501 cases of USLB were reviewed (6 patients were excluded because they were lost to follow-up), and 18 patients underwent two procedures. The study included 335 males and 166 females. The age of the patients ranged from 15 to 91 (60±15) years. All patients had specimens for pathological examination, and 317 patients had specimens for lung tissue culture. The length of the lesion on the CT images ranged from 1.3 to 11.9 cm (5.01±2.57 cm). The lesions consisted of 40 cases of ground glass opacity and 461 cases of solid or part-solid lesions. The distance from the lesion to the parietal pleura (including the pleural effusion) ranged from 0 to 5.2 cm (2.12±1.77 cm).

The pathological and culture results of USLB are shown in Table 1. 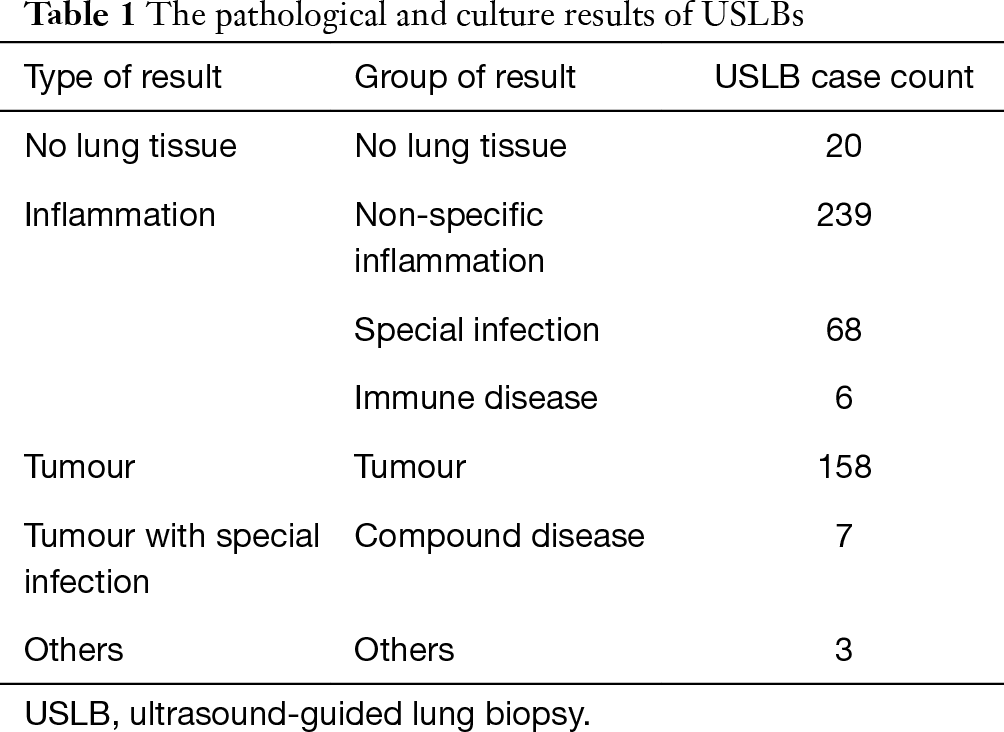 Table 1 The pathological and culture results of USLBs
Full table

Lung tissue was successfully obtained in 481 of the 501 lesions for pathological examination with USLB, so the technical success rate of USLB was 96.0%. The 20 cases in which USLB did not obtain lung tissue included those of lung abscess, pneumonia, lung cancer and idiopathic interstitial pneumonia. The accuracy of classifying the type of lesion (benign or malignant lesion) was 93.4% (468/501). The diagnostic accuracy (the pathological results and culture results were in accordance with the gold standard) of USLB was 82.0% (411/501). USLB missed 20 tumours, so the accuracy of diagnosing tumours was 88.5% (154/174). The positive rate of USLB lung tissue cultures was 18.3% (58/317). Fifty-five percent (58/105) of the cases of special infection were diagnosed by USLB (including through staining, GeneXpert and culture). The accuracy of diagnosing mycobacteria infection was 62.7% (27/43). The details of the final diagnoses are shown in Tables 2,3. 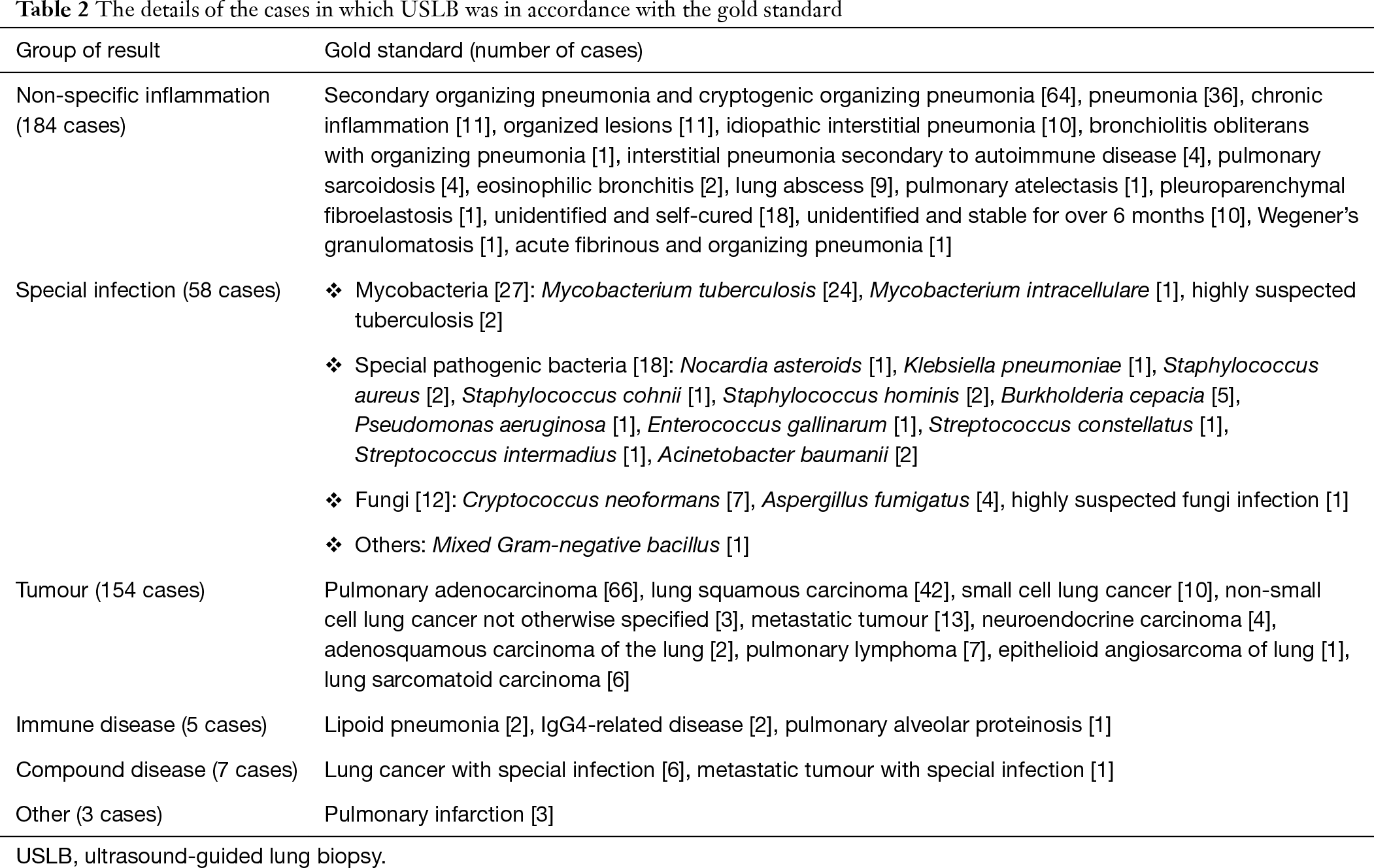 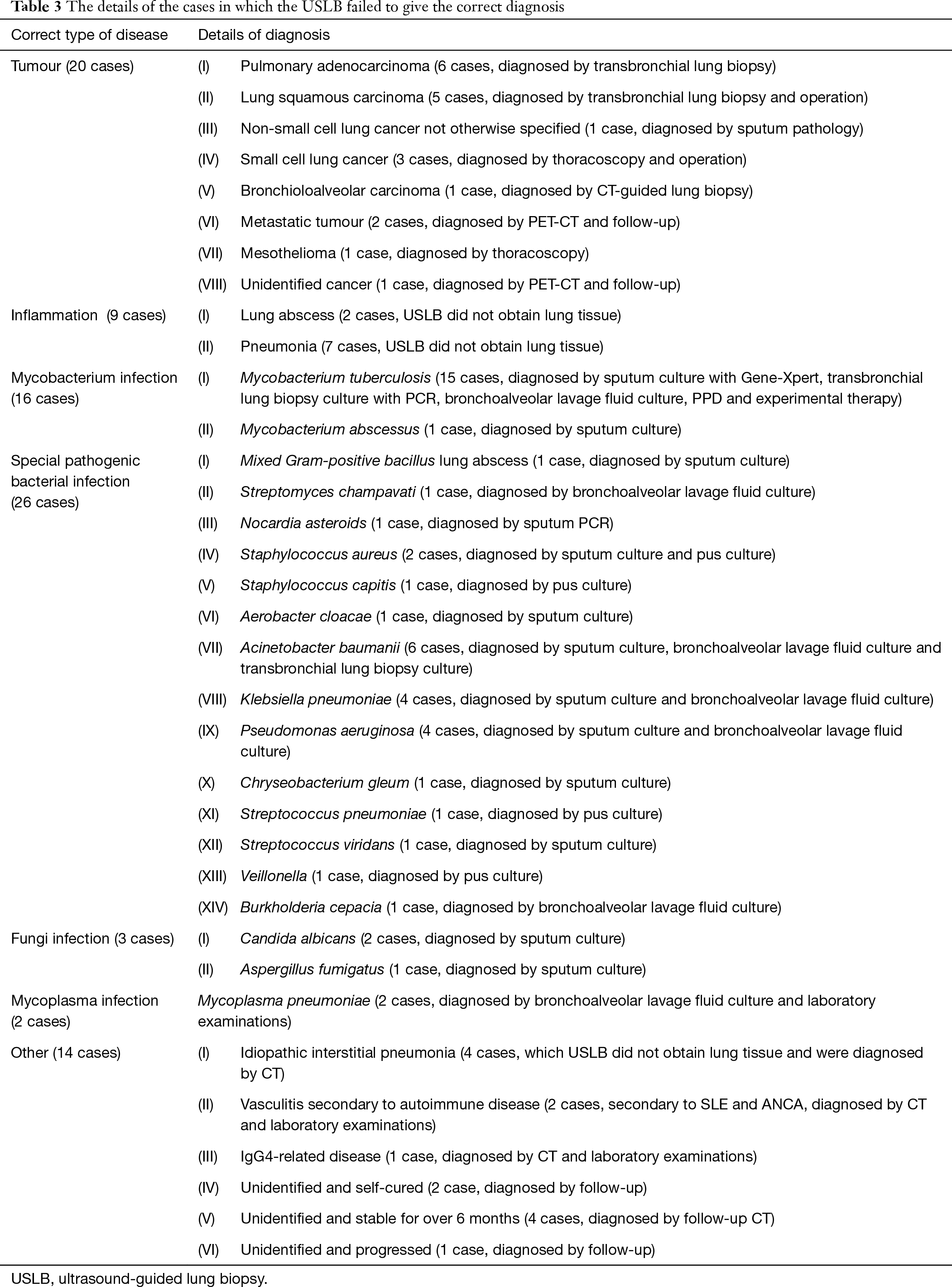 Generally, the gas part of the lesion is avoided during the biopsy in case of pneumothorax (Figure 1). A total of 45 patients had complications related to USLB, and one patient had a fatal lung haemorrhage but survived with emergency treatment. The details are shown in Table 4.

Figure 1 Images show the ultrasound-guided biopsy procedure of a 52-year-old male patient who came to the hospital because of aspiration pneumonia, and the USLB culture result was Klebsiella pneumonia. (A) The lung specimens were acquired with real-time ultrasound-guided biopsy. The path of the needle (black arrow) and the dense echo gas in the lesion (white arrow) is shown; (B) CT image shows lung consolidation (white arrow) in the target lesion; (C) histopathology of the specimen showed acute inflammation of the lung.

USLB has many advantages over thoracoscopy and CT-guided lung biopsy. USLB is minimally invasive, does not need radiation, and provides real-time guidance, which can enable the operator to adjust the biopsy angle precisely and notice complications in time. During USLB, the operator can avoid large bronchi and vessels, which may reduce the probability of haemorrhage and pneumothorax. USLB is performed under local anaesthesia and is safer and simpler than thoracoscopy. The technical success rate of USLB was 96.0%, which means that in most cases, lung tissue can be successfully obtained. The 20 cases in which USLB could not obtain lung tissue were those of lung abscess, pneumonia, lung cancer and idiopathic interstitial pneumonia. In the cases of lung abscess, lung cancer or severe pneumonia, there could be a large range of necrosis, and USLB may fail to obtain enough lung tissue for a diagnosis. Similarly, in the case of severe idiopathic interstitial pneumonia, most lung tissue is replaced by fibrous connective tissue, and no useful lung tissue can be obtained. This weak point may be improved by contrast-enhanced ultrasound-guided biopsy so that the necrotic part can be shown and avoided. It is recommended that a second biopsy be performed if USLB gives a negative pathological result, but other examinations, such as CT or PET-CT, highly suspect the lesion to be malignant.

The USLB has high efficiency in the diagnosis of lung tumours. Only 20 cases of tumours were missed by USLB. Because some tumours can encompass a large range of necrosis and some are multicentric and mixed with infectious pulmonary consolidation, USLB may fail to obtain the proper tissue for pathological examinations. Multipoint puncture and contrast-enhanced ultrasound-guided biopsy may raise the positive rate for those cases.

Only one case of severe complications occurred during USLB. The patient experienced severe pulmonary haemorrhage, and 200 mL of blood was aspirated from the trachea. The patient was successfully rescued. No patients died because of USLB. The longest time of blood in the phlegm was 4 days. Eight patients had low fevers and were treated with antibiotics. Twelve patients had chest pain, which was relieved in 2 days. Six patients had pneumothorax, and one patient had delayed pneumothorax, which was found 8 hours after the procedure. The patient who had delayed pneumothorax was treated with thoracic close drainage and recovered in a week. Manual aspiration in the biopsy-side down position may reduce the rate of delayed pneumothorax according to a study (18). The other 5 patients with pneumothorax recovered in 1 week. Since the operator can avoid large bronchi during USLB with real-time vision, the incidence of pneumothorax was much lower than that of CT-guided lung biopsy [1.2% to 27.3% (11)]. Two patients experienced pleural reactions, including nausea, shortness of breath and cold sweat, and both recovered in 1 day. Therefore, USLB is relatively safe, but first-aid support is still needed in cases of emergency.

Our research has certain limitations. The retrospective design creates a risk for selection bias. Because of the retrospective characteristics, the variables selected in our study were not comprehensive. For example, not all lung tissue culture results of all patients could be obtained. The chest CT, ultrasound and clinical course before biopsy affect the priority the specimen submission, creating a large bias. A prospective study is needed to compare the efficiency of USLB with that of other methods.

USLB is a safe and effective method for diagnosing peripheral lung lesions with a high accuracy (82.0%) and low complication rate (9.0%). Lung tissue pathology and cultures have good diagnostic value for tuberculosis and fungi infections, especially in Cryptococcus neoformans and Aspergillus fumigatus infections. Lung tissue cultures can also diagnose many bacterial infections and can contribute to the selection of antibiotics.

Ethical Statement: The authors are accountable for all aspects of the work in ensuring that questions related to the accuracy or integrity of any part of the work are appropriately investigated and resolved. “The patients consented to publish their examination results and radiological images anonymously.” is the information approved by IEC of our hospital.