A 43-year-old man was referred to our hospital after computed tomography revealed a 2.5-cm mixed ground-glass opacity peripherally in the left upper lobe with spicular formation during his routine medical examination. No metastasis was found by positron emission tomography/computed tomography or brain magnetic resonance imaging preoperatively. His heart and lung functions were normal, and there was no contraindication for surgery. VATS left upper lobectomy was performed (Figure 1), and the intraoperative frozen section confirmed the diagnosis of adenocarcinoma. Subsequently, systematic lymphadenectomy was performed. 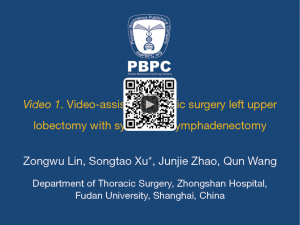 The patient was placed in the lateral decubitus position under general anesthesia with single lung ventilation provided by a double-lumen endotracheal tube. Thoracic epidural anesthesia was used. The surgeon and assistant stood on the dorsal and ventral sides of the patient respectively. Three ports were employed. The first port for the thoracoscope was located at the eighth intercostal space (ICS) on the midaxillary line, the second port was positioned on the triangle of auscultation regardless of the ICS, and the third port (3.5-cm long) was positioned on the fifth ICS between the anterior axillary line and midclavicular line.

First, the thoracic cavity was explored. There were no adhesions, pleural effusion, or pleural nodules observed. The lesion was located in the left upper lobe peripherally, with obvious pleural indentation. The posterior part of the oblique fissure was well developed, while the anterior part was not completed. The interlobar pulmonary artery could be seen from the oblique fissure.

Subsequently, the superior pulmonary vein and left upper bronchus were dissected and cut by an endoscopic stapler. All of the pulmonary artery branches of the left upper lobe were dissected and cut together using only an endoscopic stapler. Next, the left upper lobe was placed into a protective bag and removed from the thoracic cavity for subsequent frozen section examination. Based on the frozen specimen, lung adenocarcinoma with pleural involvement was confirmed, with no involvement of the edge of the bronchus observed.

Finally, when the fissure is completed and the lingual artery is adjacent to the anterior trunk, the branches of the left upper pulmonary artery can be cut together using an endoscopic stapler. If the branches are located far away from the same line, they can be treated separately. When dissecting the mediastinal lymph nodes, care should be taken to avoid clamping the lymph nodes as much as possible in order to avoid crushing them.