Lung cancer is the leading cause of cancer death worldwide. Non-small cell lung cancer (NSCLC) accounts for 85% of lung cancer cases (1). For advanced NSCLC with epidermal growth factor receptor (EGFR) mutation, EGFR tyrosine kinase inhibitors (EGFR-TKIs) serve as standard first-line therapies with a response rate of over 70% and a median progression-free survival (PFS) of 9–13 months (2,3). However, patients receiving the EGFR-TKI treatment almost inevitably develop disease progression due to primary or secondary drug resistance. The mechanism of resistance is complicated, with EGFR T790M accounting for approximately 50% of its emergence. Mesenchymal-epithelial transition amplification, epithelial-mesenchymal transition (EMT), and small cell transformation can also lead to drug resistance (4). Once tumor cells acquire the properties of EMT, their invasive ability and metastasis will be enhanced, thereby resulting in drug resistance (5).

We retrospectively reviewed patient records at the Cancer Center in the Shengjing Hospital of China Medical University between January 2016 and April 2018. Patients who met the following inclusion criteria were enrolled: (I) histologically or cytologically confirmed NSCLC; (II) recurrence or unresectable stage III or IV, according to the seventh edition of the tumor-node-metastasis (TNM) classification for lung cancer by the American Joint Committee on Cancer; (III) EGFR exon 19 deletion (E19 del) or exon 21 (E21) L858R mutation; (IV) received first-generation EGFR-TKI monotherapy; (V) HRCT imaging (256-section CT scanner, Brilliance iCT®; Philips Healthcare, Cleveland, OH, USA) and follow-up information before and after EGFR-TKI treatment was available. Patients were excluded if they had one of the following exclusion criteria: (I) received chemotherapy or other targeted therapy during EGFR-TKI treatment; (II) EGFR-TKIs were only used as consolidation or maintenance therapy; (III) harbored rare or co-mutated EGFR mutations; (IV) previously received EGFR-TKI treatment; (V) second- or third-generation EGFR-TKIs; (VI) had a history of chest radiotherapy before or during EGFR-TKI treatment.

HRCT imaging PIL features included ground-glass opacity, interlobular septal thickening, interstitial hyperplasia, honeycomb sign, reticulation, consolidation, patchy shadow, tractive bronchiectasis, and bullae (13,14). Referring to the HRCT features for usual interstitial pneumonia in the ATS/ERS/JRS/ALAT International Guidelines and previous studies of ILD (14-16), grading criteria for PIL based on chest HRCT imaging were proposed (Table 1 and Figure 1). Each patient’s PIL grade was independently verified by two chest radiologists, according to the chest HRCT before the EGFR-TKI treatment. In cases of disagreement between radiologists, another radiologist was consulted until a consensus was reached. 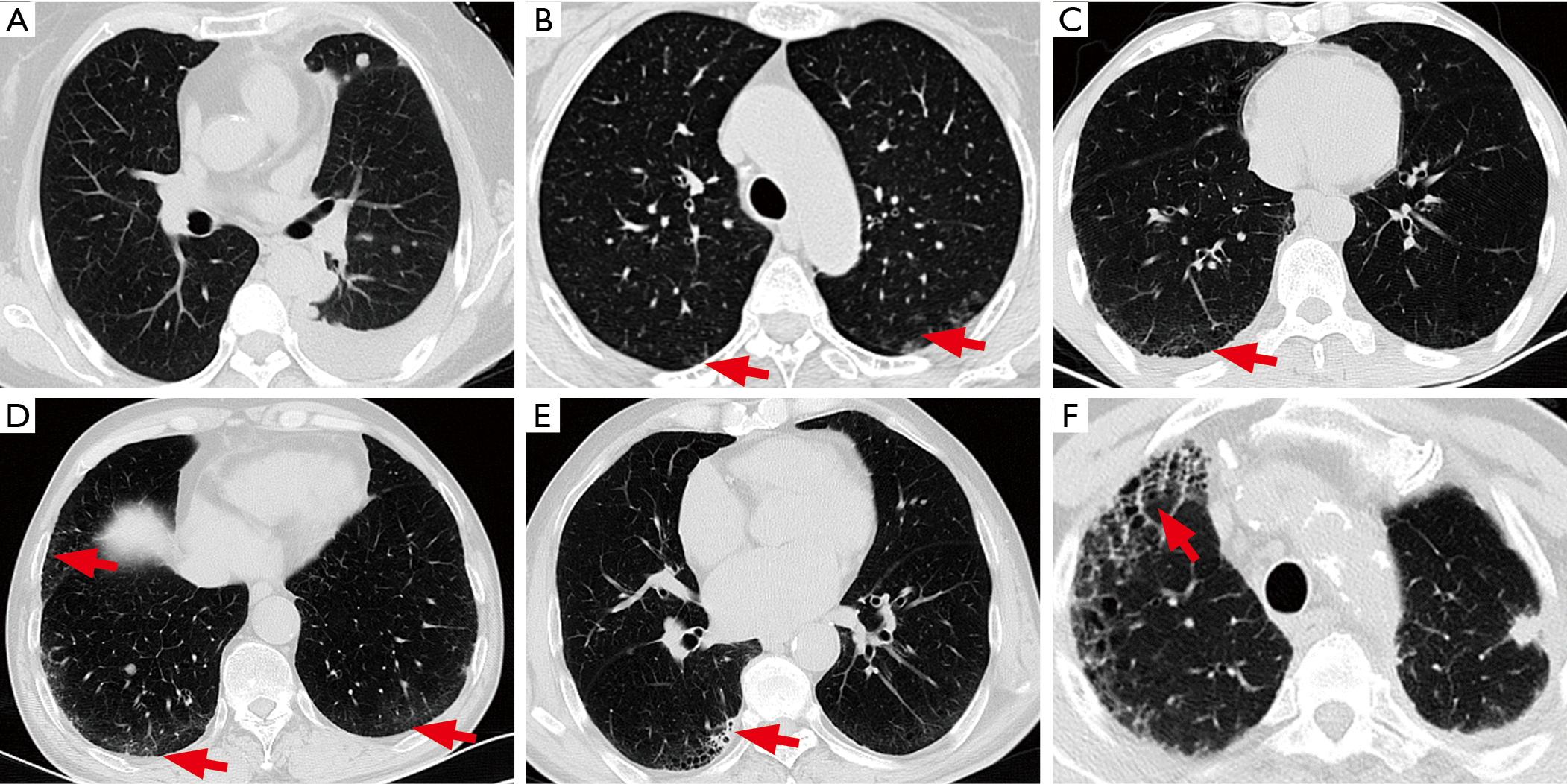 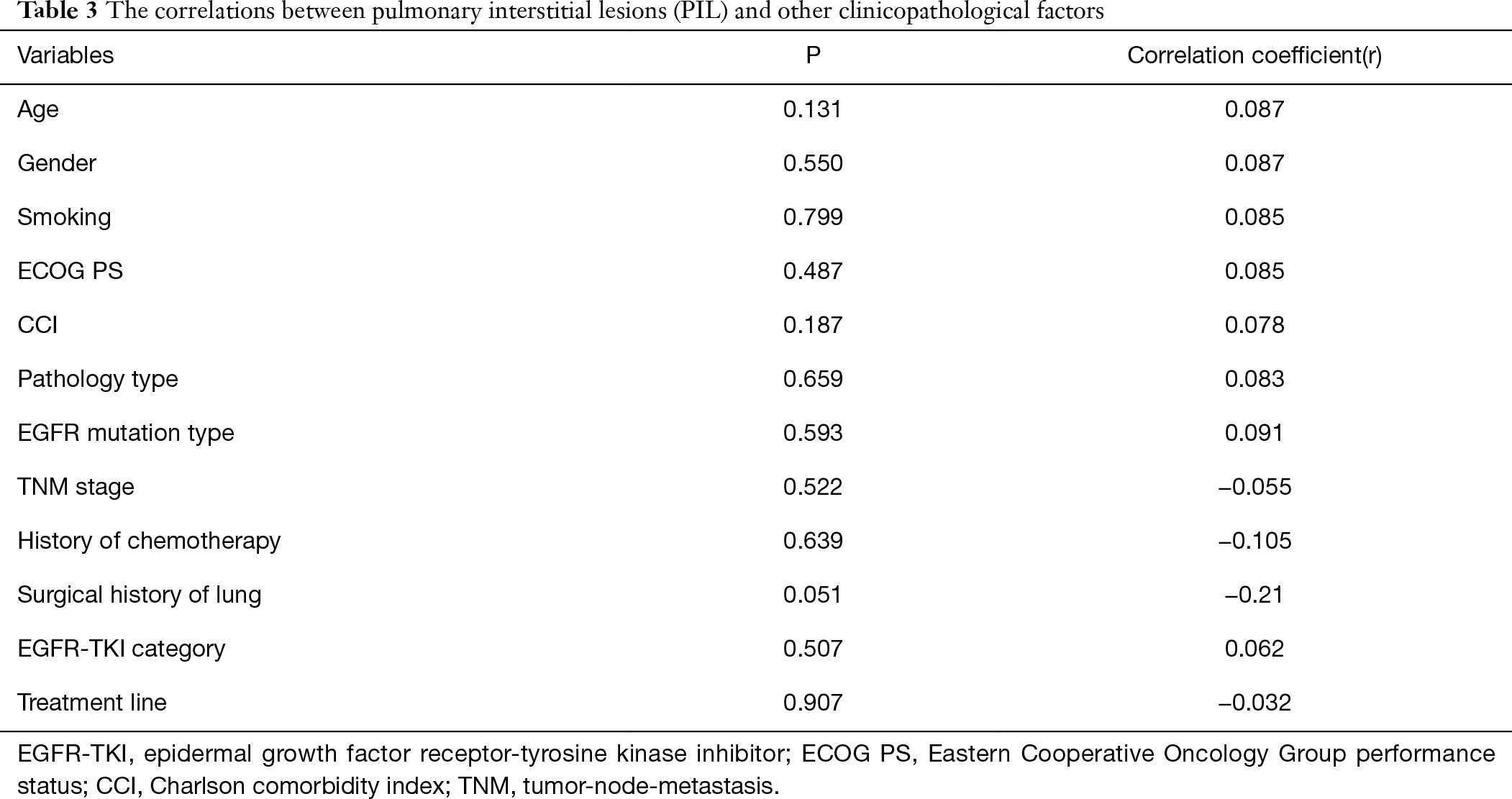 The objective response rate (ORR) and median PFS of the patients receiving EGFR-TKI treatment were 73.1% and 10.0 months (95% CI: 7.51–12.49), respectively. PFS rates for 1, 2, and 3 years were 45%, 20%, and 5%, respectively. Univariate analysis showed that sex, age, clinical stage, smoking history, ECOG PS, CCI, EGFR-TKI category, history of chemotherapy, and treatment lines were not significantly associated with PFS (P>0.1 for all). In turn, pathological type, EGFR mutation type, surgical history of lung cancer, and PIL grade were associated with PFS (P<0.1 for all). 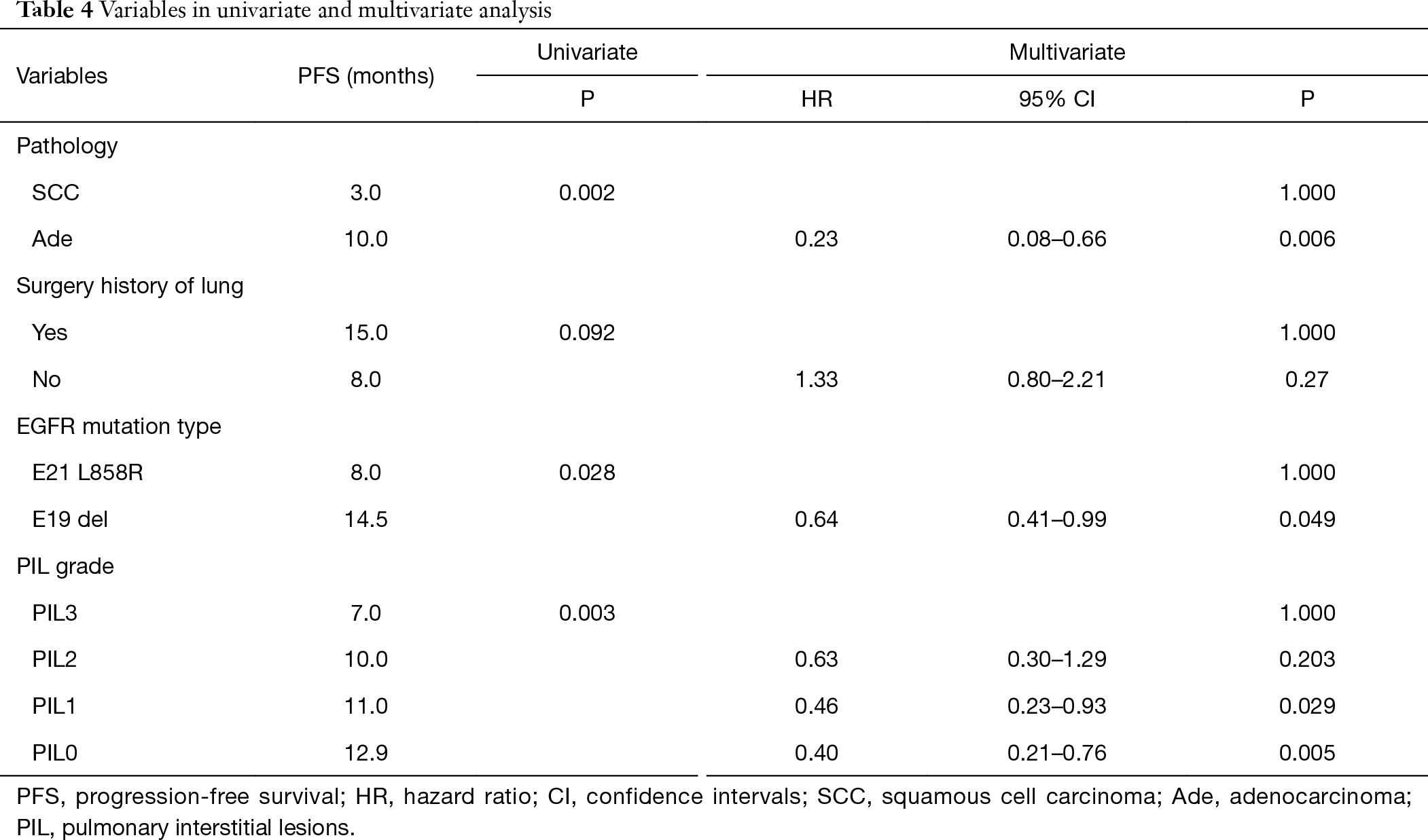 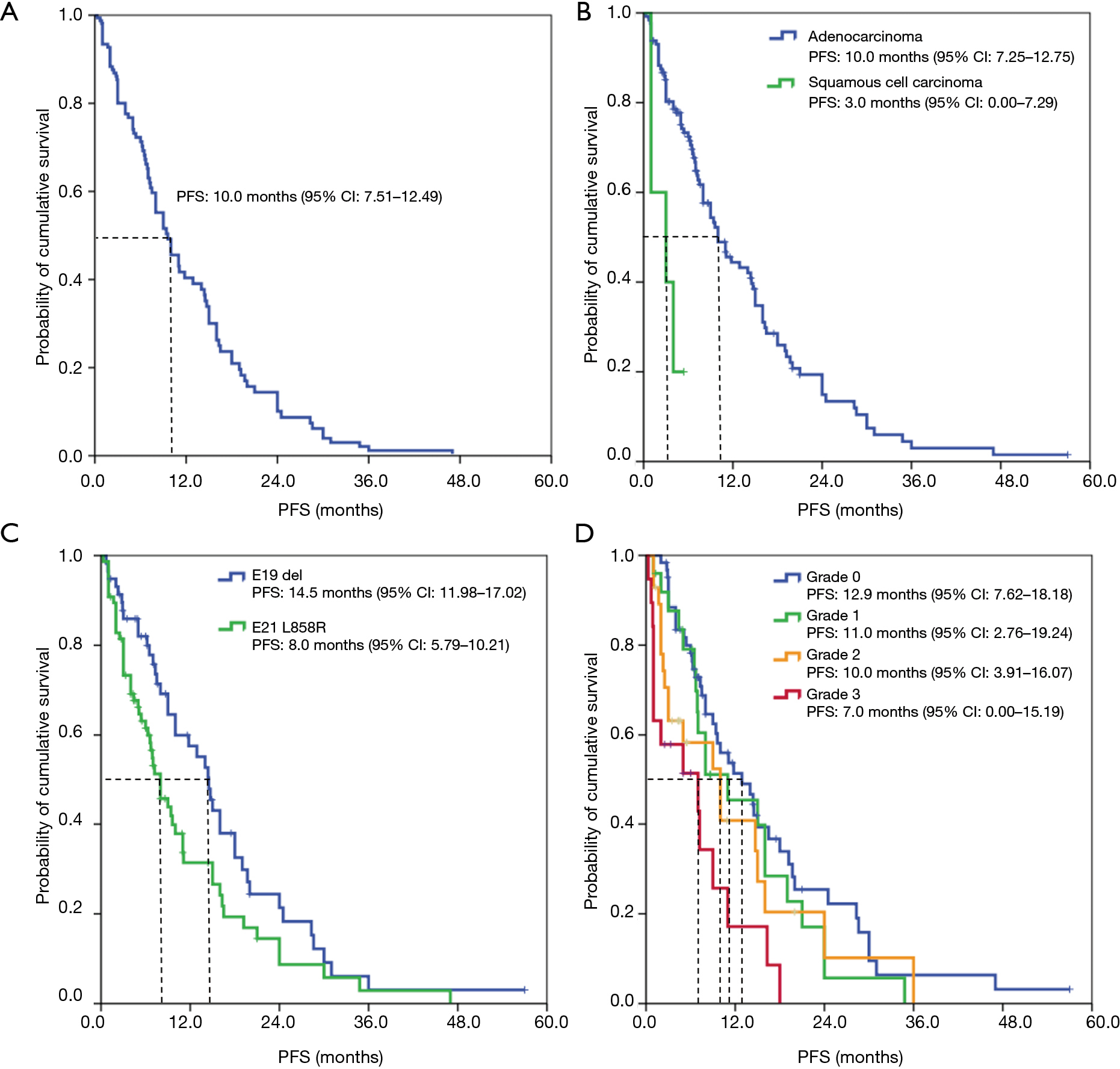 EGFR-TKIs greatly improve survival and quality of life for patients with EGFR-mutant advanced NSCLC. However, acquired drug resistance impedes long-term clinical benefits and poses new challenges for treatment. Moreover, the time and patterns of recurrence among individuals are not the same. This study investigated the relationship between pre-existing PIL and EGFR-TKI resistance. The results showed that pre-existing PIL grade was an independent risk factor besides pathological type and EGFR mutation type for predicting disease progression in patients with EGFR-mutant advanced NSCLC treated with EGFR-TKIs. It suggested that the presence of higher PIL grade before EGFR-TKI treatment implied shorter PFS, which might be related to early resistance to EGFR-TKIs.

Epidemiological data shows that the incidence of lung cancer in patients with pulmonary interstitial fibrosis is 3.34–7.30 times higher than in healthy people and that pulmonary interstitial fibrosis is considered an independent risk factor affecting prognosis and survival (10-12,17,18). A retrospective analysis reported by Kanaji et al. showed that in advanced NSCLC patients who received first-line chemotherapy or EGFR-TKI treatment, median PFS was significantly shorter in patients with ILD (118 days) or idiopathic pulmonary fibrosis (92 days) than in those with non-ILD (196 days) (19). A previous study has shown that alveolitis was the earliest manifestation of ILD in pathology, mainly presenting as ground-glass opacity in HRCT (20). Reticulation was defined as small linear opacities that represent thickened intralobular or interlobular septa (14), while honeycomb signs represented end-stage parenchymal fibrosis (16). Therefore, the present study classified PIL into grades 0 to 3 according to HRCT manifestations of the range and extent of ground-glass opacity, abnormal reticulation, and honeycomb signs in both lungs. The findings indicated that higher PIL grade was associated with shorter PFS, leading to earlier acquired EGFR-TKI resistance. Median PFS was only 7.0 months in patients with PIL grade 3 vs. 12.9 months in those with PIL grade 0, suggesting that PIL grade may be a predictor of early resistance to EGFR-TKIs.

The mechanisms of EGFR-TKI resistance are complex. Preclinical studies have shown that EMT plays an important role in both the EGFR-TKI resistance and formation of pulmonary fibrosis (5,6). TGF-β is the main inducer in the process of EMT and is highly expressed in patients with ILD (7,8,17). Persistent exposure to TGF-β1 is necessary for tumor cells to maintain their mesenchymal phenotype and the state of EGFR-TKI resistance (21). Progression and completion of EMT processes are associated with cell invasion and drug resistance (22). EMT is a process in which epithelial cells lose their polarity and adherence, while gaining migratory ability and adopting a mesenchymal phenotype, manifesting as a loss of E-cadherin and accompanied by an increase in N-cadherin, vimentin, and fibronectin expression (6). In vitro studies have reported that NSCLC cells resistant to gefitinib exhibit EMT features and their mesenchymal phenotype is more resistant than the epithelial phenotype (23). With these results in mind, it is possible that there might be different expression levels of TGF-β or EMT-related proteins in pulmonary interstitial and serum of lung cancer patients with different PIL grades, which may be related to acquired resistance to EGFR-TKIs. Specific mechanisms are being studied to provide more effective predictors or monitoring indicators for early clinical evaluation of the EGFR-TKI efficacy.

EGFR-TKI-induced ILD is a rare but severe adverse effect, which may exacerbate pulmonary fibrosis, leading to a life-threatening acute event. The incidence of ILD with EGFR-TKIs is about 1.2–6.5% and the mortality rate is 13.0–40.0% among EGFR-TKI-treated patients with ILD, mostly occurring within 4 weeks of treatment initiation (24-27). Johkoh et al. reported that ILD exacerbation occurred in 10.6% of the erlotinib-treated patients (24). In the present study, on the basis of clinical and radiological manifestations, no patients experienced acute exacerbation of pulmonary fibrosis and resulting treatment interruption regardless of PIL grade. No lethal ILD outcomes were observed at the end of the last follow-up.

Furthermore, based on the conclusion between pre-existing PIL grade and resistance to EGFR-TKIs, we speculate that the combination of EGFR-TKIs and anti-pulmonary fibrosis agents might delay or prevent the onset of EGFR-TKI resistance. Nintedanib is a triple angiokinase inhibitor that binds to the intracellular tyrosine kinase domain of angiogenesis-related receptors, including FGFR, PDGFR, and VEGFR. In vitro cell experiments have demonstrated that nintedanib can inhibit early TGF-β1 signaling transduction events, downregulate expression of fibronectin, and inhibit the differentiation of myofibroblast (28). Of note, nintedanib is also able to inhibit TGF-β1-induced phenomena of increased vimentin and decreased E-cadherin expression in A549 cells, while reversing TGF-β1-induced EMT and resistance to gefitinib (29). However, there are few clinical trials on combination therapy with nintedanib. In the LUME-Lung 1 controlled trial, docetaxel and nintedanib group significantly improved overall survival in the second-line treatment of lung adenocarcinoma compared to docetaxel and placebo group (12.6 vs. 10.3 months) (30). In a phase I clinical trial assessing the efficacy of afatinib combined with nintedanib, the disease control rate in 18 NSCLC patients was 83%, with one complete response and three partial responses (31). Thus, whether EGFR-TKIs in combination with nintedanib can delay the emergence of acquired drug resistance in patients with pulmonary interstitial fibrosis, especially with higher PIL grades, remains to be studied further.

This study also found that patients with E19 del had a significantly better PFS than those with E21 L858R (14.5 vs. 8.0 months), which is consistent with previous studies (39,40). A meta-analysis showed that treatment with EGFR-TKIs compared to chemotherapy was significantly associated with a 63% reduction in the risk of disease progression or death. For tumors with E19 del, the benefit was greater than for tumors with E21 L858R, with unadjusted pooled HR of 0.26 and 0.45, respectively (41).

There are some limitations to this study. First, this was a single center retrospective study with a limited number of cases that needs to be validated by well-designed prospective studies. Second, the enrolled patients received different first-generation EGFR-TKIs. Although multiple randomized controlled trials have suggested that there is a small difference in efficacy among gefitinib, erlotinib and icotinib (42), the difference in efficacy caused by the drug itself will be magnified due to the study’s small sample size. Third, HRCT cannot completely distinguish atypical interstitial-like manifestations from other lung diseases (e.g., atypical adenomatous hyperplasia, adenocarcinoma in situ, and minimally invasive adenocarcinoma) and even misdiagnose physiological gravity-dependent opacification as pulmonary interstitial diseases, although dynamic follow-up CT can help identify these conditions to some extent. In the present study, radiologists reached a consensus on diagnosis and grade of PIL according to baseline HRCT before treatment or in combination with review of follow-up CT (if needed) to minimize diagnostic errors.

Our study suggested that pre-existing PIL might affect the efficacy of EGFR-TKIs in patients with advanced EGFR-mutant NSCLC. The higher the PIL grade, the shorter the PFS, which is related to early resistance of the EGFR-TKI treatment. Further clinical trials are needed to verify whether the combination of EGFR-TKI and anti-pulmonary fibrosis drugs can delay or prevent the occurrence of EGFR-TKI resistance.

Funding: This study was supported by grants from the National Natural Science Foundation of China (grant number 81501990).

Ethical Statement: The authors are accountable for all aspects of the work in ensuring that questions related to the accuracy or integrity of any part of the work are appropriately investigated and resolved. This study was approved by the Institutional Review Board of Shengjing Hospital of China Medical University (No. 2015PS167K). The requirement for patient consent was waived because this was a retrospective cohort study.