The treatment of type2 diabetes mellitus (T2DM), especially metformin, has been proved by numerous studies in recent years to improve the survival of patients with malignant tumors (7-10). For patients with esophageal squamous cell carcinoma (ESCC), many molecular mechanisms have been proved that metformin can inhibit tumor progression (11-13). However, the inhibitory effect of metformin on ESCC lacks direct follow-up observation with big data. Another point to ponder is whether metformin has a consistent tumor-suppressing effect in all patients with ESCC.

In this study, we first used a large sample to re-examine the effect of type 2 diabetes on ESCC survival outcomes. Since metformin is believed to improve the survival of some cancer patients, we conducted subgroup analysis to further investigate whether the relationship between T2DM and ESCC outcome is related to metformin.

The institutional review board of five hospitals involved in this study approved this study. All subjects involved in the study provided informed consent. Briefly, we collected patients with newly diagnosed ESCC pathologically from 2008 to 2013.All patients underwent surgical resection. Basic information (including age, sex, smoking status, alcohol consumption, BMI) was collected by consulting inpatient medical records. Phone or email to collect follow-up data. The follow-up data were completed with the assistance of the household registration department and hospitals. The data collection route is shown in Figure 1. 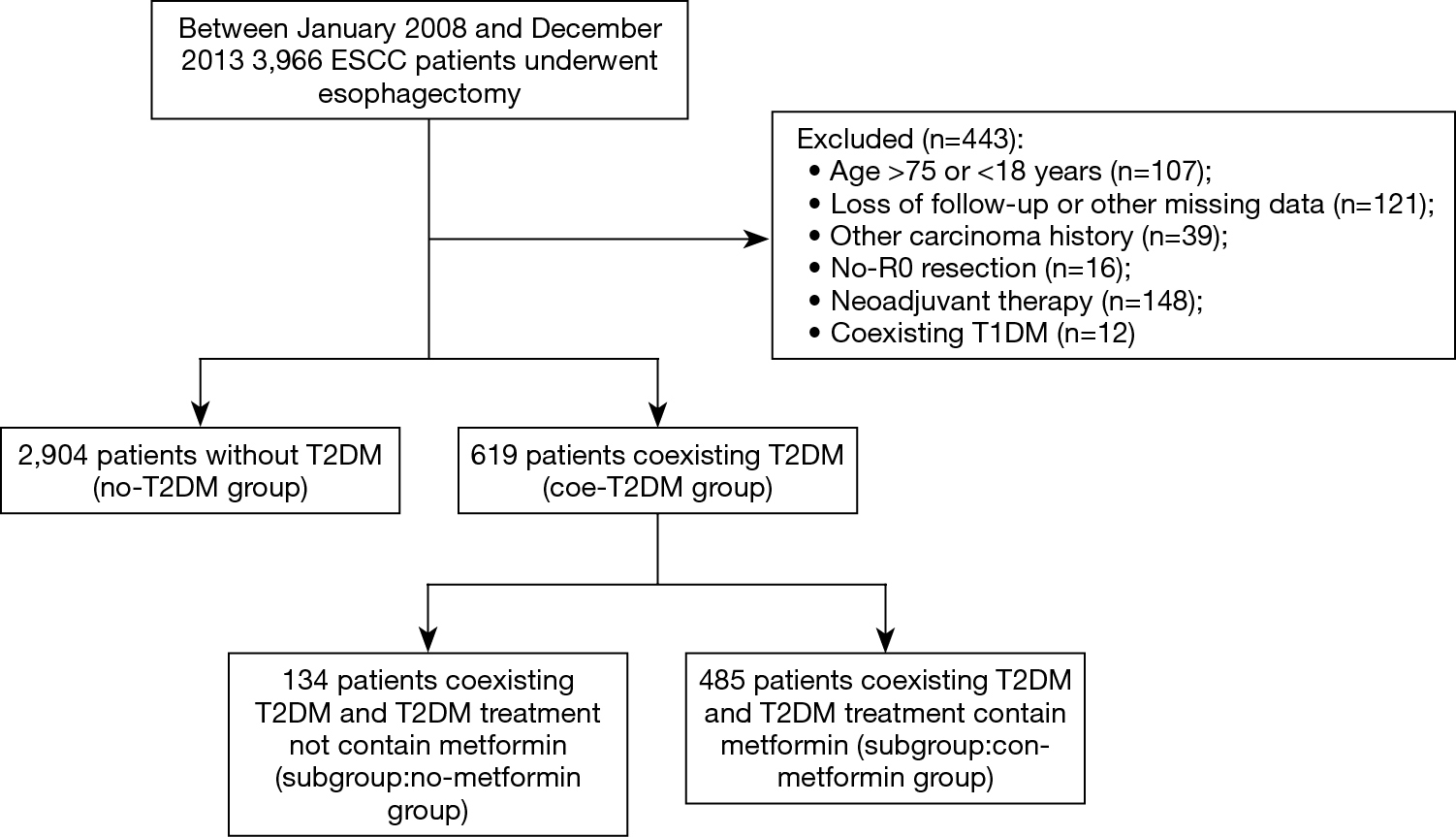 Data were compared across subgroups using OS and DFS, Informed consent Associations between T2DM and outcomes were estimated using the method of Kaplan-Meier to generate survival curves and assessed using the log-rank tests. Cox proportional hazards models were used as primary analyses, adjusting for age, gender, stage, performance status, smoking status and drinking status, and BMI. The same method was used to evaluate the associations between metformin use and outcomes for patients ESCC with T2DM. Factorial design was using to evaluate whether two factors interact. All reported P values are from two-sided tests. P value less than 0.05 was considered statistically significant. All statistical analyses used SPSS software version 20.0.

Finally, 3,523 ESCC patients were included in this study, and 2,432 patients relapsed and 2,396 died within 5 years after surgery. The mean follow-up time for these patients was 39.2 months (1.9–72.0 months). The 5-year OS and DFS of those patients included in this study were 31.99% and 30.97%, respectively. Gender, smoking status and drinking status were significantly different between ESCC with T2DM and without T2DM. For ESCC with T2DM patients, divided into two subgroups by the absence versus presence of metformin use. Gender, smoking status, drinking status, and TNM stage were no significantly different between these two subgroups. General information and clinical treatment of all patients were shown in Table 1. 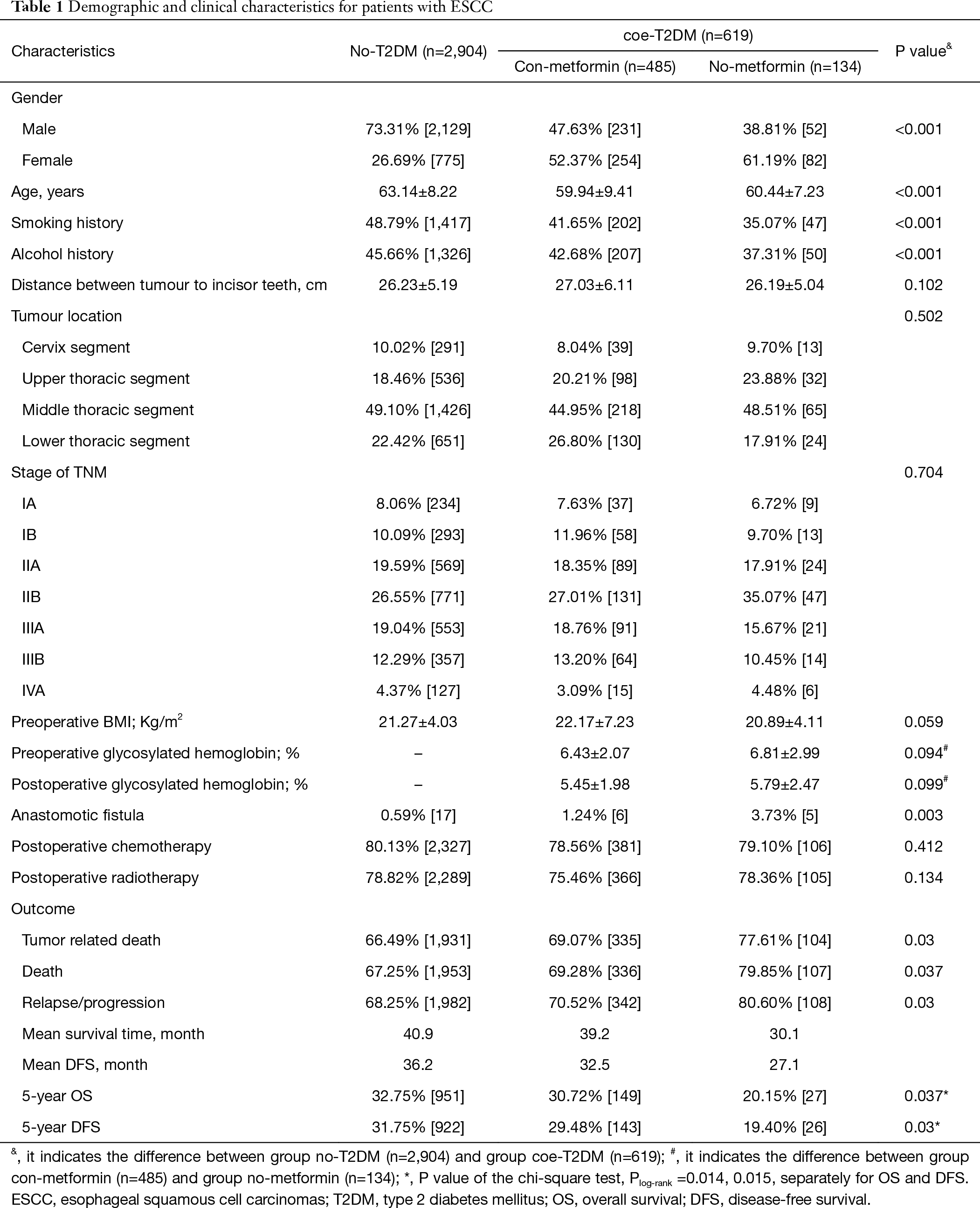 Relationship between T2DM and OS and DFS 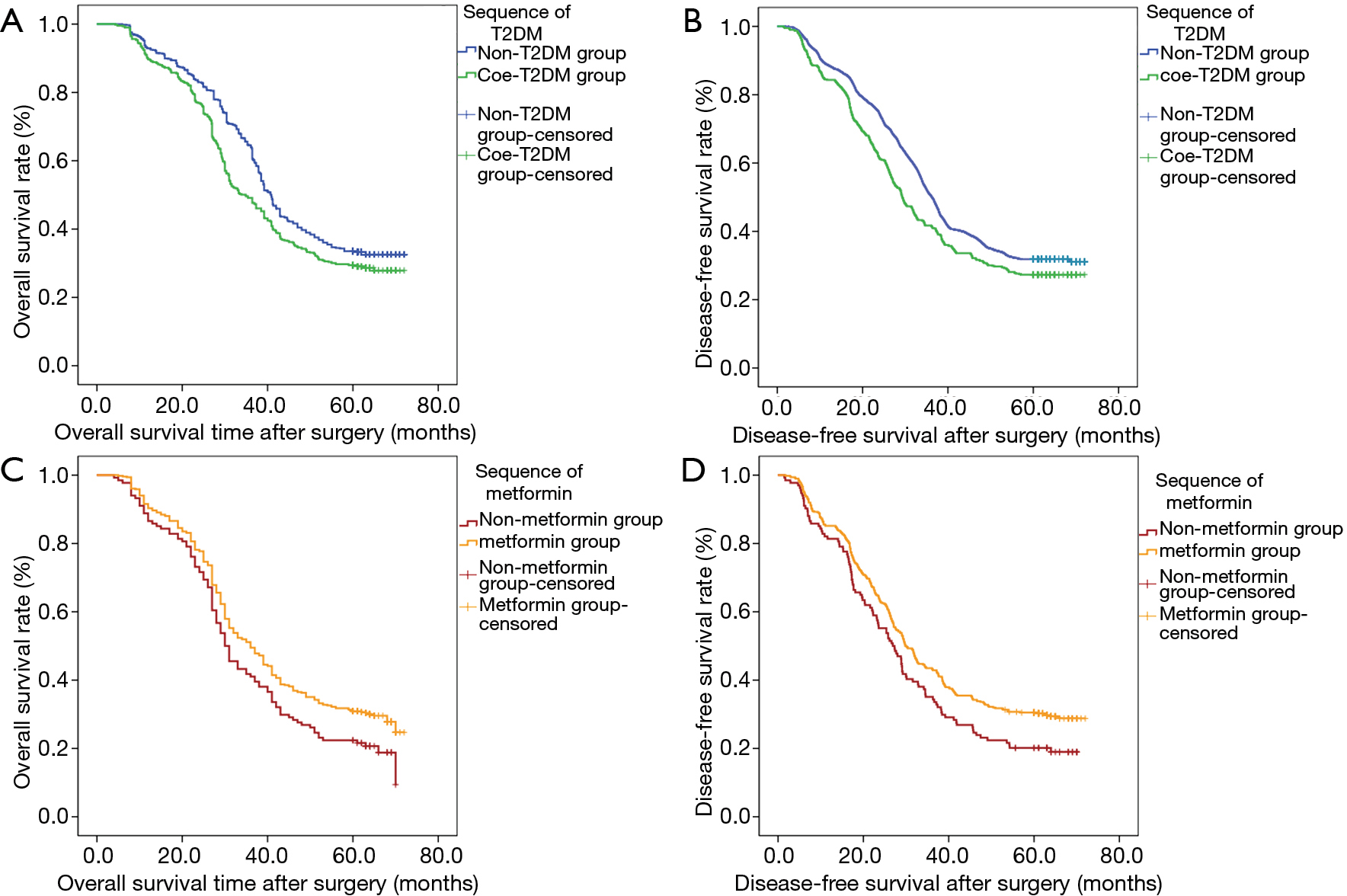 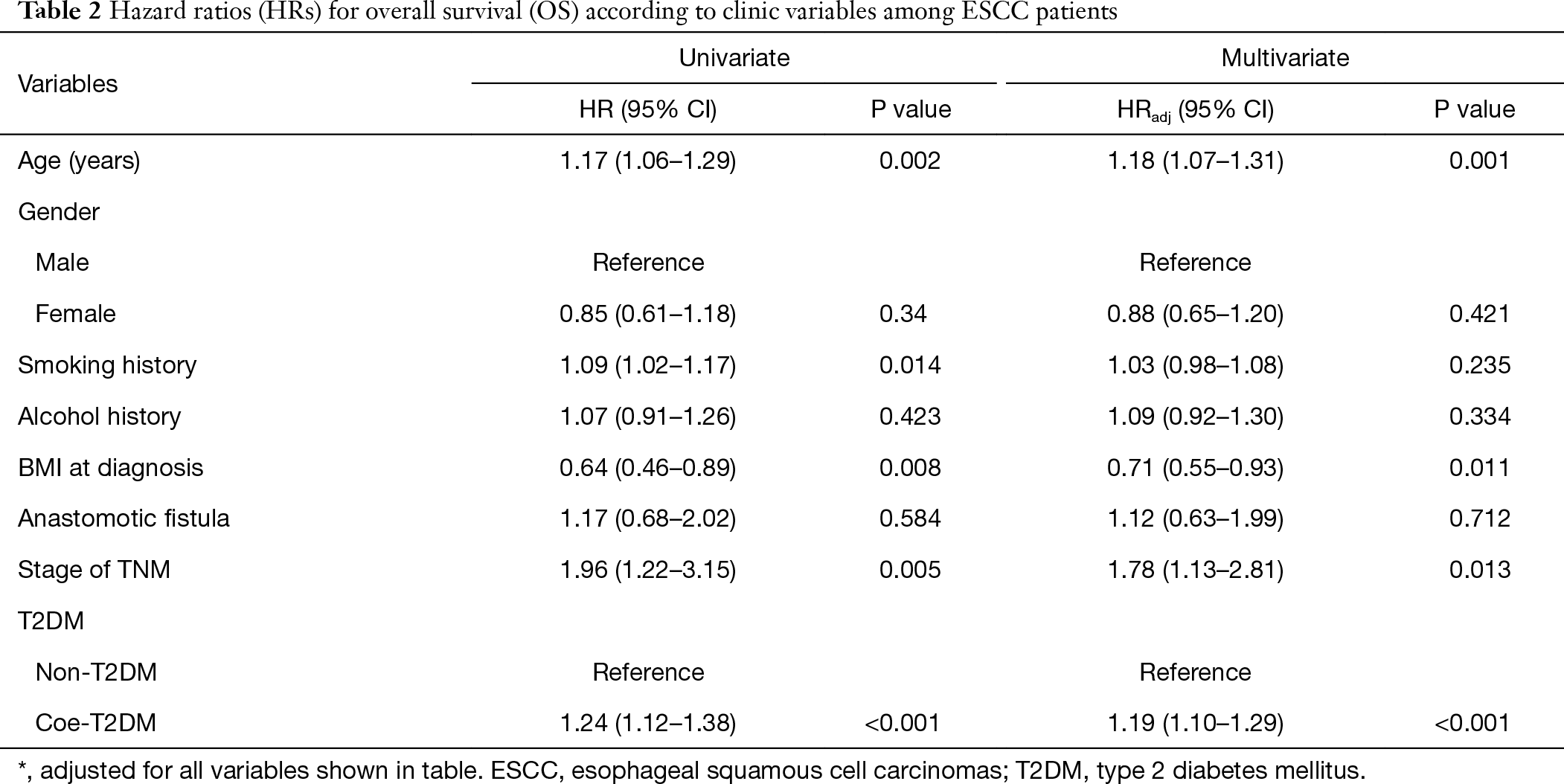 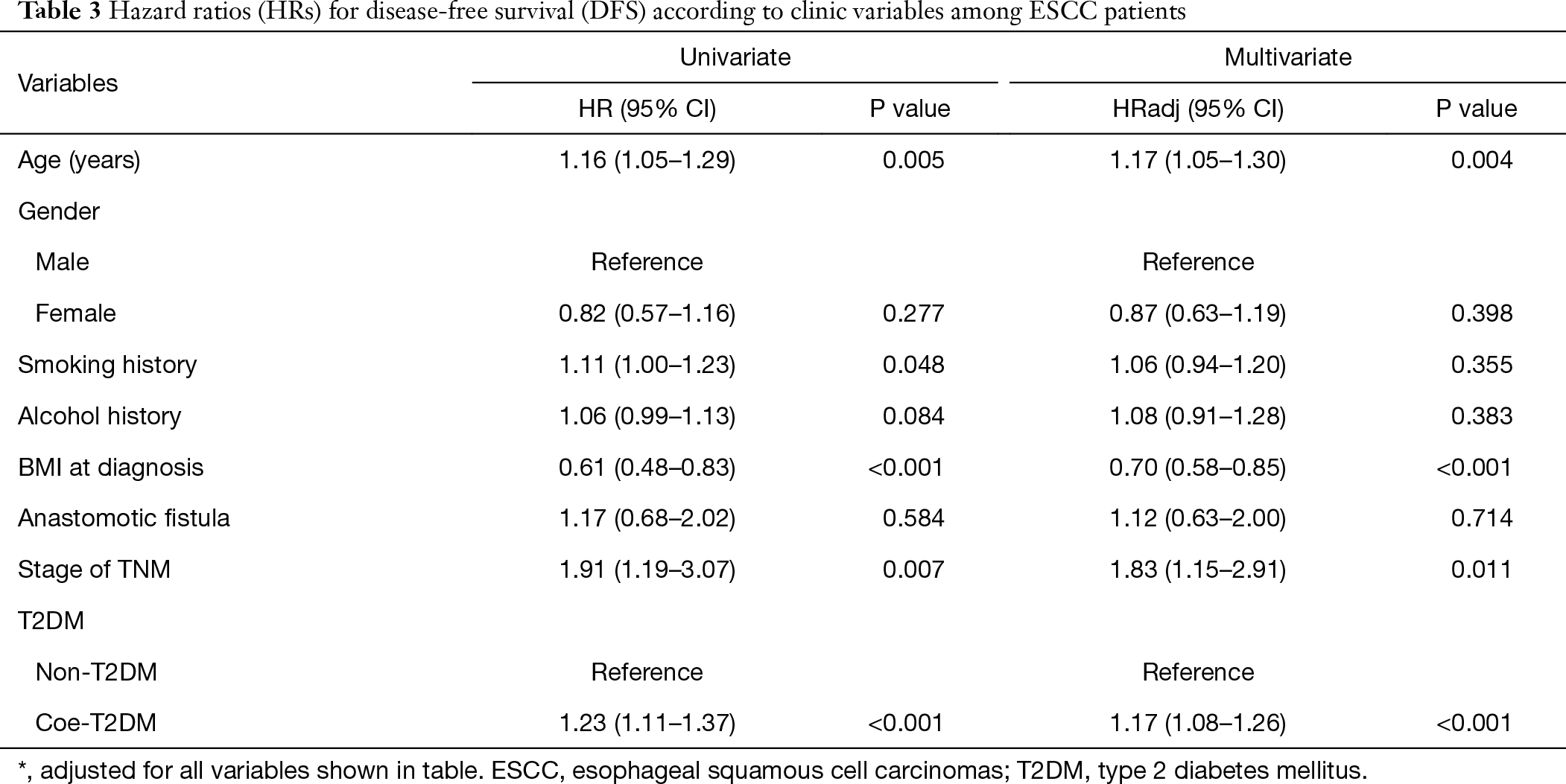 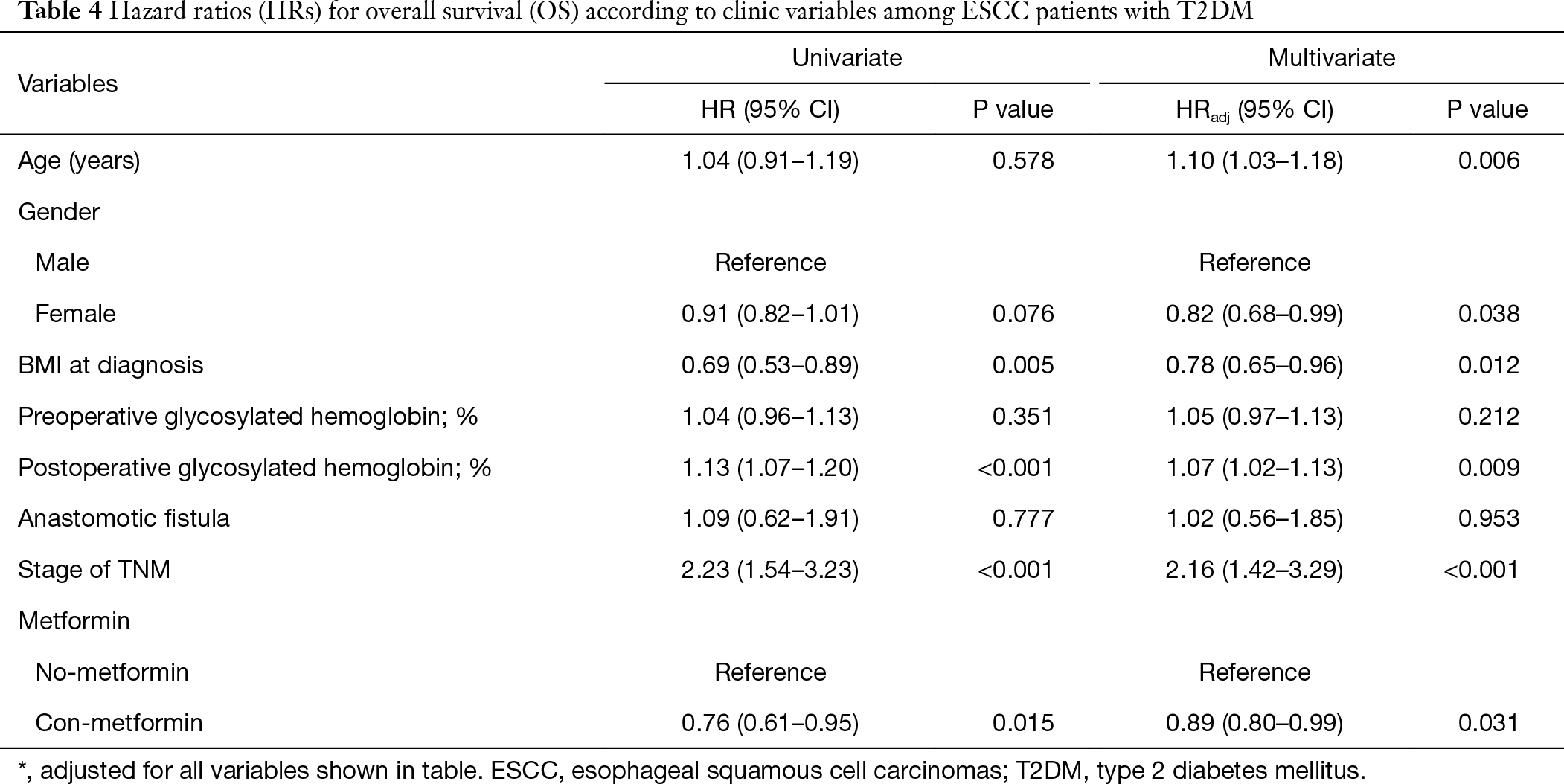 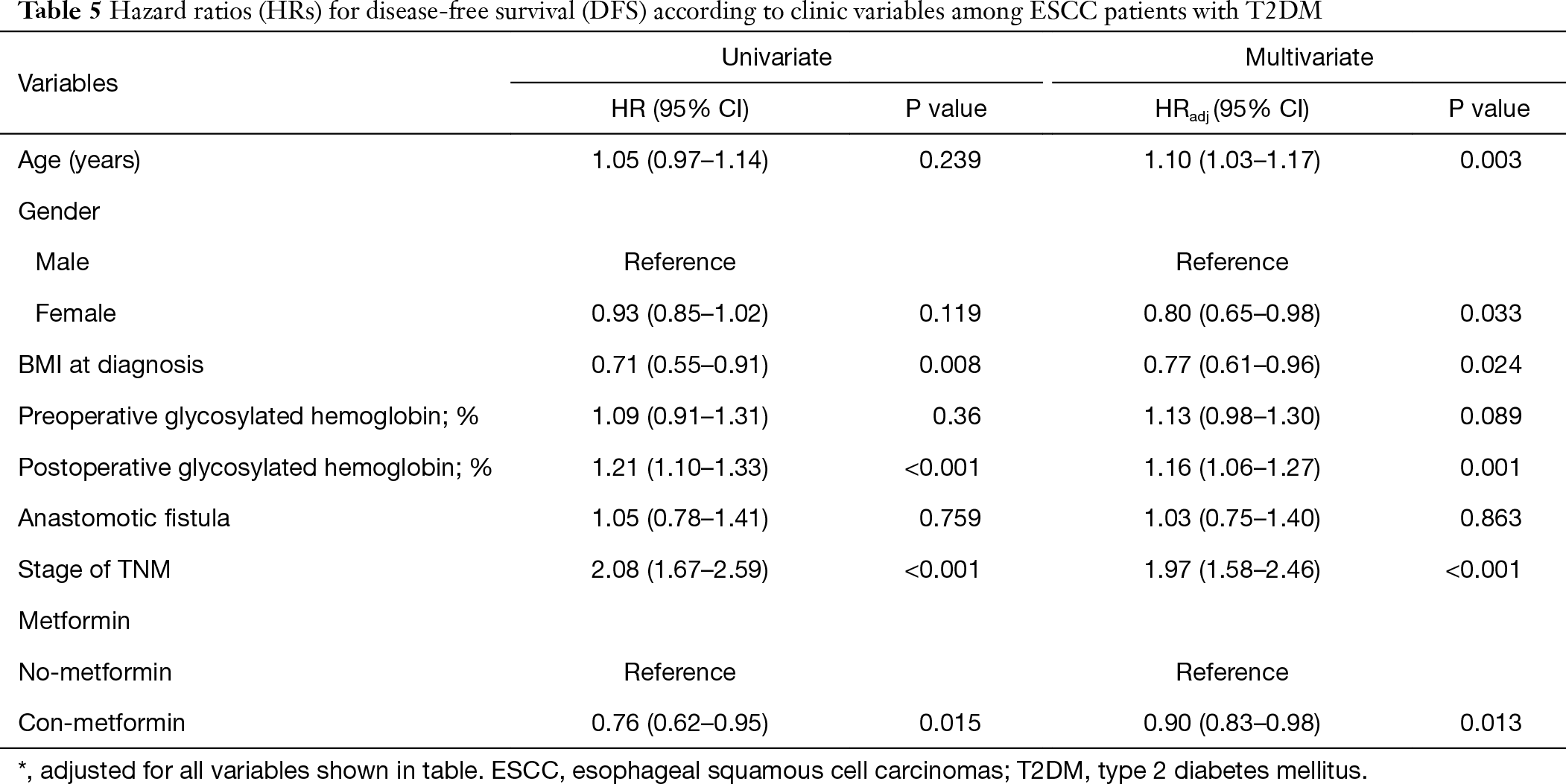 Because of the complex pathogenesis and early symptoms are atypical of ESCC, most patients are in the progressive stage at the time of diagnosis (14). Although the treatment has been improving, including surgery and comprehensive treatment, the prognosis is still very unsatisfactory (15).

In recent years, many studies have found that the drugs used for some chronic diseases may affect the prognosis of tumors (16). Diabetes is considered to be one of the causes of esophageal cancer (5). Meanwhile, as one of the conventional drugs for diabetes treatment, metformin has been proved to improve the prognosis of patients by improving the pathological remission rate of neoadjuvant therapy for esophageal cancer (17).

Metformin is one of the most widely prescribed glucose-lowering agents for treatment of type 2 diabetes mellitus (T2DM) due to its superior safety profile and few side effects such as lactic acidosis and hypoglycemia (18). It has the dual effect of reducing the body weight and blood glucose of obese patients (19), making it one of the preferred drugs for obese T2DM patients. However, both obesity and diabetes are risk factors for tumorigenesis (1,5,20,21), does metformin reduce tumor incidence by reducing the patient’s weight or by controlling the patient’s diabetes? It has not been confirmed. Previous studies have elucidated this mechanism from a molecular biological perspective (10,13), but there is a lack of large sample multicentric clinical observations.

In previous clinical studies, the effect of metformin on the prognosis of esophageal cancer is controversial. Some studies have shown that metformin does not improve the prognosis of patients with esophageal cancer and may even weaken the efficacy of chemotherapy drugs (22,23). However, Sekino (12) prompt that metformin showed antitumor effects by inhibiting cell proliferation, tumor growth and Epithelial-mesenchymal transition (EMT) and inducing apoptosis in ESCC cell lines and xenograft models. These effects may have been induced by inhibiting NF-kB activation on ESCC. In addition to, Damelin et al. (23,24) show that the copper-bis (thiosemicarbazones), Cu-ATSM and Cu-GTSM, which are trapped in cells under reducing conditions, cause significant ESCC cytotoxicity, both alone and in combination with metformin.

The continuous development of molecular biology research provides impetus and theoretical support for us to carry out this multi-center and large-sample retrospective study.

Based on these previous studies, our study first confirmed that T2DM is indeed an independent risk factor for the prognosis of patients with ESCC through large sample data, and the combination of T2DM will indeed bring a worse prognosis, which is consistent with previous studies (1,5,25). In the stratified analysis, metformin was found to provide significant survival benefits for ESCC with T2DM patients. Of course, by looking at the K-M curve, we also found that metformin improved the prognosis of patients withT2DM with ESCC, this improvement did not seem to offset the risk of T2DM itself (Figure 3A,B).

As a retrospective study, this paper has insuperable limitations. First, we missed the data of postoperative BMI changes of ESCC patients. The BMI mentioned in this study is patient’s BMI at the time of diagnosis. Most patients with esophageal cancer will lose weight after surgery (26), and metformin will also reduce the weight of diabetic patients, which will directly affect the recurrence of tumor. Therefore, the relationship between ESCC, metformin and weight change are worth further study. Secondly, fasting and postprandial blood glucose monitoring are the direct methods to compare blood glucose control in patients with diabetes. However, such data are missing in our study. HbA1C can only reflect the overall control of blood glucose in recent months, and cannot accurately reflect the fluctuation of blood glucose. Does metformin bring better prognosis to patients because of better blood glucose control in patients with esophageal cancer after surgery (1)? Thirdly, how does the endocrinologist decide whether to use metformin in the treatment of diabetes, and will these conditions affect the prognosis of patients? Fourthly, the anticancer effect of metformin may be related to the synergistic effect of other drugs, which has been confirmed by other studies (23,27,28). However, our retrospective study lacks the use record of other drugs when taking metformin. Finally, the biggest doubt for ours, whether ESCC without T2DM patients can benefit from metformin? Our team is applying to the ethics committee to conduct a multi-center, large-sample, prospective, randomized clinical study to address the above questions.

Coexisting T2DM is associated with worse survival outcomes in ESCC patients, and metformin may improve the prognosis of these patients.

We thank patients for their participation in this study. We also thank the team of TWM for data management and assistance to this project, and thank my good friends Hong Liu (MD, PHD) and Jiaxi He (MD, PHD) gave me guidance in writing the article.

Conflicts of Interest: JH serves as the unpaid Executive Editor-in-Chief of Journal of Thoracic Disease. The other authors have no conflicts of interest to declare.

Ethical Statement: The authors are accountable for all aspects of the work in ensuring that questions related to the accuracy or integrity of any part of the work are appropriately investigated and resolved. The study was approved by the ethics committee of the first affiliated hospital of Guangzhou medical university, and ethics committee of all participating institutions agree to implement.