With the increase of pollution and a growing smoking population, the incidence of lung cancer has increased (1). For most patients with advanced stage lung cancer, treatment is difficult, prognosis is poor, chemotherapy sensitivity is low, and the mortality rate is very high (2). Non-small cell lung cancer (NSCLC) accounts for about 80–85% of all pathological types. Along with the development of molecular detection technology, precision medicine requires individualized diagnosis and treatment. The epidermal growth factor receptor (EGFR) gene has been identified as the driving gene of non-small cell lung cancer. EGFR is the most common driver gene in East Asians, accounting for about 50% of cases. The EGFR gene mutation in patients with EGFR-TKI has a good curative effect, and the average progression-free survival (PFS) is 9–13 months (3,4). Although the majority EGFR-mutant NSCLC patients have a good response to EGFR-TKI initially, drug resistance is inevitable. It has been confirmed that there are many mechanisms of acquired resistance to EGFR-TKI, among which the secondary EGFR substitution of threonine to methionine at position 790 (T790M) mutation accounts for about 50% (5,6). The third-generation of EGFR-TKI has significant efficacy in advanced T790M-positive NSCLC patients (7,8). Therefore, it is necessary to clear the gene status of T790M in patients with acquired drug-resistance after the first generation of TKI drug treatment, as it can indicate the direction of subsequent treatment.

To detect if patients are harboring the T790M mutation, tissue biopsy specimens for molecular testing is accepted as the gold standard, but it is invasive and has several limitations, such as the occurrence of complications, poor quantity of sample and quality, repeat biopsy, and tumor heterogeneity. Liquid biopsy that collects plasmas pecimens offers a noninvasive approach that can be acquired in almost all clinical situations. Research shows it contains tumor genome information, and among them, cell-free DNA (cfDNA) is the most stable and easily available source (9). Liquid biopsy can be used for the diagnosis and evaluation of resistance mechanisms.

The objective of this study was to investigate the positive rate of plasma test T790M mutation and its relationship with different clinical characteristics and the frequency of T790M mutation in advanced EGFR-mutant NSCLC patients with acquired resistance after first line EGFR-TKI treatment.

This study was a prospective, single-center study at Taizhou Hospital in Zhejiang Province. We recruited patients from September 2017 to June 2018. The eligibility criteria included the following: (I) aged 18 years or older, with histologically confirmed NSCLC stage IIIB/st (10) with EGFR mutation positive in initial tissue detection, and who were unable to undergo operation or had recurrence after operation; (II) progressive disease (PD) after first generation EGFR-TKI by RECIST, with PFS >3 months confirmed by RESIST V1.1 (11); (III) no third generation TKI treatment.

All patients signed the informed consent, and 10 mL of blood was taken to assess the presence of the T790M gene by amplification refractory mutation system (ARMS) according to the manufacturer’s instructions (Amoy Diagnostics Co., Ltd., China).

The study was approved by the Institutional Ethics Committee of Taizhou Hospital (ethical batch number: 201637). 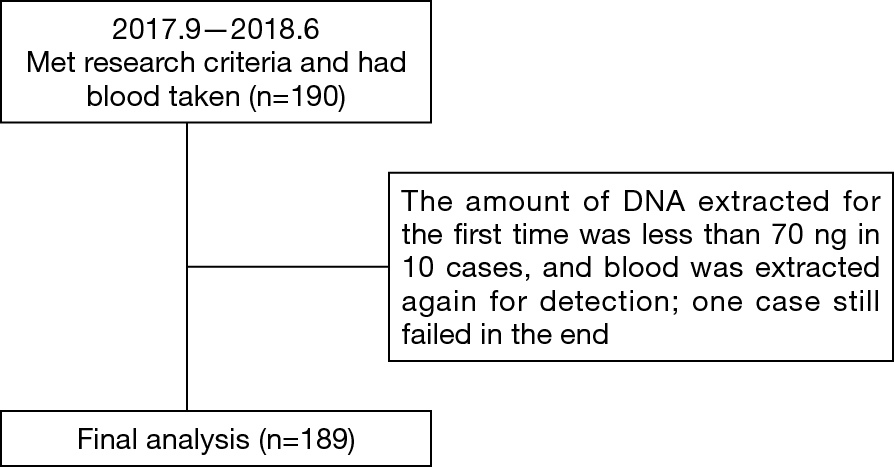 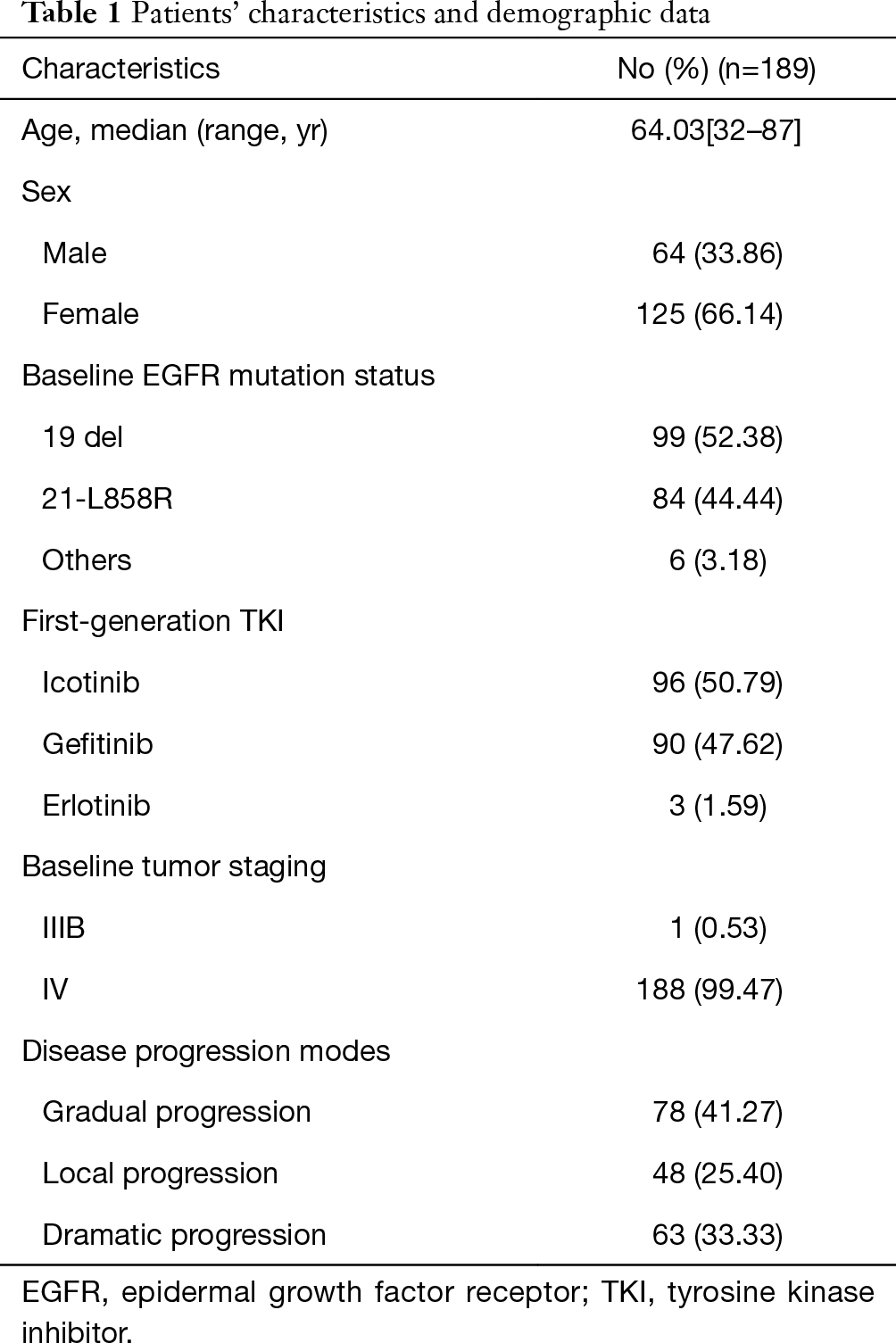 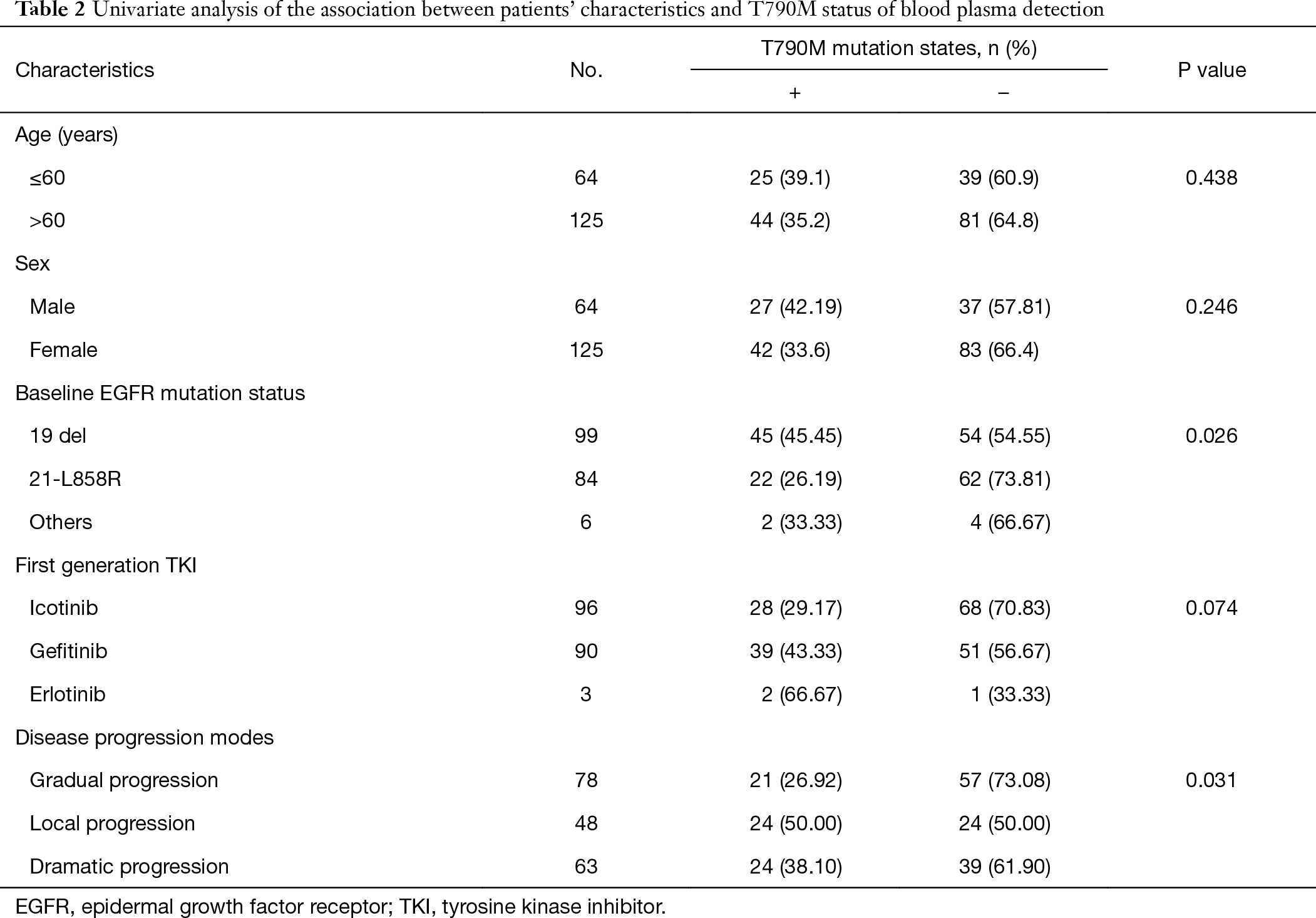 With the development of molecular detection technology, it has been confirmed that the EGFR gene is the driving gene of lung cancer, and EGFR mutation positive is considered a predictor for EGFR-TKI efficacy. For NSCLC-EGFR mutation patients, EGFR-TKI has high efficiency and low toxicity side effects, but drug resistance is inevitable. Secondary EGFR mutation has been confirmed as the most common mechanism of acquired resistance to EGFR-TKI, with the T790M mutation accounting for about 50% of cases (4,6). In recent years, it has become clear that NSCLC patients with positive T790M mutation have a high response rate (about 60%) to third generation EGFR-TKI. For example, osimertinib, produced by AstraZeneca, can achieve an overall remission rate of 63% and a PFS of 9.7 months, which is considered effective treatment. Therefore, it is necessary to know the characteristics of NSCLC patients with T790M mutation after first generation EGFR-TKI treatment of acquired resistance. NCCN guidelines (13) suggest plasma detection to test the EGFR gene state after drug resistance, especially the T790M gene.

Tissue biopsies are invasive, and their possible association with complications and increased cost make them ill-suited for molecular testing. For patients with multiple metastases, different gene detection results may exist in different sampling sites (14). The above deficiencies can be well avoided by gene detection through plasma sampling. Genetic substances are released into circulation through several mechanisms, including apoptosis, necrosis, and exocytosis (15). Circulating tumor DNA (ctDNA) is part of cfDNA. Falling from tumor deposits into the vasculature, it is feasible to use peripheral blood for gene detection. Nakano et al. (16) found that the cfDNA in the plasma of lung cancer patients was higher than that of normal people. Meanwhile, Sundaresan et al. (17), when investigating the tumor tissue biopsy and non-invasive blood biopsy in patients, discovered that the genotyping result based on ctDNA was approximately equivalent to that based on tissue. Also, Douillard et al. (18) using synchronous detection of EGFR mutation by tumor tissue and plasma DNA, showed that the coincidence rate of plasma EGFR detection was 65.7%, and thus plasma testing can be used as a supplement to tissue specimens.

As it pertains to the detection method, Qin et al. (19) compared the methods of detecting EGFR mutations in plasma samples of patients with advanced NSCLC. In Scorpion Amplification Reference Mutation System (sARMS), denaturing high performance liquid chromatography (DHPLC), and direct sequencing method, the results showed that among 73 patients, the sARMS method detected 28 (38.4%) patients with EGFR mutations, direct DNA sequencing detected 5 of them (6.9%), and the DHPLC method detected 22 (30.1%). This shows that the sensitivity of sARMS is higher than DHPLC and direct sequencing method in detecting the EGFR gene mutation state of plasma DNA. Xu et al. (20) compared the methods of DHPLC, sARMS, and mutant-enriched PCR for testing EGFR mutations in peripheral plasma. The results showed that the mutation rates of EGFR in plasma were 15.7%, 29.4%, and 27.5%, respectively; thus, compared with the other two methods, sARM detection’s sensitivity was higher. The above data show that the sARMS method has a higher mutation sensitivity than DHPLC, the direct sequencing method, and the mutation enrichment PCR method.

In this study, the T790M mutation was detected by ARMS, and had a positive mutation rate of 36.51%, which is between the rate detected by ARMS as reported by Wei et al. (21) (30.6%) and that detected by ARMS as reported by Kuang et al. (22) (45.2%). The reason for this discrepancy may be due to different sensitivities of detection methods. Also, plasma DNA samples may contain mutations, wild-type ctDNA, and cfDNA of normal cell apoptosis. These factors will affect the detection positive rate of the plasma T790M mutation. The technology for how to acquire reliable DNA and continuously improve detection methods needs to be further explored in research.

The detection method of T790M mutation has continuously been updated and improved, both in terms of sensitivity and specificity. Next generation sequencing is currently the most advanced detection technology: not only is the sensitivity higher, but it can also provide more cancer gene information. However, it is both time-consuming and expensive, which limits its clinical application. In this study, we used ARMS to test for the T790M mutation, which had the advantages of simple and convenient operation, good repeatability, and widespread clinical use (23). Therefore, the ARMS method can be used to detect the T790M mutation state, and can partially replace the plasma detection of tissues.

Our study demonstrated that the frequency of T790M has no correlation with age, sex, and the type of first generation EGFR-TKI treatment. The EGFR 19del mutation at baseline and the mode of local progression after resistance to first generation EGFR-TKI were correlated with a higher frequency of the T790M mutation; thus, they can be a predictor of the T790M mutation.

Cells sensitive to EGFR-TKI due to 19del mutation and acquired resistance due to T790M mutation proliferate in vitro at a slower rate than parent cells (29). The growth speed of acquired drug-resistant tumor cells caused by T790M mutation in vivo is also significantly slower than that of their parent cells. This partly explains why the T790M mutation frequency of patients with local progression is higher than that of other progression modes. As our study did not carry out tissue biopsy for control study, false-negatives could not be avoided in the plasma detection of T790M mutation; at the same time, due to the limitation of sample size, it is difficult to clarify the exact mechanism whether the mutation frequency of T790M in patients with local progression was higher than that of other progression modes, and further research is needed.

Our study had some limitations. First, this is a single-center study, and there might have been selection bias; second, the sample size of this study was not large enough, and no control tissue biopsy was performed. This study found that patients with 19 del deletion and local progression after TKI treatment may be the predictive factors of T790M mutation, but the molecular mechanism behind this still needs further exploration and research.

Ethical Statement: The authors are accountable for all aspects of the work in ensuring that questions related to the accuracy or integrity of any part of the work are appropriately investigated and resolved. The study was approved by the Institutional Ethics Committee of Taizhou Hospital (ethical batch number: 201637).