Idiopathic pulmonary fibrosis (IPF) is a serious disease that causes respiratory failure by progressive lung fibrosis. Studies have reported an increase in the incidence of IPF and the resultant deaths (1,2). In recent years, although nintedanib and pirfenidone have been shown to be effective disease-modifying agents, their beneficial effect on the prognosis of patients with IPF has been limited. Lung transplantation is the only definitive therapy in pharmacologically refractory IPF; however, only a small proportion of patients undergo the procedure due to insufficient supply of donor organs, technical challenges associated with the transplantation, or peri-operative conditioning (3). In the United States, the median period of survival of patients with IPF aged 65 years and older is only 3.8 years (4). In particular, the prognosis is extremely poor in IPF patients experiencing acute respiratory failure (ARF), the in-hospital mortality reaching almost 85%. Moreover, mechanical ventilation (MV) does not have a significant therapeutic effect on the survival, unlike in ARF caused by other etiologies (5). Impaired gas exchange and reduced pulmonary compliance lead to high peak airway pressure, tidal volume, and fraction of inspired oxygen (FiO2). These traumatic components could accelerate progression of the disease (6).

The institutional review board of Asan Medical Center (IRB No. 2019-0222) approved the current study. Informed consent was waived owing to the retrospective design of the study based on medical records.

This retrospective descriptive study was conducted on patients with IPF who were admitted to the Asan Medical Center, Seoul, Korea, from January 2015 to December 2017 and underwent HFNC oxygen therapy or MV during hospitalization (Figure 1). Patients were divided into three groups (HFNC only group, MV with prior HFNC group and MV only group). The study subjects were limited to those who had an established diagnosis of IPF according to the statement of the American Thoracic Society (ATS)/European Respiratory Society (ERS)/Japanese Respiratory Society (JRS)/Latin American Thoracic Association (ALAT) (10), and who were followed up at this hospital. 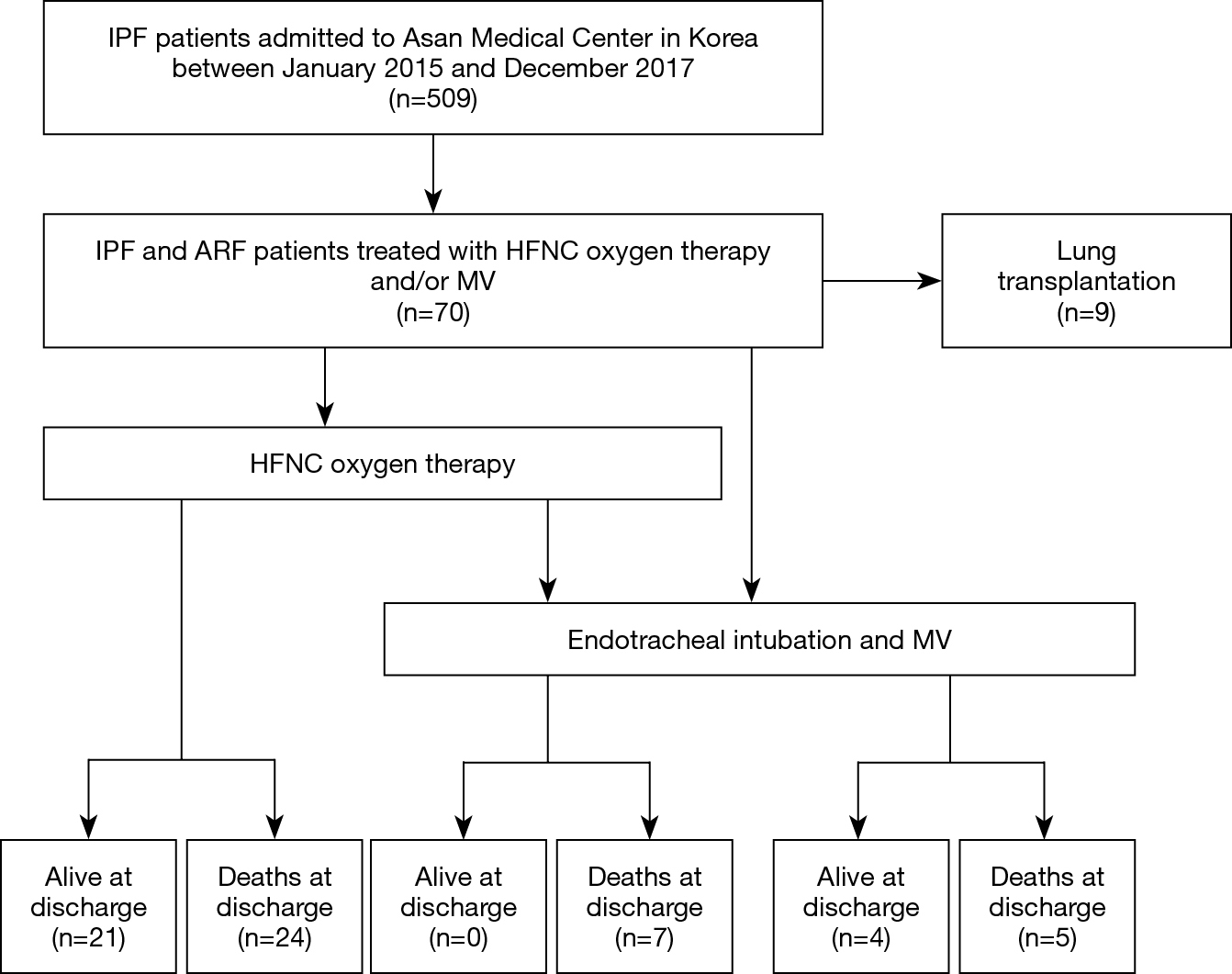 The demographic factors and clinical parameters of the patients were reviewed from the electronic medical records. The results of the most recent (within six months) spirometry and diffusing capacity of the lung for carbon monoxide (DLCO) were retrieved to assess the severity of IPF before admission and the GAP index (11) and du Bois score (12) were calculated based on this information. Status of the patients at the time of admission was confirmed by vital signs and arterial blood gas analysis (ABGA).

The primary outcome measure was in-hospital mortality, which was compared among HFNC only group, MV with prior HFNC group, and MV only group. Other pre-specified outcome measures were length of hospital stay, length of intensive care unit (ICU) stay, and the proportion of do-not-resuscitate (DNR) consent status. The vital signs were evaluated in patients who underwent HFNC oxygen therapy before the initiation of treatment and after 8 hours of treatment to indirectly assess respiratory distress. Ventilator-associated complications were reviewed in patients who underwent MV. Possible ventilator-associated pneumonia (PVAP) was defined based on the ventilator-associated event (VAE) surveillance algorithm definition by the Centers for Disease Control and Prevention (CDC) National Health Safety Network (13).

The results are represented as mean values and standard deviations (SD) or median and interquartile range (IQR) for continuous variables and numbers and percentages for categorical data. Group comparisons were based on the Fisher’s exact test or χ2 test for categorical data, and Kruskal-Wallis test for continuous data. All statistical results were evaluated using SPSS for Windows (Version 21.0, IBM Corporation, Chicago, IL, USA).

A total of 61 patients with IPF and ARF were included in the current study. There were a higher number of male patients (n=48, 78.7%), and the mean age was 70.8 years. No significant difference was observed among three groups, except the baseline history of coronary artery disease. Most patients had advanced IPF (Table 1). GAP index stage III was the most common and the mean du Bois score was 42.8. The vital signs and ABGA results of the patients were not significantly different between the groups at the time of admission (Table 2). 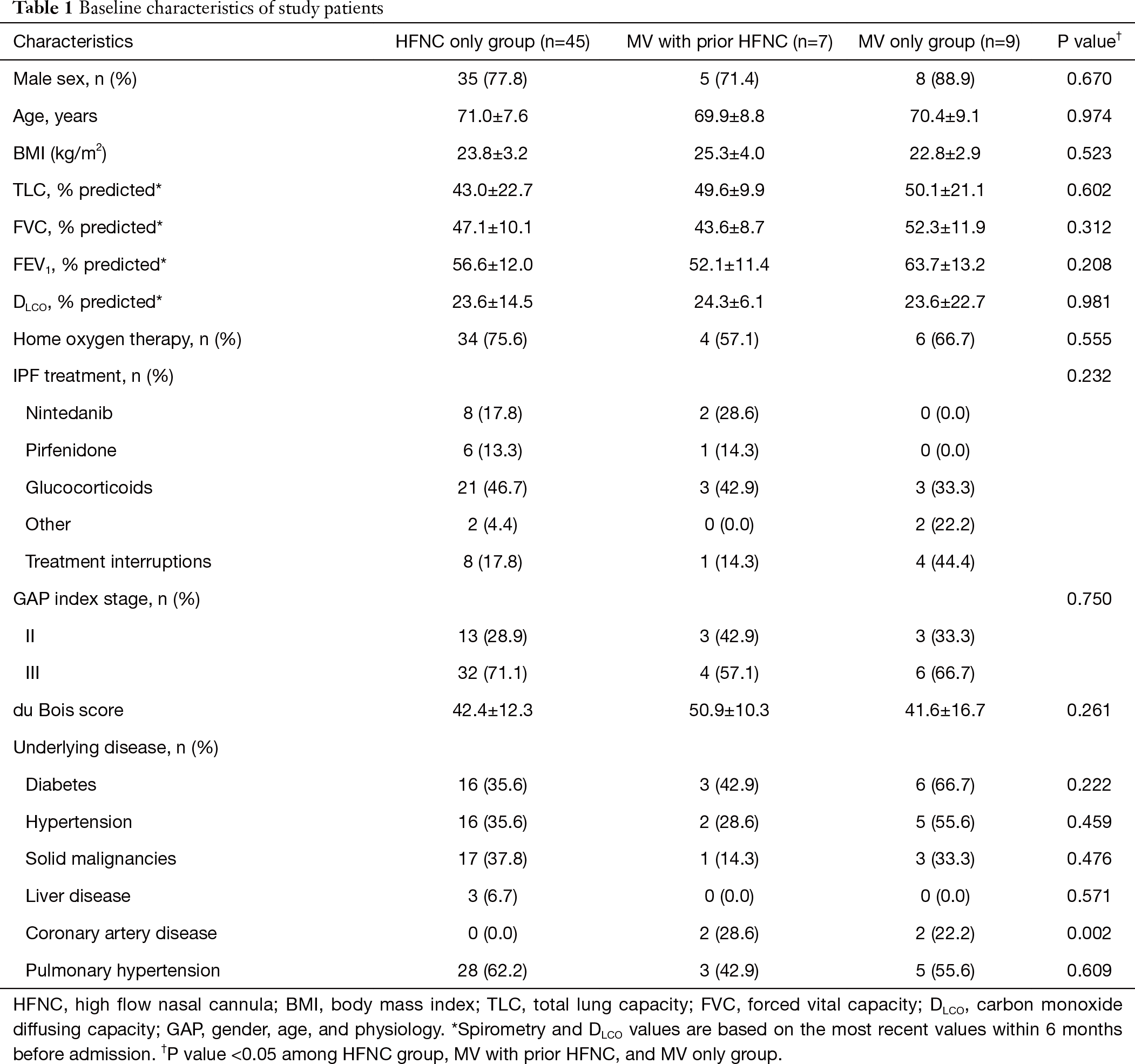 The PF ratio before intubation in the MV only group was 143.4±75.5 mmHg. In the MV with prior HFNC oxygen therapy group, the average time from application of HFNC oxygen therapy to MV was 5 (3–5.5) days and the PF ratio was 120.4±55.9 mmHg at intubation. In patients who underwent MV, PVAP occurred in five of 16 patients (31.2%), and barotrauma (e.g., pneumomediastinum or pneumothorax) occurred in two patients (12.5%) during the procedure.

Respiratory failure in patients with IPF patients carries a miserable outcome, and no effective treatment is present to reverse progression of the condition (14). More than half of the patients in the current study died in the hospital, regardless of application of HFNC oxygen therapy or MV. In addition to not being able to reverse the course of the disease, the choice of MV could cause patient discomfort, increased requirement for sedation and ventilator-associated pneumonia. Particularly, the lung is vulnerable to the stress of MV due to progression of fibrosis. In the current study, complications related to MV occurred in many patients in the MV group. When considering the distinct characteristics of the disease, endotracheal intubation in acute respiratory failure in patients with advanced IPF is controversial. Nevertheless, according to a recent report, approximately 10% of IPF patients continue to receive MV, and is associated with increased admission cost and mortality (9).

Early integrated palliative care is essential for patients with advanced IPF due to limited life expectancy and the heavy burden of symptoms. Despite recommendations for palliative care, the majority of IPF patients continue to receive life-prolonging procedures such as non-invasive ventilation, and end-of-life decisions are often delayed (18). Decision to refrain from intubation usually depends on the assessment of futility of care, wishes of the patient, and high probability of poor quality of life in the future (19). In the current study, non-survivors in the MV group showed lower agreement on the DNR order, which was very late, i.e., average 2 days prior to death. This may be associated with the low awareness of end-of-life care in patients with advanced IPF. In addition, patients with IPF receiving MV are referred to palliative care in a minority of cases (20). Therefore, in instances of no further treatment plan such as lung transplantation, the decision to perform invasive ventilation should be made in a discrete manner. HFNC oxygen therapy is advantageous in patients with advanced IPF in that they can make end-of-life decisions on their own until the last minute of consciousness, as patients are able to communicate unlike endotracheal intubation. HFNC oxygen therapy also plays a role in palliative care because symptoms such as shortness of breath can be relieved, and consumption of food and drink is facilitated. Therefore, in cases of patients with advanced IPF who are hospitalized with acute respiratory failure, wherein active integrated palliative care and end-of-life decisions are required, HFNC oxygen therapy may be the most appropriate modality for respiratory support.

The current study has several limitations. First, a single center, retrospective study might be associated with selection bias of patients. The application of the HFNC oxygen therapy or MV was based on the clinical decision of the physician. Although the baseline characteristics such age, pulmonary functions, and severity were compared, the sicker patient might have included in the MV group. However, a randomized trial is difficult due to the poor outcome of MV and routine application of HFNC oxygen therapy. Second, too few patients were included to analyze the statistical meaningful difference. Third, intubation was an inevitable step when patients and families disagreed for DNR despite the clinician recognizing the poor prognosis of the disease.

In the current retrospective study, the HFNC group showed shorter duration of stay in the hospital and ICU without difference in mortality. However, the application of MV in the HFNC oxygen therapy failure group showed extremely higher mortality. Considering the complications of MV and the end-of-life care, the further study for the guideline of the transition to MV are needed.

Ethical Statement: The authors are accountable for all aspects of the work in ensuring that questions related to the accuracy or integrity of any part of the work are appropriately investigated and resolved. The institutional review board of Asan Medical Center (IRB No. 2019-0222) approved the current study. Informed consent was waived owing to the retrospective design of the study based on medical records.