Data from patients who underwent anterior mediastinal lesion and LIV resection in the Department of Thoracic Surgery of Tangdu Hospital, Air Force Medical University, from January 2010 to December 2018 were retrospectively analyzed. Preoperatively, all patients underwent enhanced chest computed tomography (CT) to determine LIV involvement and stenosis severity. They also underwent complete blood count analysis, blood gas analysis, cardiac ultrasonography, electrocardiography (ECG), and analysis of liver and kidney function, electrolytes, coagulation series, and pulmonary function to exclude surgical contraindications. Our Ethical Committee was informed of the study and did not require approval. All patients gave their informed consent for the study.

LIV resection may lead to venous return blockage and blood stasis in the drainage area, causing swelling of the left upper limb and face, engorgement of the left jugular vein, varicosity in the left anterior chest wall and upper abdomen, left periorbital edema, conjunctival hyperemia, blurred vision of the left eye, and cerebral edema-derived dizziness, headache, convulsions, and disturbance of consciousness (15,16). “Safety” is defined as no LIV resection-associated complications and no manifestation of the above-described symptoms; “Danger” is defined as the manifestation of severe LIV resection-associated complications (tissue necrosis in the left upper limb, sensory and motor dysfunction, convulsions, impaired vision, and disturbance of consciousness); and “Relative safety” is defined as the manifestation of mild LIV resection-associated complications (the above-described symptoms but no serious complications).

Anterior mediastinal lesions were resected laparoscopically using the “three-hole” operation via the subxiphoid and subcostal arch approach, and the invaded LIV was removed intraoperatively through the proximal and distal end by closure resections with a vascular closure device (Figures 1,2). Thoracotomy (including conversion of laparoscopic surgery to open surgery) was used to remove the invaded anterior mediastinal lesion via a vertical incision in the sternum, and the invaded LIV was closed or incised via ligation intraoperatively using a vascular closure device and a suture, respectively, at the proximal and distal ends. All patients were returned to the intensive care unit (ICU) with tracheal intubation and ventilator assistance and injected subcutaneously with low-molecular-weight heparin sodium (0.4 mL/day) within 24 hours after surgery. 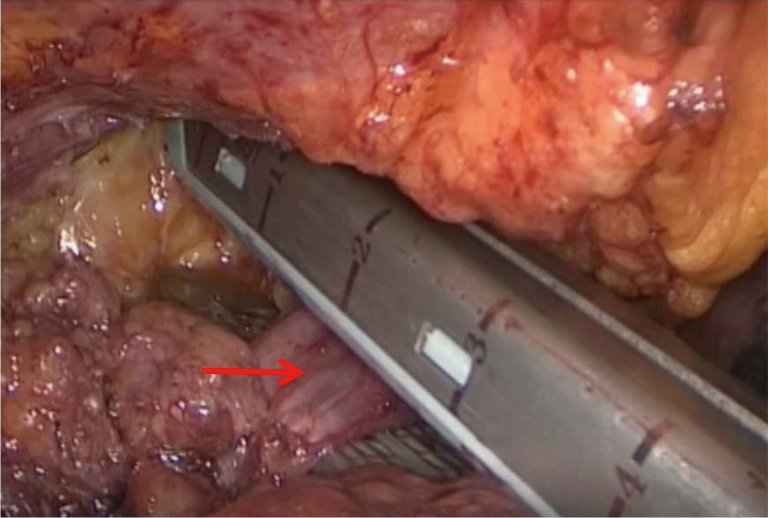 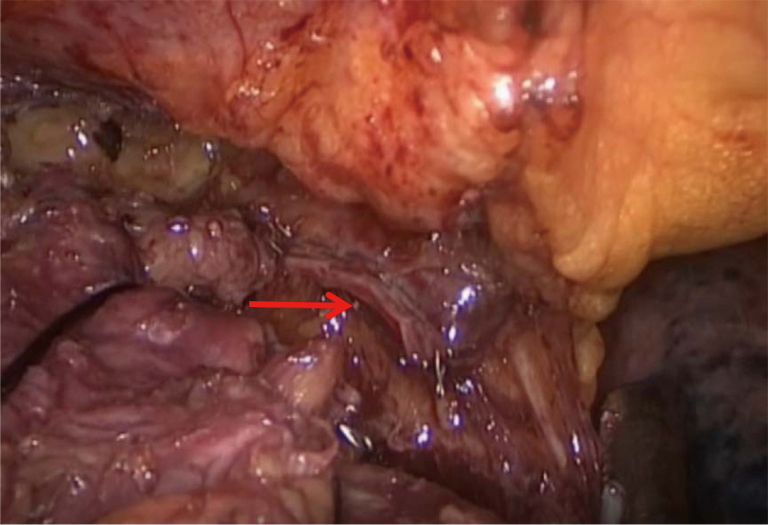 Patients were followed up regularly after surgery and subjected to various comprehensive treatments (e.g., radiotherapy and chemotherapy) according to their respective pathological types. 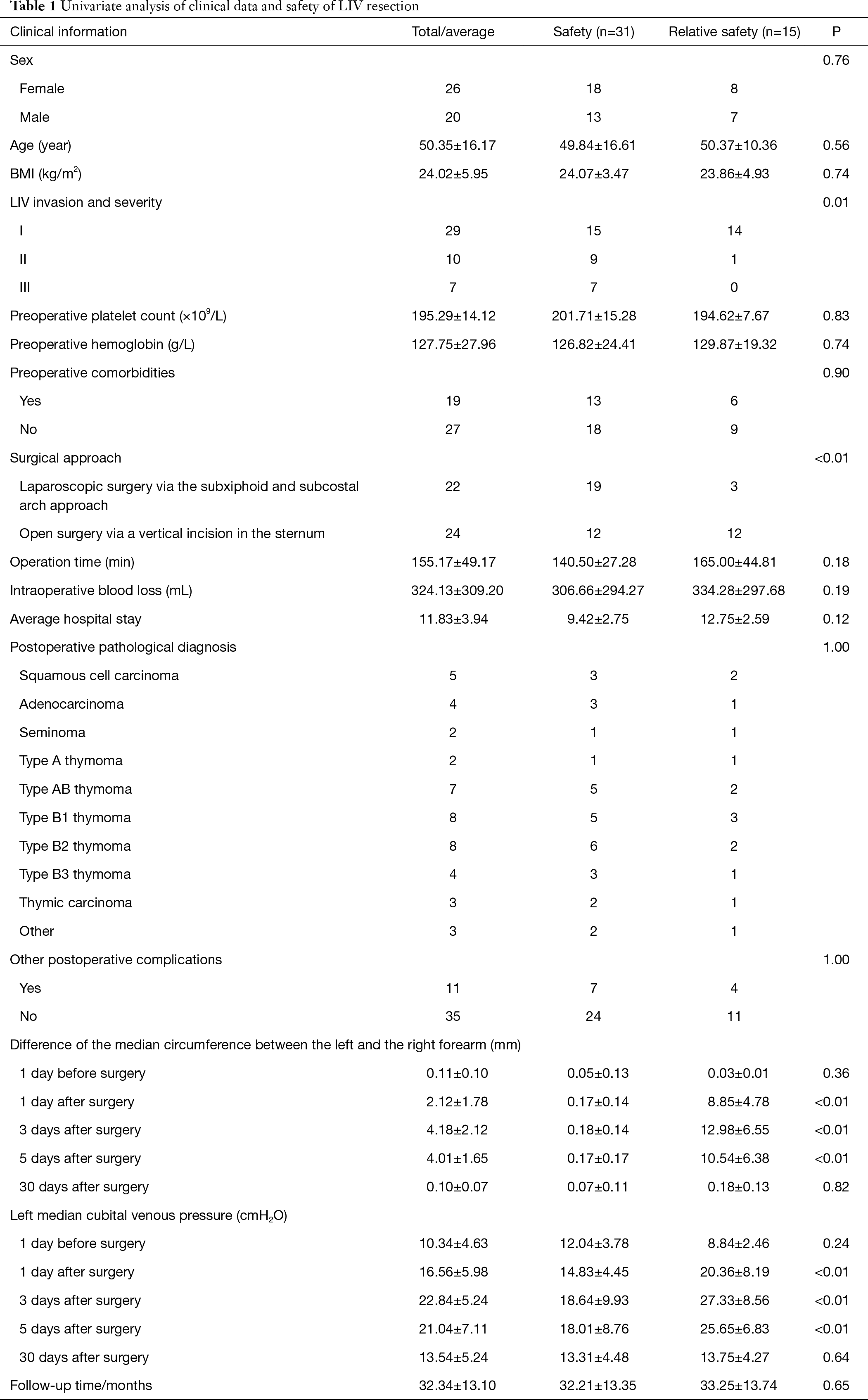 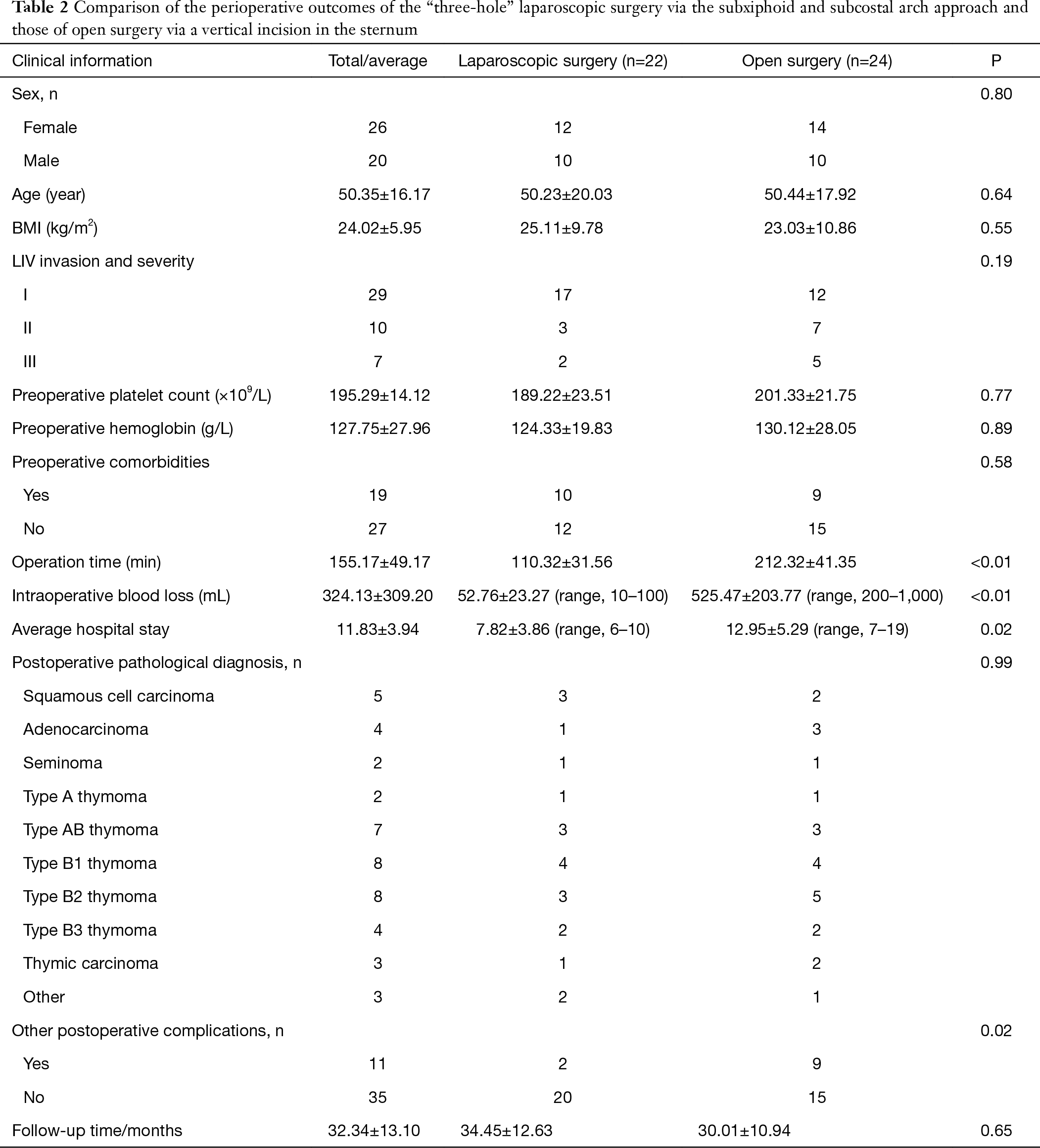 Among the 48 patients, 2 died perioperatively of septic shock derived from pulmonary infection and thus were excluded from the follow-up. The remaining 46 patients were followed up for an average of 32 months (range, 6–72 months); 20 were male, and 26 were female, with an average age of 50.35 years (range, 27–72 years), a preoperative mean body mass index (BMI) of 24.02 kg/m2 (range, 17–35 kg/m2), a preoperative mean platelet count of 195.29×109/L [range, (101–412)×109/L)], and a preoperative mean hemoglobin level of 127.75 g/L (range, 109–156 g/L). Nineteen patients manifested hypertension, diabetes, myasthenia gravis, and anemia. Twenty-two patients underwent “three-hole” laparoscopic surgery via the subxiphoid and subcostal arch approach, and 24 patients underwent open surgery via a vertical incision in the sternum, with an average operation time of 155.17 min (range, 90–260 min), an average blood loss of 324.13 mL (range, 10–1,000 mL) and an average length of hospital stay of 11.83 days (range, 6–19 days). Postoperative pathological examination indicated the following diagnoses: 5 cases of squamous mediastinum, 4 cases of adenocarcinomas mediastinum, 2 cases of seminoma, 2 cases of type A thymoma, 7 cases of type AB thymoma, 8 cases of type Bl thymoma, 8 cases of type B2 thymoma, 4 cases of type B3 thymoma, 3 cases of breast cancer, and 3 cases of other diseases. Eleven patients manifested various postoperative complications such as pulmonary infection, pleural effusion, atelectasis, and myasthenic crisis and were all discharged after the complications were treated.

Anterior mediastinal tumors often involve the superior vena cava and the left and right innominate veins and cause superior vena cava syndrome in severe cases (3-5,17). Artificial vascular replacement or pericardial patch repair are difficult and risky, and in the 1970s, superior vena cava syndrome was often listed as a surgical contraindication, for which conservative treatment was recommended (18). After nearly 4 decades, with the improvement in diagnostic and surgical techniques and the extensive application of vascular substitutes, breakthroughs have been made regarding operations on patients with superior vena cava syndrome, and the removal of the superior vena cava and (or) the left and right innominate veins and vessel replacement or bypass through artificial blood vessels have made it possible for radical resection of tumors or have relieved superior vena cava obstruction (11,12,17,19-23). For cases in which the anterior mediastinal lesion simply invades the LIV and phleboplasty cannot be performed, what are the options? Artificial vascular replacement or LIV resection? The former conforms to the physiology and is conducive to blood return but is associated with unfavorable factors such as surgical trauma, long operation time, high surgical difficulty, and the need for long-term anticoagulation; the latter is simple, fast, and minimally invasive, but its safety and postoperative blood return pathway have not been thoroughly investigated (6,15,16) but were explored in this study.

The LIV is formed by the confluence of the left internal jugular vein and left subclavian vein posterior of the left sternoclavicular joint, accommodating venous blood flow in the left internal jugular vein, left subclavian vein, left vertebral vein, left internal thoracic vein, and inferior thyroid vein and collecting venous blood flow from the left head and neck, left upper limb and left chest (except the heart) and part of the left upper abdominal wall (15). After LIV resection, the related blood return pathways may be as follows: (I) communicating branches of the left and right innominate vein: the left and right innominate veins have extensive communicating branches in the cranium, the face, the neck, and between the deep and superficial veins of the upper chest wall, and when the LIV is chronically obstructed, the venous blood collected by the LIV from the left head and neck, the left chest, and part of the left upper abdominal wall can be returned to the right innominate vein (24); (II) communicating branches of the superior and inferior vena cava (Figure 3): there are several important communicating branches between the superior and inferior vena cava (16,25-27), including the azygos venous system, the internal thoracic and pericardiacophrenic veins, and the lateral thoracic and thoracic wall and abdominal wall veins (28,29), of which the azygos venous system consists of the azygos vein, accessory azygos vein, and accessory hemiazygos vein and mainly collects blood flow from the shoulder and back veins, the vertebral venous plexus and the posterior intercostal veins and connects the LIV and the superior and inferior vena cava. The communicating branches of the superior vena cava and the azygous venous system are important pathways for acute LIV obstruction and venous return in the left upper limb (Figures 3-5). 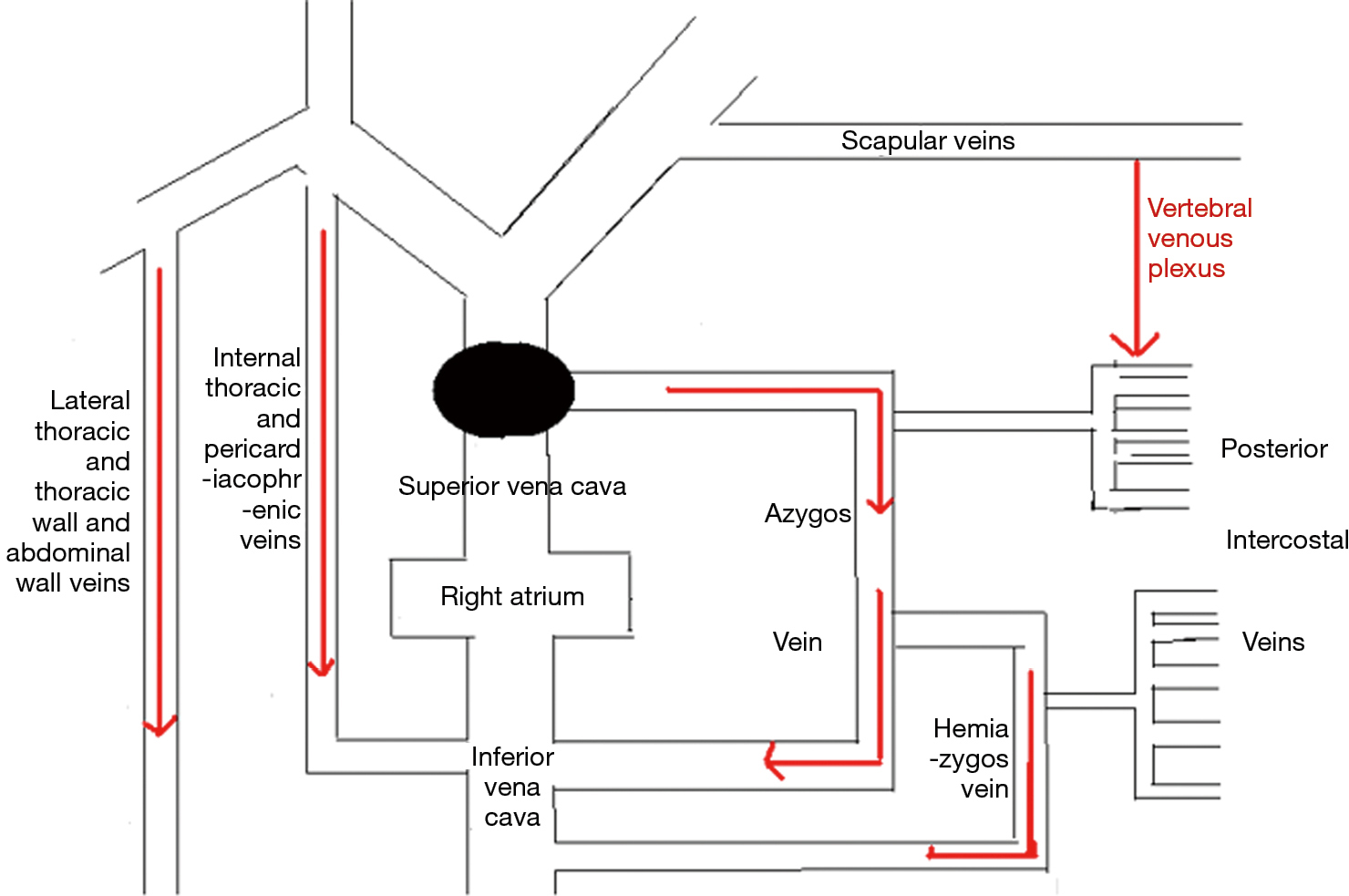 Figure 3 Communicating branches of the superior and inferior vena cava. 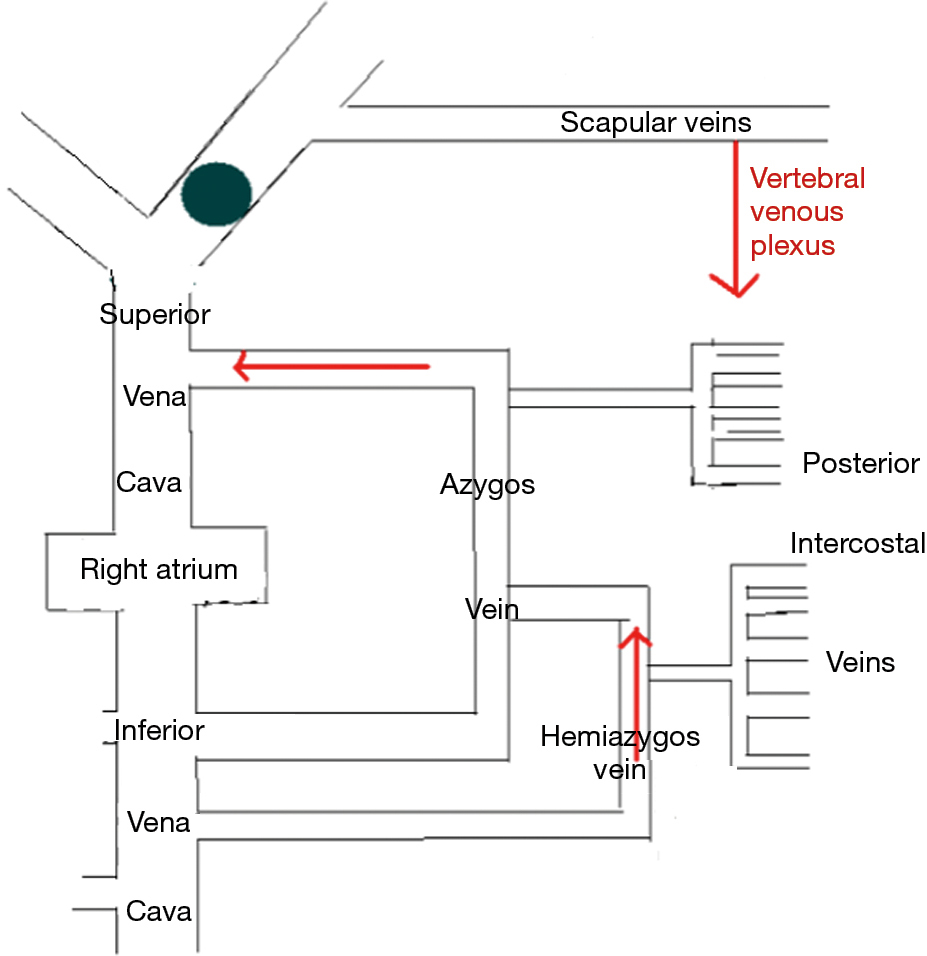 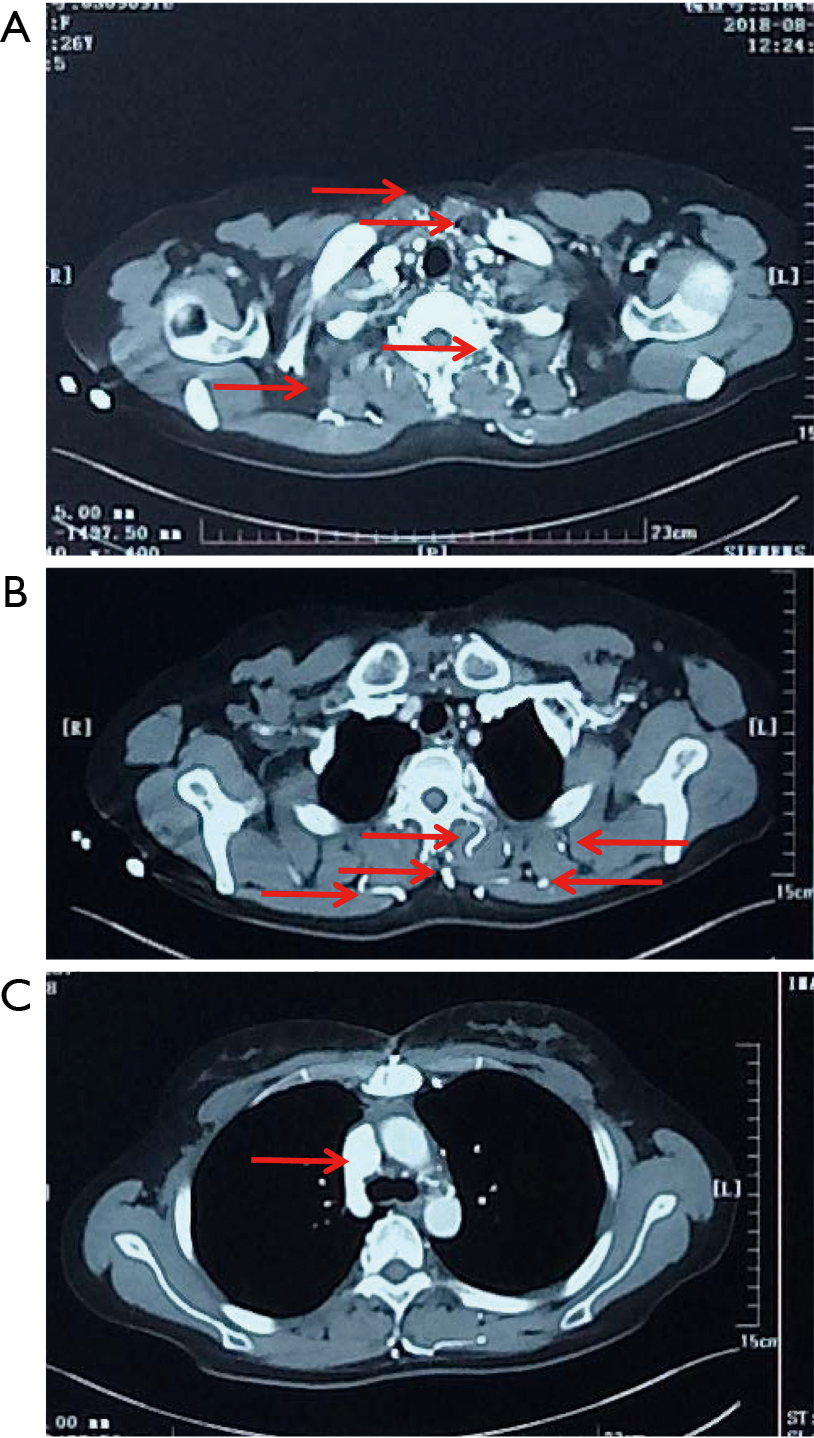 With the rapid development of thoracoscopic techniques, video-assisted thoracoscopic surgery (VATS) has been widely used in the resection of anterior mediastinal lesions. Compared with traditional open surgery, thoracoscopic surgery has the advantages of less trauma, less bleeding, quicker recovery, fewer complications, etc. and is thus a safer and more effective procedure. In this study, we also found that compared with open surgery via a vertical incision in the sternum, laparoscopic surgery had a shorter operation time, less intraoperative blood loss, and shorter average hospital stay, with fewer LIV resection-associated complications (Table 2). In particular, “three-hole” laparoscopic surgery via the subxiphoid and subcostal arch approach (30-34) can reduce damage to the communicating branches of the chest wall and is conducive to the protection of the left internal thoracic vein and the pericardiacophrenic vein under direct vision during surgery, which reduces the incidence of postoperative blockage of blood return. Certainly, the choice of surgical approach is more dependent on the location and size of lesions in the anterior mediastinum, and under the premise of full assessment of the preoperative conditions and when conditions permit, laparoscopic surgery via the subxiphoid and subcostal arch approach should be clinically promoted.

Our extensive literature survey indicated that for superior vena cava obstruction, artificial vascular replacement has been mostly adopted while simple LIV resection has been mentioned rarely, without examination of its safety (6,15,16). In this study, we retrospectively analyzed the clinical cases of anterior mediastinal lesion and LIV resection in our hospital and concluded that LIV resection is a relatively simple, safe and effective surgical procedure. Although some patients may develop mild complications such as left upper limb swelling and dizziness, the complications can be effectively treated with diuretics, reduction in intracranial pressure and anticoagulation therapy. The degree of LIV invasion and laparoscopic surgery are safe factors for LIV resection-associated complications. Because this study is a retrospective analysis, there are limitations such as bias, and the findings should be verified through multicenter, large-scale prospective randomized controlled trials.

Funding: This study was partially supported by Key Research and Development Plan of Shaanxi Province (No. 2017ZDXM-SF-052).

Ethical Statement: The authors are accountable for all aspects of the work in ensuring that questions related to the accuracy or integrity of any part of the work are appropriately investigated and resolved. Our Ethical Committee was informed of the study and did not require approval. All patients gave their informed consent for the study.