The prevalence of severe end-stage heart failure (HF) is increasing worldwide. Despite progress in medical therapy, some patients with end-stage HF will need left ventricular assist device (LVAD) implantation as a bridge to transplant (BTT) or destination therapy (DT) to improve survival and quality of life (1).

Right ventricular failure (RVF) after LVAD implantation remains a major complication with a prevalence ranging between 9–51% and is significantly associated mortality and morbidity (2,3). For that reason, clinicians evaluating patients for LVAD implantation must be aware of the risk factors for RVF after LVAD implantation (2,3). Several preoperative clinical, biological, hemodynamic or echocardiographic variables have been assessed as risk factors for post-LVAD RVF, but none of these risk factors allow optimal patient selection (2,3). This situation supports a multidisciplinary approach for patient selection and the development of perioperative strategies to prevent RVF. Furthermore, several changes have occurred in the last decade with the switch from an axial pump to a smaller centrifugal pump and the development of a less invasive approach for LVAD implantation through a thoracotomy (4,5). These changes may have an impact on RVF prevalence.

The aim of this study was to determine the risk factors for RVF after LVAD implantation and to evaluate the impact of RVF on mortality and morbidity.

A retrospective review of all consecutive patients undergoing LVAD implantation in our institution between January 1, 2010, and May 1, 2018, was performed. Sixty-eight patients were enrolled in this single-center, observational study. For all consecutive patients operated in our department, preoperative, intraoperative and postoperative data were systematically and prospectively collected in a database (ASTR, Access, Microsoft®). Because, the study is a retrospective analysis of institutional data, and in compliance with the French law on clinical research, we only had to obtain French personal data protection authorization. We submitted our study to the national commission for data protection (CNIL) and obtained authorization. The study was approved by institutional ethic committee of the University Hospitals of Strasbourg.

For the mini-sternotomy plus left anterolateral thoracotomy approach, we followed the surgical technique described elsewhere (6). In our practice, an upper hemi-sternotomy with a “T inverted” incision was performed. The left ventricular apex was systematically located with a transthoracic echography, and the left thoracotomy incision was performed facing the apex. When cardiopulmonary bypass was utilized, central cannulation was favored. The sewing ring was attached, and after initiating the cardiopulmonary bypass, the left ventricle was cored, and the inflow cannula was introduced and fixed to the ring. The outflow graft was placed based on the lateral wall of the left ventricle in front of the pulmonary artery, and an end-to-side anastomosis was performed on the ascending aorta.

For the left posterolateral approach, the left ventricular apex was located with the transthoracic echocardiography, and the thoracotomy was performed facing the apex. The sewing ring was placed first and after heparinization, and the outflow graft was anastomosed end-to-side on the descending aorta using a partial cross-clamp. The femoral vessels were used, and cardiopulmonary bypass was started. The left ventricle was cored, and the inflow cannula was introduced after retrograde de-airing and fixed to the ring.

Since 2017, an epicardial echocardiography was systematically used to determine the best inflow cannula placement of the LVAD to ensure the absence of conflict with the left ventricular wall; that the inflow cannula will be parallel the interventricular septum and coaxial with the mitral orifice and to eliminate any trabeculation or thrombus.

Right ventricular (RV) dysfunction after LVAD implantation was stratified by the Mechanically Assisted Circulatory Support (INTERMACS) classification. Three levels of RV dysfunction were defined by the duration of inotrope support [mild (≤7 days), moderate (8–14 days) and severe (>14 days)] or the implantation of a mechanical RV assist device (3).

The secondary endpoints were hospital mortality and morbidity and long-term survival.

Two groups were defined: an RVF group and a control group. The data are presented as the mean ± standard deviation (SD). Differences between the categorical variables were tested using chi-square or Fisher’ exact tests depending on the expected values. Differences between continuous variables were tested using Student’s t-tests or the Mann-Whitney U-tests depending on whether there was a Gaussian distribution.

Potential risk factors for RVF (RVF group) were first tested using a univariate analysis. After performing the univariate analysis, only the variables with a P value less than 0.05, which were determined using a two-tailed t-test, were used in the multivariate logistic regression analysis (with a backward, stepwise method based on the likelihood ratio test). The odds ratios and their corresponding 95% confidence intervals are reported in addition to their associated P values.

The cumulative probability of survival was estimated with the Kaplan-Meier method and was compared between groups using a log-rank test.

The preoperative variables sorted by occurrence of RVF are reported in Tables 1,2. 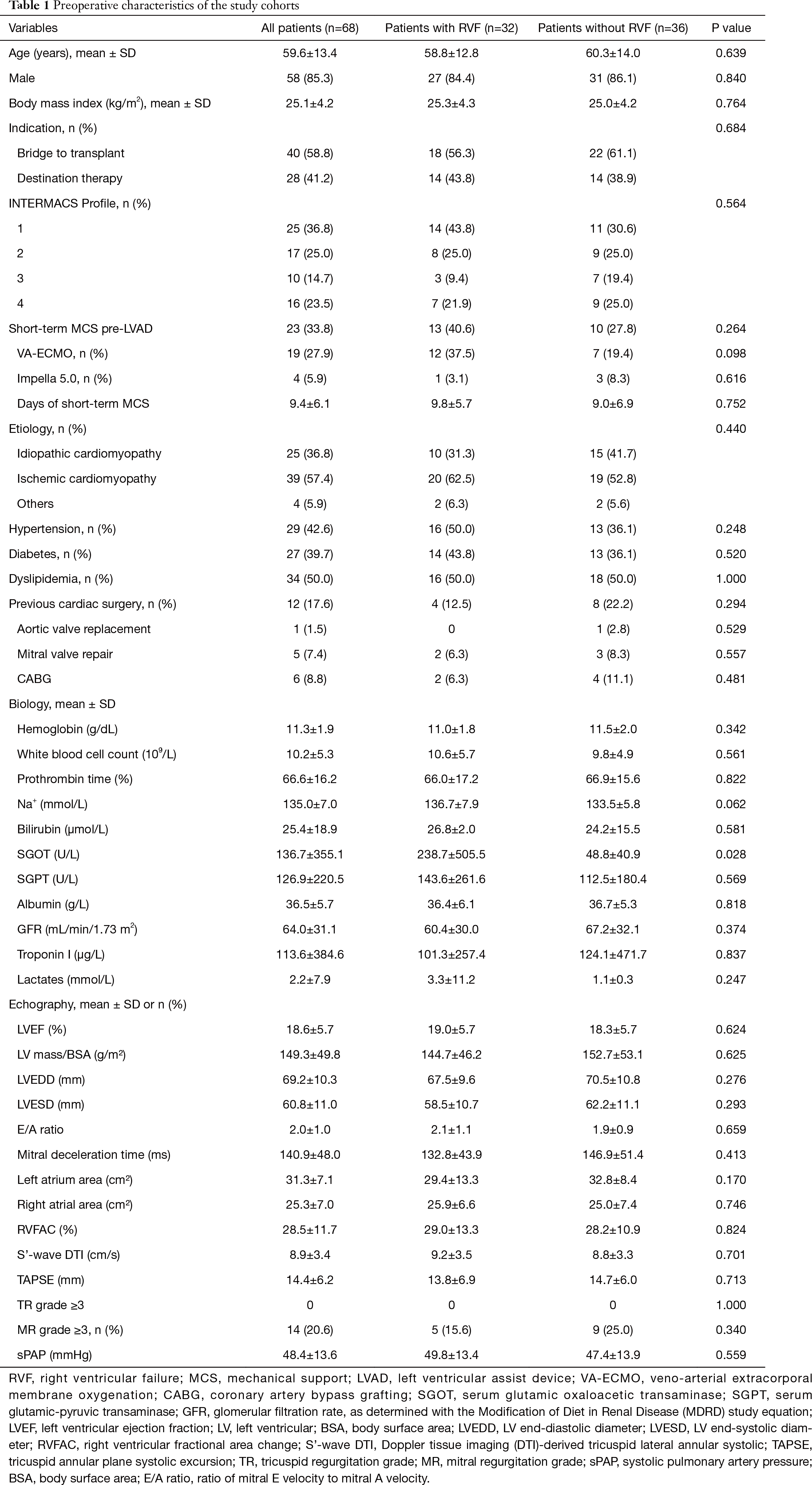 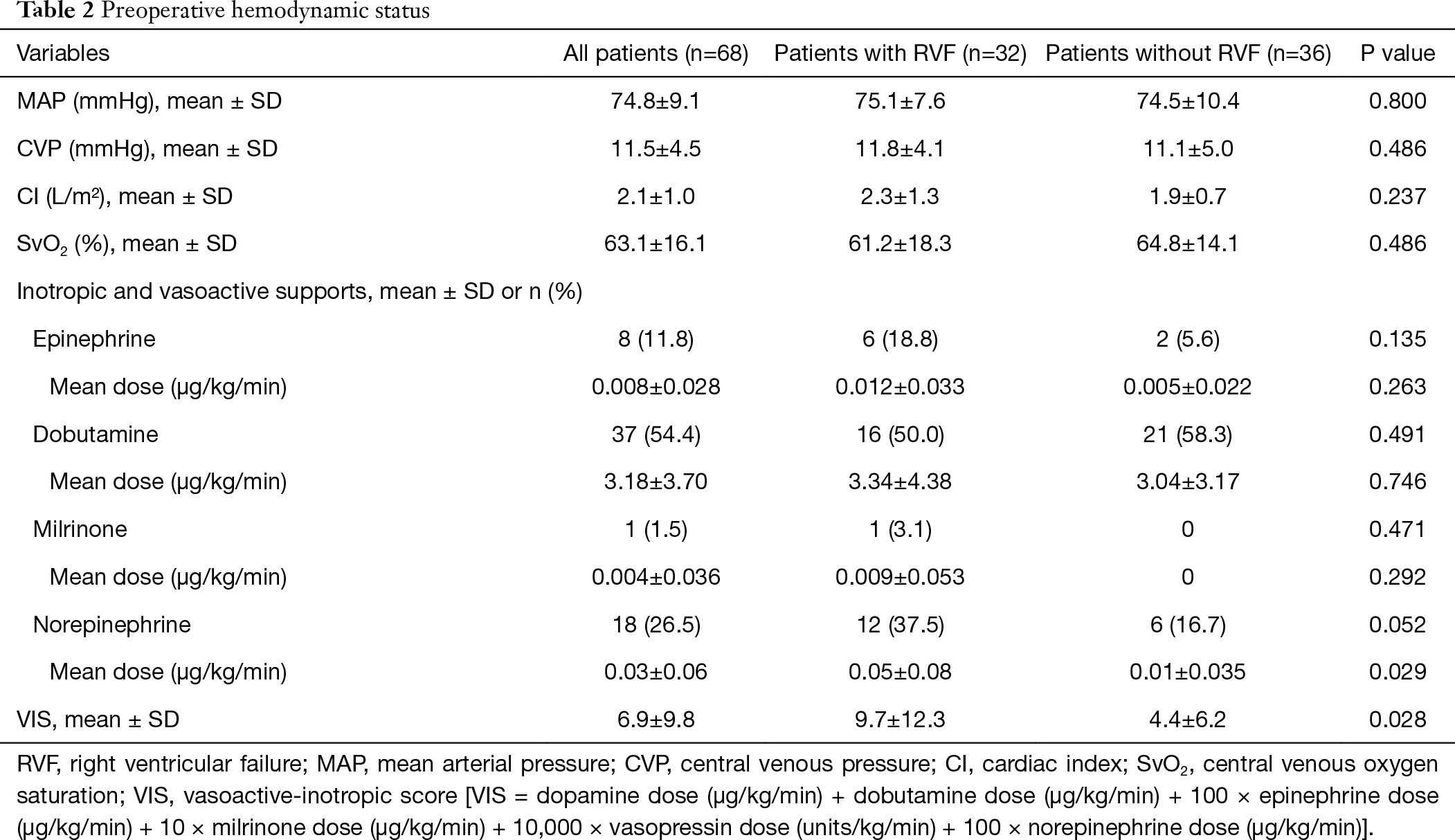 The patient demographics and echography parameters were similar in the two groups (Table 1). Only serum glutamic oxaloacetic transaminase (SGOT) was significantly higher in the RVF group compared to the control group (P=0.028).

The operative data are reported in the Table 3.

The LVAD implantation was performed through a median sternotomy in 37 patients (54.4%) and through a thoracotomy approach in 31 patients (45.6%). The median sternotomy approach was used significantly more often in the RVF group (71.9%) than in the control group (38.9%; P=0.006; Table 3). Four patients in the control group with preoperative extracorporeal membrane oxygenation (ECMO) underwent LVAD implantation under only ECMO support, and 1 patient was off the pump.

The preoperative and operative patient characteristics (with a P value less than 0.05 in the univariate analysis) of the control and RVF groups are reported in Tables 1-3. 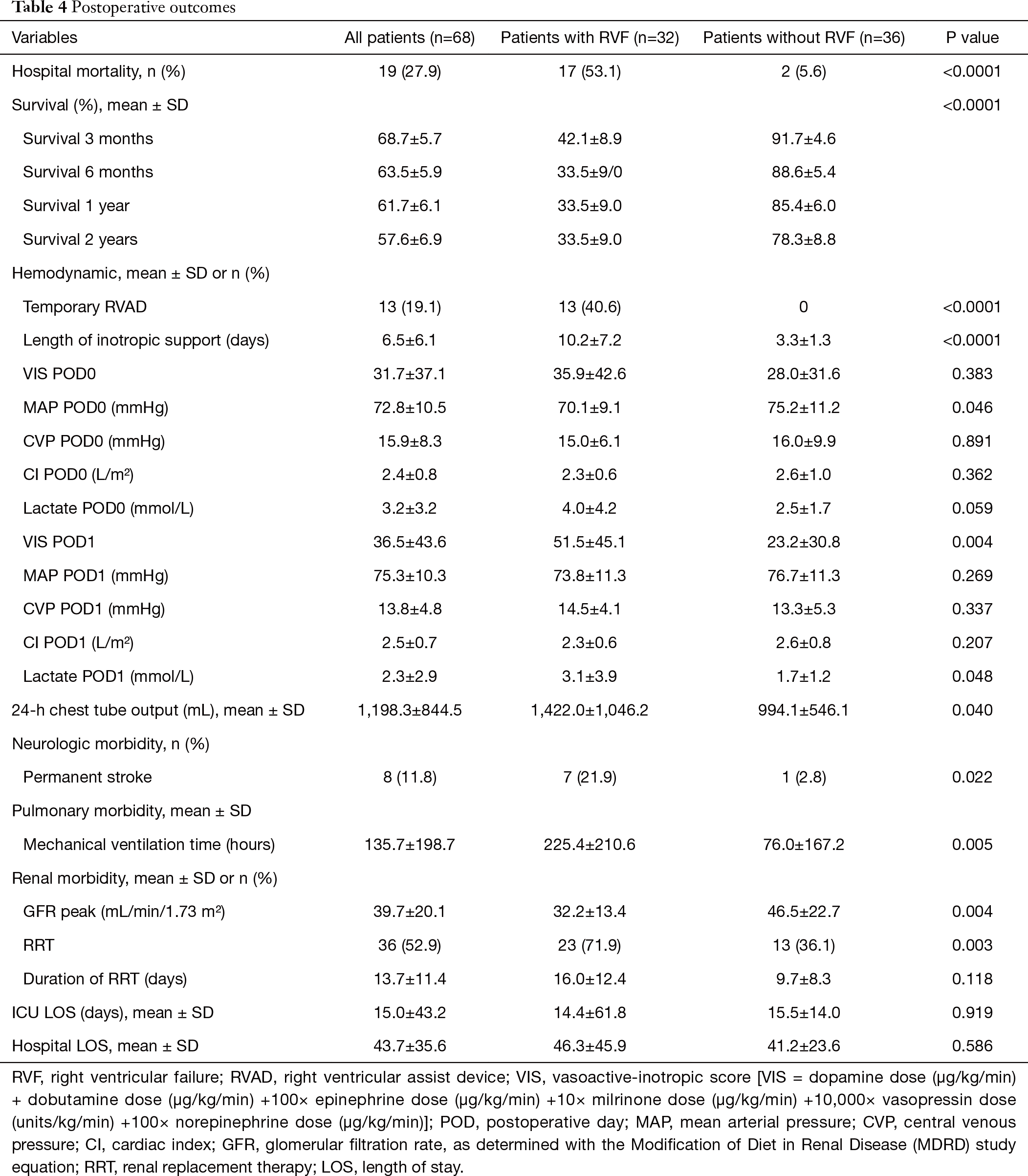 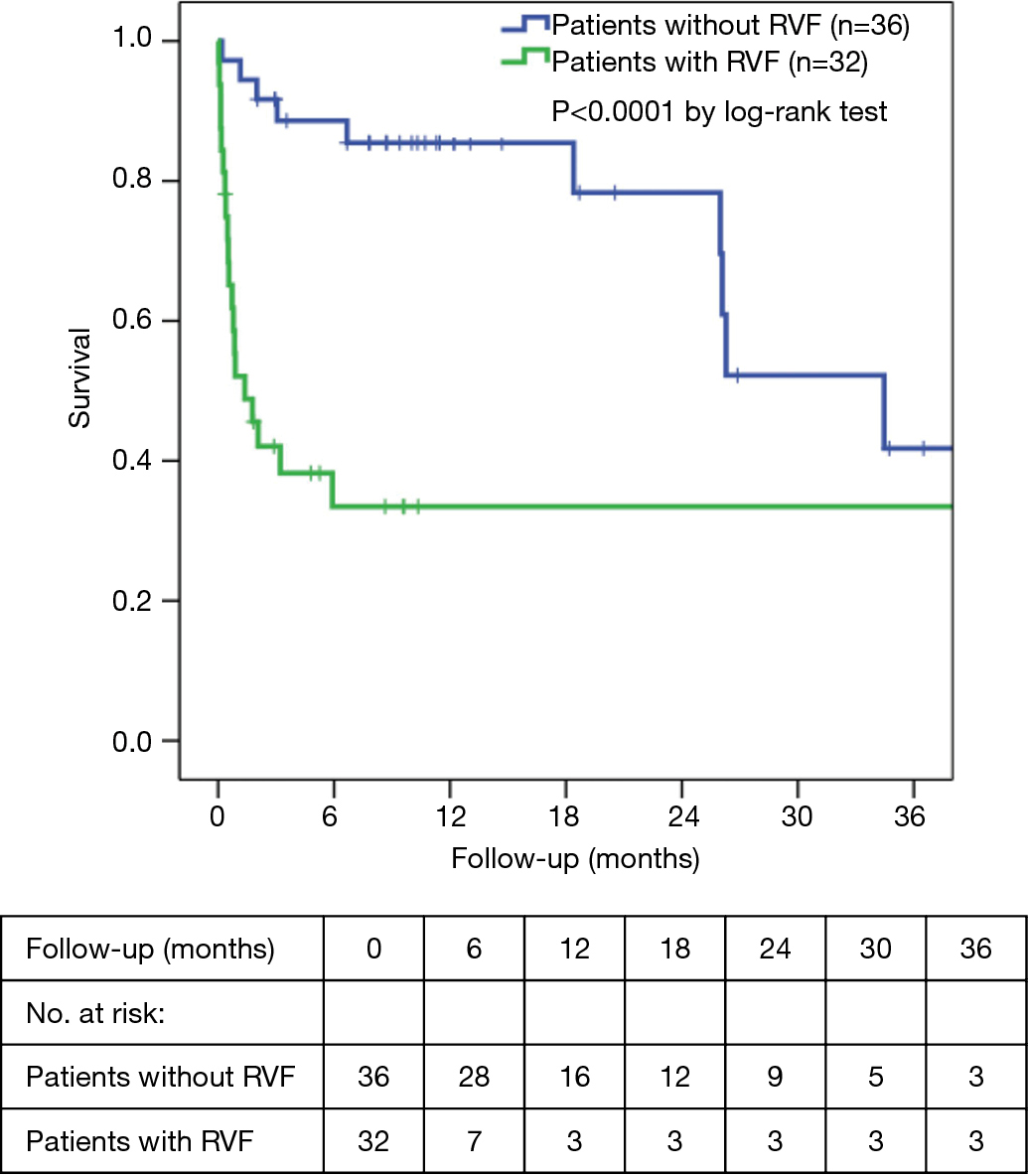 There were 13 (19.1%) patients who required RV assist device implantation. Among these patients, six patients died, and seven patients were successfully weaned from their temporary mechanical support after a mean support time of 10.5±5.6 days.

The aim of this study was to determine the risk factors for RVF after LVAD implantation. The main results of the study are as follow: (I) the thoracotomy approach for LVAD implantation significantly reduces the risk of postoperative RVF in our population with a high preoperative risk profile; (II) RVF significantly impacts hospital mortality, long-term survival and hospital morbidity.

We found that the thoracotomy approach was associated with a significant decrease in RVF risk after LVAD implantation. Other studies reported that less invasive approaches were associated with a significant reduction in RVF incidence (13-15). Our study is the first to demonstrate the strong positive impact of the thoracotomy approach to prevent RVF with a multivariate risk model analysis. We started this strategy in 2016, and it is now the reference technique for LVAD implantation. Even in the most severe profiles, this technique may be used with a significant benefit in the risk of RVF, as others have also demonstrated (13).

The protective effect of the thoracotomy approach on the risk of RVF may be explained by three mechanisms: the preservation of pericardium function, the absence of twisting the right ventricle, and the reduction in cardiopulmonary bypass time. The pericardium serves important mechanical functions as a constraint to ventricular filling and ventricular interaction (16). During LVAD implantation with a thoracotomy approach, the pericardium of the right ventricle remains intact and, for that reason, it may preserve RV function (17). Contrary to the full sternotomy approach, with the minimally invasive technique, the heart remains in place and the pyramidal shape of the right ventricle is preserved. Indeed, the modification of this shape impacts its filling and performance (18). Finally, minimally invasive LVAD implantation is performed with shorter cardiopulmonary bypass time, which directly impacts the incidence of postoperative blood loss and red blood cell transfusions that are well known to be associated with the risk of RVF (11,13,14,19). With the univariate analysis, we observed that the preoperative VIS was associated with an increased risk of postoperative RVF. However, this factor was not associated with this risk in the multivariate analysis, possibly due to our small sample size. Nevertheless, we believe that the VIS must incorporate an overall assessment of the patient before LVAD implantation with particular emphasis on the vasoconstrictive part of this score.

We believe that the thoracotomy approach for LVAD implantation is the only truly less invasive technique compared to the other minimally invasive techniques used in cardiac surgery. Indeed, we have easy direct access to the left ventricular apex and ascending aorta for placement of the LVAD, and the surgery can be performed off-pump or with a significant reduction in cardiopulmonary bypass time compared to the full sternotomy approach (11,13,14).

The incidence of RVF ranges from 9% to 51% in the literature (2,3). An explanation for this significant variance may be related to the definition of right ventricular hypertrophy (RVH) used, the preoperative patient characteristics, the indication (BTT or DT) and the type of LVAD implanted (pulsatile flow or continuous flow) (2,3). When comparing the preoperative characteristics of our population to the EUROMACS registry, our patients were older, more frequently categorized as INTERMACS profiles 1 and 2 and more often received a DT device strategy (20). These differences explain our prevalence of RVF and that approximately one-third of our patients were on preoperative, short-term, mechanical support.

Our results confirmed prior studies of the impact of RVF after LVAD implantation on hospital mortality and long-term survival (2,3,19). In a recent study, Han et al. demonstrated that early postoperative VIS is a significant predictor of hospital mortality with an odds ratio of 1.06 per unit increase in VIS (7). These results are in good agreement with our study. Indeed, the VIS was significantly increased in the RVF group compared to the control group on the first postoperative day and was related to a significant increase in the lactate level. Several studies have demonstrated, as in our study, that patients with RVF are at risk of multiorgan dysfunction and acute kidney injury (19,21). Our study confirmed that, in patients presenting with RVF after LVAD implantation, stroke incidence is significantly increased (19). This finding may be explained by the need to support the failing right ventricle with a temporary mechanical support, which makes management of postoperative haemostasis particularly difficult.

This study had several limitations. This study was a retrospective, single-center, observational study that compared two surgical techniques performed consecutively without randomization. Our results will need to be confirmed with a prospective, multicenter, randomized study. We had a small sample size that included mostly critically ill patients. A larger sample size would have been powered for the statistical analysis.

We thank Mrs. Marie Tyman Heinrich for her help in collecting data.

Conflicts of Interest: All authors have completed the ICMJE uniform disclosure form (available at http://dx.doi.org/10.21037/jtd.2020.02.32). The authors have no conflicts of interest to declare.

Ethical Statement: The authors are accountable for all aspects of the work to ensure that questions related to the accuracy or integrity of any part of the work are appropriately investigated and resolved. The Institutional Review Board approved study procedures. The study was approved by institutional ethic committee of the University Hospitals of Strasbourg.