Acute myocardial infarction (AMI) is the one of the leading causes of morbidity and mortality worldwide. At present, the diagnosis of AMI mainly depends on clinical symptoms, electrocardiographic (ECG) changes and circulating biomarkers. As clinical presentations and echocardiographic findings are often nonspecific in patients with chest pain, cardiac biomarkers are more important for the diagnosis of AMI. Current biomarkers including CK-MB and troponins have been widely applied to the clinical diagnosis of AMI, but they have several shortcomings such as slow-release patterns or limitations in specificity (1-3). It is therefore necessary to seek new more sensitive and specific biomarkers of AMI.

MicroRNA (miRNA) is a type of small molecular non-coding RNA with the length about 21-25 nucleotides (4). Accumulating evidence has indicated that miRNAs play a key role in various diseases such as leukemia, progressive liver disease, and neurodegenerative diseases (5-7). In addition, miRNAs were shown to be very stable in circulating blood (8), and the levels of individual miRNA and specific miRNA signatures were reported to be associated with the diagnosis and prognosis of cardiovascular diseases (9). Some recent studies (10,11) have demonstrated that miRNAs, including miR-1, miR-133a and miR-208a, are cardio- or skeletal- muscle specific, and therefore have been proposed as candidate biomarkers for myocardial infarction.

Our prophase study showed that microR-499 (miR-499) released into the circulation during AMI and could be used to detect and monitor the myocardial injury (12). Most studies have focused on the acute phase of myocardial infarction. The present study intended to detect miR-499 levels in AMI patients, and see whether miR-499 is associated with the severity and extent of coronary stenotic lesions and observe changes in plasma miR-499 during emergency percutaneous coronary intervention (PCI).

In this study, 73 patients with acute coronary syndrome (ACS), including 53 patients with AMI and 20 patients with unstable angina (UA), who were admitted to emergency and cardiology departments in Wuxi Second People’s Hospital (Wuxi, China) between January 2013 and December 2013. All of these patients were consecutively included from the admitted patients. The inclusion criteria for patients with AMI were based on the newly developed universal definition of MI (13). Briefly, patients with AMI were clinically diagnosed by biochemical markers (cTnI >0.1 ng/mL), acute ischemic-type chest pain, ECG changes, and coronary angiography. The diagnostic criteria for UA were as follows: chest pain with an accelerating pattern or a prolonged duration (>20 min) or recurrent episodes at rest or with minimal effort and ischemic ECG changes such as ST-segment elevation, ST-segment depression of 0.1 mV, or T-wave inversion in at least two contiguous ECG leads. In addition, 30 healthy adult volunteers who underwent routine physical examinations in our hospital were enrolled as the control. Patient characteristics and clinical features are described in Table 1. 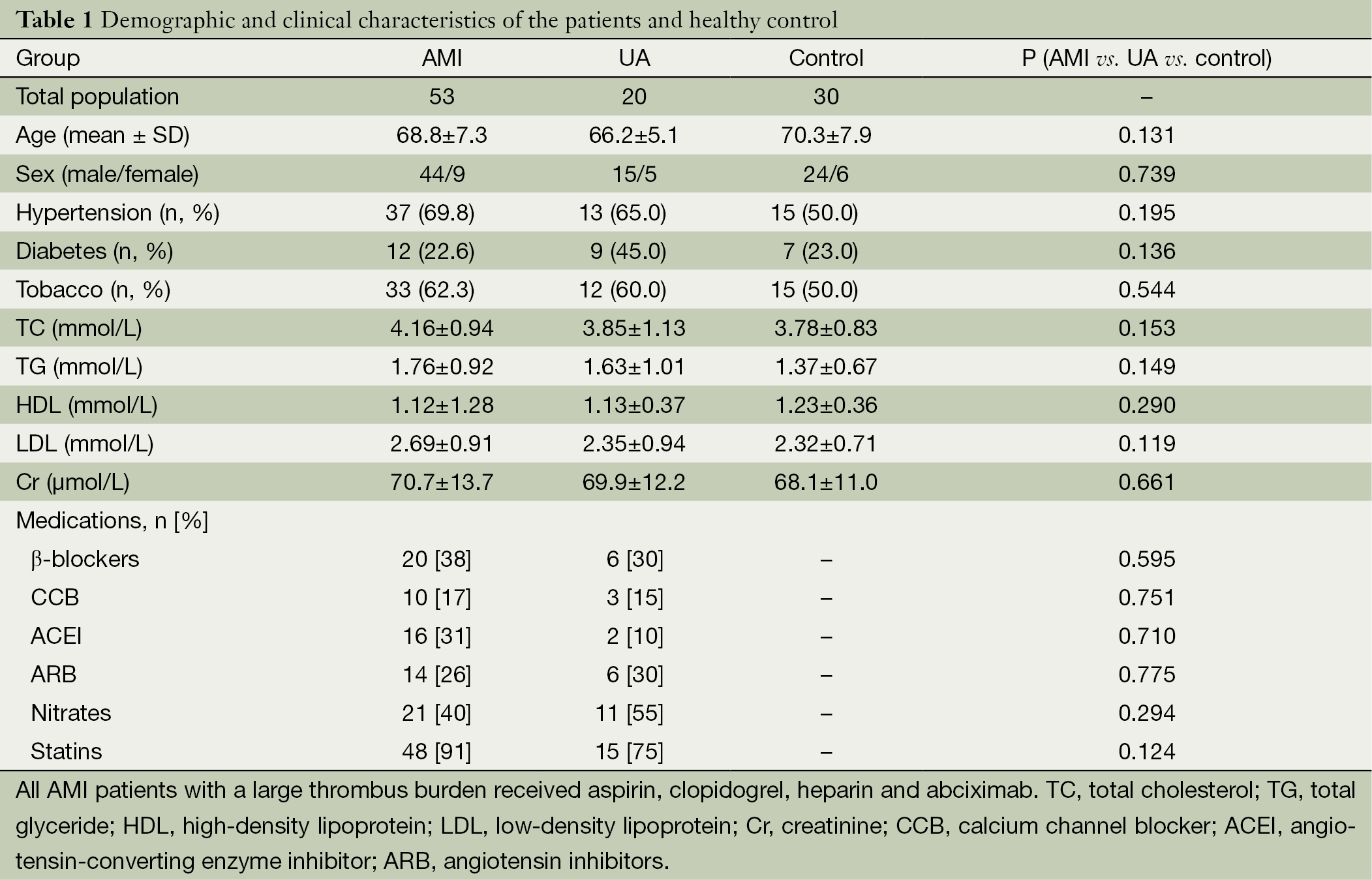 The research protocol was recognized by the Ethics Committee in Wuxi Second People’s Hospital. Informed consent was obtained from all subjects before initiation of the study.

Plasma samples in AMI group were obtained immediately after admission and at 12 h, 24 h, 72 h and 7 d after onset of the symptoms. The duration between the onset chest pain and arrival at the emergency room was 4.46±3.36 h. Blood samples in UA group were collected immediately after admission. All plasma samples (3-5 mL) were extracted from citrated tubes and stored at −80 °C.

All coronary angiograms were performed by experienced investigators who were blinded to the study, using transradial or transfemoral approaches. At least four projections of the left anterior descending artery and the circumflex artery and two projections of the right coronary artery were taken into consideration. CAD was defined as the presence of one or more coronary stenoses with lumen narrowing more than 50% in a given patient. The extent of CAD was coded as 0, 1, 2, or 3 or more depending on the number of major coronary vessels with luminal stenosis more than 50%. Left main coronary artery stenosis 50% was considered as a two vessel disease.

The data were analyzed with automatic setting for assigning baseline; the threshold cycle (Ct) was defined as the fractional cycle number at which the fluorescence exceeds the given threshold. The Ct values from real-time PCR assays greater than 40 were treated as 40. The plasma levels of miRNA were detected and analyzed by two investigators who were blinded to the clinical data of the patients. Expression values were normalized by using the mean Ct, and the data obtained by real-time PCR were translated in log2 (relative level) (15,16).

Experimental data are expressed as the mean ± standard deviation (±s). Before the analyses, all data were subjected to a normality test (Shapiro-Wilk). The Kruskal-Wallis H test or one-way ANOVA were used to compare data between the three groups, and the LSD t-test was used for inter-group comparisons. To assess whether the time courses of miR-499 expression differed, we compared them by repeated measures ANOVA. Correlations between two variables were determined by the Spearman tests. Statistical analyses were performed with the SPSS statistical package. P values <0.05 were considered statistically significant.

This study included 53 AMI patients, 20 UA patients, and 30 healthy controls. The baseline clinical characteristics of the groups are shown in Table 1. There were no significant differences in the clinical characteristics of the patients between the three groups. Blood samples were obtained from each AMI patient at various time points (T0 h, 12 h, 24 h, 72 h, and 7 d) after the onset of AMI. The first plasma sample was obtained immediately after admission (T0 h). The average duration between the onset of chest pain and arrival at the emergency room was 4.46±3.36 h. As shown in Figure 1A, plasma samples in AMI, UA and healthy groups were drawn immediately after admission, the relative level of plasma miR-499 in 53 patients with AMI (5.12±2.29) was significantly higher than that in UA group (2.75±1.39) and healthy control group (0.50±0.35), and the differences were statistically significant (P<0.01). We also investigate the time course of plasma miR-499 levels in AMI patients (Figure 1B). The relative level of plasma miR-499 was 5.40±2.24, 3.47±2.43, 2.11±2.88 and 0.77±2.86 at 12 h, 24 h, 72 h and 7 d after onset of symptoms respectively, and returned to the baseline level after 7 d, when it was not significantly different from that in healthy control group (P>0.05). Furthermore, correlation analysis showed a positive correlation between circulating levels of miR-499 and cTnI concentrations in AMI patients (Figure 1C, r=0.384, P<0.01), as well as between miR-499 and CK-MB (Figure 1D, r=0.402, P<0.01). These data suggested that circulating miR-499 might be regarded as a novel biomarker of AMI. 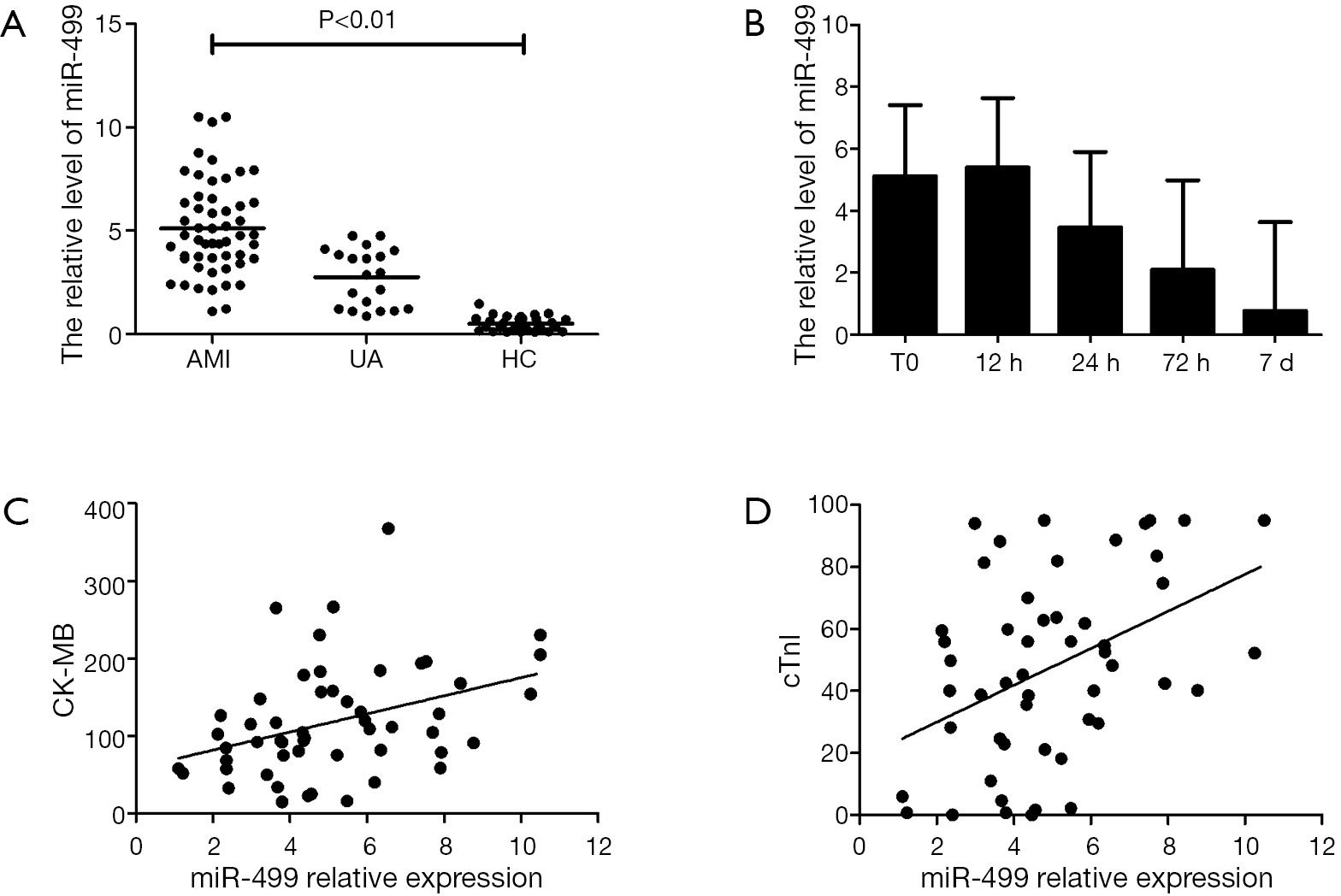 MicroRNA (miRNA)-499 and the severity of coronary atherosclerosis

Of the 53 AMI patients, 42 patients underwent coronary angiography, who were divided into three subgroups according to the number of affected branches (n=1, 2 and 3). The relative level of miR-499 was 3.82±1.98, 5.53±2.62 and 5.92±1.97, respectively. It was higher in two- and three-vessel CAD than that in single-vessel CAD (P<0.05) (Figure 2A). The Gensini scoring system was used to evaluate the severity and extent of coronary stenotic lesions in the 42 AMI patients by coronary angiography. Spearman’s correlation analysis showed that plasma miR-499 was positively correlated with the severity of coronary stenosis (r=0.52, P<0.01) (Figure 2B). 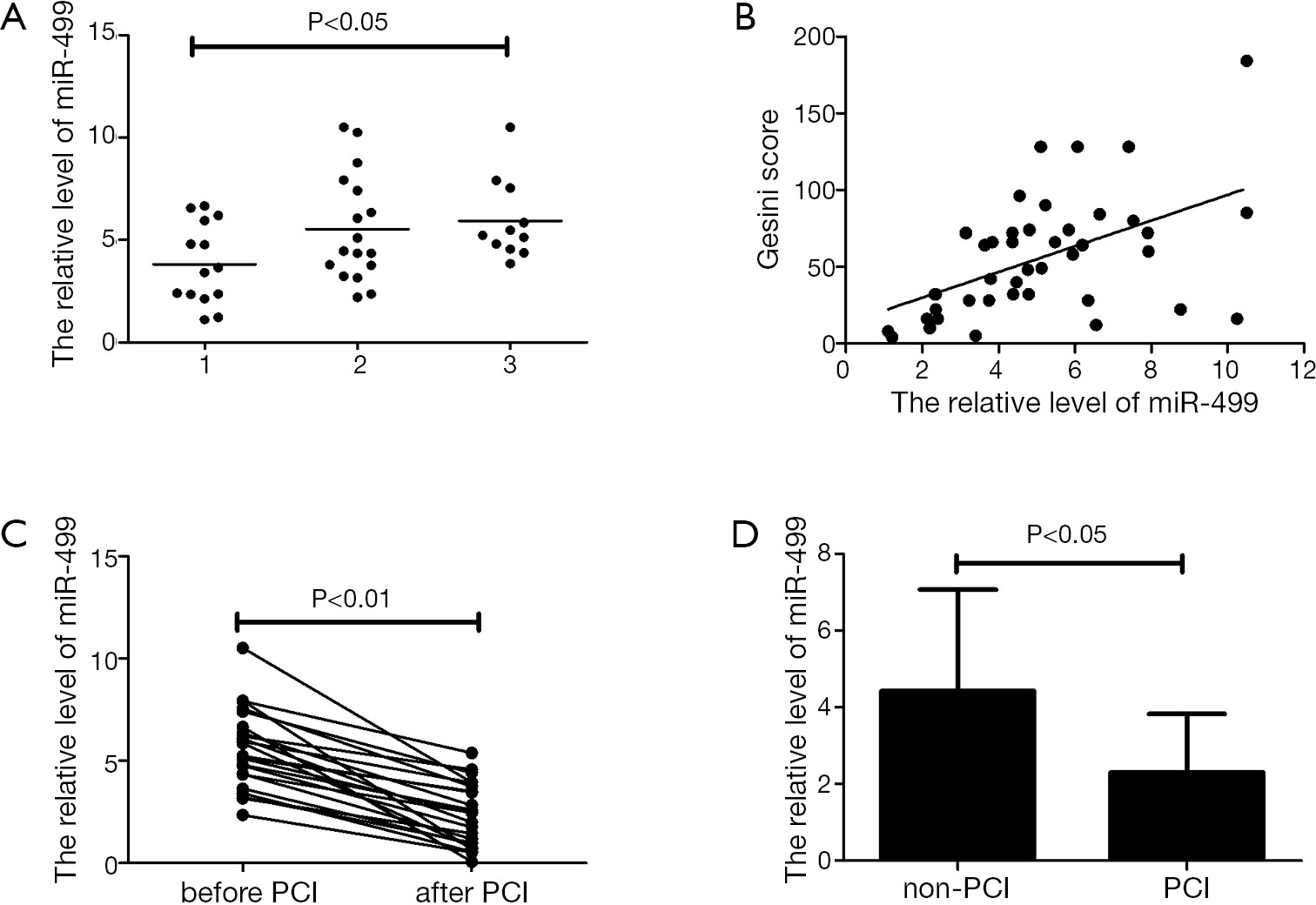 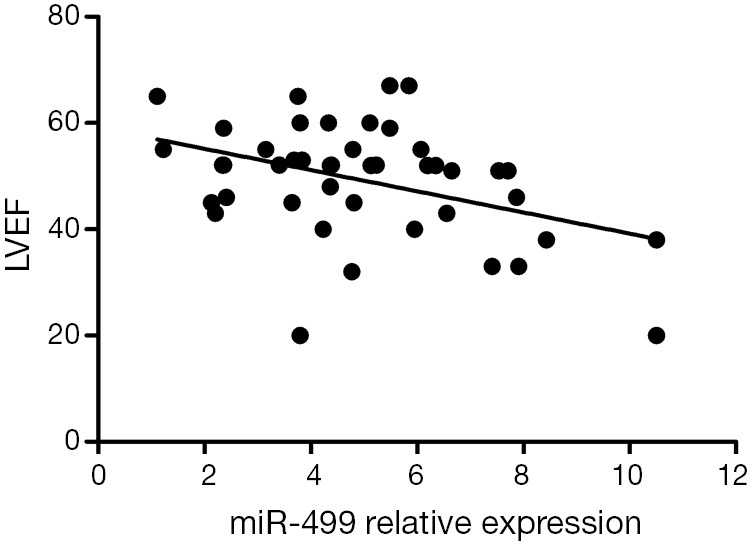 Recent studies (16-18) have shown that miR-499 may be a clinically practicable biomarker for AMI. Adachi et al. (17) proposed that miR-499 level was increased significantly at 6 and 12 h after myocardial infarction. Devaux et al. (16) found that miR-499 level was elevated significantly in AMI patients within 3 h after chest pain and was positively correlated with hs-cTnT, the positive rate of miR-499 being 93%. Olivieri et al. (18) found that plasma miR-499-5p in elderly NSTEMI patients was nearly 80-fold that in healthy control group, and its sensitivity and specificity were significantly higher than hs-TnT. However, these studies mostly focused on the acute phase of myocardial infarction. An ideal biomarker should not only have sensitivity and specificity but be measureable with respect to myocardial damage (19). Our study aimed to investigate the kinetics of plasma cardiac-specific miR-499 in AMI and see whether it is associated with the severity and extent of coronary stenotic lesions.

In our study, we found that plasma miR-499 levels significantly increased in the AMI group within 12 h after the onset of symptoms, and eventually returned to baseline levels, which were not significantly different from those in the healthy control group, suggesting that cardiac-specific miR-499 might be released into the blood circulation from the necrotic myocardium in the early stage of AMI and then change along with the progression of AMI. Correlation analysis showed a positive correlation between circulating levels of miR-499 and cTnI, as well as CK-MB, which is consistent with their cardiac expression and release from the injured heart. In addition, plasma miR-499 levels in UA patients were higher than those in the control group, which may be due to increased release from cardiomyocytes in the ischemic myocardial tissue. However, Widera et al. (11) proposed that there was no difference in the levels of miR-499 between UA and AMI patients. miR-499 levels are considered to be dynamic in the plasma, thus, we were concerned that the blood samples were taken too early to observe the change in miR-499 levels in their study.

Additionally, we investigated the correlation between the severity of CAD and miR-499 and found that the level of miR-499 in two- and three-vessel CAD was significantly higher than that in single-vessel CAD. In addition, we used Gensini score to assess the severity of CAD in AMI patients and found that plasma miR-499 was positively correlated with the severity of coronary stenosis. Meanwhile, we found that higher severity of the coronary artery of AMI patient represents a higher risk of myocardial ischemia. This positive correlation between Gensini score and miR-499 level further suggest that miR-499 release from myocardial cells may reflect the risk of the occurrence of myocardial ischemia. Therefore, miR-499 may prove to be a useful marker for predicting the risk of myocardial ischemia and serve as a warning sign for the prevention and early intervention of AMI.

Finally, we found that plasma miR-499 levels in AMI patients 24 h after emergency PCI were significantly lower than those at admission, further, plasma miR-499 levels were significantly lower 24 h after the onset of symptoms in the emergency PCI group than those in the non-PCI group. Emergency PCI is said to be associated with a high rate of patency of the infarct-related artery, and effective reperfusion of the occluded coronary artery could reduce myocardial necrosis (20,21). These finding seem to suggest that miR-499 may be a good biomarker to be measureable in linear proportion to myocardial damage and has an important predictive effect in evaluating myocardial ischemia reperfusion in AMI patients. We also found that miRNA-499 levels were negatively correlated with LVEF, which might indicate poor prognosis and increase the risk of death or the development of heart failure. It remains possible that measuring miRNA-499 levels at later time points would ensure their prognostic value. However, our study did not assess the conditions of the AMI patients at discharge or their follow-up survival. Therefore, further research is needed.