The influenza virus is a single-stranded negative-sense RNA virus belonging to the Orthomyxoviridae family, and can be divided into 4 types: of A, B, C, and D (1,2). Among these types, the influenza A virus (IAV) is the dominant pathogen. IAV is prone to antigenic variation, so it is seasonally prevalent every year. According to the latest report, influenza causes 290,000 to 650,000 deaths every year, and is a serious threat to human health (3). A universal influenza vaccine has not yet been developed although influenza type- and subtype-specific vaccine can be developed. Given this, considerable time and money have been expended to predict the prevalent strains and formulate effective vaccines (4). Among these measures, adamantanes and neuraminidase (NA) inhibitors are 2 classes of antiviral drugs that have been approved for treatment of influenza virus infections. However, influenza virus resistance to these drugs is a significant concern (5-7). There is therefore an urgent need for an effective strategy that can control the influenza virus.

Respiratory epithelium cells serve as the first line of defense against the influenza virus and culminate in the production of interferon (IFN), a key molecule in the antiviral innate immune response (8,9). However, the virulence factors of the influenza virus can antagonize the IFN immune response and promote influenza virus infection (10). Therefore, inducing IFN expression may be an effective strategy against the influenza virus. (-)-Epigallocatechin-3-gallate (EGCG) is the most abundant and bioactive catechin in green tea (11). Previous studies have revealed that EGCG exhibits affects against viral infection, including against the human immunodeficiency virus (HIV) (12), the herpes simplex virus (HSV) (13), the hepatitis B virus (HBV) (14), the hepatitis C virus (HCV) (15), and the Zika virus (16). It has been shown that EGCG enhances virus dsRNA or poly I:C-induced IFN-λ1 production and inhibits HCV replication (17,18). Although many studies have reported that EGCG has anti-influenza-virus effects (19), whether EGCG can induce IFN-λ expression in airway epithelial cells to suppress the influenza virus and related signaling pathways has not been elucidated at this stage.

In this study, we used the tracheal epithelial cells (BEAS-2B) as model to investigate EGCG’s anti-IAV effects and mechanisms. The results confirmed that EGCG can induce IFN-λ2 expression through p38 MAPK signaling pathway, but not through the ERK and JNK signaling pathways. It was also found that IFN-λ2 neutralizing antibody attenuated the role of EGCG inhibiting the expression of H1N1 nucleoprotein (NP) gene and protein. These findings provide some insight into the mechanisms behind EGCG’s anti-IAV (H1N1) activity.

IAV samples (A/PR/8/34 H1N1, PR8) were purchased from the National Influenza Center, National Institute for Viral Disease Control and Prevention Chinese Center for Disease Control and Prevention (Beijing, China), and were amplified in the allantoic cavity of embryonated eggs for 48 h at 37 °C, and were stored after at −80 °C. Viral titers were determined by calculating the 50% tissue culture infectious dose (TCID50) per milliliter using the Reed–Muench method in MDCK cells.

The BEAS-2B cells in 96-well plates were treated with different concentrations EGCG for 48 h. After that, 20 µL/well Counting Kit-8 (CCK8) (Dojindo, Kumamoto, Japan) was added into each well and incubated for 2 h at 37 °C. Then, the absorbance was read at 450 nm on a microplate reader (Bio-Tec Instruments, Burlington, VT, USA). The cell viability rate was calculated using the following formula: cell viability rate = [(ODEGCG (0-100µg/mL) – ODzeroing) / (ODEGCG (0µg/mL) – ODzeroing)] × 100%.

GAPDH was used as the reference gene for normalizing and determining the fold change in the expression of IFN-λ2 and NP mRNA, which was calculated using the 2(-Delta Delta Ct) method.

After stimulation, the supernatants were gently collected to determine the protein concentrations of IFN-λ2 using commercially available ELISA kits (Elabscience, Wuhan, China) according to the manufacturer’s instructions.

Data are represented as means ± standard deviations (SD) of results from the 3 independent experiments with similar patterns. Significant differences between the indicated groups were determined by Student’s t-test and one-way analysis of variance (ANOVA) using GraphPad Prism 5.0 software (GraphPad, San Diego, CA, USA). For all experiments, P<0.05 was considered a statistically significant value.

Cytotoxicity of EGCG on BEAS-2B cells 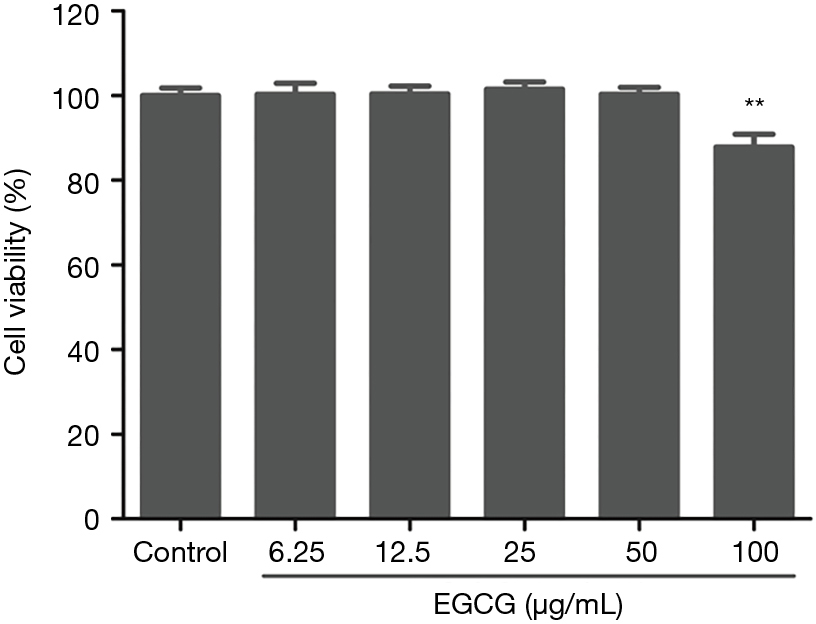 After detecting a concentration range in which EGCG is not cytotoxic to BEAS-2B cells, we next sought to determine the time and dose dependency that EGCG induces IFN-λ2 expression in BEAS-2B cells. Cells were treated with EGCG. The expression level of the IFN-λ2 mRNA was analyzed by qRT-PCR, and expression level of the IFN-λ2 protein was analyzed by ELISA. We found that both IFN-λ2 mRNA and protein levels were significantly up-regulated in BEAS-2B cells in a dose- and time-dependent manner after being treated with EGCG (Figures 2,3).

As the stimulation with 50 µg/mL of EGCG showed the strongest response in inducing the expression of IFN-λ2, we next selected 50 µg/mL EGCG to determine the signal pathways in which EGCG induces IFN-λ2 expression in BEAS-2B cells. BEAS-2B cells were treated with 50 µg/mL EGCG for 0, 2, 4, 12, 24, and 48 h, and we then determined the effect of EGCG on the activation of ERK, p38 MAPK, and JNK in BEAS-2B cells by western blot. As shown in Figure 4, the total ERK, p38 MAPK, and JNK levels had no effect after 50 µg/mL of EGCG treatment, but the phosphorylated (activation) ERK, p38 MAPK, and JNK levels were significantly up-regulated. The activation time of ERK and JNK occurred at 2 to 12 h, and that of p38 MAPK occurred at 2 to 24 h, following the treatment with EGCG. The result confirmed that EGCG can activate p38 MAPK, ERK, and JNK signaling pathways in BEAS-2B cells (Figure 4). Next, we tested the functions of p38 MAPK, ERK, and JNK signaling pathways in EGCG-induced IFN-λ2 mRNA and protein expression. The BEAS-2B cells were pretreated with 20 µM SB203580, 20 µM U0126, or 10 µM SP600125 for 1 h, after which time the 50 µg/mL of EGCG was mixed with the cells for 4 h. We found that pretreatment with SB203580 significantly inhibited EGCG-induced IFN-λ2 mRNA and protein expression, whereas pretreatment with U0126 and SP600125 did not show inhibition (Figure 5). 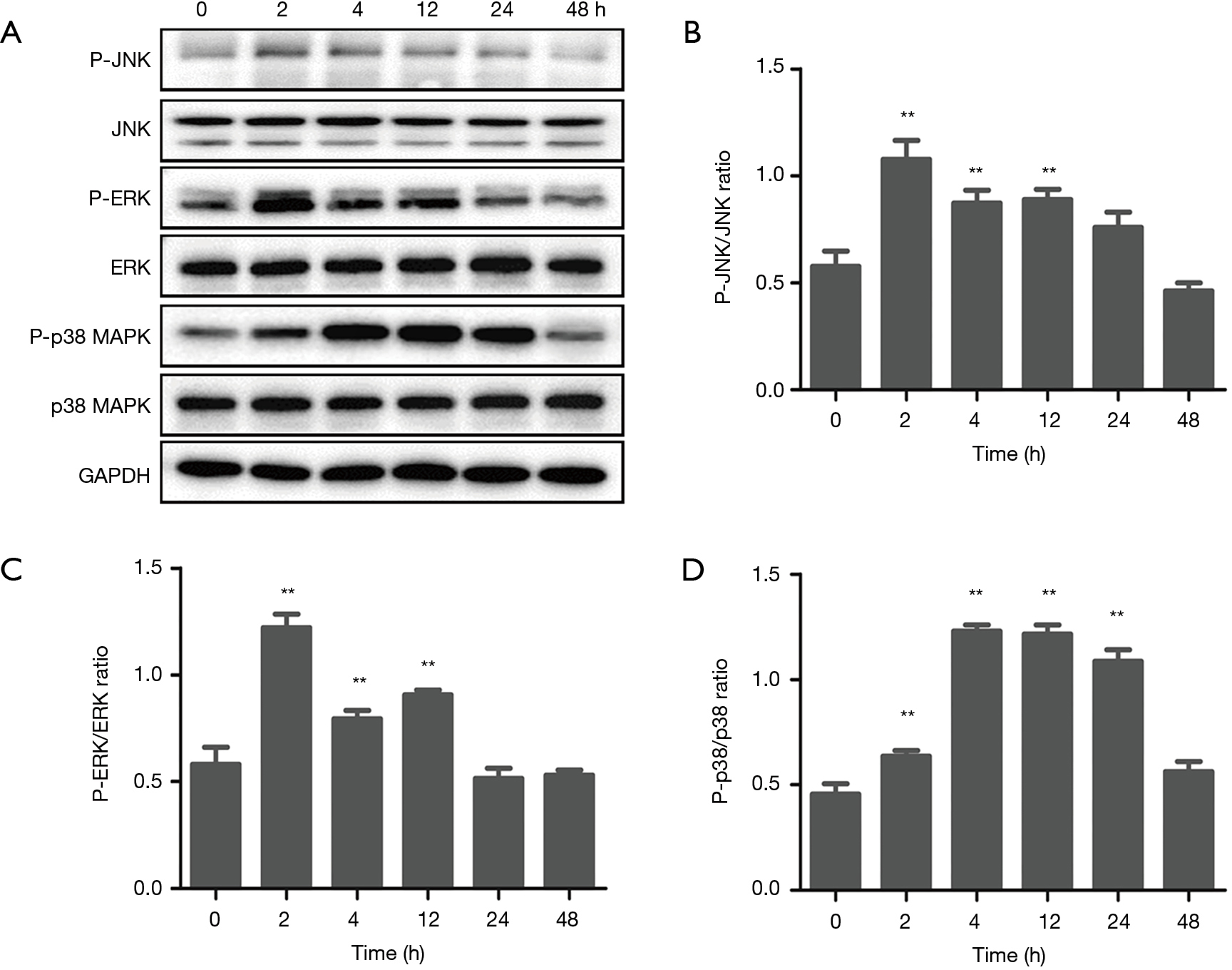 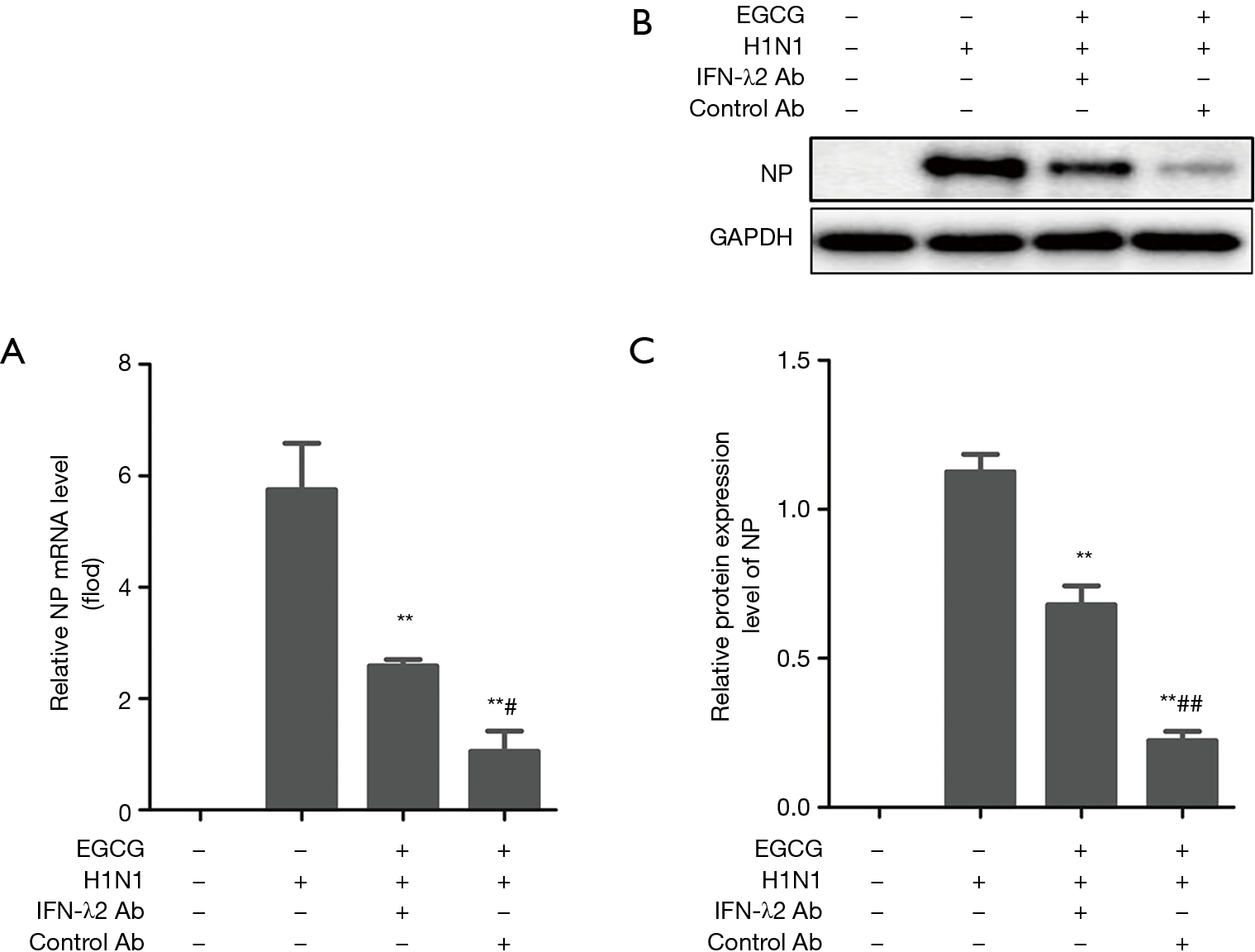 Green tea has been regarded as a health product for more than 2000 years and is a major source of polyphenol antioxidants (20,21). Green tea catechins, especially the main catechin found in green tea, epigallocate-chin-3-gallate (EGCG) have demonstrated anti-viral and anti-inflammatory properties (22). In the previous study, EGCG was found to inhibit influenza viral replication by damaging the physical properties of the viral envelope and partial inhibition of the NA surface glycoprotein (19). However, the immune regulation mechanisms of EGCG’ anti-IAV effects remain unclear. To our knowledge, this is the first study to demonstrate that EGCG up-regulates IFN-λ2 expression through p38 MAPK signaling pathway and inhibits IAV H1N1 replication in BEAS-2B cells.

The IFN-λ family, also known as type III IFN, includes the IFN-λ1, IFN-λ2, and IFN-λ3 members (22,23). In mice, only IFN-λ2 and IFN-λ3 are expressed (24). IFN-λ plays an important role in combating pathogen infection, has been shown to have protective effects against IAV infection, and to contribute to local anti-IAV innate immunity (25,26). More excitingly, the effect of IFN-λ against the IAV is better than that of type I IFN (27). However, the cost of directly using IFN-λ to treat influenza virus is high, and plant extracts have the advantage of low toxicity, easy availability, and being economical. In the previous study, the crude phenylethanoid glycosides isolated from Ligustrum purpurascens via inducing endogenous IFN-γ had an anti-viral effect against the IAV (28). In other studies, EGCG inhibited HCV replication by enhancing virus dsRNA or poly I:C-induced IFN-λ1 production (17,18). Consequently, these studies provided us with new ideas. In the present study, we used EGCG to treat BEAS-2Bs, with the results showing that EGCG significantly up-regulated IFN-λ2 mRNA and protein levels in BEAS-2B cells. Therefore, we confirmed that EGCG can induce IFN-λ2 production in BEAS-2B cells.

In addition, we also explored the mechanisms of EGCG-induced IFN λ2 expression in BEAS-2B cells. The MAPKs in mammals include c-Jun NH2-terminal kinase (JNK), p38 mitogen-activated protein kinase (p38 MAPK), and extracellular signal-regulated kinase (ERK). These enzymes are serine-threonine protein kinases that regulate various cellular activities including proliferation, differentiation, apoptosis or survival, inflammation, and innate immunity (29). EGCG treatment was able to induce NB4 cell apoptosis by increasing phosphorylated (p)-p38α MAPK expression (30). In addition, other studies have found that EGCG also regulates ERK and JNK signaling pathways (31,32). In the present study, we found that EGCG could significantly increase P-p38 MAPK, P-ERK, and P-JNK levels, and activate P38 MAPK, ERK, and JNK signaling pathways. Furthermore, p38 MAPK, ERK, or JNK inhibitor was used to inhibit signaling pathways: p38 MAPK inhibitor significantly decreased the EGCG-induced expression level of IFN-λ2 in BEAS-2B cells, while the ERK and JNK inhibitors had no effects. Our result is similar to the other study which also has demonstrated that IFN-λ1 was regulated by p38 MAPKα (33). Accordingly, our study has demonstrated that EGCG can induce the expression of IFN-λ2 through the p38 MAPK signaling pathway in BEAS-2B cells.