Polysomnographic phenotype as a risk factor for cardiovascular diseases in patients with obstructive sleep apnea syndrome: a retrospective cohort study

Obstructive sleep apnea syndrome (OSAS) is defined as a combination of symptoms and polysomnographic findings that include apneas, hypopneas, and respiratory effort-related arousal (RERA) (1). OSAS patients have high prevalence rates of obesity, hypertension, and diabetes, all of which are risk factors for cardiovascular disease, and hypoxemia during sleep is also closely related to cardiovascular disease (2). Furthermore, OSAS is associated with other cardiovascular issues, such as coronary artery disease, atrial fibrillation, congestive heart failure, and resistant hypertension, and it has been observed that the prevalence of OSAS increases with the severity of these diseases (3).

It was recently suggested that OSAS is a heterogeneous disease with different clinical features, risk factors, and pathogeneses that depend on the specific phenotype, and as a result, various therapeutic approaches for treating OSAS are being considered (4). Previous studies have reported that the apnea-hypopnea index (AHI) during rapid eye movement (REM) sleep is independently associated with incidents of non-dipping of blood pressure and dyslipidemia (5). Severe sleep apnea during REM sleep may be associated with early signs of atherosclerosis, defined as increased intima thickness (6).

However, few studies have investigated the clinical features of OSAS using phenotypes based on polysomnographic findings.

This study assessed patients who were 18 years of age or older, evaluated due to suspicion of sleep-disordered breathing (SDB), and had undergone overnight level 1 polysomnography in the sleep Laboratory of Wonju Severance Christian Hospital (tertiary university hospital) between November 2008 and February 2018 (Figure 1). Polysomnography was conducted in 930 patients, of whom 14 were younger than 18 years of age and were excluded from the study and 56 were patients with indications other than SDB (17 cases of hypersomnia, 24 cases of parasomnia, four cases of sleep-related movement disorders, and 11 cases of insomnia). Thus, a total of 860 SDB patients were included in the final analyses. All procedures performed in studies involving human participants were in accordance with the ethical standards of the Wonju Severance Christian Hospital Institutional Review Board (CR318006). 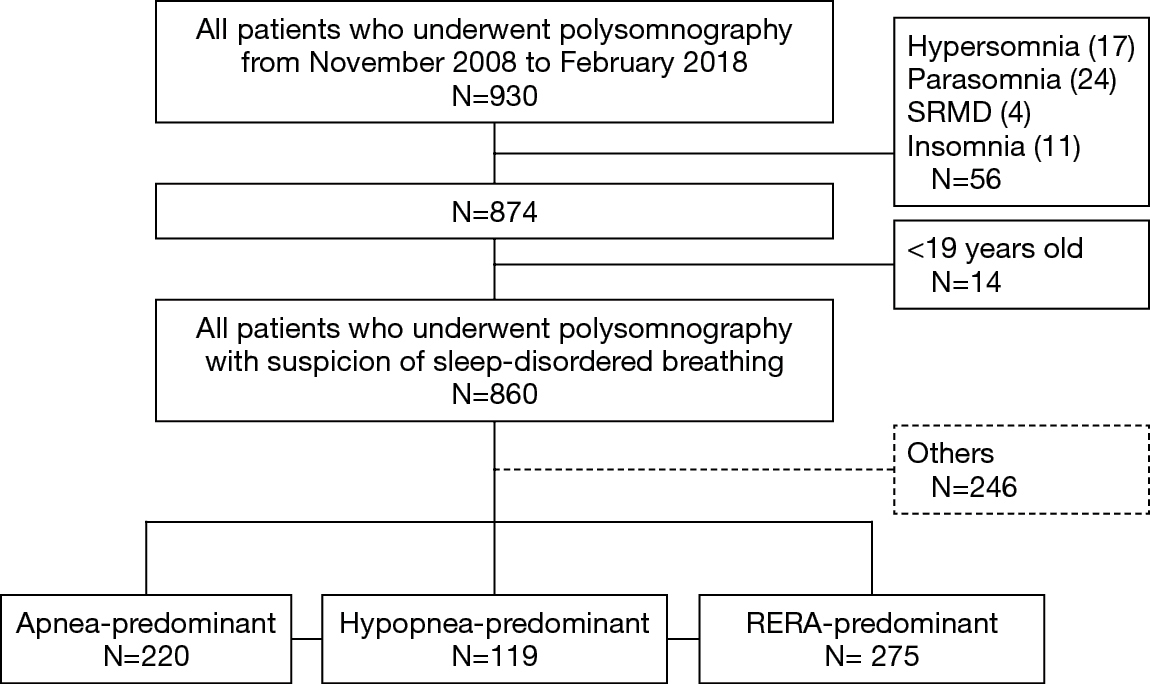 Definition of phenotypes and classification of patient groups

Collection of clinical information and risk factors for cardiovascular diseases

The relevant clinical data of all patients were collected during a review of electronic medical records and included clinical features and sleep-related self-reported questionnaires that were evaluated prior to the sleep study. Demographic information included age, height, weight, body mass index (BMI), and smoking history, and medical history information included comorbidity with diabetes, hypertension, hyperlipidemia, heart failure, and/or coronary artery disease. In the case of coronary artery disease, relevant data were only included if a patient was hospitalized for myocardial infarction or unstable angina or if they underwent unplanned coronary angiography, cardiovascular angiocardiography, or computed tomography imaging.

Differences in demographic variables according to OSAS phenotype, medical history, and characteristics of the polysomnographic findings are expressed as the mean ± standard deviation (SD) for continuous variables. Chi-square tests were used to assess nominal variables, and analysis of variance was conducted for comparative analyses of the three groups. Variables that were significantly related to the prevalence of a comorbidity were assessed with logistic regression analyses to estimate the odds ratio (OR) for comorbidity with cardiovascular and cerebrovascular diseases. Significant independent variables were confirmed with multivariate analyses adjusted for other variables. All statistical analyses were performed using SPSS version 24.0, and P<0.05 was considered statistically significant.

Clinical features according to OSAS phenotype 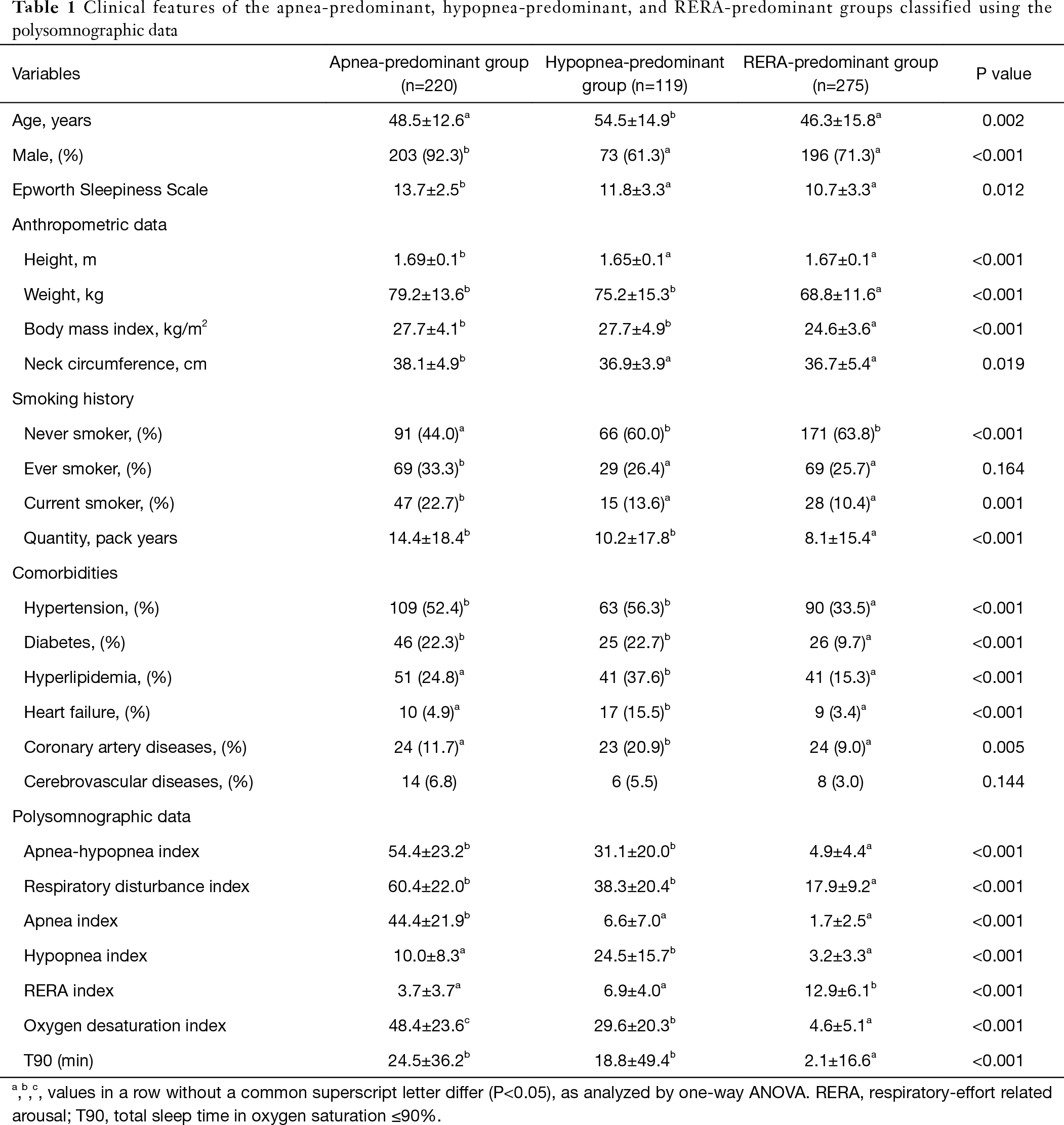 Risk for heart failure according to the hypopnea index (Table 4)

OSAS is independently associated with metabolic syndrome, which is closely related to cardiovascular diseases (9). OSA is also an independent risk factor for coronary artery calcification, an important factor in predicting cardiovascular disease (10). In addition, it has been reported that patients requiring interventions to treat coronary artery disease were at higher risks of death, myocardial infarction, stroke, repeat revascularization, or heart failure (11).

Also, oxidative stress caused by hypoxia can trigger systemic inflammation and vascular endothelial cell dysfunction, in turn causing ischemic heart disease, such as myocardial infarction, by inducing atherosclerotic changes in blood vessels (21,22). An excessive increase in intrathoracic pressure imposes mechanical stress on the walls of the large blood vessels of the heart, or creates aortic aneurysms, which in turn trigger arrhythmia (23). Notably, another study on the effect of OSAS on cerebrovascular disease confirmed that reduced middle cerebral artery blood flow correlated with decreased oxygen saturation, and a longer duration thereof, reflecting obstructive hypopnea rather than obstructive apnea or central apnea (24). This may be why obstructive hypopnea reduces cerebral blood flow more than obstructive apnea; the intermittent hypoxia of hypopnea is more severe than that of apnea.

A limitation of our study is that it was a retrospective analysis of only patients undergoing polysomnography at a single institute. Also, patient numbers were small, and it is thus difficult to define cause-and-effect relationships between OSAS and cardiovascular disease. We did not investigate the hypoxic burden, also known as the desaturation severity parameter, which has been reported to independently raise cardiovascular risk (26). In addition, we did not investigate sleep-related breathing cessation and desaturation, which are known to have greater contributions to daytime sleepiness than AHI (27).

All-cause mortality risk has been reported to be higher in older adult OSA patients with excessive daytime sleepiness (28). In one study, when divided into four subtypes of symptoms, the prevalence of heart failure was more than three times higher in the excessive sleep subtype than other subtypes and the incidence of cardiovascular disease was also high (29). It is necessary to perform follow-up studies on the factors affecting cardiovascular disease in hypopnea itself because the apnea group had a significantly higher ESS score than the hypopnea group in the present study. It is also necessary to analyze OSA patients by dividing them into subgroups according to ESS score in follow-up studies.

Future studies should divide patients according to polysomnographic phenotype, check various parameters, and then track the incidences of cardiovascular and cerebrovascular diseases, which would identify risk factors and predict prognoses after treatment.

Ethical Statement: The authors are accountable for all aspects of the work in ensuring that questions related to the accuracy or integrity of any part of the work are appropriately investigated and resolved. The study was reviewed and approved by the Wonju Severance Christian Hospital Institutional Review Board (CR318006).