Esophageal cancer is the tenth most common cancer worldwide, with approximately 455,800 new cases diagnosed in 2012, and the incidence has been increasing rapidly (1). In South Korea, esophageal cancer accounted for 1.1% (2,413) of all newly diagnosed cancers in 2014 (N=217,057) (2). Esophageal cancer has a relatively poor prognosis, with an overall 5-year survival rate of less than 10%, owing to a lack of initial symptoms and delayed diagnosis (3). Psychological distress is highly prevalent among cancer survivors because of cancer diagnosis, treatment related side effects, and fear of prognosis after treatment (4). Also, psychiatric comorbidities are higher in esophageal cancer survivors than that in the general population (5). Notably, patients with esophageal cancer showed a higher risk of suicide with peaked risk within the first 3 months after diagnosis (6). These psychological problems can result in poor adherence to treatment and could increase mortality in cancer survivors (7).

In addition to other clinical factors such as tumor stage and prognosis, invasive treatment could be a risk factor for psychological distress (8). Esophagectomy for resectable disease is an extensive surgical procedure and is associated with severe side effects (9). Radiation therapy (RT) may also have side effects such as esophagitis, weight loss, fatigue, and anorexia (10). These treatment-related toxicities could have significant negative impact on the psychological status of esophageal cancer survivors (11).

The National Health Insurance (NHI) system is the public medical insurance system of South Korea; it covers almost 98% of the total population (12). The Health Insurance Review and Assessment Service (HIRA) generates data from reimbursement claims for healthcare services given during hospital visits or inpatient admissions. Data include general patient information, healthcare services, diagnosis, outpatient prescription, drug information, and provider information. This study was approved by the institutional review board (IRB) of Ajou University Hospital (IRB No. AJIRB-MED-EXP-16-494). The informed consent was exempted by the board.

In this study, we used the nationwide cohort data of patients diagnosed with esophageal cancer between January 1, 2010 and December 31, 2014. We included those with esophageal cancer classified as category C15 according to the Korean Classification of Disease, sixth edition, which is based on International Classification of Diseases (ICD) 10th Revision and excluded patients aged less than 19 years old. We also used initial treatment procedure codes such as surgery or RT. Information on psychological distress was obtained from the HIRA database based on the primary diagnostic code. Because we aimed to study the patterns of newly emerging psychiatric conditions before and after the start of cancer treatment, we excluded individuals diagnosed with pre-existing mental disorders 1 year or more before the initiation of cancer therapies.

We analyzed the prevalence of psychiatric distress and its longitudinal pattern according to time sequence. Descriptive statistics were employed to estimate the frequency of psychological distress based on the diagnostic date of the psychological distress. Differences in covariate distribution among groups were determined using chi-square test for categorical variables and t-test for continuous variables. A two-sided P value of less than 0.05 was considered statistically significant. Odds ratio (OR) as an estimate of the relative risk for psychological distress associated with clinical factors and 95% confidence intervals (CI) were obtained using multivariate logistic regression. All statistical analyses were performed with R 3.0.2. (R Core Team, 2016, Vienna, Austria). 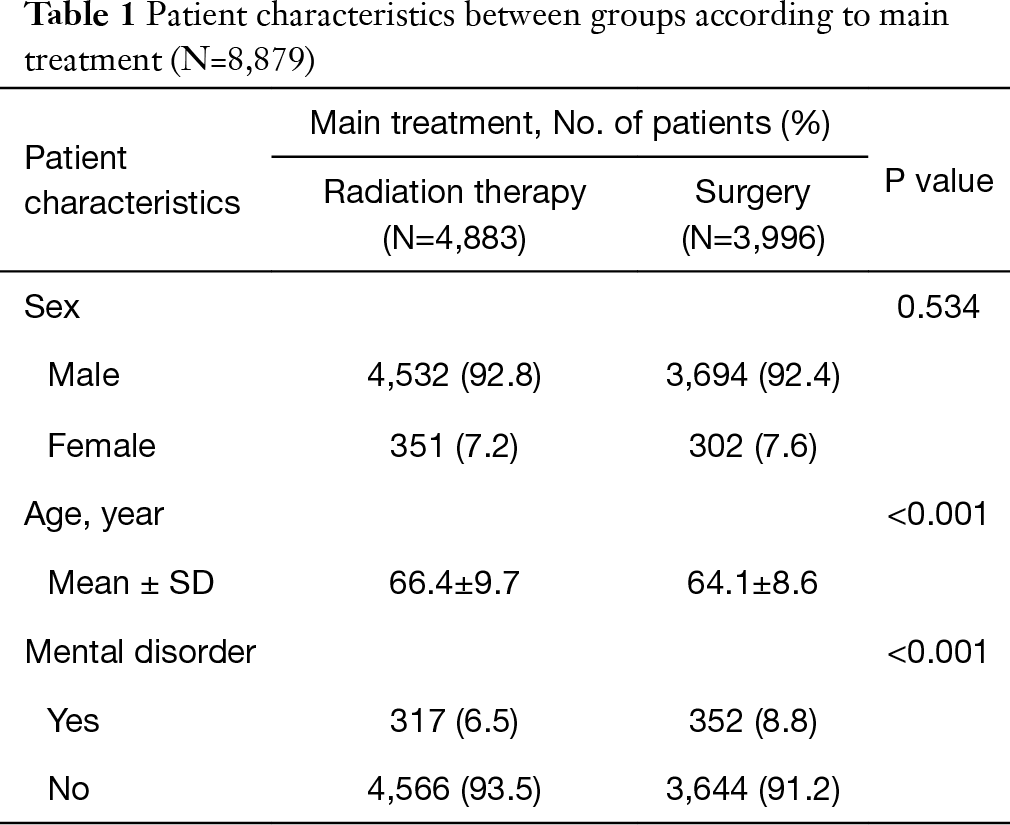 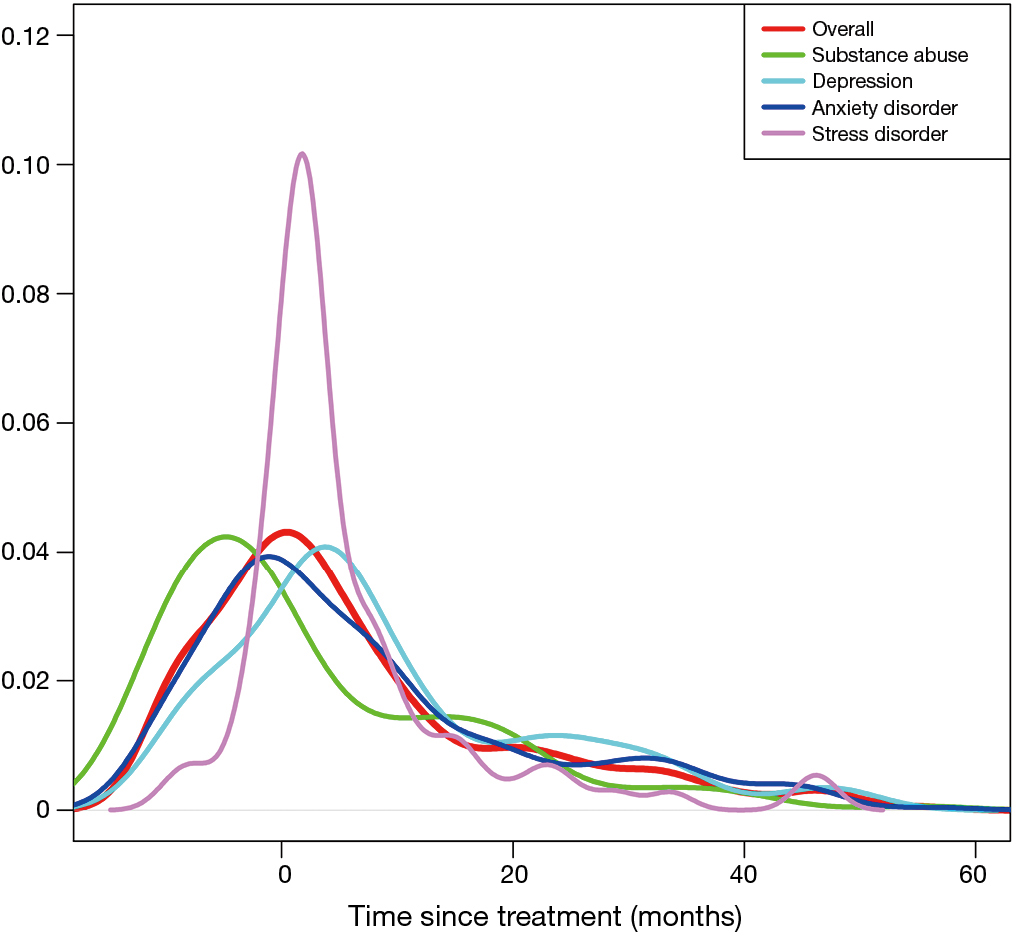 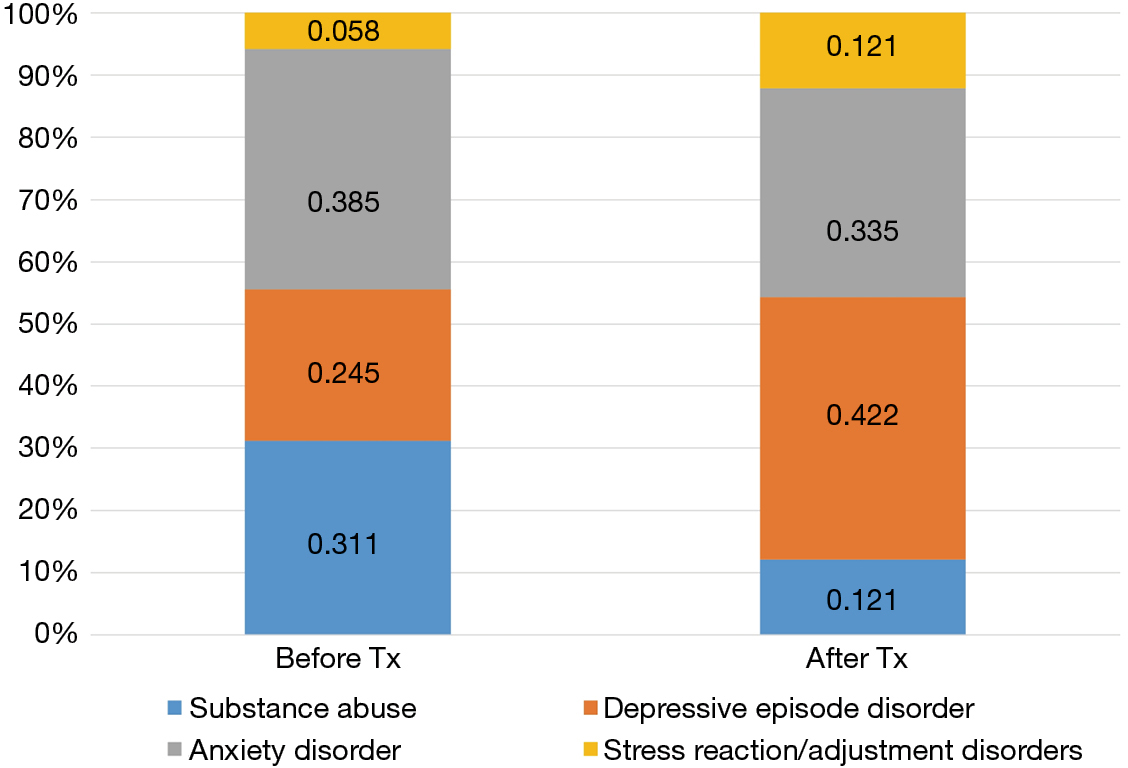 Figure 2 Psychological distress before and after treatment. 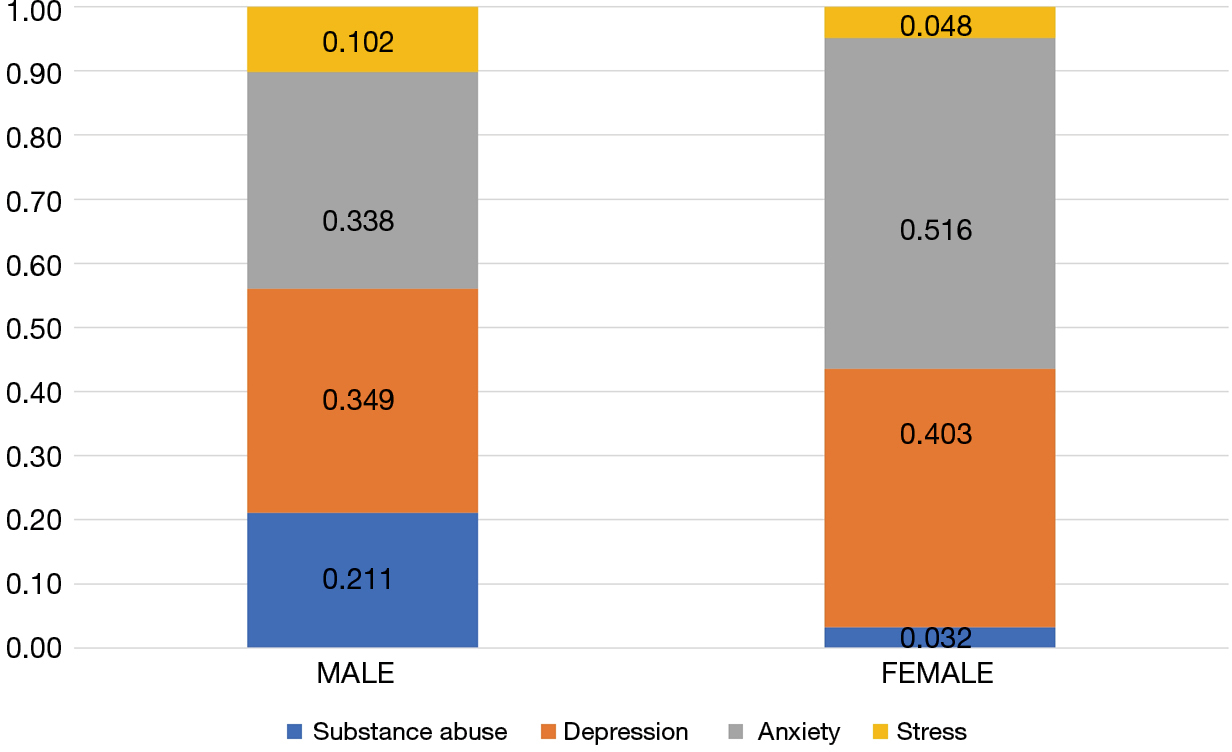 Figure 3 Distribution of psychological distress according to sex. 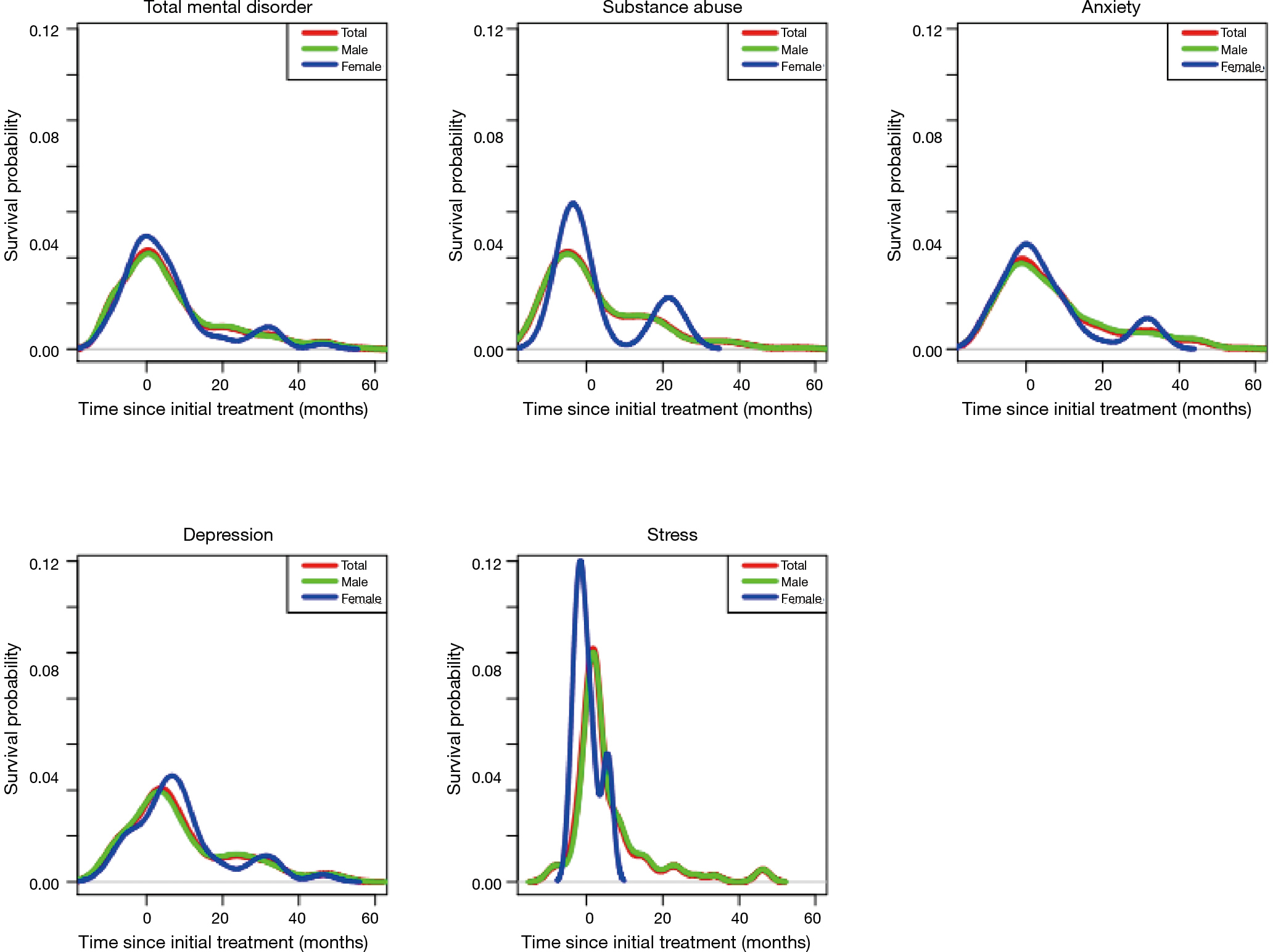 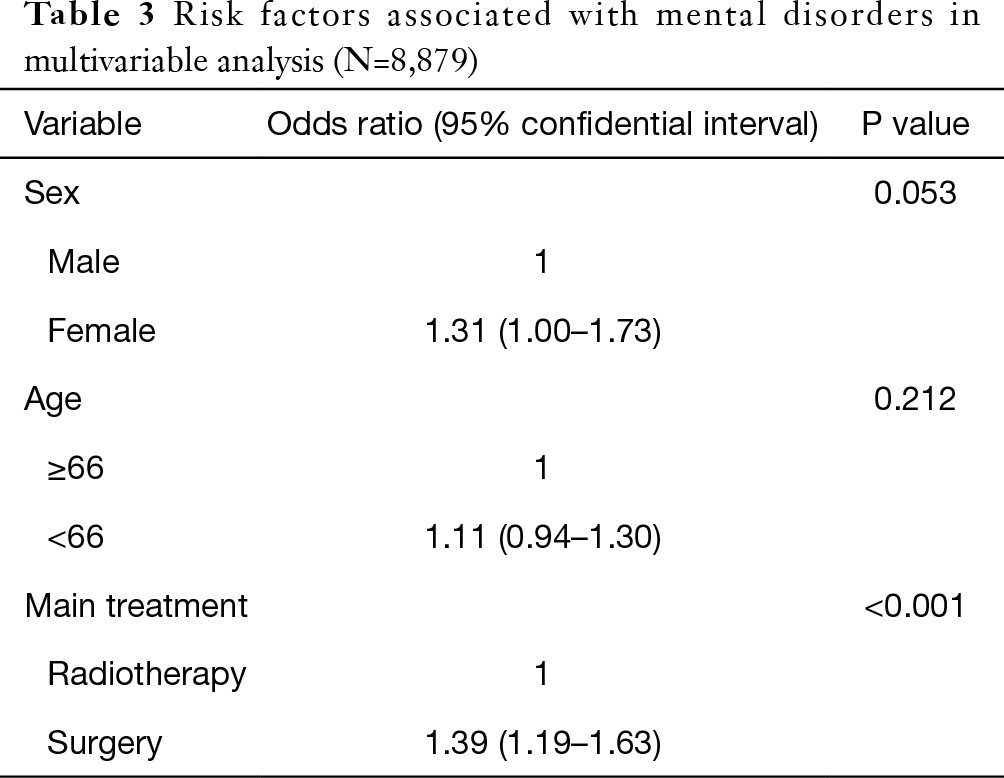 Patients with esophageal cancer can experience significant psychological distress because of fears from upcoming treatment and treatment-related side effects as well as recurrence or progression. Before treatment, distress can be due to undergoing diagnostic workup for a suspicious malignancy and fear of radical treatment (15). Therefore, pretreatment assessment could help screen for patients who are at risk of psychological distress according to clinicodemographic factors such as sex, age, and initial treatment (16). However, despite several guidelines recommending assessment for mental status among cancer patients, most medical institutions may not screen cancer patients during treatment (17).

Each psychological distress showed a different time-dependent pattern of manifestation. Before the treatment, anxiety was the highest and then decreased after treatment. In the pre-treatment phase, patients may develop anxiety while anticipating treatment (21). Meanwhile, depression was highly common after treatment, and this may be due to treatment-related acute toxicity. The presence of depression in the post-treatment period could result in non-compliance with adjuvant treatments (22). Compared with other psychological distress, the frequency of stress/adjustment disorders increased rapidly after treatment. In longitudinal studies of cancer survivors, stress reaction/adjustment disorder showed the highest rate of increase after cancer diagnosis (14,18). Therefore, providing personalized intervention based on the time-dependent patterns of each psychological distress could help improve the quality of life for esophageal cancer survivors.

In this study, women showed higher risk for psychological distress (OR: 1.31), consistent with the findings that female cancer survivors are more at risk for emotional disorders. In a previous study of esophageal cancer patients, women were more likely to report anxiety prior to treatment than men (21). The incidence of psychological distress sharply changed before and after treatment in women. Further, the risk of emotional disorders was significantly higher in the surgery group (HR: 1.33, P<0.001), which is believed to be related to distress before invasive treatment and the side effects caused by treatment. However, the RT group also showed a high prevalence of psychiatric conditions, which could be a barrier to receive appropriate surgical care. The RT group was older patients and had poor general condition compared to the surgery group (Table 1). These findings suggest that patients perceive RT to be relatively less aggressive treatment than surgery (25). Therefore, it is important to evaluate the risk of psychological distress in cancer survivors, with consideration of clinical factors such as sex and treatment.

This study had some limitations. First, psychological distress was identified based on claims data from the HIRA. Clinical data (stage, histologic type), social data (educational level, marital status) were not available. Notably, the prognosis of esophageal cancer differs according to its histologic features (squamous carcinoma vs. adenocarcinoma). Second, the disease codes on claim data using in this study were not generated for the research. The ICD codes for psychological distress may have lesser diagnostic accuracy than those obtained from structured clinical data. However, the prescription for psychotic drugs is highly regulated, and thus mental illnesses are coded cautiously and it could lessen the issue of the accuracy of the diagnosis codes. Because the claim data does not include all the patients with mental illness, the results of this study should be interpreted cautiously. Third, we focused on time sequence and analyzed the pattern of prevalence and risk factor during the first diagnosis of psychological distress. Because a cancer survivor could have several psychiatric comorbidities, future studies should consider changes in the mental health status over time.

Funding: This research was supported by the Bio & Medical Technology Development Program of the National Research Foundation (NRF) funded by the Korean government (MSIT) (No. 2020M3A9E8024907).

Conflicts of Interest: All authors have completed the ICMJE uniform disclosure form (available at http://dx.doi.org/10.21037/jtd.2020.02.55). The authors have no conflicts of interest to declare.

Ethical Statement: The authors are accountable for all aspects of the work in ensuring that questions related to the accuracy or integrity of any part of the work are appropriately investigated and resolved. This study was approved by the institutional review board (IRB) of Ajou University Hospital (IRB No. AJIRB-MED-EXP-16-494). The informed consent was exempted by the board.