Aortic and mitral valve surgery for infective endocarditis with reconstruction of the intervalvular fibrous body: an analysis of clinical outcomes

Infective endocarditis is defined by infection of a heart valve, the endocardial surface or an indwelling cardiac device (1,2). This disease is rare, with an incidence of 3–10 per 100,000 people per year (3). Involvement of the intervalvular fibrous body [aorto-mitral curtain (AMC)] is rarer in patients with endocarditis. Reconstruction of the AMC during double-valve surgery may be the only alternative for treating patients with infective endocarditis with abscess or vegetations, inadequate intervalvular fibrous tissue to secure a prothesis valve. The procedure becomes more complicated. The mortality rate of this operation was reported as 20–30% (4,5). This procedure has been reported in several centers in the US and Europe (6). However, the clinical outcome of China’s reconstruction of AMC remains unknown. We want to share our experience and analyze the clinical outcomes of reconstruction of AMC during aortic and mitral valve surgery in a single center in China.

The operative technique has previously been described in many articles (7,8). The method we use in our department is shown in Figures 1-3. Echocardiogram was used to detect the abscesses or vegetations (see Figure 4). A typical huge vegetation of AMC was provided in Figure 5. All surgeries were performed by the same experienced doctor. After a median sternotomy, the patients were connected to cardiopulmonary bypass (CPB) and the nasopharynx temperature was lowered to 32 °C. The antegrade and continuous retrograde cardioplegia was used during the time-consuming operation (9). The operation consisted of extending the aortotomy into the noncoronary aortic sinus, into the AMC and the dome of the left atrium. The left ventricular inflow and outflow tracts were exposed. The extensiveness of resection and reconstruction depended on the infection. After the resection of all infected and abnormal tissues, circumferential reconstruction of the mitral annulus is required in the event of anterior annular destruction due to an abscess or huge vegetation in the mitral annulus. If the posterior mitral annulus was not infected, the prosthetic mitral valve was secured to the native posterior mitral annulus. If the majority of the mitral valve was free of infection, the mitral repair was the best choice for young adults with an artificial ring. It was simple to perform an annuloplasty procedure to stabilize the annulus as the AMC needed to be debrided and patched. In order to ensure the best effect of mitral valve repair and the match between the prosthetic valve and the heart, atrial septum incision should be performed. The suture of the interatrial septum incision was not time-consuming. Sometimes the aortic root was infected severely, the Bentall procedure was performed. A single-folded triangular bovine pericardial patch was sutured to the lateral and medial fibrous trigones, and to the superior aspect of the prosthetic mitral valve. One layer of the patch is used to close the left atrium and the other layer is used to reconstruct the aortic root. An aortic prosthetic valve or valved conduit was implanted in the aortic position by securing it to the native aortic annulus and the patch. Postoperative antibiotics were used for 6 weeks. Table 2 shows the perioperative data. 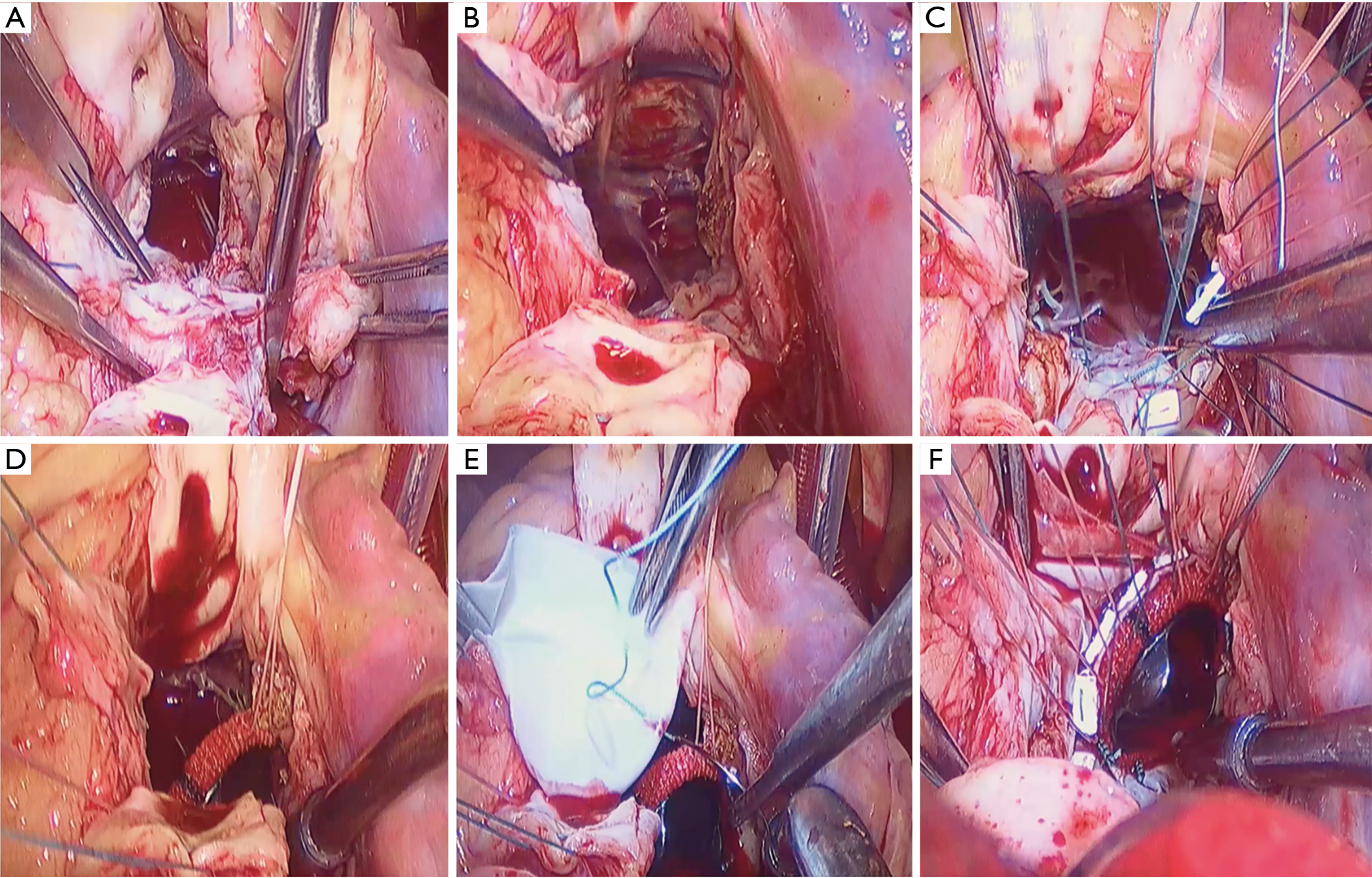 Figure 1 Part A of surgical technique for the Commando procedure. (A) Debridement of the infected valve and aortic root; (B) inspection of the left atrium (LA), the left ventricular outflow tract (LVOT) and the posterior mitral valve (MV); (C) mitral valve replacement; (D,E) to suture the pericardial patch to the artificial MV; (F) reconstruction of the aortic-mitral curtain (AMC) with a pericardial patch. 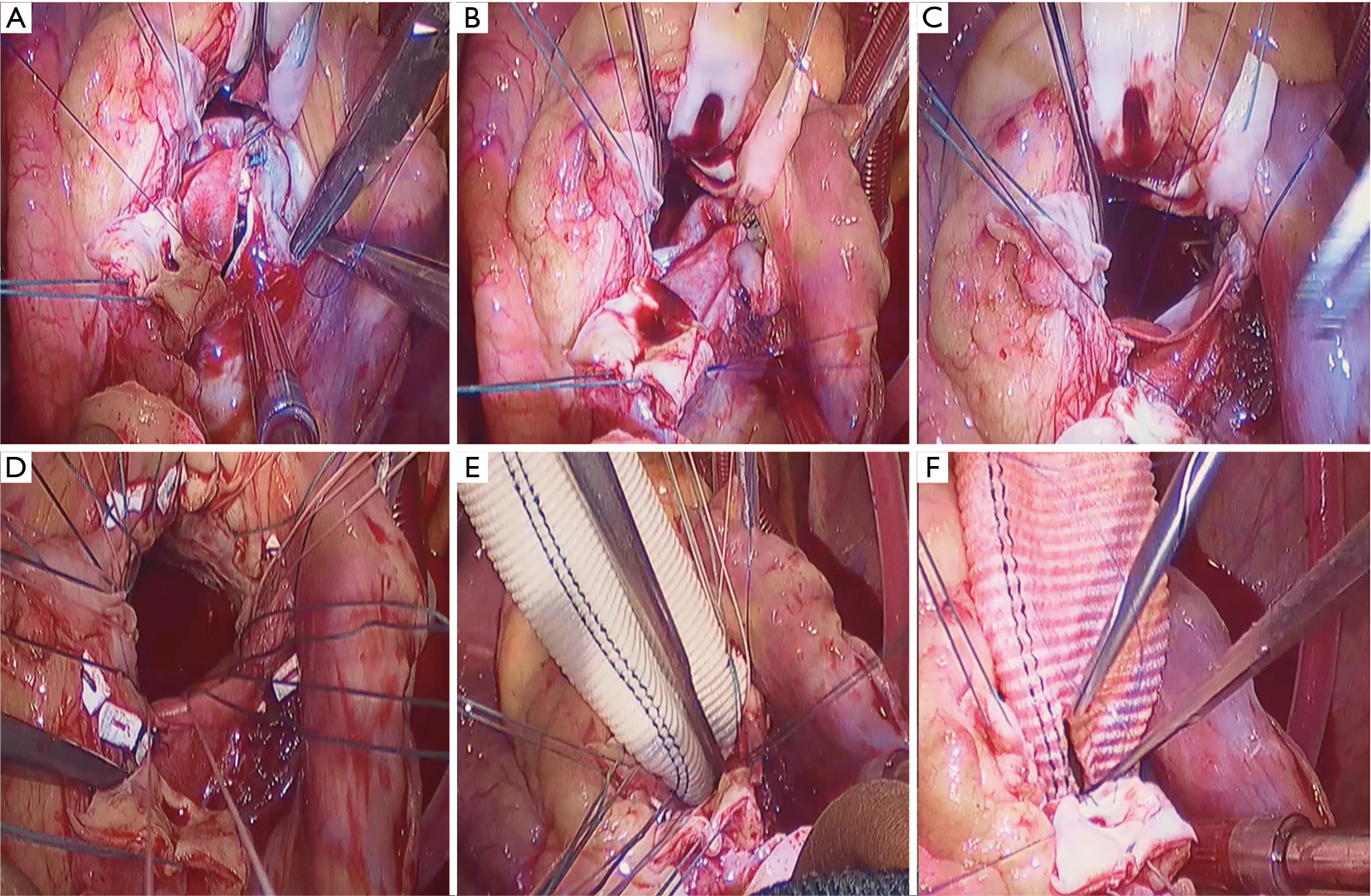 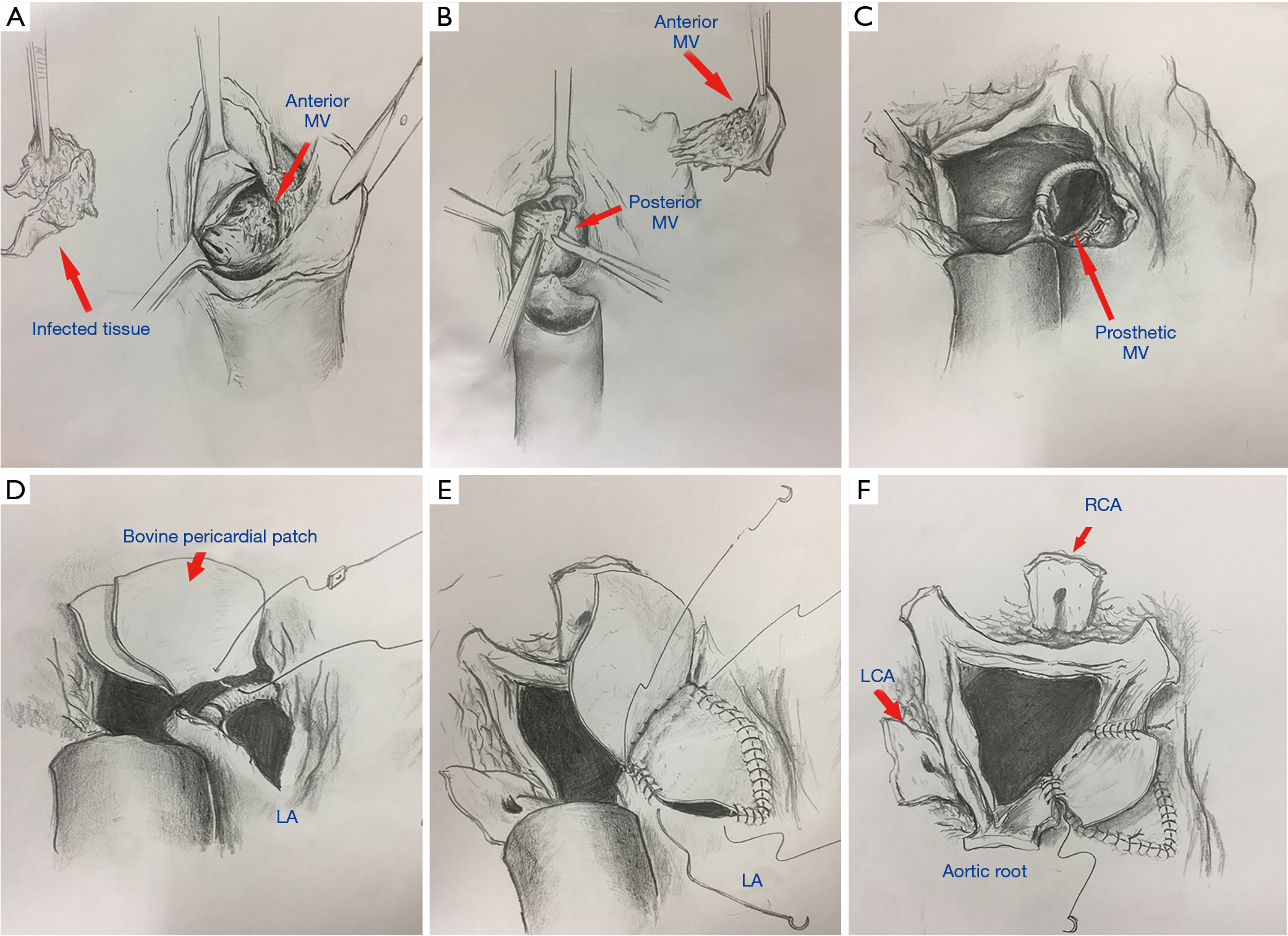 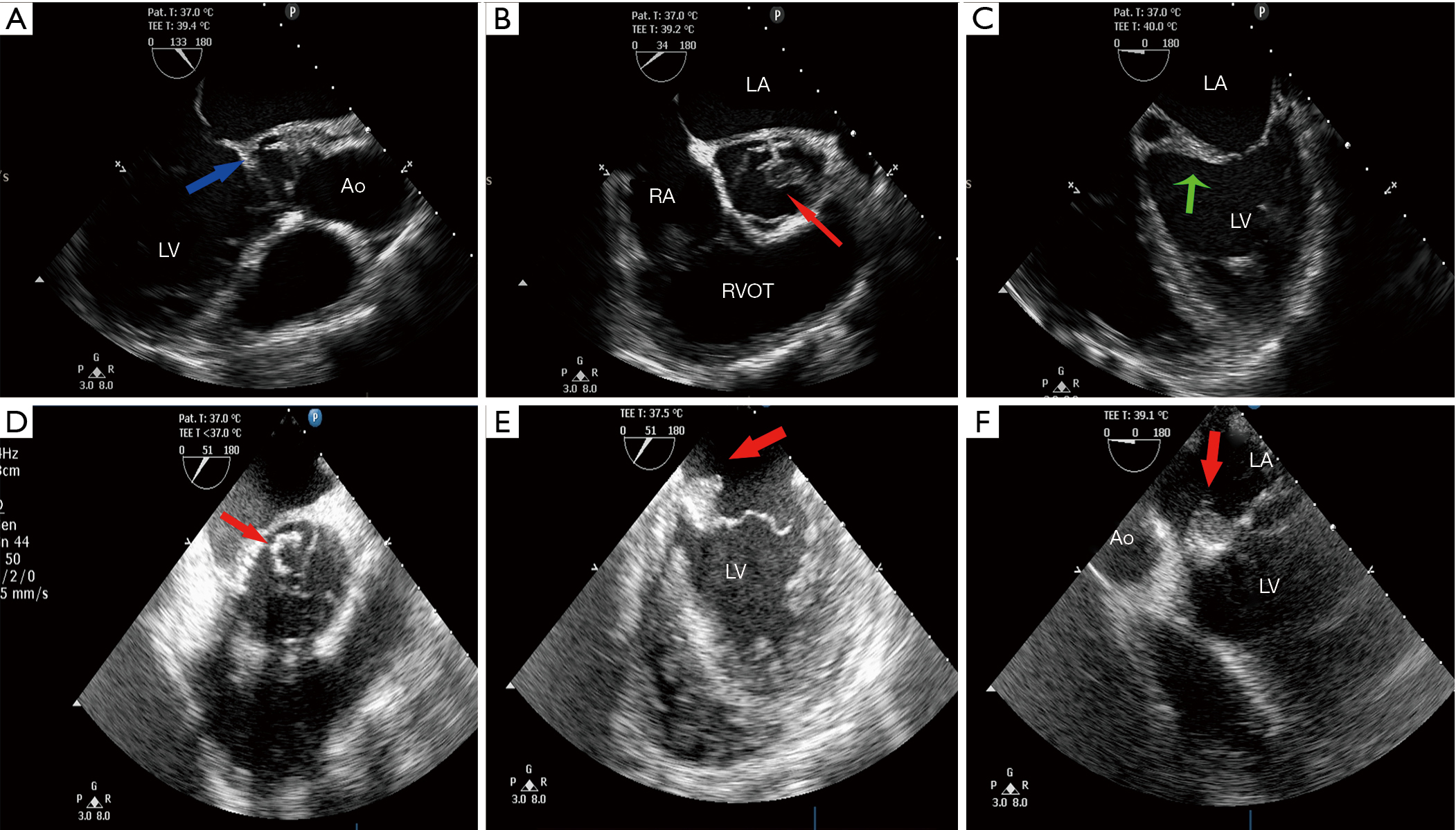 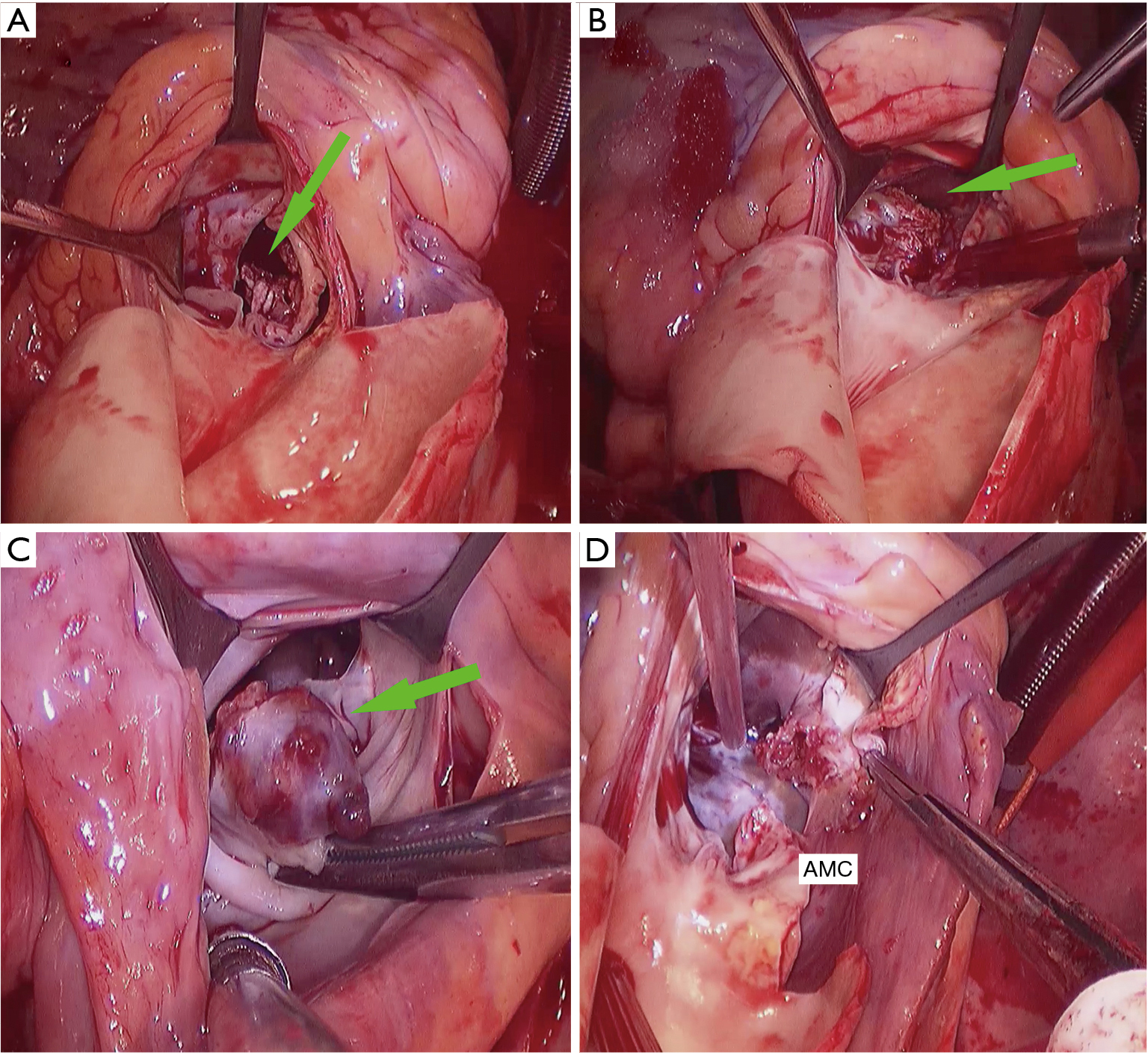 All data analyses were performed using SPSS 19.0 software package (SPSS Inc, Chicago, IL). Categoric variables are expressed as percentages and continuous variables are reported as mean ± standard deviation in text and tables. Late outcomes and survival were analyzed with the Kaplan- Meier method. Operative mortality was defined as death within 90 days of the operation (10).

It is still a clinical and logistical challenge to manage patients with IE. Early decision-making has the potential to improve clinical outcomes. In developing countries, it was sometimes difficult to operate in time due to economic reasons and inadequate medical equipment. Delaying surgery may permit a longer duration of antibiotic therapy or hemodynamic stabilization but increase the risk of disease progression with valve destruction, heart block, abscess or vegetation formation, the destruction of intervalvular fibrous body, and embolic complications. In real-world situations, many patients with a guideline indication for intervention still do not undergo surgery word-widely. Many kinds of techniques were used. Surgery was performed in 50% to 60% of patients and 6-month survival was >80% (11,12). Operations for active IE present high risk with an overall in-hospital mortality of 20%. The optimal timing of surgery is still in debate. Urgent surgery (within a few days) is indicated for patients who have moderate to severe heart failure, uncontrolled infection, high risk of embolic complication and large vegetations associated with severe valvular disease. Surgery should be delayed for 2–4 weeks in patients with large cerebral infarction and at least 4 weeks in those with intracerebral haemorrhage if possible (13). Current series researches have shown that very low mortality could be achieved in centers of excellence with high-level experience of the management of complex patients and concentrated expertise in cardiology, microbiology, and surgery. In our study, we are surprised to see there were no cases of infection due to Staphylococcus from blood culture. The organisms identified in the series were largely dental in origin and tend to present with a subacute clinical course. For example, Abiotrophia defectiva, although difficult to eradicate with antibiotics, tends to present subacutely with large vegetation but does not have a fulminant course of aggressive destruction like Staphylococcus.

There have been several studies that have examined surgical outcomes of reconstruction of AMC (14,15). However, there have, to date, been no reports on the short-term and mid-term outcomes of patients in whom the aortic valve, mitral valve, and AMC underwent surgical intervention in China.

Reconstruction of the AMC is a very rare and challenging surgery. The development of a paravalvular abscess or destruction due to infective endocarditis is the main indication for this technique. Bruce Lytle, who pioneered the technique at the Cleveland Clinic, named it “Commando” for its complication, adopted from head and neck surgery for tongue cancer (16). Tirone David also described a similar technique for AMC reconstruction with double-valve replacement around the same time (17). Davierwala et al. (4) reported their clinical outcome of 25 patients underwent double valve replacement and reconstruction of the AMC. The 30-days mortality was 32%, the 2- and 5-year survival were only 37% and 24.6%, respectively. Kim et al. (18) reported results in 22 patients after similar procedures with 2 early (6.7%) and 5 late (16.7%) deaths. In the Commando operation, adequate exposure is necessary for effective debridement and reconstruction. In order to avoid the mismatch between the prosthetic mitral valve and the base of the heart, we strongly recommend performing mitral valve surgery through an incision of the atrial septum rather than the vertical aortotomy. We placed interrupted, pledged mattress sutures around the posterior mitral annulus for the mitral valve replacement, or the interrupted sutures for the mitral valve repair. The prosthetic mitral valve was implanted in the posterior annulus, after which the interregional aortic-mitral junction was reconstructed. This maneuver facilitates orientation and allows for proper fit of the prosthesis. Also, a single-folded pericardial patch rather than a double patch simplified closure of the dome of left atrium and improved hemostasis (19). According to our experience, debridement of infected tissues should be careful, radical, and large enough, just like treating malignant tumors- the best or nothing. It is more important than the type of patch material or valve used in the operation. There was no recurrent infection in our study.

It must be highlighted that the Commando procedure generally refers only to mitro-aortic valve replacement with AMC reconstruction and that in the present study 42.9% (6 patients) of the patients underwent AVR and mitral valve repair. It is called hemi-Commando procedure. The rectangular resection of the anterior mitral valve leaflet was used commonly. A native pericardial patch was used in 1 patient for reconstruction of the resected tissue in the anterior mitral valve leaflet. Actually, the majority of the mitral valve was free of infection, so we could perform repair procedures easily. The water test showed the excellent coaptation of the mitral valve. Patients in the hemi-Commando group had better long-term survival in other researches (14).

As expected, the Commando procedure was significantly associated with early morbidity and mortality. The major complications were reported as bleeding, sepsis, renal failure, neurological events, and heart conduction block. In our study, only 1 patient received a pacemaker implantation. There was no stroke development or renal failure. With high in-hospital mortality (ranged from 9% to 32.2%) (18,19), the operation should be performed by surgeons with experience in treating invasive IE diseases at tertiary cardiac centers. We speculate that this is why we can get satisfactory results. There was no late death until now in our cohort. The late survival was 100%. The aortic allograft was considered to have a theoretical advantage of infection resistance. However, the valved conduit was preferred in our department. The durability is important for young patients.

Other indications for the Commando procedure are calcified of the aortic annulus extending into the AMC in double valve replacement, enlargement of the small aortic annulus, or lack of enough fibrous tissue to secure prosthetic valves. The results were better in these patients compared to IE patients (20).

Several limitations of our study have to be defined. This is a single-center retrospective study of patients with endocarditis undergoing surgical treatment. The patients received operation were heterogeneous. Two Behcet’s diseased patients and 6 bicuspid valved patients were enrolled. The results may be biased by disparities in medical and surgical management. The sample size was small. The number of patients was not much. The longest follow-up time is 40 months, we still need to continue to find the long-term result.

The double-valve replacement and AMC reconstruction (the Commando procedure) is an effective technique in complex heart valve disease. The short-term and mid-term results with this technique are optimal, with a very low in-hospital mortality and 100% of survival during follow-up. Good freedom from reoperation and recurrent infective endocarditis are seen. In order to get long-term outcomes, continuous surveillance of these patients is required because of late patch or valve dehiscence.

Conflicts of Interest: All authors have completed the ICMJE uniform disclosure form (available at http://dx.doi.org/10.21037/jtd.2020.03.04). The authors have no conflicts of interest to declare.

Ethical Statement: The authors are accountable for all aspects of the work in ensuring that questions related to the accuracy or integrity of any part of the work are appropriately investigated and resolved. The informed consent of the patients was obtained and the study was approved by our Institutional Ethics Committee.