Recent advances in imaging modalities have made it easier to diagnose lung cancer, and there has been an increase in the number of early lung cancer cases diagnosed using the recommended computed tomography (CT) program (1,2). In particular, many guidelines have suggested different methods to diagnose and treat small ground-glass nodules (GGNs) (3,4). Accurate histologic diagnosis of these lung lesions might enable appropriate surgical treatment.

Percutaneous core needle biopsy (PCNB) and conventional transbronchial biopsy are standard diagnostic procedures with high diagnostic yield for lung nodules. However, in the case of a small lung lesion, the diagnostic yield of PCNB is poor, and there is a relatively high rate of complications such as pneumothorax or hemothorax; moreover, radiation exposure is inevitable (5-7).

The accuracy rate of PCNB diagnosis is less than 67% in <1-cm-sized lung nodules despite being solid nodules (8). Moreover, the role of PCNB is controversial in the diagnosis of GGN lesions, with no consensus on the optimal size threshold (8).

In the case of small non-palpable GGNs, if sublobar resection is possible through accurate localization, the optimum advantage of the resection method, particularly the removal of the lesion with preservation of pulmonary function, can be guaranteed (2,9). Usually, GGNs are difficult to palpate using the fingers or an instrument, and are not visible with optical vision during video-assisted thoracoscopic surgery (VATS). Hence, it is very difficult to find the target lesion without localization during surgical resection. For this reason, various localization procedures have been proposed in the surgical resection of small lung nodules (10-13) including electromagnetic navigation bronchoscopy (ENB). Several studies have reported the efficacy of ENB procedures and, in most cases, have shown their higher accuracy and a lower incidence of complications than the conventional methods (14-20) of lung nodule resection. However, there is a lack of studies on ENB-guided surgical procedures for GGNs. Therefore, we evaluated the accuracy of ENB procedures targeting small GGNs and the effectiveness of surgical resection.

A multidisciplinary team, including a pulmonologist, radiologist, interventional radiologist, and surgeon, evaluated all the lesions before the ENB procedure. In total, 110 target lesions were surgically resected after tattooing or transbronchial biopsy. There were 35 cases of GGN lesions in 31 patients, and solid lesions and cavitary lesions were excluded from the analysis. A total of 33 lesions in 29 patients were included in this study, after excluding 2 transbronchial biopsy-only cases (Figure 1). The Institutional Review Board of the Chungnam National University Hospital approved this retrospective study. 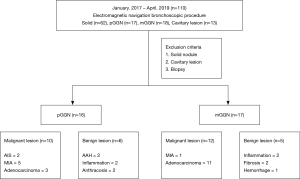 To reconstruct the virtual route for navigation to the target lesion, the patients underwent chest CT with 1-mm cuts according to the manufacturer’s recommendations (Medtronic, Minneapolis, MN, USA) prior to surgery. Using the software provided by the manufacturer, we reconstructed the virtual 3D route to the target lesion by automatic and manual methods. We typically reconstructed several other routes (2 or 3 routes) in cases wherein the locatable guide was not able to follow the route.

After the ENB procedure, the endotracheal tube was replaced with a double-lumen tube for surgery. Resection was performed using single-port VATS or the conventional three-port VATS. Single-port VATS was performed in specific cases of relatively peripherally located and small-sized nodules, and the tower crane technique was used (21). The target lesion was resected using a linear stapler guided by the marking imprinted by the indigo carmine dye. Surgical resection margins were judged grossly, and if the judgment was not clear, the surgical decision was determined through frozen section biopsy results. If there were invasive components in frozen section biopsy and further resection was required, anatomical resection such as segmentectomy or lobectomy with mediastinal lymph node dissection was performed. 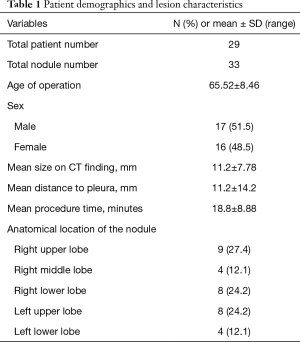 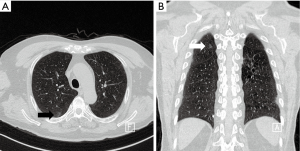 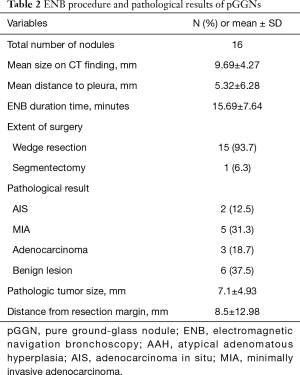 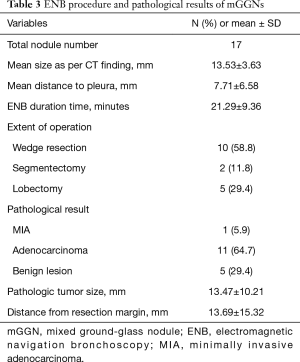 All nodules were successfully resected by single-port VATS or the conventional three-port VATS without conversion to thoracotomy. We generally employed the conventional three-port VATS method, but if the target was located peripherally with no adhesion, or the location of the marked area could easily be visually confirmed at the operation field, we performed the resection by anchoring the suture through a single 15-mm port (tower crane technique) (21). VATS wedge resection was performed in most cases. However, if the location of the lesion made it difficult to secure a sufficient surgical resection margin with wedge resection, or if the lesion was located at the central portion, we performed segmentectomy with additional tattooing of the intersegmental plane by ENB.

In pGGNs, wedge resection was performed in 15 patients, and segmentectomy was performed in 1 patient. Three pGGNs were confirmed as invasive adenocarcinoma on the permanent pathological result, and the surgery was completed by lobectomy afterward.

In mGGO lesions, wedge resection was performed in 15 patients, and segmentectomy was performed in 2 patients. Conversion to lobectomy was required in 5 patients. In 6 patients with mGGNs with confirmed invasive adenocarcinoma by permanent pathology, we performed completion lobectomy. The overall postoperative course was uneventful. In two patients with noninvasive adenocarcinoma, resection was required to achieve sufficient safety margin.

In this study, ENB-guided target tattooing with indigo carmine injection for surgical resection of GGNs was successful in all cases. In all cases, proper tattooing was made possible by accessing the route set previously. Although the procedure time was relatively short, there was a tendency for the duration to be prolonged when the approach angle to the target was an acute angle, for example, when the lesion was situated in the anterior segment of both upper lobes.

We were able to obtain the accurate surgical specimens that were targeted preoperatively in all cases with sufficient pathological results. The final surgical pathology of the lung nodules revealed 22 malignancies in 33 lesions (66.7%). Of these, 19 and 3 were primary lung adenocarcinomas and metastatic lesions, respectively. Eleven nodules were diagnosed as benign, including atypical adenomatous hyperplasia, inflammation, and anthracofibrosis.

In the 17 mGGO lesions, 12 cases showed adenocarcinoma. Of these 12 cases, one case was an MIA and 11 cases were adenocarcinomas. Five benign lesions were identified as inflammation in 2 cases and fibrosis in 3 cases. The pathologic tumor size was 13.47±10.21 mm, and the distance from the resection margin was 13.69±15.32 mm.

In all cases, there were no procedure-related complications or operative mortality.

With the increase in routine health checkups with low-dose chest CT, we now have better chances in diagnosing GGNs. After acquiring pathological data, the highly suspected GGN lesions must be evaluated for not only differential diagnosis of lung cancer but also for definite treatment of early lung cancer (22). For the diagnosis of GGN lesions, PCNB is insufficient due to its high false-negative value (8). Thus, we need to consider surgical intervention in selective cases of GGNs.

ENB allows access to lesions that were not reachable with conventional bronchoscopy and lesions that were difficult to access by other percutaneous transthoracic approach methods with lower complications and higher accuracy rates and without radiation exposure. The localization of the target lesion in the operation field is one of the most important and difficult issues encountered particularly in small lung nodules.

There is no definite guideline for the localization of lung nodules during surgical resection. In the case of solid lesions, it is possible to perform resection without any localization procedures because they can be digitally palpated during operation even if their size is not large in the peripheral region. However, in the case of GGNs especially pGGNs, they cannot be palpated even if they are not relatively large.

Even for solid masses, Ciriaco et al. recommended the preoperative localization procedure for lung nodules <10 mm and those located >15 mm from the pleura (23). Nakashima et al. suggested that preoperative localization for lung lesion resection was required for cases that met two or more of the following criteria: (I) maximum diameter of the nodule of 5 mm or less; (II) maximum diameter to minimum distance between the visceral pleura and inferior border of the nodule of 5 mm or less, and (III) nodule with low densities (24).

Several conventional methods have been used to localize lung lesions prior to ENB. Localization of the wire guided by CT prior to surgery had a relatively high rate of wire dislodgment as well as complications such as pneumothorax and hemothorax, and radiation exposure is inevitable. In addition, other methods, such as fiducial placement, which was performed for localization through fluoroscopy in the operation field, have disadvantages in that they are associated with radiation exposure and difficult to perform because many centers do not have the capacity to adequately support these procedures in their facility.

Thus, recently, the transbronchial approach through ENB was widely performed for the localization of target lung lesions due to its many advantages compared to the conventional methods.

Previous studies have also documented the safety and efficacy of localization in the diagnosis and surgical resection of small peripheral pulmonary lesions by ENB, and the success rate was very high as well. Awais et al. reported a 100% success rate for ENB-guided dye marking for thoracoscopic resection of small pulmonary nodules (25). Marino et al. reported a 97.2% accuracy and two nodules that were localized by marking were identified by palpation (26). However, there is no study on ENB-guided localization for lung resection in GGNs. Therefore, in this study, we performed ENB-guided localization of relatively small GGNs (11.2±7.78 mm) withs high efficiency and accuracy.

One of the limitations of this study is that the selection bias could not be eliminated because of its retrospective study design and the single surgical team who performed the procedure. Moreover, we assessed a relatively few patients, and no comparison with the appropriate control group was made.

In conclusion, ENB is a feasible and highly accurate localization method for minimally invasive lung resection of small GGNs. Further studies on small GGO lesions should be performed in the future.

Funding: This work was supported by research fund of Chungnam National University.

Conflicts of Interest: All authors have completed the ICMJE uniform disclosure form (available at http://dx.doi.org/10.21037/jtd.2020.03.71). The authors have no conflicts of interests to declare.