In this study, we aimed to develop and validate a nomogram for young patients with NSCLC based on the cases diagnosed between 2010 and 2016 from the Surveillance, Epidemiology, and End Results (SEER) database. Subsequently, we compared nomograms with those based on the traditional TNM system.

SEER is a public database collecting data from 18 population-based cancer registries and accounts for approximately 30% of the United States population. Patients aged 18–50 diagnosed from 2010 to 2016 were extracted (released in April 2019, based on the November 2018 submission). T and N stage were suggested by the American Joint Committee on Cancer (AJCC) 7th edition of the TNM staging system. The inclusion and exclusion criteria are listed as follows:

The eligible patients were randomly divided into the training cohort and validation cohort at a ratio of 2:1.

OS was defined as the time from the date of diagnosis to the date of death or date of last follow-up. After the Kaplan-Meier estimate and log-rank test in the training cohort, univariate prognostic factors with P<0.1 were identified and further included in the multivariable analysis (Cox proportional hazards models). A nomogram was constructed by integrated independent prognostic factors with P<0.05.

CSS was calculated from the data of diagnosis to the data of death due to NSCLC or date of the last follow-up. Deaths attributable to causes other than this cancer were considered competing risk. Cumulative incidence function (CIF) was used to assess the probability of death. Gray’s test was used to estimate the difference of CIF among groups. The competing risk model was performed through a subdistribution analysis of competing risks. The independent prognostic factors determined with P<0.05 identified by the multivariate analysis were used to develop a nomogram for CSS.

Internal (1,000 bootstrap resamples in the training cohort) and external (in the validation cohort) validation were utilized to assess the predictive capability of nomograms. Harrell’s concordance index (C-index) with a 95% confidence interval (CI) was calculated to assess the discriminative ability of the model. The calibration curve was plotted with predicted and observed survival to evaluate the calibration of the model.

In the training and validation cohort, the capability of nomograms based on the TNM stage and those developed in our study were compared based on the C-index.

In addition to comparing the discriminative ability by C-index, we sought to illustrate the independent discrimination ability of the nomogram of OS for identifying patients with different risk of death. Patients in the validation cohort were stratified into high-, intermediate- and low-risk groups using the cut-off value which was determined by evenly dividing patients in the training cohort into different risk groups according to the total risk scores of the nomogram for predicting OS. The respective Kaplan-Meier survival curves were delineated. 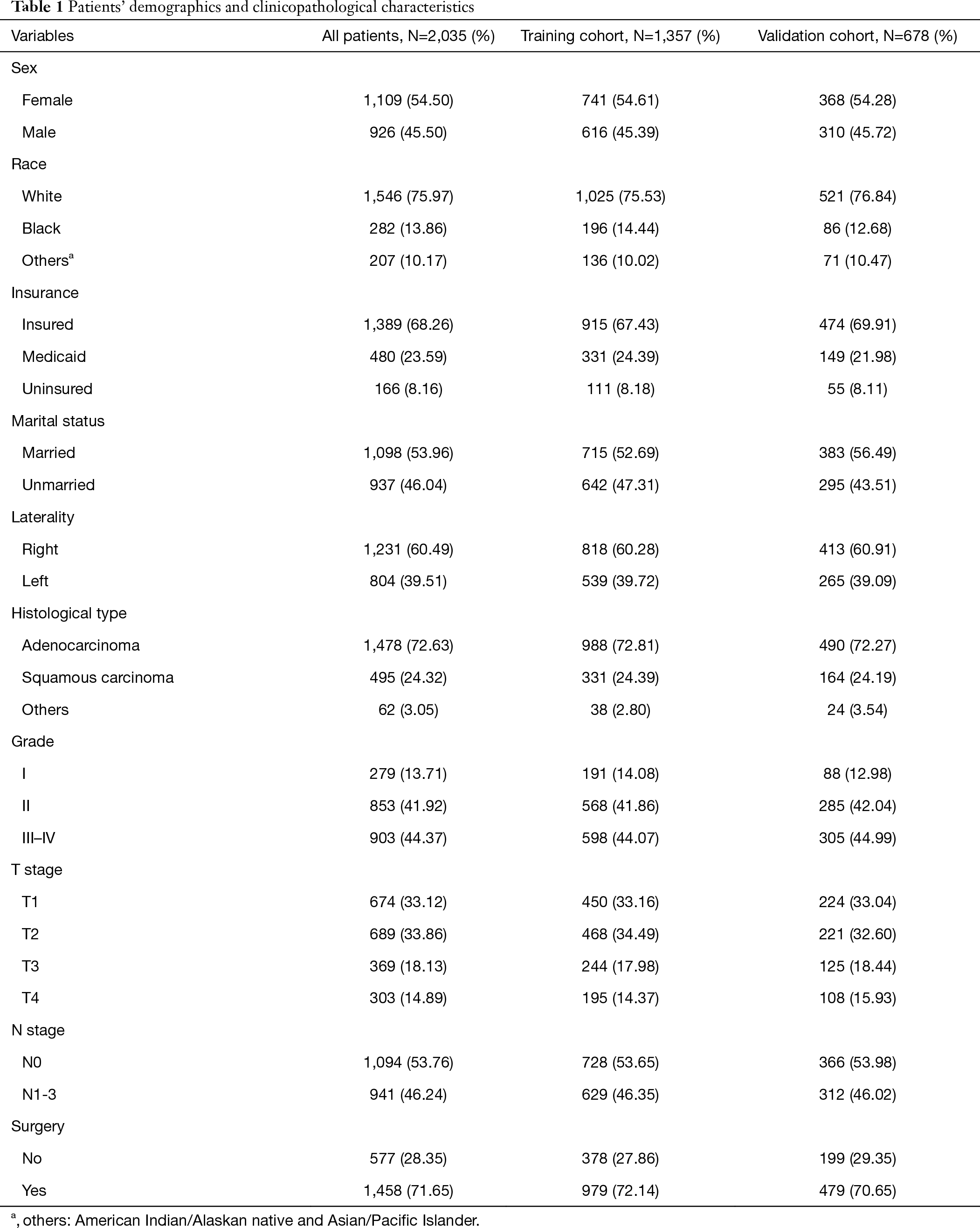 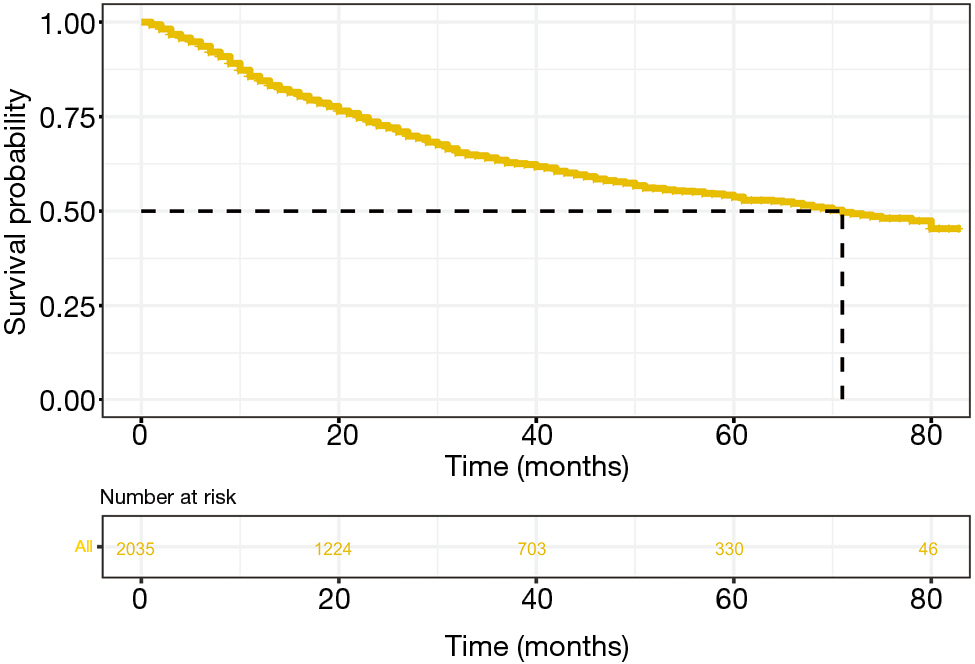 Figure 1 Kaplan-Meier curves for overall survival of all enrolled patients.

The 1-, 2- and 5-year OS of young patients with NSCLC were 84.5%, 72.7% and 52.7%, respectively. After univariate analysis (log-rank test) of OS, all factors excepted race and had strong correlations with OS and subsequently subjected to the multivariate analysis (Cox proportional-hazards regression model). Insurance, marital status, histological type, T stage, N stage and surgery were confirmed to be independent prognostic factors associated with OS (P<0.05) (Table 2). 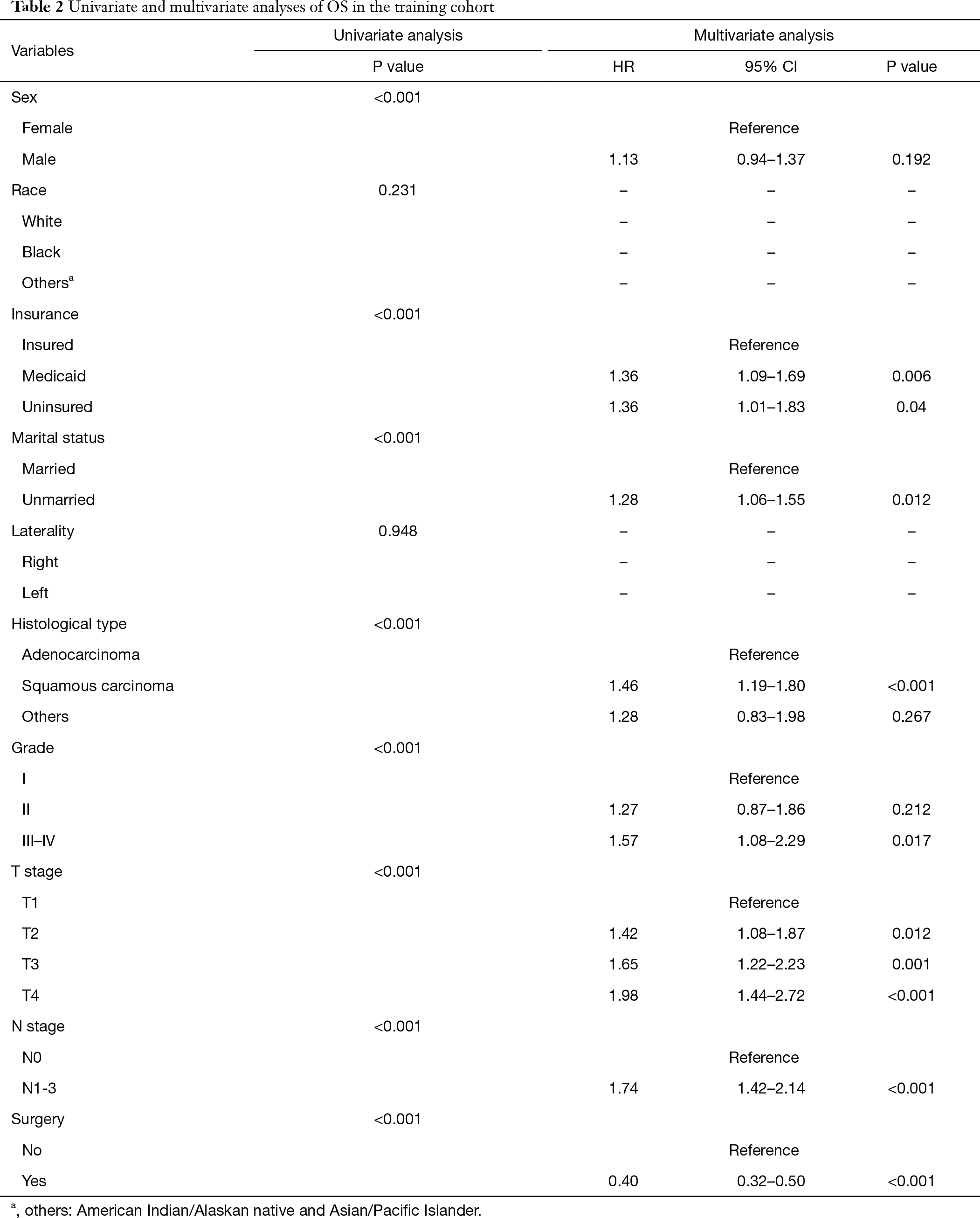 Detailed estimates of the cumulative incidence of death resulting from NSCLC and other causes according to clinical characteristics were listed in Table 3. Specifically, the 1-, 2- and 5-year cumulative incidences of death from NSCLC were 13.4%, 24.9% and 40.9%, respectively, while probabilities of death from other causes were 1.3%, 2.2% and 5.2%, respectively. After univariate (Gray’s test) and multivariate analysis (subdistribution analysis of competing risks), patients with uninsured status, unmarried status, non-ADC, grade II-IV, T2-4 or N1-3 exhibited a higher cumulative incidence of death of NSCLC. 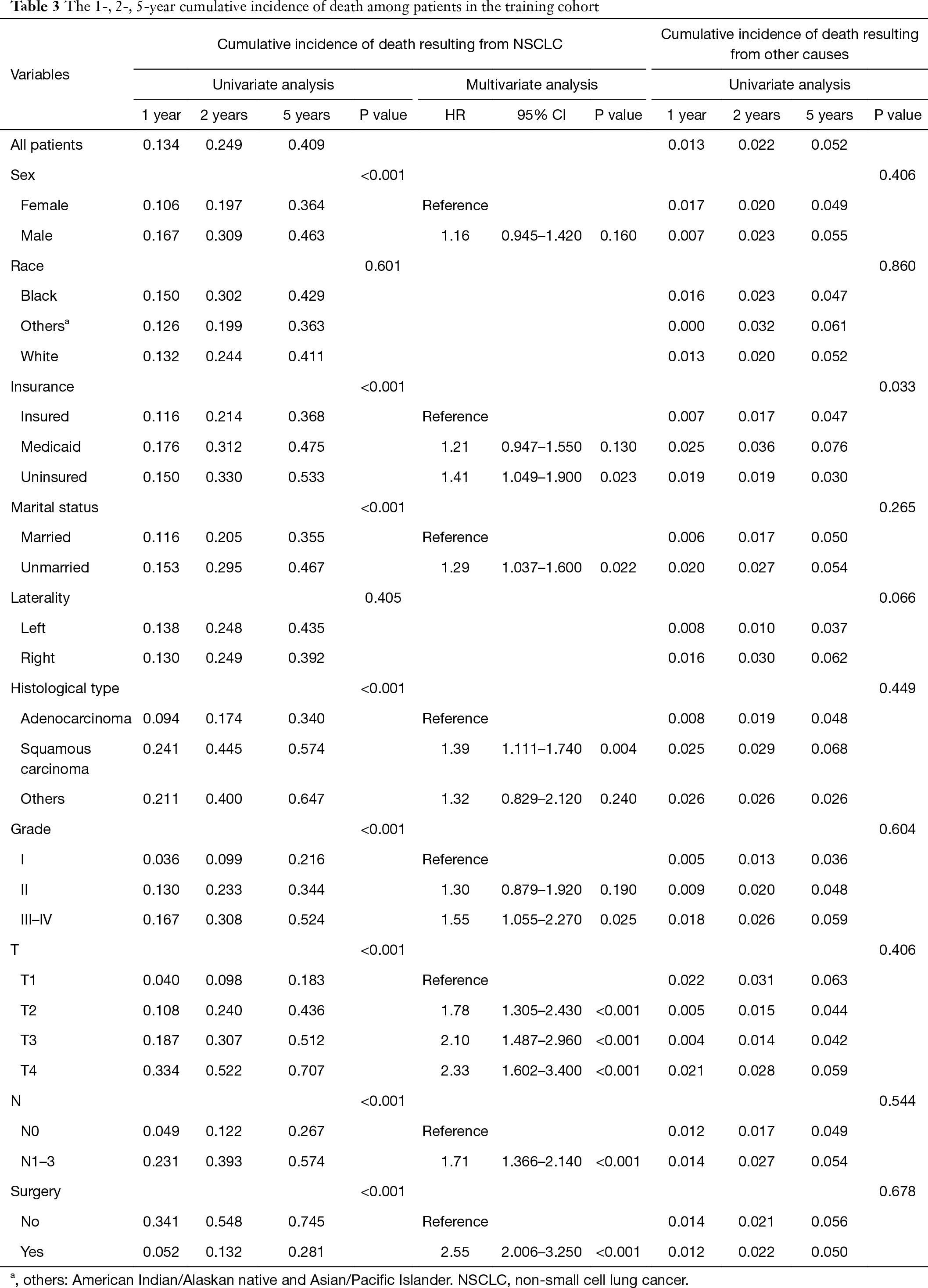 Table 3 The 1-, 2-, 5-year cumulative incidence of death among patients in the training cohort
Full table 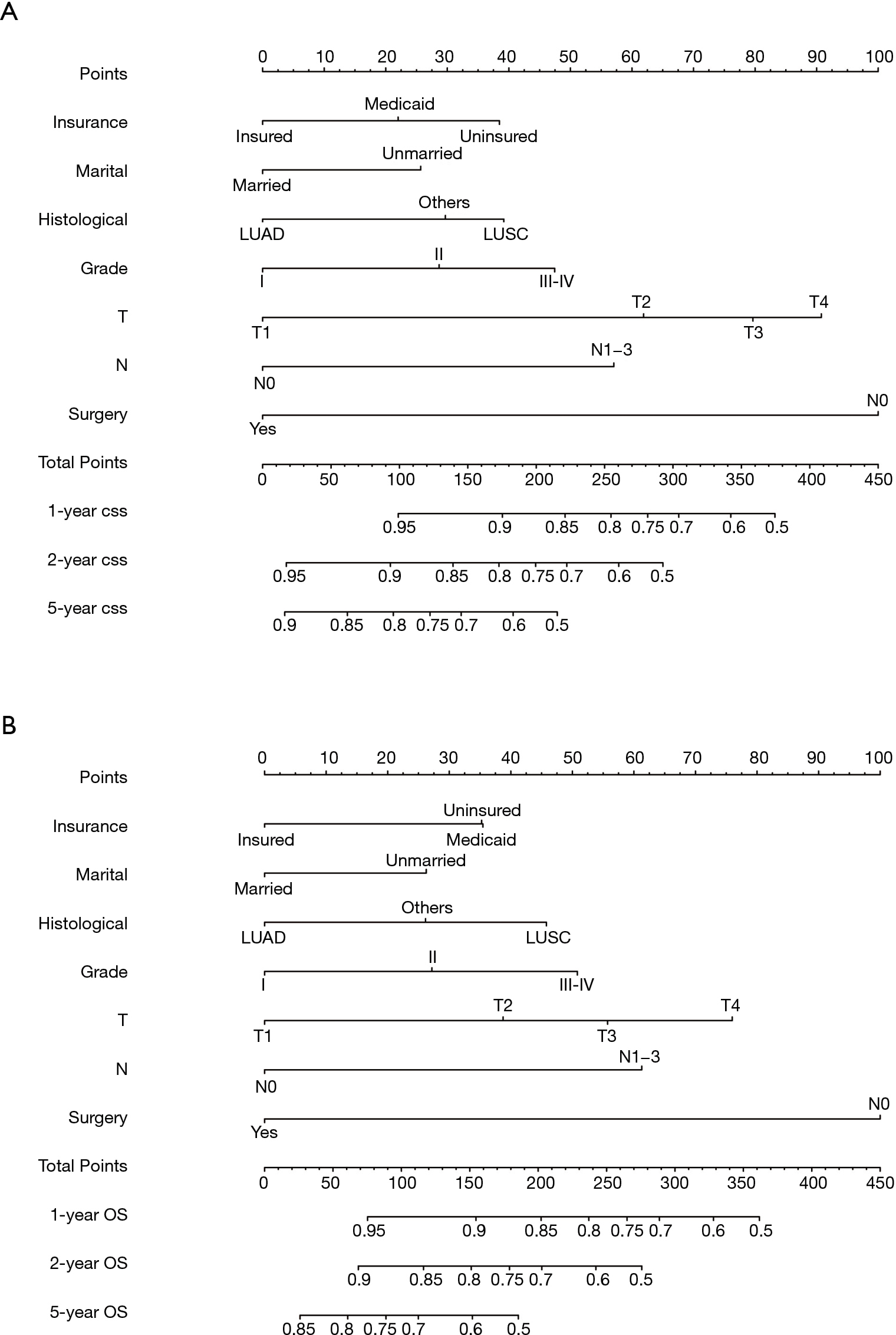 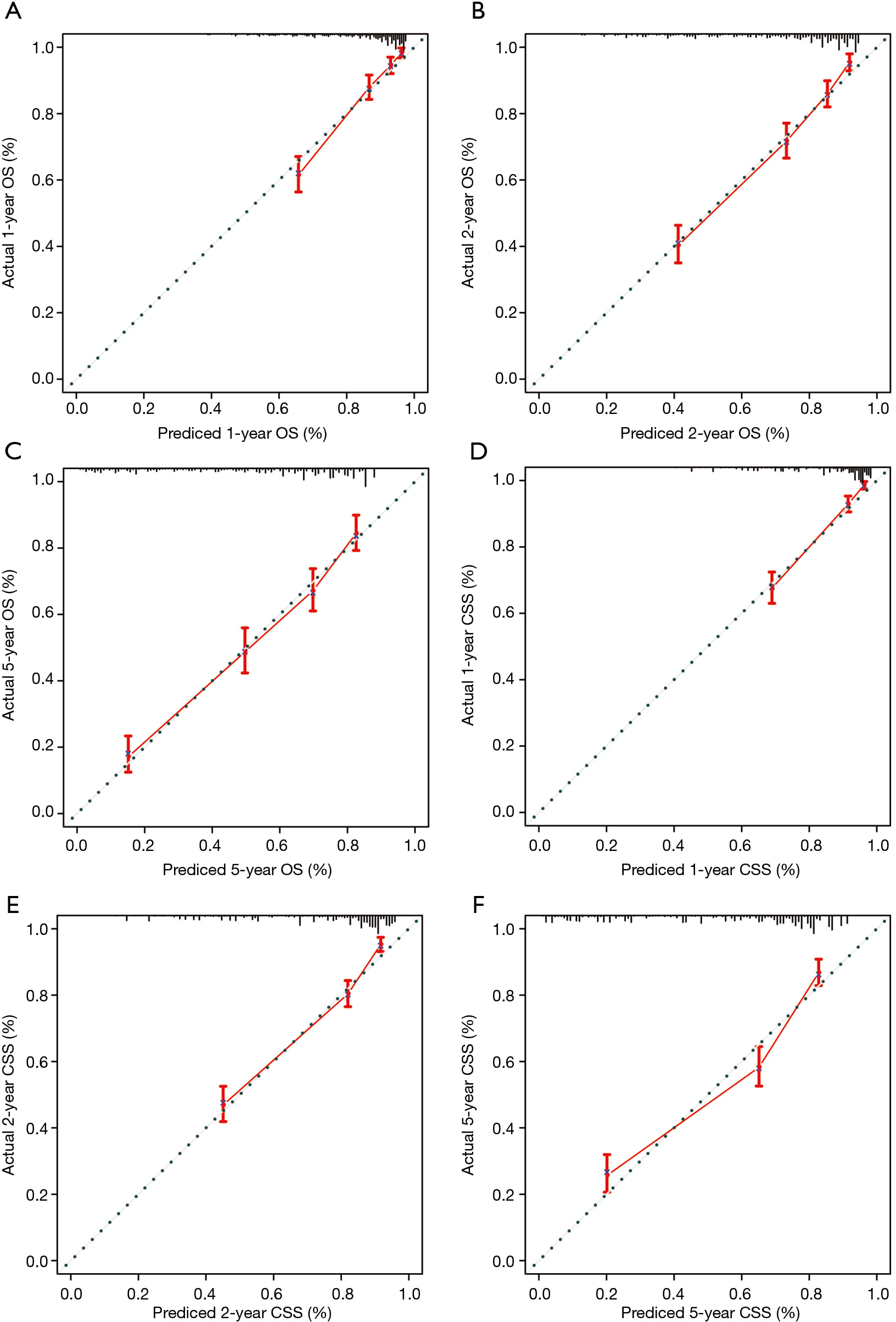 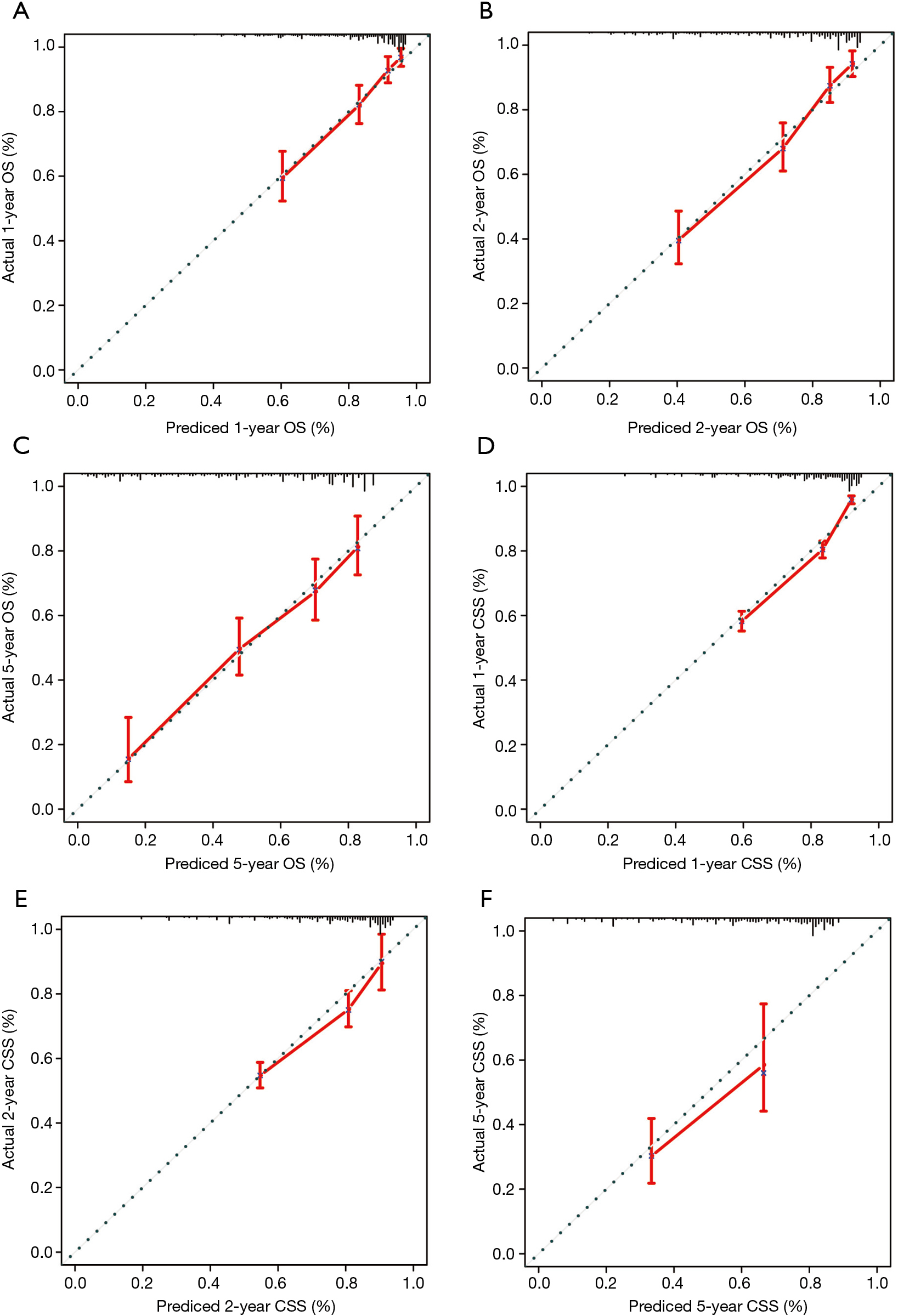 Performance of the nomograms

The total risk score for each patient was calculated based on nomogram of OS, cut-off values for risk group stratification were determined by evenly dividing patients in the training cohort into three different risk groups. Significant differences of survival were observed in patients within different risk groups even in each TNM stage in the validation cohort (Figure 5). 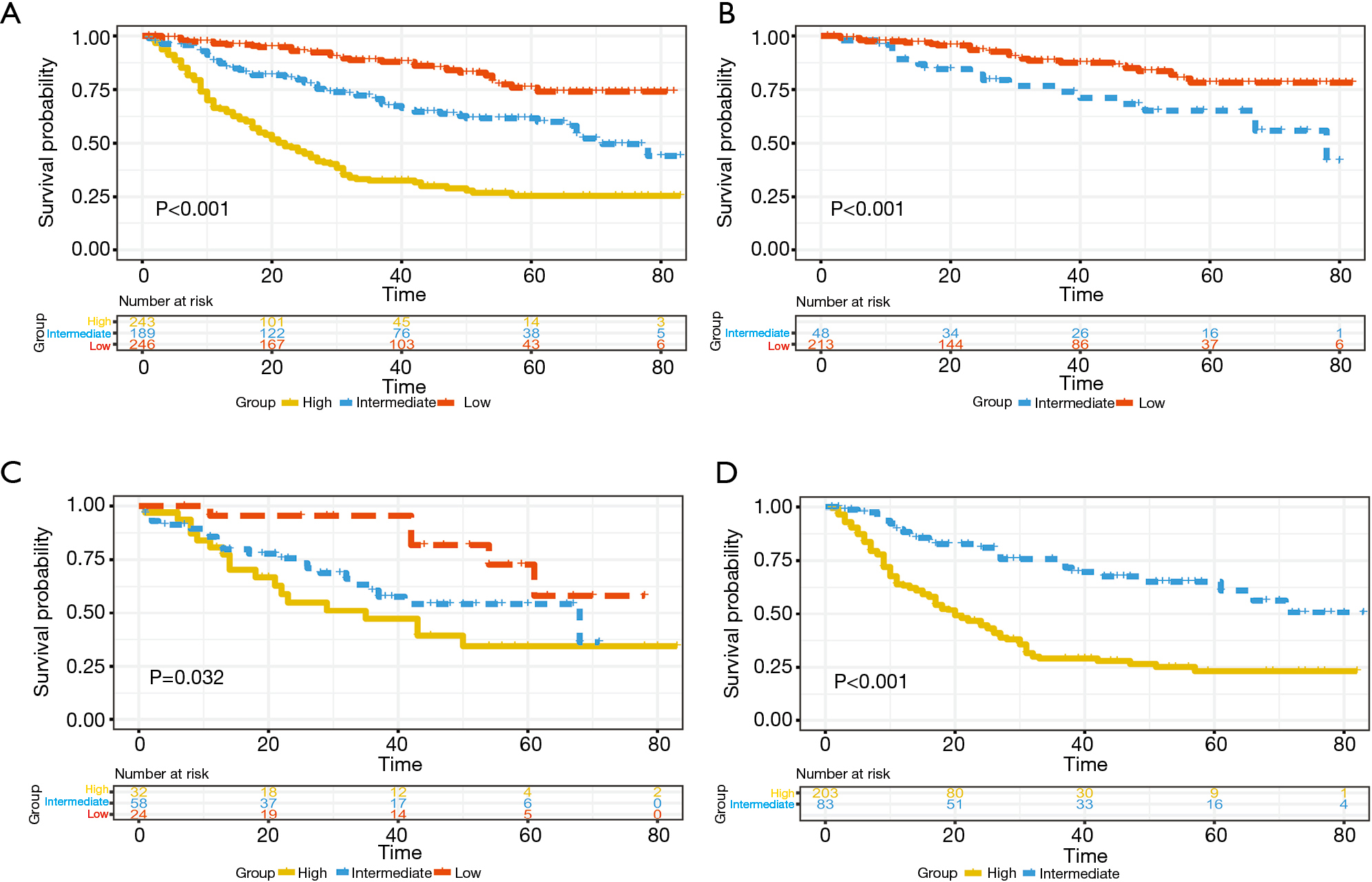 Figure 5 Kaplan-Meier curves for OS of patients (A, all patients; B-D, stage I–III) stratified by risk score within each TNM stage in the validation cohort. Subgroups less than 10 patients were not shown in graphs.

Our study enrolled 2,035 eligible patients between 2010 and 2016 from the SEER database which is a population-based database. Patients who were diagnosed between 2010 and 2016 were included because the long-time span may have a direct impact on the results of the study. On the one hand, the incidence of the smoking population has fallen significantly and the structure of sexual distinction has changed (11). On the other hand, therapeutic strategies have been also improved over time, especially the application of targeted therapy (12).

The log-rank test and Cox proportional hazards regression were used to identify the independent prognostic factors for OS in our study. But traditional Cox proportional hazard model is not adequate for the analysis of CSS, because the cause-specific Cox model treats the competing risks of the event of interest as censored observations and does not directly translate to the survival probability (cumulative incidence) (13). Therefore the subdistribution hazard regression model was applied to the analysis of CSS. Insurance status, marital status, histological type, grade, T stage, N stage and surgery were closely associated with the OS and CSS of the young patients with NSCLC, except for sex, race and laterality. Consistent with previous studies, non-ADC histology, advanced stage and non-surgery were independent negative prognostic factors. All independent prognosis factors were integrated to construct nomograms. The nomograms showed great discrimination and reliability. Specifically, the C-index of our nomograms for OS and CSS were significantly higher than those based on the TNM staging system internally and externally. Calibration plots showed optimal agreement between predicted and actual probabilities of 1-, 2- and 5-year OS and CSS.

There are some limitations to our study. First, the follow-up period was relatively short, as the data for re-staging based on the 7th TNM staging system was incomplete until 2010. Second, some important information was not captured in the SEER database including smoking status, histological subtype, etc. These factors might affect the effectiveness of the nomograms. Although information on radiation therapy and chemotherapy can be accessed from the SEER database, chemotherapy and radiotherapy were not selected as candidate factors due to the “no treatment” and “unknown if patients received treatment” were mixed up. Third, Patients were staged according to the 7th edition of the TNM classification, because the information for re-staging based on 7th TNM staging system in SEER were insufficient. Finally, although the eligible patients were randomly divided into the training and validation cohorts to evaluate the nomograms internally and externally, another independent population-based database or prospectively cohort is needed to validate our nomograms before clinical application.

Seven independent prognostic factors (including insurance, marital status, histological type, grade, T stage, N stage and surgery) for OS and CSS in young patients with NSCLC were identified and further utilized to develop nomograms based the large population database. The nomograms performed excellently internally and externally, which may help clinicians predict the prognosis of patients and make a decision for treatment.

Conflicts of Interest: All authors have completed the ICMJE uniform disclosure form (available at http://dx.doi.org/10.21037/jtd.2020.03.03). The authors have no conflicts of interest to declare.

Ethical Statement: The authors are accountable for all aspects of the work in ensuring that questions related to the accuracy or integrity of any part of the work are appropriately investigated and resolved. The study was approved by Shanghai Cancer Center Ethical Committee. Informed patient consent is not required for the data released by the SEER database because cancer is a reportable disease in every state in the United States.