To overcome the difficulties encountered in the surgical resection of tiny pulmonary nodules, we conducted preoperative CT-guided percutaneous marking until 2016, as reported previously (5). However, due to concerns regarding fatal complications such as air embolism (6-8), we recently started using a preoperative marking technique known as virtual-assisted lung mapping (VAL-MAP), which is a novel bronchoscopic dye marking technique (9-12). VAL-MAP comprises multi-spot dye marking performed under virtual bronchoscopy (9-14). A prospective multi-center trial showed that VAL-MAP has reproducible efficacy (13). However, another prospective multi-center study reported that about 12% of sublobar lung resections performed using VAL-MAP failed to acquire adequate resection margins larger than the tumor diameter or 2 cm (14). As VAL-MAP is a lung surface marking technique, the deep resection margin is the most significant factor affecting successful resection with sufficient resection margins.

The present study evaluated the efficacy and limitations of two lung surface marking techniques: CT-guided percutaneous marking and VAL-MAP. We analyzed the surgical outcomes of both procedures and evaluated the risk factors for resection failure.

The present single-center retrospective study included patients who underwent CT-guided percutaneous needle marking (CT-guided localization) or VAL-MAP from October 1998 to April 2018 at The University of Tokyo Hospital. The inclusion criteria were patients who underwent pulmonary wedge resection with curative intent for malignant lung tumors after a preoperative localization procedure. The exclusion criterion was missing data. Both procedures were indicated for patients with pulmonary nodules that were challenging to identify intraoperatively.

CT-guided localization was performed as previously described (5). In brief, a 21-gauge hookwire marker (Hakko Medical, Tokyo, Japan) was placed near the nodule under CT guidance after administration of local anesthesia by board-certificated radiologists on the day of surgery. Another chest CT scan was performed immediately after the procedure to confirm that the marker was appropriately placed.

The VAL-MAP procedure was conducted on the day of surgery or 1–2 days before surgery as previously described (9,13). While the patient was under local anesthesia and mild sedation, clinicians performed the bronchoscopic procedure using a bronchoscope (BF-260F or BF-P260F; Olympus, Tokyo, Japan). Using virtual bronchoscopic images, a metal-tipped catheter (PW-6C-1; Olympus) preloaded with 1 mL of indigo carmine was inserted through the working channel of the bronchoscope into the target bronchus. Clinicians injected indigo carmine into the target bronchus after confirmation of the appropriate location of the catheter tip under X-ray fluoroscopy. This procedure was repeated multiple times for multiple markings. After the dye injections, a chest CT scan was performed to reconstruct three-dimensional images that showed the actual locations of the markings and the target nodules.

All statistical analyses were performed with EZR (Saitama Medical Center, Jichi Medical University, Saitama, Japan, 2012) (18). The level of significance was set at P<0.05.

This observational study was approved by the Ethics Committee of The University of Tokyo (approval number 2406-5). The requirement for written informed consent was waived because of the retrospective nature of this chart review.

CT-guided localization was performed in 85 patients from October 1998 to July 2016, whereas VAL-MAP was performed in 130 patients from January 2014 to April 2018. Of these, 119 patients with 153 nodules met the eligibility criteria (Figure 1). The characteristics of the patients and resected nodules in the CT-guided localization group and VAL-MAP group were summarized in Table 1. The two groups significantly differed regarding patient age, lesion size, required resection depth, appearance of nodules, and pathological diagnosis (Table 1). 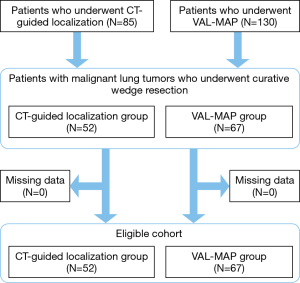 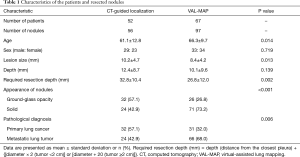 Table 1 Characteristics of the patients and resected nodules
Full table 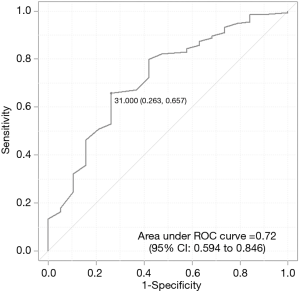 Figure 2 ROC curve for required resection depth as a predictor of successful resection. The optimal cutoff depth was identified as 31 mm, with a 1-specificity of 26.3% and sensitivity of 65.7%. ROC, receiver operating characteristic; CI, confidence interval.

In the CT-guided localization group, the successful resection rate was significantly worse for nodules with versus without intraoperative adhesion (54.5% vs. 86.7%; P=0.048; Figure 4A). In the VAL-MAP group, the successful resection rate did not significantly differ for nodules with versus without adhesion (85.7% vs. 93.4%; P=0.491; Figure 4B).

The present study revealed that intraoperative adhesion negatively affected curative wedge resection of small pulmonary nodules (Table 2, Figure 3B). The negative effects of intraoperative adhesion were especially notable when CT-guided localization was used (Figure 4A), while VAL-MAP was less influenced by intraoperative adhesion (Figure 4B). This may be because VAL-MAP provides multiple-spot marking and mapping for each nodule, while CT-guided localization only provides one marking for each nodule. Even if one VAL-MAP marking is not visible due to adhesion, the surgeon may be able to use other visible markings to successfully localize the target nodule (7). This advantage of VAL-MAP may have led to the relatively high successful resection rates regardless of the presence of adhesion (Figures 3A,4B).

The present study did not draw a definitive conclusion regarding the difference in the efficacy of CT-guided localization versus VAL-MAP. Although univariate analysis showed a significant association between VAL-MAP and successful resection (Table 2), surgeons tended to use CT-guided localization for nodules with a greater required resection depth (Table 1), and this confounding factor would have contributed to the relatively low successful resection rate (Table 2, Figure 3A). However, considering the relative resistance to intraoperative adhesion (Figure 4B) and the safety profile (15,20,21), we consider VAL-MAP the preferred method for preoperative lung marking for curative wedge resection.

The present study had some limitations. First, it was a small single-institutional retrospective study. Because of the retrospective nature, it would be challenging to compare the two marking techniques appropriately in the present study. Second, the constancy assumption may have been violated, as surgeons’ concerns about the resection margins and the quality of markings would have greatly changed over the decades included in the study period. In our institute, indication of lung surface markings and planned surgical procedure has been preoperatively discussed for each nodule among certificated surgeons. However, actual design of wedge resection considering surgical margin for each nodule has depended on each certificated surgeon. Surgeon’s bias could not be avoided.

We thank Kelly Zammit, BVSc, from Edanz Editing (www.edanzediting.com/ac), for editing a draft of this manuscript.

Funding: This study was supported by the Japan Agency for Medical Research and Development (18ck0106244h0003).

Conflicts of Interest: All authors have completed the ICMJE uniform disclosure form (available at http://dx.doi.org/10.21037/jtd.2020.04.43). JN reports grants from Astellas, grants from Taiho Pharma, outside the submitted work. MS serves as an unpaid editorial board member of Journal of Thoracic Disease from Oct 2018 to Sep 2020. The other authors have no conflicts of interest to declare.

Ethical Statement: The authors are accountable for all aspects of the work in ensuring that questions related to the accuracy or integrity of any part of the work are appropriately investigated and resolved. This observational study was approved by the Ethics Committee of The University of Tokyo (approval number 2406-5), and was conducted in compliance with the Declaration of Helsinki.