Interstitial lung disease (ILD) is a chronic progressive disease that is associated with increased morbidity and mortality. ILD is also associated with many symptoms, including shortness of breath and cough; as the disease progresses, these symptoms impair the activities of daily living (ADL) and health related quality of life (HRQOL) (1). Therefore, it is very important to use ADL to evaluate the disease progress and determine an appropriate treatment.

The 6-min walk test (6MWT) is a practical and simple tool correlated to poor HRQOL (2), which used to determine lung function impairment (2,3), physical inactivity (4) and mortality (2,5-7) in ILD patients. However, ILD causes dyspnea or exertional desaturation, which may make it difficult or impossible to perform the 6MWT. Therefore, clinical data of the 6MWT for ILD patients are limited.

The primary purpose of the present study was to determine the efficacy of 4MGS for ILD patients by comparing the efficacy of 6MWT and 4MGT. The secondary purpose of this study was to consider the parameters that are related to 4MGS and 6MWT by investigating the correlations among parameters such as arterial blood gas levels, pulmonary function test (PFT) results, HRQOL, muscle strength according to skeletal muscle mass index (SMI) and physical activity in ILD patients.

This study is a prospective cohort study performed at Kobe City Medical Center General Hospital from November 2017 to February 2018. Fifty-two patients with chronic fibrosing ILD who came to the outpatient yard within the observational period were eligible for the criteria and 51 patients are included (one patient did not consent to the study). All patients included in this study were older than 18 years and were diagnosed according to clinical, radiological and histopathological findings. They had been diagnosed with any ILD by the radiological finding that linear or reticulonodular interstitial infiltrates on chest computed tomography, or consistent histopathological findings.

Idiopathic pulmonary fibrosis (IPF) was diagnosed according to the 2011 American Thoracic Society/Europe Respiratory Society/Japanese Respiratory Society/Latin American Thoracic Association official statement (12). The diagnosis was determined by high-resolution computed tomography (HRCT) images and surgical lung biopsy specimens. If the lung biopsy results were not available, IPF was diagnosed based on the eligibility criteria from the guideline. Collagen vascular disease-associated ILD (CVD-ILD) was diagnosed from the symptom, autoimmune antibody, HRCT images and histopathological findings.

Patients were excluded if they experienced difficulty understanding or completing the questionnaire, if they had an active cardiovascular disease (e.g., poorly controlled severe heart failure or arrhythmia, cardiomyopathy, or vascular disorders), a predominantly obstructive lung disease diagnosed from the result of pulmonary function test, difficulty walking because of orthopaedic conditions, or a history of acute exacerbation of ILD within 1 month of the study inclusion.

This study was approved by the Institutional Review Board of Kobe City Medical Center General Hospital (No. zn170913). All patients were provided with written informed consent.

The 4MGS and 6MWT

4MGS test performed according to standardized methods by trained operators at the rehabilitation room (10). The test was performed twice, and the faster results were recorded as the gait speed. Patients walked 4 m and then another 1 m to determine the acceleration and deceleration zones.

The 6MWT was performed once, using modified criteria. In this study, patients walked around a circular course for 6 min; however, apart from this change, the other protocol followed the American Thoracic Society criteria (13). The following parameters were assessed: distance walked within 6 min, baseline arterial oxygen saturation (according to pulse oximetry), minimum arterial oxygen saturation during exercise (according to pulse oximetry) and modified Borg dyspnea score (determined immediately after exercise).

HRQOL questionnaires and assessments of dyspnea and cough

The quadriceps muscle strength was used to evaluate muscle strength and was measured using a hand-held dynamometer µTasF-1® (anima, Tokyo, Japan) with the patient in the sitting position with the knee flexed at 90° over the end of the bed. Forced isometric knee extension movements were measured for 5 s twice on each side [quadriceps twitch force (TwQ), Nm]. Using the TwQ maximum value and body weight (kg) measurements, the quadriceps maximal voluntary contraction force (QMVC; Nm/kg) was measured and recorded as the muscle strength.

Physical activity was measured by uniaxial accelerometry Lifecorder GS® (SUZUKEN, Aichi, Japan). Participants used the equipment for 1 week to measure their daily steps. The daily steps, except for those on the first and last days, were counted and averaged (steps per day); these steps were considered as the physical activity. 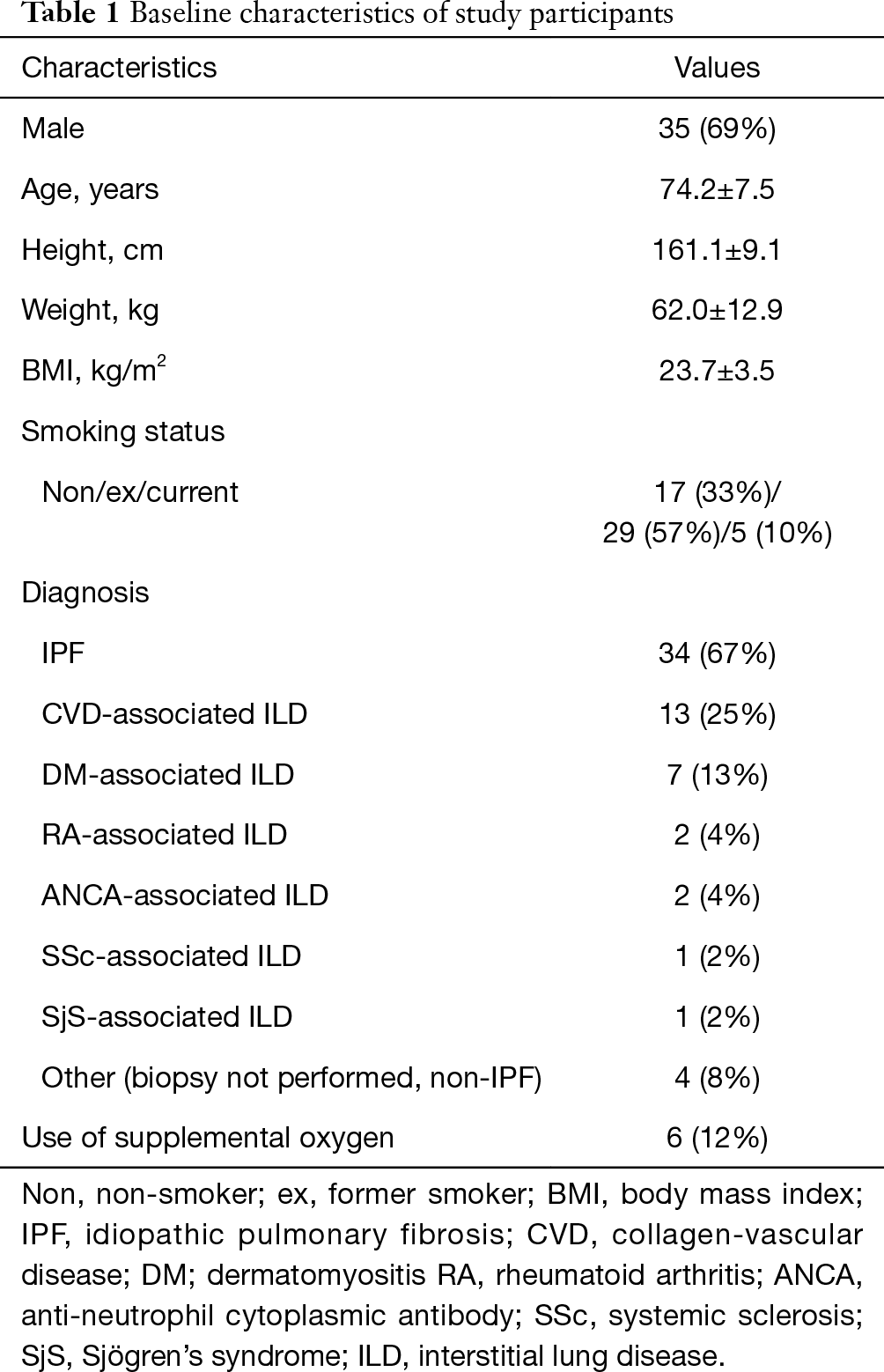 Table 2 shows lung function measurements, arterial blood gas measurements, physical capacity and physical activity. There was a loss of data about physical activity in only one patient. The pulmonary function test showed normal-to-severe volume capacity (2.58±0.74 L), percentage of predicted volume capacity (82.1%±15.9%) and percentage of predicted diffusion capacity of carbon monoxide (73.8%±26.4%). The arterial blood gas analysis suggested normal-to-severe PaO2 (83.5±21.6 mmHg), but the blood gas pH was completely normal (7.40±0.03). Physical capacity was measured using quadriceps femoris torque (1.57±0.53 Nm/kg), grip strength (28.0±8.5 kg), physical activity (3,709.6±725.9 steps/day) and SMI (7.32937±1.26356 kg/m2). Physical activity was not evaluated for one patient because that patient stopped attending follow-up examinations and the device could not be recovered. The walking distance, minimal SpO2 and Borg scale score after the 6MWT were 429.1±123.9 m, 88.7%±5.8% and 4 (range, 2–5), respectively. The 4MGS varied widely between individuals with severe impairment to normal (1.05±0.24 m/s). 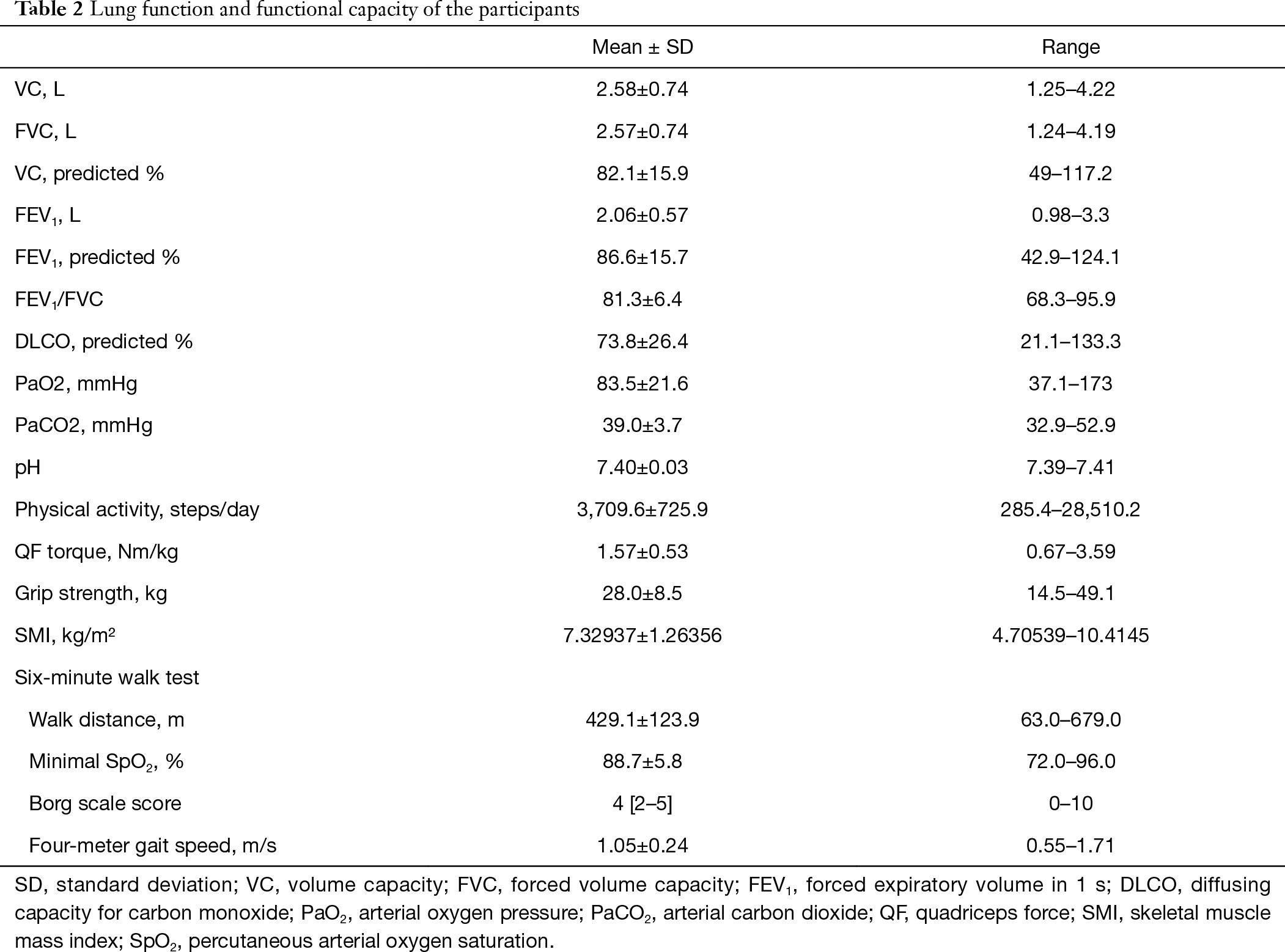 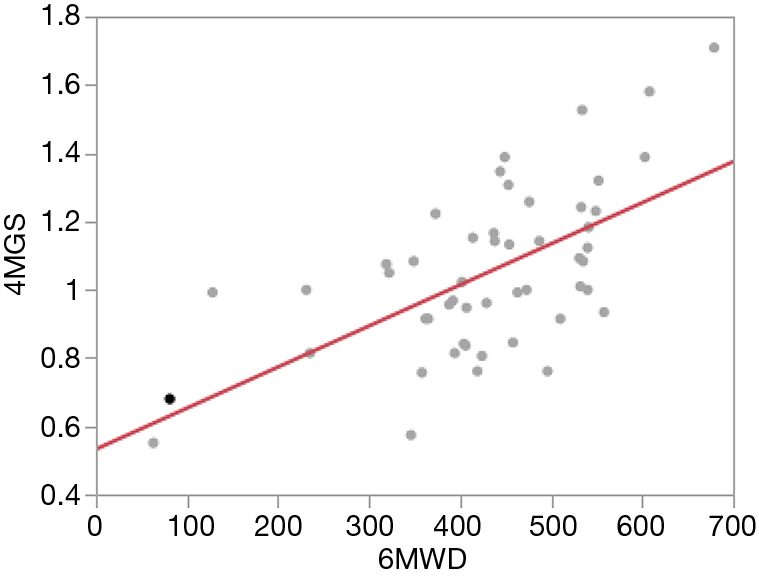 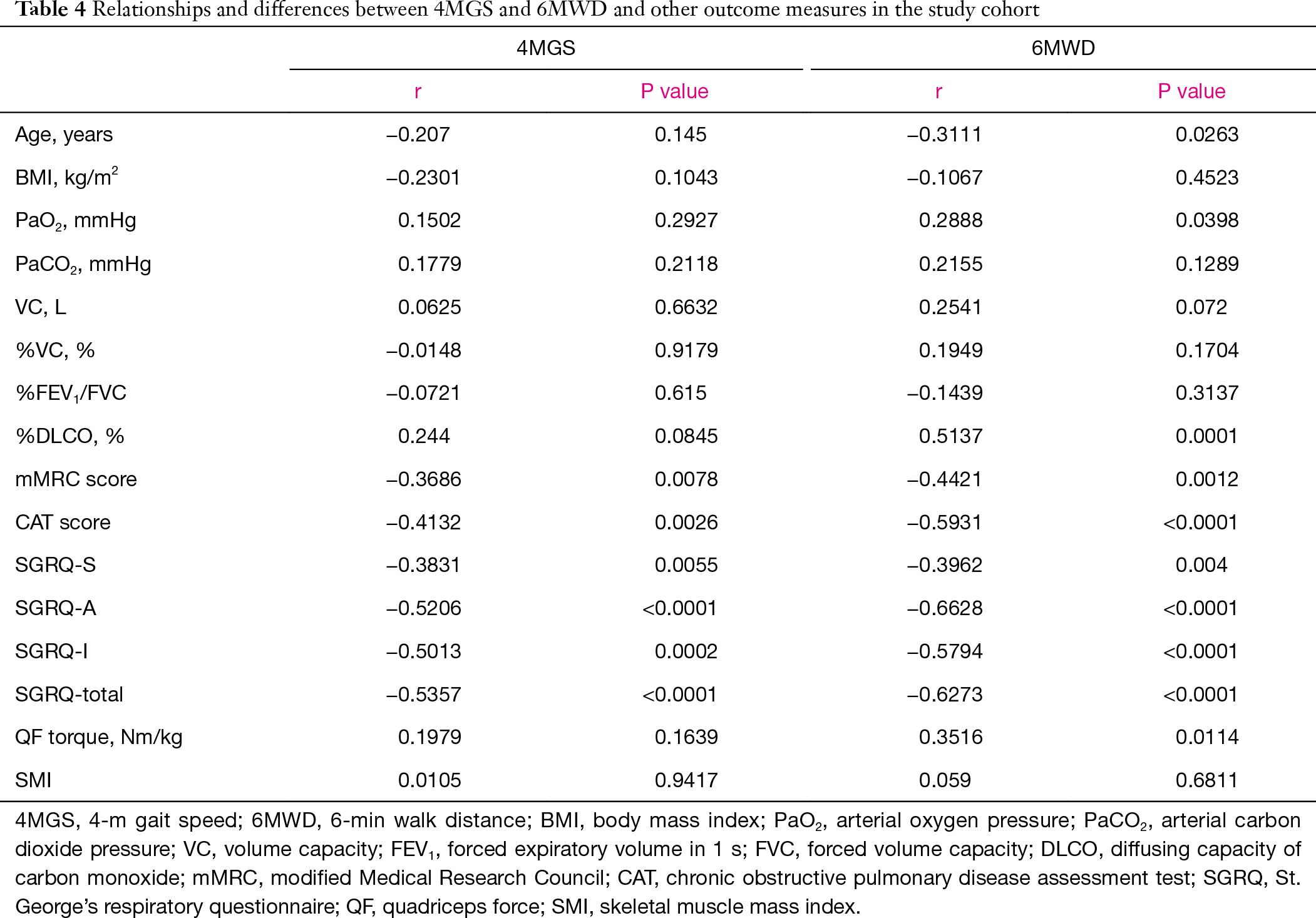 Table 5 shows the results of the forward stepwise multiple regression analyses that identified the variables that were correlated with 4MGS and 6MWD. The 6MWD was correlated with patient age, PaO2, %DLCO, mMRC score and SMI score. However, the 4MGS was associated only with the mMRC score.

In general, the 6MWT is the most widely used and reliable tool for ILD patients. However, this test had several limitations. First, the test requires a wide 30-m course. Second, dyspnea and desaturation for ILD patients occur during exercise, limiting the walking distance; thus, this walking distance may not be appropriate for evaluating all patients. The 4MGS does not have established utility, but it does have several attractive properties. It is inexpensive, can be performed quickly and requires little space (18). Because most adults are familiar with walking, the test is easy to understand and has been shown to be reliable, even when used for individuals with cognitive dysfunction.

The 4MGS has been recommended as a potentially useful marker of multisystemic well-being for community-dwelling older adults (19). Slow 4MGS is a consistent risk factor for disability, cognitive impairment, nursing home admission, falls, cardiovascular mortality and all-cause mortality (19-22). The 4MGS is an established marker of the exercise capacity of the elderly, and it has been correlated with other function measurements (23,24). The 4MGS is associated with age (25), HRQOL (26), dyspnea (26), lung function (25) and functional capacity (11,26) of COPD patients. We could not find previous studies on the correlation between muscle strength and 4MGS. However, the results of other studies cannot be compared because there is no standardised method for measuring the usual gait speed, including 4MGS.

There have been several reports of correlations between 6MWD and 4MGS in ILD patients. DePew et al. (27) studied 70 individuals with chronic lung disease (n=55 ILD; IPF data not reported) and demonstrated a strong positive correlation between the 4MGS and 6MWD (r=0.70) and a significant negative correlation with mMRC score (r=0.44) for the entire group. However, this study included not only ILD patients but also other respiratory failure patients. Nolan et al. (28) studied 111 patients (n=46 baseline; n=65 validation) with IPF and demonstrated a significant correlation between the 4MGS and 6MWD (r=0.76; P<0.0001). However, in Nolan’s study, they did not study muscle strength and physical activity, and the participants were limited to outpatients attending specialist ILD clinics at tertiary centres. Our study also showed a significant correlation between 4MGS and 6MWD, which supported the efficacy of 4MGS in ILD patients. The 4MGT is a simple functional performance measure and stratification tool that is correlated with 6MWT in general hospital settings.

In this study, we investigated the parameters that were related to the correlation between 4MGS and 6MWD by investigating the correlation of these measures with arterial blood gas, PFT, QOL, muscle strength, SMI and physical activity. Dyspnea score of SGRQ and mMRC scores correlated well with 4MGS. However, both univariate and multivariate analyses found no significant correlation between the 4MGS and age, respiratory function, PaO2, muscle strength and SMI.

For ILD patients, the 6MWT was correlated with symptoms (29), HRQOL (30), lung function (29) and functional capacity (30). Desaturation and 6MWD were correlated with mortality (30,31), and pulmonary rehabilitation increased the 6MWD (32). Data concerning the 4MGS for ILD patients are limited, but a previous study has shown a significant correlation between 4MGS and dyspnea or poor prognosis, despite the lung capacity or HRCT parameters (28).

Our data indicated that 6MWD correlated with more factors than 4MGS. Although 4MGS correlated with the disease symptoms, it did not correlate with age, lung capacity, muscle strength and SMI score. Previous studies have indicated that 4MGS is not a measure of peak exercise capacity (26,28), and therefore, 4MGS does not correlate with lung capacity, muscle strength and SMI score. Our study supported the previous data and suggested that poor 4MGS did not result from skeletal muscle weakness or decreased lung function; instead, it resulted from dyspnea.

The present study had several limitations. First, this was a single-centre study and there was selection bias in the patient population. Second, this study population was heterogeneous because various ILD patients were included without their ILD phenotype being distinguished. The histology of some patients was not evaluated because of age, impaired ADL, or refusal of the patient. Third, some of patients with relatively mild to moderate respiratory dysfunction were included in the study. Fourth, the 6MWT were performed only once because of patients age or impaired ADL and it may be several errors in the result of the test. The additive research about the more severe respiratory dysfunction patients will be needed.

The 4MGS was significantly correlated with the 6MWD. Furthermore, 4MGS can be a useful evaluation tool for ILD patients, especially those who cannot perform the 6MWT. However, 4MGS has a weaker correlation with age, lung capacity and muscle strength than 6MWD, indicating that 6MWD reflects more factors than 4MGS. the utility of the 4MGS as a functional performance measure is uncertain. The longitudinal validity, minimal change of significance, prognostic value for 4MGS in ILD populations are unknown.

Ethical Statement: The authors are accountable for all aspects of the work in ensuring that questions related to the accuracy or integrity of any part of the work are appropriately investigated and resolved. This study was approved by the Institutional Review Board of Kobe City Medical Center General Hospital (No. zn170913). All patients were provided with written informed consent.