Video-assisted thoracic surgery (VATS) is increasingly being performed for partial lobectomy for pulmonary nodules because it is less invasive than thoracotomy and offers the possibility of therapeutic diagnosis (1,2). However, because small or ground-grass opacity nodules are difficult to detect on thoracoscopy, localization is required prior to VATS (3,4). Several percutaneous localization techniques have been reported, including hook-wire insertion (5-7), radionuclide injection (7,8), contrast medium (lipiodol or barium) injection (9-11), and dye injection (12-17). However, these each have advantages and disadvantages, and there is no consensus regarding which technique is superior for lung nodule localization.

Recent studies have reported the effectiveness of lung nodule localization using a mixture of dye material and contrast medium (18,19). The injection point of the material can be detected on thoracoscopy by dye pigmentation on the lung surface. In the event that the pigmentation is unclear, the injection point can be confirmed using intraoperative fluoroscopy because the mixture is radiopaque. However, the optimal combination of dye and contrast medium for this technique is unknown. In addition, a previous study has reported the usefulness of adding lidocaine gel to the mixture (19,20), but the advantages of doing so have not been well investigated.

The aim of this study was to evaluate and compare the characteristics of various combinations of pigments and radiopaque materials and determine the most suitable type of material for localization of pulmonary nodules prior to VATS.

Stability was evaluated by observing changes in the mixtures in the test tube with time. For each liquid material, 5 mL were added to a test tube, which was photographed immediately and at 15 min, 30 min, 45 min, 1 h, 3 h, 12 h, 1 day, and 2 days after preparation. An X-ray image was taken using a fluoroscopic apparatus (Infinix Celeve-I INFX-8000C; Canon Medical Systems Corp., Otawara, Japan) at the same timings as the photographs.

We compared the visibility of each liquid material after its injection into a lung phantom. For each material, a 23-gauge needle (Terumo Cattelan Needle; Terumo Corp., Tokyo, Japan) was inserted 1 cm into a pig lung phantom that had been expanded via an intubation tube under CT fluoroscopic guidance (Aquilion LB; Canon Medical Systems Corp., Otawara, Japan) and 0.5 mL of the material was injected while withdrawing the needle until the material reached to the lung surface. The CT image was obtained immediately after injection. The area of the injected material was measured on the slice showing the widest extent.

The viscosity of each material was measured five times, and each material was injected five times into the pig lung phantom. Data are expressed as the mean ± standard deviation. The correlation between viscosity and area in the pig lung phantom was calculated by correlation coefficients. The correlation was defined as very weak, weak, moderate, strong, and very strong when the correlation coefficient value was 0≤r<0.2, 0.2≤r<0.4, 0.4≤r<0.7, 0.7≤r<0.9, and 0.9≤r<1.0, respectively. Statistical analyses were performed using SPSS software (SPSS for Windows, version 24; IBM, Armonk, NY, USA).

Characteristics of the liquids 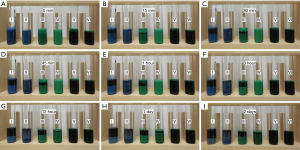 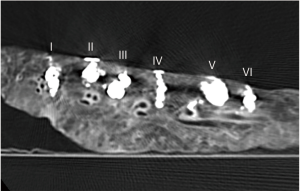 Figure 3 CT image of the pig lung phantom after injection of each radiopaque dye material. All materials were visualized as areas of high attenuation. 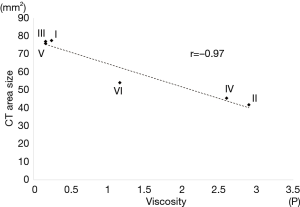 Figure 4 Graph showing the relation between viscosity and area on CT after injection in the pig lung phantom. Very strong negative correlation was detected (r=–0.97).

The puncture point of each material could be detected easily on the thoracoscopic image (Figure 5A). On near-infrared fluorescence imaging, ICG fluorescence was not detected at any injection point, even for materials containing ICG (Figure 5B).

Figure 5 Thoracoscopic images of the surface of the pig lung phantom after injection of each dye material. (A) The injection point of each material is easily detected. (B) Near-infrared fluorescence image shows no enhancement of injected materials containing ICG. ICG, indocyanine green.

The differences found among the radiopaque dye materials evaluated in the present study may assist in selecting the optimal material for localizing pulmonary nodules prior to VATS.

The mixture of indigo carmine and lipiodol and the mixture of w-ICG and lipiodol separated in the test tube only 15 minutes after preparation. Although it is best to perform preoperative localization immediately before surgery because the dye becomes less detectable with time (19), the timing of the localization procedure can be delayed by the availability of the CT and surgery rooms. Sometimes, the procedure must be performed several days before surgery. Thus, stability is an important quality for the material used to localize pulmonary nodules. Recently Seol et al. reported that the proportion of indigo carmine, lipiodol, and lidocaine gel of 5:5:2 was most stabilized (20). We also experimented with not exactly the same but similar proportion of 2:2:1 and showed good stability. Thus, these proportions seem to be ideal to create mixture for preoperative marking.

The pig phantom experiment showed very strong negative correlation between viscosity and area. In other words, by using highly viscous materials, diffusion is suppressed and localization is more likely to be successful. In addition, high viscosity may act to prevent the flow of liquid materials into the vessels. Yoshida et al. reported an instance of flow of the mixture of dye and contrast medium into the vessels at the time of percutaneous lung nodule localization (21). To the best of our knowledge, no studies have reported ischemic complications following lung nodule localization using liquid materials, but lipiodol migration to the brain has been reported after trans-arterial chemoembolization or lymphatic embolization using lipiodol (22,23). Use of high viscosity materials might prevent migration and ischemic complications.

In this study, the puncture point of each material in the pig lung phantom could be detected easily. However, as there was no blood flow or respiratory motion in the phantom, the puncture and injection might have been easier than in a clinical localization procedure. Moreover, as we evaluated the appearance immediately after injection, diffusion might not have advanced in this short time frame.

Indigo carmine and methylene blue are difficult to detect on lungs with severe anthracosis, in which case they show as black or dark color tones (12,14). ICG is reported to be effective for lung surface marking in this condition because of its green color (14-17). The color tones of the mixtures of w-ICG and lipiodol (III) and of w-ICG, lipiodol, and lidocaine gel (IV) were brighter than the other materials on thoracoscopy after injection in the pig lung phantom. We hypothesize that these mixtures might be effective also in lungs with severe anthracosis. Further investigations should include evaluation of the appearance of the surface markers after injection in human lung.

This study has several limitations. First, because we used a pig lung phantom, we could not evaluate the effects of blood or lymph flow, or respiratory movement. Vital reactions were also unclear. As there are some metabolic differences between humans and pigs, the materials might show an altered appearance in human lung. Second, as we did not observe the lung phantom within the thoracic cavity, we could not evaluate the actual appearance on VATS. Third, the examination was performed at room temperature (25 °C). The characteristics of the liquids might have been different than at body temperature. Fourth, we evaluated only the selected materials and mix proportions. Our selection was based on costs, availability, and technical simplicity; however, it is not impossible that there might be more effective materials and mix proportions. Despite these limitations, the present study revealed various characteristics of radiopaque dye materials, which will be useful for selecting the optimal materials for use in localization of pulmonary nodules prior to VATS.

Funding: This work was supported by the Aichi Cancer Research Foundation.

Conflicts of Interest: All authors have completed the ICMJE uniform disclosure form (available at http://dx.doi.org/10.21037/jtd-19-4057). TH reports grants from Aichi Cancer Research Foundation, during the conduct of the study. The other authors have no conflicts of interest to declare.