Lung cancer is the most frequent malignancy and the leading cause of cancer death worldwide (1) Lung squamous cell carcinoma (LUSC) is the second frequent subtype of lung cancer, accounts for approximately 30% (2,3). Although the progress has been made in early diagnosis and therapy, the 5-year survival of LUSC patients remains dissatisfactory. There is still a lack of effective biomarkers for identifying patients with high risk of recurrence and poor prognosis. Hence, there is an urgent need to find effective biomarkers to improve the ability of clinical prognosis prediction and make individualized therapy decisions.

Emerging studies have indicated that epigenetics plays a vital role in the occurrence, development, therapy response, and outcome of human tumors (4,5). The occurrence and development of cancer have been accompanied by abnormal DNA methylation, which has great potential as a biomarker of prognosis (6). For instance, p16 methylation induced paclitaxel resistance in non-small cell lung cancer (NSCLC), so it can predict paclitaxel chemosensitivity (7). KLF2 region 4 hypermethylation led to the downregulation of KLF2 and promoted the proliferation and metastasis in NSCLC cells (8). Downregulation of miR-1247 by DNA methylation promoted invasion and migration of NSCLC by targeting STMNI (9). Moreover, predictive models based on DNA methylation sites have been constructed in some tumors, such as ovarian serous cystadenocarcinoma, cutaneous melanoma, gastric adenocarcinoma and choroid plexus tumor (10-13). However, the prediction model based on DNA methylation sites remains to be constructed in LUSC.

In our present study, we aimed to construct a novel prognostic DNA methylation signature related to patient’s overall survival. The DNA methylation and follow-up data were downloaded from The Cancer Genome Atlas (TCGA) dataset. We performed several statistical methods, including univariate Cox regression, the least absolute shrinkage and selection operator (LASSO), and multivariate Cox regression methods to reduce dimensionality. As a result, an independent prognostic model based on 11-DNA methylation sites was successfully constructed. Besides, to improve the clinical practicability of the risk prognosis model, the metastasis stage and tobacco smoking history were integrated into the 11-DNA methylation signature and the nomogram was constructed.

LUSC patients were classified into training set and testing set by random grouping method. All initial analyses were performed in the training set to construct a signature based on the DNA methylation site and validated the signature in the testing set. The DNA methylation sites associated with the overall survival of LUSC patients were screened using univariate Cox proportional hazard analysis with P<0.05 as statistical significance. LASSO analysis is a high-dimensional indicator regression method, which obtains a more refined model by compressing some regression coefficients. LASSO analysis was used to screen the critical DNA methylation sites from the significant DNA methylation sites in univariate Cox regression analysis using R with glmnet package (Version 3.0-2, https://CRAN.R-project.org/package=glmnet). Thus, we performed multivariate Cox regression, stepwise regression, to reduce dimensionality and establish a risk score formula weighted by the corresponding coefficients. The univariate and multivariate cox regression analysis used survival package (Version 2.41-1, http://bioconductor.org/packages/survivalr/) in R language. The risk score of each patient in training set was calculated according to the above formula. According to the median value, patients were classified into low- and high-risk groups. Survival difference between the low- and high-risk group was assessed by the Kaplan-Meier (K-M) survival analysis using R with survival package (Version 2.41-1, http://bioconductor.org/packages/survivalr/). To evaluate the predictive performance at 5 years of the DNA methylation signature, the time-dependent receiver operating characteristic (ROC) curve was performed using R with survivalROC package (Version 1.0.3, https://CRAN.R-project.org/package=survivalROC). Subsequently, we perform K-M survival analysis and ROC analysis to evaluate predictive accuracy of this signature in the testing set based on the same cutoff value. The area under the curve (AUC) is used as the evaluation criterion of the signature.

Construction and evaluation of nomogram

We performed multivariate Cox regression analysis to examine whether constructed DNA methylation signature is independent of other clinical data, consisting of age, gender, tumor stage, TNM stage, and tobacco smoking history. According to the results of multivariate Cox regression analysis, we constructed a nomogram for individualized prediction of overall survival to predict 1-, 3-, and 5-year overall survival using R with rms package (Version 5.1-4, https://CRAN.R-project.org/package=rms). Then, we performed ROC curve to appraise the predictive performance of this nomogram and only the DNA methylation signature (5-year survival).

A total of 412 samples with 485,577 DNA methylation sites were acquired from the TCGA dataset, including 370 LUSC tissues and 42 paracancerous tissues. Among them, 363 LUSC samples with clinical follow-up information were further randomly divided into two groups, 183 patients as a training set and 180 patients as a testing set. The clinical data of age, gender, race, tumor stage, TNM stage, and tobacco smoking history was summarized (Table S1). Compared with the paracancerous tissues, 15,343 differential DNA methylation sites were selected in LUSC tissues using fold change >2 or <0.5 and FDR <0.01 as the criteria. 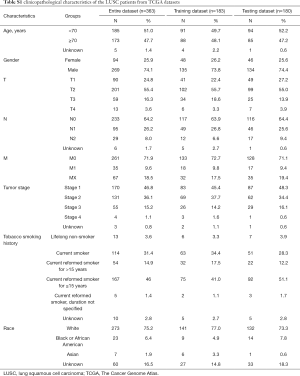 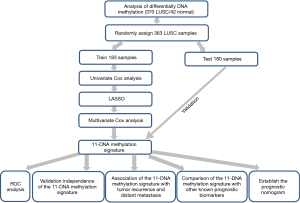 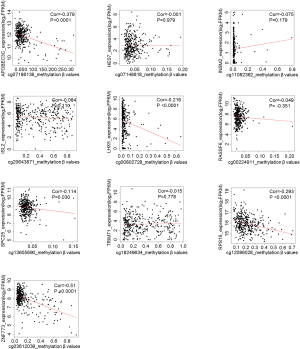 Figure S1 Correlation between methylation levels of each DNA methylation site and expression of corresponding gene was assessed by Pearson’s correlation test. 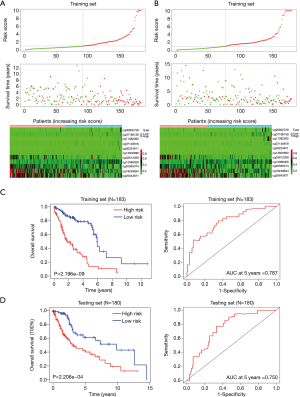 Figure 3 Distribution of the risk score, survival status, and β value of methylation sites in training set (A) and testing set (B). K-M survival curves along with the log-rank test and ROC analysis to evaluate performance of this risk score formula in training set (C) and testing set (D). AUC, area under the curve; K-M, Kaplan-Meier; ROC, receiver operating characteristic. 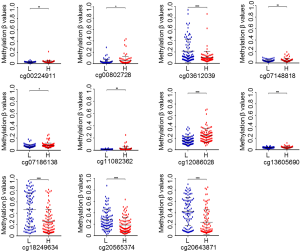 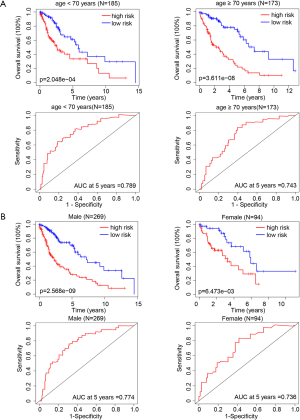 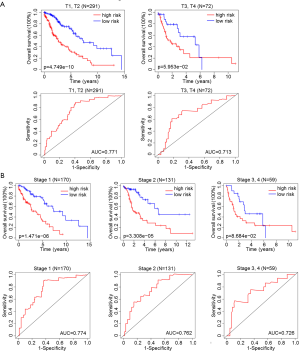 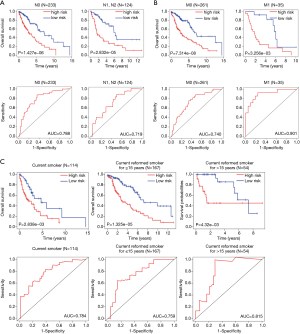 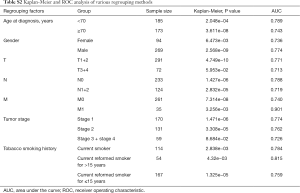 Establishment of the nomogram

According to the results from univariate analysis, histologic grade, tumor stage, lymph node stage, metastasis stage, and tobacco smoking history were significantly related to overall survival of patients with LUSC (Table 2). Through multivariate analysis of the above factors, metastasis stage and tobacco smoking history and the risk score, independent and stable prognostic factor (Table 2), were used to construct a nomogram (Figure 5A). Compared with the 11-DNA methylation signature, the nomogram shows higher accuracy of 5-year survival prediction (AUC =0.811, Figure 5B). 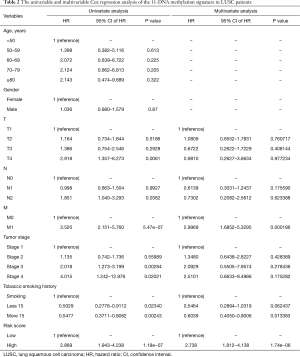 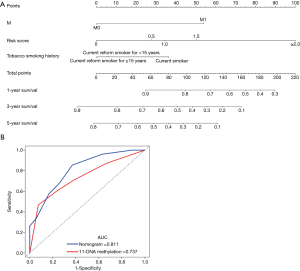 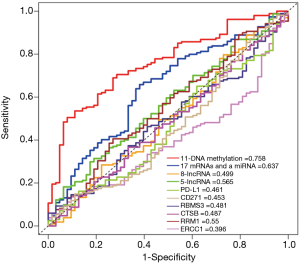 Figure 7 ROC curves were used to assess the sensitivity and specificity of the 11-DNA methylation signature and other known biomarkers in predicting the overall survival of LUSC patients. AUC, area under the curve; LUSC, lung squamous cell carcinoma.

Despite advances in the prevention, diagnosis, and therapy of LUSC over the past few decades, the 5-year survival rate remains low, less than 15 percent (17). Therefore, the prognostic prediction of LUSC patients is critical to the selection and improvement of appropriate treatment options. To distinguish between high- and low-risk patients for more effective management, previous studies developing a series of molecular biomarkers related to the prognosis of LUSC patients have focused on protein-coding genes or miRNAs or lncRNAs while ignoring the impact of methylation on patient’s survival. With the deepening of epigenetic research, increasing evidence has shown that DNA methylation is critical to gene regulation and is early events of some tumors. DNA methylation is one of the earliest detectable neoplastic changes that give it a unique advantage as cancer diagnosis and prognosis biomarkers (30-32). In addition, a prognostic signature formed by combining multiple DNA methylation sites has higher sensitivity and specificity than a single DNA methylation site (33). Our study emphasized the potential role for a combination of epigenetic biomarkers in improving prognosis prediction and providing tailored therapeutic decisions, as well as providing alternative biomarkers and therapeutic targets for LUSC patients.

Our study first identified differential methylation sites according to genome-wide DNA methylation analysis. We performed COX regression and ROC analysis to identify an 11-DNA methylation signature that was significantly related to overall survival of LUSC patients. To detect the predictive performance and independence of the 11-methylation signature, patients were regrouped based on different clinicopathological features (age, gender, tumor stage, TNM stage, and tobacco smoking history). We used K-M and ROC analysis to estimate the prognostic ability of the 11-DNA methylation signature in different subgroups. Based on the risk scores of the 11-DNA methylation signature, we performed risk stratification and survival prediction for LUSC patients. In addition, comparison of our 11-DNA methylation signature with other known prognostic biomarkers indicates that it has significantly higher sensitivity and specificity in the prognosis prediction of LUSC. Among these 11 methylation sites, 10 sites have corresponding reference genes. RASSF6 is a tumor suppressor with methylation of its promoter region leading to decreased expression, thereby promoting melanoma development and brain metastasis (34,35). ZNF773 has a higher level of DNA methylation in human papillomavirus-related oropharyngeal squamous cell carcinoma compared to normal samples (36). HES7 is a biomarker gene for early epithelial-mesenchymal transition in lung adenocarcinoma (37). SPC25 increases tumor stem cell characteristics in NSCLC and pancreatic cancer, and enhances cell proliferation and poor prognosis of breast cancer (38-40). TRIM71 promotes cell proliferation in NSCLC and hepatocellular carcinoma (41,42). Nevertheless, the relationship between five of these ten corresponding reference genes (LHX5, APOBEC3C, RPS18, ISL2, and INSM2) and tumor biology and the related molecular mechanisms have not been studied.

Gene expression is affected by epigenetic changes, and inactivation of tumor suppressor genes caused by DNA methylation is related to occurrence and development in multiple tumors, consisting of LUSC (43,44). Although DNA methylation can affect gene regulation, there are a few exceptions (45,46). In our signature, the expression of APOBEC3C, LHX5, SPC25, RPS18, and ZNF773 were negatively related to the methylation levels (P<0.05), but no association between the expression and the methylation level of other five genes (HES7, INSM2, ISL2, RASSF6, and TRIM71). Further, we will focus on verifying the biological functions of these 11-DNA methylation sites and their corresponding genes through more experiments, which may provide more targets and therapeutic decisions.

In conclusion, we constructed the first risk prognosis model based on DNA methylation site in LUSC, which had better stability and reliability and was currently the best predictor of overall survival in predicting LUSC patients. In addition, in order to better apply the risk prognosis model to clinical decision-making, a nomogram integrating the DNA methylation signature, metastasis stage, and tobacco smoking history was developed.

Conflicts of Interest: All authors have completed the ICMJE uniform disclosure form (available at http://dx.doi.org/10.21037/jtd.2020.03.31). The authors have no conflicts of interest to declare.