Brachiocephalic vein aneurysm: a systematic review of the literature

Congenital defects in vessel structure may cause brachiocephalic vein aneurysm, as described in 28% of patients (10/36 cases) (1,2,4,5,9,12-14,18). These have been reported in association with the histological absence of smooth muscle cells in the aneurysm wall or absence of the adventitia’s longitudinal muscle layer, supporting congenital weakness of the vessel wall as a potential underlying cause (4,24).

Brachiocephalic vein aneurysms have also been reported in association with mediastinal cystic hygromas (3%, 1/36 cases) (21). Among 15 cases of mediastinal cystic hygroma, eight patients were found to have venous aneurysms in the neck and thorax (27). The association between hygroma and venous aneurysms has been attributed to the close embryologic relationship between the lymphatic and venous systems (28).

Finally, there has been one report (3%) of brachiocephalic vein aneurysm as a manifestation of NF1 (22). Pathological examination of the resected aneurysm demonstrated diffuse neurofibroma with an infiltrative pattern. While cardiac and peripheral vascular problems are known clinical complications of NF1 (29), venous aspects of the disorder are poorly understood. Only three other cases of venous aneurysms have been reported in the setting of NF1, all of which involved the internal jugular vein (29-31). Although venous aneurysms are extremely rare manifestations of NF1, they remain a possible finding. 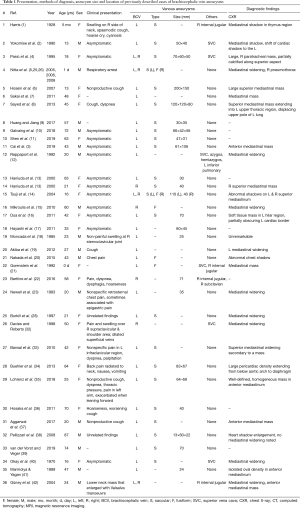 Brachiocephalic vein aneurysms are often incidental findings (56%, 20/36 cases). Widening of the mediastinum (28%, 10/36 cases) or presence of a mediastinal mass (47%, 17/36 cases) are the most common findings on chest radiographs. When incidental thoracic masses are suspected, they are often further characterized by computed tomography (CT) (conventional, contrast-enhanced CT or 3D CT) or venography [conventional, CT venography, or magnetic resonance (MR) venography]. Other imaging modalities for the diagnosis of brachiocephalic vein aneurysms include echocardiography, MR imaging (MRI) or duplex ultrasound. In some cases, more invasive approaches such as exploratory thoracoscopy are necessary to confirm diagnosis (13).

On results from cross-sectional imaging methods such as CT, contrast pooling, homogeneous enhancement similar to adjacent venous structures, and continuity with the thoracic veins are often indicative of venous aneurysms (43). Although contrast-enhanced CT is often sufficient to arrive at a diagnosis of brachiocephalic vein aneurysm, common imaging pitfalls are misdiagnosis of the aneurysm as either (I) a solid mediastinal tumour (1,34) or (II) a thymoma (9). As such, should there be any suspicion for misdiagnosis; further workup should be supplemented with the use of multi-modality imaging techniques such as venography, MRI, or transthoracic Doppler study for operative planning.

There is a wide spectrum of potential diagnoses for a mediastinal mass including thymoma, lymphoma, teratoma, neurofibroma, ectopic thyroid gland, lung neoplasm, and arterial aneurysm, among others (44). Despite its rarity, brachiocephalic vein aneurysm should be considered as a differential diagnosis upon discovery of a mediastinal mass, especially in the context of previously reported associations, including congenital malformations (1,2,4,5,9,12-14,18), hemangioma (5,19,20), hygroma (21), neurofibromatosis type 1 (NF1) (22), a history of vascular intervention and tumor retraction (19).

While multiple treatment options are available, established guidelines regarding therapy for brachiocephalic vein aneurysms are lacking. Treatment is largely determined by clinical presentation, characteristics of the aneurysm, patient decisions, and surgical candidacy. Current treatment approaches include conservative management and surgery. 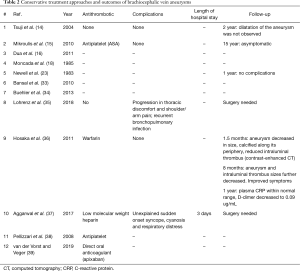 This approach has been suggested as a reasonable option for patients who are asymptomatic with small, non-enlarging brachiocephalic vein aneurysms (6,14,16). The majority of patients treated conservatively had saccular brachiocephalic vein aneurysms (75%, 9/12 cases). The rest had either fusiform brachiocephalic vein aneurysms (17%, 2/12 cases) or the aneurysm type was not identified. The conservative approach is also recommended for patients who are poor surgical candidates (34) or those who do not wish to receive more invasive treatment (33). Upon presentation of thrombotic material, antithrombotic therapy should be discussed. Of the 12 patients who received conservative treatment, 4 (33%) had no complications, 2 (17%) required urgent surgery, and information on follow-up for the remaining 6 (50%) was not available.

Conservative treatment with observation only, was reported in 7 cases (58% of patients who received conservative treatment). Of these patients, 3 had no thrombi (16,33,35), 1 had thrombus but was a poor surgical candidate (34) and the presence or absence of thrombi was not mentioned in 3 cases (14,18,23). At a 2 year (14) and 1 year follow-up (23), complications or dilation of the aneurysm were not observed in two cases (14,23). During the 2 year follow-up, one case experienced worsening of symptoms and required explorative surgery (35). Follow-up information was not mentioned for the remaining four cases (16,18,33,34).

Two cases (17%) of antiplatelet therapy for brachiocephalic vein aneurysm have been described (15,38). One case was treated with ASA at 160 mg/day (15), while information on the antiplatelet drug and dosing regimen for the other case is not available (38). One patient was lost to follow-up (38) and the other was on antiplatelet treatment for 15 years and remained asymptomatic (15).

Anticoagulation with warfarin, low molecular weight heparin or direct oral anticoagulant (apixaban) have been reported in 3 cases in the management of brachiocephalic vein aneurysms (36,37,39). Of the 3 cases treated with an anticoagulant, 2 had thrombosed aneurysms (36,37) whereas 1 was continued on apixaban given pre-existing atrial fibrillation (39). One patient experienced successful reduction in size of the intraluminal thrombus and the aneurysm, as evaluated by contrast-enhanced CT at 1.5 and 8 months post-treatment. One patient treated conservatively with low-molecular weight heparin (37) developed sudden onset syncope, cyanosis and respiratory distress from the aneurysm, requiring emergency surgery. One patient was lost to follow-up (39). 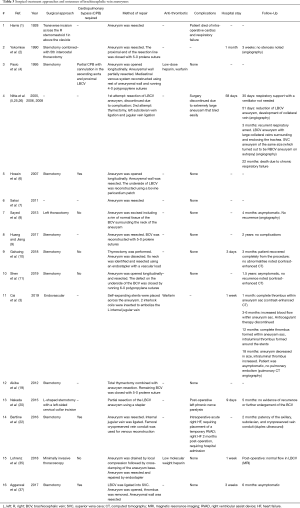 Among the reported cases, median sternotomy was the most common surgical approach (56%, 9/16 cases) given its versatility and ease for use with cardiopulmonary bypass (CPB) (2,4,6,9-11,19,22,37), followed by thoracotomy (12%, 2/16 cases) (2,8) and thoracoscopy (6%, 1/16 cases) (35). CPB was established in 4 cases (25% of patients who received surgical treatment) to provide clear anatomic details and mobilization of the aneurysm, prevent excessive blood loss, reduce the risk of embolization, and allow for decompression of the cerebral venous system in preparation for superior vena cava cross-clamping, if necessary (4,6,11,22). Endovascular treatment is also becoming a new therapeutic approach for patients with brachiocephalic vein aneurysms, as one patient (6%) was successfully treated with stent placement and coil embolization of the left brachiocephalic vein (3).

Brachiocephalic vein aneurysms were successfully resected in 81% of patients (13/16 cases). Intra-operative complications were reported in 3 cases (19%) (1,5,22,25,26). One patient died during an operation due to cardiac and respiratory failure (1). Nitta et al. reported another case where the surgery was discontinued due to friability of a large aneurysm (5). To reduce the size of the aneurysm, a thymectomy with left subclavian and jugular veins ligation was performed instead. Bartline and colleagues also described a case of intra-operative right heart failure that required implantation of a temporary right ventricular assist device (22). Post-operative complications were reported in two cases (13%), including left phrenic nerve paralysis (20) and right heart failure requiring hospitalization (22).

Patients spent 3 to 58 days in the hospital after surgical resection of brachiocephalic vein aneurysms (2,3,5,10,20,35,37). Post-operative anticoagulants (19% of patients) included heparin (4), low molecular weight heparin (35), and warfarin (3,4). One patient had heparin with bridging to warfarin for 3 months following surgery (4). One patient was on low molecular weight heparin once daily for 7 days post-operatively (35). And another patient received warfarin for 3-6 months following endovascular treatment of the brachiocephalic vein aneurysm (3).

The majority of patients (69%, 11/16 cases) had completion of follow-up. No complications or recurrence were noted in 8 cases (50%) (2,8-11,20,22,35). Symptoms were resolved in 3 cases (19%) (8,11,37). One patient died of chronic respiratory failure (26). Endovascular repair demonstrated aneurysmal shrinkage on chest CT 18 months after intervention, although increased intraluminal thrombus size was observed (3).

The prognosis of brachiocephalic vein aneurysms is good post resection with no reported cases of recurrence.

Brachiocephalic vein aneurysms are rare vascular lesions that often present asymptomatically as a widening of the mediastinum on the chest radiograph. Surgical aneurysmectomy is indicated in patients with symptomatic, saccular, expanding brachiocephalic vein aneurysms; those containing intraluminal thrombi; and those presenting with complications such as recurrent thromboembolism, rupture, or mass effect on surrounding structures. Surgical outcomes are acceptable with favorable prognosis post-resection and no recurrence reported.

Conflicts of Interest: All authors have completed the ICMJE uniform disclosure form (available at http://dx.doi.org/10.21037/jtd.2020.04.39). The authors have no conflicts of interest to declare.