Video-assisted thoracoscopic surgery (VATS) is an established surgical procedure for the treatment of early-stage lung cancer (1,2). More than 20 years ago, when open thoracotomy was the standard procedure, VATS had limited application due to immaturity of the instruments and techniques in Korea. Over time, however, surgeons gained familiarity with VATS, developed more convenient instruments, and improved their surgical techniques; currently, at our hospital, approximately 80% of early stage lung cancer operations are VATS procedures (3,4). VATS results in less postoperative pain and faster recovery than open thoracotomy (5). Also, VATS improves the survival of patients with early lung cancer (6,7).

Initially, multiportal (three- or four-port) VATS was the usual approach for lobectomy or segmentectomy. However, the development of new instruments and surgical techniques reduced the number of ports, enabling two-port VATS and eventually uniportal VATS, which is considered a form of evolution of multi-portal VATS (8). Some studies reported that uniportal VATS has advantages of less postoperative pain, faster recovery, decreased length of hospital stay, and potential earlier administration of adjuvant therapy than multiportal VATS (9,10). The advantages result from the use of only one intercostal space and the usual placement of the incision more anteriorly than in multiportal VATS.

From January 2017 to December 2018, 657 patients were diagnosed with non-small cell lung cancer (NSCLC) and underwent curative surgery at a tertiary hospital in Korea. Of those patients, 581 underwent anatomical pulmonary resection (segmentectomy, lobectomy, bilobectomy, and pneumonectomy). Among the 581 patients, 85 underwent uniportal VATS performed by one surgeon. Multiportal VATS was performed in the remaining 269 patients by 3 senior surgeons, using 3 or 4 ports. To reduce the selection bias, all data were obtained from consecutive patient data. The three senior surgeons had never performed uniportal VATS. However, each had more than 10 years of surgical experience with multiportal VATS. Clinicopathological characteristics and surgical outcomes in all cases of uniportal or multiportal VATS were analyzed and compared.

The junior surgeon began performing uniportal VATS in 2017. Previously, he was a clinical fellow at a tertiary hospital from 2013 to 2016. During his fellowship, he served as 1st assistant for lung cancer surgery; his experience consisted of more than 400 lung cancer cases with open thoracotomy or multiportal VATS. He did not perform any independent lung cancer surgery during that time and had no experience with uniportal VATS. In January 2017, he attended a uniportal VATS training program at Tongji University Shanghai Pulmonary Hospital in Shanghai, China (11). The hospital is an ultra-high-volume center in thoracic surgery where more than 10,000 lung cancer resections are performed annually. There, the surgeon learned the techniques of uniportal VATS lobectomy and segmentectomy by observing the operations of Dr. Diego Gonzalez-Rivas and also learned Dr. Diego’s surgical techniques from articles and videos (10,12-14)). Subsequently, the surgeon performed his first operation for the treatment of lung cancer in May 2017. Uniportal VATS had never before been performed at our hospital.

A skin incision was usually made in the 5th intercostal space between the mid- and anterior axillary lines. For right upper lobectomy, however, the 4th intercostal space was chosen. The incision length was usually 3 to 3.5 cm (Figure 1A,B). For masses larger than 3 cm, to allow removal of the resected lobe of the lung through the incision site, the working incision was extended to 4 to 5 cm. In most cases, however, the working incisions were no larger than 4 cm. The 30° high definition thoracoscope was always located at the top of the working wound. An energy device (HARMONIC ACE®) and curved long suction device (SCANLAN® Wolf Suction Instrument 9009-912) were located in the middle of the wound. The lung was retracted with a lung grasping clamp or suction device that was located in the lowest portion of the working wound (Figure 1C). After surgery, the chest tube was inserted into the thoracic cavity through the working incision, and the incision was closed layer-by-layer (Figure 1D).

Figure 2 Surgical techniques using energy and curved suction devices for lobectomy (A) and using a stapler to divide the right anterior trunk of the pulmonary artery (B).

Lymph node dissection was performed in every patient by en bloc resection of the lymph nodes and adjacent fat tissues. The lymph nodes were dissected using a non-grasping technique, which involved dissection of the surrounding tissue with an energy device, using a suction device for pushing or pulling without grasping the lymph nodes (Figure 3). Uniportal VATS segmentectomy was performed in the same way as in multiportal VATS. The segmental branch of the pulmonary artery was found and divided first. Next, the segmental bronchus was found by the same route and divided with a stapler. Lastly, the segmental vein was divided. The segmental planes were then all divided by staplers.

The clinicopathological characteristics and surgical outcomes of uniportal VATS were defined and compared with those of multiportal VATS. The Student t-test or Wilcoxon rank-sum test was used for continuous variables, and the χ2 test or Fisher exact test was applied for categorical variables. A P value <0.05 was considered statistically significant.

Table 2 shows the perioperative and postoperative outcomes of uniportal VATS. Postoperative complications occurred in 18 patients (21.2%). All complications were completely resolved before discharge from the hospital except for 2 cases of acute respiratory distress syndrome (ARDS). Of the 2 patients with ARDS, 1 had interstitial lung disease and the other had hypothyroidism. Both patients underwent lobectomy and the procedures were uneventful. However, 3 days postoperatively, both patients developed progressive, fatal pulmonary edema. Table 3 shows the comparison of surgical outcomes of lobectomy according to which of the 5 lobes were resected; no significant difference among the 5 lobes was identified. The operative time (Figure 4A) and intraoperative blood loss (Figure 4B) of uniportal VATS lobectomy tended to be similar from the first operation to the last operation even though the number of operations increased over time. 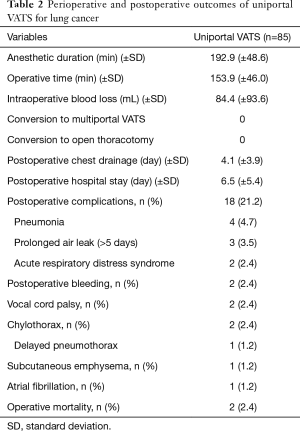 Figure 4 Scatter plot showing operative time (A) and intraoperative blood loss (B) of the uniportal VATS lobectomies performed by one surgeon from first to last cases.

Comparison of surgical outcomes between uniportal VATS and multiportal VATS 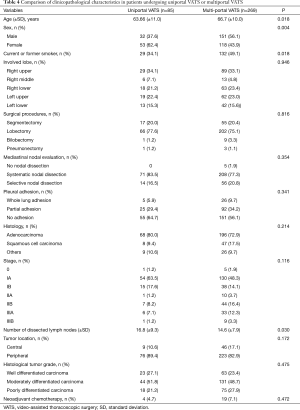 Uniportal VATS lobectomy was first performed in 2011 by Gonzalez et al. (16). Since his initial report, uniportal surgery has been actively performed for anatomical pulmonary resection in the treatment of lung cancer. Uniportal VATS has been considered more difficult than multiportal VATS because the operation is performed by inserting 2 or 3 surgical instruments and the thoracoscope into only one incision. Therefore, it has been thought that a surgeon can perform uniportal VATS only after fully learning the multiportal VATS technique. However, the uniportal technique has evolved considerably (10). The 30° thoracoscope placed at the top of the wound provides an optimal field of view similar to that of actual open thoracotomy (10). Moreover, if the surgery is done in the order determined for each lobe using a long-curved suction device and energy device, the operation can be performed relatively easily and quickly. Also, if the suction device is used for aspiration as well as multiple other functions (e.g., to hold, dissect, expose, and compress), there is no need for an additional port.

In the comparison of the uniportal and multiportal VATS groups, clinicopathological characteristics differed only for age, sex, and smoking history. The older patients more often were male and more often were smokers. Such older patients tended to prefer senior surgeons who performed multiportal VATS. Although this study was not a comparison between well-matched groups, there were no significant between-group differences in lung cancer characteristics.

This study has several limitations. First, the unmatched comparison groups, in which one surgeon performed uniportal VATS and multiple surgeons performed multiportal VATS, limited the comparability and generalizability of the outcomes. Also, the clinicopathological characteristics slightly differed between the groups. However, the objective was to demonstrate the outcomes when a young surgeon initially performs uniportal VATS instead of open thoracotomy or multiportal VATS. Therefore, rather than comparing features of uniportal and multiportal VATS, the intention was to show that even a novice surgeon can independently perform uniportal VATS. Second, this study was retrospective. However, the hospital has implemented a longstanding electronic medical record system in which the detailed medical records and surgical pictures were stored, so that all the data can be easily reviewed. Therefore, there was no limit for analyzing the surgical results. Future prospective and randomized trials are warranted to obtain more accurate results. Third, only limited conclusions can be derived from the results of this study of uniportal VATS performed by one young surgeon. Therefore, it is difficult to generalize the results of this study. In the future, as young surgeons actively practice uniportal VATS, it will likely become clearer that uniportal VATS is not a difficult surgical method to learn.

Reporting Checklist: The author has completed the STROBE reporting checklist. Available at http://dx.doi.org/10.21037/jtd-20-242.

Ethical Statement: The authors is accountable for all aspects of the work in ensuring that questions related to the accuracy or integrity of any part of the work are appropriately investigated and resolved. This study was approved by the institutional review board of Eunpyeong St. Mary’s Hospital at the Catholic University of Korea and individual consent was waived (Referral number: PC19RISI0157).

Cite this article as: Moon Y. Initial experience with uniportal video-assisted thoracoscopic surgery for the treatment of lung cancer performed by a surgeon who did not have previous experience performing multiportal thoracoscopic surgery: a single center retrospective study. J Thorac Dis 2020;12(5):1972-1981. doi: 10.21037/jtd-20-242